11 Oct Book of the Week — Delirium 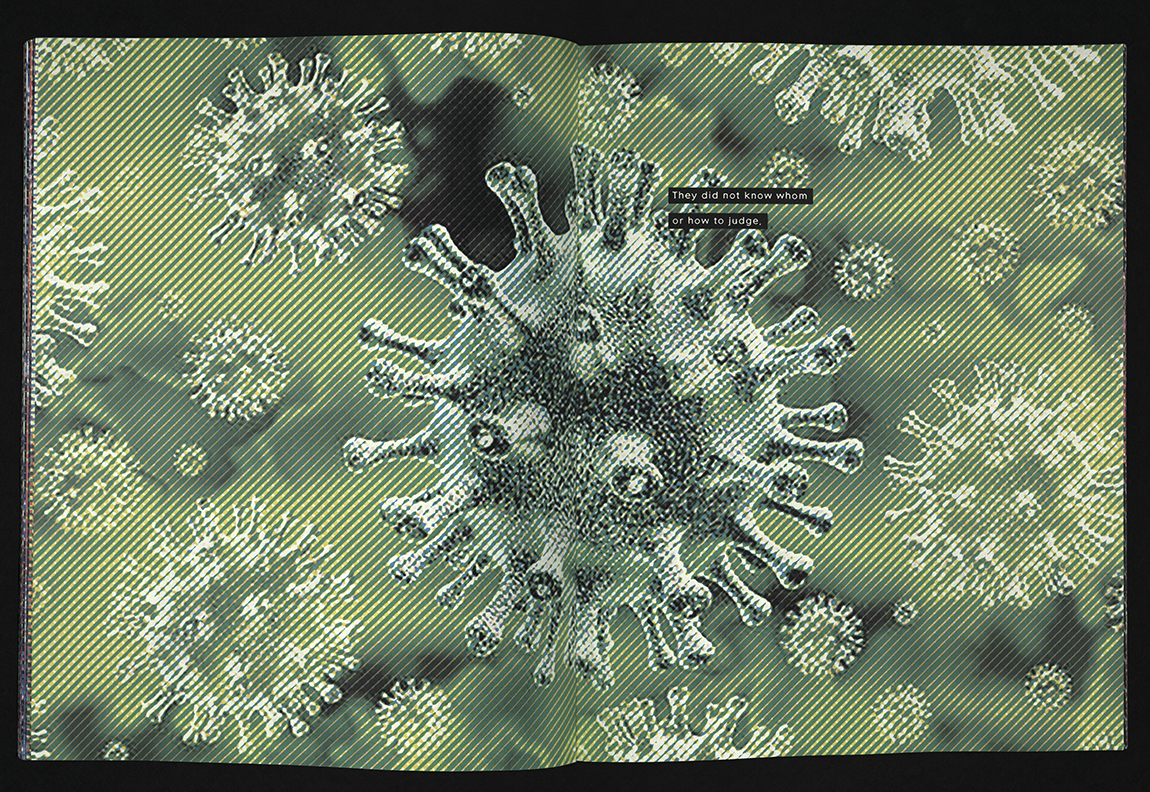 “…Everyone became anxious, and no one understood anyone else; each thought the truth was contained in himself alone, and suffered looking at others, beat his breast, wept, and wrung his hands. They did not know whom or how to judge, could not agree on what to regard as evil, what as good. They did not know whom to accuse, and whom to vindicate.” 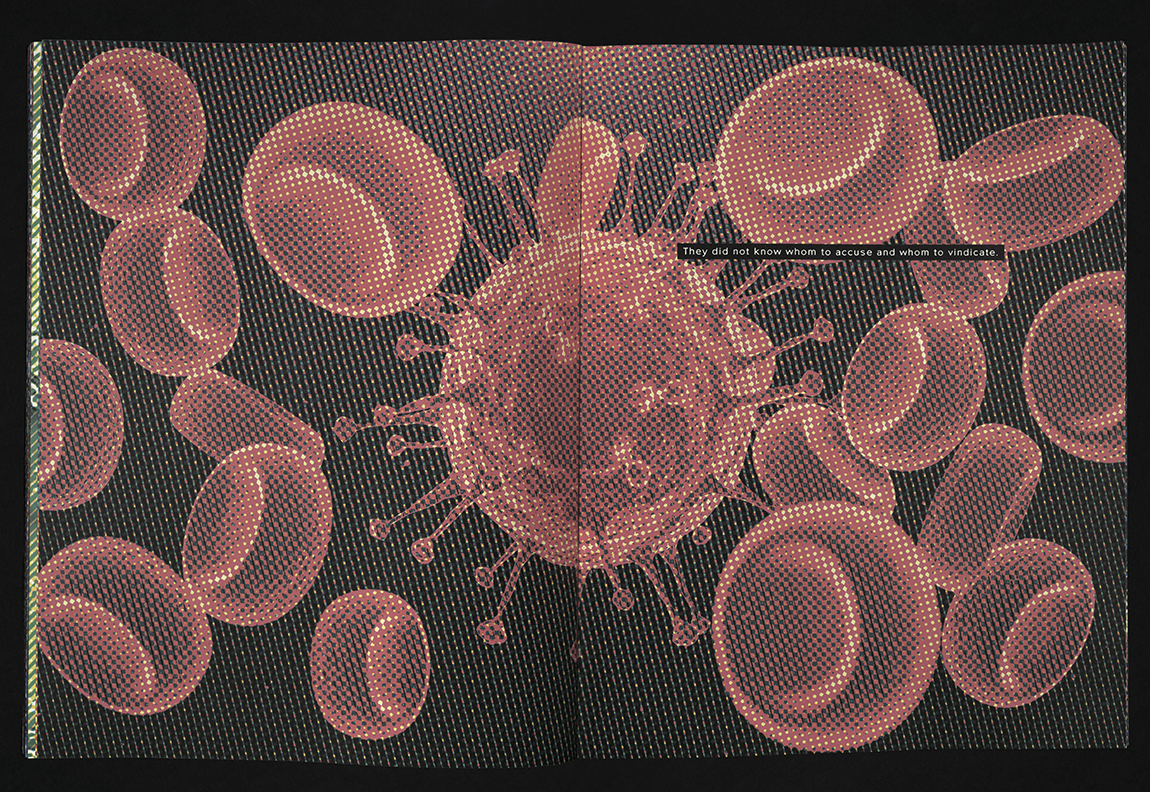 Fyodor Dostoyevsky’s 1866 novel, Crime and Punishment has often been cited as one of the supreme achievements in literature. The novel focuses on one central character, Rodion Romanovich Raskolnikov, as he suffers through a series of moral dilemmas and mental anguish. The impoverished former student creates a plan to kill and rob a pawnbroker, believing that if he could just free himself from poverty, he could go on to become a great man. The act, instead, exacerbates his problems and amplifies his feelings of confusion, paranoia, disgust, guilt, and horror. Toward the end of the novel, Raskolnikov has a feverish dream: 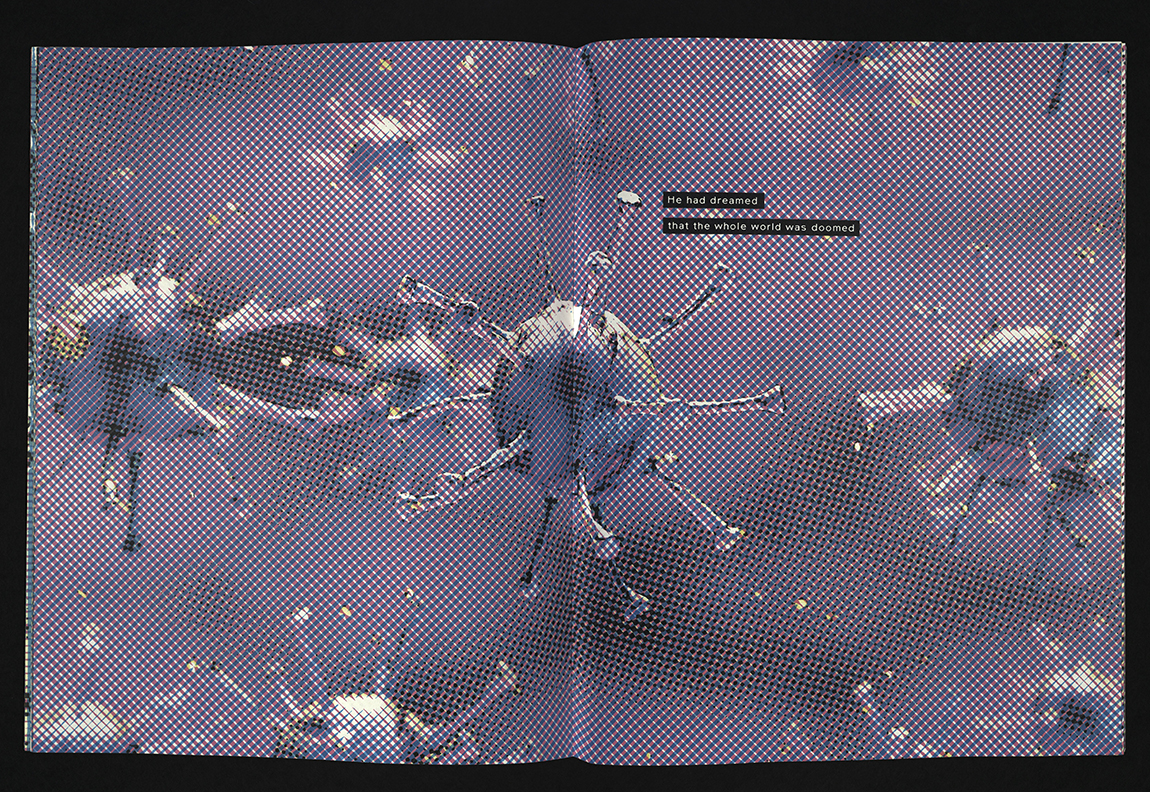 “He had dreamed that the whole world was doomed to fall victim to some terrible, as yet unknown and unseen pestilence spreading to Europe from the depths of Asia. Everyone was to perish, except for certain, very few, chosen ones. Some new trichinae had appeared, microscopic creatures that lodged themselves in men’s bodies. But these creatures were spirits, endowed with reason and will. Those who received them into themselves immediately became possessed and mad. But never, never had people considered themselves so intelligent and unshakeable in the truth as did these infected ones. Never had they thought their judgments, their scientific conclusions, their moral convictions and beliefs more unshakeable. Entire settlements, entire cities and nations would be infected and go mad. Everyone became anxious, and no one understood anyone else; each thought the truth was contained in himself alone, and suffered looking at others, beat his breast, wept, and wrung his hands. They did not know whom or how to judge, could not agree on what to regard as evil, what as good. They did not know whom to accuse, and whom to vindicate.” 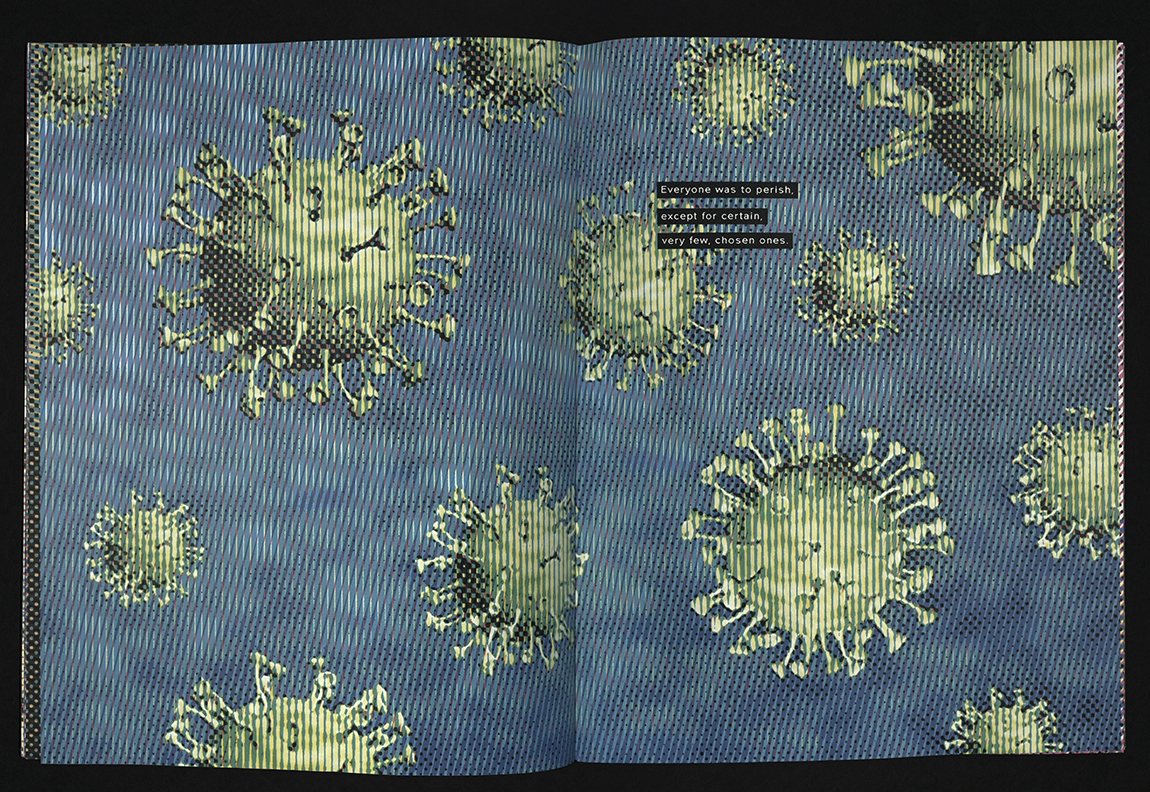 Book artist and printmaker, Philip Zimmerman, was struck by the paragraph for its prescience. He had already begun making a visual book reflecting on the early days of the pandemic, when media sources were inundated with images and illustrations of what a coronavirus looked like. Using the English translation from Richard Pevear and Larissa Volokhonsky’s 1992 edition, published by Vintage Classics, Zimmerman felt that the added text was powerful and appropriate. 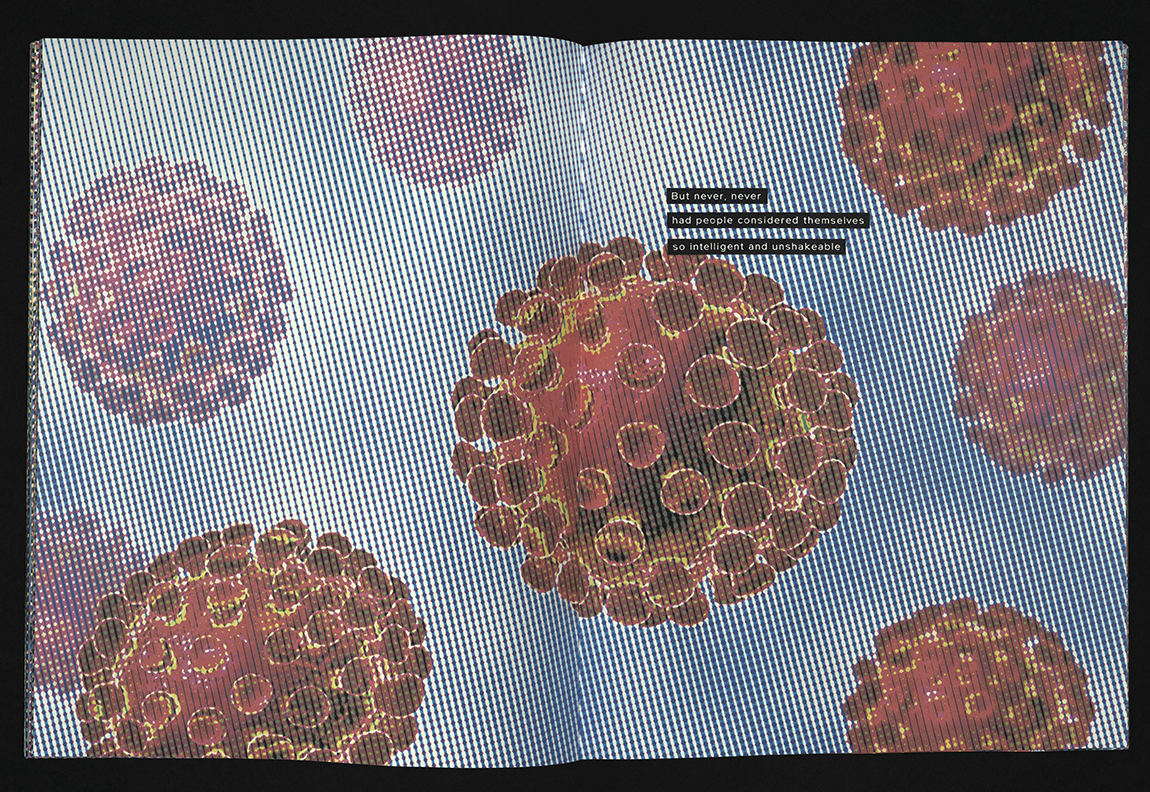 As images of the coronavirus were being revealed, columnists and essayists began publishing references to previous historic pandemics, such as the influenza pandemic of 1918-1919. There were also mentions of the numerous plagues of the medieval times, like the bubonic plague, or The Black Death, which killed half of Europe during the 14th century. Classical references about plagues date back even further: the Justinian Plague of 542 CE and the Great Plague in Athens of 432 BC. Looking to the past and the strength of human survival was a way to bring about hope and solace. It also aided in providing context to the current spread of COVID-19. Looking to present and contemporary fictions, however, recent films like Outbreak (1995), I am Legend (2007) and Contagion (2011) only added to the fear and fascination. 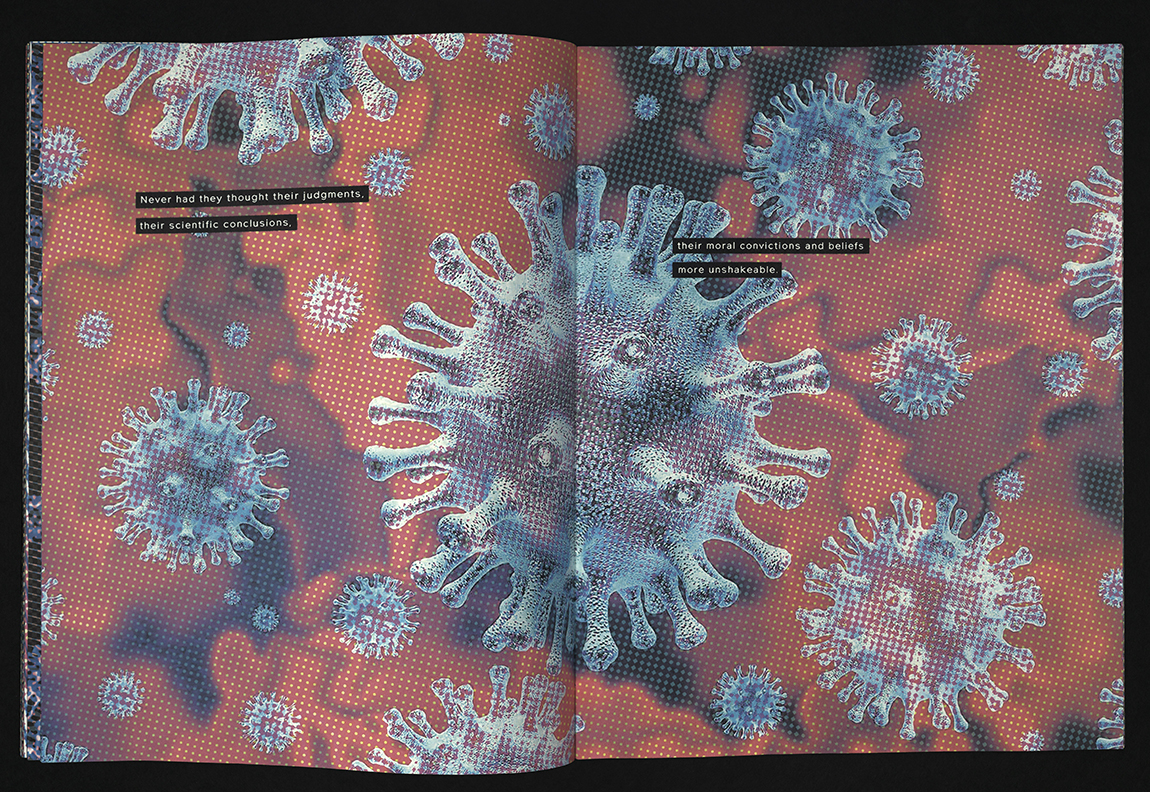 In Zimmerman’s eyes, many of the images produced of the coronavirus were stunning, surprisingly lush, and jewel-like. He was attracted to the saturated colors and, in the first four months of the pandemic, began collecting the images for a visual project. The original illustrations were significantly manipulated, changed in color and converted to large half-tone patterns — done by separating the four CMYK layers into discrete channels, converting each file into different dither or halftone patterns, and then reassembling them back into a new file with the four process colors. Zimmerman is no stranger to the use of manipulated images. Many of his previous works include similar processes. For Delirium, Zimmerman wanted large full-bleed images to be the theatrical visual accompaniment to the short text: hallucinogenic and furiously color saturated, and using the highly lurid language of Raskolnikov’s feverish nightmare. 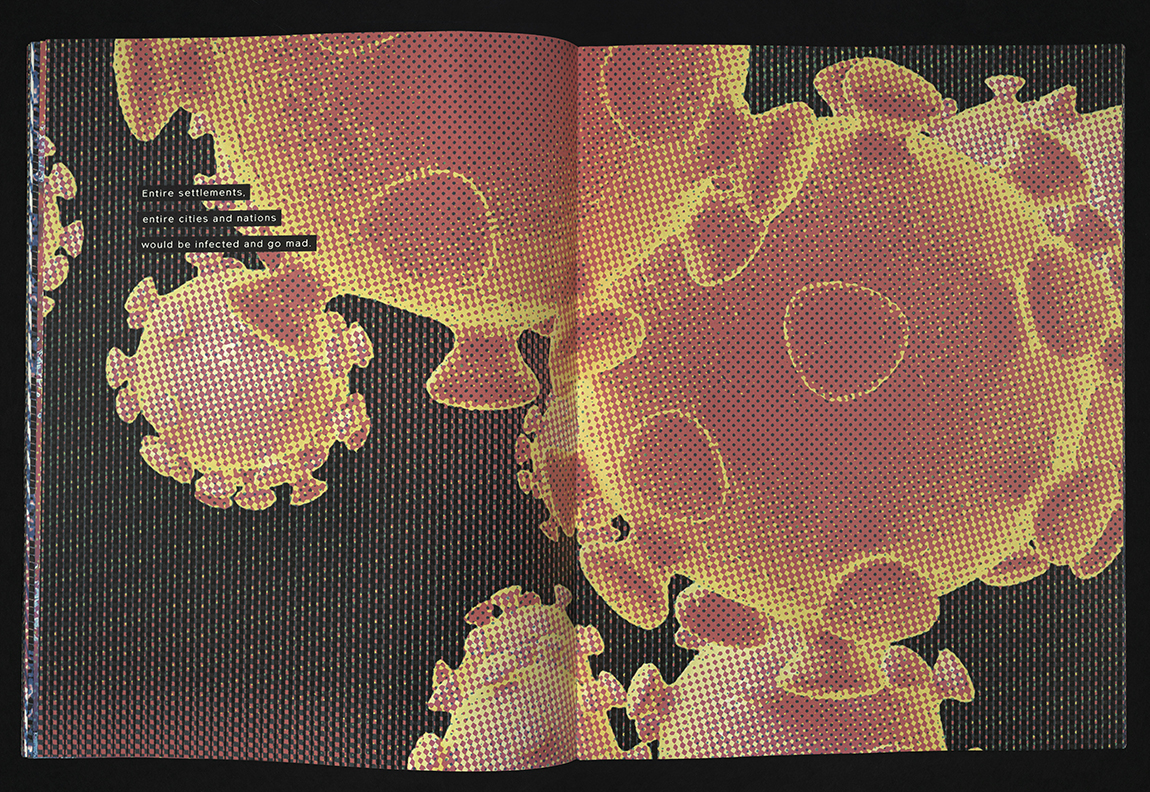 Delirium was printed in 2020, using archival pigmented inkjet onto Mohawk acid-free paper, 60 pages, in an edition of 30, handbound by the artist, and signed and numbered. The font used for the text is Northwoods, by Cultivated Mind Foundry in Vancouver, BC, Canada. The font was specifically picked because of its resemblance to the type used in a late 19th century schoolbook primer, while still appearing quite modern. Like many of their digital fonts, it was originally created with the careful strokes of a sign-painter’s paintbrush.

Delirium was recently selected as the winner of the best designed book of 2020 in the annual 50 Books/50 Covers National Competition hosted by AIGA — the professional association for design. 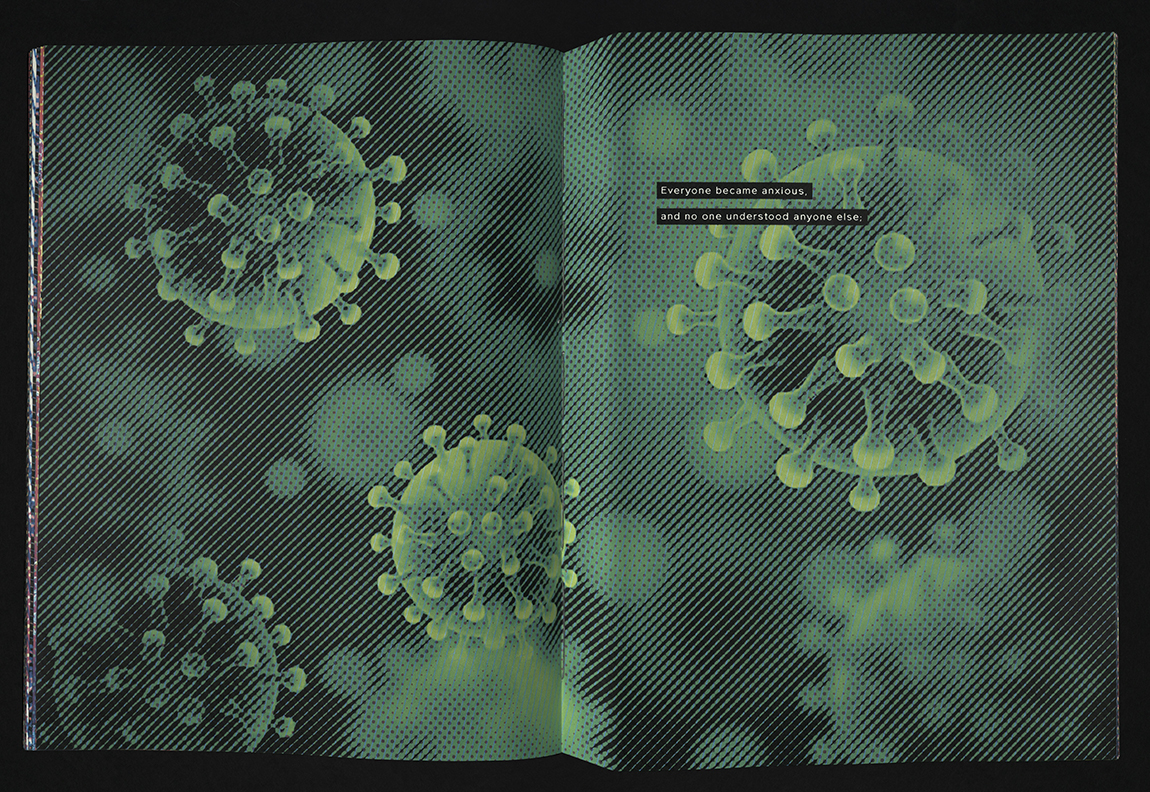