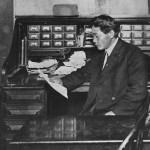 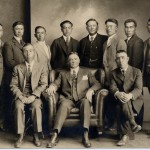 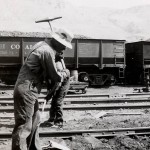 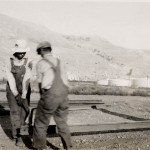 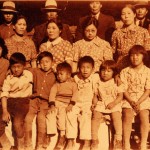 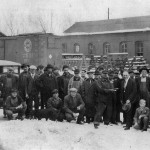 Railroad workers in front of the roundhouse in Carlin, Nevada where Kinsaku Inouye was a cell packer 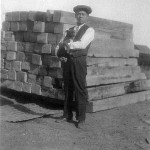 Mr. Itakura, machinist at the roundhouse in Carlin, Nevada 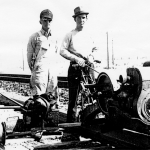 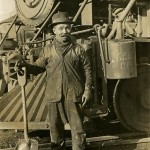 Tomojiro Asahara in front of Engine No. 190 in Helper, Utah circa early 1900s

The first transcontinental railroad was built by the Western Pacific, Central Pacific and Union Pacific Railroad Companies and officially opened on May 10, 1869 with the driving of the last spike in a ceremony at Promontory Point, Utah.

The Chinese were the first Asian immigrants to fill the need for labor on the railroad from 1849-1874 and were responsible for building much of the Central Pacific Railroad. However, due to anti-Asian sentiments, the United States passed the Chinese Exclusion Act of 1882 that shut down further immigration. Racism and rioting forced most of the laborers to return to China. This created a shortage and demand for labor to continue building the large network of tracks necessary to connect towns and territories to the new Overland Route. The rail system would eventually open up the country for travel and allow for supplies to be easily transported to remote locations in a quicker, more economical way.

Meanwhile, as the completion of the transcontinental railway was drawing near, political and economic sanctions in Japan coupled with America’s need for labor, influenced many young Japanese men to go overseas to seek their fortunes and new lives in “the land of opportunity”. Most were young single men who went to Hawaii first, before heading to the mainland for better job opportunities, some with intentions of going back to Japan after making their fortunes and some intending to make the United States their new home.   Labor agents, or “bosses” made arrangements to find jobs, housing, food and clothing for these men in exchange for a fee and percentage of their earned wages. After working on a section gang himself, Edward Daigoro Hashimoto found his way to Salt Lake City and established the E. D. Hashimoto Company in 1902. Nicknamed “The Mikado”, he furnished section gangs for the Western Pacific and Denver Rio Grande Railroads, along with miners for Bingham and Carbon County. By 1906, over 13,000 Japanese immigrants worked for the railroads. A few years later, at the urging of anti-Asian groups in the west, Japan was pressured and agreed to stop labor immigration to the United States under the Gentleman’s Agreement of 1908. Working on the section gangs was a harsh life, especially for those who now had families. Once they settled into communities, many left their jobs at the railroad to work at other trades such as farming or saved up enough money to start businesses of their own. Japantowns began to emerge in cities like Ogden and Salt Lake City where railroad stations were located.

Special Collections is actively collecting photographs, audiovisuals, manuscripts and other materials related to the history of Japanese Americans in the intermountain west to add to the Mitsugi Kasai Memorial Japanese American Archive. For more information about donations or accessing the collections, please contact Lorraine Crouse at lorraine.crouse@utah.edu.

A special thank you to the Union Pacific Foundation and Mitsugi Kasai Memorial Japanese American Archive for their funding of this exhibit and archive.