The children of Joseph and Evelyn, Norman, Stephen, Toby, and Mindy, have contributed papers, newspaper clippings, photographs, scrapbooks, and other treasures chronicling their father’s and family’s legacy. The collection is now available to the public through the Special Collections Department on level 4. The following Rosenblatt biological sketch was written by Roger Paxton, a retired U history professor and volunteer in Special Collections.

The history of the Rosenblatt family exemplifies the significant accomplishments which immigrants have contributed to American society. Nathan Rosenblatt, Joseph’s father, emigrated from Russia in 1880 and eventually made Salt Lake City his family’s home. He founded Utah’s first steel mill and created the American Foundry and Machine Company.

Joseph Rosenblatt was born in Salt Lake City, Utah on the 13th of January 1903. He graduated from Salt Lake high school in 1921. Continuing his academic career at the University of Utah, he completed two degrees within five years, one a B.A. graduating magna cum laude in 1925 and a second earning a L.L.B.J.D. in 1926. Active in campus politics, Rosenblatt served as the second vice-president of the Associate Students of the University of Utah’s (ASUU) executive council, chaired the student government board, co-authored the ASUU’s first constitution, and led an effort to raise money for the construction of the student union building. An early example of his life-long devotion to his alma mater was evident in 1927 when he gave the U of U two Native American head sculptures, which were placed in the football stadium.

Evelyn graduated from Ogden high school in 1927 and was an undergraduate student at Mills College and the University of Utah. Affectiionately known as Bamba, she was an excellent pianist. Joseph and Evelyn were married in Salt Lake City on the 4th of September 1930.

After graduating from the U, Joseph commenced working with his father and two brothers and in 1946 became president of Eimco, one of the many Rosenblatt family endeavors. Under Joseph’s leadership, Eimco emerged as a major international producer of underground machinery for the extraction of coal and minerals as well as for the building of highway and railroad tunnels. By the time of Rosenblatt’s retirement in 1964, company divisions had been established in France, Great Britain, Italy, South Africa, and Australia – making Eimco a multi-million dollar industry.  International recognition of his accomplishments occurred in 1955 when the honor of knighthood in the French Legion of Honor was bestowed upon him for his contributions to France’s mining industry. In 1997 Joseph was inducted into the U. S. National Mining Hall of Fame.

Joseph Rosenblatt’s retirement at the age of sixty-one did not signify the terminus of an industrious and a successful chapter in his life. For the ensuing thirty-five years he energetically pursued a variety of interests that elevated his role in community affairs. His endeavors and achievements in realms of business, politics, religion, education, health, and the arts were widely recognized and acclaimed. Prior to his departure from Eimco, Rosenblatt commenced a twenty-two year stint (1953-1975) as a director of the Federal Reserve Bank initially in Salt Lake City and subsequently in San Francisco.

Upon his retirement from board membership in 1975, the Federal Reserve System granted him a Distinguished Service Citation expressing gratitude for Joseph’s twenty-two year stint as a director. During the 1960s and the 1970s, Rosenblatt served on the board of directors of several investment, manufacturing, and railroad corporations.  Locally, he was elected in 1959 to the board of Utah’s Industrial Relations Council. These activities enhanced Joseph’s national reputation as a very well-respected leader in the financial and business worlds and resulted in the accumulation of several prizes, including Geneva Steel’s “Modern Pioneer” award and induction into the University of Utah’s and the Utah’s Junior Achievement Business Halls of Fame (1990-1991).

With a strong interest in the political arena, Joseph emerged as the prominent spokesman for a “Right to Work” law in Utah in 1955. Two years later Joseph established an organization whose purpose was to study the functioning of Salt Lake City government. Governor Calvin Rampton selected him in 1965 to chair the highly controversial “Little Hoover Commission,” the goal of which was to increase governmental efficiency. Joseph labored tirelessly on behalf of the commission whose work attracted the attention of several state governments which sought to utilize Utah reforms as a template for the streamlining of their governing institutions. Rampton’s confidence in Rosenblatt’s productive efforts were manifest in appointing him to leadership positions on the state Juvenile Court, the Management of Public Funds, and the Malpractice Evaluation committees. In 1977 the National Governors’ Conference recognized Joseph’s endeavors with an award for distinguished service to state government.  Joining the Salt Lake City Airport Authority in 1976, Rosenblatt chaired the board of directors for several years.

Joseph’s imprint on the religious life of Utah was substantial. His relations with the LDS church were based upon a respect for and admiration of Mormon authorities who held him in high regard. Illustrative of this relationship was the role which he played in the 1964 celebration of President David O. McKay’s life. Not only was he the keynote speaker, but he commissioned a symphonic tone poem which the Utah Symphony performed at the event. Joseph became well-known for his memorable prayers which he recited on numerous public and private occasions. A member of the Jewish faith, Rosenblatt in 1963 was instrumental in the formation of the Utah chapter of the National Conference of Christians and Jews whose goal was the eradication of religious bigotry and racism. The National Conference’s Utah Region honored Joseph’s meaningful service and sagacious leadership in 1994.

Other examples of Joseph’s commitment to the cause of religious tolerance could be seen in his generous contributions to the construction of a Federal Heights ward chapel (1962), the renovation of the Cathedral of the Madeleine (1989), and the planning of B.Y.U.’s Holocaust Conference (1994).

Joseph responded to Albert Einstein’s 1950 request for facilitating the raising of funds for the Israeli Institute of Science and Technology with a $10,000 gift. Additional financial support for this institute occurred in 1976 when a $100,000 grant endowed a chair in mechanical engineering. In 1959 Rosenblatt donated funds to create the Rosenblatt memorial cardiovascular laboratory at Holy Cross Hospital and during the late 1960s, he joined the board of trustees of the Catholic owned Holy Cross Hospital and was appointed to the board of the Episcopal operated Rowland Hall St. Mark’s school.

Rosenblatt’s philanthropic exploits were exemplary and his public service record was legendary.  These activities, affecting the lives of many Utah citizens, were markedly visible in the areas of education and health. As a proud alumnus of the University of Utah, Joseph was a prominent university benefactor. One of the recipients of Rosenblatt’s largess was the U’s medical school. Over the span of several decades, funds were provided to finance the university hospital, cardiac rehabilitation, student scholarships, post-doctoral fellowships, the OBGYN department, and the Huntsman Cancer Institute. Other parts of the campus were rewarded with Rosenblatt’s beneficence. Scholarship grants were founded in the departments of political science and biology, the college of fine arts, and the graduate school of education. Donations were given to the college of business, the department of music and the department of family and consumer studies. Joseph endowed a chair in mechanical engineering in 1995.

In honor of his parents, Joseph established in 1983 an annual prize for excellence in teaching, research, and administrative efforts. Four years later he created an award to recognize excellence in the teaching of business, management, and entrepreneurship. University presidents also benefitted when in 1986 the Rosenblatts decided to transfer the ownership of their Federal Heights property to the University of Utah. The home became the presidents’ residence in which students, faculty, and members of the community socially and intellectually interacted. President Bernard Machen honored Joseph Rosenblatt posthumously in November 1999 with the presentation of the “Spirit of Philanthropy Award.” The Rosenblatt legacy in the advancement of public education was not limited to that of higher education. Substantial monetary and technological assistance was offered to elementary and high schools in Utah and California.

Evelyn and Joseph Rosenblatt enthusiastically subsidized Utah’s arts community. A prime example of their love of the arts could be seen in their support of the Utah Symphony orchestra.  The Rosenblatt’s personal and financial contributions commenced in the 1940s and continued throughout the remainder of their lives. Many people admired Evelyn’s work on the Utah Symphony Guild while Joseph, a member of fifty plus national and local boards and committees, served on the Symphony’s board of directors. 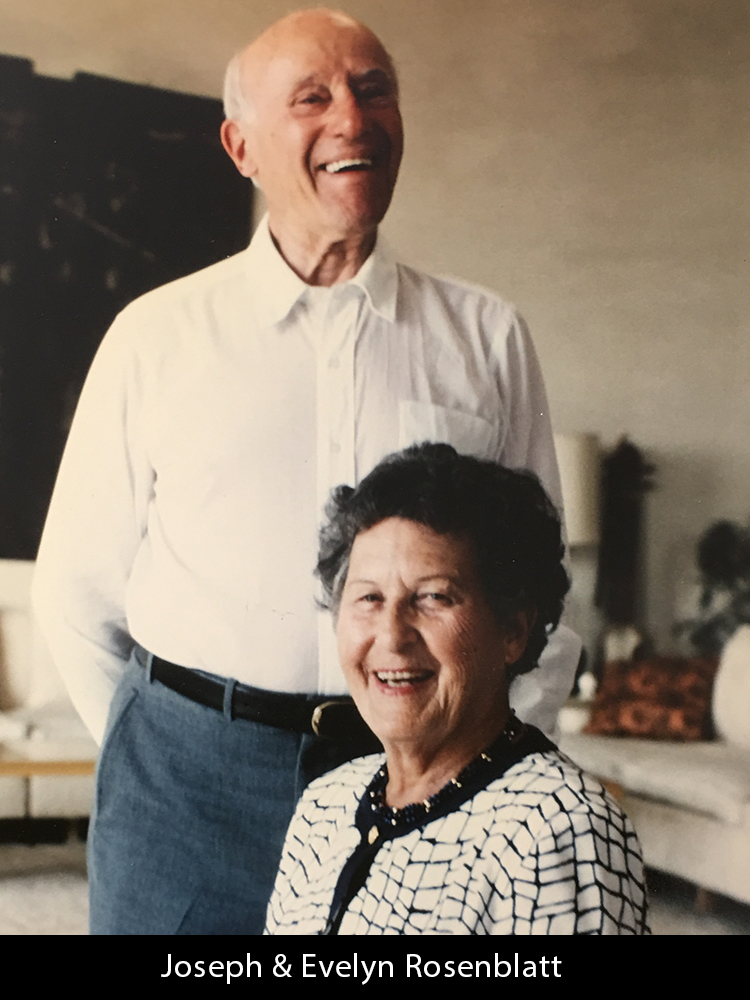 To honor their mother’s ninetieth birthday, the Rosenblatt children established a half million dollar endowment the purpose of which was to showcase annually a highly talented young artist in the classical musical world. While decorating their home with beautiful art objects, they funded generously the U of U’s Museum of Fine Arts so that the general public could appreciate visually the creations of major artists. Another campus entity which benefitted from the Rosenblatt charitable trust was the Pioneer Memorial Theatre.

Signs of the public’s respect, affection, and appreciation for Joseph Rosenblatt’s extraordinary accomplishments and activities appeared in a string of awards which were bestowed upon him over the span of several decades. Westminster College, the University of Utah, and Brigham Young University conferred upon Rosenblatt the honorary degrees of Doctor of Laws, Doctor of Humane Letters, and Doctor of Public Service in 1959, 1969, and 1977 respectively. The U of U recognized him as the Founder’s Day Distinguished Alumnus (1968) and the College of Law’s Alumnus of the Year (1994).

In 1995 Joseph received the University of Utah’s National Advisory Council Distinguished Service Award. Brigham Young University commended Joseph and Evelyn Rosenblatt for their outstanding lifetime of devotion to Jewish-Christian understanding, the United Way of the Great Salt Lake Area added them to the rolls of the Golden Spike Leadership Circle, and the Great Salt Lake Council presented them with a plaque which thanked them for their assistance to America’s youth (1995-1996). Additional accolades included the American National Red Cross World War II meritorious service award to Evelyn in 1946 and a Utah Hospital Trustee Service award to Joseph in 1983.