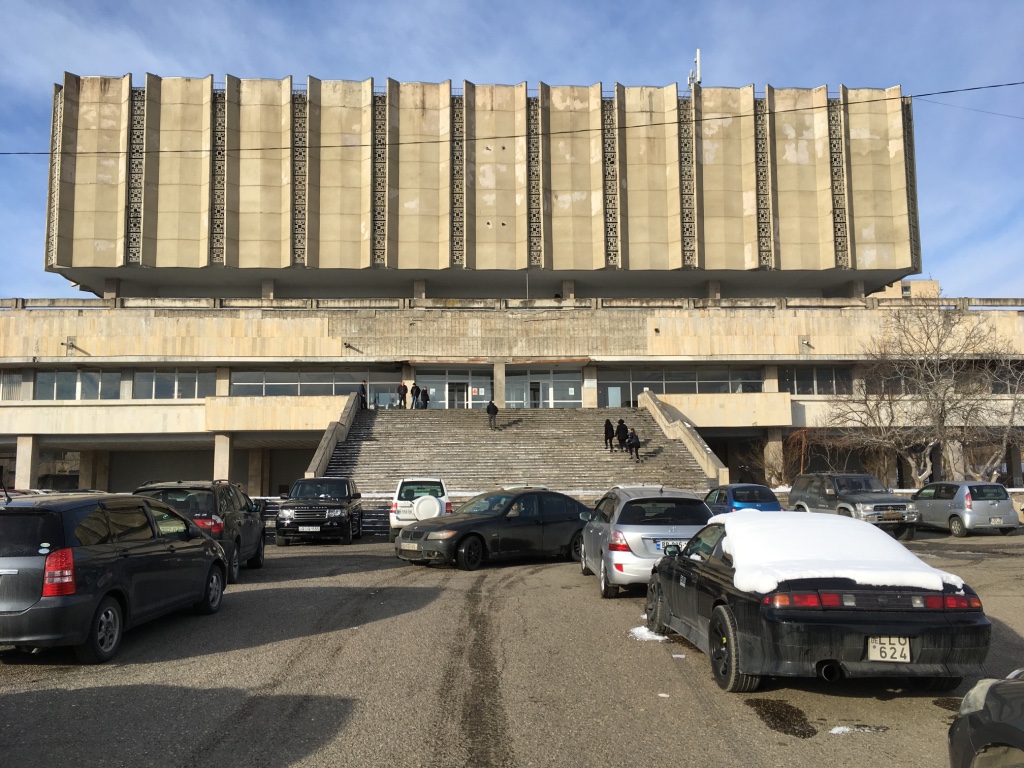 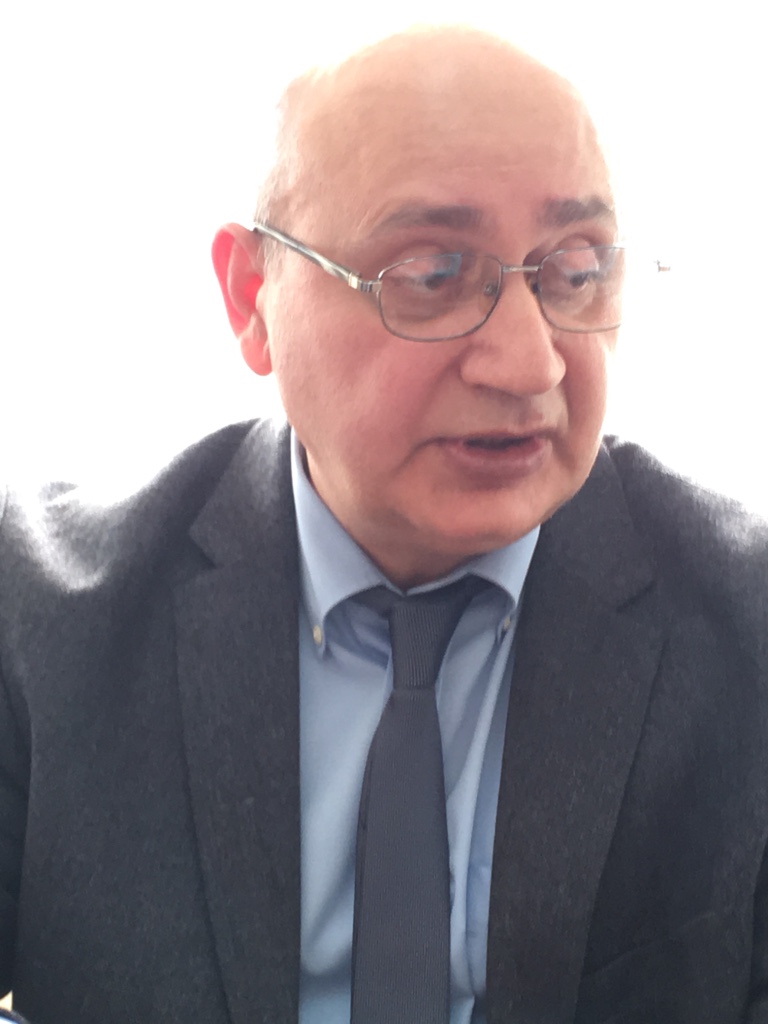 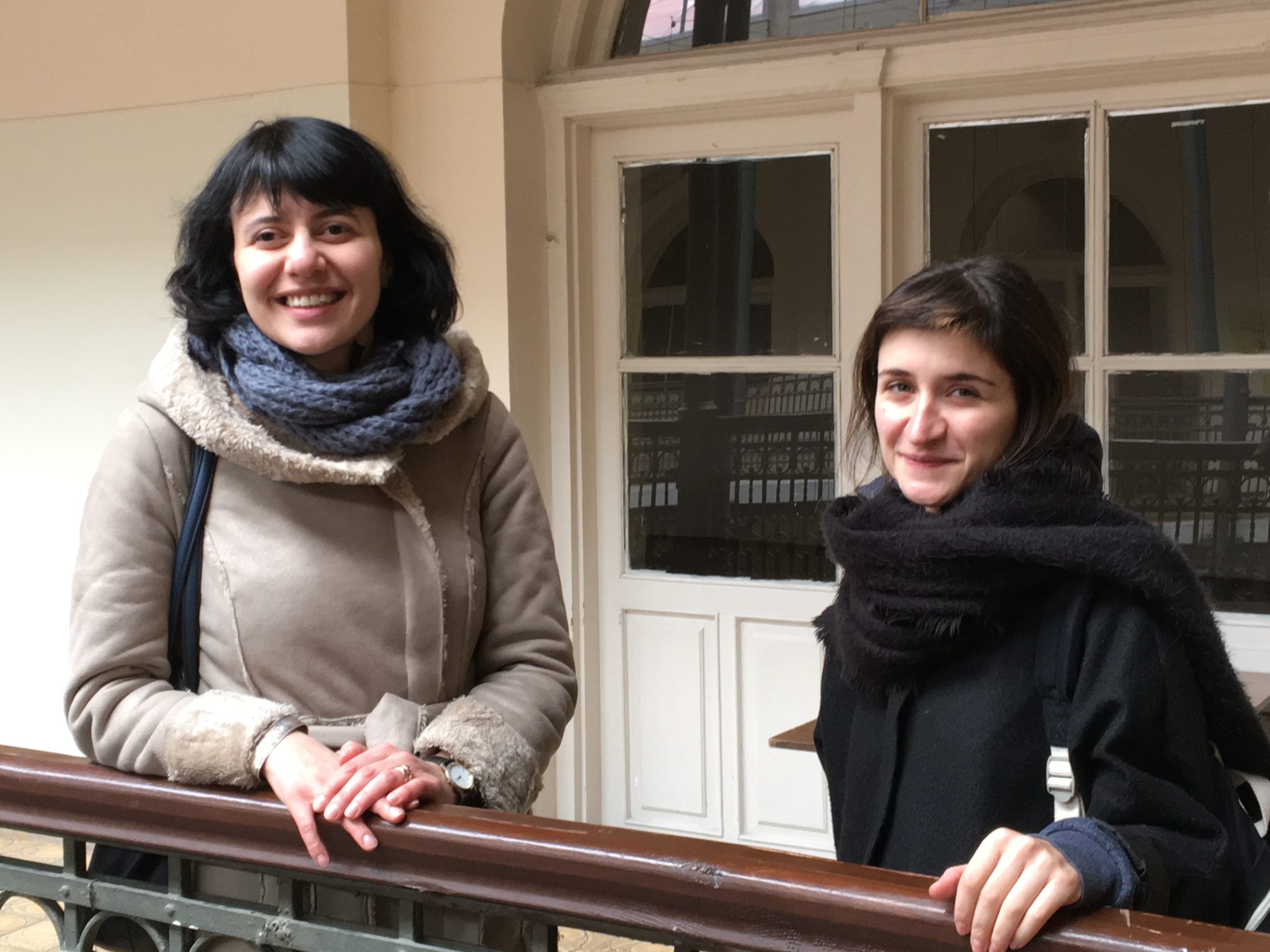 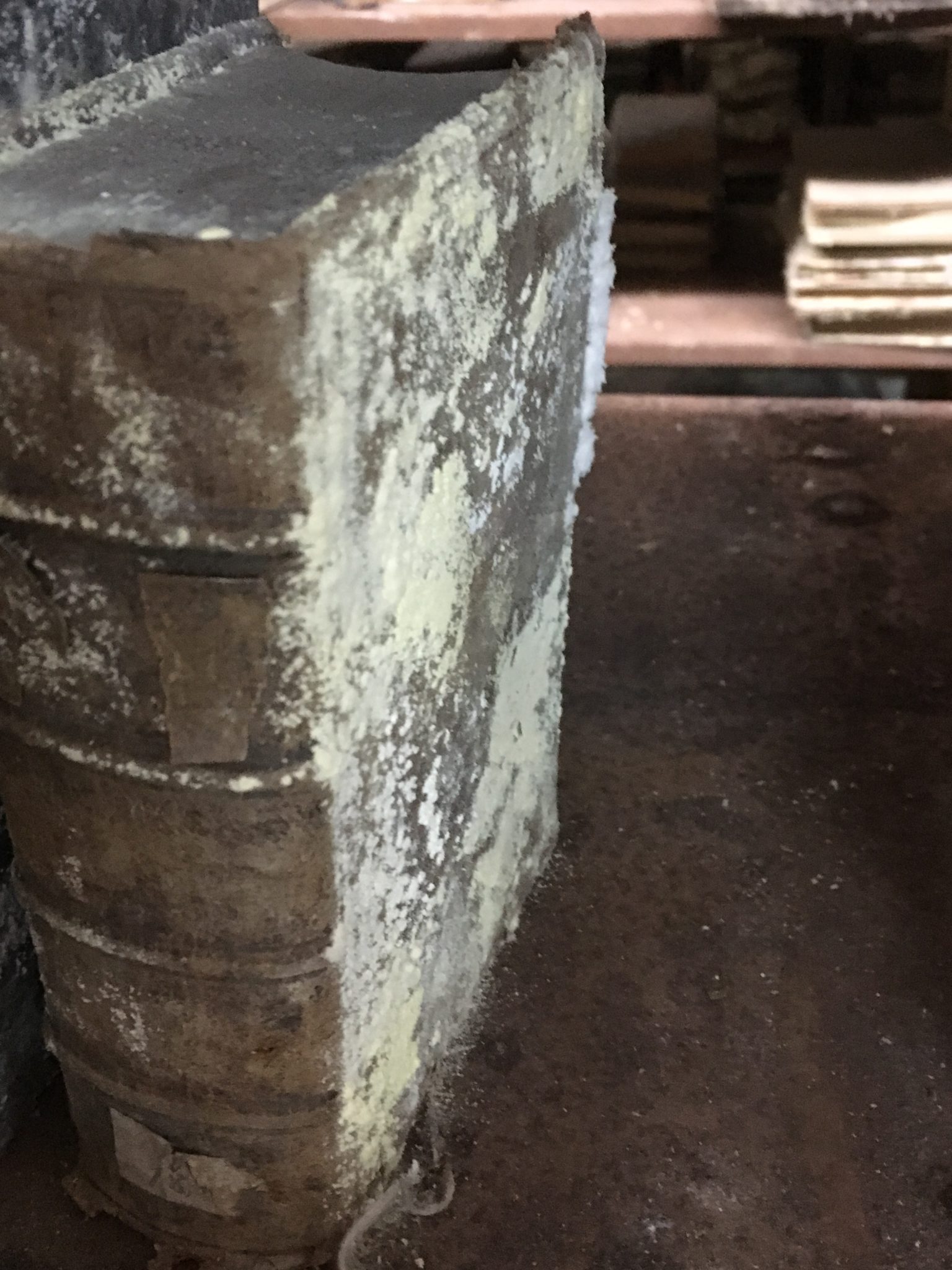 An example of a 16th century, mold-covered binding from the locked storage room in the basement in Tbilisi State University Library. 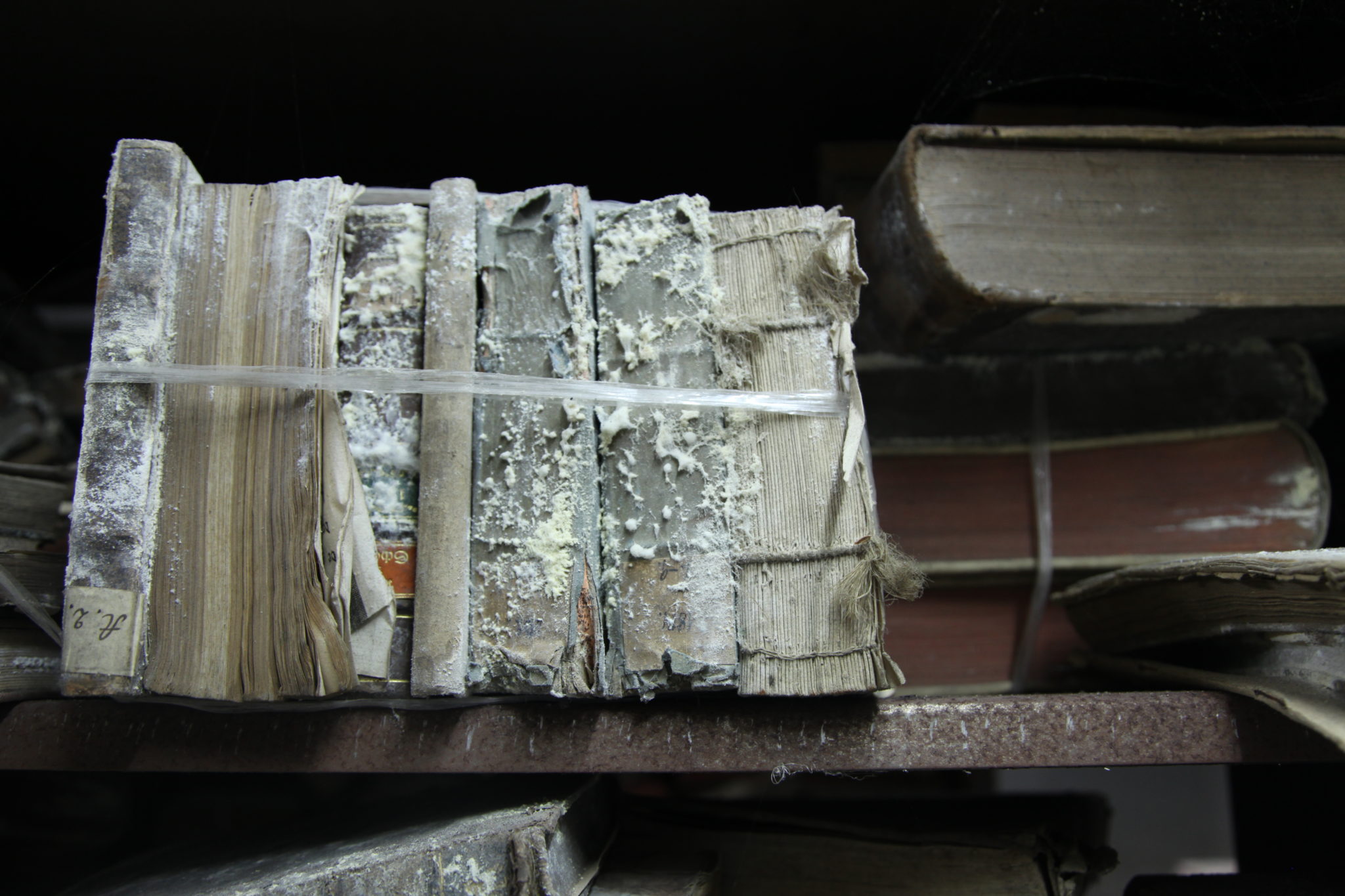 A group of molding rare books stored in locked room in the basement of Tbilisi State University Library.

A detail of the mold on the rare books stored in locked room in the basement, Tbilisi State University Library. 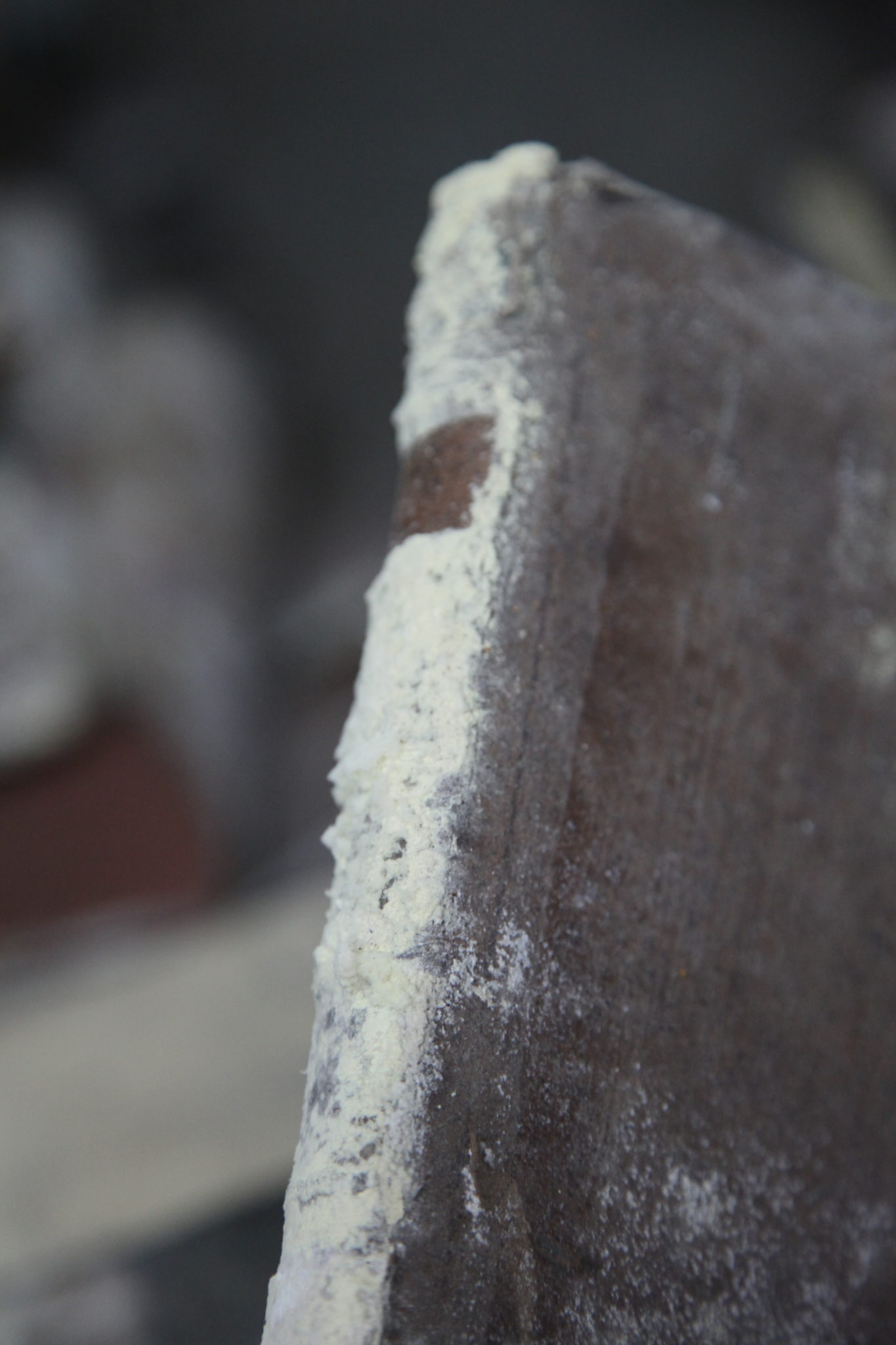 An example of rare book with extensive mold growth on the spine in the basement, Tbilisi State University Library. 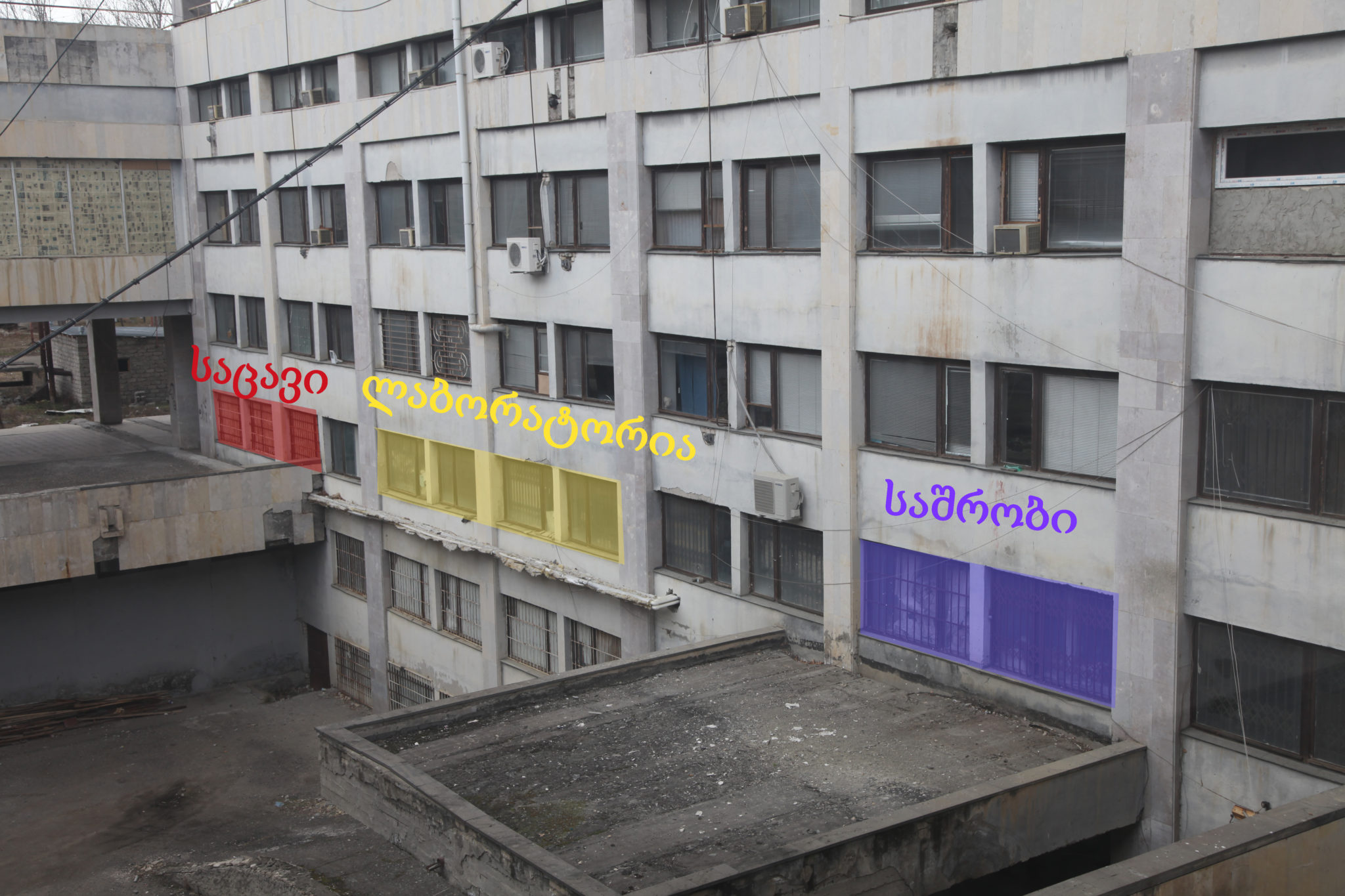 “When we think about some of the authors of these books – people like Galileo, Euclid, and Darwin – we realize how much they gave of themselves to create such works. It is a reminder about how terribly important it is to preserve their legacy in Tbilisi.”

It all started with a tour of the library’s Preservation Department led by the Marriott Library’s Preservation Head, Randy Silverman. The group of academics was visiting from the country of Georgia, a post-Soviet state, when the subject of dealing with a mold outbreak affecting rare books came up. That was in 2012, prompting the very beginning of Randy’s journey to Tbilisi State University Library to consult on how to save 80,000 rare books.

These books had seen some history. They had belonged to Germany prior to WWII and were confiscated by the Soviet Army at the end of the war. Written in several different languages including Latin, German, Russian, and French, some of the books dated back to the 16th century. The one thing they had in common was they all were in dire need of attention, as a mold problem had been festering in the library for more than 15 years. Randy Silverman looking at some of the 80,000 moldy rare books stored in the locked storage room on floor 0.
Photo Credit: Mariam Kalkhitashvili

Randy is not only a book conservator with more than 30 years of experience mending and caring for books, but he also has done his share of disaster remediation. He spent time as a member of the Heritage Emergency Assistance Recovery Team (HEART), salvaging historic and cultural artifacts and writing emergency assistance grants in Mississippi following hurricanes Katrina and Rita in 2005. He continues to serve as a member of the American Institute for Conservation’s National Heritage Responders.

“Katrina was devastating and immediate, a raw wound,” explains Randy. “Tbilisi State University was a mature, decade-old mold bloom I had never seen anything like before. These incredible books were absolutely covered in inch-thick white and black mold growth. The leather bindings become more damaged with each passing day, while the paper contents remain undamaged. It really was distressing to see rare books in such degraded condition.”

So how does mold work? When relative humidity levels reach above 65%, mold becomes active and spores proliferate. During the winter months, the mold becomes dormant and desiccates. But with summer rains and elevated indoor humidity levels, the mold again activates and continues to feed on leather and paper bindings. In the case of Tbilisi State University Library, the mold resulted from water leaking into the 500,000 square-foot concrete building from three different sources. The library’s two floors underground remain moist because groundwater is seeping through the concrete. This elevates the building’s relative humidity, especially during Tbilisi’s rainy, summer months. Also, two vertical plumbing chases situated inside stairwells actively leak inside the walls, causing significant moisture in the open spaces between floors. And lastly, the roof drainage system lacks downspouts, so rainwater is adding to the groundwater problem at the building’s perimeter.

With all the water in and around the building, relative humidity levels rise above 80% in the summertime, causing the mold bloom to reactivate seasonally. It is flourishing beyond measure within the locked, dungeon-like rare book storage rooms.

During Randy’s nine-day visit to Tbilisi, he worked with librarians, conservators, architects, and engineers to create a plan for halting the mold, cleaning the books and creating a mold-free environment for their long-term preservation. The interdisciplinary team included the Library Director Zurab Gaiparashvili, Paper Conservator (Tbilisi State University) Mariam Kalkhitashvili, and Manana Tevzadze, Chair of the Georgian National Committee of the Blue Shield (Blue Shield is an international agency charged with helping to preserve cultural patrimony). Since his return to the U.S., Randy has also sought advice from Kirk Lively, Director of Technical Services at Belfor USA (a disaster recovery firm), and Drs. Jean Cox-Ganser and Ju-Hyeong Park of the Respiratory Health Division, National Institute for Occupational Safety and Health (NIOSH), Centers for Disease Control and Prevention (CDC).

While Tbilisi State University has very little money, the cure for the problem seems quite achievable. The building’s water problems must be addressed first to stop the mold growth. This can be accomplished by repairing the plumbing, installing downspouts to direct roof drainage away from the building, and constructing an architectural “gallery” on three sides of the building. A gallery is a meter-wide walled trench that separates the building’s underground two floors from the surrounding earth and provides air circulation through a grated covering to keep the walls dry. The moldy book storage rooms could then be dried with commercial dehumidifiers.

Workers will need to wear Powered Air Purifying Respirators (PAPR) and other personal protective equipment when working in the moldy rooms to vacuum books, shelving, walls and ceiling with commercial, clean-room vacuum cleaners containing High Efficiency PArticle (HEPA) filters. The books would then be removed to dry storage spaces within the library for further cleaning by conservation staff using HEPA-vacuums and microfiber cloths, and the moldy rooms thoroughly washed with warm soap and water. Opening windows to let a little fresh air into the building will also help, as will a thorough HEPA-vacuuming of the entire building.

Thinking back to his experience, Randy comments, “When we think about some of the authors of these books – people like Galileo, Euclid, and Darwin – we realize how much they gave of themselves to create such works. It is a reminder about how terribly important it is to preserve their legacy in Tbilisi.”

NOTE
The preservation assessment was made possible by a successful Cultural Emergency Response grant from the Prince Claus Fund (Amsterdam). If further funding can be secured, Randy will continue to help conserve this treasure trove of rare books. An example of an architectural Gallery, in this case, a glass-covered viewing case situated at sidewalk level in Tbilisi, but an idea easily adapted to create an air space separating the surrounding earth from the underground walls of the library building. Photo Credit: Randy Silverman A book published in Wittenberg, Germany in 1543 with no mold staining on the title page, a typical scenario despite the extensive mold growth on the bindings of the rare books. Photo Credit: Randy Silverman