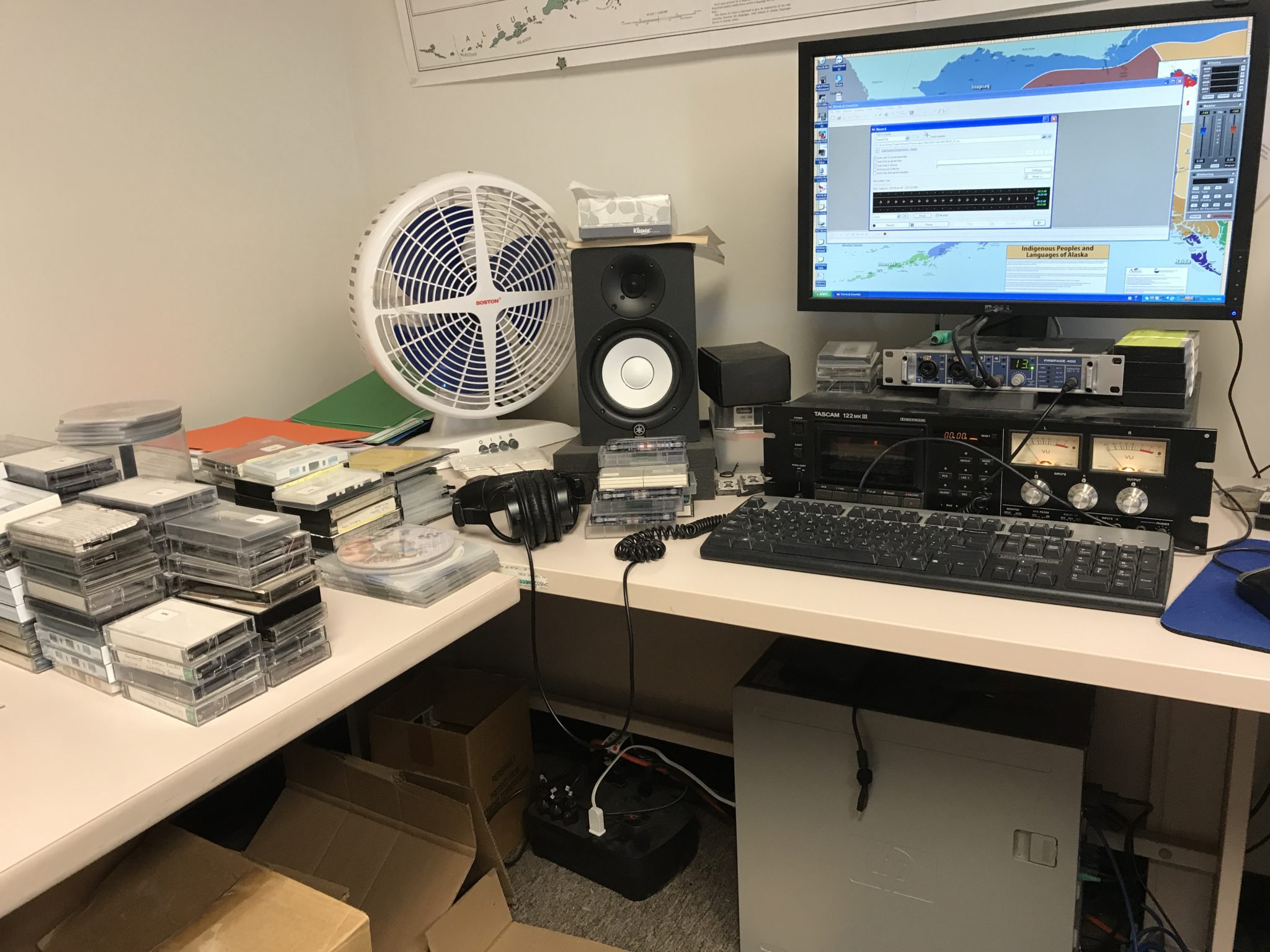 Need Help – Will Travel. That could be Randy Silverman’s motto.

Randy, Head of Preservation at the Marriott Library, recently traveled to Kotzebue, Alaska to consult on saving hundreds of old cassette tapes holding some of the Northwest Arctic’s most valuable oral histories.

Randy met with individuals of the Aqqaluk Trust Audio Preservation Project (ATAPP), which is developing a strategy to centrally coordinate the preservation of (and provide access to) 700 unique recordings of Alaska Native Elders from the northwest region of Alaska. Recorded on cassette tapes in Native Iñupiat language during the 1960s through the 1980s, these recordings document Iñupiat Elders conducting what they termed “the Spirit Program.” The Spirit Program documented reminisces of family life in small towns above the Arctic Circle, descriptions of essential indigenous survival skills such as hunting techniques, narratives of clothing production and food preparation traditions, and deliberations about long-established principles of ethical behavior. The outcome of these years of discussions are the present-day values statement of the Iñupiat people.

Taken from a story that appeared in the “Arctic Sounder,” Aqqaluk Trust’s Iñupiaq Digital Technician Hans B. Nelson comments: “There are oral traditions, stories about hunger or starvation, hunting and gathering practices, animal migration. They’re all stories from the first of our Elders that actually were able to pass on this history in this way.”

Because of a NEH Preservation Assistance Grant awarded to the Aqqaluk Trust, Randy was invited to provide consultation and assess the condition of the tapes. “They are one-of-a-kind tapes. They are in the Iñupiaq language and they’re of deep cultural significance because of their role in preserving the history of the region,” explains Randy. “They have limited lifespan and we’re concerned if these tapes aren’t duplicated to alternative media soon, the information could be lost.”

While Randy was in Kotzebue, he held a workshop to teach members of the community how to preserve their cultural heritage – items belonging to their families. “People sometimes bring me personal items to look at – newspaper clippings, photographs from their grandparents, a christening gown – these kinds of objects have a story and a meaning behind them,” says Randy. “Storing them in a controlled environment in archvial-quality paperboard boxes in the home can be part of the process of preserving everyone’s cultural heritage.” Next steps? Now that the preservation assessment is completed, the Aqqaluk Trust will be applying for a NEH Humanities Collections and References Resources Grant to help support the cost of using a reputable commercial digital media provider to digitize the cassettes to the highest standards. The digital media will be used locally in Kotzebue by contemporary Iñupiat Elders who will create metadata descriptions in English of the recorded contents and define which recordings can be made publically accessible and which, because of the sensitivity of the contents, will require permission for access from the present-day Elders’ Council. The translations will be used by library catalogers at the University of Alaska Fairbanks who will create electronic item-level and collection-level records following Library of Congress guidelines for bibliographic control. These catalog records will be loaded into WorldCat, the world’s largest library catalog, to enable discovery by interested researchers. Permanent universal access to these unique digital recordings will be provided by the Internet Archive. The original historic cassettes will then be stored in the Alaska Moving Image Preservation Association’s environmentally controlled magnetic media vault (44º F/35 % RH) for ideal long-term storage.

The Aqqaluk Trust Audio Preservation Project will provide state-of-the-art digital preservation and access to 700 at risk, previously inaccessible, historic audio tapes, and preserve the original tapes. It is hoped this project will serve as a model for a later project to preserve unique films owned by the Aqqaluk Trust, and as a sustainable model for other rural indigenous Native Alaskan groups seeking to develop strategies for preserving and make accessible similar caches of unique audio and visual recordings.