24 Jul 175 Years Ago Today — Journey of the Utah Pioneers

Posted at 12:00h in Book of the Week, Rare Books by lyuba 0 Comments
3 Likes
Share

“Streets and sidewalks were moving masses of humanity — wide awake to the significance of pioneer week… There were caravans, expeditions from south and west, lean, brown cowboys in chaps and spurs… There were flags, streamers, festoons and wreaths,” 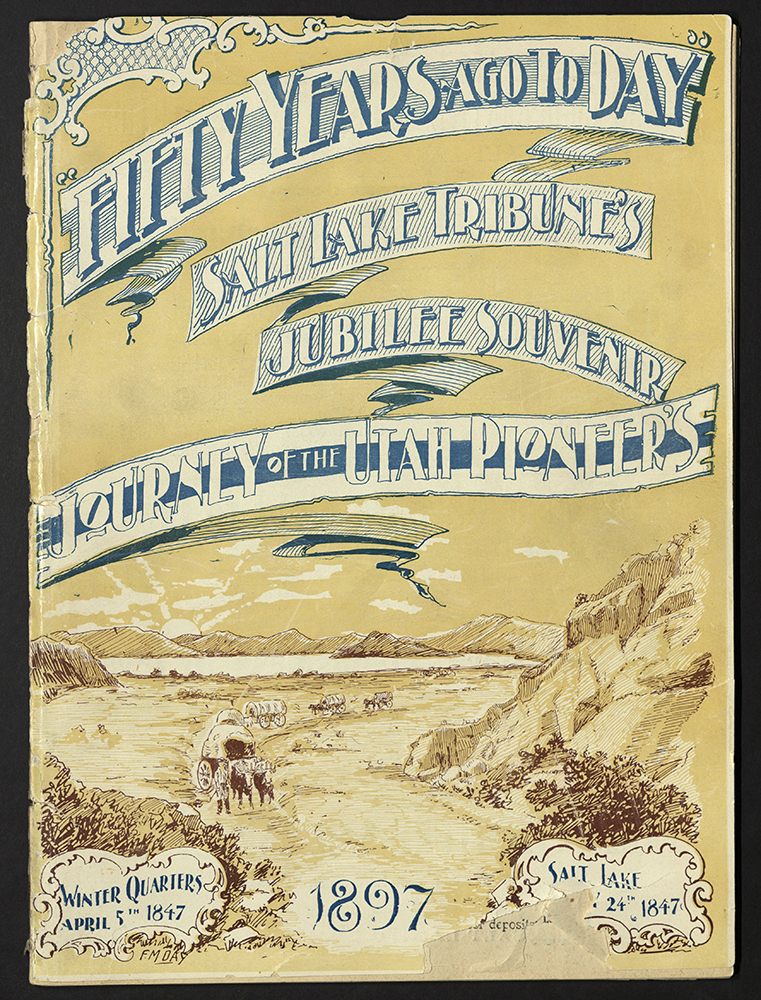 Every year on July 24th, Utah celebrates its history with a holiday that marks the Mormon pioneers’ arrival in the Salt Lake Valley in 1847. The first Pioneer Day was commemorated in 1849 with canon fire and a performance by the Nauvoo Brass band. Later, several thousand members of the Church of Jesus Christ of Latter-Day Saints assembled into their respective wards. Led by their bishops, they then marched onto the grounds of Temple Square. Each ward sat together under a bowery that had been specially constructed for the occasion. It is likely that this had been the largest assembly of LDS members throughout the church’s then nineteen-year history. 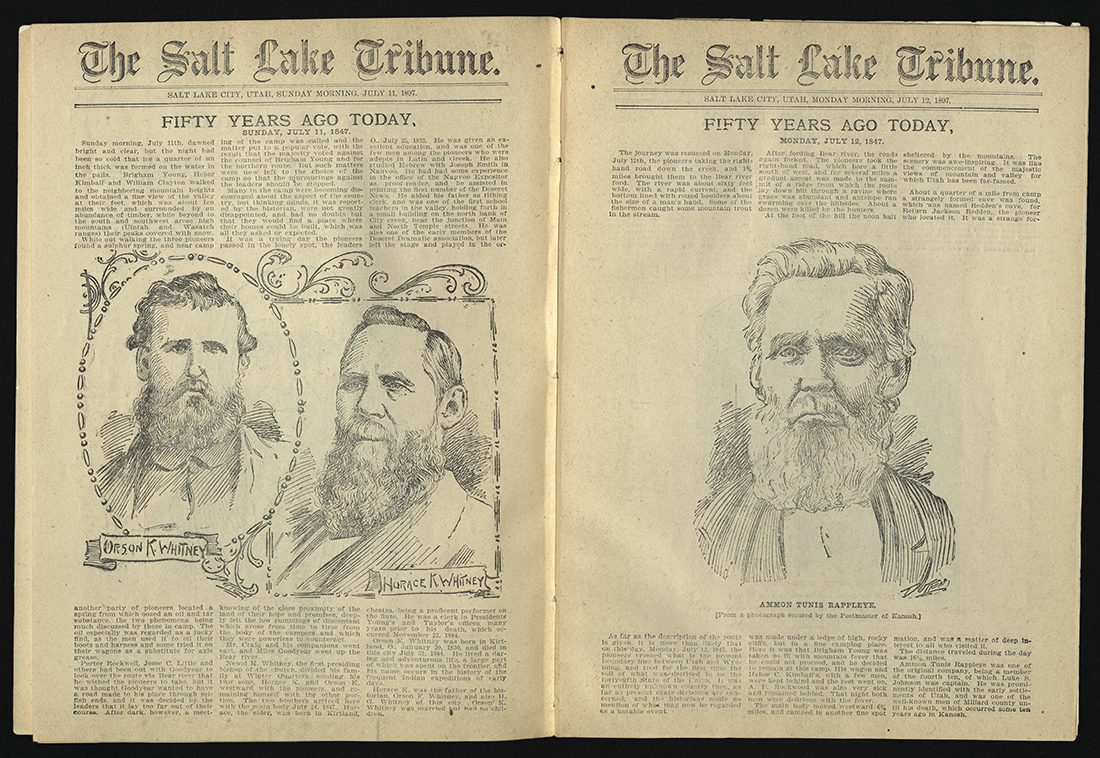 Pioneer Day commemorates the arrival of Brigham Young and the first group of Mormon pioneers into the Salt Lake Valley. The journey began in Omaha, Nebraska — or Winter’s Quarters — where some ninety LDS settlements had been established along the Missouri river. The settlements were only meant to be temporary homes on the way to Salt Lake Valley but, despite this, church members had established successful farms and businesses and even published a newspaper. It was here that Brigham Young and other church leaders spent time planning and preparing for the arduous trek. It has been said the Young was following the message of Joseph Smith who had said prior to his death that his followers “would yet be driven to the Rocky Mountains, where they would be able to build a city of their own, free from all molestation.” 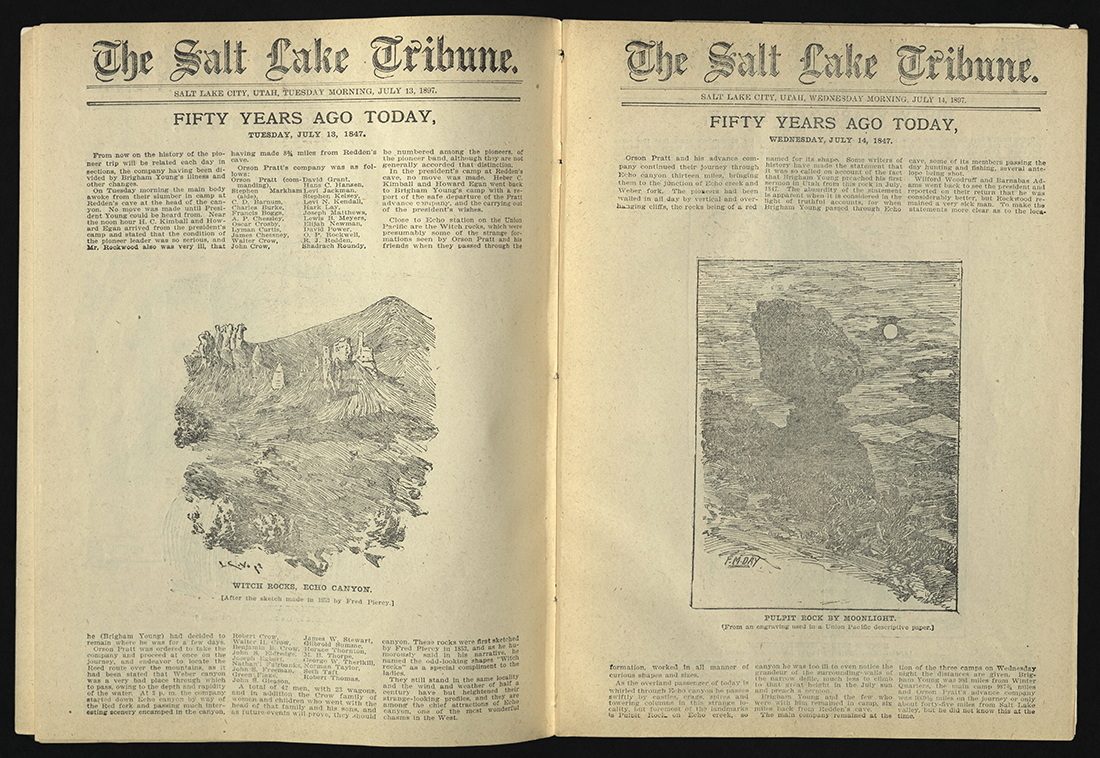 Of course, the Mormon Pioneers were not the first people to settle in the Great Basin region. Several indigenous tribes, such as the Utes and Paiutes, had long called the mountainous valley home. In the eighteenth century, two Franciscan priests, Atanasio Domínguez and Silvestre Vélez de Escalante, traveled through the area in an attempt to find an overland route from Santa Fe, New Mexico, to their Roman Catholic mission in Monterey. Mountain men and trappers such as Peter Skeen, Kit Carson, and Jim Bridger were trading in the area. Additionally, famed explorers including John C. Fremont, Benjamin Bonneville, and Howard Stansbury already mapped out much of the landscapes. There was also the Donner-Reed Party, who arrived in Utah the year before the Mormon Pioneers. They had blazed and bushwhacked the trail through the Echo, Weber, and Emigration Canyons, which added an extra two weeks to their journey to California. If only they made it sooner. 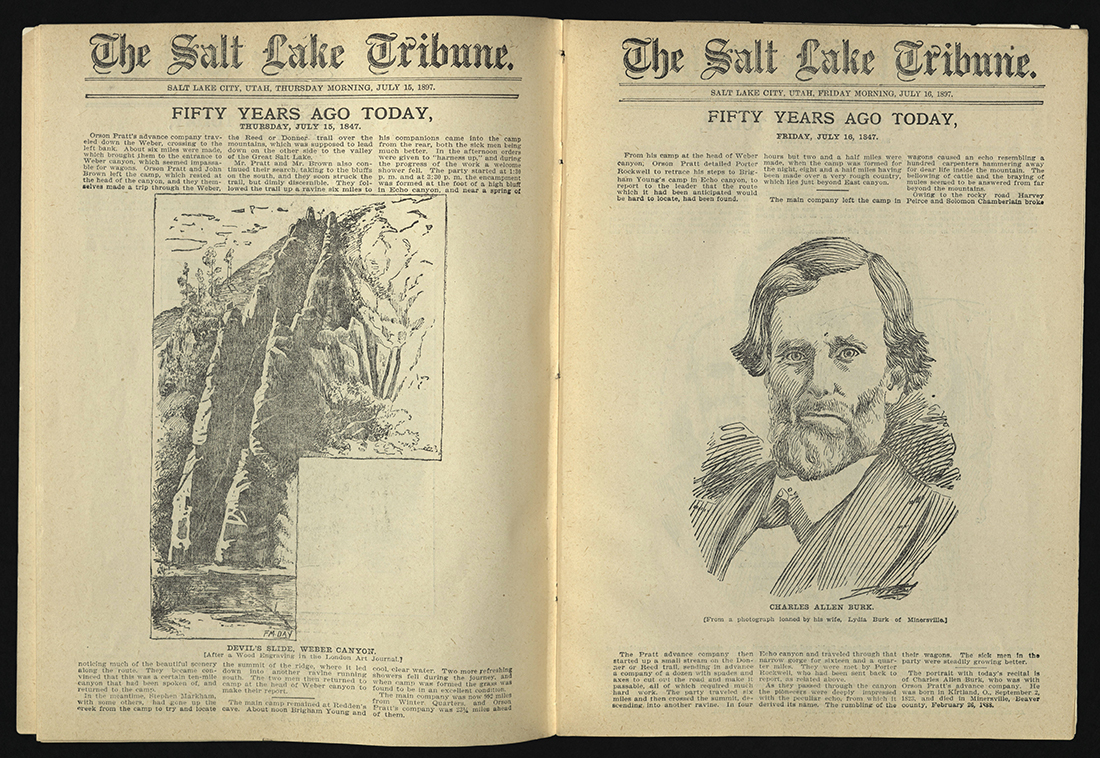 On July 12, 1847 Brigham Young directed Orson Pratt to move ahead with some forty men. The leading group followed the year-old Donner Trail through Echo Canyon, down the Weber to East Canyon, then over the Big Mountain, through Mountain Dell, over the Little Mountain, and on through Emigration Canyon to Great Salt Lake Valley. Orson Pratt and Erastus Snow were the first to arrive on July 21st. The next day, Pratt’s company followed, and on the morning of the 24th the main company under Brigham Young came into the valley and made their camp on the banks of City Creek. On leaving Emigration Canyon, Young stopped for a view of the valley below and uttered the immortal words, “This is the right place, drive on,” to Wilford Woodruff. On July 26th, Woodruff hiked to the top of what is now known as Ensign Peak and unfurled an American flag in the summer breeze. 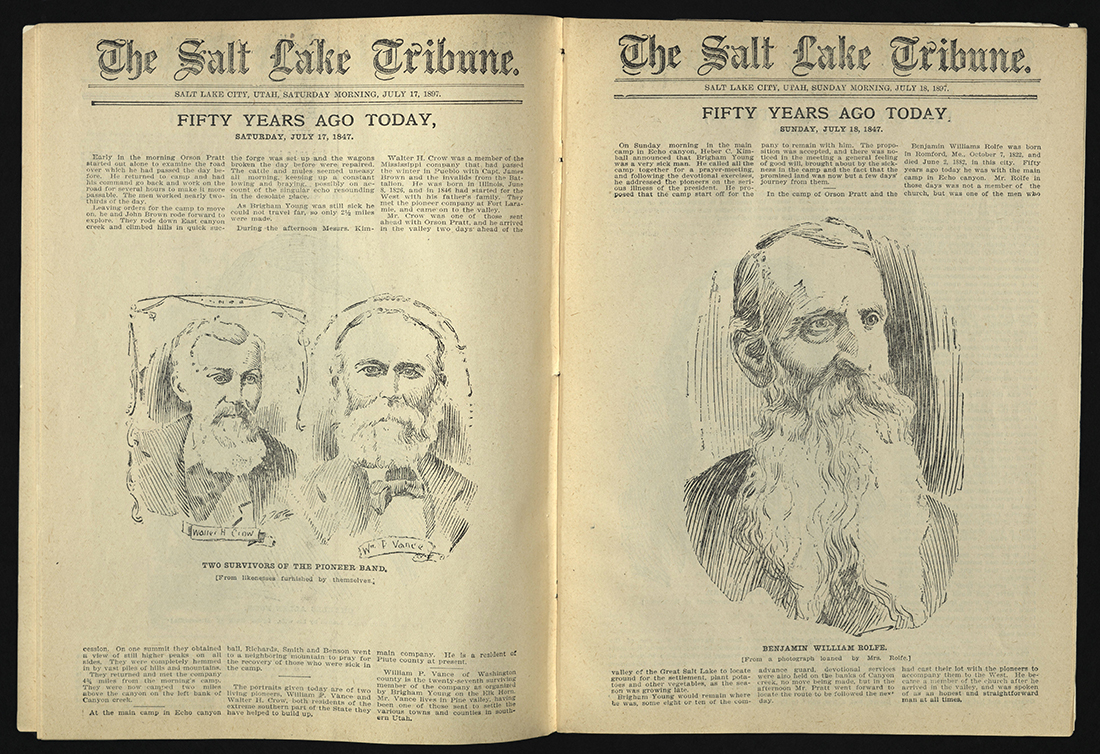 For four decades, the United States Congress refused applications for statehood from the Utah Territory. It wasn’t until January 4, 1896 — six years after the Church had officially denounced polygamy — that Utah would become the 45th state of the union. This celebration was overshadowed within just a few days, when the newly appointed Governor, Heber M. Wells, suggested that the Legislature assign a committee to plan an “Inter-Mountain Fair” to commemorate the fiftieth anniversary of the pioneers arrival. And thus, the Utah’s Pioneer Jubilee Commission was formed. For a year and a half, the commission worked to create an event worthy of their pioneer forefathers, to be remembered by all who came after. Organizers wanted the Pioneer Jubilee to be “the biggest celebration in the country since the 1893 World’s Fair” and the largest event yet to be seen west of the Mississippi. 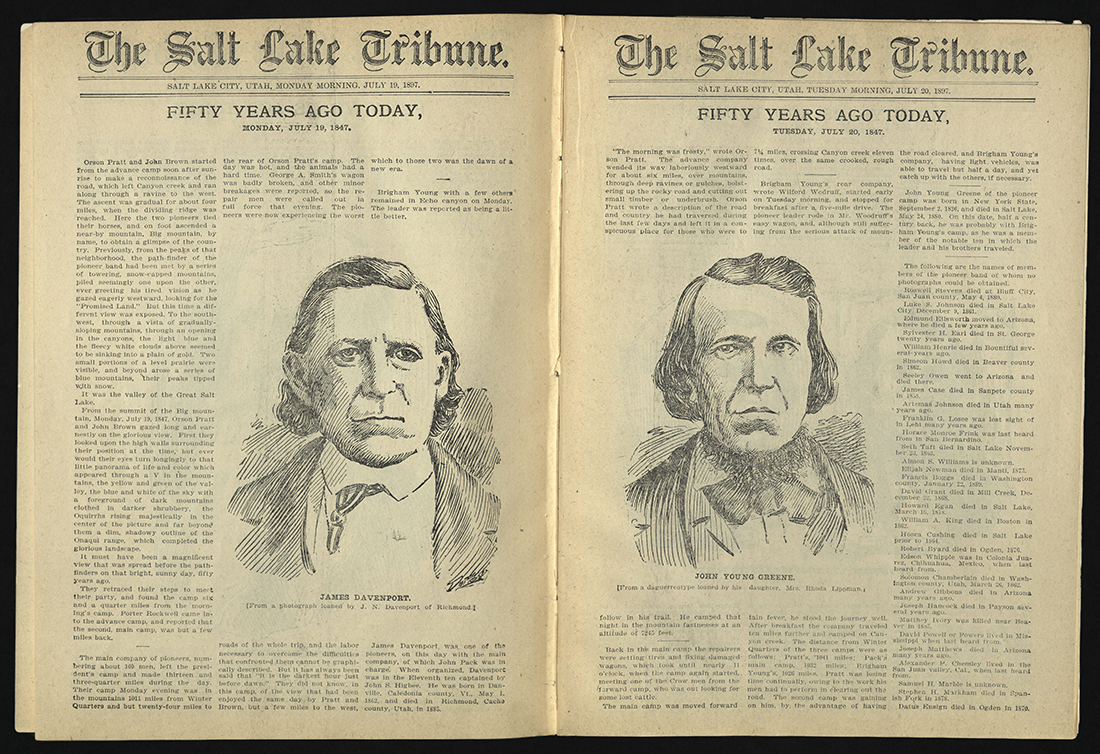 More than $60,000 was raised in private donations and public fundraisers in preparation for the Jubilee, in addition to financing from ten other states. The five-day event was advertised on both a local and national level, serving the dual purpose of showing the great advancement of the area during the last fifty years, as well as making a point that ‘1847’ was the more significant date of Utah’s founding. This event was to be one for the books. There were concerts, dances, games, bicycle races, singing and writing competitions, parades, and even a historic museum. Highlights included the revealing of the Pioneer Monument, followed by the presentation of a “Pioneer Badge” made for each of the veteran pioneers. 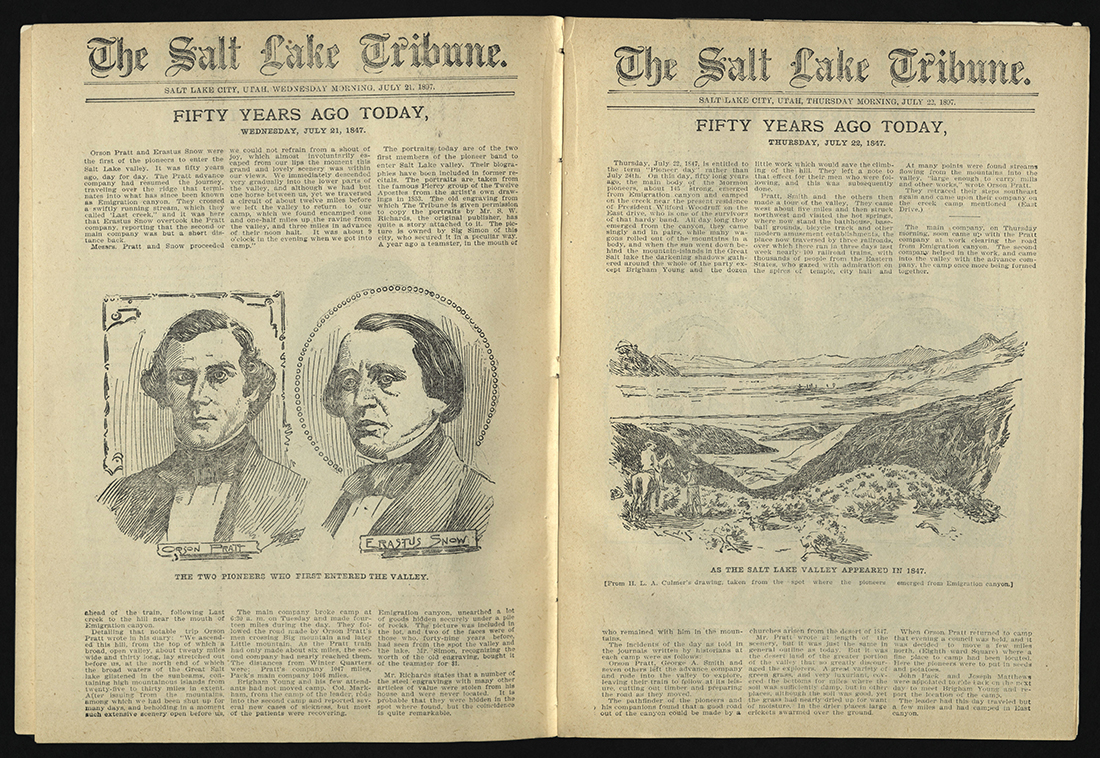 Of its priorities, Utah’s Pioneer Jubilee Commission had wanted to create a public record, which would be titled, The Book of Pioneers. Originally, the Commission considered only the first one hundred and forty-eight members of Brigham Young’s company, but after hundreds of letters came in requesting the honor, the Commission decided that all those who entered the valley in 1847 would be deemed “pioneers.” More than seven hundred pioneers survived the journey West. Of those, two hundred and fifty joined to celebrate the Jubilee. From Young’s original group of one hundred and forty-eight, twenty-eight were still alive and twenty-six were able to attend the celebration. In addition to free transportation to Salt Lake City, they received a gold badge inscribed with their name. 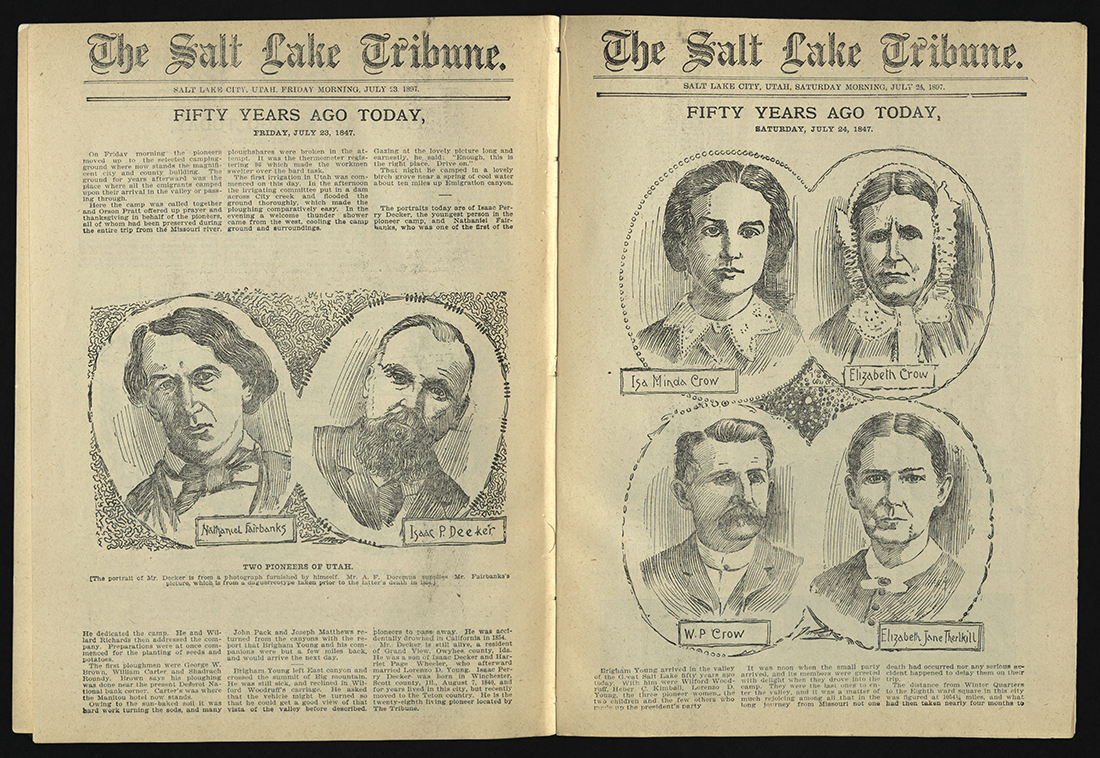 In this special issue of the Salt Lake Tribune, the names of Brigham Young’s entire company are listed in “The Story of Immigrants.” Among these names are three Black men: Green Flake, Hark Lay, and Oscar Crosby. By 1897, Flake — a slave that had made the journey and shared in the hardships — had become part of the Pioneer legend. Over the years he had given multiple speeches and recalled stories of his journey across the plains with Brigham Young, such as when Young negotiated with the indigenous tribes for safe passage, or when they took part in a buffalo hunt. According to the Salt Lake Tribune, Flake was “among the most interesting of the pioneers.” During the Jubilee, he participated in all of the events and even sat next to Church president, Wilford Woodruff, while the veteran group was being honored. 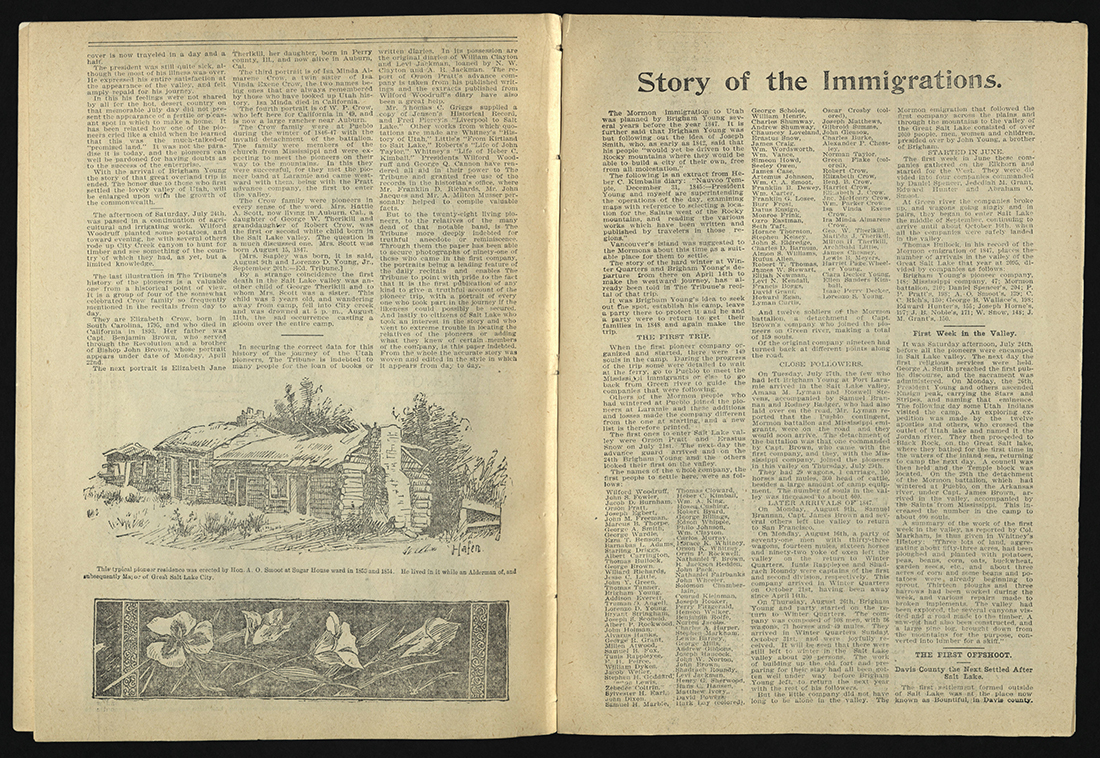 The Pioneer Jubilee was an event like no other, ending a chapter of political isolation, as Mormons embraced and were embraced by the outside world.  In just five decades, the “Land of Zion” had transformed from a wilderness haven for Latter-day Saints into a teeming crossroads sprouting a diversity of religions, as well as educational and business opportunities. Although members of the LDS Church would continue to hold a large majority, railroads, mining, and missionaries had brought new faces to Utah, including ethnic groups, such as Japanese, Chinese, and Greeks. Religious groups, including Catholics, Presbyterians and Jews, had also made Utah home. All were invited to join in the Jubilee, and nothing would rival the scale of the celebration until the 2002 Winter Olympics.

Fifty Years Ago Today is a collection of accounts printed in the Salt Lake Tribune, between April 5, 1897 and July 24, 1897, relating the events that happened on those same days, fifty years earlier during the Mormon trek West.