29 Sep BANNED! — All Quiet on the Western Front

Posted at 12:30h in Book of the Week, Rare Books by lyuba 0 Comments
5 Likes
Share 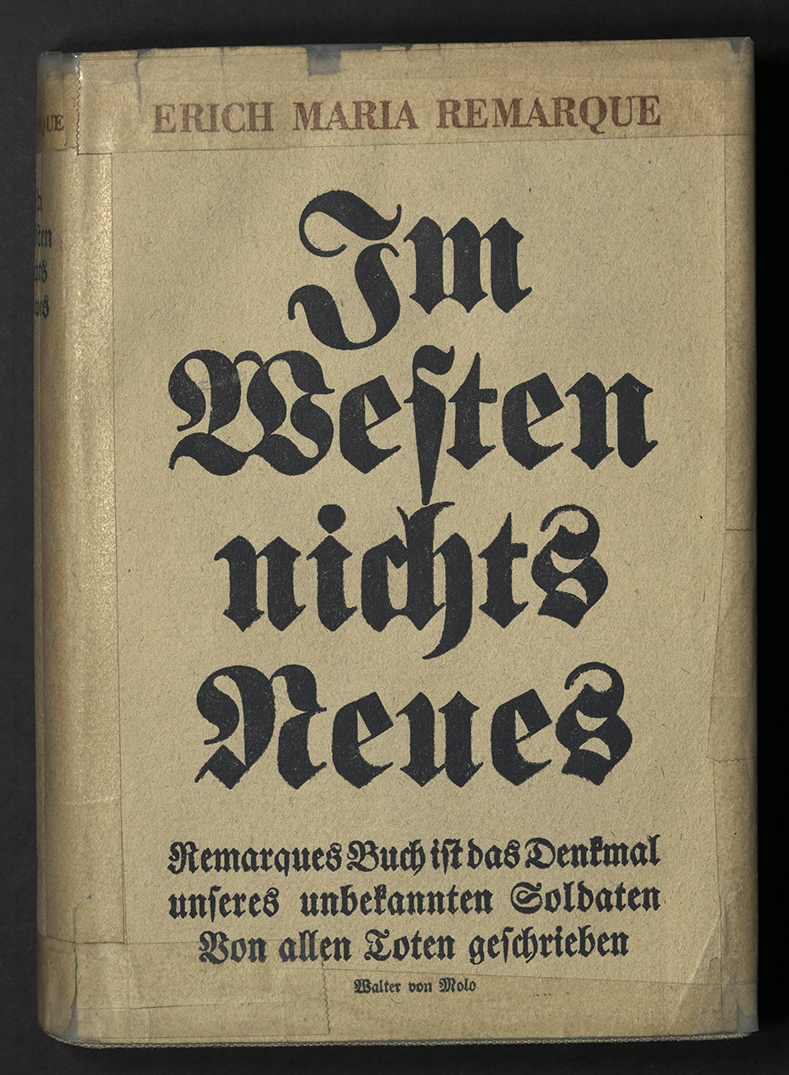 “But now, for the first time, I see you are a man like me. I thought of your hand-grenades, of your bayonet, of your rifle; now I see your wife and your face and our fellowship. Forgive me, comrade. We always see it too late. Why do they never tell us that you are poor devils like us, that your mothers are just as anxious as ours, and that we have the same fear of death, and the same dying and the same agony — Forgive me, comrade; how could you be my enemy?”

― Erich Maria Remarque, All Quiet on the Western Front 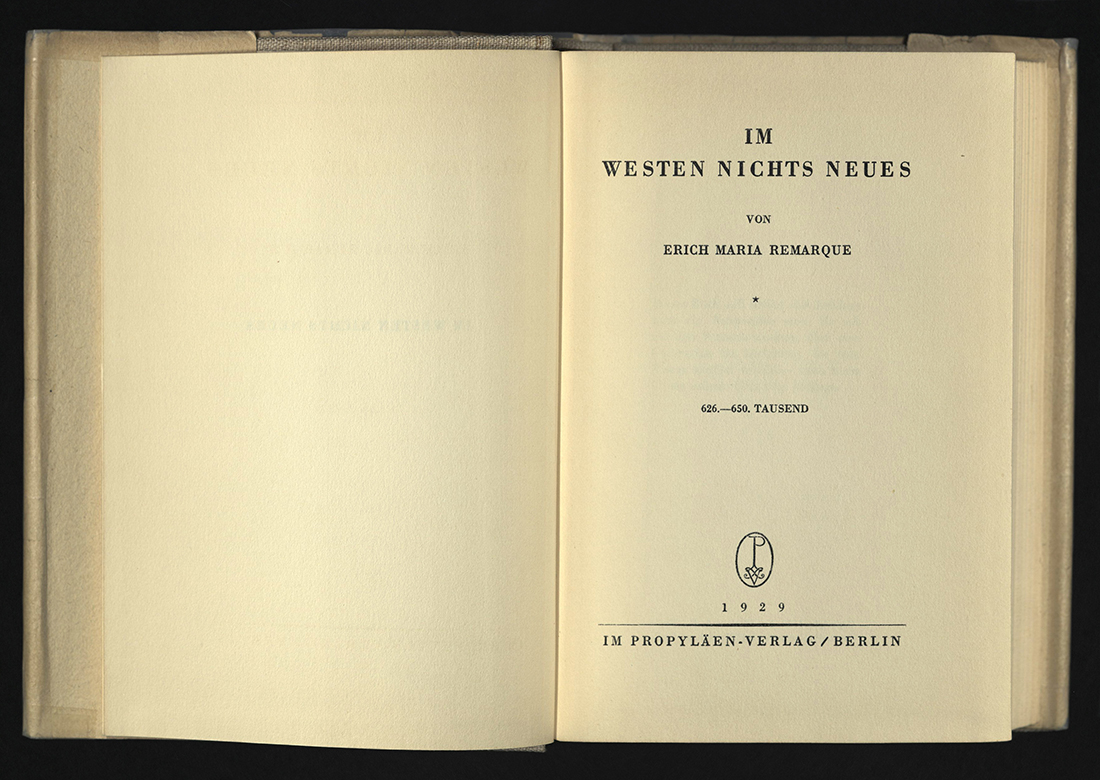 Erich Maria Remarque’s novel Im Westen nichts Neues was first published in serial form in the Vossische Zeitung magazine from November to December, 1928. In January of the following year, it was released as a book and saw immediate success. In the United States, the English translation titled, All Quiet on the Western Front, became a best-selling work of fiction. Within the first eighteen months in print, the novel had been copied in twenty-two different languages and sold 2.5 million copies. For something so popular, it may come as a surprise that Remarque’s novel was ever banned.

Although the book was published more than a decade after the armistice, the lingering weight of World War I was still heavy on the minds of readers. Remarque’s novel detailed the physical and mental stress of German soldiers during the war as well as the detachment from civilian life felt upon returning home. With its realistic depictions of trench warfare and the emphasis placed on the young soldiers’ experience, All Quiet on the Western Front provoked many of the war’s survivors. As such, Remarque became spokesman for a generation that had been “destroyed by war, even though it might have escaped its shells.” 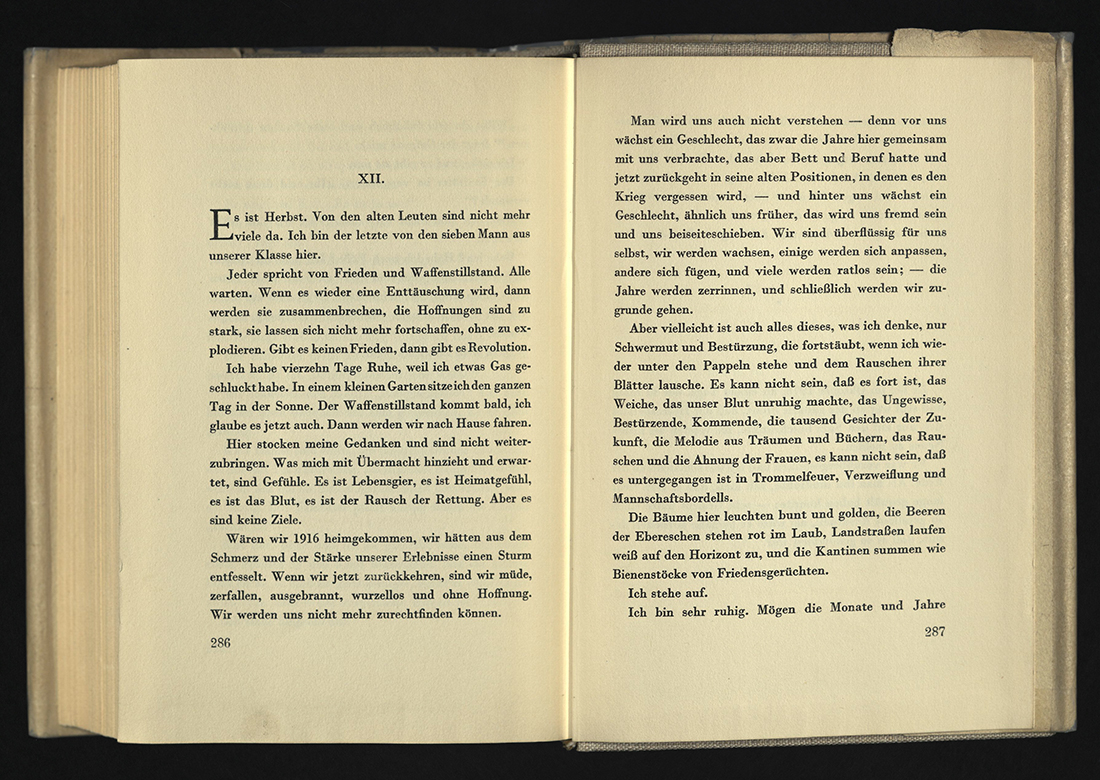 Surprisingly, Remarque’s harshest critics were his own countrymen, particularly those voices which came from the emerging Nationalist Socialist Party. When the Nazis rose to power in 1933 — just five years after the publication of the novel — Remarque’s writing was declared “unpatriotic” by propaganda minister Joseph Goebbels. Any and all copies of Remarque’s writing were removed from libraries and prohibited from being sold or published anywhere in the country. Then, on May 10, 1933 the first large-scale demonstration of book burnings occurred in front of the University of Berlin. In addition to 25,000 volumes written by Jewish authors, All Quiet on the Western Front was one of the first books to be publicly burned.

Remarque’s novel saw censorship outside of Germany as well. In the United States, the English translation was banned in Boston on grounds of obscenity; and in Chicago, U.S. customs had seized any volumes which had not been expurgated. Austrian soldiers were forbidden to read the novel, Czech military libraries removed copies from their shelves, while Italy banned the novel entirely due to its anti-war, pacifist agenda. Despite its success, or perhaps because of it, Remarque had his German citizenship revoked and was forced into exile. Just before the onset of World War II in Europe, Remarque and his wife left Switzerland for the United States. They became official U.S. citizens in 1947.