Posted at 12:30h in Book of the Week, Rare Books by lyuba 0 Comments
6 Likes
Share 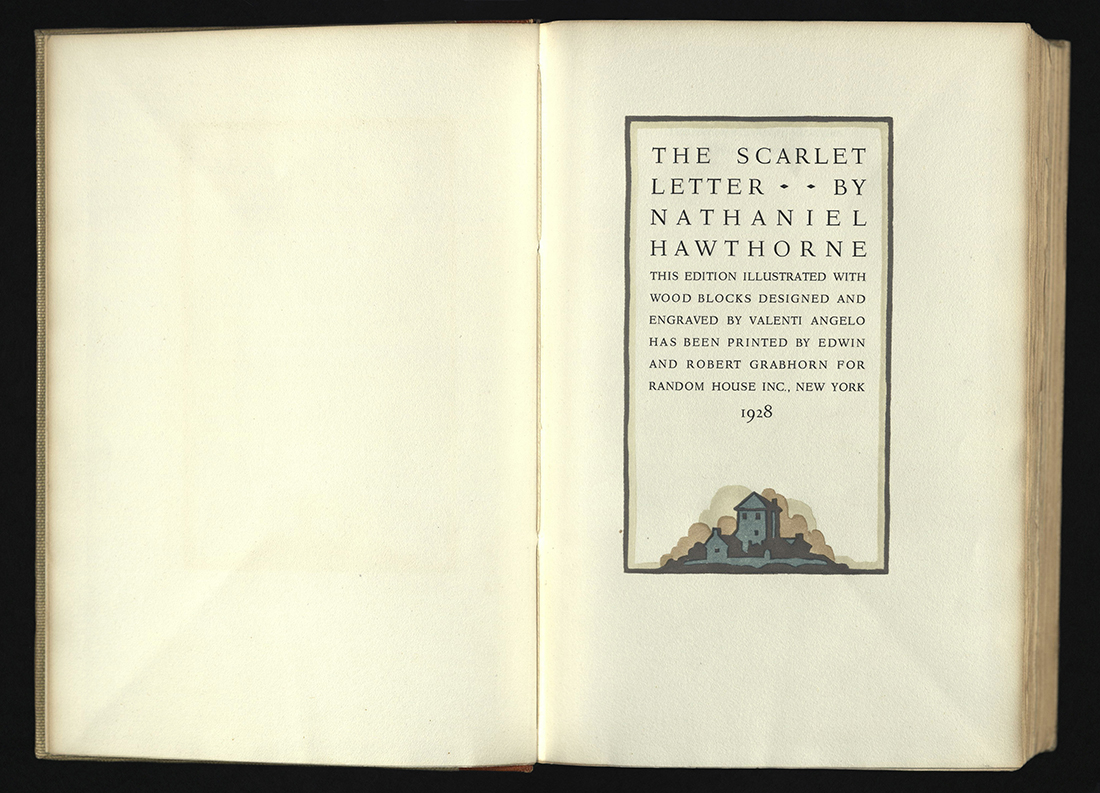 “She had wandered, without rule or guidance, into a moral wilderness… Her intellect and heart had their home, as it were, in desert places, where she roamed as freely as the wild Indian in his woods… The scarlet letter was her passport into regions where other women dared not tread. Shame, Despair, Solitude! These had been her teachers—stern and wild ones—and they had made her strong, but taught her much amiss.” 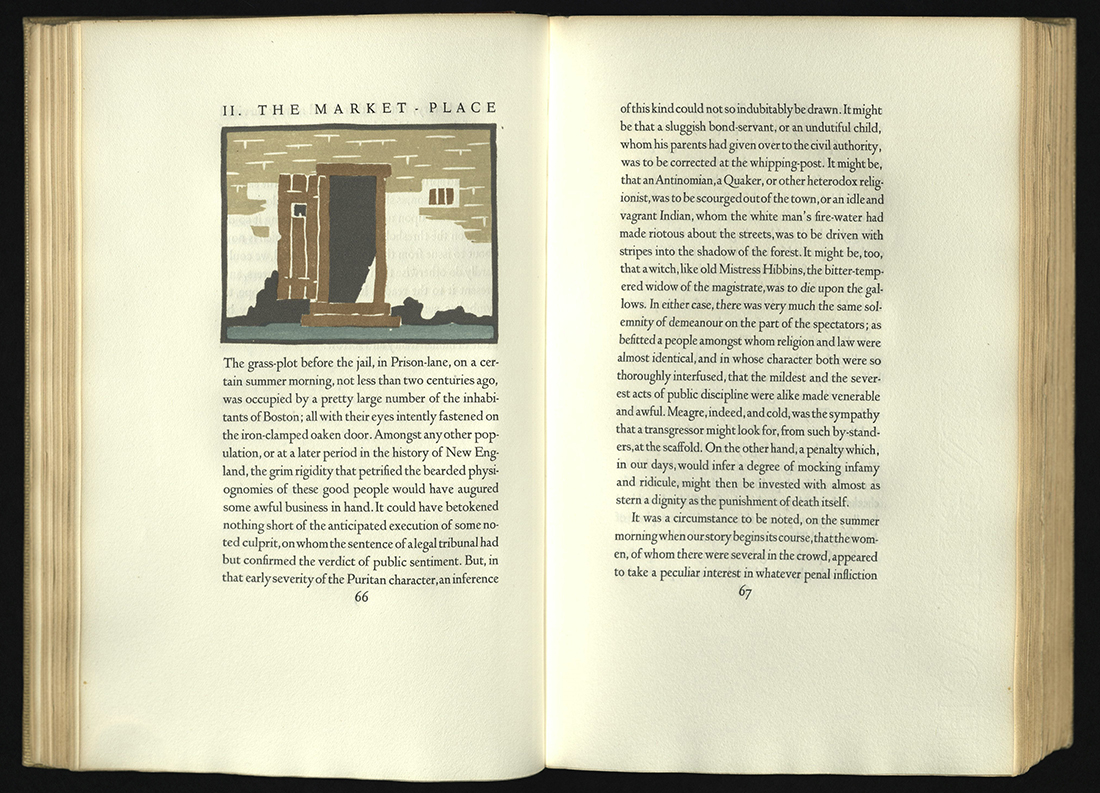 Nathaniel Hawthorne’s The Scarlet Letter was first published by Tickner, Reed & Fields in 1850. A work of historical fiction, the novel is set in a seventeenth-century Puritan Massachusetts Bay Colony and tells the story of Hester Prynne. Involved in an affair, Prynne becomes pregnant and later gives birth to a daughter, Pearl. The townspeople of Salem convict Prynne of adultery and force her to wear a scarlet letter ‘A’ as punishment. Throughout the novel there are themes of sin, guilt, and repentance, in addition to a number of religious and historical allusions. 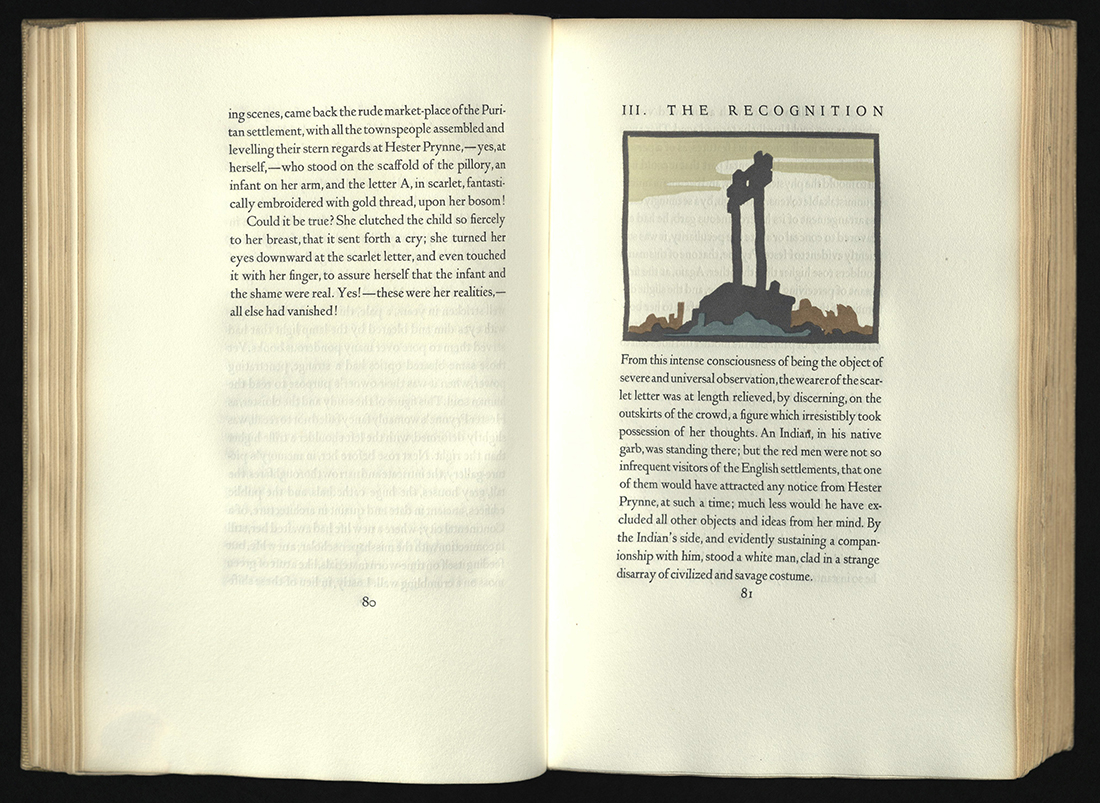 A detailed preface written by Hawthorne and titled, “The Custom House: Introductory to The Scarlet Letter,” makes the claim that the novel is actually based on fact. Hawthorne describes that while he was working as a Custom House agent, he found a manuscript along with a faded red letter ‘A’ in one of the upper rooms. The manuscript is said to have been written by Jonathan Pue, a predecessor of Hawthorne’s in the Custom House of Salem, Massachusetts — a government building that housed offices for the U.S. Customs Service, as well warehouses for the storage of bonded and impounded cargo. While making the premise for the novel in this introduction, Hawthorne also provided insight into his ancestry and his daily work as a civil servant. 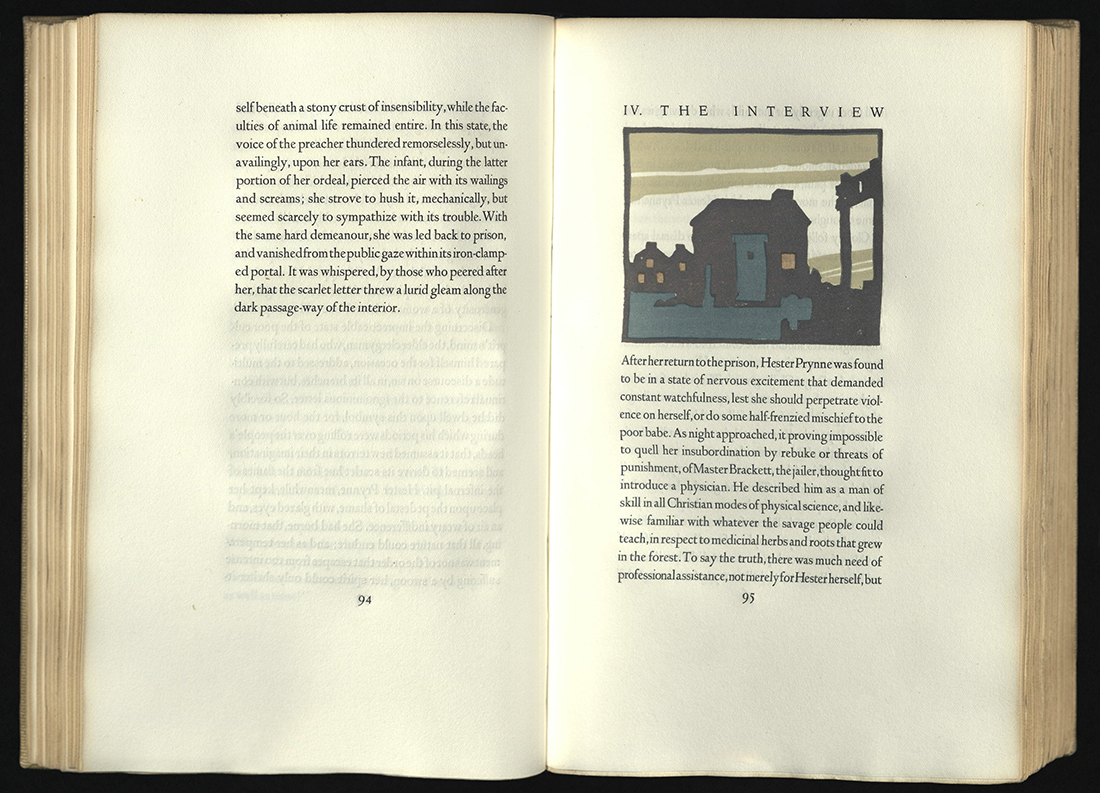 The novel was an immediate success, selling out its first edition of 2,500 copies in just a few days. Being one of the first mass-produced books in the United States, The Scarlet Letter drew praise from critics and literary figures, with author, D.H. Lawrence, calling it a “perfect work of the American imagination.” But not all who came upon the novel enjoyed it. Religious journals and clergymen across the country denounced what they deemed to be a “dirty story,” one that was only fit for the shelves of a “brothel library.” The people of Salem, Massachusetts had their own complaints. They took issue with the way the town was portrayed, condemning Hawthorne to the point that he was forced to move his family out of the city and into a farmhouse in the rural area of the Berkshires. 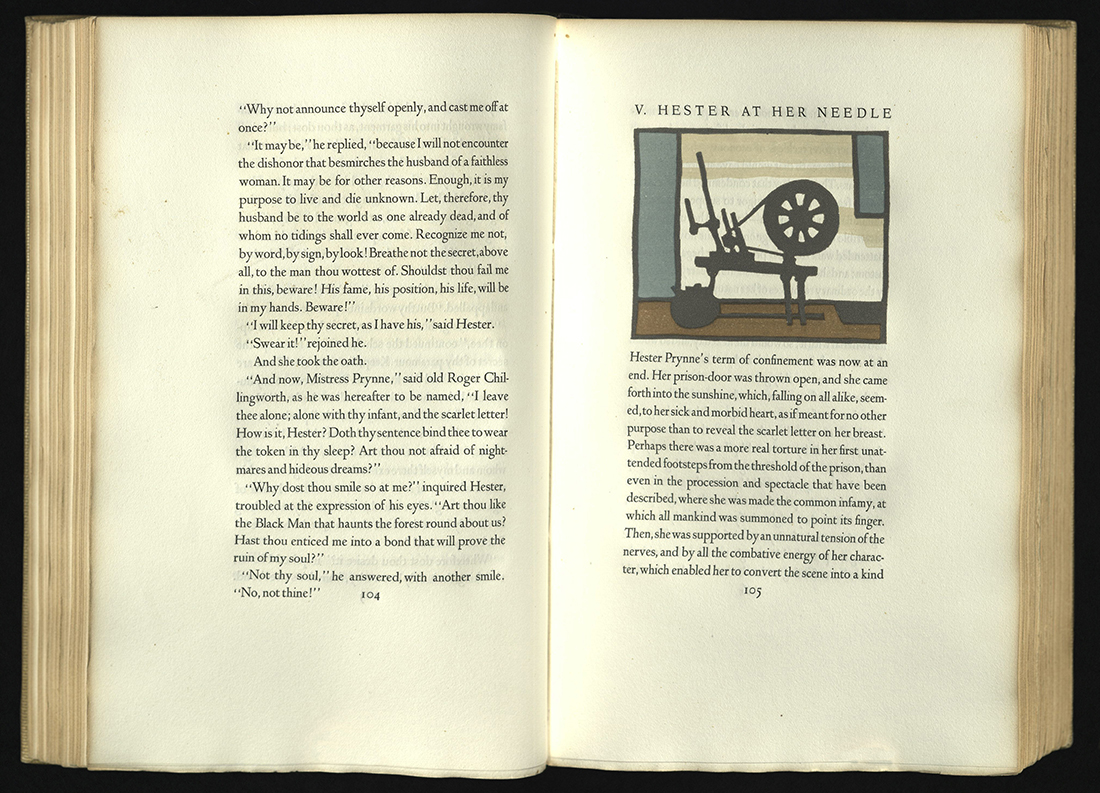 In 1852, Reverend Arthur Cleveland Coxe, the second Episcopal bishop of Western New York, called for the banning of The Scarlet Letter and launched an attack on Hawthorne and the novel, proclaiming that he was against “any toleration to a popular and gifted writer when he perpetuates bad morals.” More than anything, people were outraged that the novel — and thus, Hawthorne — took the side of Hester Prynne while condemning her husband’s revenge. Meanwhile in Imperial Russia, the novel was entirely banned by Czar Nicholas I during his epoch of “censorship terror.” 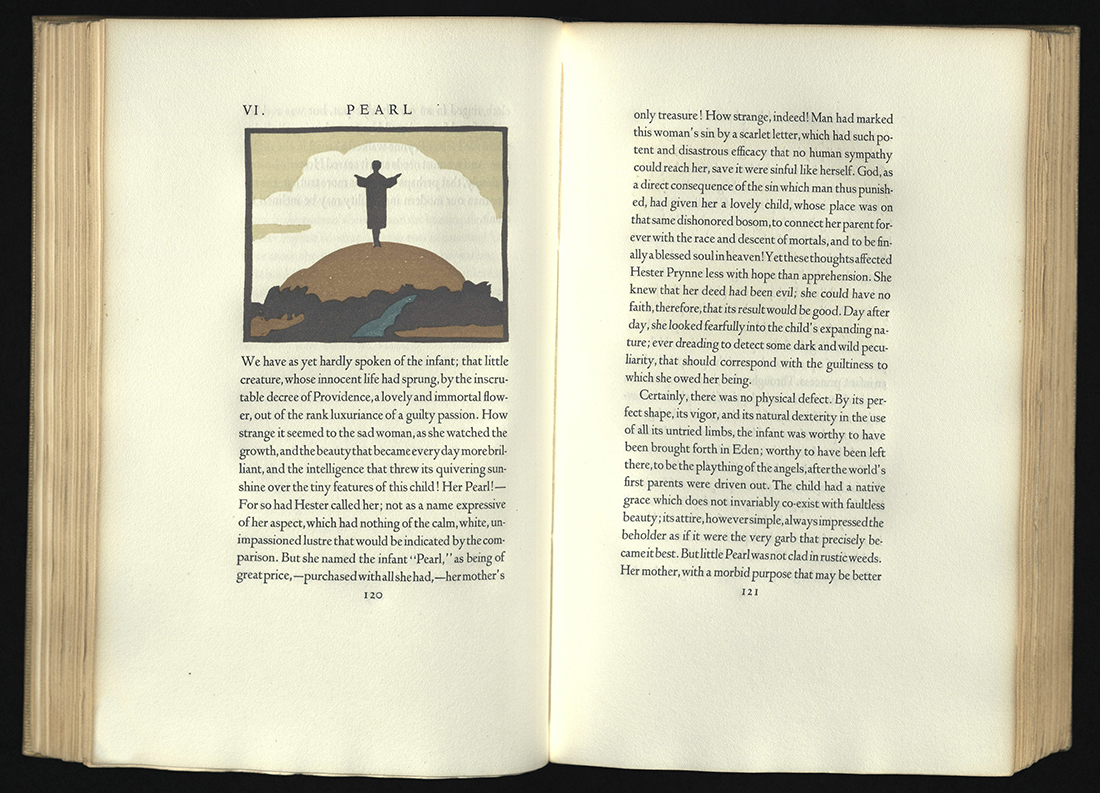 For nearly a century The Scarlet Letter was more or less overlooked. However in 1961, controversy surrounding the novel resurfaced. Parents of students in a Michigan district objected to the assignment of the novel in high school, arguing that it was “pornographic and obscene.” Though the parents demanded that the book was removed from the curriculum, the request was denied. Other requests have continued well into the twentieth century, but the novel is still commonly read in high schools all across the United States. 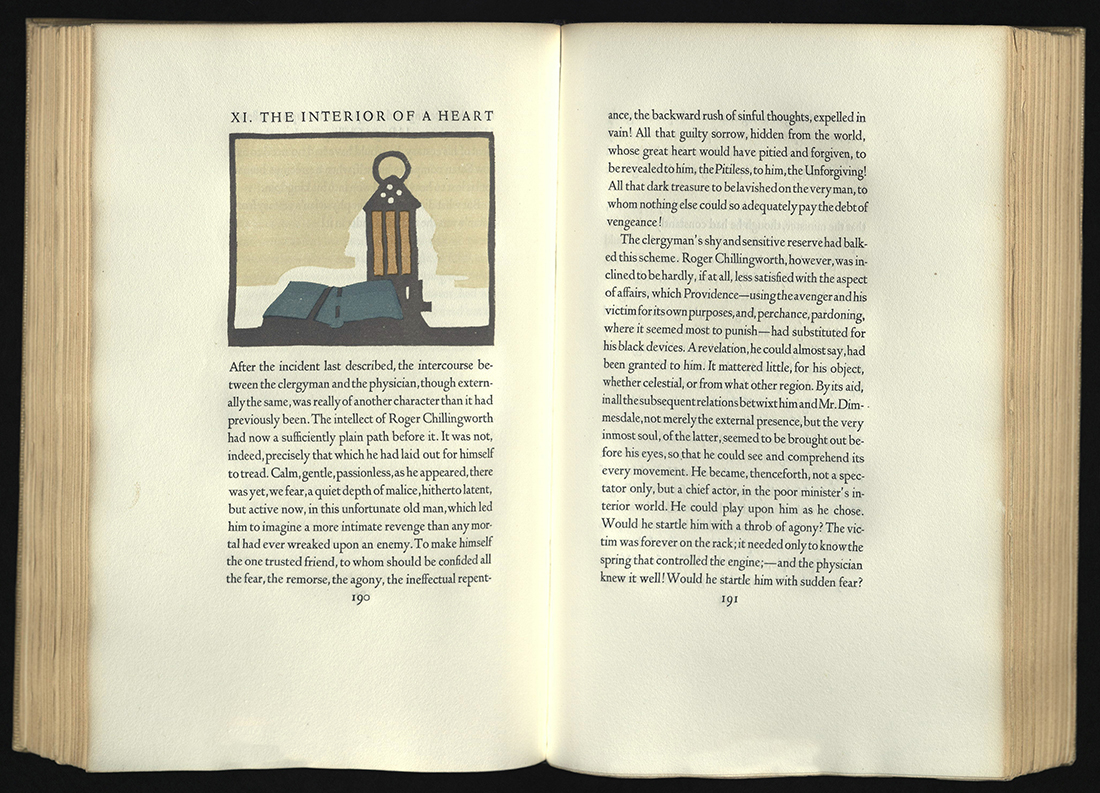 This 1928 edition of The Scarlet Letter was printed by Edwin and Robert Grabhorn for Random House Inc., New York. Each chapter is illustrated with wood blocks designed and engraved by Valenti Angelo; type is hand-set, 14 point Lutetia from the foundry of Johan Enschede of Haarlem, Holland; paper is unbleached Arnold wove antique. It was published in a limited edition of 980 copies.