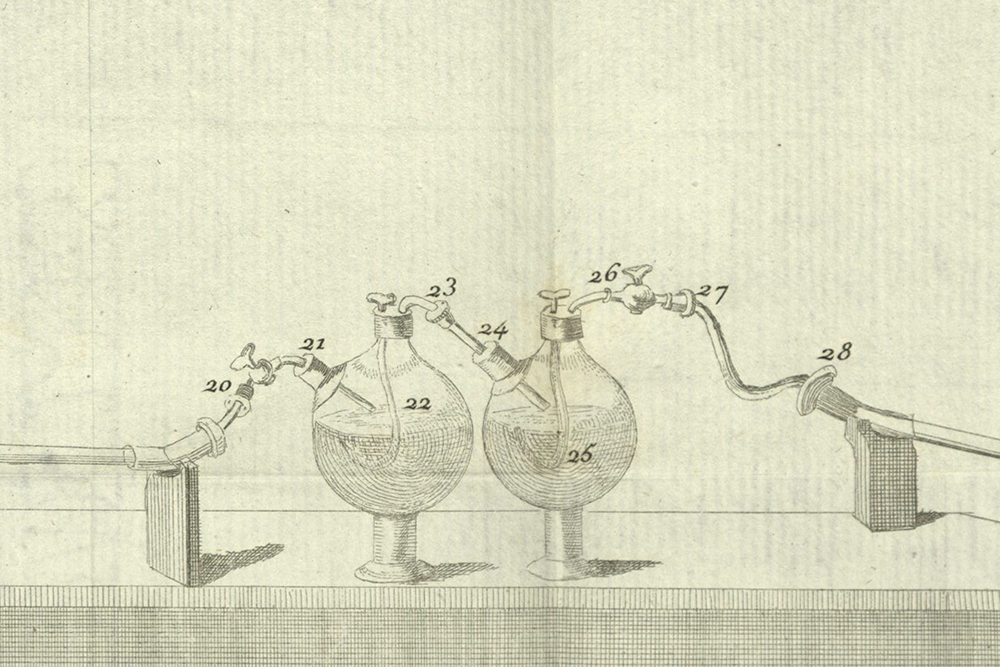 04 May Best Graduation Present Ever “It is not the history of the science, or of the human mind, that we are to attempt in an elementary treatise. Our only aim should be ease and perspicuity, and with the utmost care to keep every thing out of view which may draw aside the attention of the student. It is a road which we should be continually rendering more smooth, and from which we must endeavour to remove every obstacle which can occasion delay.”
…
“Like three impressions of the same seal, the word ought to produce the idea, and the idea to be a picture of the fact. And, as ideas are preserved and communicated by means of words, it necessarily follows, that we cannot improve the language of any science, without at the same time improving the science itself; neither can we, on the other hand, improve a science, without improving the language or nomenclature which it belongs to.”

When he received his Ph.D in chemistry from the University of Texas, Henry Sheldon White’s mother gave him a copy of the fourth edition of Antoine Laurent Lavoisier’s Elements of Chemistry. The pages of this book were worn and brown with years of use, but it was intact, despite a deteriorated binding. Not a year later, while Dr. White held a postdoctoral appointment at MIT, he spent $105 to have the binding restored. The restoration was done by professional bookbinder and conservator Nancy Carlson Schrock.

The gift and its restoration were so important to Dr. White that he kept the book and the conservator’s invoice for the next thirty-four years. And then, he gave both to the Rare Books Department. When Dr. White had occasion to hold our first edition of Lavoisier’s Traite, he fondly remembered the best graduation present ever. Dr. White remembered reading Lavoisier’s work like someone might remember holding the hand of one’s first love – a lasting impression, even as life moves on.

He remembered the detailed copper engraved illustrations at the back of the book, made by Lavoisier’s beloved wife, Marie-Anne Paulze Lavoisier. He lamented the loss of Lavoisier, who nearly survived, but did not, the French Revolution.

All of which is and ever shall remain a mystery to me. But I do understand how the newly confirmed Dr. White must have felt when he held this book in his hands, a preserved package of ideas communicated by means of words, at the beginning of a new journey.

Congratulations to The University of Utah’s 2017 graduating class. May you render the road smooth with ease and perspicuity.

The Air We Breathe — He named this substance “oxygen” Antoine Laurent Lavoisier laid the foundation for modern chemistry by establishing the concept of elements as substances that cannot be further decomposed. He carried out the earliest biochemical experiments and through these explained many of the cyclical processes in animal and vegetable life. One of the most important consequences of Lavoisier’s work was the establishment of the concept of the conservation of matter.

Traite elementaire is presented in the form of a manual. Lavoisier offered a new theory of chemistry treated in a systematic approach unlike anything that had preceded it. He used accurate measurements for chemical research, such as the balance for weight distribution at every chemical change. He reformed chemical nomenclature, assigning every substance a name based upon the elements of which it was composed. He proved that the increase in the weight of metals was due to something taken from the air, and that this effect was constant in all such processes. He named this substance “oxygen.” He concluded that water was a compound of oxygen and hydrogen. He understood that respiration and combustion were similar processes, and, since oxygen was that part of the air that combined with metals in the process of combustion, he named the resulting substances oxides. Compound bodies were found to present the combined weight of the simple bodies of which they are composed, while, when these simple bodies are withdrawn, they have the same weight as was put in them; i.e. matter remains constant throughout all chemical changes.

The book contains thirteen copperplate illustrations, drawn and engraved by Lavoisier’s wife, a skilled painter who had studied under the artist Louis David.

This Kerr edition of Lavoisier’s work is important for its considerable additions and for an interesting postscript in which Kerr bitterly condemns the execution of Lavoisier. “The Philosophical World has now infinitely to deplore the tragical and untimely death of the great LAVOISIER…If the sanguinary tyranny of the monster Robespierre had committed only that outrage against eternal Justice, a succeeding age of the most perfect government would scarcely have sufficed, To France and to the world, to repair the prodigious injury that loss has produced to chemistry, and to all the sciences and economical arts with which is it connected.” Kerr also alludes in his prefatory remarks to the larger work that Lavoisier was going to write. “Had Lavoisier lived, as expressed in a letter received from him by the Translator, a short while before his massacre, it was his intention to have republished these Elements in an entirely new form, composing a Complete system of Philosophical Chemistry…”