05 Jul Book of the Week — Cascadia

Posted at 12:00h in Book of the Week, Rare Books by lyuba 0 Comments
4 Likes
Share

“This book is a remembrance of what was lost, an appreciation of what is left, and a celebration of what could be. Forests are not eternal. For all their solemn stillness, they constantly change, evolve, die, and regrow. But they are persistent, and they always strive to return to an intricacy that is both evocative and instructive…” 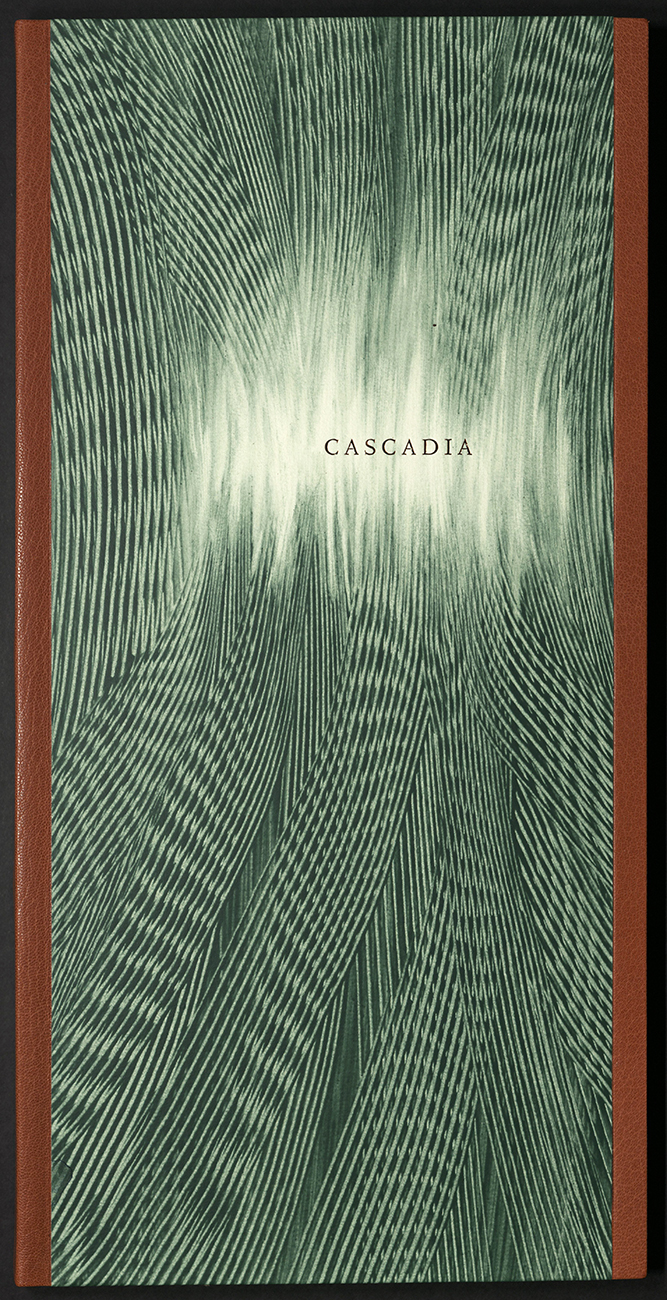 Cascadia is an exploration and celebration of the wild forests of the Pacific Northwest. In this homage to natural grace and wonder, a master wood engraver, Richard Wagener, Pulitzer prize-winning writer, William Dietrich, and acclaimed haiku poet, Christopher Herold, weave a rich and insightful tapestry of old growth forests and uncertain futures. Cascadia, from which the book takes its title, is a unique coastal bioregion, as well as a bioregional movement, located within the rugged northwest corner of the North American continent. 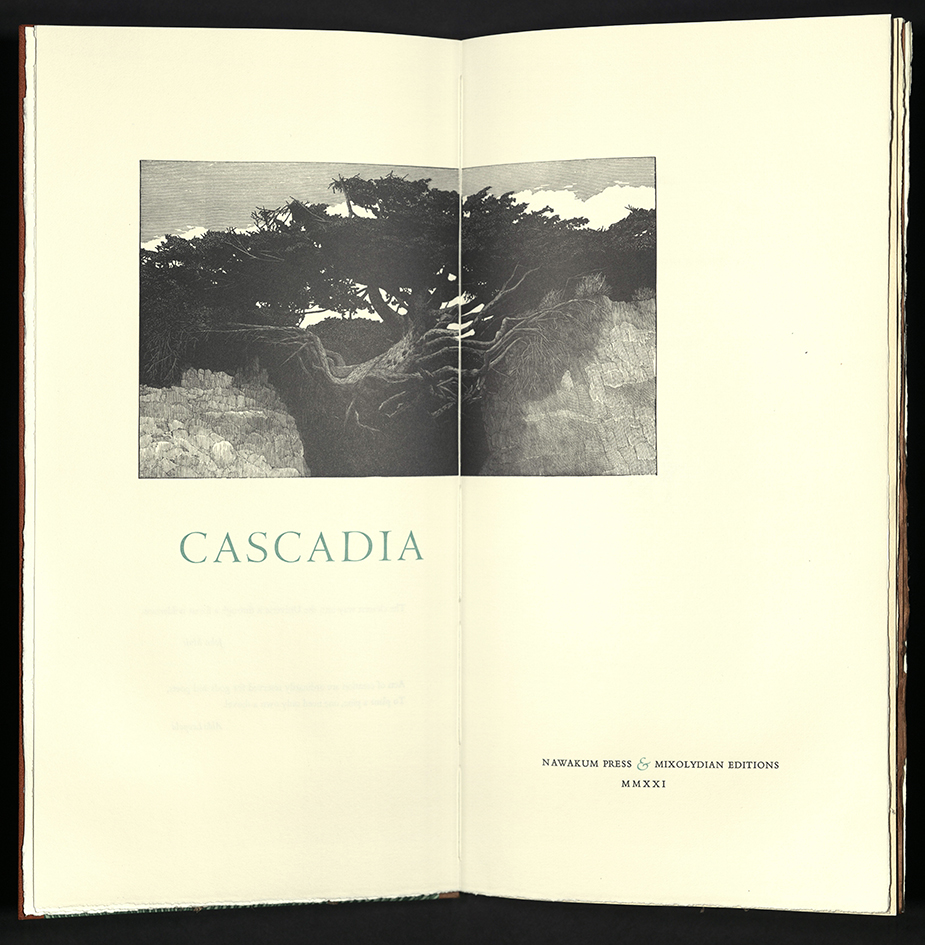 Cascadia, and the concept of bioregionalism surrounding it, grew out of the environmental movements of the 1970s and formed through a collaboration between natural scientists, social and environmental activists, artists, writers, community leaders, and back-to-the-landers. Among these groups, a bioregion is defined by the overall pattern of natural characteristics found in a specific place, such as geographic terrain, climate, seasons, landforms, watersheds, soils, and native plants and animals. The bioregion of Cascadia thus extends north and south for more than 2,500 miles — from the Copper River in Southern Alaska, to Cape Mendocino, 200 miles north of San Francisco — and as far east as the Yellowstone Caldera and continental divide. It traverses through eight states, including all of Washington, all but the southeastern corner of Idaho, as well as portions of Oregon, California, Nevada, Wyoming, Montana, and Alaska. Cascadia also includes part of the Yukon and British Columbia in Canada. Throughout the vast area, the Cascadia bioregion encompasses seventy-five distinct ecoregions or ecosystems. 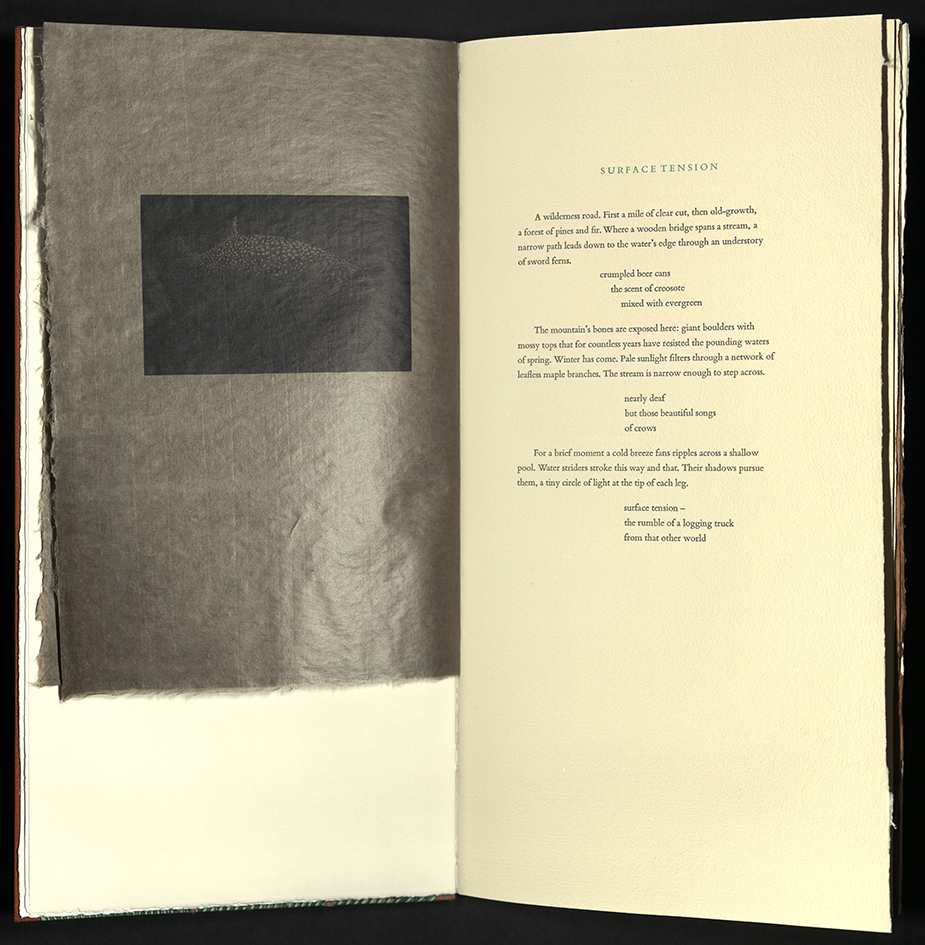 During the early nineteenth century, the term “Cascades” was first used to refer to a section of rapids along the Columbia River. The Astor expedition of the Pacific Fur Company, the Lewis and Clark expedition, and the many settlers and traders that followed would meet their last obstacle at these rapids while heading west on what would later be called the Oregon Trail. Before long, the white-caped mountains that filled the landscape were called the “mountains by the cascades” and later, simply, the Cascades. The earliest use of the name “Cascade Range” can be found in the writings of famed botanist, David Douglas in 1825. Throughout the 1900s, the term was then applied more generally to a larger region. 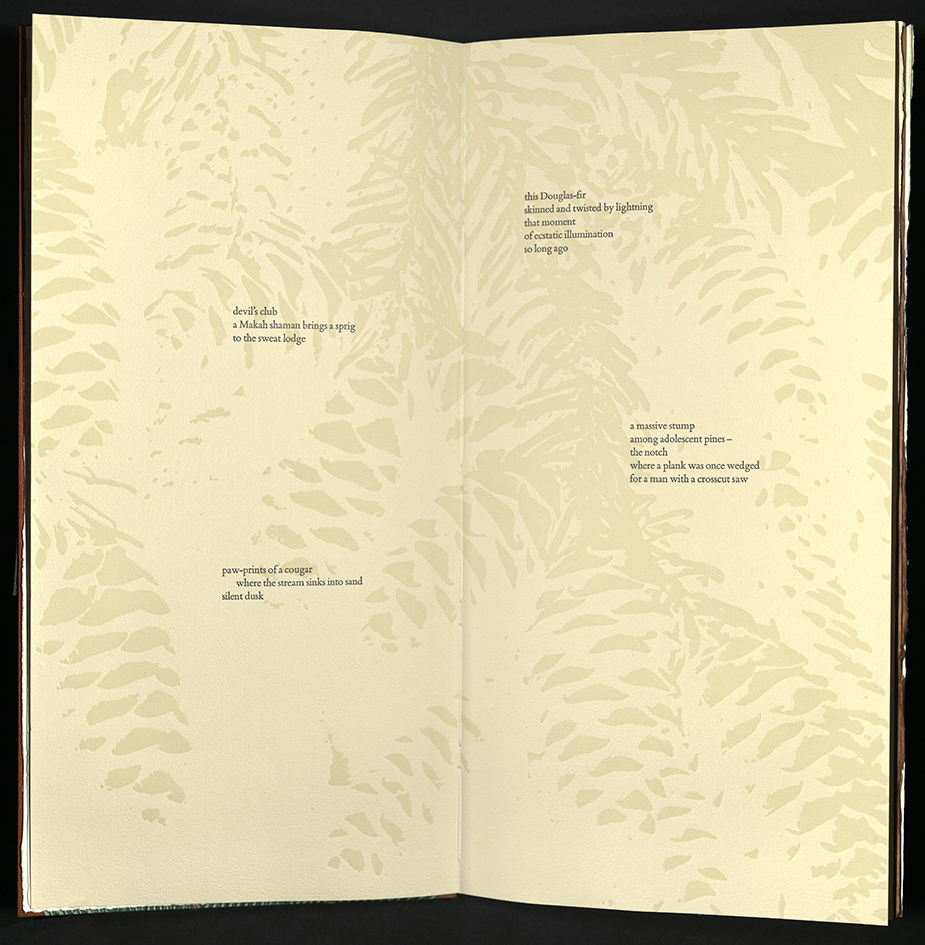 Although the town of Cascadia, Oregon was settled as early as 1890, it was not until 1972 that the term would be used to refer to the geologic region of the Pacific Northwest. Bates McKee’s book, Cascadia: the Geologic Evolution of the Pacific Northwest would later inspire Seattle University sociology professor, David McCloskey, to adopt the name for the bioregion as it is known today. For McCloskey, Cascadia is “a land of falling waters” that blends the natural environment with sociocultural unity. Despite its roots in geology and natural sciences, Cascadia is also a cultural idea that is drawn from anthropological studies, historical accounts, social developments, customs, traditions, and art. It is both a geographic terrain and a terrain of consciousness. Cascadia as a bioregion thus analyzes the connected ecological, environmental, economic, and cultural ties that are prevalent in the Pacific Northwest, and distinct from their eastern counterparts. The ultimate goals behind the concept of bioregionalism are to restore and maintain local natural systems; practice sustainable ways to satisfy basic human needs such as food, water, shelter, and materials; and support the work of reinhabitation. 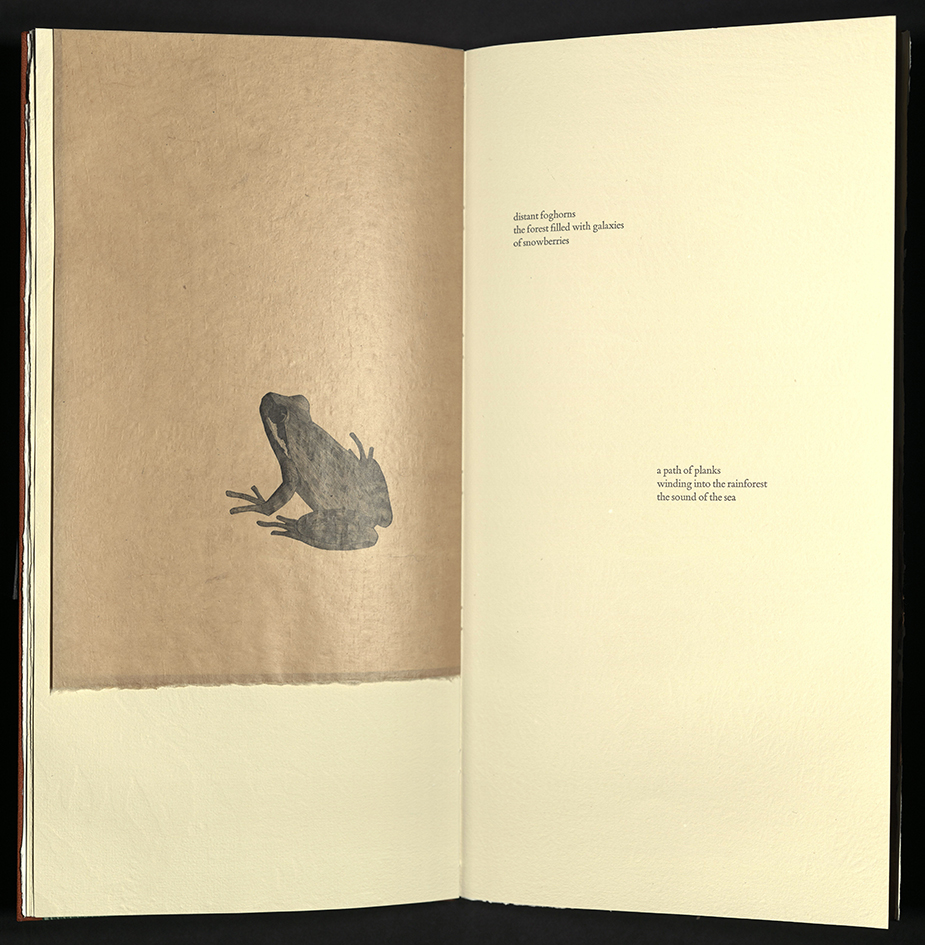 In coming up with the concept of Cascadia, the book, Richard Wagener set in mind to accomplish a couple of things. First, he wanted to try and present the awe that is felt when walking among old growth trees of the forest. He also wanted to express the experience of being in the wilderness, where “no matter where you look, there’s always something different to see. There’s always this yearning to see what’s around the next bend, what’s over the next hill.” To provide that experience, Wagener and David Pascoe of Nawakum Press focused on using a variety of papers. One paper used — Indiana day-lily paper — is very aromatic, while others invoke the textures of sand and dirt. For the edition, Wagener created twenty-six remarkable boxwood engravings, ranging from mushrooms to pygmy owls, from marbeled murrelet to black bear. All were printed by hand on his Vandercook proof press. Over half were printed on colored, handmade Japanese Bicchu and Yamagampi papers.

Wagener is a California printmaker and book artist specializing in fine wood engraving. At Mixolydian Editions he publishes his own prints and books. He was a co-recipient of the 2016 Carl Hertzog Award for Excellence in Book Design, and was also awarded the Book Club of California Oscar Lewis Award the same year for his contributions to the book arts. In the summer of 2019 he traveled to the Olympic National Forest, on the west coast of Washington State, for research on this project. 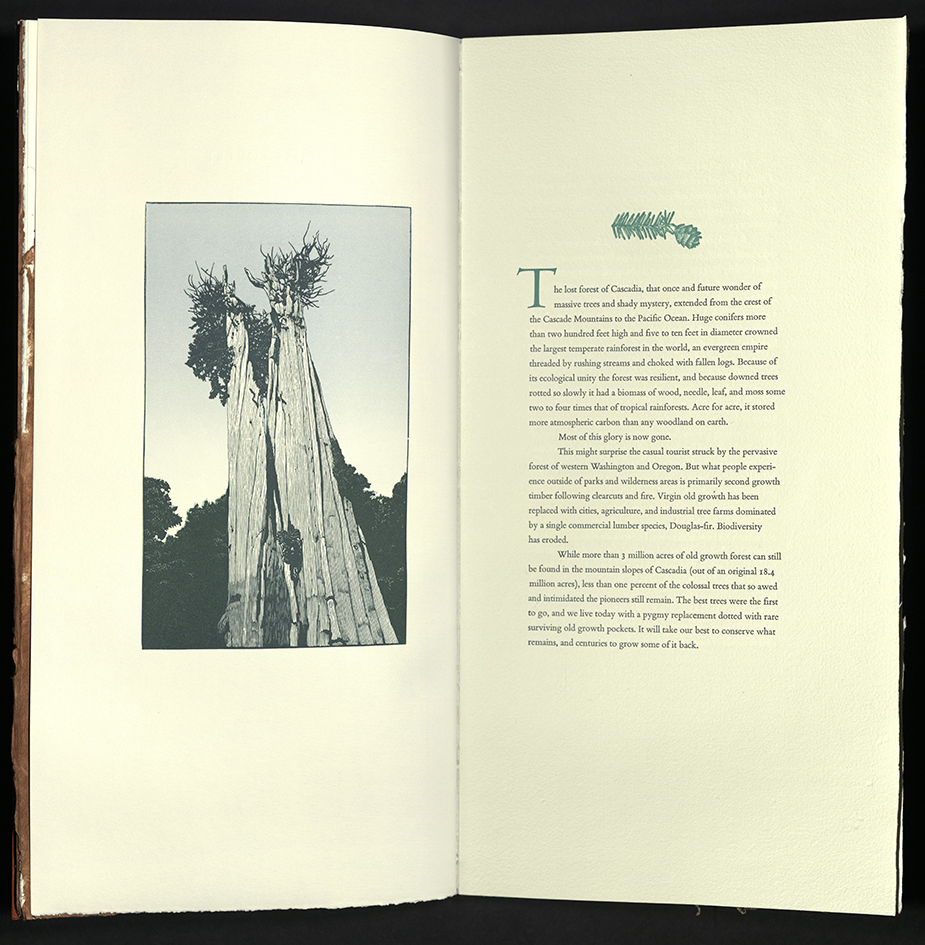 Other contributors to Cascadia include writers William Dietrich and Christopher Herold. Dietrich is a Washington State novelist and non-fiction author of twenty-two books. As a journalist, he shared the 1990 Pulitzer prize for national reporting for his coverage of the Exxon Valdez oil spill in Alaska. He was a Nieman Fellow at Harvard University and later won reporting and study fellowships from the National Science Foundation, Woods Hole, and Scripps Institute. His first book, The Final Forest (1992), won the Pacific Northwest Booksellers Award and Washington State Governor Writer’s Award. He has since taught environmental journalism, traveled to the Arctic and the South Pole, and covered the eruption of Mount St. Helens. For Cascadia, Dietrich wrote “The Lost Forest” — an essay and meditation delving into forest realms past, present and future. In crisp and lyric prose he portrays for the reader the essence of what is so special about these sacred places, and what is truly at stake in preserving them.

Christopher Herold provided thirty haiku poems and three haibun for Cascadia. Herold is an award winning haiku poet from Washington State, formerly of the San Francisco Bay Area. He is past president of the Haiku Poets of Northern California, co-editor of their journal Woodnotes, and has often served in the position of judge, most notably for the Haiku Society of America. He also writes tanka, haibun, and renku. Herold is a Buddhist lay monk and musician, formerly having played and recorded with John Lee Hooker, T-Bone Walker, Jerry Garcia, and Mike Bloomfield. His numerous books have won many awards including A Path in the Garden (2000) for which he won the Haiku Society of America Book Award. 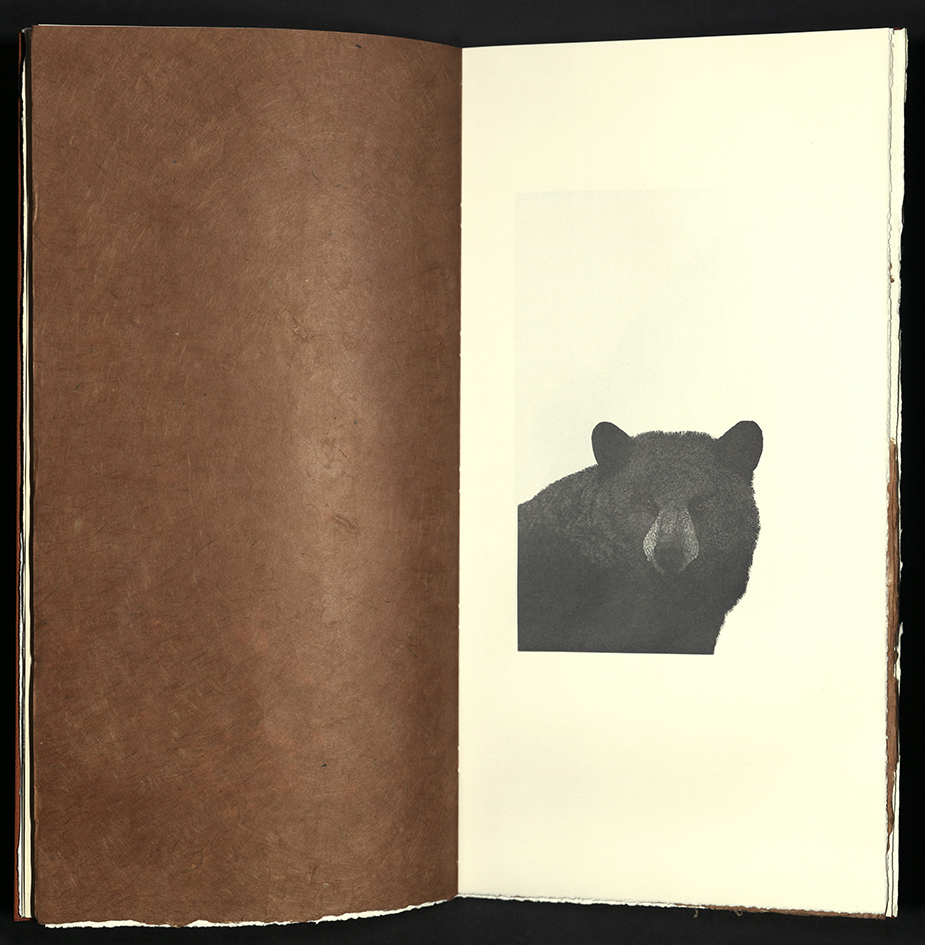 This book is a remembrance of what was lost, an appreciation of what is left, and a celebration of what could be. Cascadia was designed and co-published by David Pascoe of Nawakum Press and Richard Wagener of Mixolydian Editions. The printing was done by Richard Wagener and Patrick Reagh, who typeset and cast the type. The typefaces are Monotype Bembo and Centaur Titling. Calligraphic kanji characters by Chiyo Sanada. The papers are handmade St. Armand from Montreal, Zerkall from Germany, along with Japanese Bichhu and Yamagampi. Endpapers are from Hook Paper in Indiana. Paste papers for the covers were created by artist Meredith Broberg in Massachusetts. The bindings and enclosures are by hand bookbinder John DeMerritt in California. University of Utah rare books copy is the Deluxe Edition copy “U.”

See Cascadia and other books printed throughout the pandemic on display in the Special Collections Exhibition Gallery, on level four of the Marriott Library.