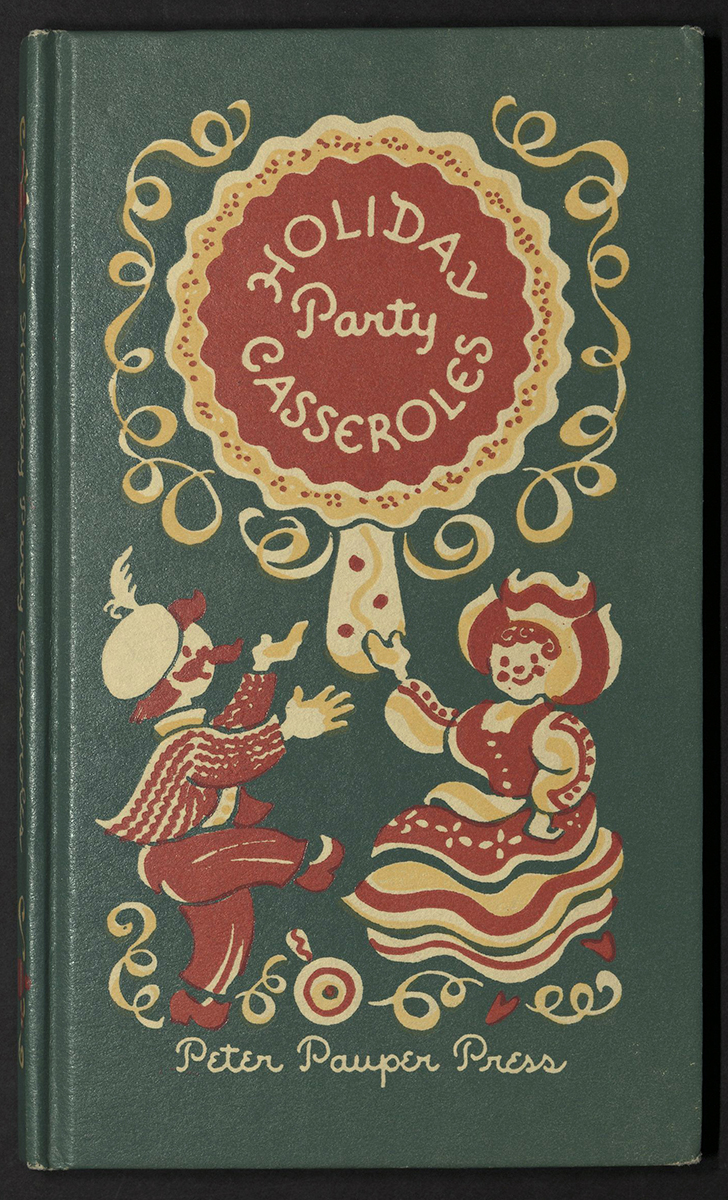 “Casserole cooking is easy as pie. A party is born in the wink of an eye.” 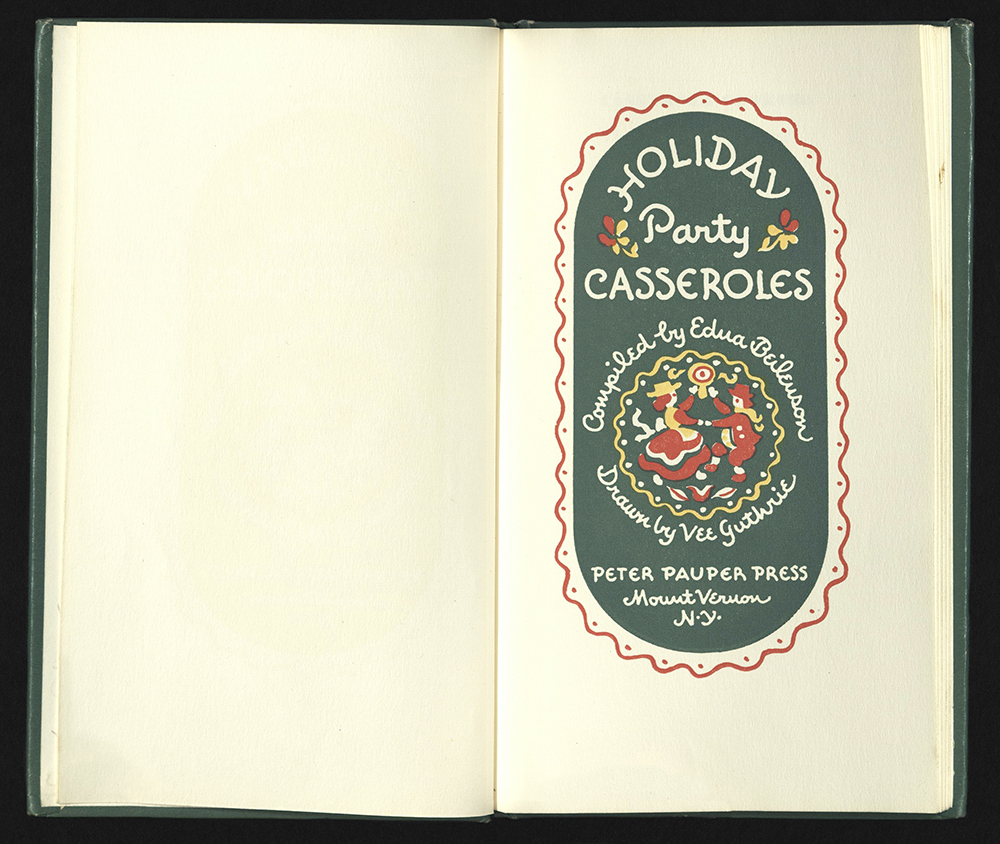 At the age of twenty-two, Peter Beilenson set up a small press in the basement of his father’s home in New York. With it, he designed and printed his first book, J.M Synge’s With Petrarch in a small run of just 200 copies. After being purchased by a New York bookseller, the volume became lauded as one of the “50 Books of the Year” by the American Institute of Graphic Arts. But Beilenson’s auspicious beginnings did not arise from nowhere. He had studied under the guidance of book and type designer, Frederic W. Goudy, along with printer William Edwin Rudge. 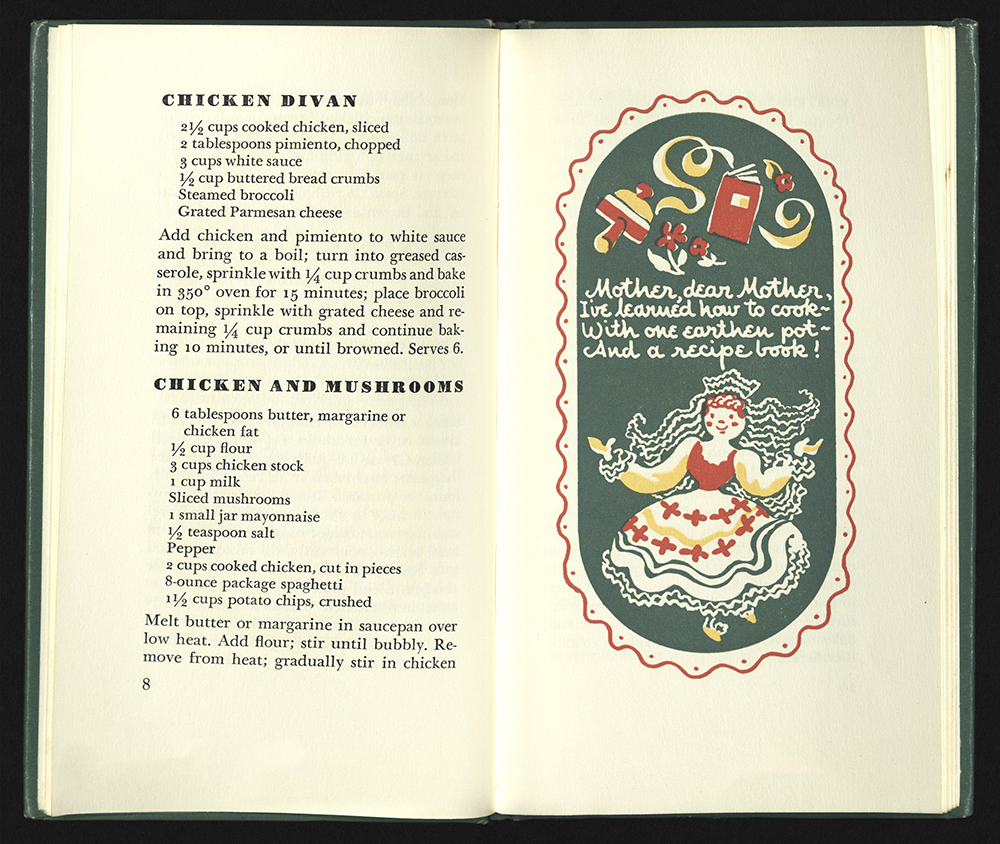 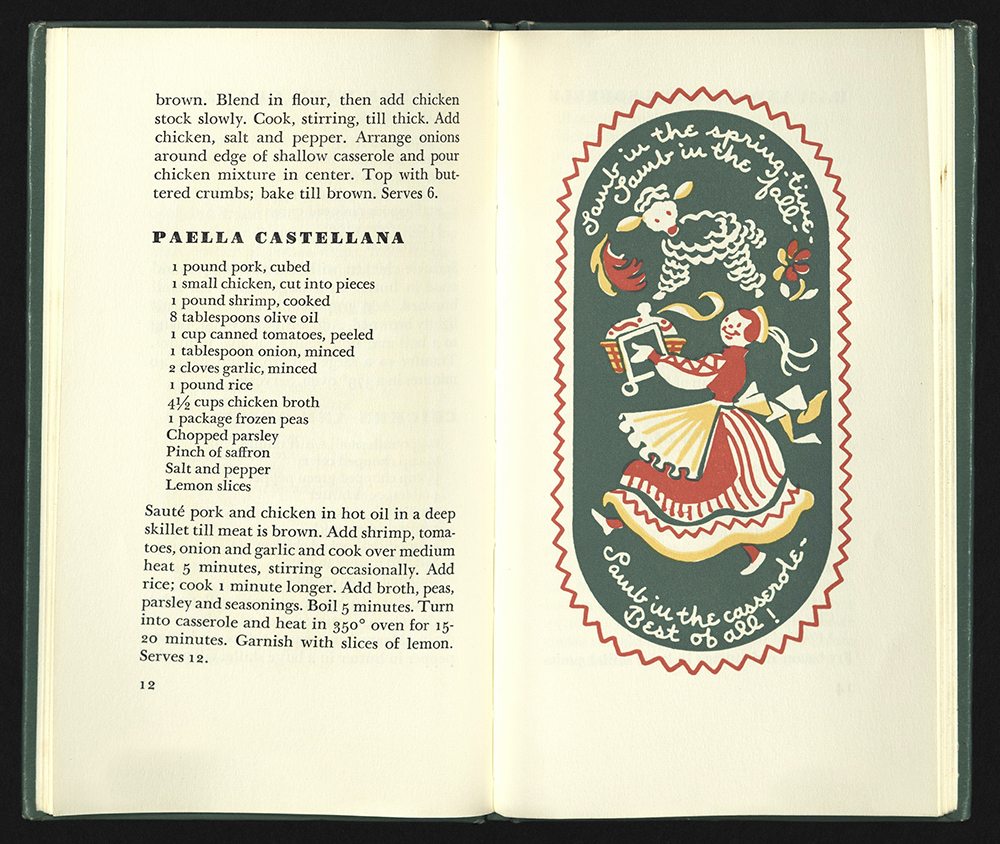 By 1929, Beilenson was joined by Edmund B. Thompson as a partner in the Walpole Printing Office, named after the eighteenth century author and private press owner, Horace Walpole. The press ran fine limited-edition runs, while Beilenson continued independently with less expensive options under the moniker, “At the Sign of the Blue-Behinded Ape.” When Thompson left the business three years later, Beilenson’s wife, Edna, became a partner. Together, they moved to Mount Vernon, New York to begin the journey that would become the Peter Pauper Press. There, the Beilensons printed special edition books for publishers such as Random House, New Directions, and the Limited Editions Club. 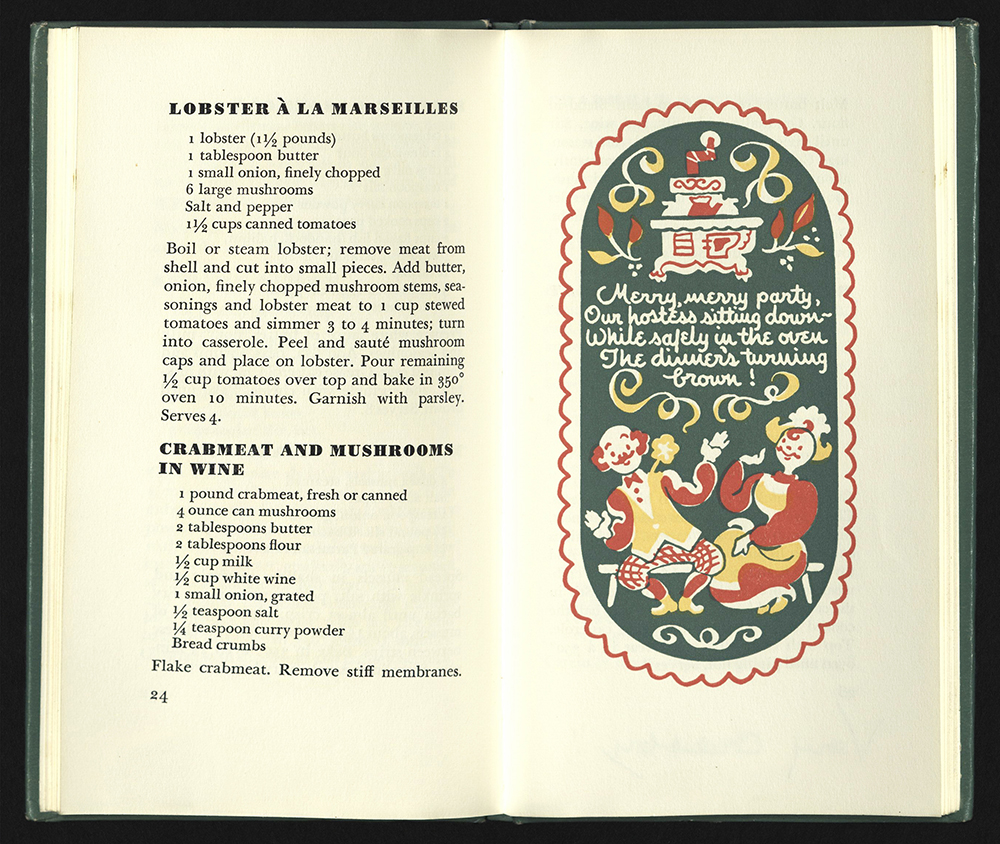 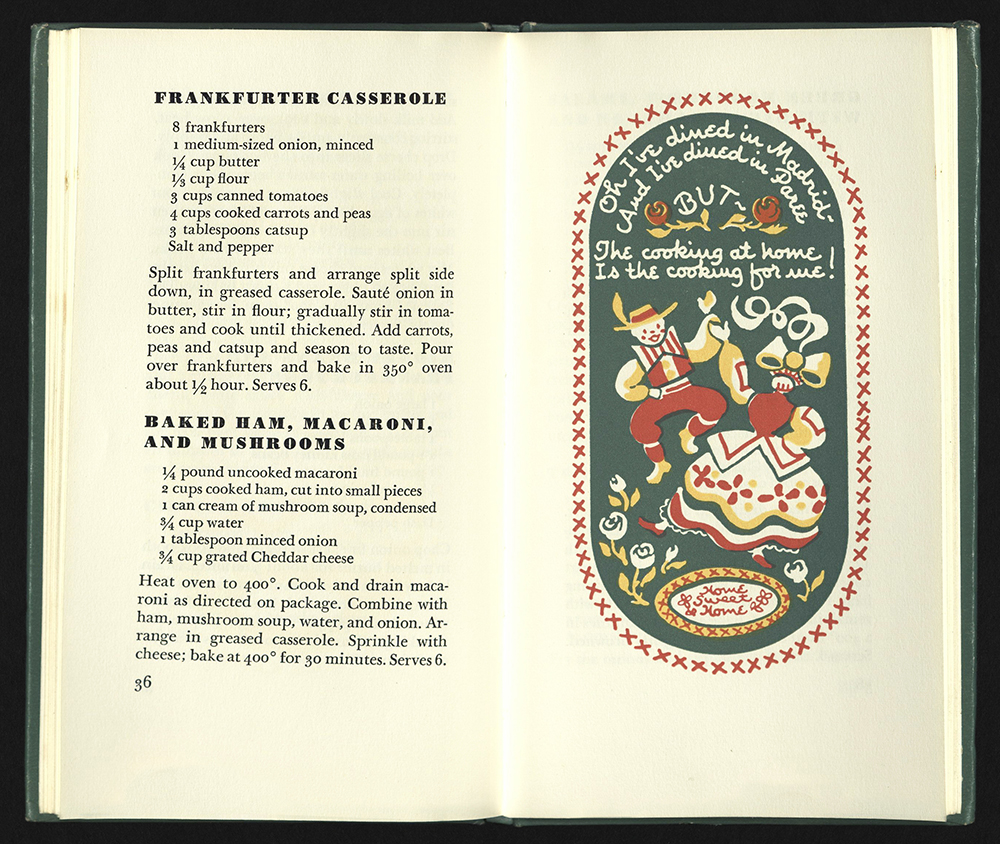 From the 1930s through the mid-century, the Peter Pauper Press produced beautiful letterpress volumes of both prose and poetry from the works of authors such as John Donne, Shakespeare, Benjamin Franklin, and many more. Despite being fine press books, the editions were sold at “prices even a pauper could afford” — referencing the name and philosophy behind the endeavor. The books included slipcovers, were made from handmade paper and often decorated in colored illustrations, woodcuts, and graphics created by the twentieth century’s most acclaimed artists, such as Valenti Angelo, Fritz Kredel, Fritz Eichenberg, Raymond Lufkin, Lynd Ward, Richard Floethe, and Vee Guthrie. 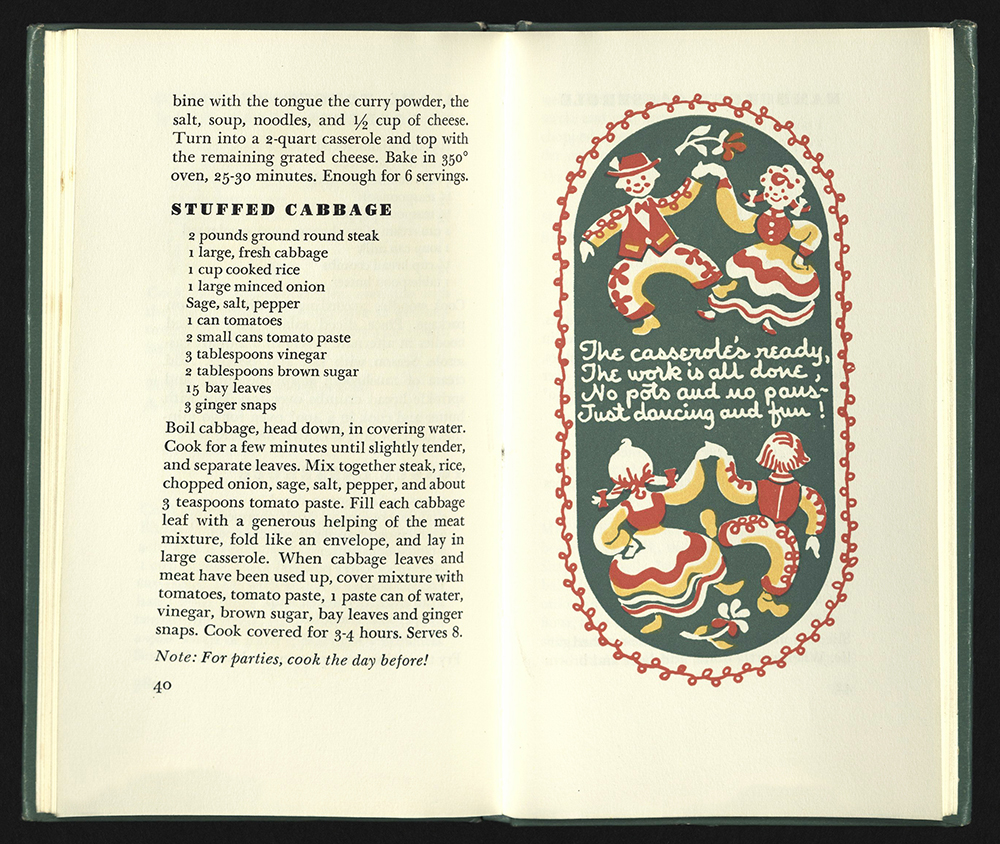 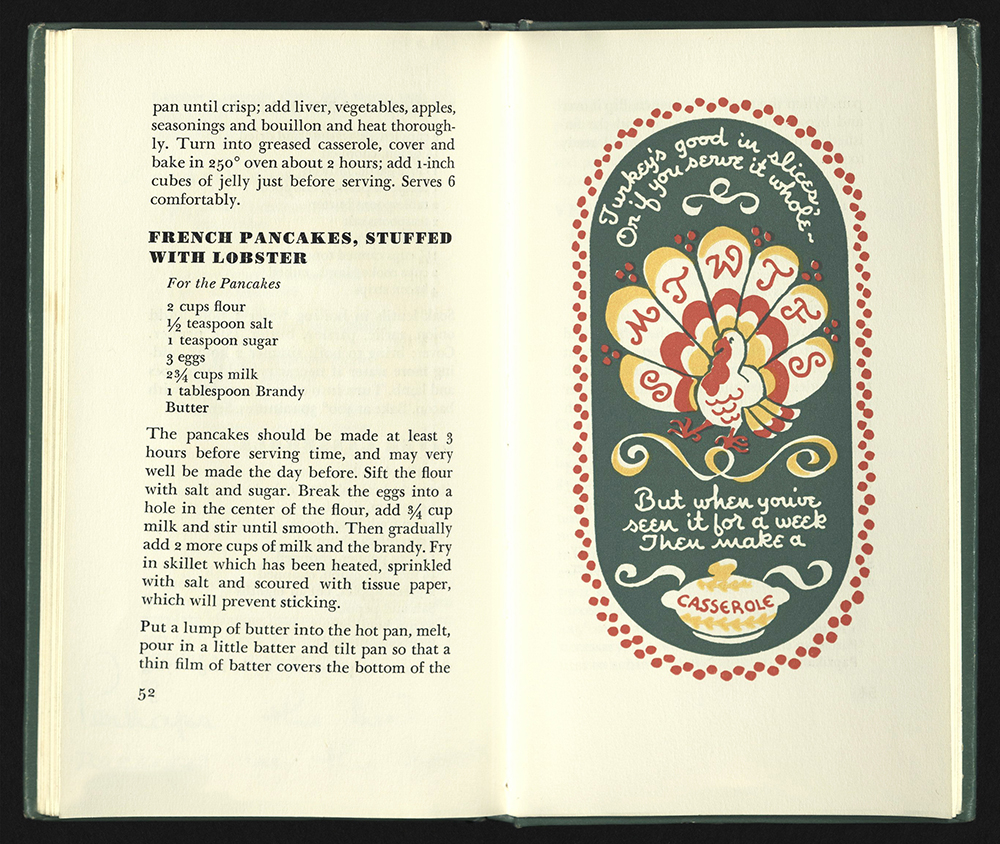 Guthrie worked with Edna Beilenson on a series of holiday cookbooks, starting in the 1950s. With handsome decorative bindings, the cookbook series covered everything “from abalone to zabaglione.” Edna took over the business after the death of Peter in 1962. In addition to her duties running the show, she was elected the first woman president of the American Institute of Graphic Arts, was among the first women elected to the Grolier Club, a president and chairman of the Board of the Goudy Society, and a fellow of the Royal Society of Arts. 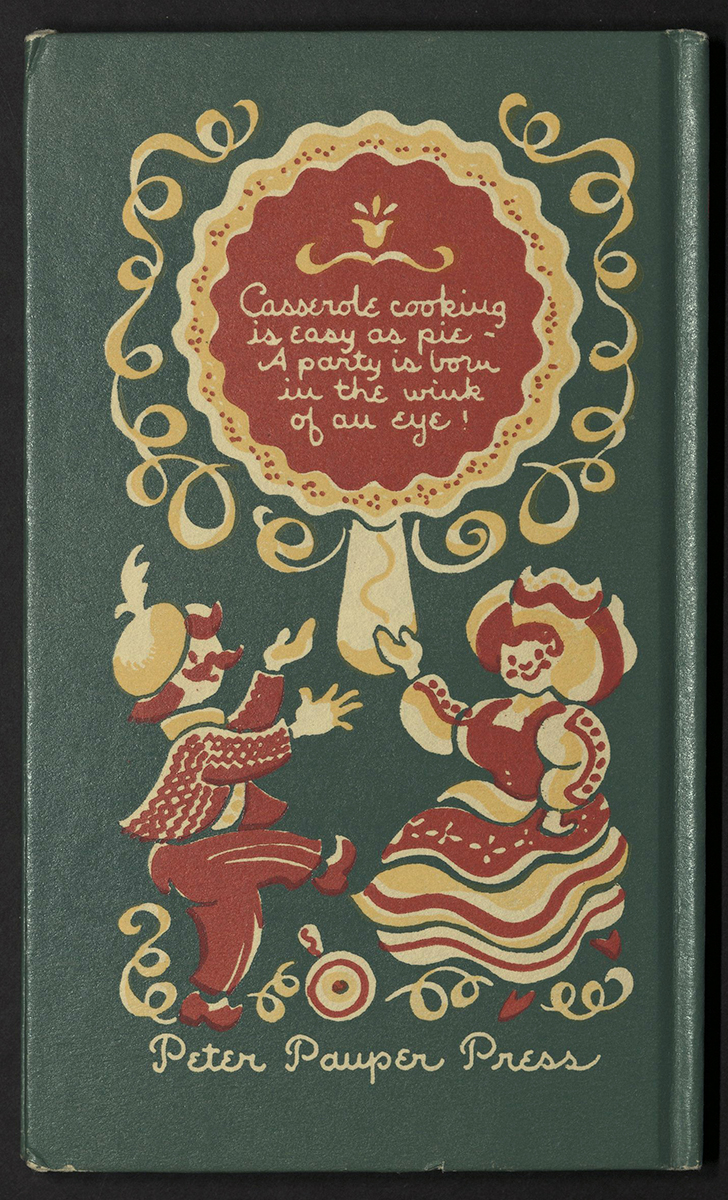 The presses kept running until Edna’s death in 1981, and then, almost stopped for good. However, the Beilenson children decided to change careers and relaunch the business, moving Peter Pauper Press to White Plains, New York. Today, the fine press and gift book editions are considered sought-after collectibles, which made “belles-lettres authors, exotic ingredients, and foreign figures available to mainstream U.S. consumers.”

Holiday Party Casseroles was set in Baskerville type and printed on specially-made paper. It was designed, printed and published at the office of the Peter Pauper Press in Mount Vernon New York, 1956.