12 Jul Book of the Week — Mountain and Water Book

Posted at 12:30h in Book of the Week, Rare Books by lyuba 0 Comments
7 Likes
Share

“If a scholar only stays in one place, he will be blocked by one small river and become narrow-minded and ignorant. He must travel everywhere to see human affairs, the social customs of the north and the south, mountains and rivers, and to broaden his knowledge.”

The word “landscape” often evokes images of natural scenery — mountains, valleys, trees, rivers, forests, or deserts framed within a wide range of view. As such, we often understand landscapes to be representative of geographic features, and seldom consider the broader relationships these landscapes have with the people who occupy them. Landscapes not only embody nature, they can also reflect habitats, artifacts, histories, locations, ideologies, politics, and cultures. 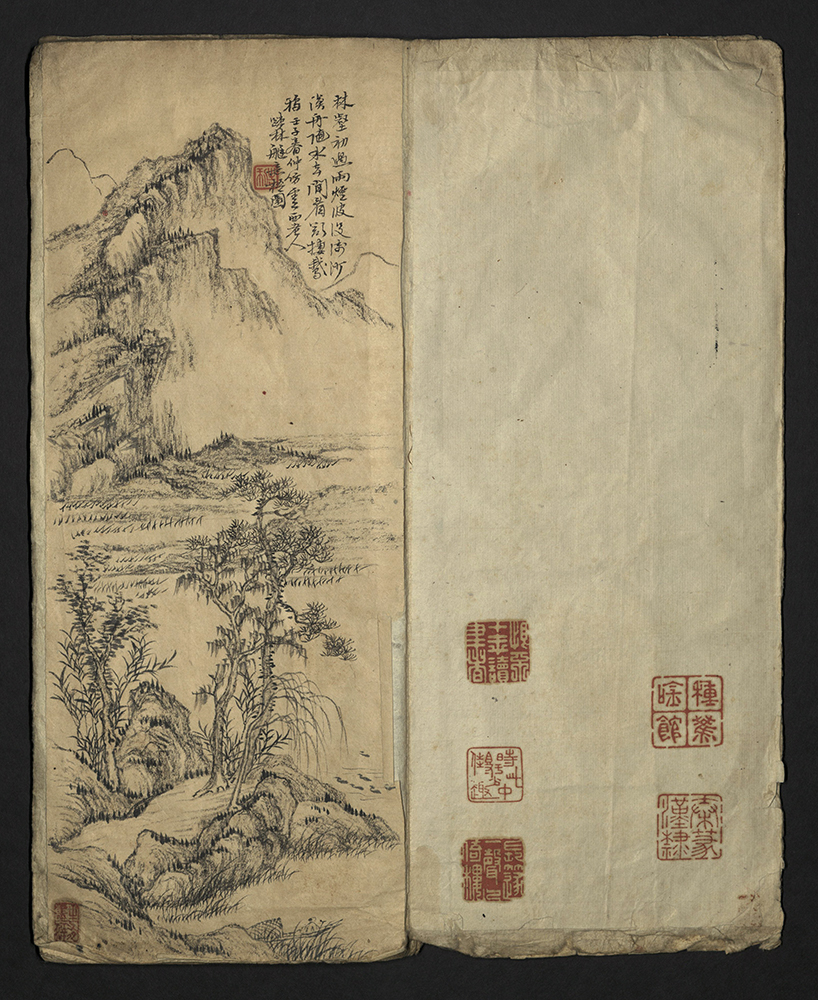 Landscape art is a prominent genre in Western and East Asian art traditions, both going back well over one thousand years. In the East Asian tradition, landscape painting draws on Daoism and other philosophical schools of thought, first originating in China. Landscapes take the center stage and represent the connection between the human, natural, and spiritual world. In Korea, landscape painting evolved to what is known as jingyeong sansuhwa or  “true-view landscape paintings” — a genre of landscape painting that expresses both the actual geography of Korea, as well as layers of sociopolitical and cultural meaning embedded within the scenery. 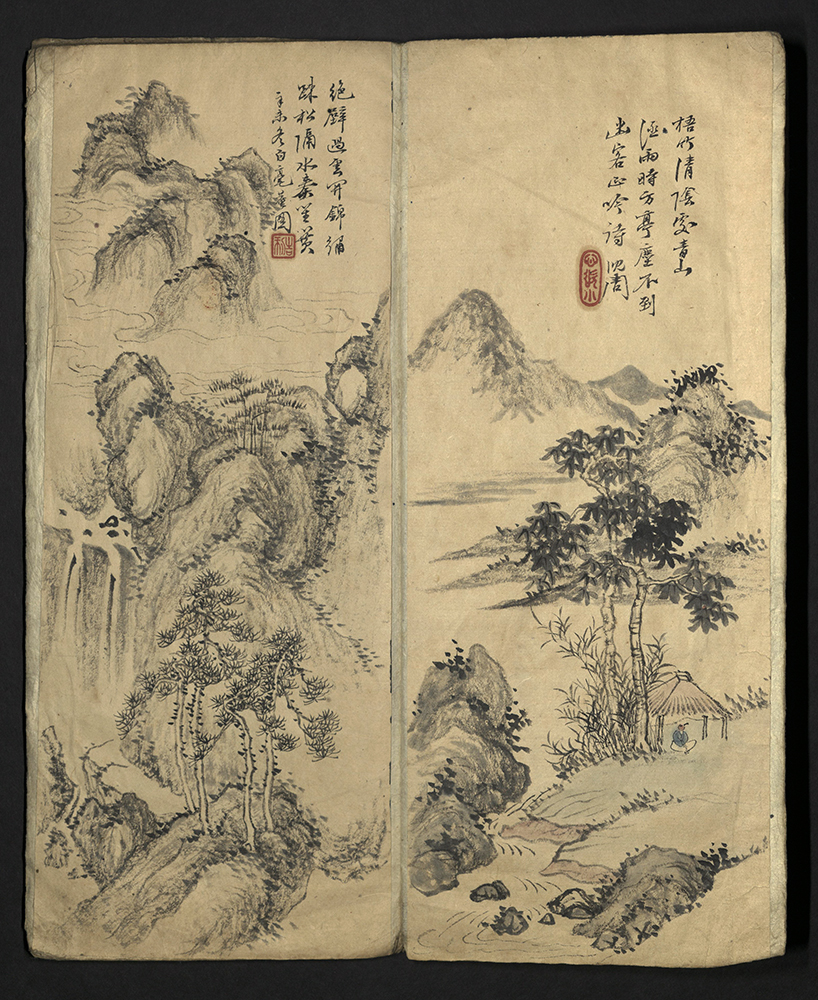 Korean artist Jeong Seon (1676-1759) is credited as being the father of true-view landscapes and bringing about the “Koreanization” of painting during the Joseon dynasty. Prior to the eighteenth century, paintings of Korean landscapes were not common, until sites around the region were made famous by Jeong Seon. One of the most popular landmarks ever painted was Mount Kumgang — part of the larger Taebaek range, which runs along the eastern side of the Korean Peninsula. Mount Kumgang, or Diamond Mountain, is located in what is now North Korea. It has been known for its scenic beauty for hundreds of years, and nearly all the poets and artists of the Joseon dynasty were said to have made pilgrimages there, despite the challenging terrain. 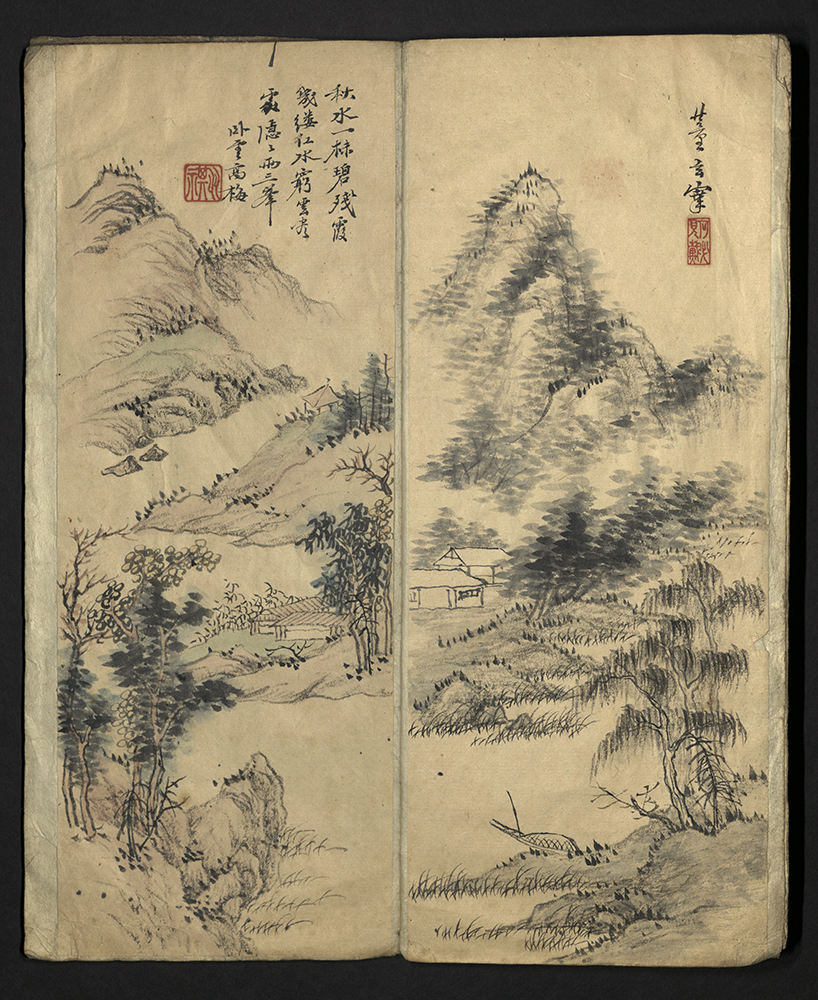 Contemporaries of Jeong Seon, and those who came later, followed and expanded upon the true-view landscape genre. One of those artists was Jang Seung-eop (1843-1897), who went by the pen name, Owon. Owon grew up as an orphan and was later taken in by an aristocrat named Yi Ung-ehon. In this household, he was provided the opportunity to paint extensively, learning all the popular genres of the time such as flower painting, painting of daily life, and landscape painting. Today he is remembered as one of the “Three Wons” of the Joseon-period, along with Danwon (1745-1806?) and Hyewon (1758–1813). Owon was also one of a few painters to hold a position of rank in the Joseon court. 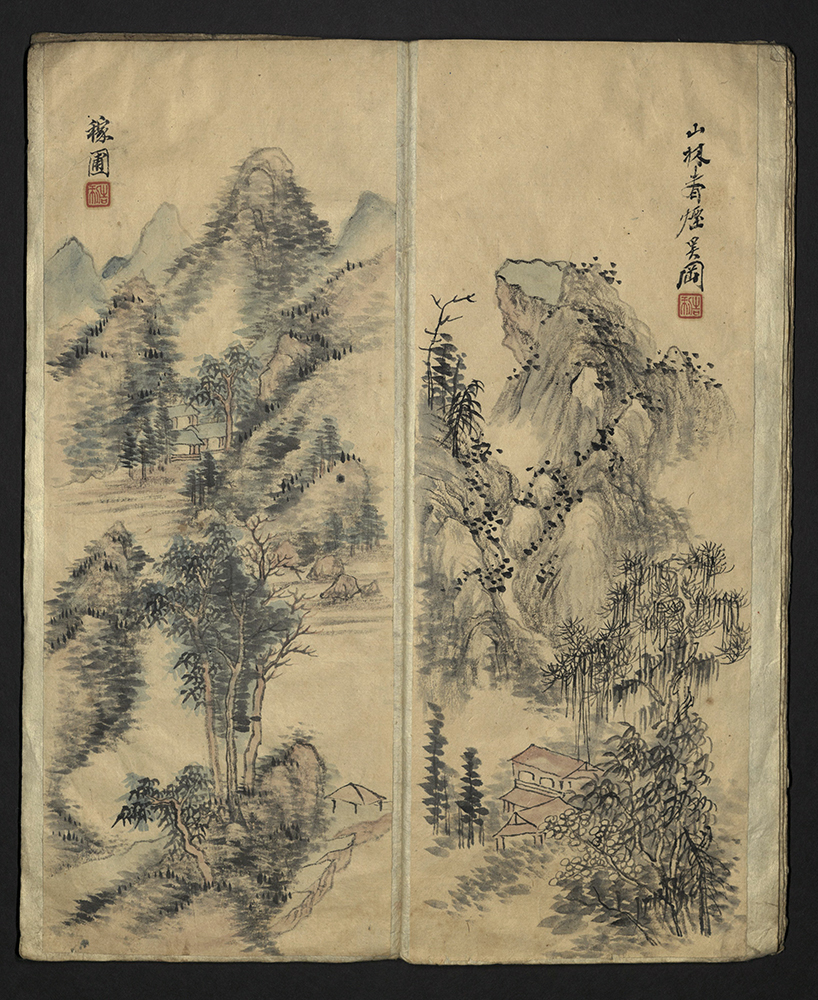 The Joseon dynasty was the last and longest ruling Korean kingdom, reigning for approximately five hundred years. Founded by Yi Seong-gye in July 1392, the Joseon dynasty presided over two periods of incredible cultural growth. In addition to landscape paintings, other genres of art such as chaekgeori (paintings of books) and munjado (paintings of letters) flourished — revealing a deep love of learning and knowledge. The royal dynasty also created the first Korean tea ceremony, Korean gardens, extensive historic works, fortresses, and palaces. All of which left a substantial impact on the culture of modern-day Korea. However, after years of internal strife, power struggles, and international pressure, the Joseon dynasty ended in 1910 when Korea was annexed by Japan, until its liberation in 1945. 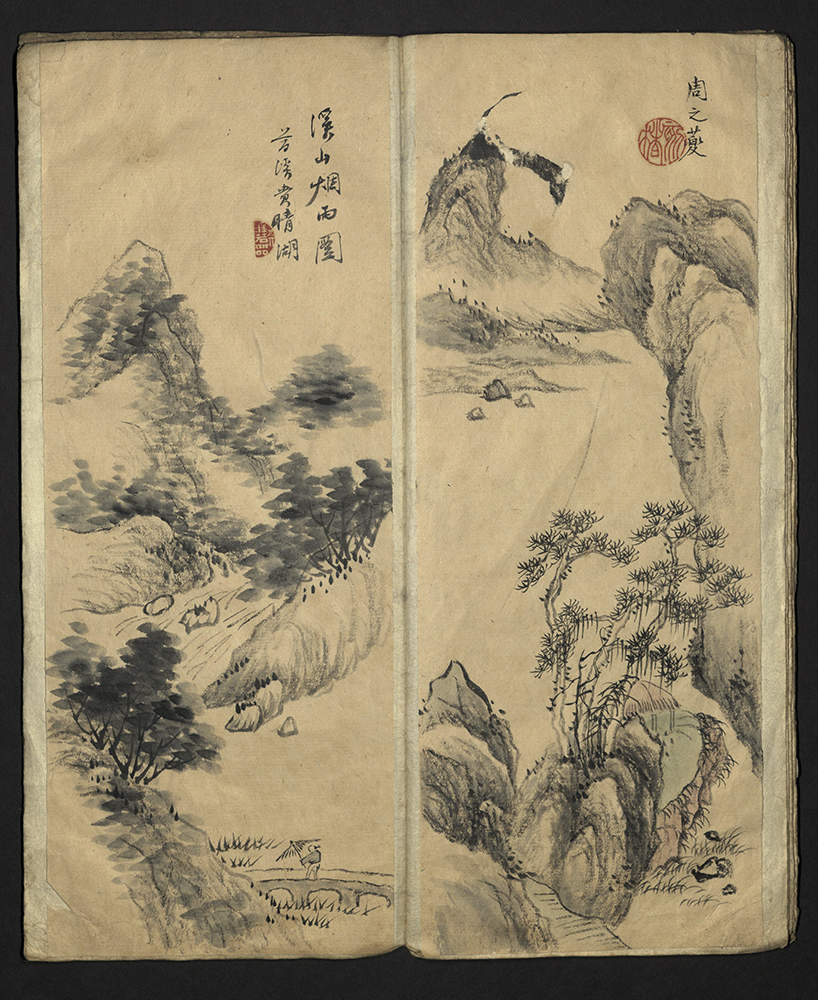 Some historical scholars argue that true-view landscape paintings were never really about nature itself. The landscapes — paintings of real places in Korea — reveal what J.P. Park describes as “the creation and maintenance of elite identity, as well as the social positioning that was anchored in official titles, social networking, academic and cultural accomplishments, family reputation, economic status, and the personality cult of eminent scholars.” In short, the landscapes are not simply natural wonders, they function as an assertion of power and are regarded as both the inspiration and visual expression of the diverse issues occurring at the time. 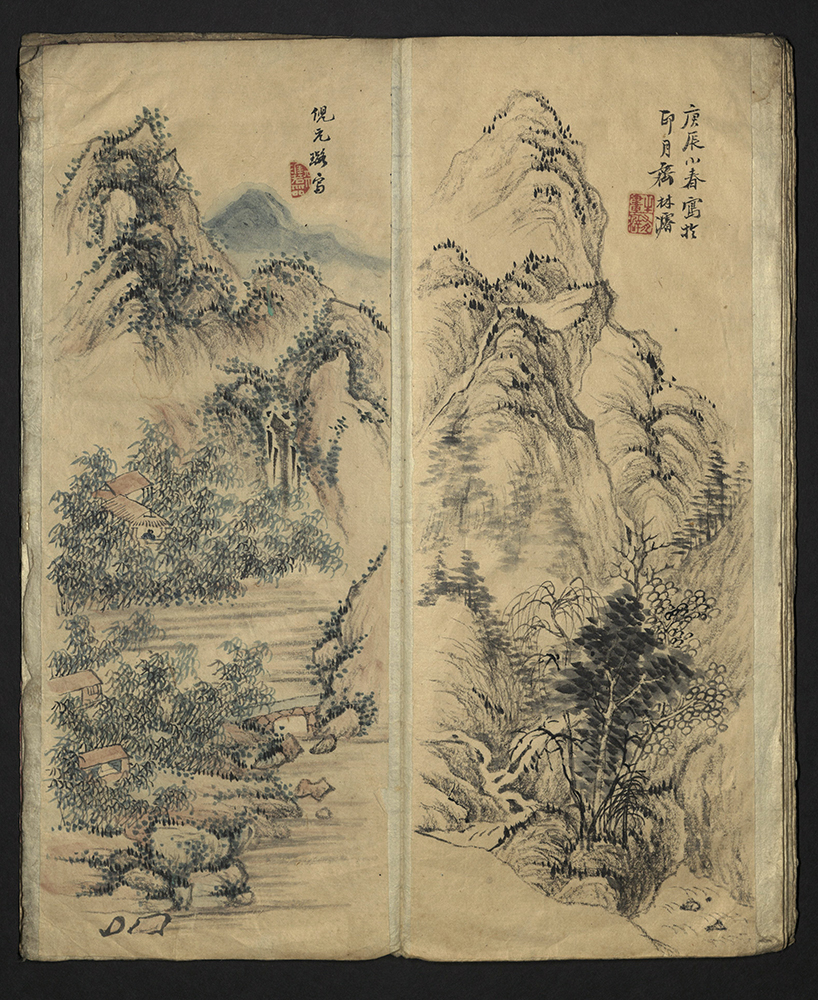 Despite this, or perhaps because of it, the landscapes are seen as sacred symbols, wherein the traveler comes to learn of their own true nature, qualities, and persona. From the perspective of Confucianism (a philosophical ideology that was prominent during the Joseon dynasty), to travel is to develop a grand view of the world in line with the ideals of self-cultivation. Or, in the words of Hu Yuan, a Song dynasty scholar, “If a scholar only stays in one place, he will be blocked by one small river and become narrow-minded and ignorant. He must travel everywhere to see human affairs, the social customs of the north and the south, mountains and rivers, and to broaden his knowledge. This in turn will benefit the scholar.” 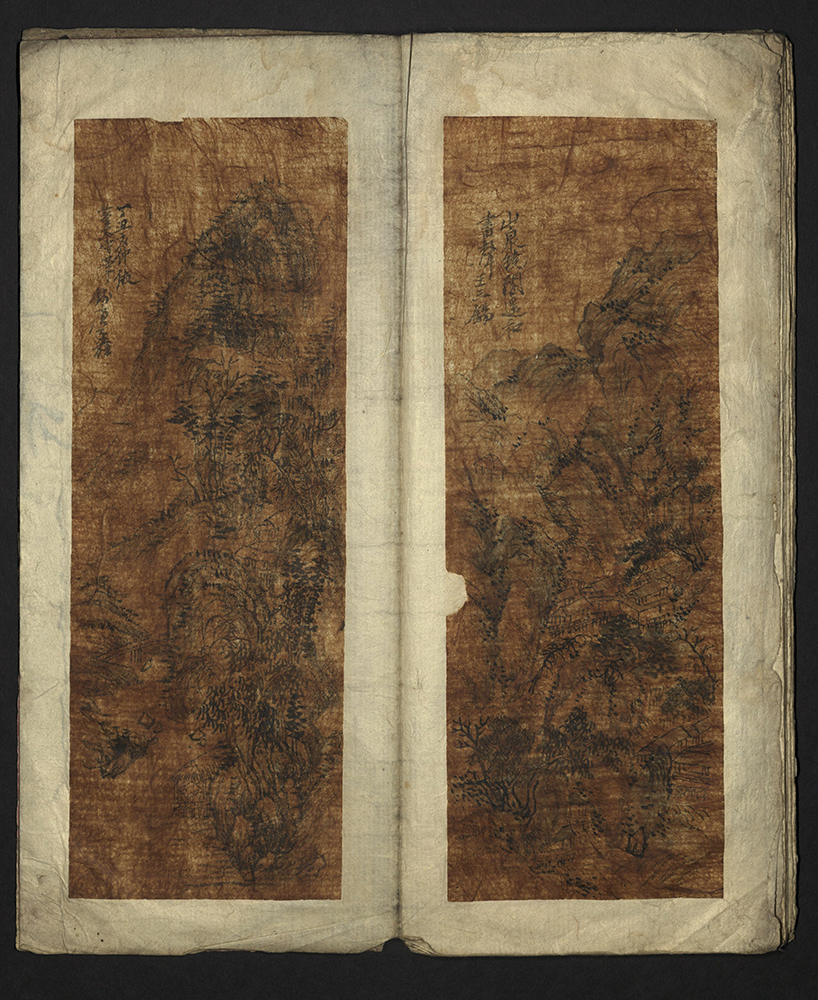 The paintings in this book allow the reader to travel across various mountain landscapes. The book was published in 1880 and has been attributed to the Joseon artist, Owon. The title on the cover reads Mountain-River Album of the Wu Garden, but elsewhere has been referred to as O Wŏn sansu ch’aek, a literal translation being “O Won mountain (and) water book,” or “A book of mountain and water paintings by Owon.” Accompanying each of the decorated pages are poems describing the scene, written in Classical Chinese — typical of most documentation in Korea in the premodern period. It is difficult to determine, however, if the poems were written by Owon himself, or if they are quotations. In addition to the text, red stamps refer to different names. These names might belong to Owon, as artists often had more than one name they went by. Or, the stamped names could be from various collectors of the book, with each new owner stamping a page to claim ownership.

Although the last owner of this book did not include his own stamp, he did leave a lasting impression on J. Willard Marriott Library. Owon’s Mountain and Water Book was donated to the library by Lennox Tierney (1914-2015), Professor Emeritus at the University of Utah’s Department of Art and Art History. Professor Tierney first came to Salt Lake City in the 1970s and served as the Associate Dean in the College of Fine Arts while also teaching courses on art history, with an emphasis on Japan. Prior to his time at the University of Utah, Professor Tierney worked to repair and preserve cultural sites, art, and monuments bombed and destroyed in Japan during World War II. For his work promoting the understanding of Japanese history and culture among American students, Professor Tierney was awarded the Order of the Rising Sun by the Japanese government in 2007.

His donation to the J. Willard Marriott Library includes 250,000 slides, film reels, and lecture videos, with more than 11,000 digitized images and 55 hours of oral history available to access online. For more information about the Lennox Tierney collection visit:

A big thank you to Professor Deberniere Torrey and Professor Fusheng Wu of the World Languages and Cultures Department for providing translation help.