03 Oct Book of the Week — Mushrooms, Russia and History

“This book is addressed to those who love mushrooms, who love the whole rich world of wild mushrooms in the same way that many love the flowers of the field and the birds in the air.” 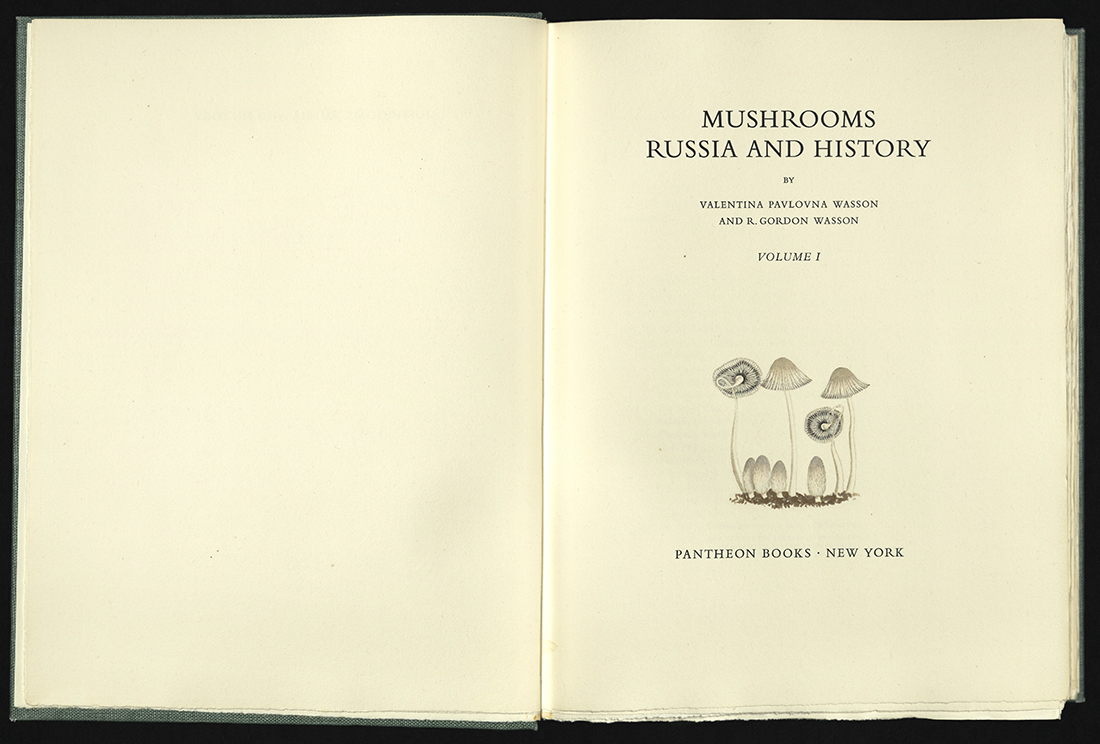 In 1927, while out on a delayed honeymoon in the Catskills, Gordon Wasson and his new wife, Valentina Pavlovna, came across a batch of wild mushrooms growing in the forest. “Tina” raced over to the carpet of dried leaves and knelt in poses of adoration before one cluster, and then another, gathering up the mushrooms right and left into her skirt. As a Russian émigré, she was overcome with joy at the sight of the same fungi that she would find in her mother country. Gordon, on the other hand, was revolted. Fearing the poisonous reputation of the “toadstools,” he refused to eat anything Tina cooked that night (she added mushrooms to everything). He fell asleep worrying he would wake up a widower. When the newlyweds did wake up the next morning, both alive and well, they mused about their diverging attitudes towards the fungus, theorizing that the differences must have roots in the folkloric traditions of Europe. From this hypothesis, they decided to embark on a decades-long journey into the study of “mycophiles” and “mycophobes” — those who like mushrooms, and those who don’t. 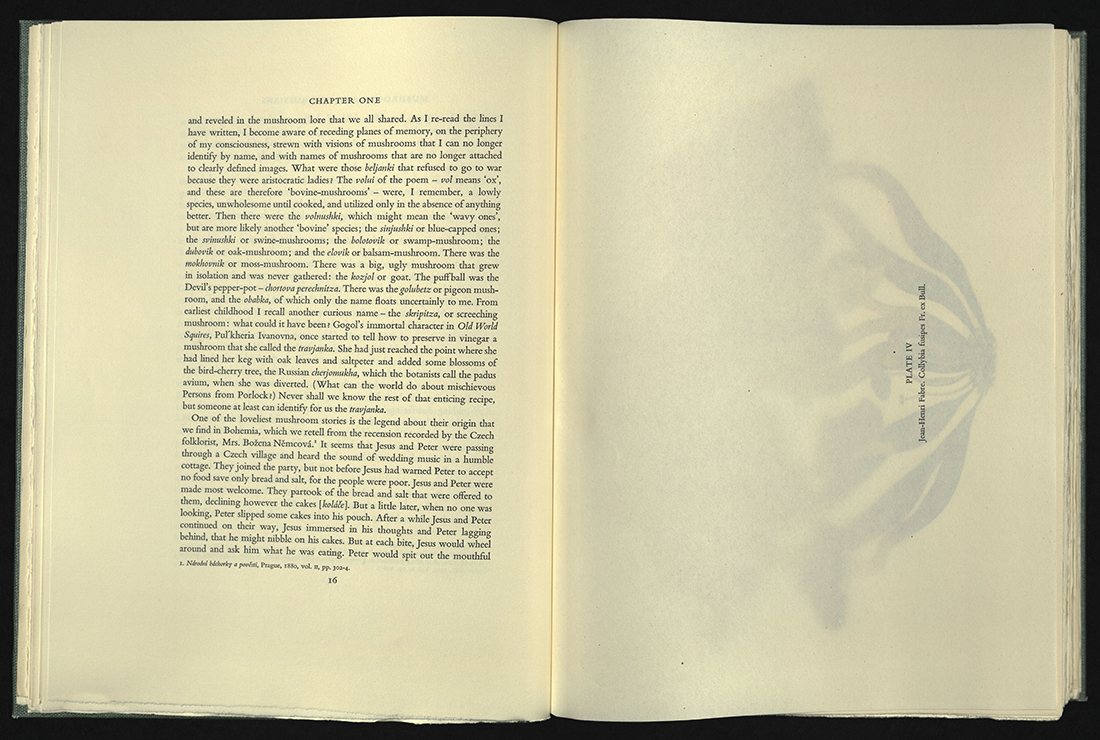 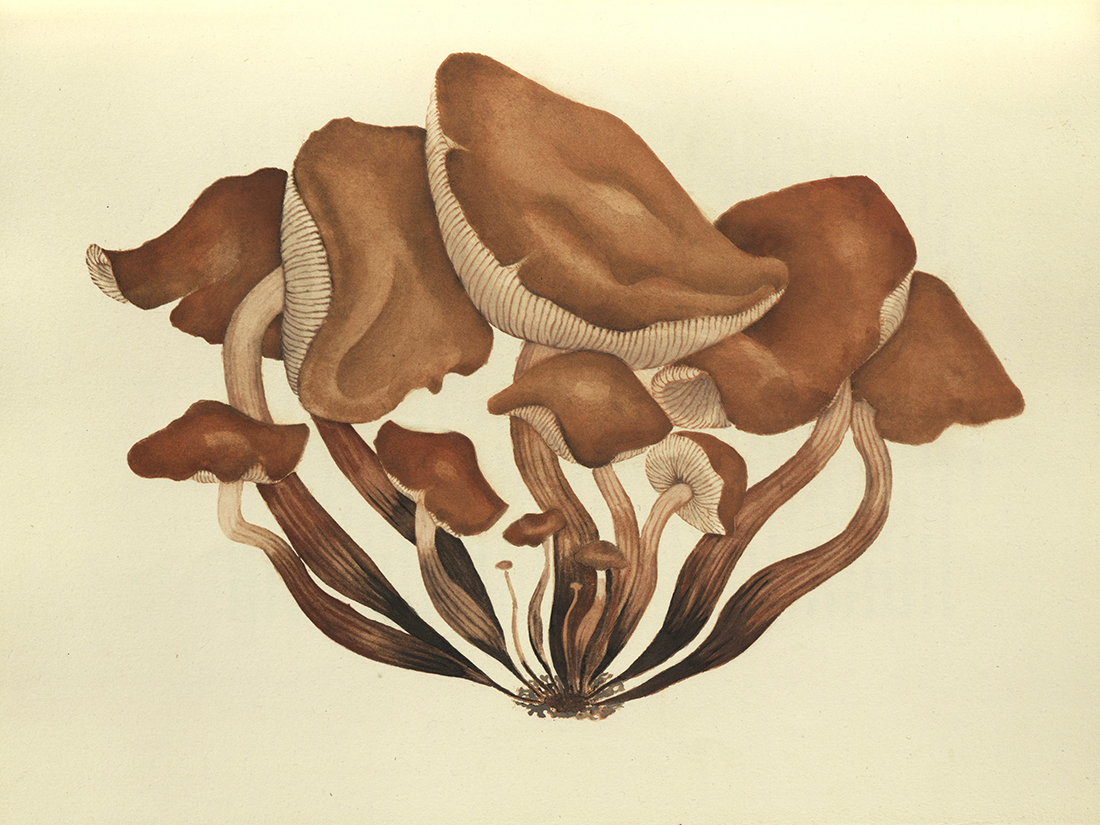 Originally a journalist, Gordon Wasson had moved to England to study at the London School of Economics. While in London, he was introduced to Pavlovna, who was also enrolled at the university and studying to be a doctor. They married in 1926 and moved to New York, where the memorable mushroom foraging scene would take place just one year later. Wasson soon left journalism for banking, working for J.P. Morgan. Meanwhile, Pavlovna began her distinguished career as a pediatrician, publishing research on sinusitis and rheumatic fever in children. Despite their day jobs, both Wasson and Pavlovna were self-proclaimed “ethnomycologists” — a term Wasson coined to describe their ambitious research into the cultural, medical, and religious uses of fungi throughout the world. 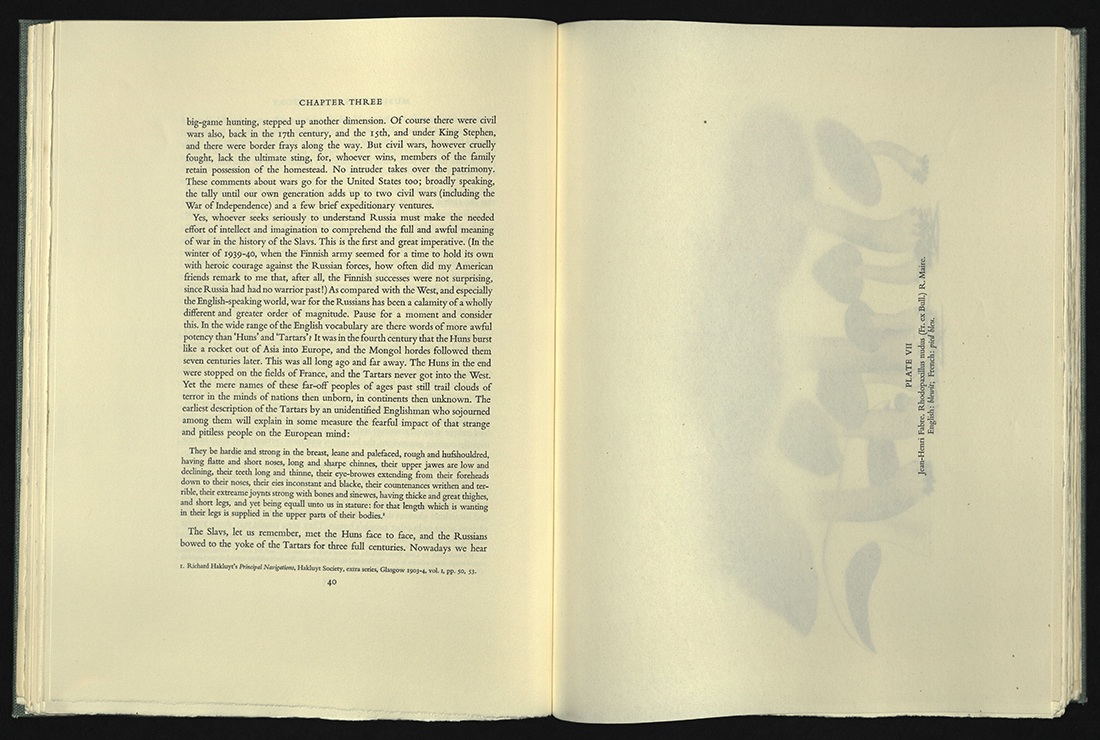 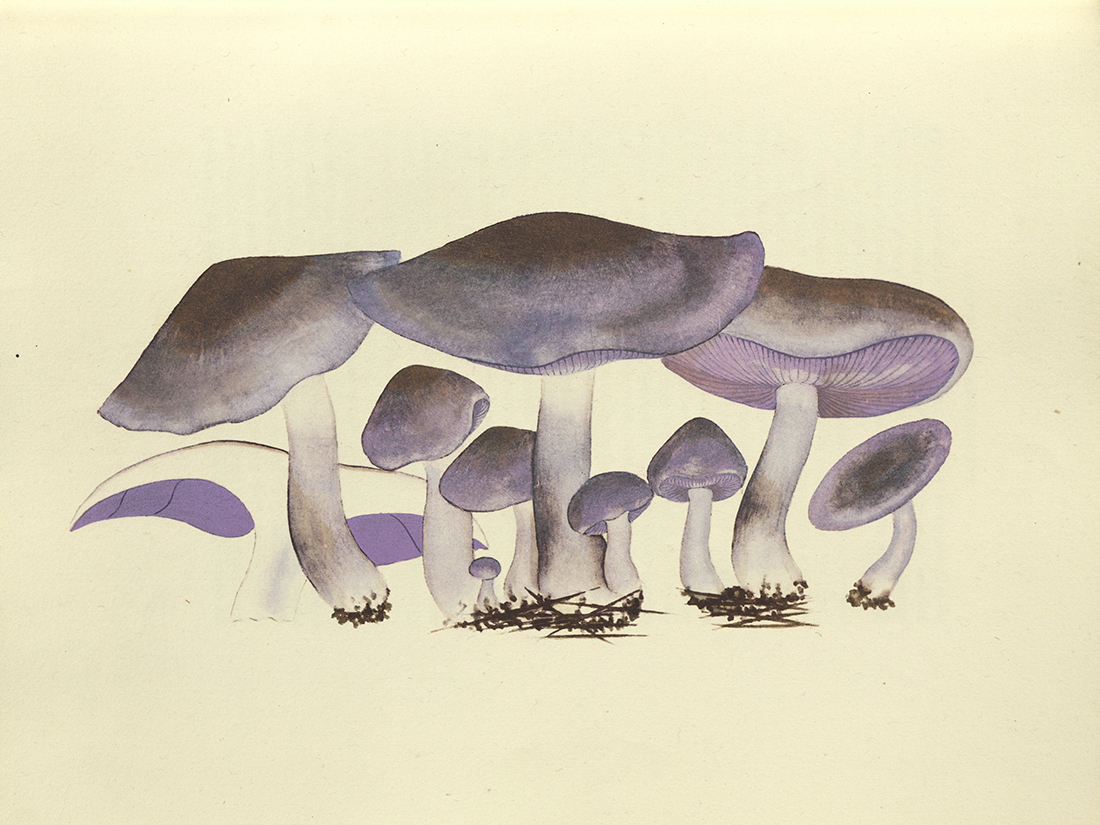 Over the course of three decades, the Wassons took on a vast collection of material on mushrooms. Their family vacations took them to areas where people were known for their love of mushrooms: Friesland, Lapland, Provence, and the Basque country. They received letters from friends — and friends of friends — with articles, news clippings, and books about mushrooms. They corresponded with missionaries, linguists, and anthropologists all over the globe trying to identify areas where mushrooms possessed significant religious or culturally sacred status. On September 19, 1952, two letters would shift the Wasson’s research and focus away from Europe and toward Mesoamerica. The first was a drawing of a pre-conquest Guatemalan stone carving representing a mushroom; the second was a letter from the poet Robert Graves, calling their attention to an article by Richard Evans Schultes, the famed ethnobotanist. In the article, Schultes presented evidence of a “mushroom cult” in Mexico; he had even brought back specimens of the supposedly “magic” mushroom for study at the Harvard Botanical Museum. Schultes claimed to have witnessed a shamanistic ritual in which they were used, though he made no claim to having ingested the mushrooms himself. 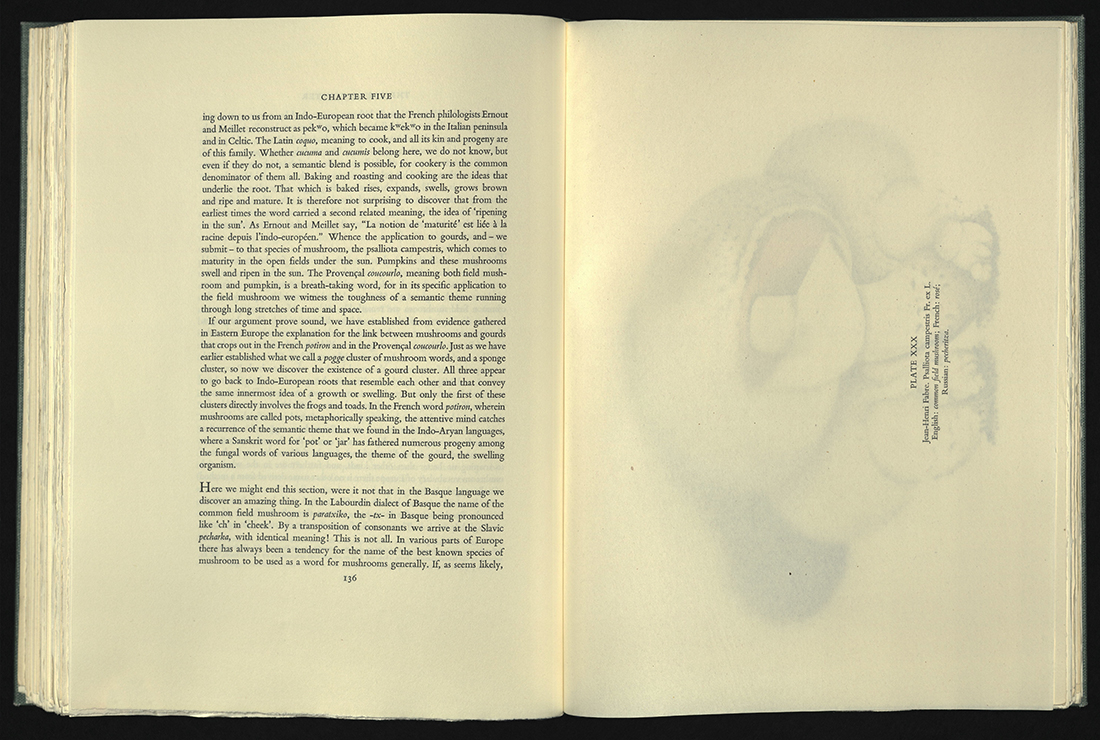 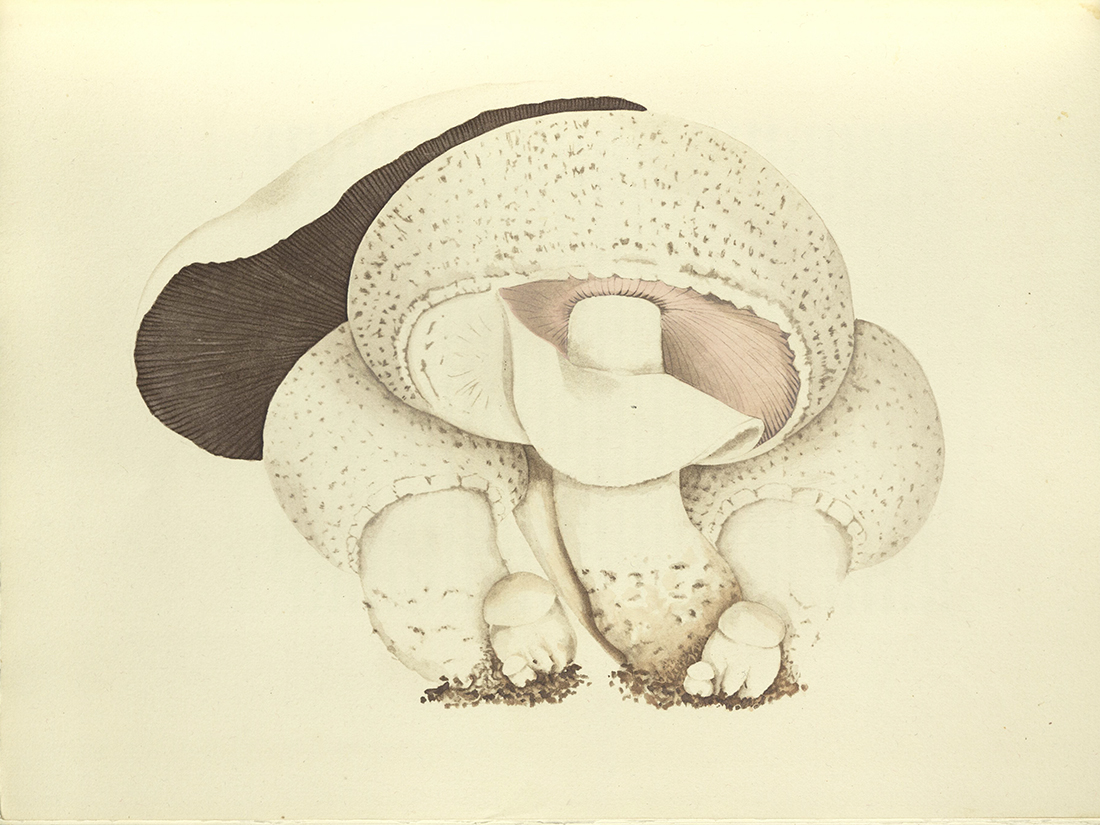 Beginning in 1953, Gordon and Valentina Wasson organized yearly research expeditions to the remote mountain villages of the Mazatec Indians of Oaxaca, Mexico — specifically, Huautla de Jiménez. These field trips were covertly (and unwittingly to Wasson) funded by the CIA’s MK-Ultra Program. By 1955, they were among the first outsiders to participate in the ritual rites, or veladas, of the cult of the sacred mushroom, led by the curandera María Sabina. Their research into the world of fungi had culminated with their joint experiences in Mexico. What had originally started as a mushroom cookbook had now grown into an extensive two-volume work on the “gentle art of mushroom-knowing,” titled Mushrooms, Russia and History. The privately-published book was a compendium of folklore, art, history, and anthropology. While volume one features a dense and vibrant account of the world of mushrooms in Russia and parts of Europe, volume two focuses on the Wasson’s experience in Mexico, including pictures and art from their visit. Although published as a jointly-written venture, the bulk of the research can be credited to Tina. Only 512 copies were published, at $125.00 a piece – priced well beyond the reach of all but private collectors and university libraries. 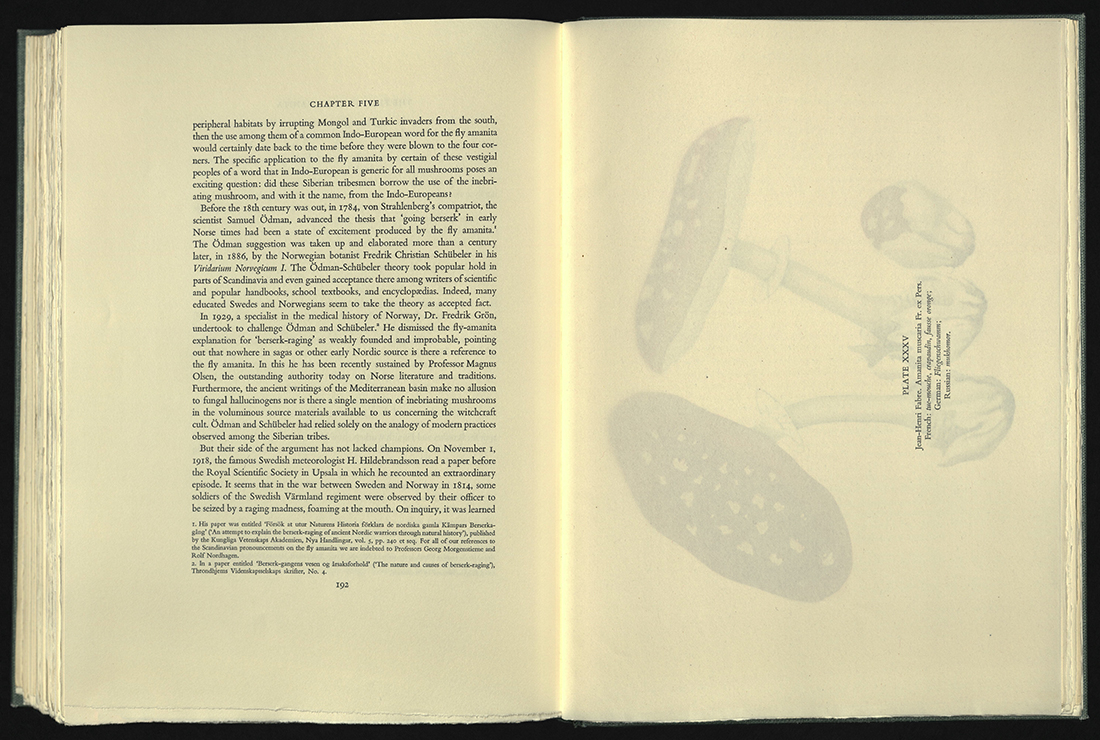 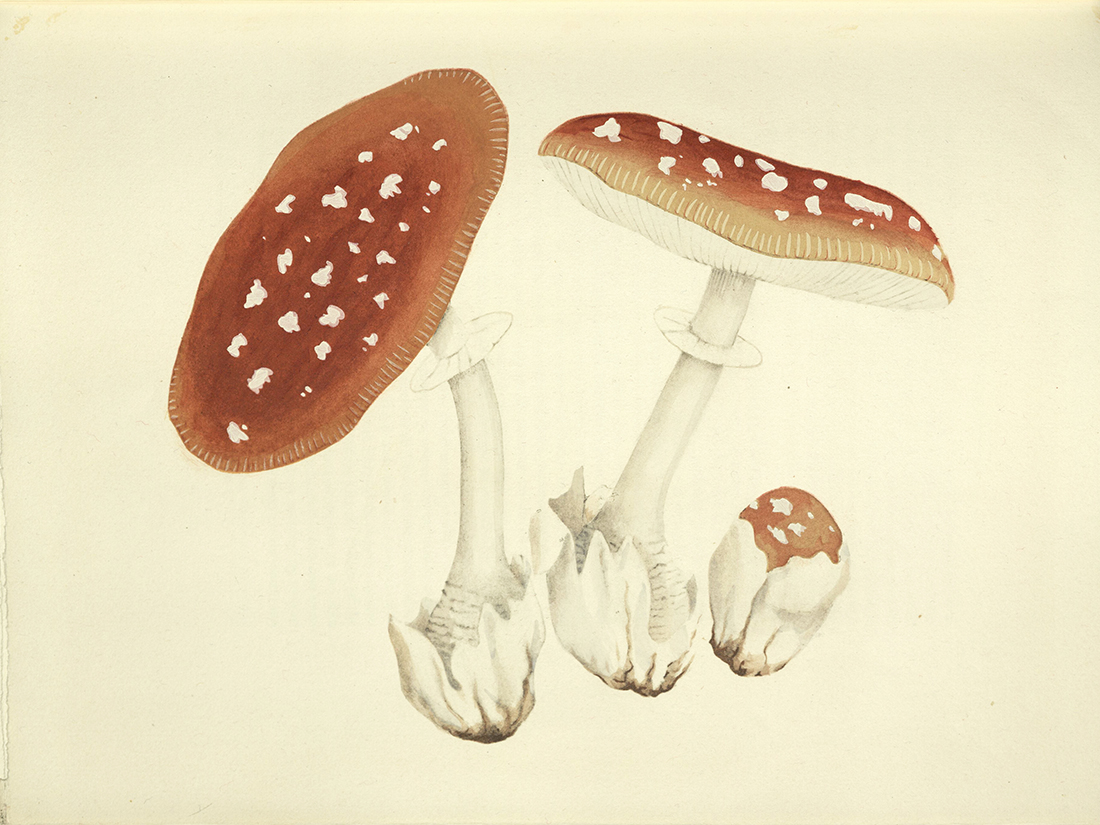 Within the two volumes are a series of mesmerizing water-colors of a variety of mushrooms, painted by the French naturalist, entomologist, and author Jean-Henri Fabre. Although most recognize Fabre as a close observer of insects, few know that he devoted many hours of his life, in the decade that followed 1885, to painting mushrooms in water-color. After his death, hundreds of Fabre’s paintings were left on the shelf of his study at Sérignan, as fresh in color as the day he painted them, on excellent stock, assembled neatly in the folders where he laid them. He painted all his mushrooms their natural size, save one that was too big for his paper and that he never succeeded in identifying. Although he had sought a publisher for them, he was never assured that the colors would be truly rendered, so he chose to leave them waiting on the shelf.

The Wassons were introduced to Fabre’s paintings by the French mycologist, Roger Heim of the Museum National d’Histoire Naturelle — where the paintings were held. For the reproductions, the collection was handed over to the atelier of Daniel Jacomet in Paris, who recreated the images in their original size by the pochoir process. 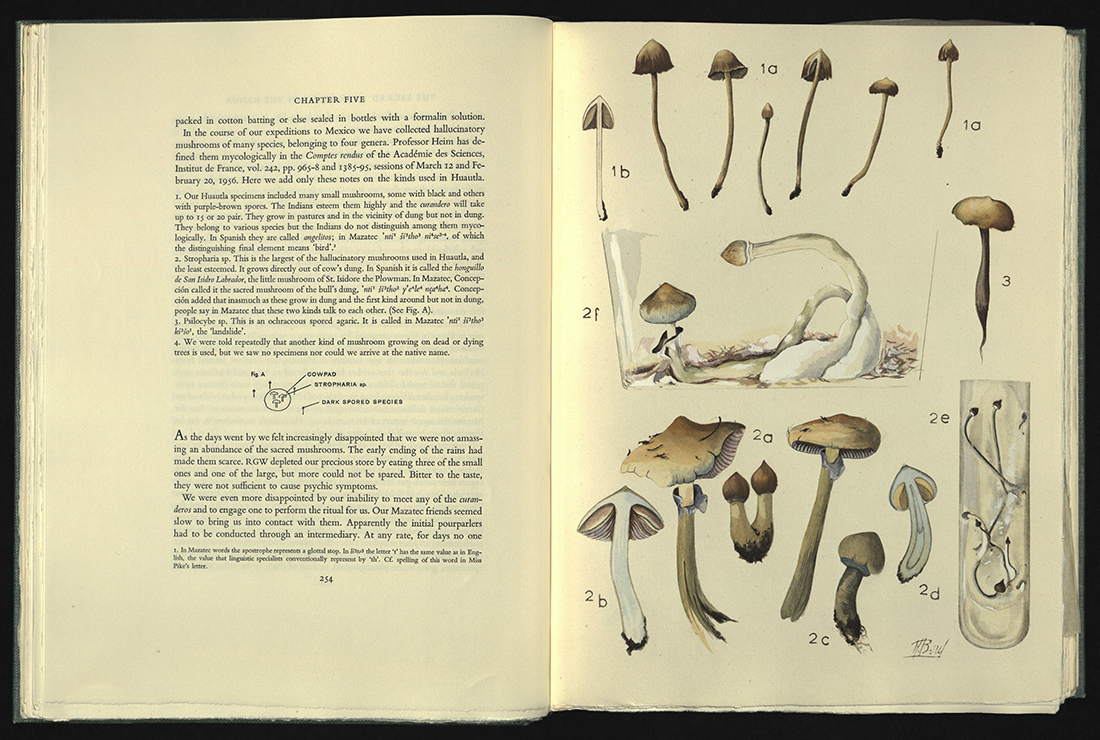 “There exist certain species of wild mushrooms that contain a most potent and mysterious drug—
mushrooms which, if you eat them, cause you to see visions,
breathtakingly vivid visions in color and motion,
visions of almost anything you can imagine except the scenes of your everyday life.”

Almost immediately following their publication of Mushrooms, Russia and History, Gordon Wasson’s article “Seeking the Magic Mushroom” was published in Life Magazine. Joining her husband, Tina published her own article, “I Ate the Sacred Mushroom,” just days later in This Week— a nationally syndicated Sunday magazine supplement that was included in American newspapers, with a total circulation of twelve million readers. The articles focused on the Mexican mushroom veladas guided by María Sabina.

For the first time in history, significant attention to the use of hallucinogenic mushrooms was brought to the public eye, ushering in the age of psychedelics. The following year, Swiss chemist Albert Hoffman (who earlier discovered lysergic acid diethylamide, or LSD) isolated and named the entheogenic compound that triggers the visions induced by eating these special mushrooms. He called it psilocybin. 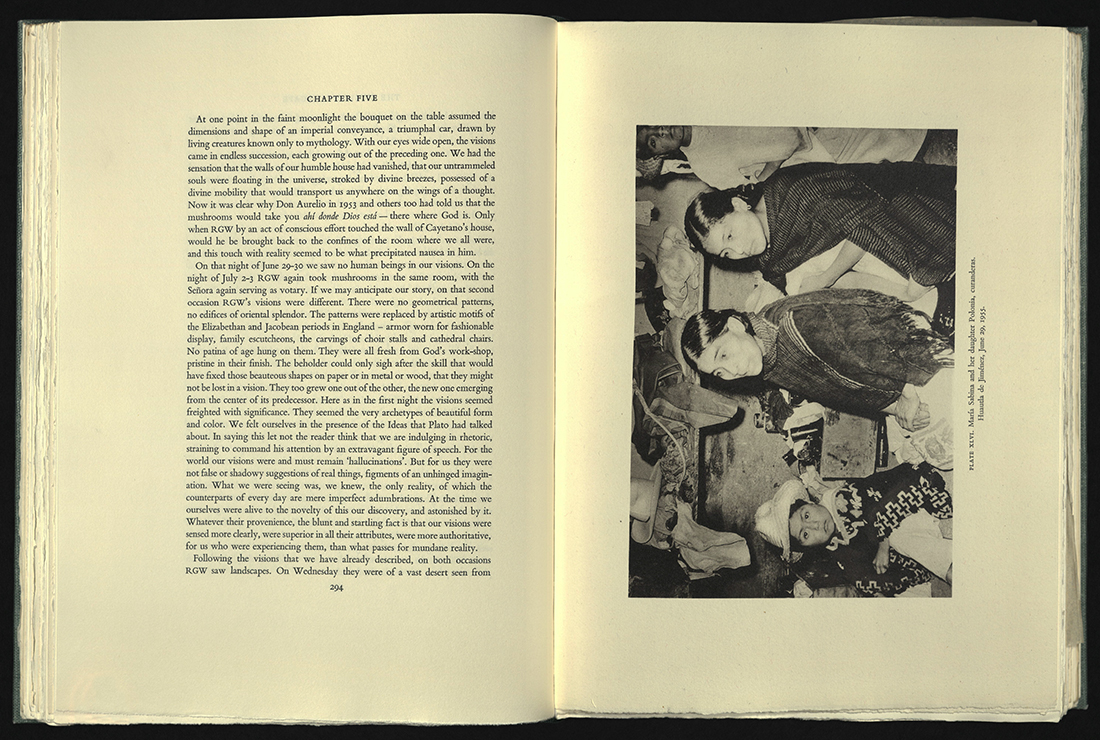 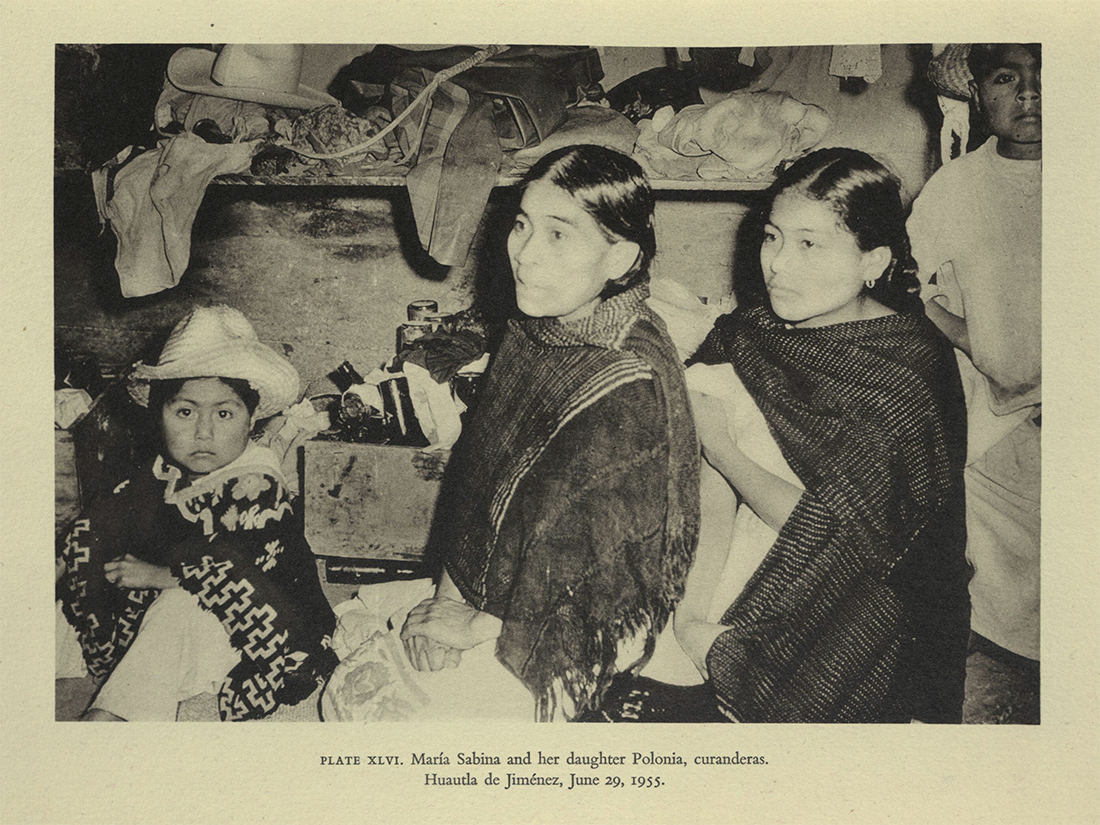 It was never Wasson’s intent that anyone should follow him to the home of María Sabina in Huautla de Jiménez. In fact, the Life article never directly mentioned a town, and María Sabina’s name had been changed to Eva Mendez, in an effort to protect her privacy. However, this was only a halfhearted attempt, as the second volume of Mushrooms, Russia and History actually revealed her identity and location, an action which has been described as violating her consent and abusing her hospitality. Soon a horde of “narco-tourists,” would-be visionaries, and curiosity seekers would descend upon the small village. From the early 1960s, María Sabina was subsequently inundated with visits from the emerging counter culture, with rock stars such as John Lennon, Bob Dylan, Keith Richards, and Pete Townshend rumored to have sought her out.

Later in life, María Sabina would lament the role she played in introducing the sacred mushroom to the modern Western world, stating “When we Mazatecs speak of the veladas we do so in a low voice, and, so as not to pronounce the mushroom’s name in Mazatec, we call them ‘little things’ and ‘little children’… From the moment when the strangers arrived the holy children lost their purity. They lost their strength…” Wasson was riddled with guilt when he realized how María Sabina had felt and how disturbed the Mazatec rituals had become. But he would later defend himself by saying, “What else could we have done? Had we refrained from presenting to the world the facts as we knew then, a novel and major chapter in Early Man’s cultural history would perhaps have vanished forever.” It was, he felt, an accident that he had arrived in Mexico during the same decade as the highways, airports, and telephones. 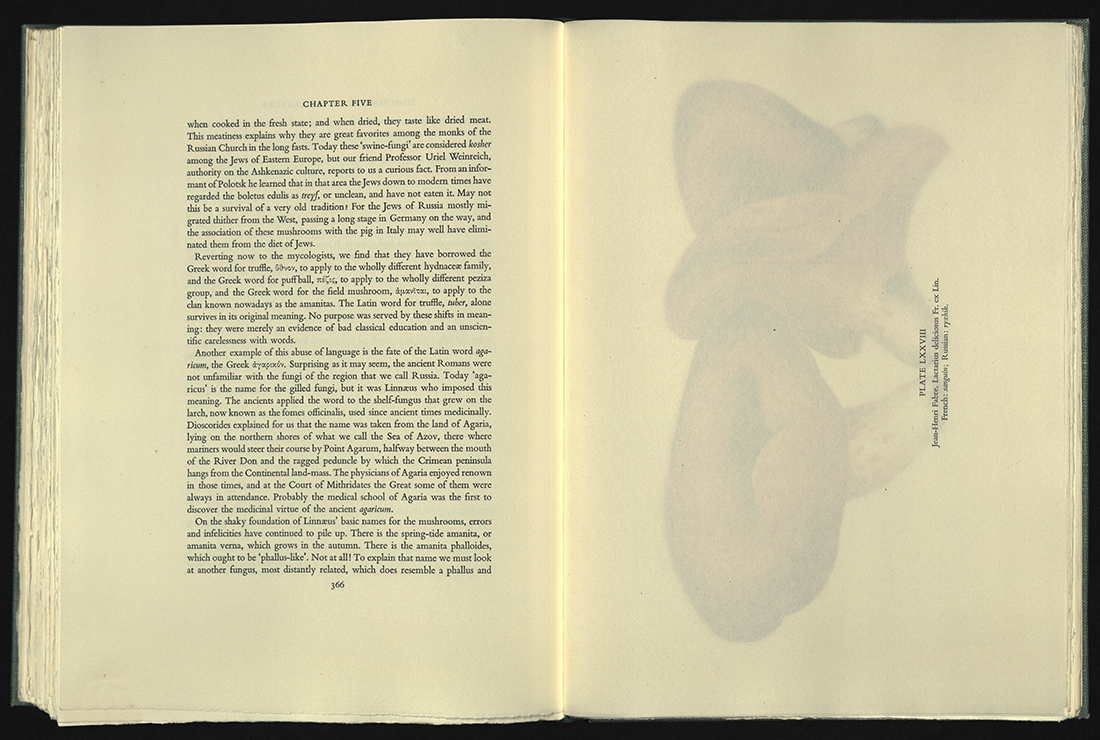 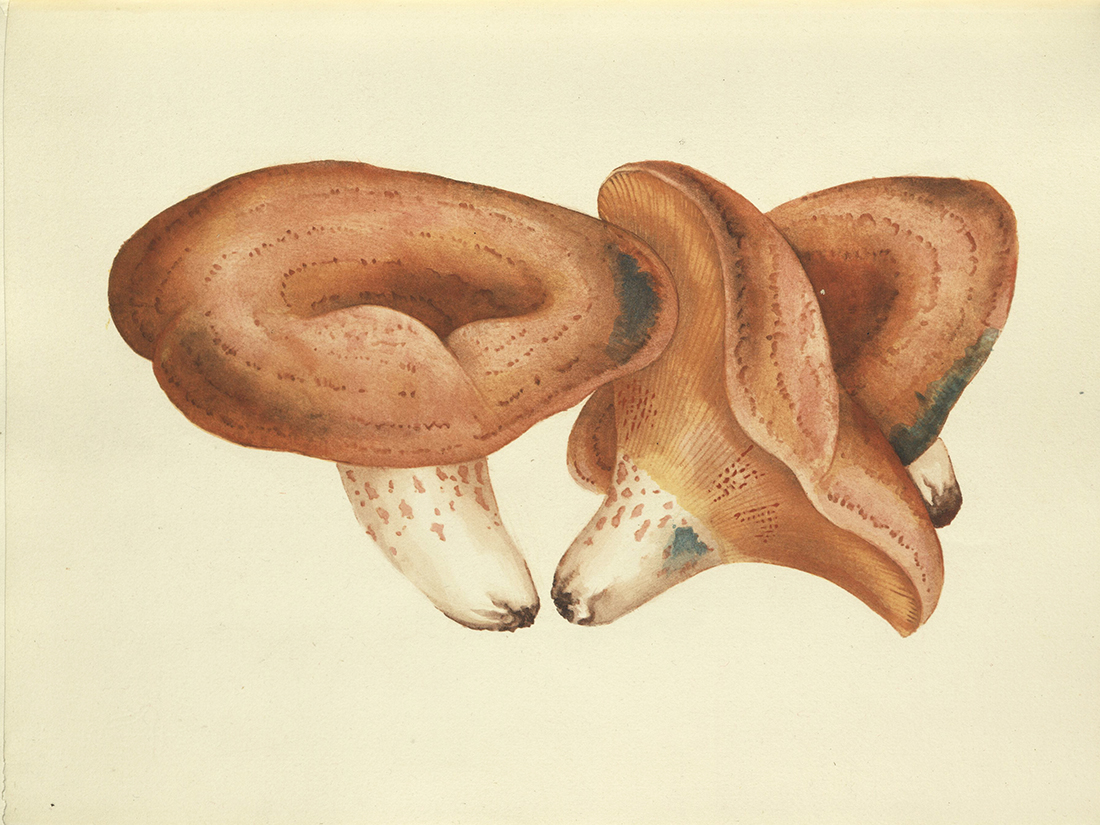 Valentina Wasson died of Cancer in 1958, just one year after the publication of Mushrooms, Russia and History.  Gordon Wasson would soon retire from banking and spend the rest of his life continuing research on their joint passion: mushrooms. He postulated that there had been a global, prehistoric mushroom cult — though the idea didn’t take hold among many historians and anthropologists. Regardless of what others thought of him, Wasson traveled the world in search of evidence of the “divine mushroom.” The god-like Soma of the Vedic texts? It was actually fungal in nature, and perhaps the last thing the Buddha consumed before his ascension to Nirvana. The Eleusinian Mysteries of ancient Greece? Wasson pointed to an ergot, another mushroom with long associations in human history, as the fuel for these sacred rites. During the course of his life he would go on to publish several other books, among them Les champignons hallucinogènes du Mexique (1959) with Roger Heim, Soma: Divine Mushroom of Immortality (1968), María Sabina and her Mazatec mushroom velada (1974), and The Wondrous Mushroom: Mycolatry in Mesoamerica (1980)  — all of which are held in the Marriott Library’s rare books collection and can be accessed by request in the Special Collections reading and reference room.