16 May Book of the Week — New Observations Concerning the Unicorn 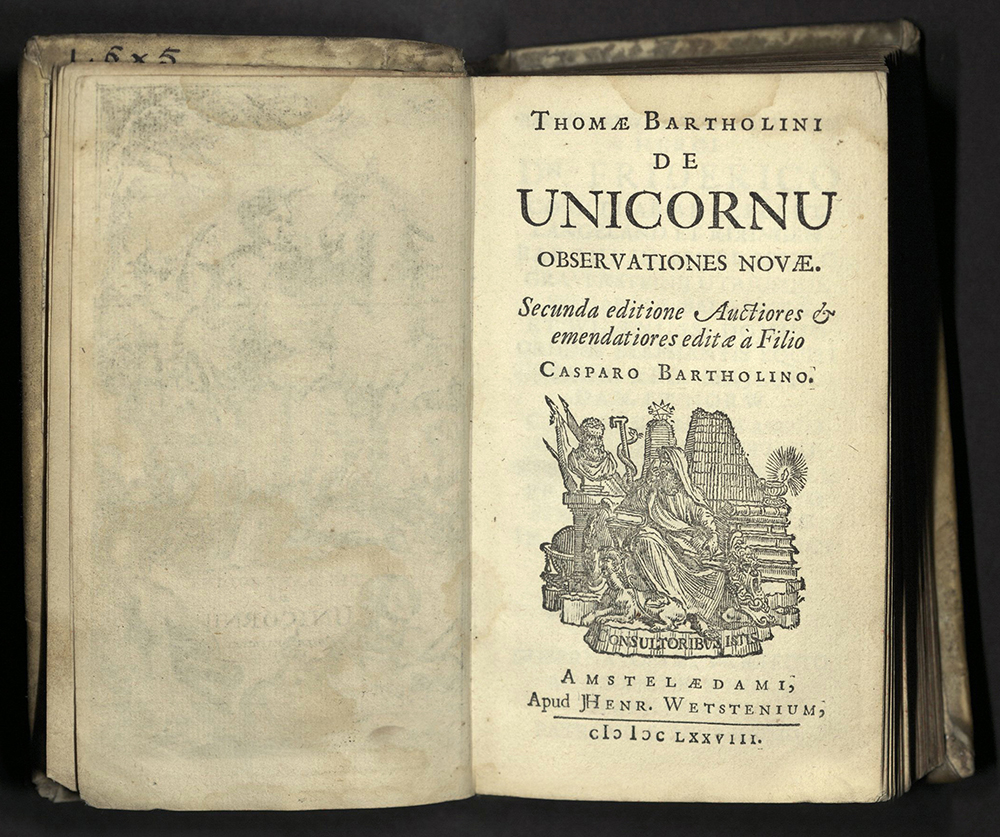 For thousands of years, in literature as well as in art, the unicorn has been depicted as a white horse-like animal with a long straight horn made up of spiraling grooves protruding from its head. During the Middle Ages and Renaissance, it was often described as a wild woodland creature which could only be captured by a virgin — both symbols of purity and grace. Meanwhile, in encyclopedias, the horn of a unicorn was described as having the power to heal sickness, and sometimes used as an antidote against poisoning. In the early modern period, the unicorn’s existence had essentially been guaranteed, not only by Scripture and the ancient authorities of the natural world, but also by the most contemporary travel reports. Today, the unicorn continues to hold a special place in popular culture. 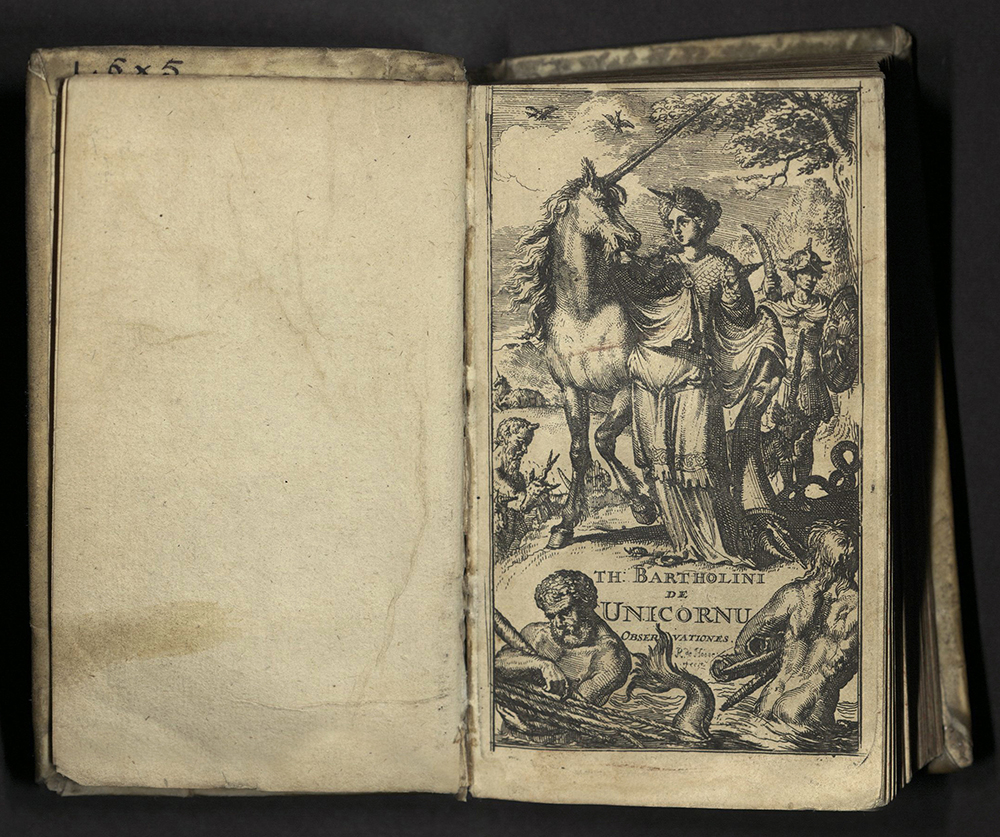 Written accounts of unicorns were not found in myths, as one might assume, but rather in accounts of natural history. The earliest depictions of a unicorn come from the Greek physician Ctesias and his book Indika, wherein he describes them as wild asses, fleet of foot, having a horn a cubit and a half in length, and colored white, red and black. In addition to Ctesias, other Greek writers such as Strabo, Pliny the Younger, Aelian, and Cosmas Indicopleustes made mention of unicorns in their texts. Thus by the Middle Ages, knowledge of the mysterious beasts was widespread. Medieval lore, however, added a layer of allegory to its depictions of the unicorn with the story of a young maiden — the only one able to tame the wild animal. As soon as the unicorn sees her, it lays its head on her lap and falls asleep. This allegory was thought to represent the relationship between the Virgin Mary and Christ. 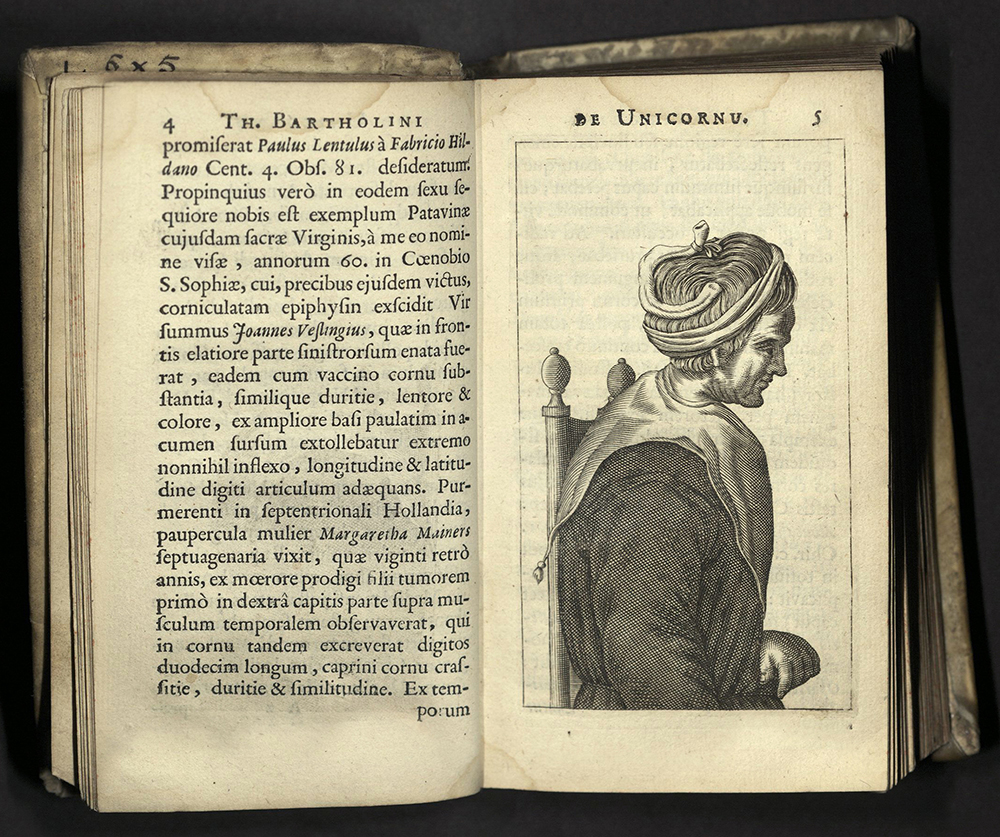 The Bartholin family of Copenhagen — a dynasty of Scandinavian scholars — is often credited for demystifying the unicorn. Already in the sixteenth century, doctors in Italy were questioning the use of the “unicorn horn” for its medicinal effects, but their argument received little attention within the universities. Advancements in the field of zoology and changes to the whaling industry slowly began to unmask the magic of the horn. With William Baffin’s first published description of the arctic narwhal, further public dissections of bowhead and sperm whales followed. 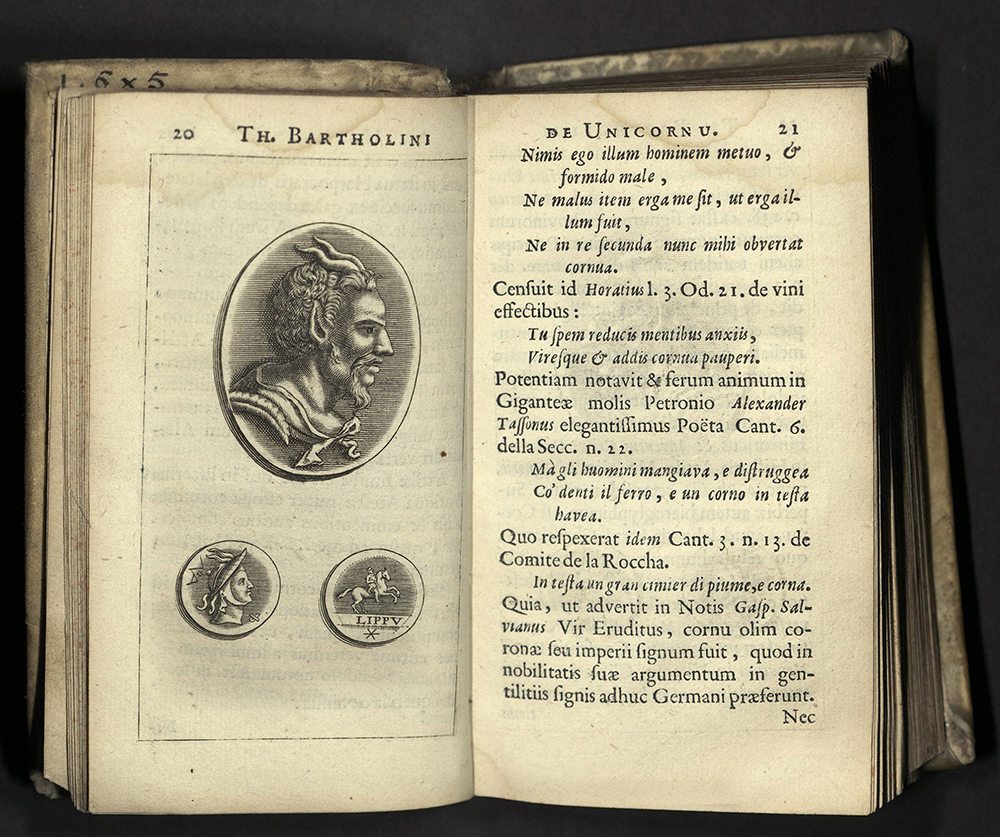 Caspar Bartholin the Elder — a Danish physician, scientist, theologian, and father of Thomas Bartholin — was the first to systematically study unicorn horns, which he found in the cabinets of curiosities, cathedrals, and apothecary shops of Europe. His experiments forced him to conclude that these were not the horns of a hoofed animal. However, his research stopped short of identifying where, exactly, the horns had originated. Shortly after Caspar the Elder died in 1629, his brother-in-law, the Danish physician Ole Worm, took up the research on unicorns. By 1638, evidence comparing skeletons, which Worm had acquired in Iceland, led him to the realization that the unicorn horns touted throughout Europe were and had always been the tusks of the popular marine mammal, the narwhal. Such beliefs were examined wittily and at length in 1646 by Sir Thomas Browne in his Pseudodoxia Epidemica. Still, false “unicorn horn powder” was sold in Europe for medicinal purposes as late as 1741. 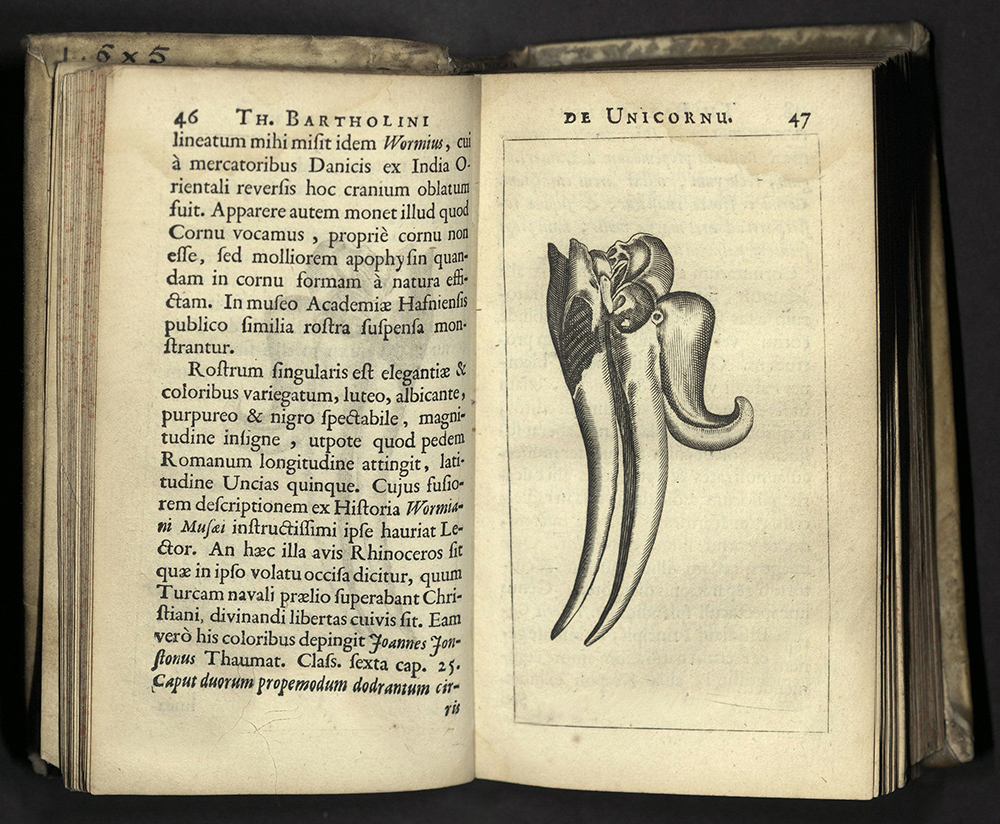 Thomas Bartholin built upon the work of both his father and uncle. While it had been determined that the unicorn did not actually exist, Bartholin was still interested in the horns’ curative properties. Bartholin also analyzed specimens of horns found in Europe, tested them alongside those of narwhal tusks, and considered other one-horned animals such as the rhinoceros, the rhinoceros beetle, and the hawk moth caterpillar.

Did all unicorn artifacts circulating in Europe really come from Scandinavian narwhals? Could their tusks perhaps nonetheless have the powers to neutralize poison that medical science had attributed to them until now? And what about the horse-like unicorns that had been observed repeatedly since ancient times, especially in Asia and Africa? 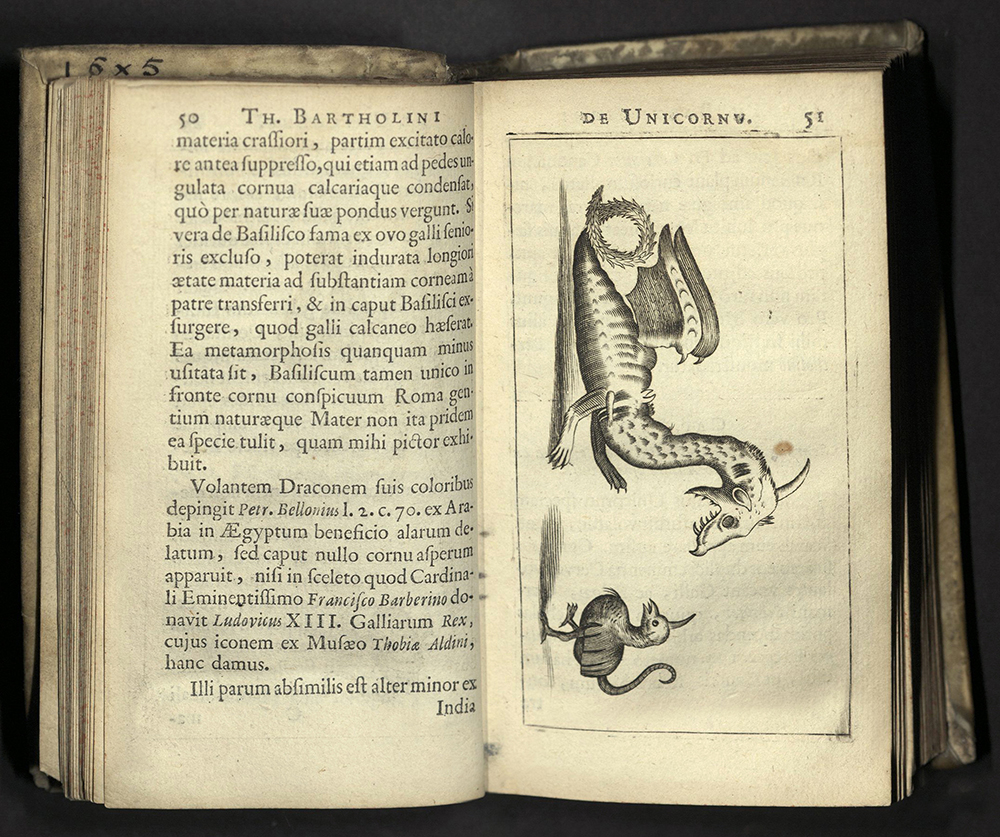 In 1645, Thomas Bartholin published Observationes novae de unicornu —  a survey of horns throughout the world. His work references various examples of horned animals (and humans) and concludes that, though the unicorn itself may not be real, the therapeutic properties of the horns had been ascribed correctly. He even believed that “unicorn rubs” had the ability to halt a fever epidemic occurring in Copenhagen. This second edition of Observationes was published in 1678 and edited by Bartholin’s son, Caspar Bartholin the Younger. The expanded edition includes twenty full-page and three smaller engraved illustrations throughout the text, in addition to a foldout plate and illustrated title page engraved by Reomeyn de Hooghe. Some of the most prominent illustrations featured are that of Margherita Maeners (a Dutch woman with a long cutaneous horn), four views of a narwhal skull and tusk, the great horn of Gallehus from the Kunstkammer of Christian V, horned snakes, Dürer’s rhino, and the “basilisk.” 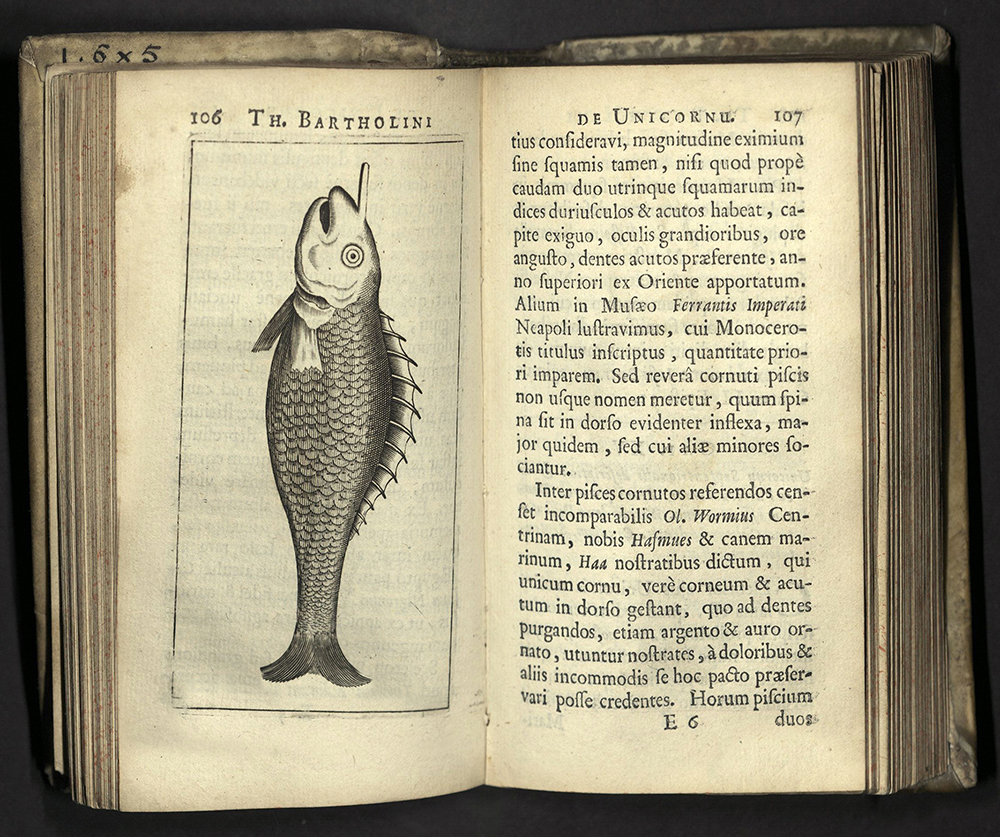 This curious synthesis presented by Thomas Bartholin continued to have great success throughout the seventeenth century. Eventually, however, science would rebuke the claims made in Observationes. Medical scholars such as Anton Deusing and Cornelis Stalpart van der Wiel were able to disprove Bartholin’s original results and the unicorn thus disappeared from the apothecaries of Europe by the early eighteenth century. Even the narwhal, Unicornu groenlandicus, dropped “unicorn” from its scientific name, following the formalization of binomial nomenclature by Carl Linneaus. 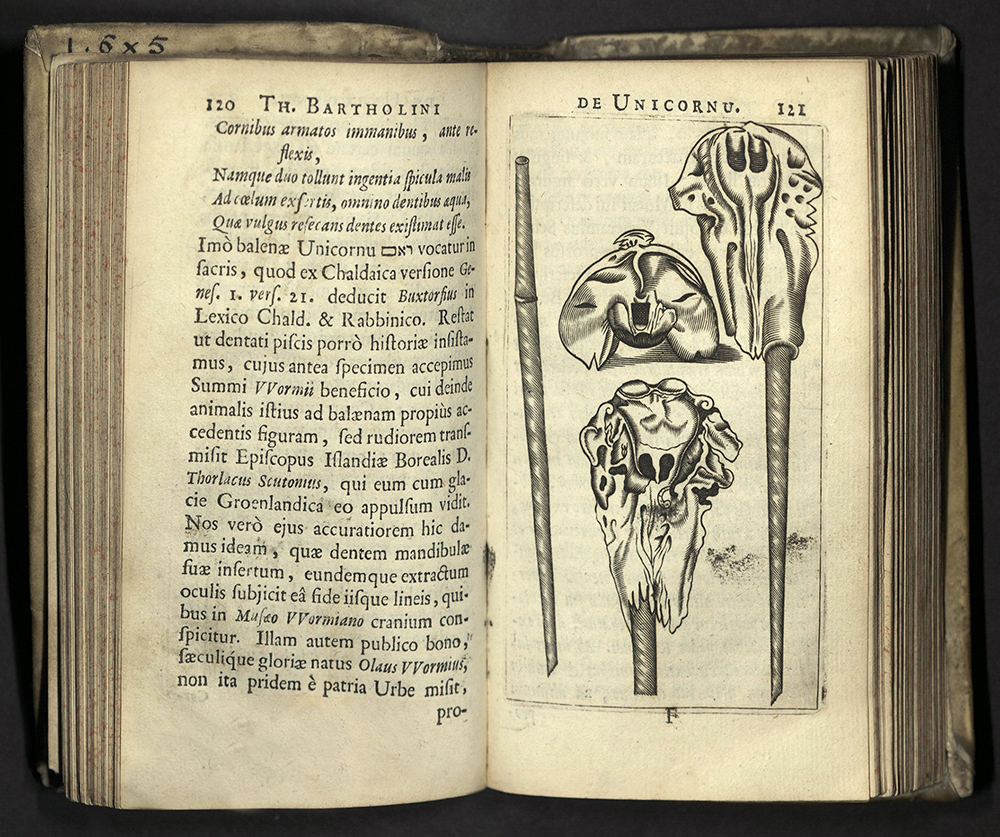 Although the Bartholin’s investigations of the unicorn are certainly amusing, the family is perhaps better known for their more prestigious and pioneering scientific work. Three generations of the Bartholin family made significant contributions to anatomical science and medicine in the seventeenth and eighteenth centuries: Caspar Bartholin the Elder (1585–1629) for being the first to describe the workings of the olfactory nerve; Thomas Bartholin (1616-1680) for his work in the discovery of the lymphatic system in humans and for his advancements of the theory of refrigeration anesthesia, being the first to describe it scientifically; his brother Rasmus Bartholin (1625–1698) for his discovery of the double refraction of a light ray by Iceland spar (calcite); and his son Caspar Bartholin the Younger (1655–1738) who first described the “Bartholin’s gland.”