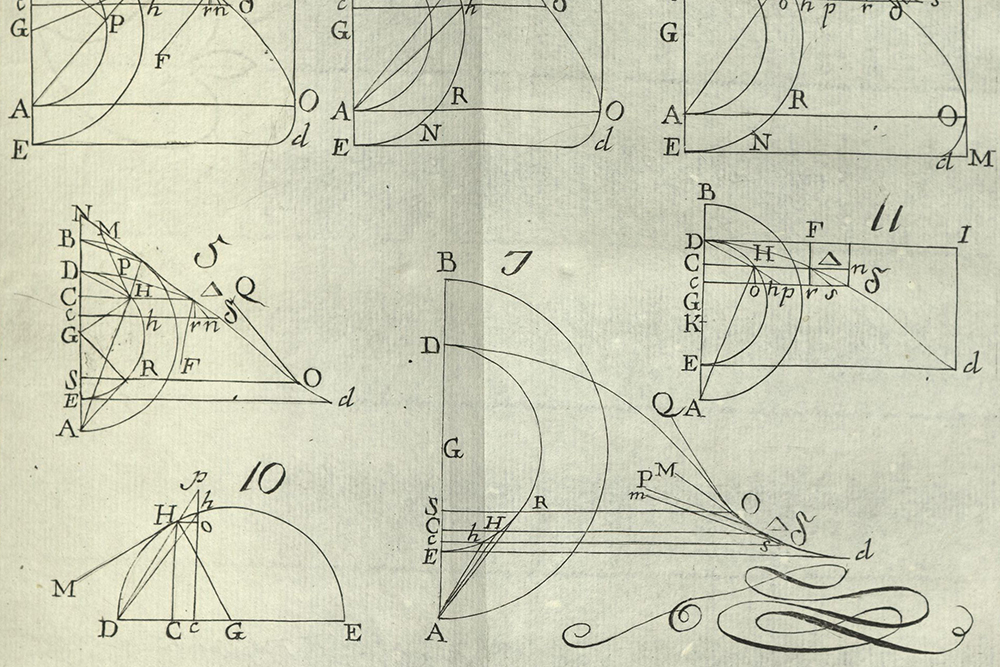 14 May Book of the Week — Opuscula mathematica “…the function of our Art is to put before our eyes…representation of anything which the human mind can split up and divide into a definite number of different parts, not infinitesimally small, which frequently recur in exactly the same form to play a part in that representation.” — Giambattista Bodoni, Manuale tipographica (1818)

This scarce mathematical work on hydraulics and geometry was printed by Giambattista Bodoni. Bodoni was born in Saluzzo, Piedmont, Italy in 1740. He died in Parma, Italy in 1813. An engraver, type designer, printer and publisher, Bodoni was invited by the Duke of Parma to set up and run a printshop. In 1779, Bodoni opened his own type foundry. In 1782 Charles II of Spain named Bodoni his court typographer. Bodoni is still recognized for his roman, Greek, Gothic, Asian and Russian fonts, and lines, borders, symbols, numbers and musical notation. He was the most prolific punchcutter in the history of printing: an inventory of his shop, compiled by his widow, revealed 25,491 punches and 50,283 matrices, each cut by hand. He was friend to kings, ministers and others in power, dubbed by them as “Re dei tipografi, tipografo dei re” (king of typographers, typographer of kings). He basked in popularity, receiving numerous high honors.

This plain edition, with simple yet gracious chapter-heading ornamental devices, is a great example of the beginnings of Bodoni’s signature style: wide margins; clear, solid type; and exquisitely designed and printed mathematical figures all point to Bodoni’s typographical genius.

Oh, yeah. And then there’s the math. Pietro Giannini was a student of Vincenzo Riccati (1707-1775) who urged Giannini to publish Opuscula Mathematica (1773). Opuscula is divided into three parts. In the first part, Giannini studied water falling through a hole. Isaac Newton had addressed this in his Principia, but Giannini’s work is less experimental, more mathematical. Giannini was appointed a professor of mathematics in Seville, Spain. This edition contains ten engraved folding copper-engraved plates, each with multiple diagrams. It is illustrated with a woodcut device on title-page. Our copy is bound in original wrappers with an old manuscript spine label.