20 Sep Book of the Week — Pantographia 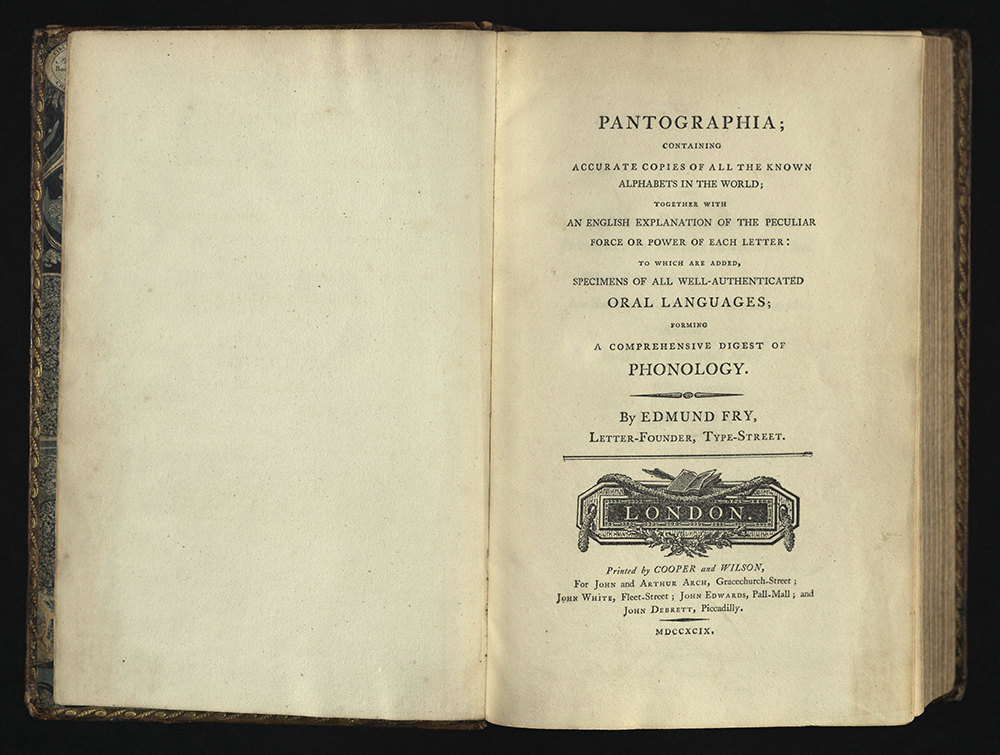 “The noblest acquisition of mankind is speech; and the most useful art is that of rendering it visible:
that distinguishes Man from the brute creation…” 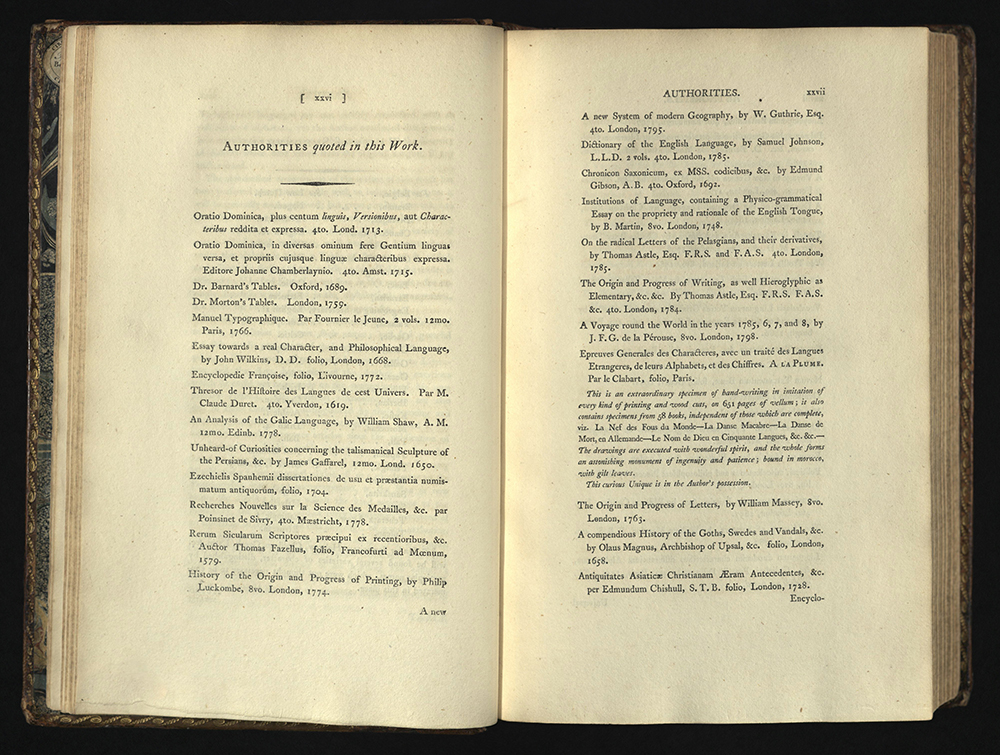 In 1799, Edmund Fry published the first and only issue of Pantographia — a collection of all the world’s known alphabets. It contained 405 alphabet specimens from 208 original alphabets in 164 different languages. Or, more generally, thousands of pieces of custom type that Fry spent over a decade cutting with his own hands. Most of those types were never used again. 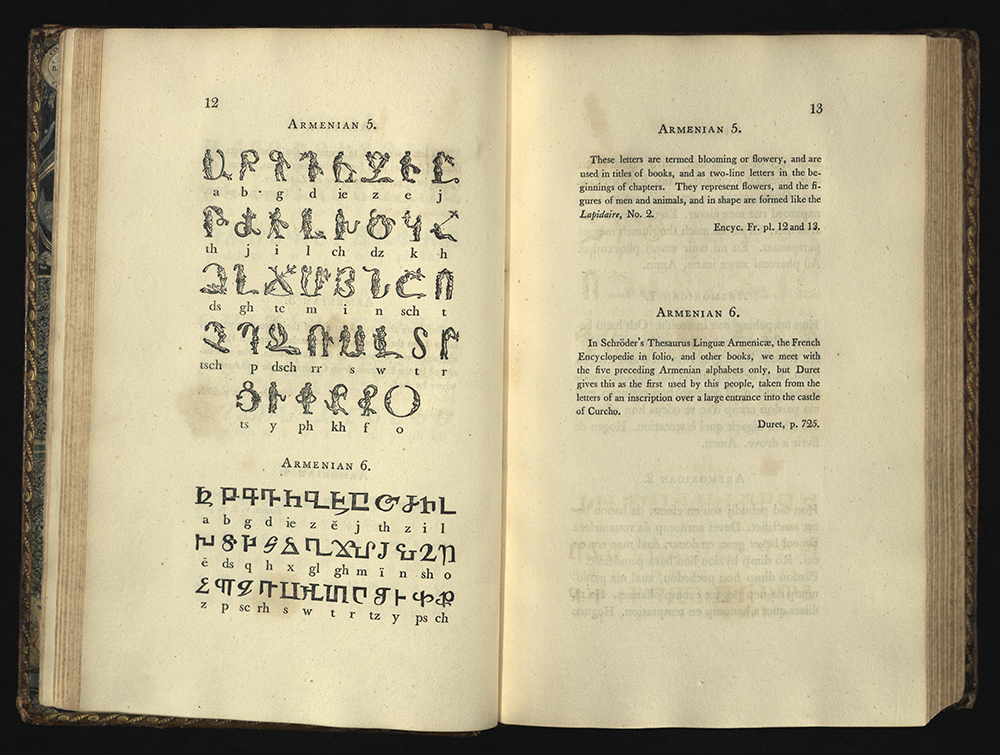 Because of its uniqueness, Pantographia was highly sought after. Fry sold hundreds of copies at the price of two pounds and two shillings (or as much as seventy pairs of shoes, or sixty pounds of beef).  But what, exactly, is this book? Some might call in an encyclopedia of languages, a dictionary perhaps, or a comparative study of ethnography. What, exactly, is Pantographia for? 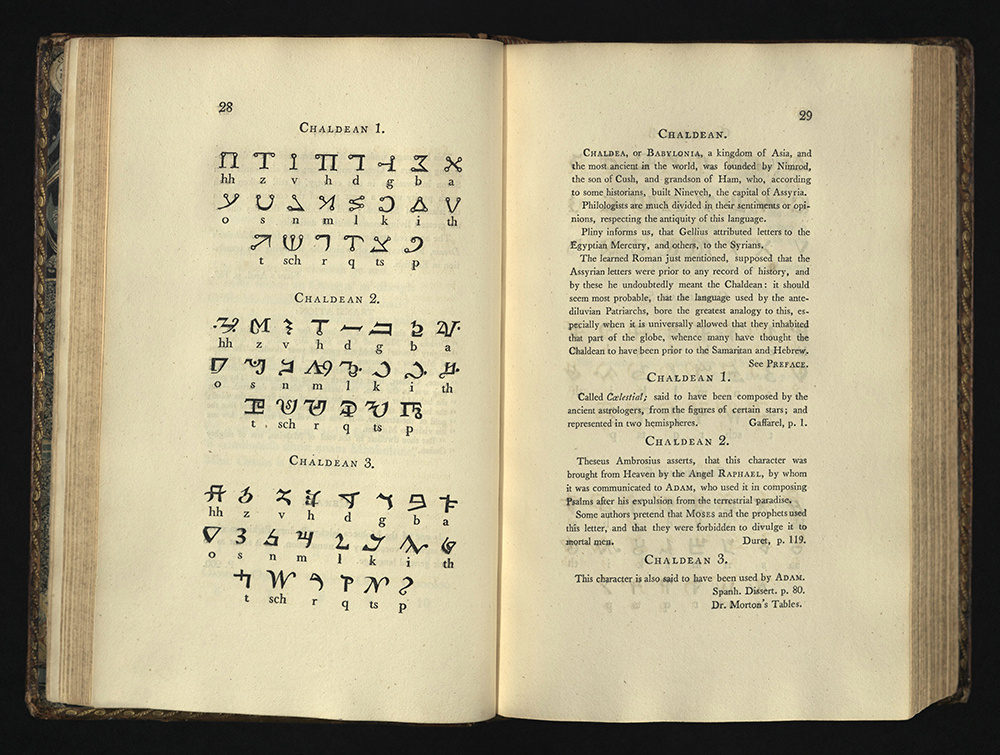 Edmund Fry was the son of type-founder Joseph Fry. In 1766, his father established the third type foundry in London. During this time, the dominant type used by all the printers in the English-speaking world was a design — or imitation thereof — developed by typefounder William Caslon, sometime between the 1720s and 1730s. As a result, nearly all eighteenth-century printing in England was set in Caslon type or a Caslon clone. But the elder Fry rebelled and took inspiration, instead, from a Birmingham typefounder named John Baskerville. Using the Baskerville type, Fry exaggerated the design and manufactured a thinner and lighter version of the original. 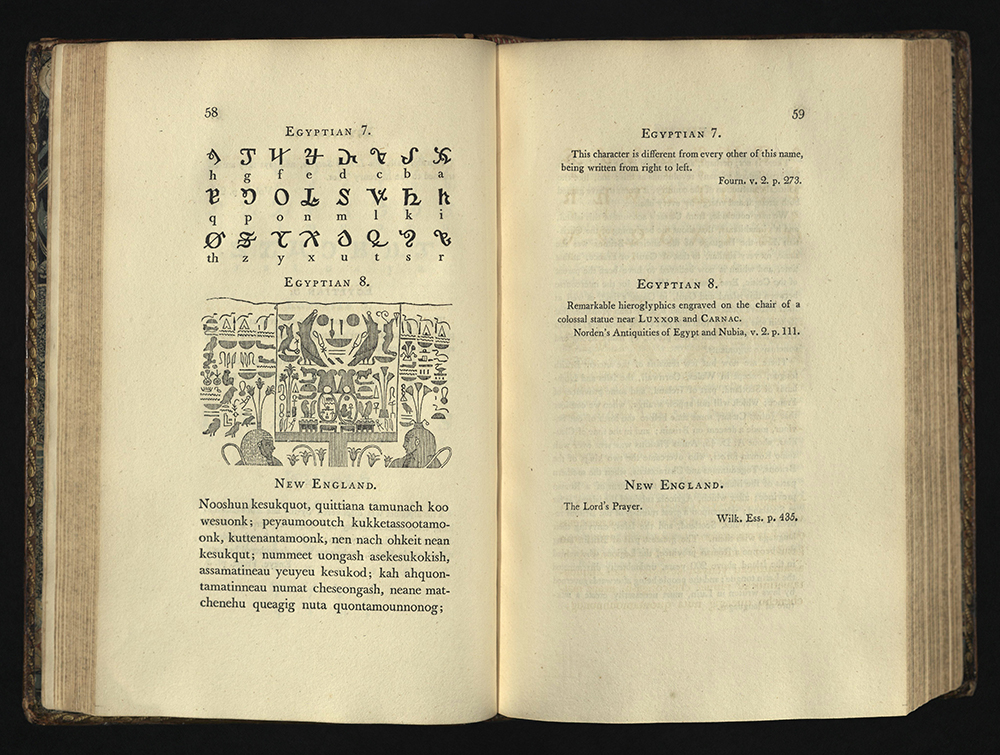 This is all to say that, when Edmund Fry became a partner in his father’s foundry at the age of twenty-five, he was already well-versed in the trade of cutting type. Unlike his father, whose professional background was in medicine, the younger Fry specialized in punch-cutting — an incredibly tedious task. The first step of punch-cutting is to stamp, cut, and shave the end of a piece of steel into the shape of each letter that needs to be cast. This steel “punch” is hardened and then pressed into a bar of soft copper, making an impression or “matrix” into which the molten type metal is poured. 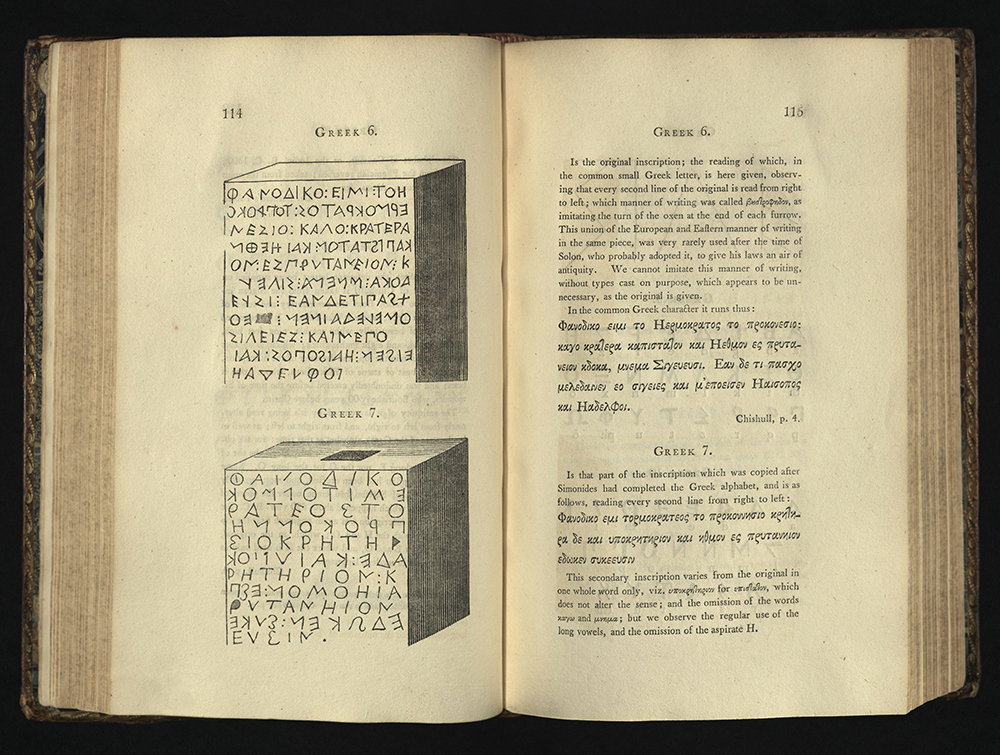 When Joseph Fry retired in 1787, the type foundry firm changed its name to Edmund Fry & Co. That same year, the company issued their first “Specimen of Printing Types,” while Fry began accumulating the linguistic materials that would be used later to create Pantographia. Fry collected a  library of polyglot bibles, dictionaries, encyclopedias, travelogues, history books, among other “unheard of curiosities.” These authorities, as Fry calls them, can all be found following the preface of the book, which includes notable authors and titles such as John Wilkins’ Essay towards a real character (1668), Samuel Johnson’s Dictionary of the English Language (1785), and the Encyclopaedia Britannica (1797). 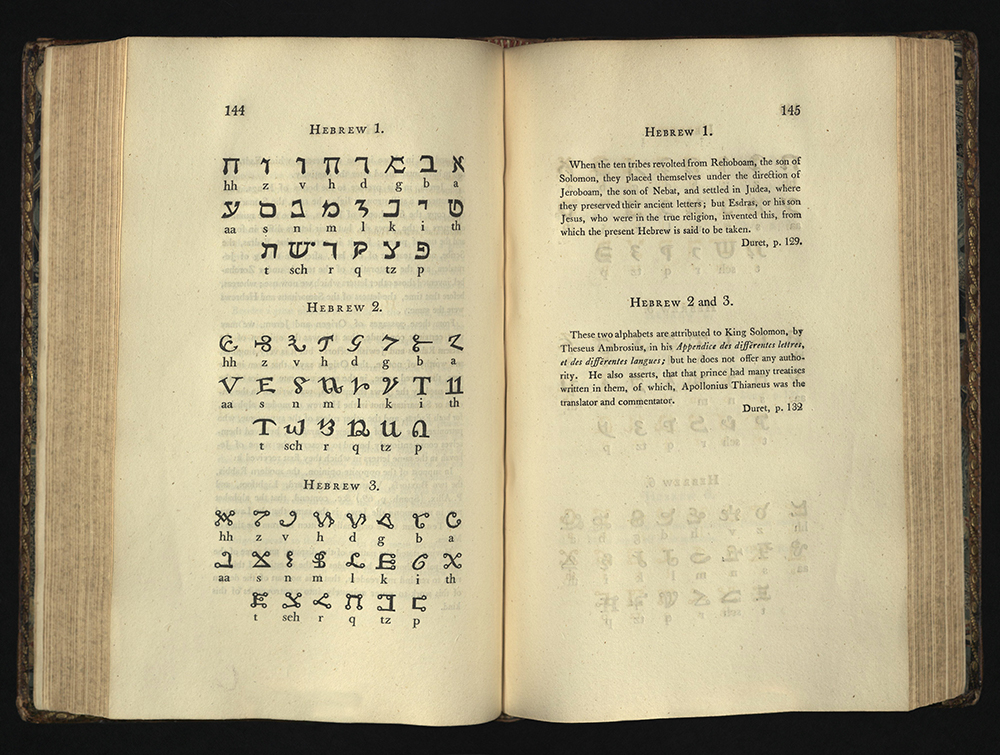 Compiling all of the research for this work on writing systems and typography took Fry more than a decade to complete. Yet, it could be argued that Pantographia’s most impressive accomplishments are the technical skills required to make all that type — some four thousand individual punches and upwards of ten thousand hours of skill labor. Only half of the book’s specimens use the common Latin alphabet, or some other alphabet which had already been manufactured in Western Europe. The other half of Pantographia had to be custom made. That’s two hundred unique typographic alphabets that were created specifically for Fry’s work, and never to be used again. 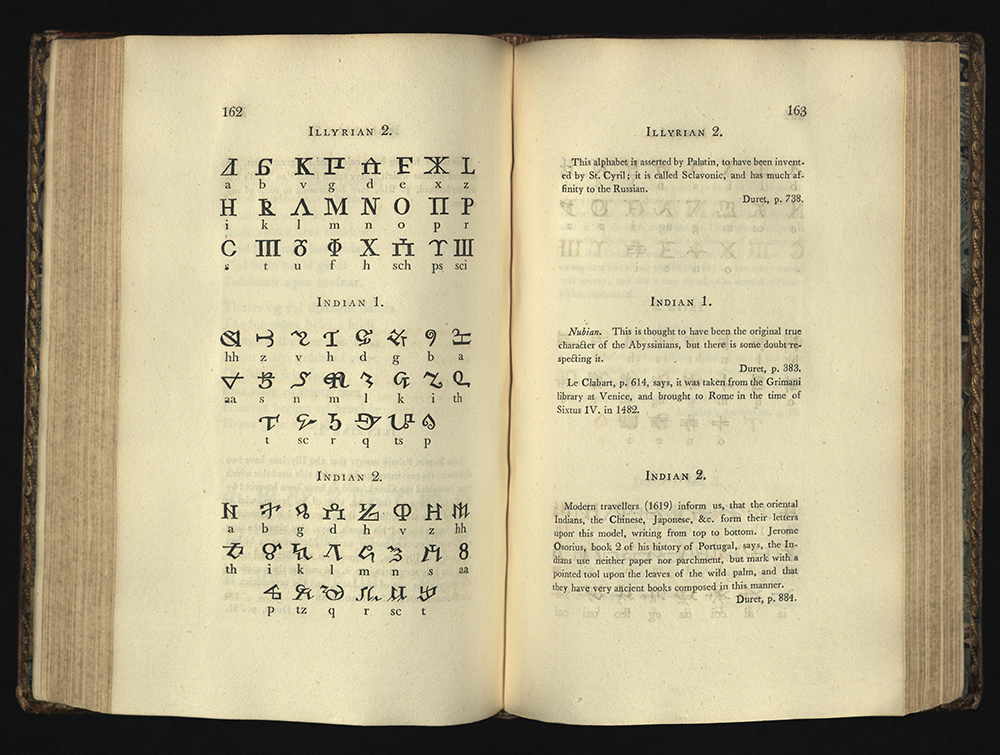 How does a reader read the unfamiliar alphabets, such as the twenty different varieties of Chaldean — a script that has no textual sources except for having been transmitted by copies and exemplars? Should Pantographia, then, be described as a sort of type-specimen book, wherein one reads language as a visual object rather than a semantic one? When reading a type specimen, the words disappear so that we may become aware of the letter forms. In contrast, reading a story requires the letters to vanish, so that we are only conscious of the words and their meanings. Thinking in this way, Pantographia is a combination of image and text. 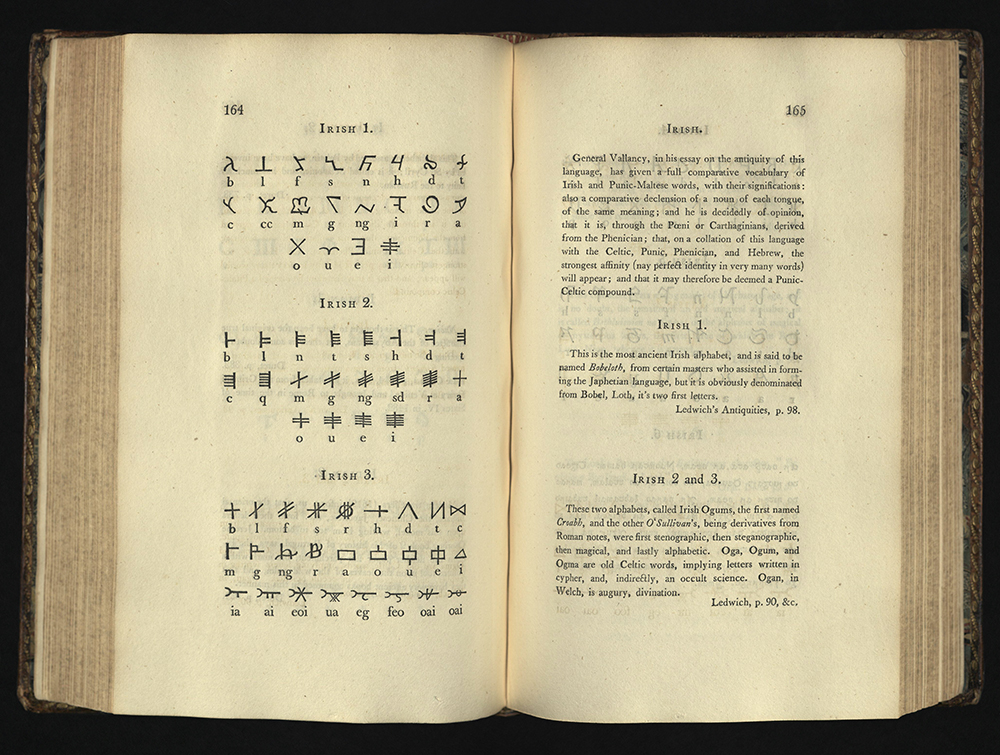 The comparison between familiar and unfamiliar alphabets emphasizes the exotic nature of foreign worlds and distinguishes an otherness to those languages and cultures. In many ways, Pantographia visually expresses the theory of linguistic relativity, later known as the Sapir-Whorf hypothesis, which was a commonly-held belief in the eighteenth century. The theory suggests that the structure of any given language affects its speakers’ worldview. In Pantographia, this belief was also applied to the written language. Descriptions of some of the specimens reinforce stereotypes around ethnic groups considered to be uncivilized, barbaric, and savage. While others promote a prideful linguistic identity. 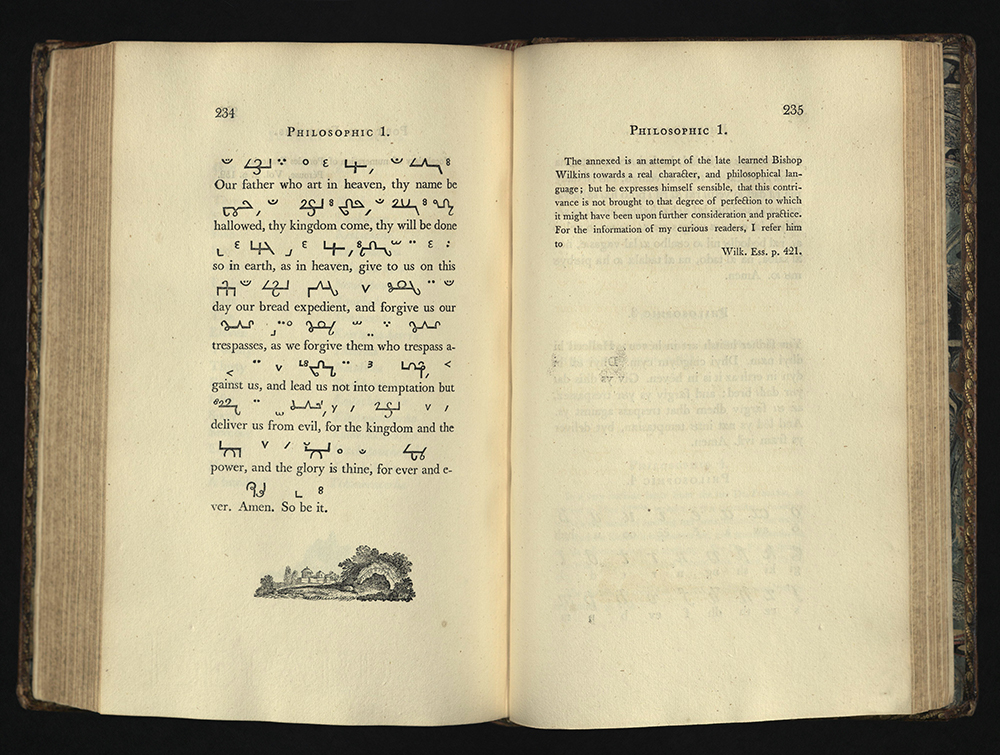 The Rare Books copy of Pantographia was previously owned by John Moore Paget of Cranmore Hall, now part of All Hallows Preparatory School. Cranmore Tower — located in Cranmore, Somerset, England — was built in his honor between 1862-1864 by Thomas Henry Wyatt. Extant copies of Edmund Fry’s Pantographia are said to be exceedingly rare. 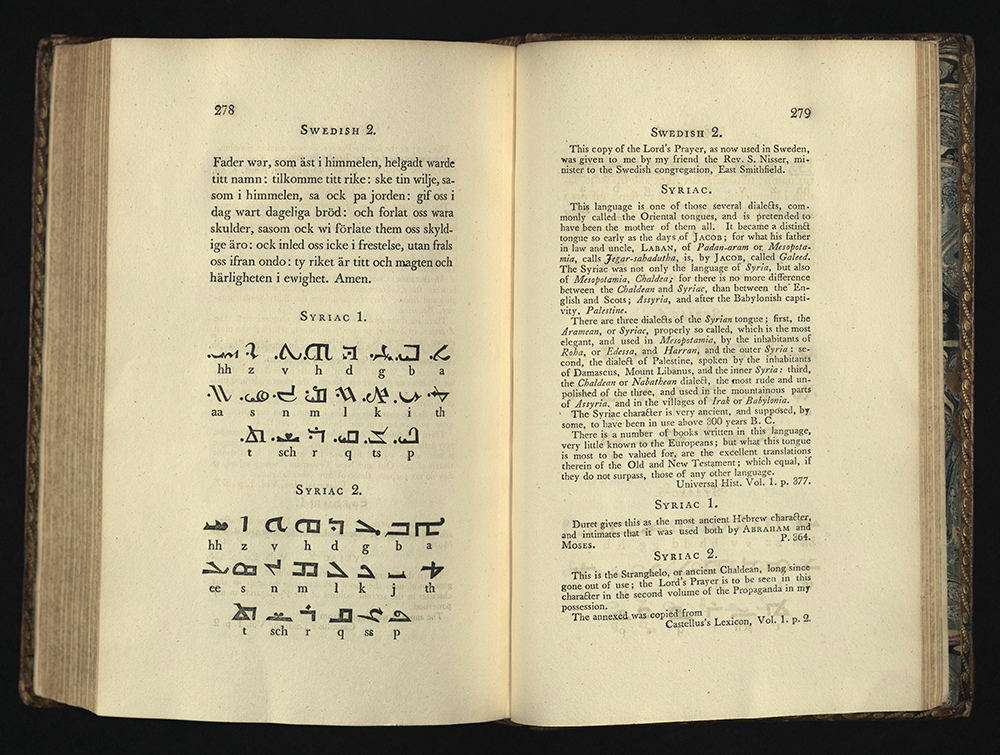 Learn more about Pantographia and Professor Johanna Drucker’s “forty years of obsession with this book” in the first CalRBS Online Lecture:

Edmund Fry’s 1799 Pantographia as a typo-bibliographical resource for alphabet historiography.