21 Jun Book of the Week — Philosophical and Miscellaneous Papers

“Yet he who praises Dr. Franklin for mere ability, praises him for that quality of his mind, which stands lowest in his own esteem. Reader, whoever you are, and how much soever you think you hate him, know that this great man loves you enough to wish to do you good: his country’s friend, but more of human kind.” 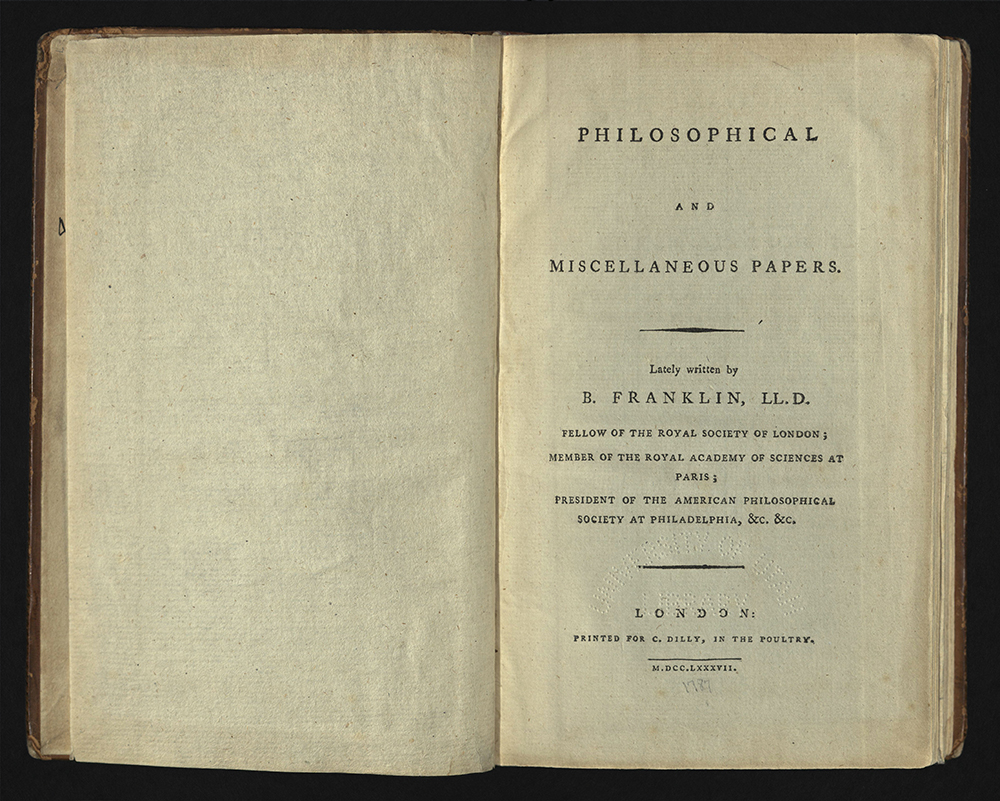 Shortly after American independence had been declared, Benjamin Vaughan began collecting Benjamin Franklin’s published political writings. In addition to being a merchant and medical doctor, Vaughan’s broader long-term interest was in politics and science. By December 1776, the volume was nearly finished. However, it would take another three years before the publication would be put to print. Political, Miscellaneous, and Philosophical Pieces is the only edition of Franklin’s non-scientific writings printed during his lifetime, done so with Franklin’s consent, and includes errata made for it by him. Published in London while Franklin was serving as America’s ambassador, the seminal collection contains many of his writings on the rebellious American colonies and incendiary British measures such as the Stamp Act. 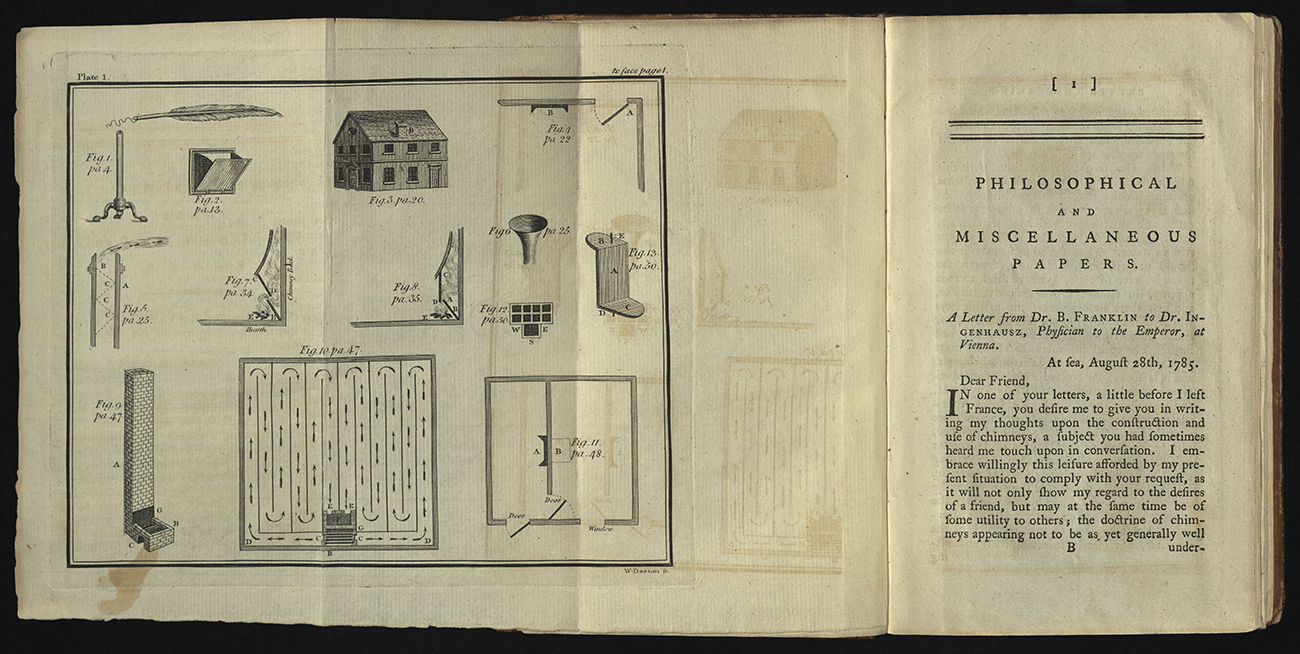 In 1787, another collection of Franklin’s writings would appear in print, but this one would be his last. Philosophical and Miscellaneous Papers was edited by Edward Bancroft, a confidant of Franklin and also a notorious English spy. Bancroft had contacted Franklin in 1786 to report that a London-based publisher, Charles Dilly, was interested in a new edition of Franklin’s works, to which he cordially responded. He also asked Franklin to send him a biographical introduction, but the aging and easily exhausted Franklin never sent the information. Nevertheless, Philosophical and Miscellaneous Papers was published the following year, intended to be a companion volume to Experiments and Observations on Electricity (1769) and Vaughan’s Political, Miscellaneous and Philosophical Pieces (1779). 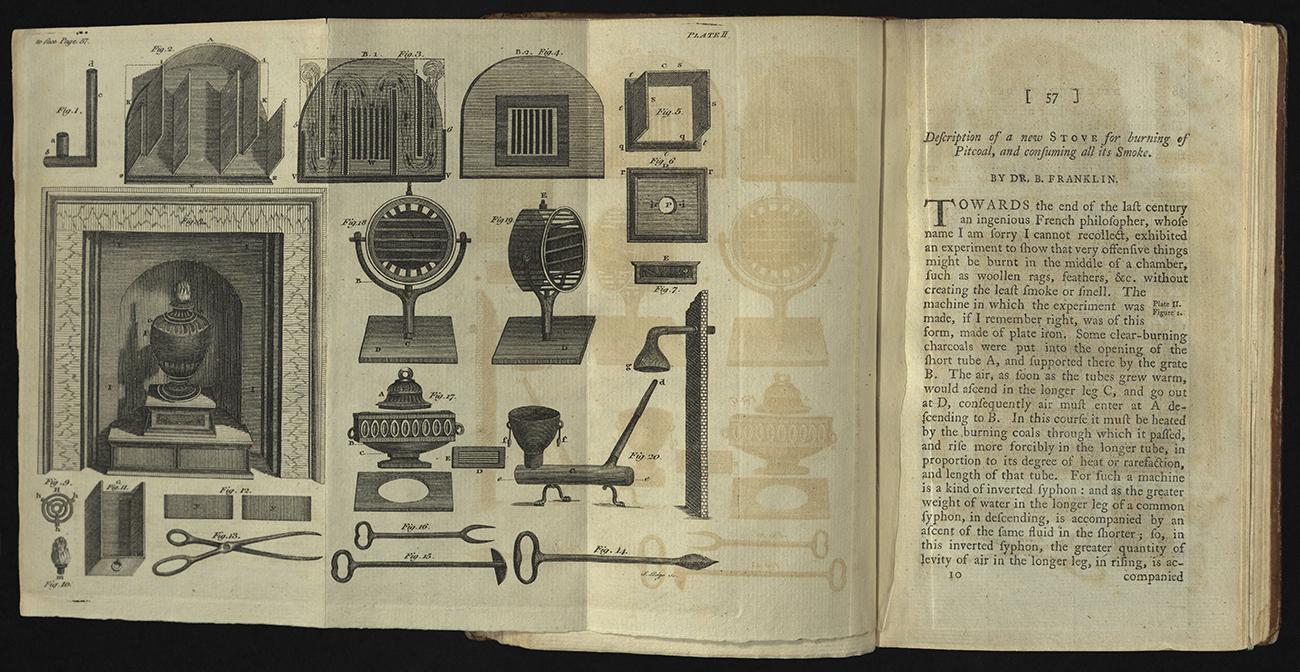 Among the important political essays in this collection are “Remarks concerning the Savages in North America” (1784), “Letter from Dr. B. Franklin to Benjamin Vaughan on Privateering” (1785), and “Information for those who would remove to America” (1784) — which is considered to be one of the clearest expressions of his belief that American society should be based on the virtues of the middle class. Another highly notable piece is “Internal State of America,” his sharply optimistic postwar reply to complaints of hard times featured in the American press, with an equally sharp consciousness of British propaganda. This volume also contains three major scientific writings: “Description of a New Stove for the burning of Pitcoal” (1785), “Letter from Dr. B. Franklin to Dr. Ingenhausz [On the Causes and Cure of Smoky Chimneys]” (1785), and “Letter from Dr. Benjamin Franklin… containing sundry Maritime Observations” (1785).

Franklin developed an interest in the oceans and seas at an early age. Growing up in the port city of Boston, he heard many tales about oceanic journeys – from spice trade to whaling, his proximity to seafaring relatives and neighbors provided young Franklin with valuable access to maritime knowledge. That interest continued throughout his entire life. His own maritime experiments started at the age of twenty, when he took his first transatlantic ship from America to England. During this voyage he observed a difference in water color. Little did he know, he was observing the passage through the Gulf Stream, an oceanic current he would spend the rest of his life studying. Merging his political and scientific interests, Franklin used Maritime’s study of the sea and Gulf Stream to “proclaim the virtues of his nation and its people.” 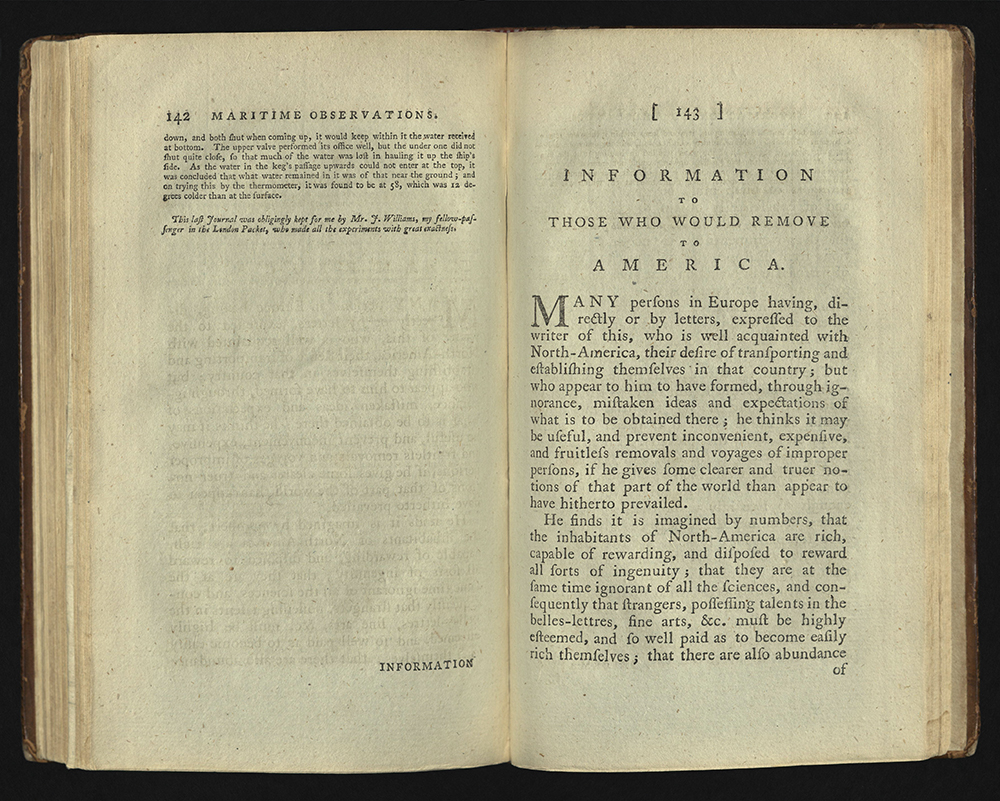 Philosophical and Miscellaneous Papers was edited by Edward Bancroft and published by Charles Dilly in 1787, just three years before Franklin’s death. The volume includes four copper-engraved folding plates with diagrams of the Franklin Stove, an early published map of the Gulf Stream, and observations and designs related to chimneys and sailing vessels.