“The art of printing, with its necessary tools — paper, ink, and type — has been of supreme importance in the advance of civilization.
It has preserved for future generations the culture, literature, and history of former times;
it has given opportunities in education for the common man far beyond comprehension.
Today’s civilization is inconceivable without the printed word.” 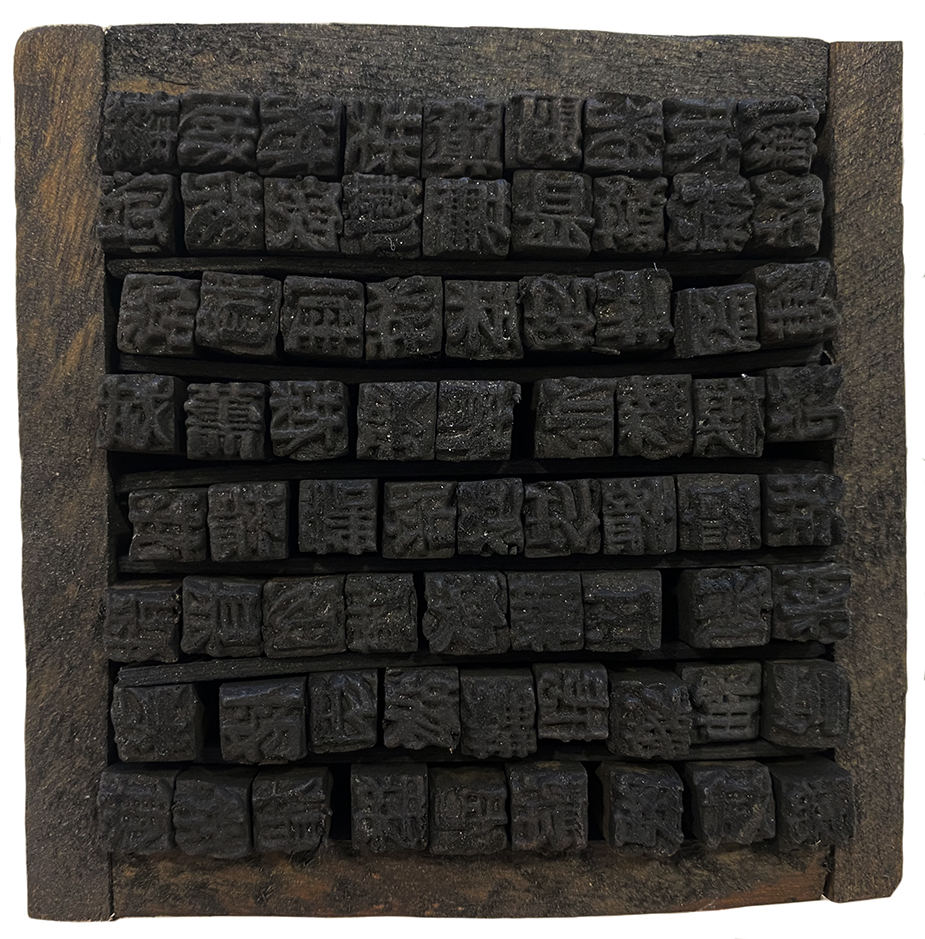 Printing – in the current sense of the word – evolved over many years as a combination of several time-saving methods of duplication. Most scholars credit China with the invention of printing, which likely began with a single block of wood, carved in relief. For this technique, called xylography, a text was written on a thin sheet of paper, which was carefully pasted face down against the surface of a wood board. Once dried, the reverse image was used as a pattern for the woodcarver, who would cut away the block until only the individual characters remained, to form a raised printing surface that could then be inked. With some trial and error, Chinese printers eventually determined that the characters should be carved out as individual pieces, able to be reused for different books serving different purposes. These individual characters carved from wood became the foundation of most basic form of printing with movable type. 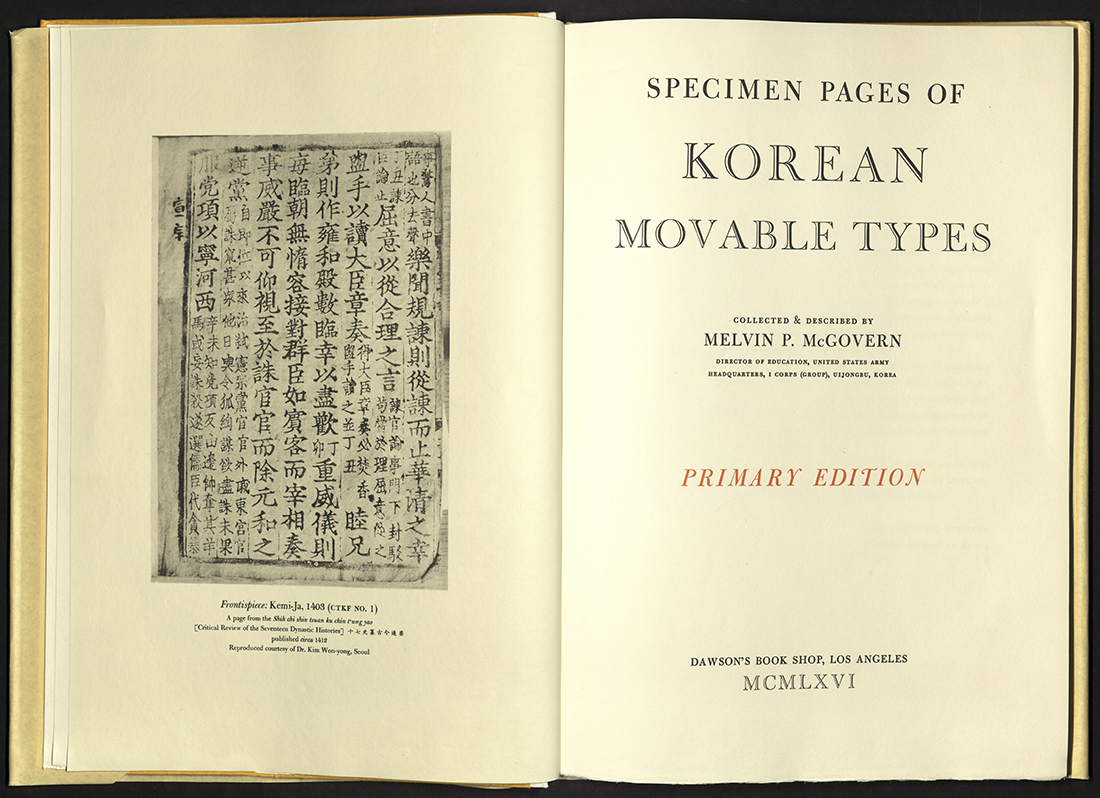 Although the idea of printing with movable type originated in China, Korean printers moved one step further and learned how to make and use type cast in metal —  before Johannes Gutenberg made a similar innovation in Europe. Metal type was more durable than its wooden counterpart and much easier to reproduce hundreds of individual characters. The Korean type-casting method begins with the cutting of the model character in relief on the end of a small block of wood, typically boxwood since it is hard and close-grained. This wooden die would be pressed repeatedly into a bed of sand, producing a series of impressions into which molten metal could be poured. When it cooled, the metal types were gathered up, smoothed around the edges, and sorted to await use. 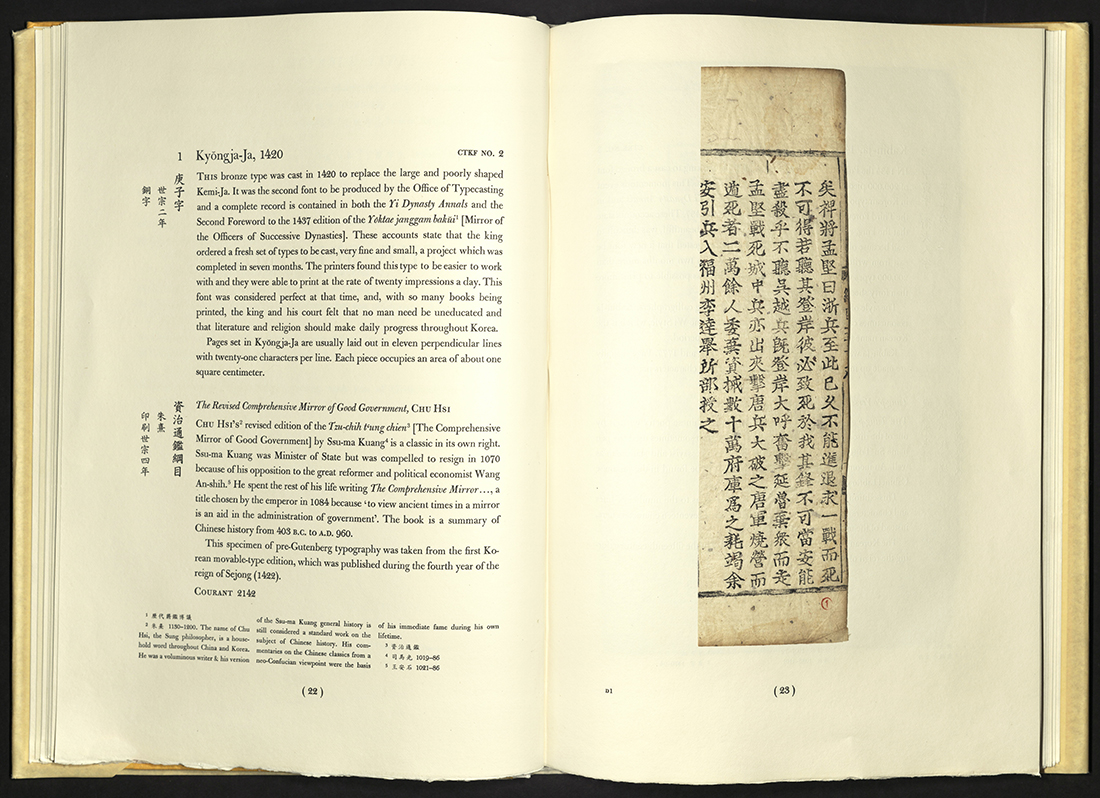 Printing with metal type required a heavier ink than that which was used for writing or printing from wooden blocks. Throughout East Asia, Korean writing inks were already highly regarded and rare — the manufacturing process was always kept secret. Production of the ink was entrusted to a special department of the Imperial court, and offerings of ink were made annually to the gods. The ink was made from charcoal produced by burning old pine-wood, mixed with a special glue extracted from deer horns, and included a light oil that helped it cling to the metal printing surface. It was true, deep black, and almost indestructible. Like the inks, the papers that were used by Korean printers were also modified to be more compliant with the metal type. A thinner, but tougher, sheet was required for accurate and efficient printing. Korean papermaking, like that of the Chinese and Japanese, depended principally upon the bark of the mulberry tree. For printing, however, silkworm cocoons were added and pulped with the bark. 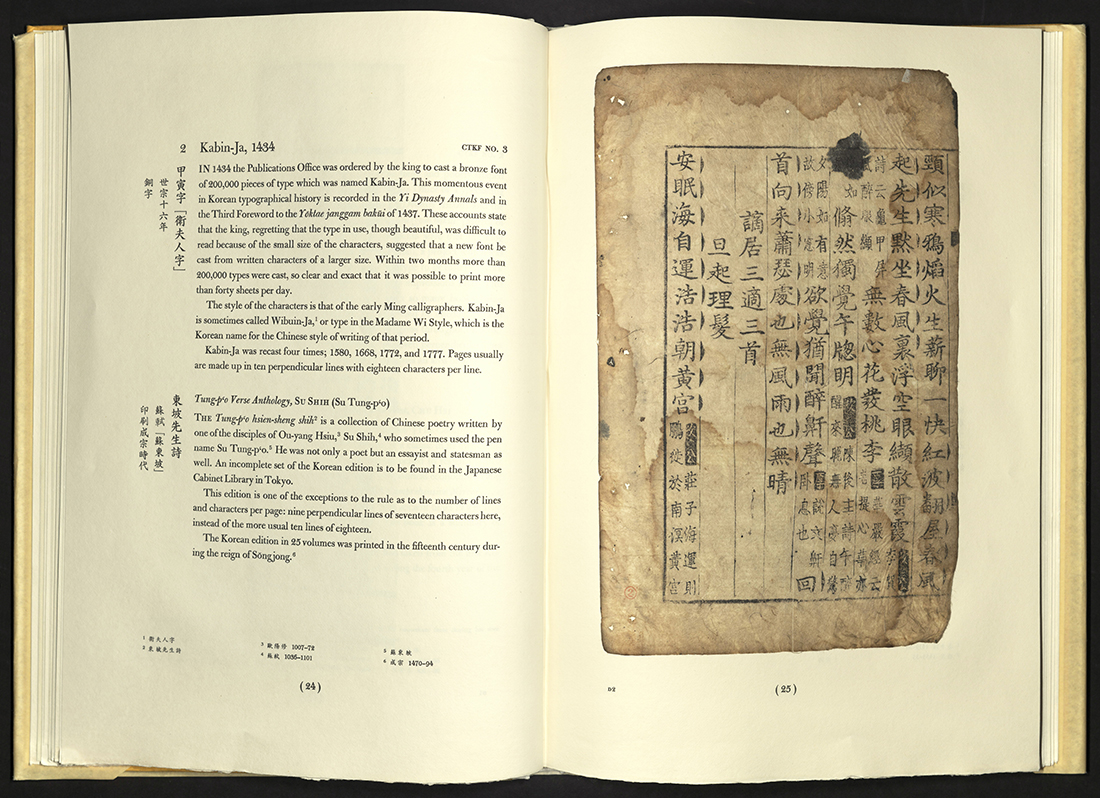 The oldest surviving Korean cast-metal printing types have been carbon dated to between 798 and 1166. Though a variety of titles were printed, the editions typically consisted of about one hundred copies, sometimes less. Thus, a Korean edition was considered scarce from the time it was published. Yes, printing with movable type was an effective way to reproduce multiple copies, but it was still slow and expensive. One had to consider the time it took to compose thousands of different characters and later hand print with delicate paper on large rough forms. Because of this, printed editions circulated chiefly among the nobility and scholarly bureaucrats.  In Korea, bronze types were used as early as 1239 to print the Jeungdoga, a poetical work written by a Chinese monk, which only exists today in a later woodblock edition. By the early fifteenth century, King T’aejong added the Chuja-so, or the Office of Typecasting, to the Publications Office, allowing movable bronze types to come into general use. In a few months, thousands of pieces of type were cast and the font was named Kemi-Ja, or the type of the year kemu. 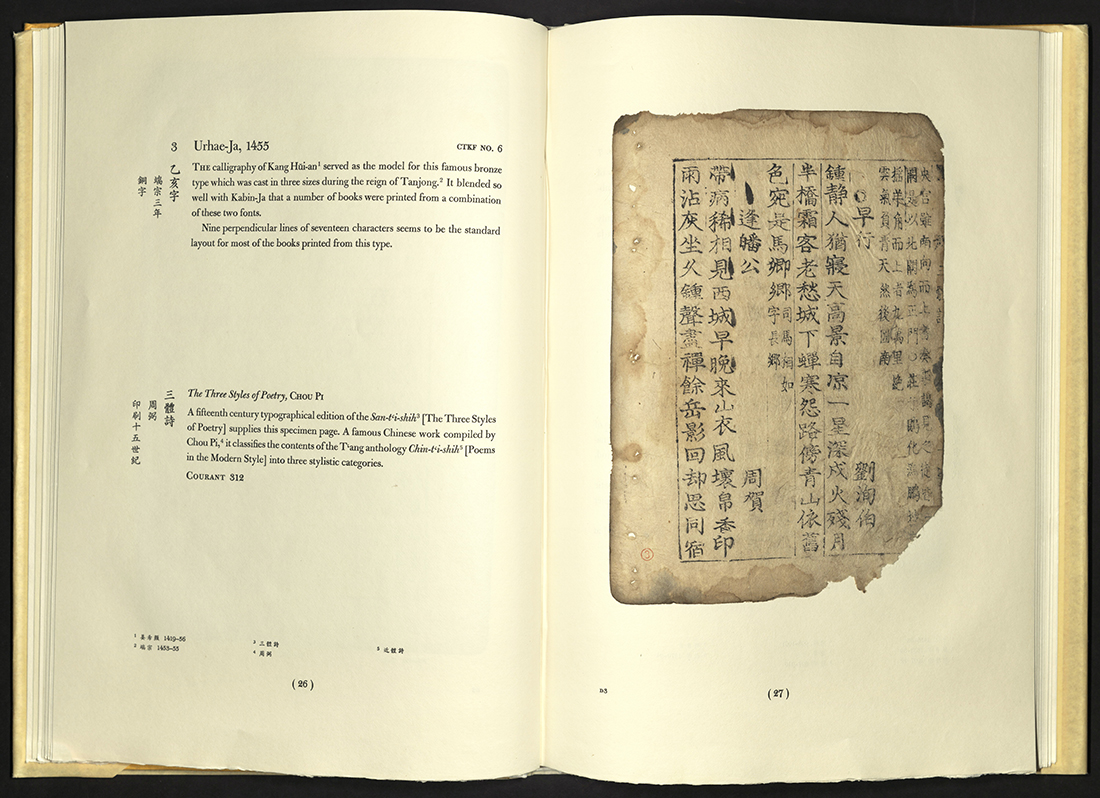 Specimen Pages of Korean Movable Types, Collected and Described was compiled and edited by Melvin P. McGovern, the Director of Education in the United States Army stationed in Uijongbu, Korea. During his eight years in Korea, McGovern carefully collected specimens of almost every font of Korean movable type from the classic periods, including some which are now considered very rare. In an effort to educate students and to illustrate the chronological development of this typographical achievement, twenty-two specimens are included in the volume — each sample from a different font and described in the facing text. The specimens range in date from the year 1420 ending with a comparatively modern font from 1858. The book was printed in an edition of three hundred copies. Of these, ninety-five copies comprise the Primary Edition, and are numbered from I to XCV. Although the specimens featured in the Primary Editions are all originals, McGovern did not have enough to complete the full set. For this reason, the later numbered copies, 96-300, include a varying count of original and facsimile specimens. Many of the specimen pages included were supplied by T’ong-Mun-Kwan in Seoul, which is considered to be the nation’s oldest rare bookstore. 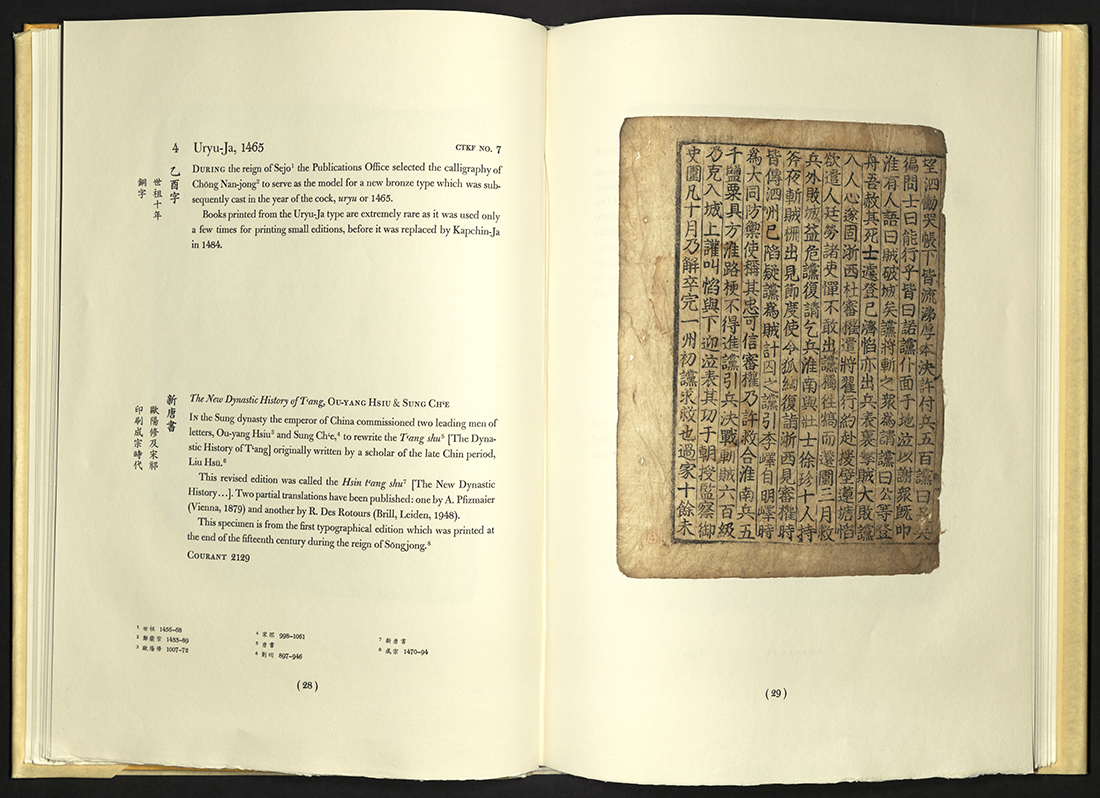 Just two years after Specimen Pages was published, Dr. Park Byeong-sun discovered an extant copy of Paegun Hwasang ch’orok Pulcho chikchi simch’e yojŏl, or Jikji, while he was working for the Bibliothèque nationale in France. The text was compiled by Master Baegun (1298-1374), recounts stories of venerated Buddhist Chan monks, and was printed by Baegun’s students shortly after his death. The sole surviving copy of Jikji contains an inscription on the last page that confirms the book was printed with metal movable type at Heungdeoska Temple, on the outskirts of Cheongju in 1377. Both the 42-line Gutenberg Bible and the Jikji were inscribed in UNESCO’s Memory of the World register in 2001 to mutually recognize their outstanding universal value. Yet Jikji, printed more than seventy years earlier, has remained nearly unknown in the West. That is, until now… 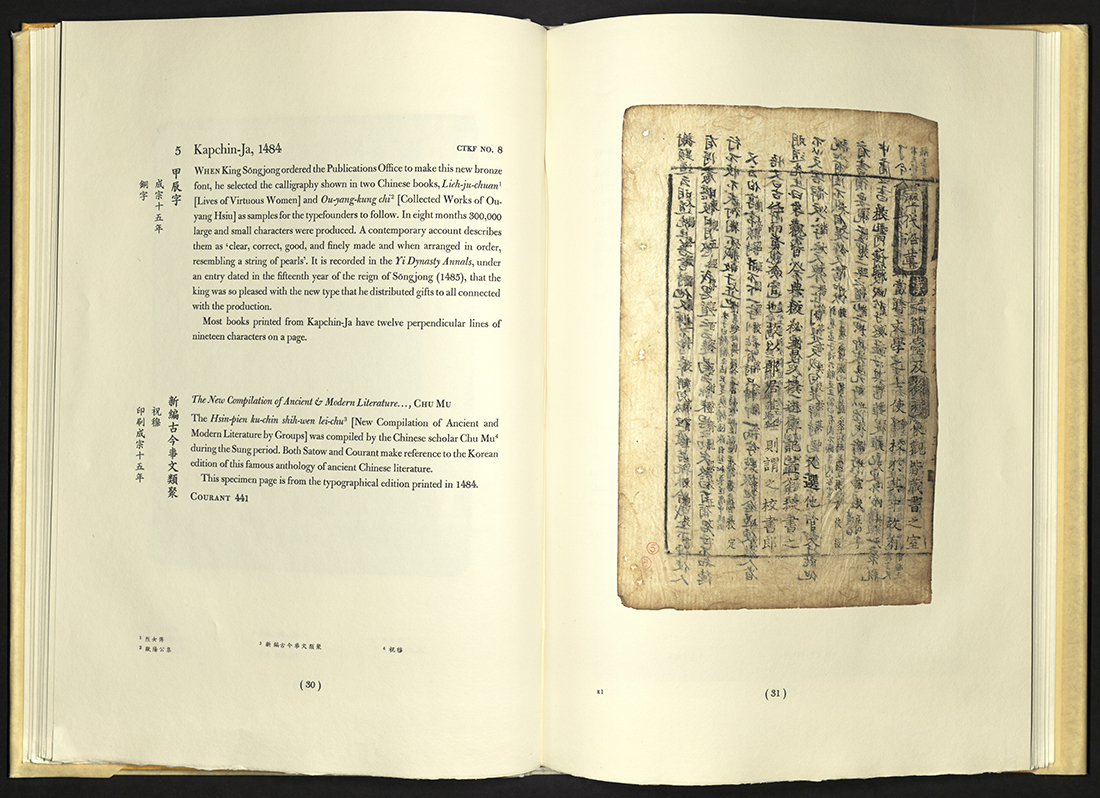 From Jikji to Gutenberg is a collaborative research project involving more than thirty scholars living in thirteen different time zones, including the Marriott Library’s own Randy Silverman, head of the Preservation Department. This interdisciplinary team is made up of historians, material specialists, conservators and scientists who have applied nondestructive multispectral and XRF imaging at Stanford University’s state-of-the-art Synchrotron Radiation Lightsource to study what appears to be independent developments that lead to thriving print cultures in both Eastern Asia and Western Europe. The project will also produce a catalog of scholarly essays to be published by The Legacy Press, which will accompany an international exhibit to be held simultaneously in forty-four research libraries. This cooperative transnational exhibit will commemorate the 650th anniversary of the printing of Jikji in July 2027.

Each exhibit will direct attendees toward the Bibliothèque nationale in France where its beautiful copy of the 42-line Gutenberg Bible will be showcased with the venerable Jikji displayed for the first time since 1973. With UNESCO’s participation, these synchronized exhibits will acknowledge Korea’s monumental gift to civilization while celebrating the interrelated origins of printing with a firsthand look at the range of rare cultural artifacts that epitomize the global historic foundations of book printing. 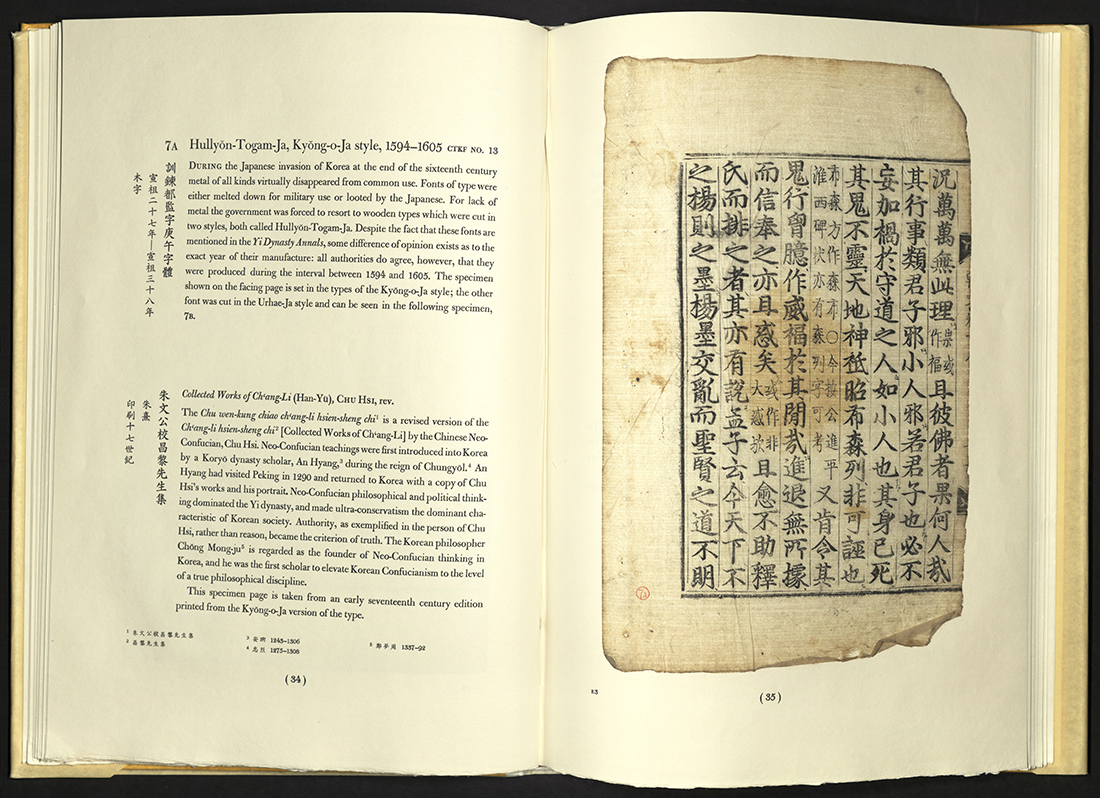 Published in 1966, with its letterpress pages, prominent folio size binding, and handmade papers, this book is not only an educational text on Korean movable types, but also an amazing example of fine press printing.  Specimen Pages was planned and produced in Tokyo at the Voyagers’ Press, LTD. The text was set in an experimental, modified version of the type cut for William Bulmer by William Martin in London, about 1780. The matrices were supplied as a special service by the Kobundo Typefoundry, Tokyo. The various handmade papers used for this entire volume were supplied by Sanborn, Inc., Tokyo, and were made under their direction to specifications provided by the Voyagers’ Press. Hand composition was done by Mr. Moriya Yoshiaki. Presswork by Mr. Horst Leonhard & Mr. Nako Yoshio.

Of this edition, three hundred copies have been printed for sale. Of these, ninety-five copies comprise the Primary Edition and are numbered from I to XCV. The remaining copies are numbered from 96 through 300. The University of Utah rare book’s copy is numbered LVII.