“Once upon a time in the land of Hushabye
Around about the wondrous days of yore
I came across a sort of box
Bound up with chains and locked with locks
And labeled, kindly do not touch, it’s war“ 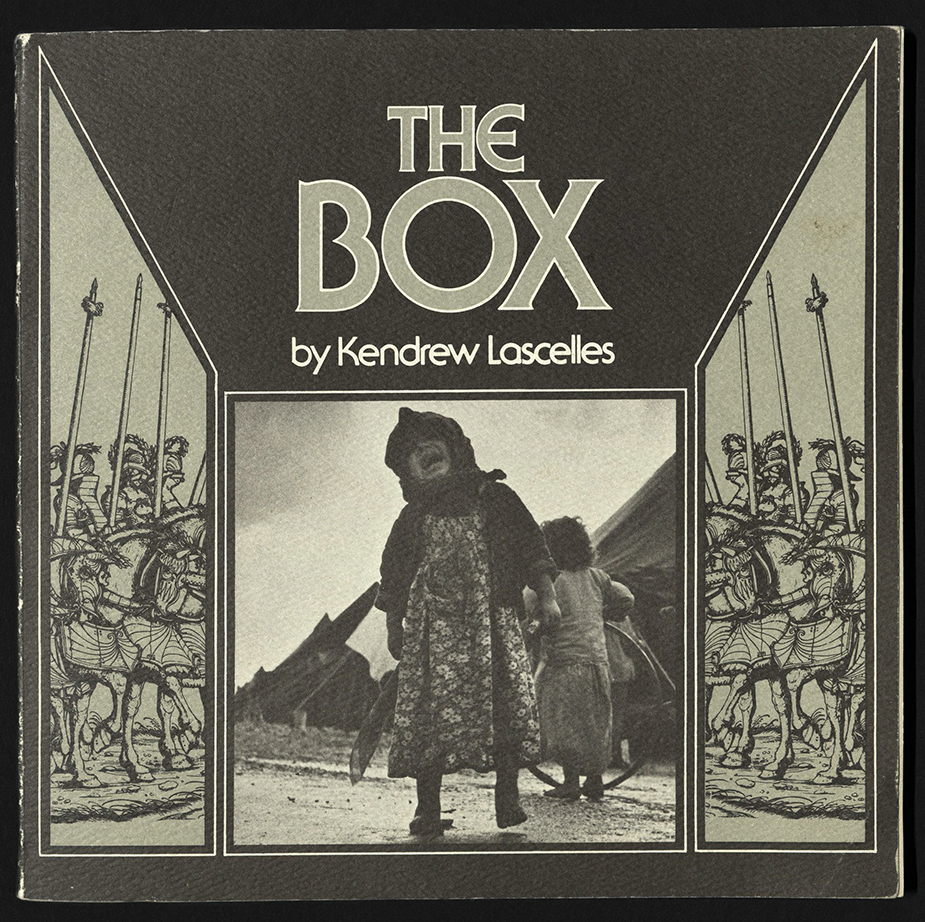 English-born Kendrew Lascelles showed interest in theater at an early age. His family had moved to South Africa for his health when he was just three-years-old and by the time he was in his teens they had firmly settled in KwaZulu-Natal. As a young boy, Lascelles was enrolled into training with the Shirley Parry Studio of Ballet, gaining his first professional role at the age of seventeen. By twenty, Lascelles moved back to the United Kingdom, in London, to continue his pursuits. After receiving Checetti Diplomas in ballet, Lascelles returned to South Africa in 1956 and began working professionally in theater. 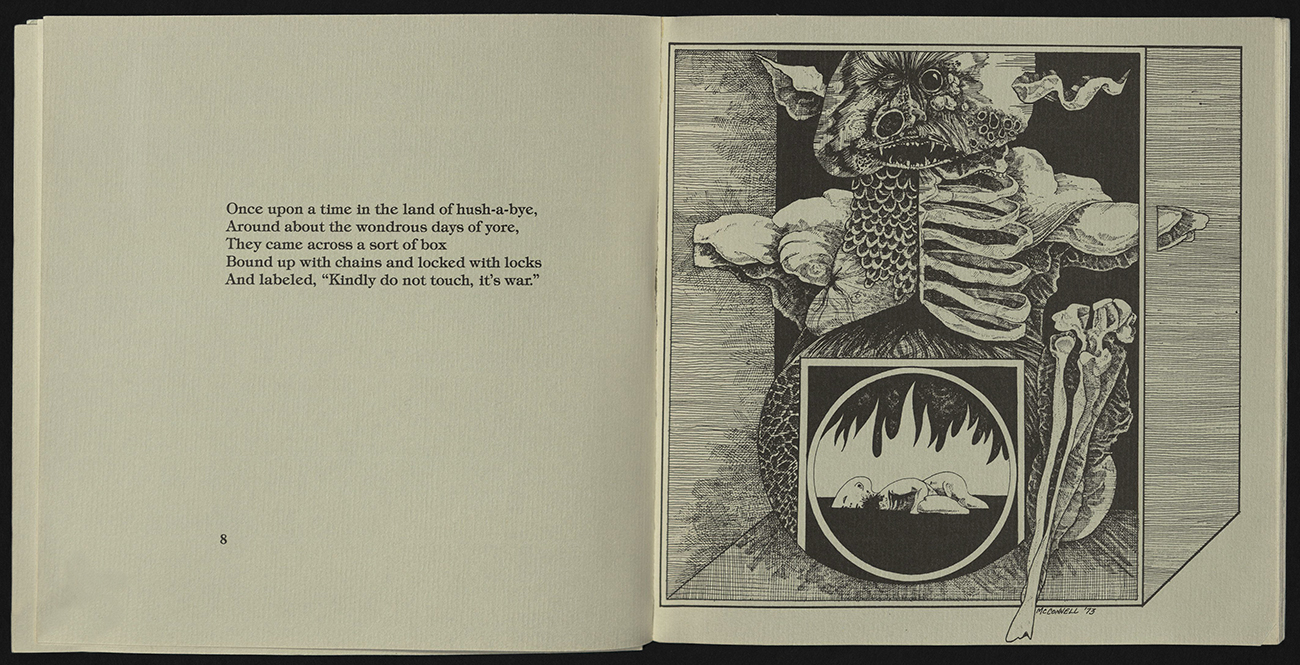 Lascelles was associated with National Theatre and the South African Ballet Company before he struck his first major success in 1962 with Wait a Minim! — a theatrical production he co-authored with Leon Gluckman. The anti-Apartheid revue opened in Johannesburg on January 17 at the Intimate Theatre and was met with international success. After running for approximately three years in South Africa, Lascelles and the cast transferred to London, opening at the Fortune Theatre. Then, following fame in Europe, the show moved to Broadway where it opened at the John Golden Theatre on March 7 1966, and ran for 456 performances, until April 15 1967. At the conclusion of the revue’s seven-year run, Lascelles decided to make his home in the United States, where he continued to write and perform until his death in March of 2022. 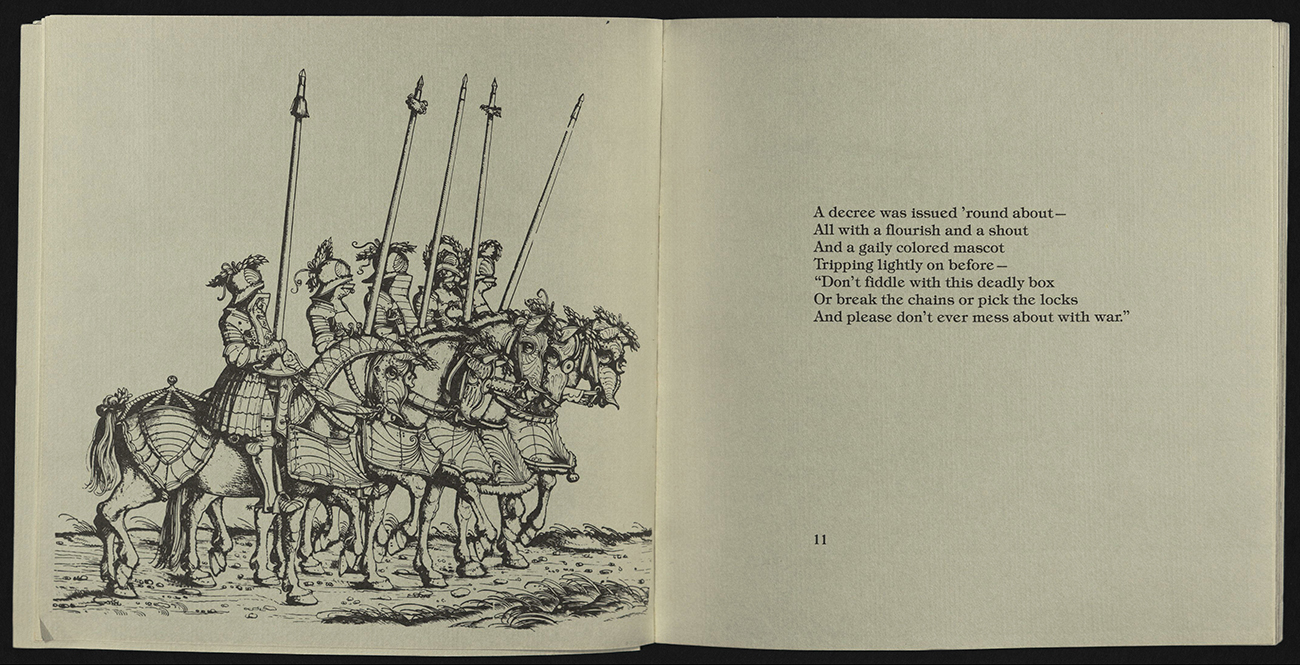 During and after his work with Wait a Minim! Lascelles appeared as a guest on various talk shows across the world, including those hosted by David Frost, Steven Allen, and Ed Sullivan. As he settled in the states, Lascelles also began writing scripts for television, most notably for the Dean Martin Show and the Smothers Brothers. By the late 1960s ,The Smothers Brothers Comedy Hour had become one of the most controversial American TV programs of the Vietnam War era. Despite popular success, the brothers’ penchant for material that was critical of the political mainstream and sympathetic to the emerging counterculture led to their firing by the CBS network in 1969. A replacement series, The Summer Brothers Smothers Show, was later picked up by ABC TV and featured Lascelles reciting his now famous anti-war poem, “The Box,” in 1971. 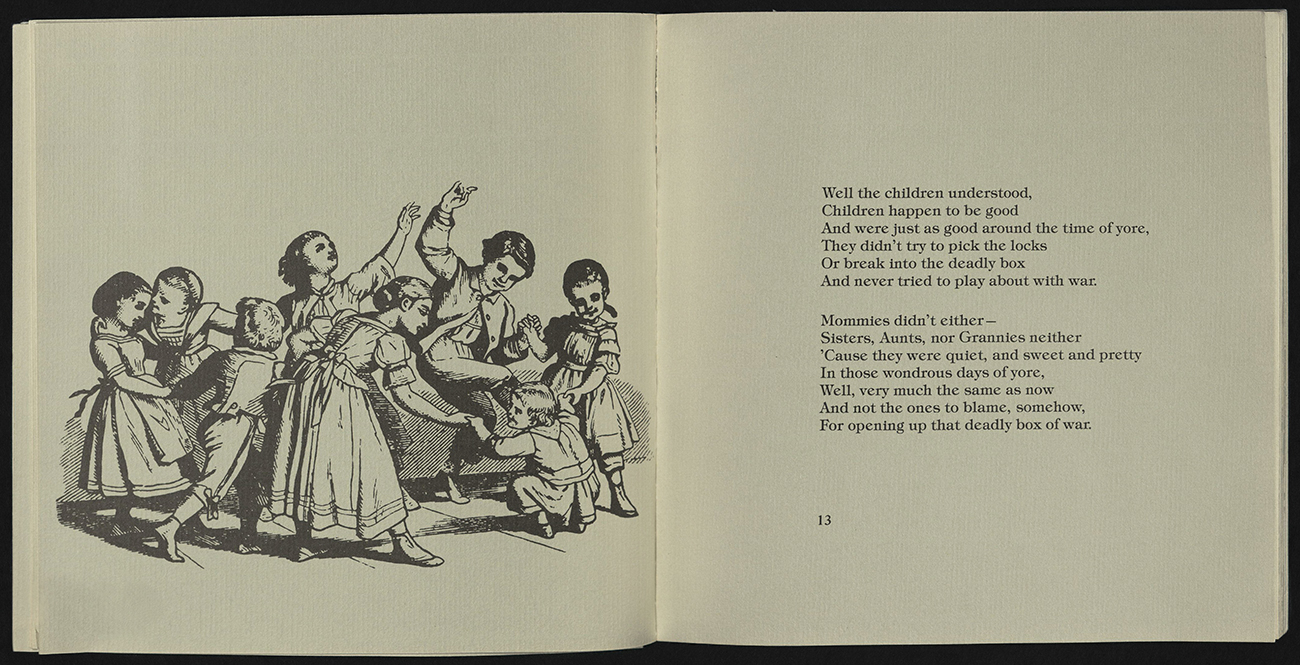 After the broadcast, the Smothers Brothers show received four million contacts and one million letters from fans, with requests for copies and further performances. American singer-songwriter, John Denver, liked the poem so much he began singing it as a song in his repertoire of recitals. It was later featured on his 1971 album Poems, Prayers & Promises and also on Lascelles own album, Earth Fungus and the Stuff of Stars. Actors Jack Lemmon and Peter Lawford also recited the poem and it has since been recorded, performed, recited and played around the world. It continues to be as timely today as it was when Lascelles first wrote it. 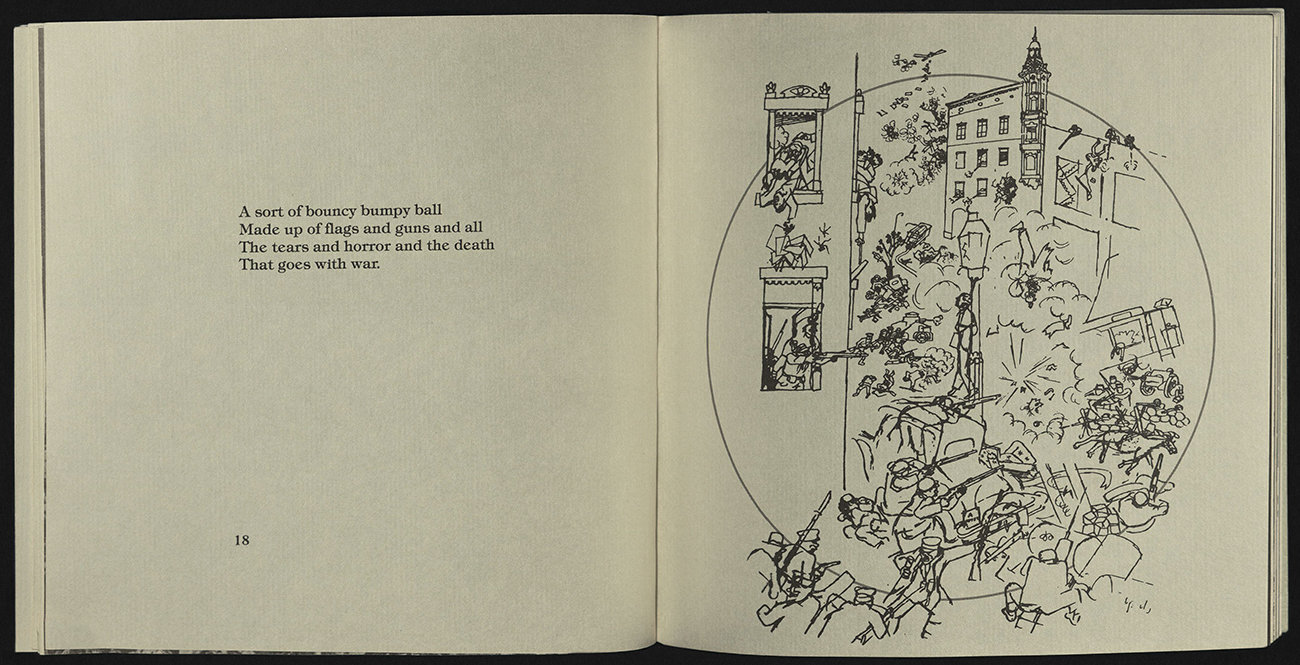 Lascelles was involved in various areas of show business — as an actor, writer, producer, and director of records, plays, and films. He continued to appear on television and talk shows throughout the 1960s and 70s as a popular counter-culture icon and later devoted much of his time to writing. Over the course of his life, Lascelles wrote four novels, seventeen plays, two produced screenplays, four musicals, a television mini-series, and four anthologies of poems. His works are most notably known for raising the profile of issues of major social conscience, particularly Apartheid and the Vietnam War. 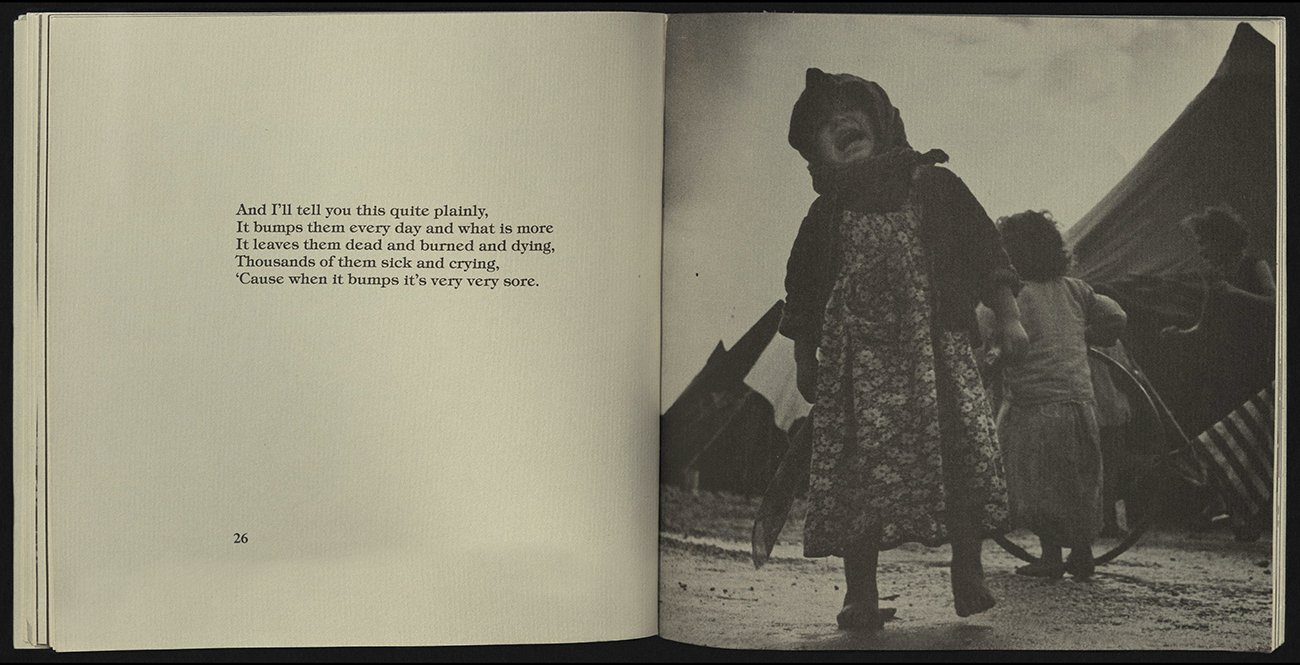 “The Box” was first put into print by Nash Publishing of Los Angeles, California. The text for the poem was set in ten and twelve point Tiffany Medium by Adtype Service Company. The display was set by Andresen Typographics in Serif Gothic Open. Editing and pictorial research by Ruth Glushanok. Book design by Kadi Karist Tint. 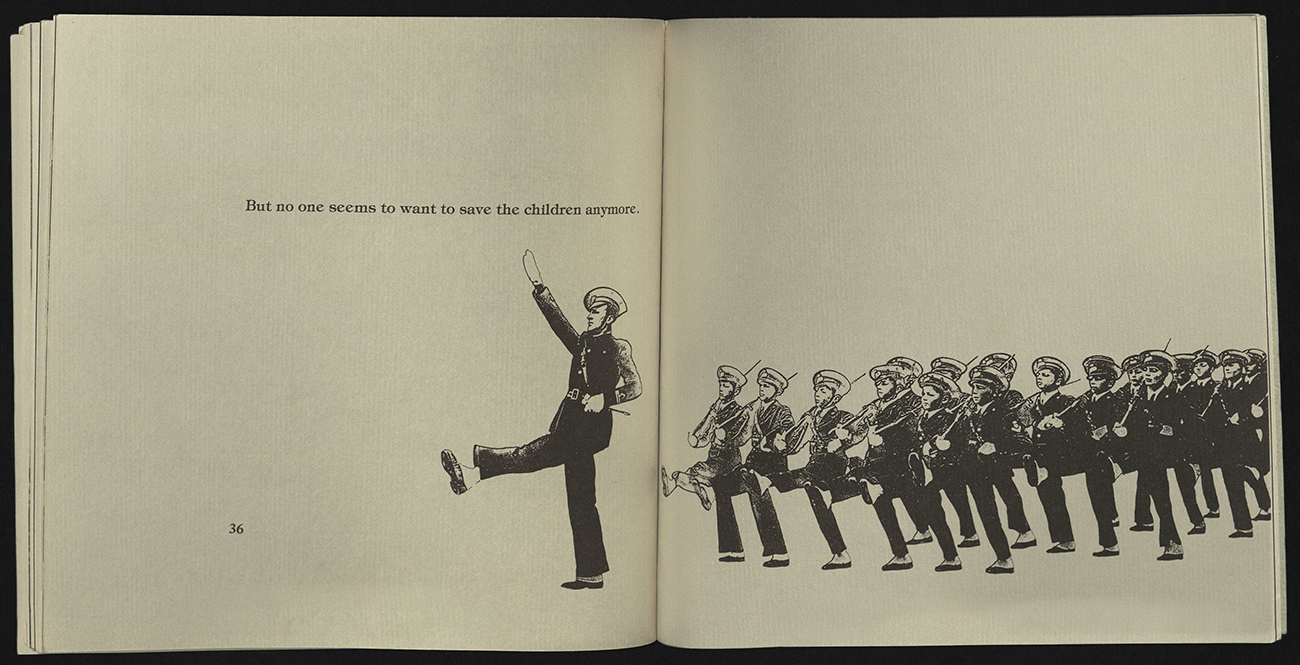 “The Box” by Kendrew Lascelles

Once upon a time in the land of Hushabye
Around about the wondrous days of yore
I came across a sort of box
Bound up with chains and locked with locks
And labeled kindly do not touch, it’s war

Decree was issued ’round about
All with a flourish and a shout
And a gaily colored mascot tripping lightly on before
Don’t fiddle with this deadly box, or break the chains, or pick the locks
And please, don’t ever play about with war

Well, the children understood
Children happen to be good
They were just as good around the time of yore
They didn’t try to pick the locks, or break into that deadly box
They never tried to play about with war

Mommies didn’t either
Sisters, aunts, grannies neither
Cause they were quiet, and sweet, and pretty in those wondrous days of yore
Well, very much the same as now, not the ones to blame somehow
For opening up that deadly box of war

But someone did
Someone battered in the lid
And spilled the insides out across the floor
A sort of bouncy, bumpy ball made up of guns and flags
And all the tears, and horror, and the death that goes with war

It bounced right out
And went bashing all about
And bumping into everything and stored
And what was sad and most unfair is that it didn’t seem to care who much it bumped
Or why, or what, or for

It bumped the children mainly
And I’ll tell you this quite plainly
It bumps them every day, and more and more, and leaves them dead and burned and dying
Thousands of them sick and crying
Cause when it bumps, it’s really very sore

Now, there’s a way to stop the ball
It isn’t difficult at all
All it takes is wisdom; I’m absolutely sure that we could get it back into the box
And bind the chains and lock the locks
No one seems to want to save the children any more

Well, that’s the way it all appears
Cause it’s been bouncing ’round for years and years
In spite of all the wisdom since those wondrous days of yore
And the time they came across the box
Bound up with chains and locked with locks
And labeled “kindly do not touch, it’s war”