31 Oct Book of the Week — The Case for Spirit Photography 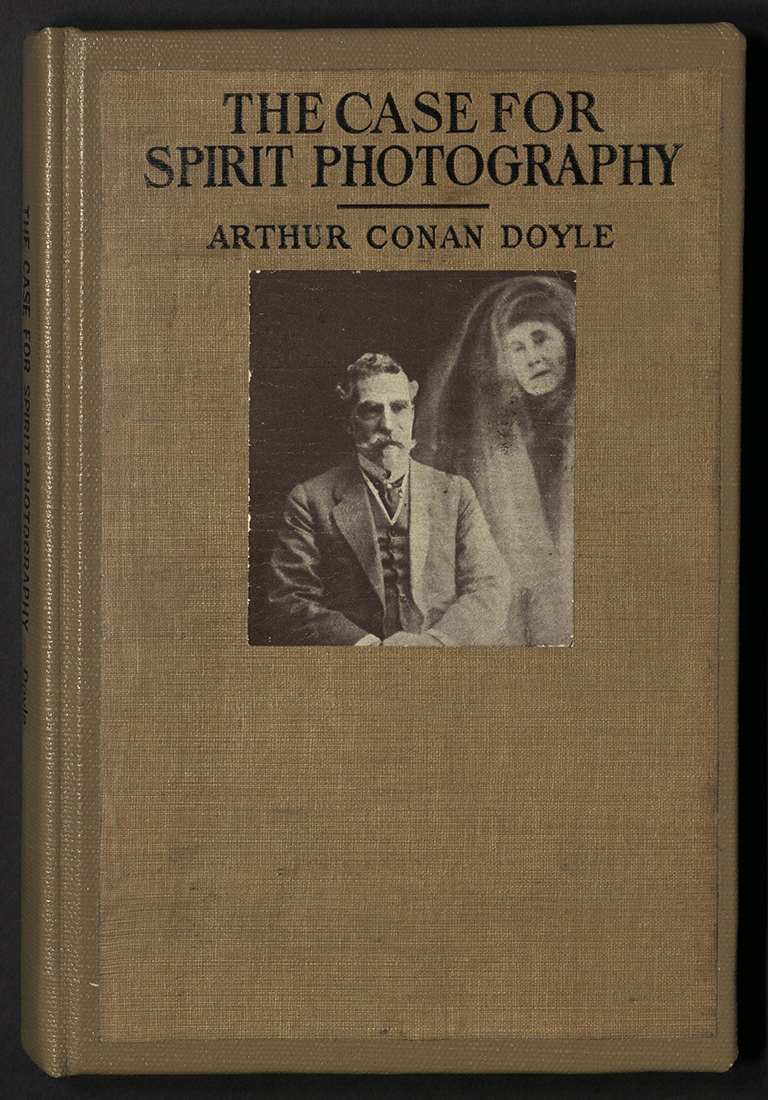 While many readers may recognize the name ‘Arthur Conan Doyle’ as the creator of the legendary detective, Sherlock Holmes, few know of Conan Doyle’s pursuit of the afterlife and the world of spirits. A devout member of the Spiritualist movement, which gained popularity in the nineteenth century, Conan Doyle spent the last decades of his life attempting to bridge the gap between science and religion. In May of 1923, he brought his Spiritualist crusade to Utah, where he would deliver his message on the subject of “Recent Psychic Evidence” to an audience of nearly five thousand at the pulpit of the Mormon Tabernacle. He began his speech — which had been delivered across many cities in the United States — with what he considered “tangible proof” to the existence of life after death. Some of the evidence included “spirit photographs” which showed materialized spiritual forms captured during séances. In addition to the images, Conan Doyle’s two-hour lecture explained (and proselytized) the doctrines of Spiritualism. The same year, his book The Case for Spirit Photography was published in the United States. 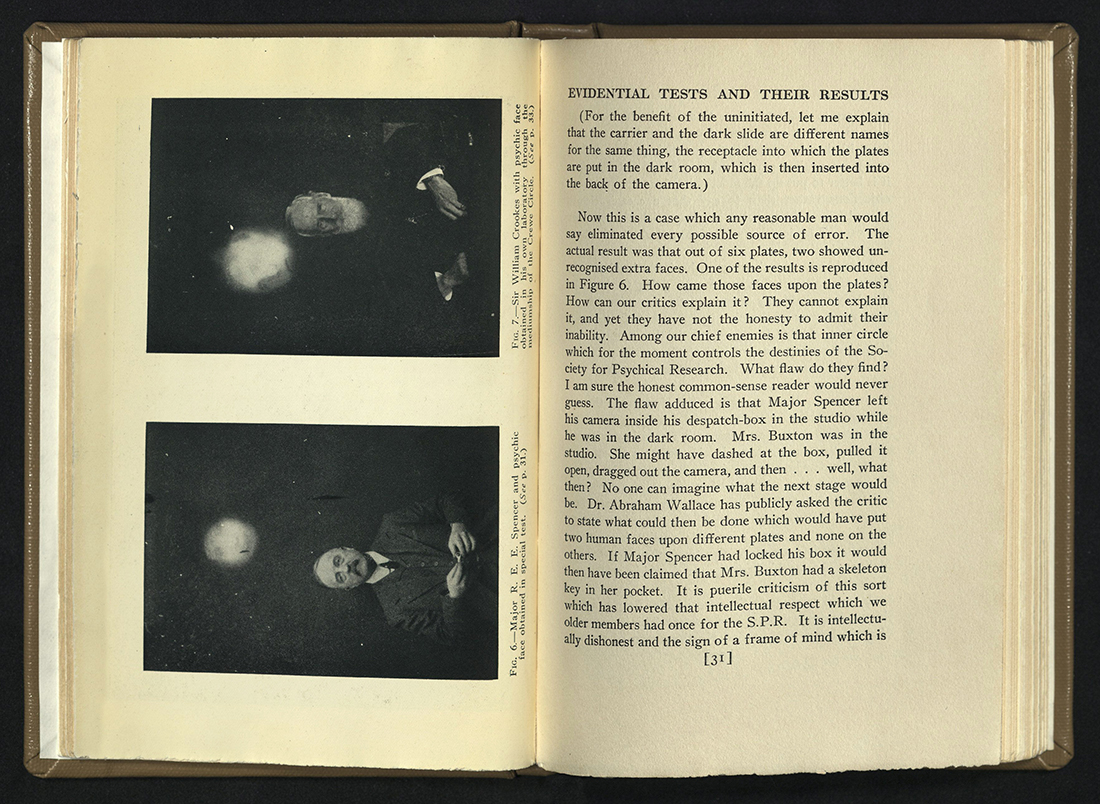 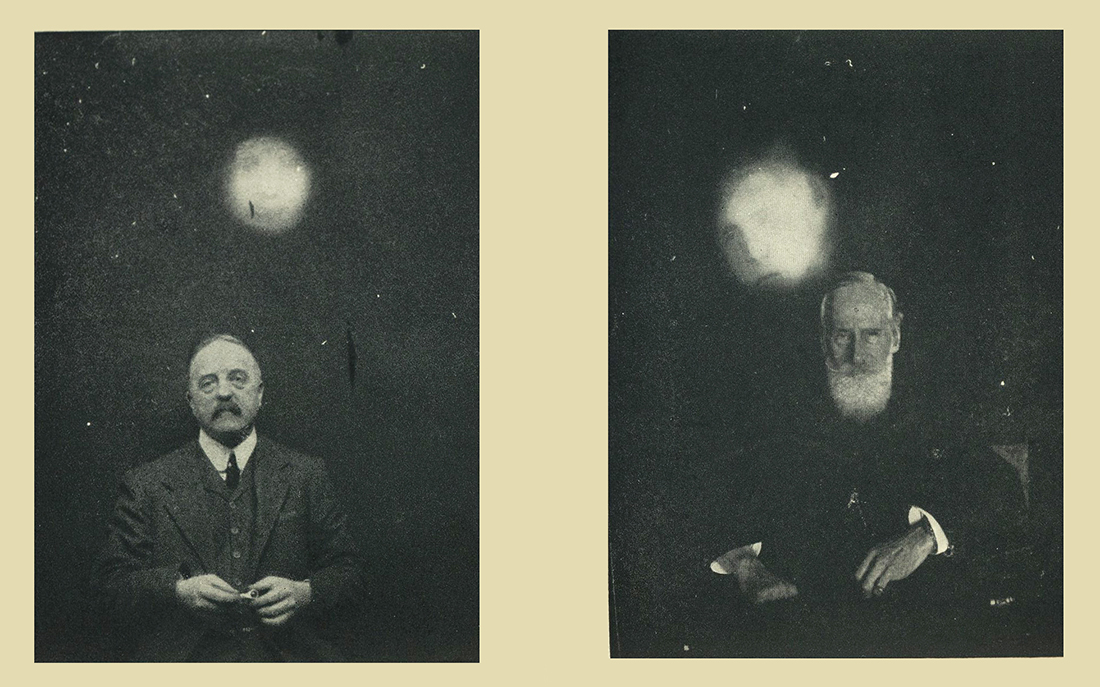 Arthur Conan Doyle was born in Edinburgh, Scotland to a family of Irish Catholic descent. At the age of nine, he was sent to England to attend Hodder Place, a Jesuit preparatory school. He went on to attend Stonyhurst College and Stella Matutina, two other Jesuit schools, before enrolling at the University of Edinburgh to study medicine in 1875. By this time, he had already considered himself to be a “non-believer” and was conflicted by what he deemed were extreme doctrines of the church: that of papal infallibility and Immaculate Conception. For Conan Doyle, such ideas made it difficult for a man with scientific desire for truth to keep within the Church. Furthermore, he resented the idea that all those outside the Church were destined for damnation. He looked for an alternate path and found himself inspired by materialists, such as the surgeon and lecturer, Joseph Bell — the prototype for Sherlock Holmes — who taught his students deductive reasoning through the observation of material phenomena. With this in mind, Conan Doyle sought to find the connection between science and religion: definite proof of the existence of life after death. 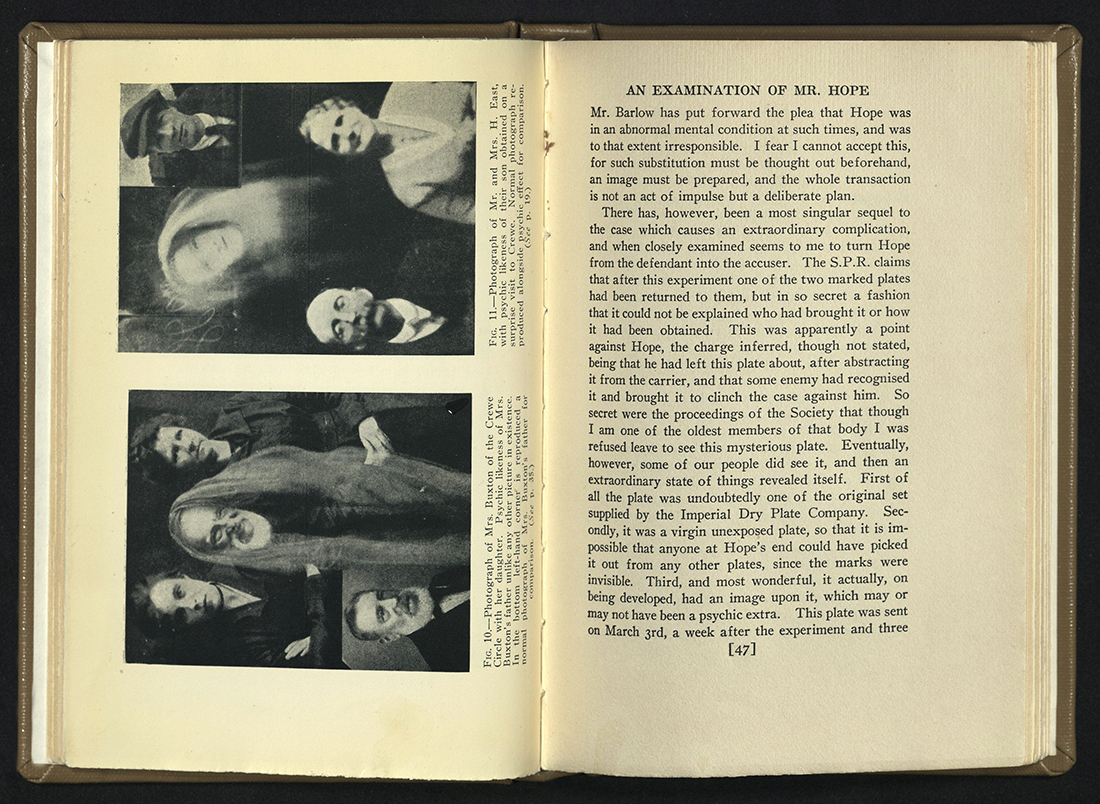 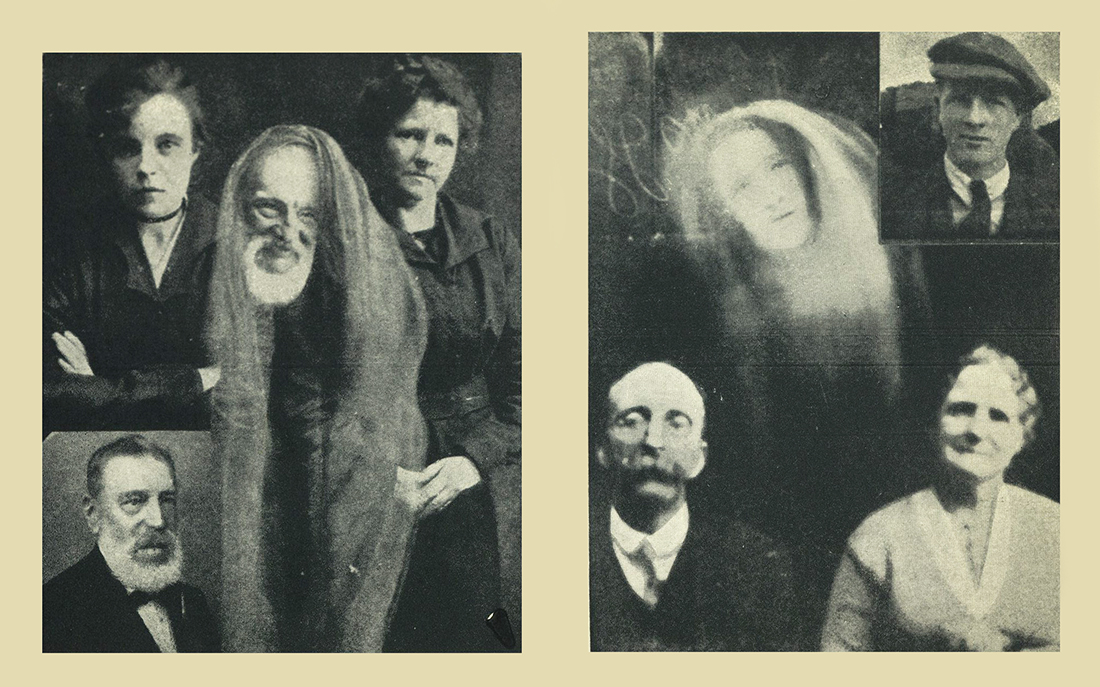 In 1880, at the age of twenty-one, Arthur Conan Doyle attended his first séance and began exploring the tenets of a new religious movement called Spiritualism. Spiritualism originated in Hydesville, New York sometime in 1848 at the farmhouse of John D. Fox. The Fox family had, for some time, been disturbed by unusual and unexplained “rapping” — noises and thuds that would occur at night throughout the house. The perpetrator would be revealed by the youngest Fox daughter, Kate, as a spirit who had been murdered five years earlier and buried in the basement of the Fox home. Neighbors and other witnesses confirmed the raps and soon the two daughters began organizing “sittings” as mediums, in order to communicate with other spirits. From New York, the Spiritualist movement spread across the United States and England, reaching the height of its popularity in the 1880s. For Conan Doyle, Spiritualism offered scientific evidence of departed spirits, delivered through mediums or by the materialization of ectoplasm forms in photographs on previously unexposed film. Throughout the decade, Conan Doyle’s own writings began to reflect his growing interest in the movement. 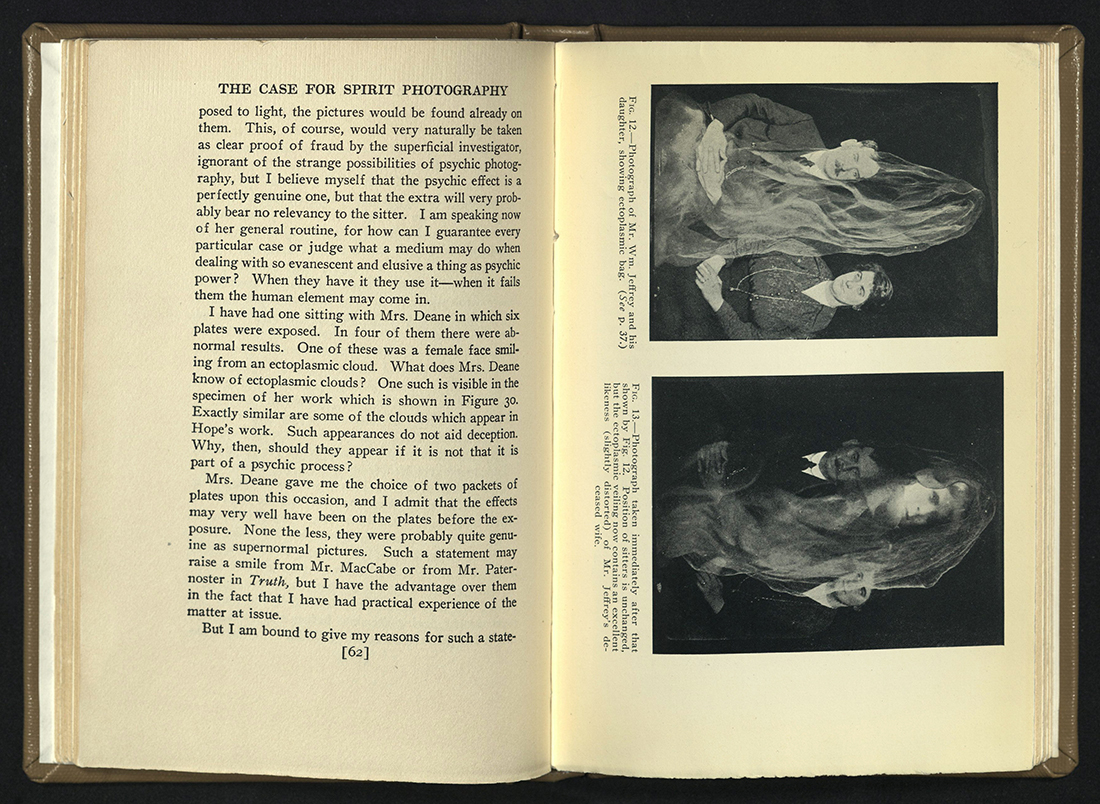 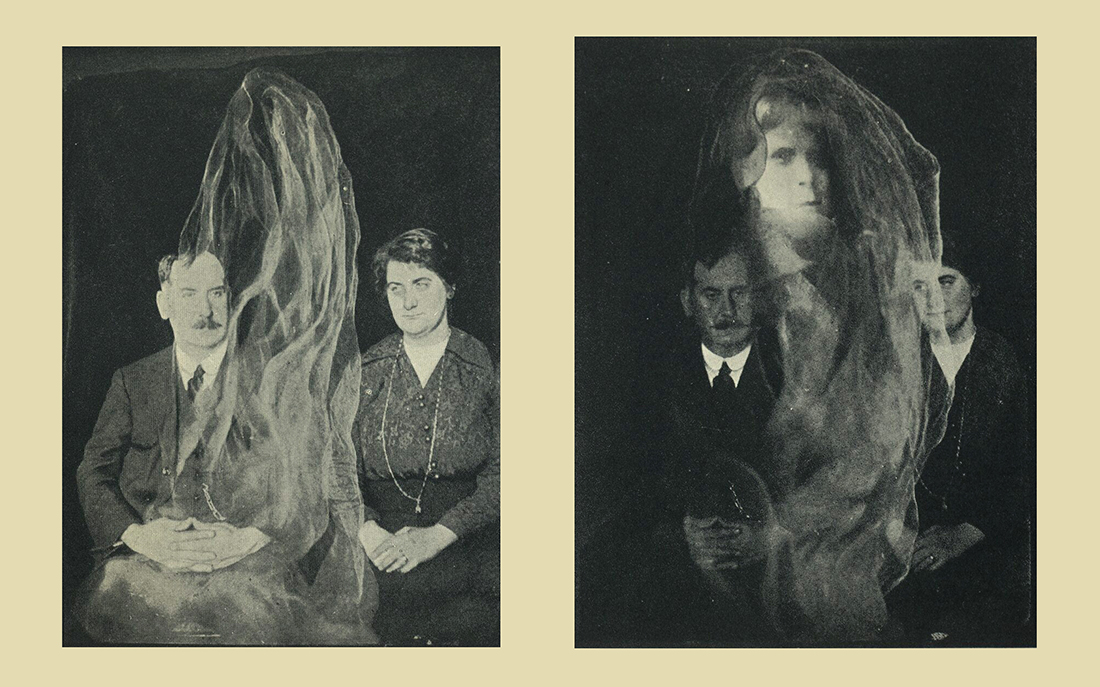 But Spiritualism was not the only religion that Conan Doyle explored. His investigation into Mormonism was made clear after the publication of A Study in Scarlet in 1887 — the first detective novel to introduce detective Sherlock Holmes and his companion Dr. John Watson. The novel is split into two parts. The first revolves around the mystery of a corpse found at a derelict house in Brixton, with the word “RACHE” scrawled in blood on the wall beside the body. The second, titled “The Country of the Saints” largely features the history of the Mormons in Utah from 1847 until the early 1860s. Conan Doyle drew many of the historical details of the story from accounts written by Fanny Stenhouse, Eliza Young, and other sensationalist authors whose works were available to Doyle in England. Additionally, his view of Mormon history and culture was influenced by the English press and, more specifically, their condemnations of polygamy, autocratic leadership, and the activities of avenging angels. Though Conan Doyle’s characterization of the LDS Church and the early Utah Territory drew heavy criticism at the time of its publication, the relationship had been mended by the time he arrived in Utah on his Spiritualist crusade more than thirty-five years later. 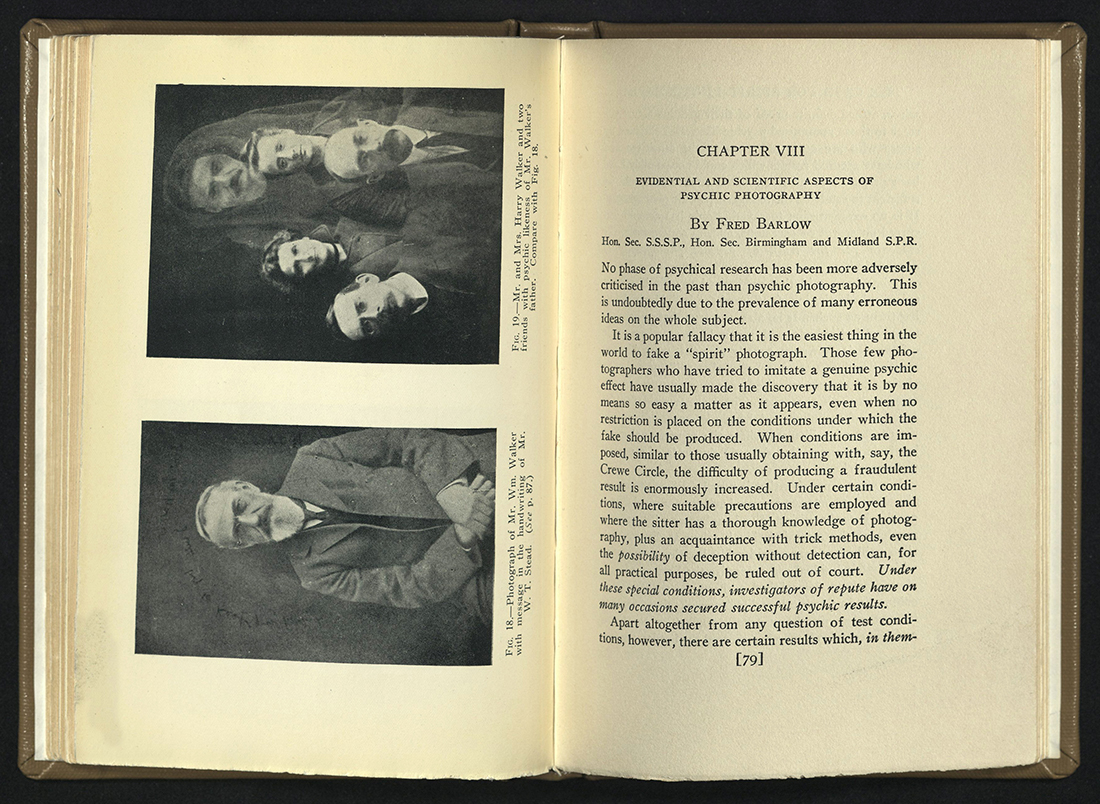 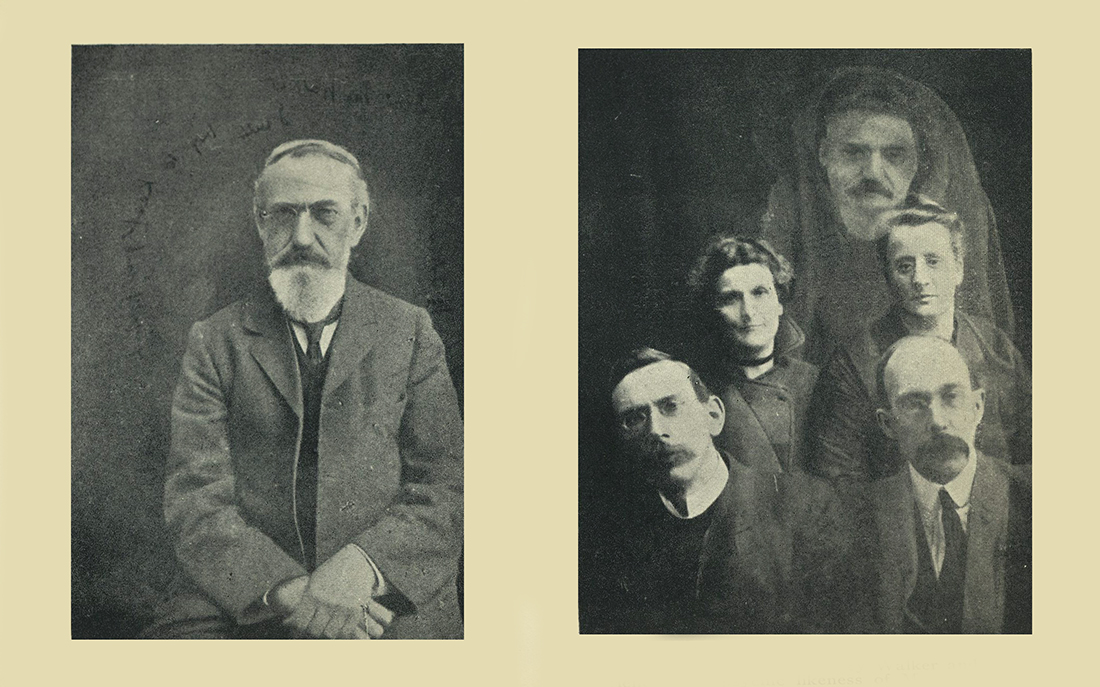 Following the publication of A Study in Scarlet, Conan Doyle officially declared his conversion to Spiritualism. Writing to Light, a Spiritualist newspaper, he recalled the events that led to his cemented belief. Over the course of several séances, meetings with mediums, table tilts, controlled writing and photography sessions, one event gave Conan Doyle the proof he needed. While writing “under control” a medium had directed a message toward Conan Doyle to not read that book by Leigh Hunt. He hadn’t told anyone he was debating that very thing, and was thus convinced that there must be life after death. From 1888 on, Conan Doyle was actively involved in the Spiritualist movement. He had joined the Society of Psychical Research, contributed hundreds of articles to Light and other publications, wrote  several books on the topic, including The New Revelation (1918) and The Vital Message (1919), along with a two-volume history of Spiritualism, which continues to be considered an authoritative work on the subject today. He traveled thousands of miles, across four continents to spread the message and even opened up a bookstore and museum. Despite all this, and his notoriety as an author, he was not able to convince neither the religious or scientific communities that the evidence was real. Instead, he was met with heavy criticism and rejection. 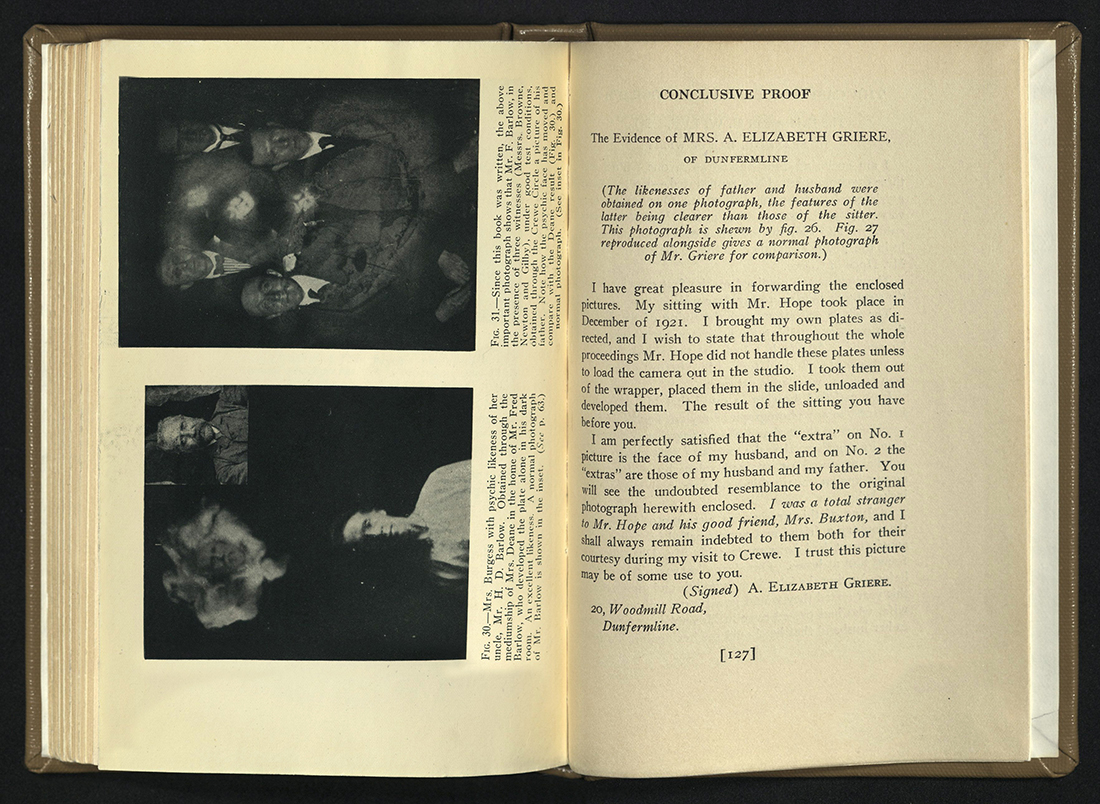 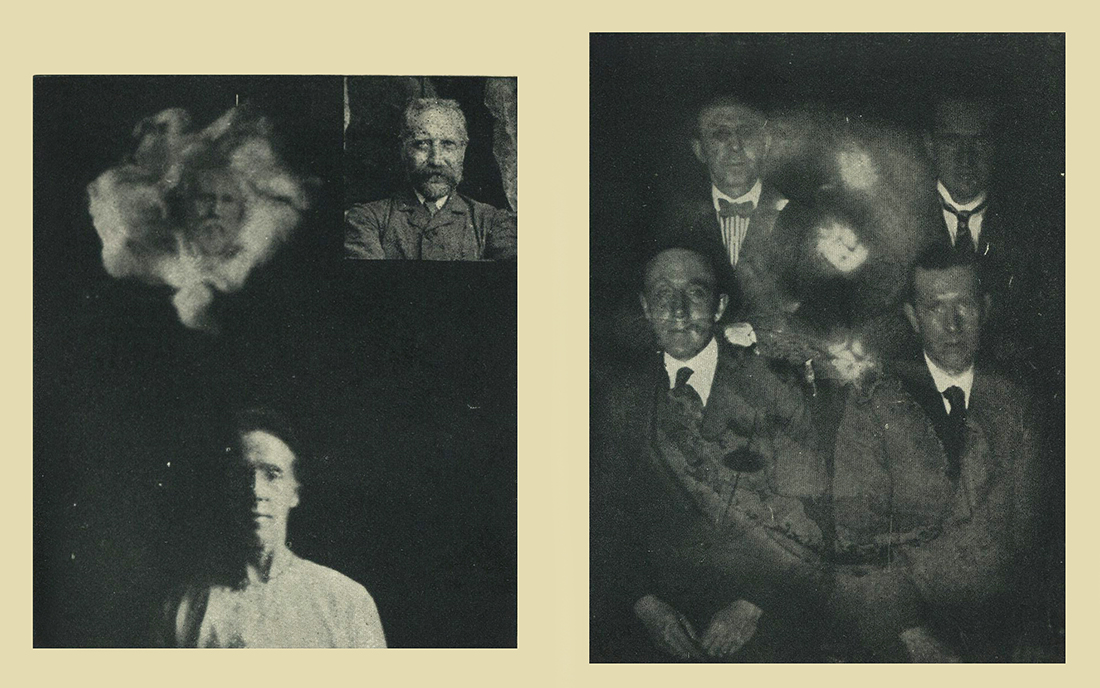 It did not help that Conan Doyle continued to support the works of those who had been labeled “frauds.” One such figure was photographer William Hope. The Case for Spirit Photography was written by Arthur Conan Doyle in an attempt to defend Hope and the Crewe Circle because their spirit photographs were accused of fraud by Harry Price at a sitting in 1922. Spirit photography, or ghost photography, dates back to the late-nineteenth century and was made popular by the Spiritualist movement. Conan Doyle’s defense was first published in England by Hutchison and Co. in 1922, the following year the American edition from George H. Doran was released. Both included thirty-two images of photographic “evidence” as well as detailed explanations that were used to defend Hope and the Crew Circle. In addition to Conan Doyle’s volume, several other books were published defending the possibility of spirit photography. Among them were Georgiana Houghton’s Chronicles of the Photographs of Spiritual Beings and Phenomena Invisible to the Material Eye (1882) and James Coates’ Photographing the Invisible (1911).