19 Oct Book of the Week — The Horse in Motion

Posted at 12:30h in Book of the Week, Rare Books by lyuba 3 Comments
2 Likes
Share 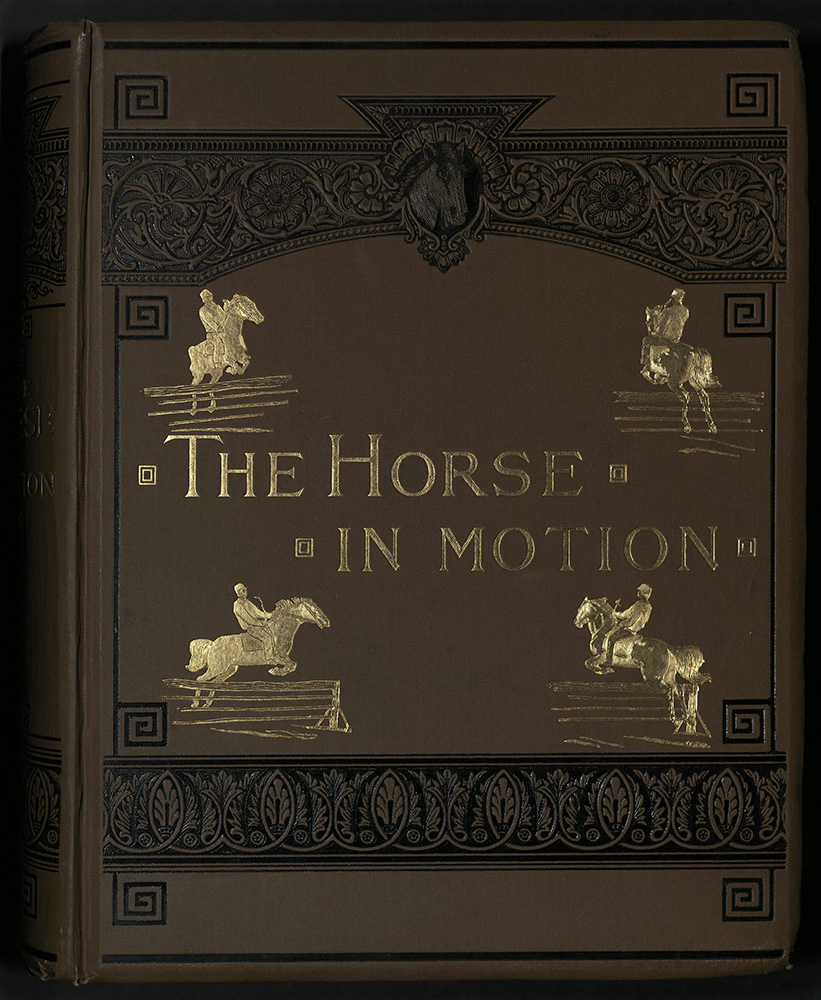 “If one wanted to find an absolute beginning point, a creation story, for California’s two greatest transformations of the world, these experiments with horse and camera would be it.” 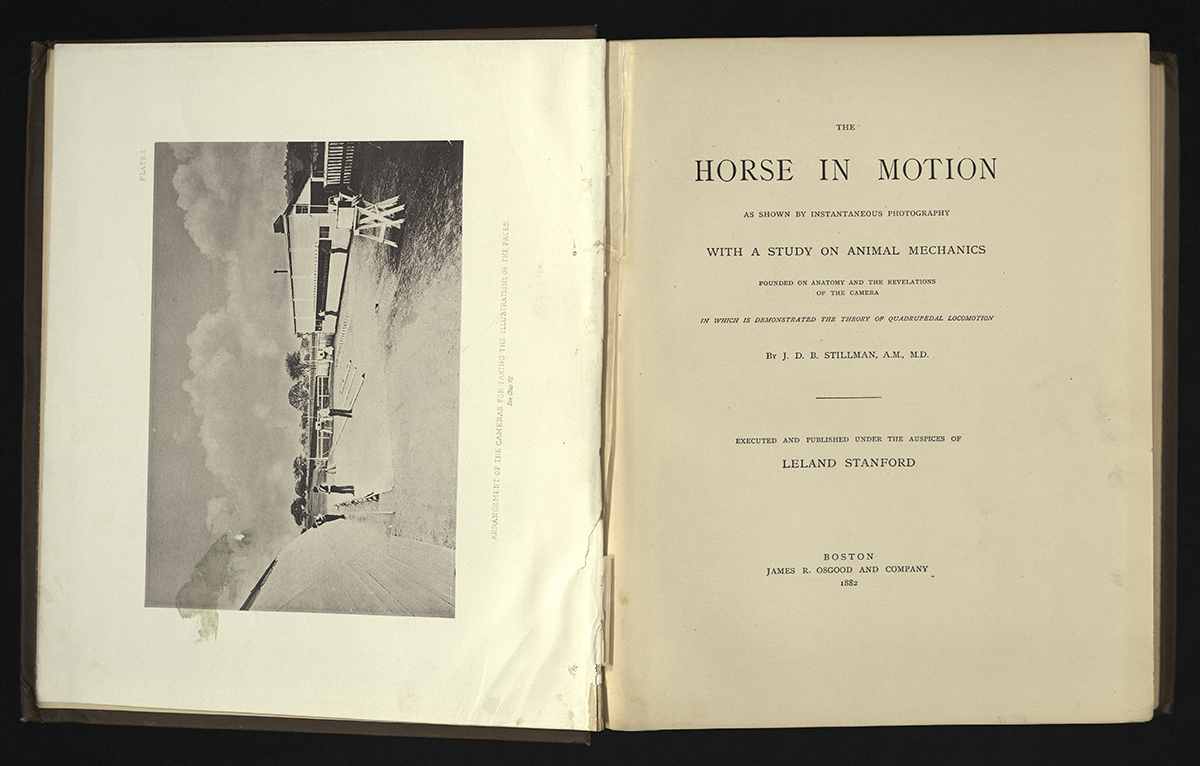 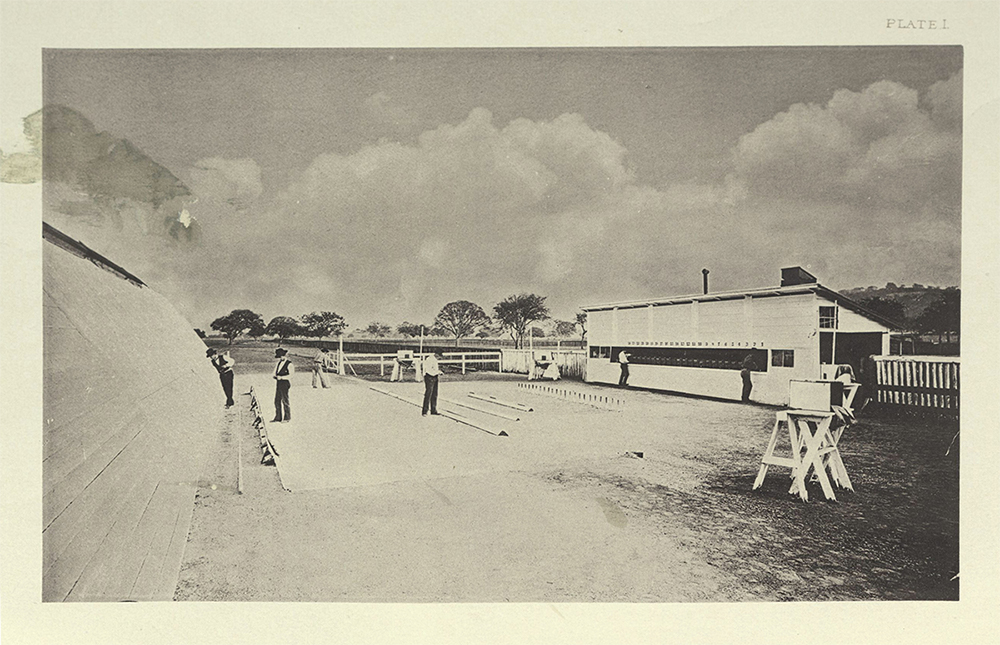 “Arrangement of the cameras for taking the illustration of the paces” 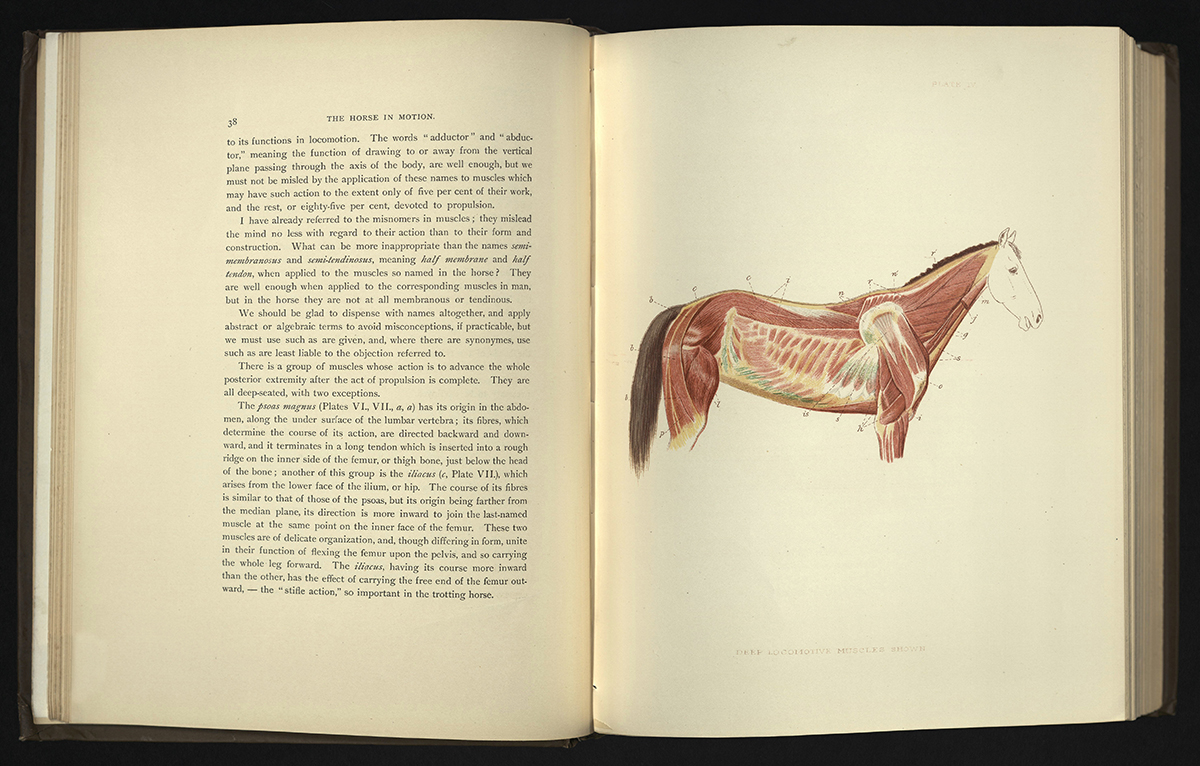 One of the most famous photographs ever taken was that of a horse — a horse in motion, to be exact. The photograph of the horse was taken by Eadweard Muybridge, best known for his pioneering work on motion studies. Originally from the United Kingdom, Muybridge emigrated to the United States during the mid-nineteenth century. He initially settled as a bookseller in New York, but later found himself in San Francisco, California. It was in California where Muybridge eventually took on the occupation of professional photographer, dealing mostly with the cityscapes of San Francisco and the landscapes of Yosemite Valley. The images of Yosemite, displayed in an exhibition in 1868, provided Muybridge with critical acclaim, but it would be Muybridge’s later photographs of the horse in motion that would go on to revolutionize photography and pave the way for motion pictures and cinema as we know it today.

In the context of an era, Muybridge began his motion studies during the same time that the telephone, phonograph, telegraph, and railroad were “annihilating time and space” — a catchphrase that became invariably overused during the nineteenth century. But the connection between the railroad and photography didn’t simply exist as metaphor. Muybridge’s first patron of arts happened to be none other than Leland Stanford, former Governor of California and President of the Central Pacific Railroad. Stanford was not only a politician and businessman, he was a race-horse owner but also a philanthropist with particular interest in art and science. As such, Stanford commissioned Muybridge to photograph his expansive estate, including his famed horse, Occident. 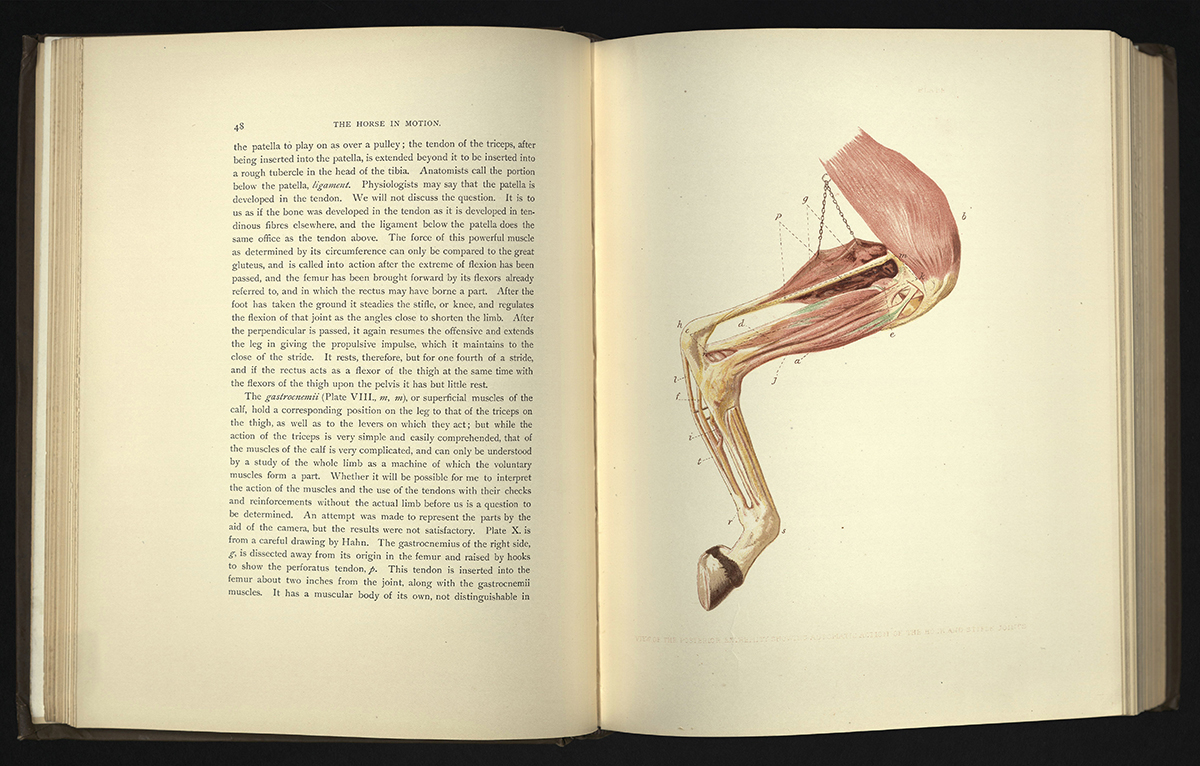 In the spring of 1872, Eadweard Muybridge photographed a horse. He did so to settle a debate for Stanford about whether or not a trotting horse ever had all four feet of the ground. Although the photograph was blurry, it confirmed that horses did, in fact, have all feet off the ground while trotting or galloping, but unlike most artists’ depictions — with the front legs extended forward and the hind legs extended to the rear — the legs were brought in under the torso. From this initial experiment, Muybridge had captured aspects of motion whose speed had made them invisible. He was on the verge of revolutionizing photography and needed money and resources to continue. For this, he turned to Stanford.

“If one wanted to find an absolute beginning point, a creation story, for California’s two greatest transformations of the world,” author Rebecca Solnit writes, “these experiments with horse and camera would be it.” The experiments began in May of 1877 on Stanford’s sprawling estate forty miles south of San Francisco, in Palo Alto. The site would later become the grounds of Stanford University, established in 1885. But first it was Muybridge’s laboratory and studio. The stables were fitted with a row of cameras — twelve at first, and later twenty-four — positioned in front of a white wall. The wall was built with the distance marked off with lines and numbers at intervals of twenty-one inches. Resembling a giant ruler, the numbers made clear that the horses were in motion, though in the photographs they always appeared in the center of the frame. 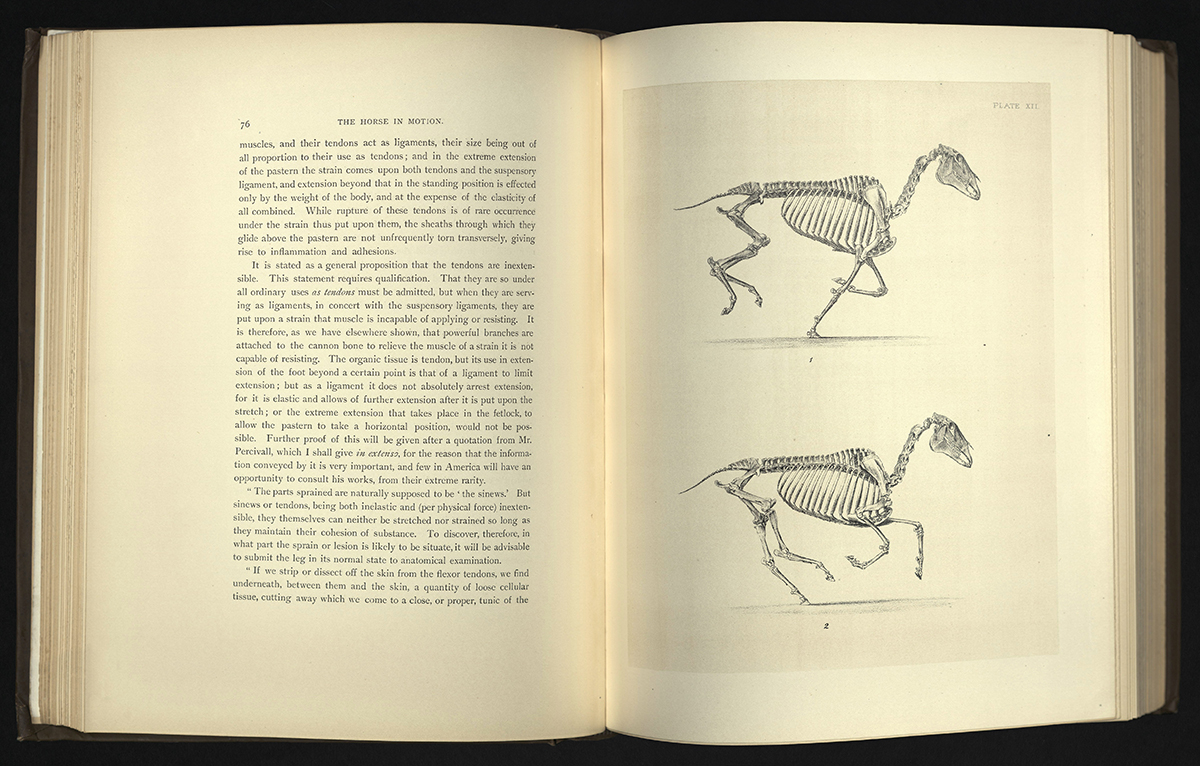 The experiment was nothing short of an engineering triumph. Muybridge’s custom-made camera shutters produced a sequence of photographs in which the legs of a trotting or galloping horse could be captured in focus, rather than recorded as blurs. The shutters were controlled by trip wires triggered by the horses legs. The photographs were taken in succession 1/25 of a second apart, with shutter speeds calculated to be less than 1/2000 s. In addition, the photographs were also a triumph in chemistry, as Muybridge had figured out how to make film “fast” enough to capture a moment so brief. The series became the first example of chronophotography and an important step in the development of motion pictures. “He is the man who split the second, as dramatic and as far reaching an action as the splitting of an atom.”

Like a modern day movie set, Muybridge’s studies in motion was a collaborative project. It included grooms and trainers for the horses, along with assistants that helped with the cameras and engineering. Today we might call these gaffers and grips. In that respect, the horses, riders, and other animals in front of the cameras were the actors. Muybridge, meanwhile, made all of the technical and aesthetic decisions, as a director does. Stanford, of course, functioned as the producer. He oversaw the project and pushed the funds, all the while taking great interest in the experiments. At times, Stanford could even be found at the stables watching the photographs take place. Agreements regarding financial compensation were vague, and Muybridge was said to have preferred notoriety over money. When the results were presented to the public in a staged demonstration, fame arrived and local newspapers were all at once filled with stories of Muybridge’s magic. 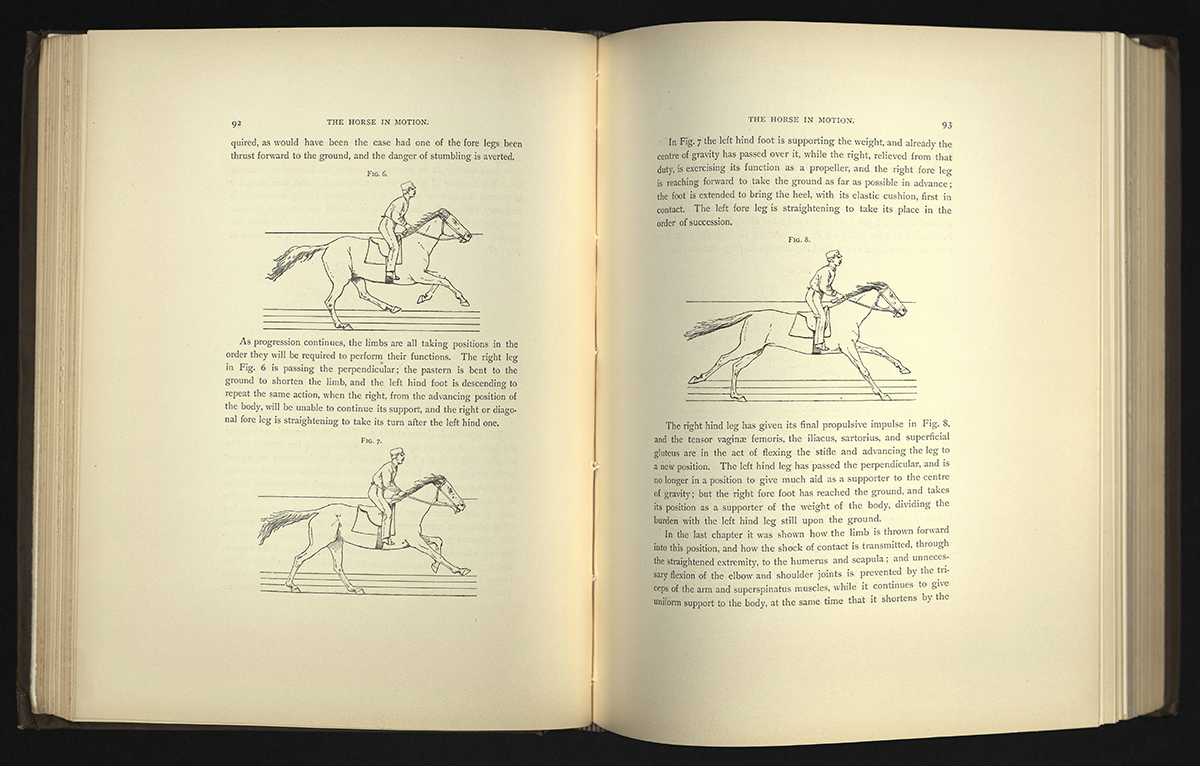 But who was to take credit and responsibility for the motion studies? Stanford had supplied the racehorses, trainers, work space, technical resources, encouragement, not to mention a generous amount of money. He was also the one who initiated the project when he first approached Muybridge in 1872. On the other hand, Stanford was never really interested in the broader implications and impacts of the photographs, beyond what they revealed about equine motion. He was, after all, a racehorse connoisseur. It was very clear, however, that Muybridge had been the one guiding, organizing and, most importantly, producing the results. So when Stanford enlisted his friend and physician, Jacob Davis Babcock Stillman (J. D. B. for short), to help create a book drawn from the project, Muybridge was less than thrilled.

The last thing Eadweard Muybridge ever photographed for Leland Stanford was a solar eclipse on January 11, 1880. Despite his reservations, Muybridge did eventually contribute an introduction for the book Stanford and Stillman were working on. Stillman had suggested it be edited down from thirty-five to just two pages. In the end it was never used at all. Muybridge had a sense he was being overthrown and in an attempt to defend his authorship and copyright, he created several handmade albums containing more than 200 hundred motion studies, which he titled The Attitudes of Animals in Motion. A Series illustrating the Consecutive Positions Assumed by Animals in Performing Various Movements executed at Palo Alto, California, in 1878 and 1879. The signed copy Muybridge gave to Stanford was dated May 15, 1881. 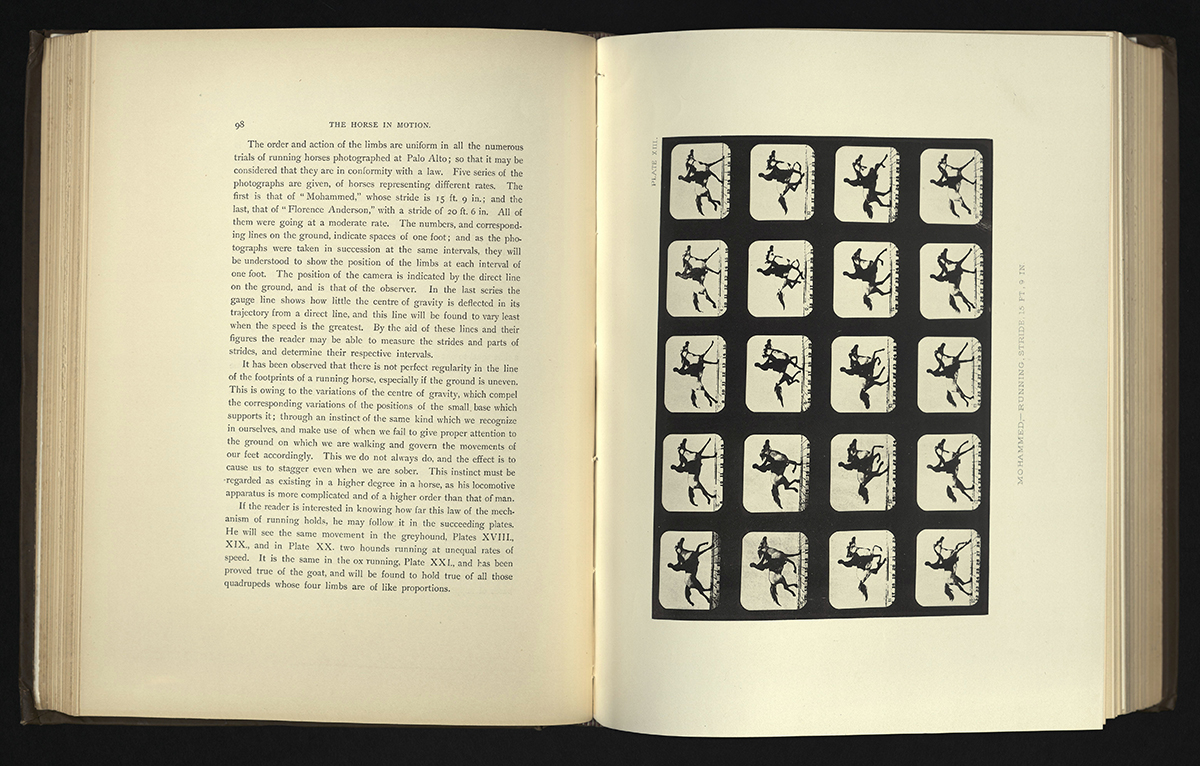 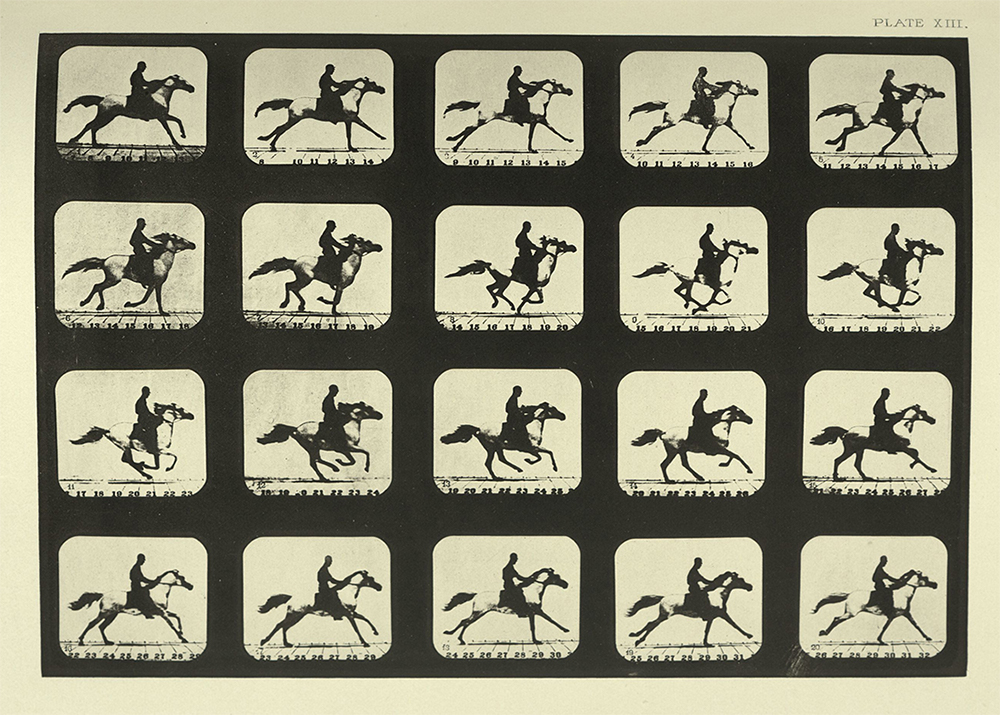 Stanford and Stillman’s work, The Horse in Motion, was published in 1882. The expensive enterprise, with its gilded and embossed cover, claimed to feature instantaneous photography, but instead simply featured one hundred illustrations that were based on Muybridge’s photographs. Muybridge, however, was not given much credit, other than a brief mention in Stanford’s introduction, referring to Muybridge as “very skillful photographer” employed to carry out his theories of equine motion. The motion studies depicting men and women were entirely ignored.

Muybridge’s credibility was further scrutinized when the British Royal Society of Arts — perceived as the most distinguished scientific institution at the time —  decided to withdraw their invitation of funding future motion studies. Three days before Muybridge was set to present to the public he was, instead, called into the office of the Council Chamber and asked if he knew anything about the book, Horse in Motion. Accusations of plagiarism arose, and since he could provide no real proof to support his assertions, the Royal Society decided to shut their doors and their wallets on Muybridge. Devastated, Muybridge brought a suit against Stanford in 1882, asking for damages to the extent of $50,000; but the lawsuit cost Muybridge more money than he could afford. Eventually it was dismissed out of court. Meanwhile, The Horse in Motion did poorly in both the United States and the United Kingdom. Stanford didn’t mind, however. He had been more interested in the glory of “winning” the case than he was in the sales of his book. 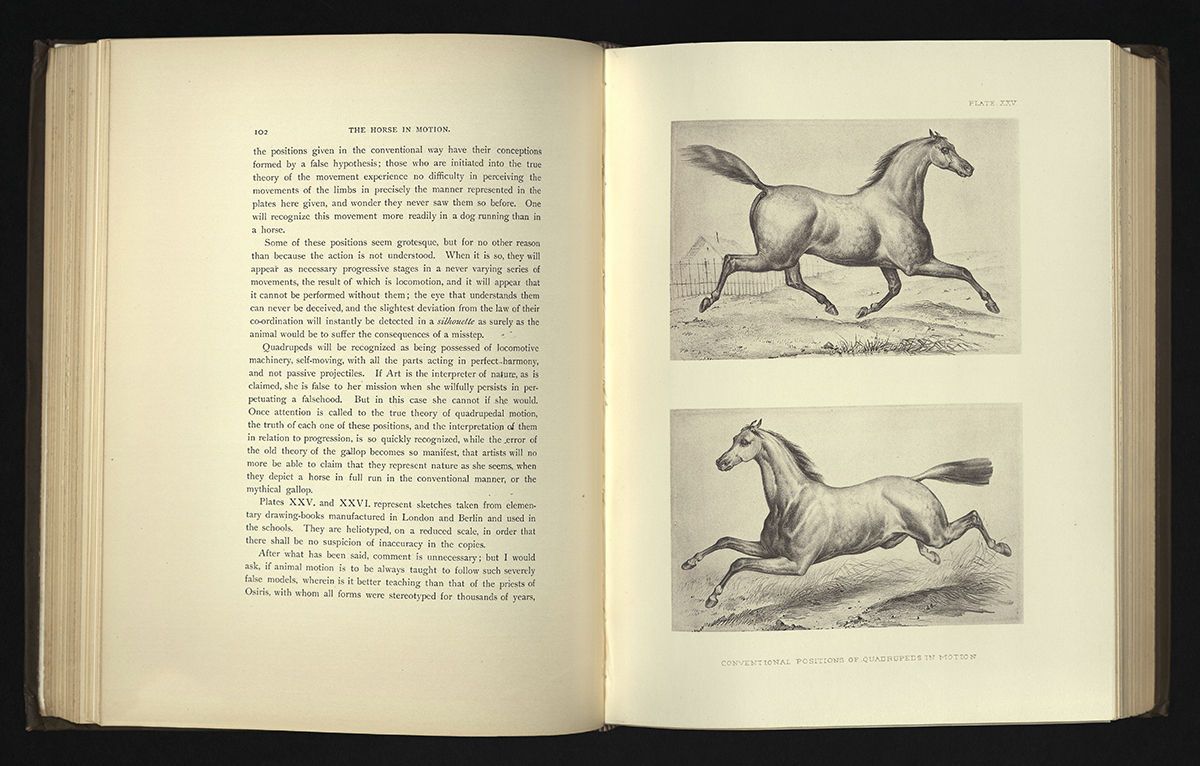 During the eight years Muybridge spent in California working on his motion study experiments he became a father, a murderer, and a widower. He also invented a clock, patented two photographic innovations, and achieved international fame as an artists and scientist. With his zoopraxiscope, he projected his photographs on a screen and became renowned as the “Father of the Motion Picture.”

“His trajectory rippled through all the central stories of his time — the relationship to the natural world, and the industrialization of the human world, the Indian wars, the new technologies and their impact on perception and consciousness.” 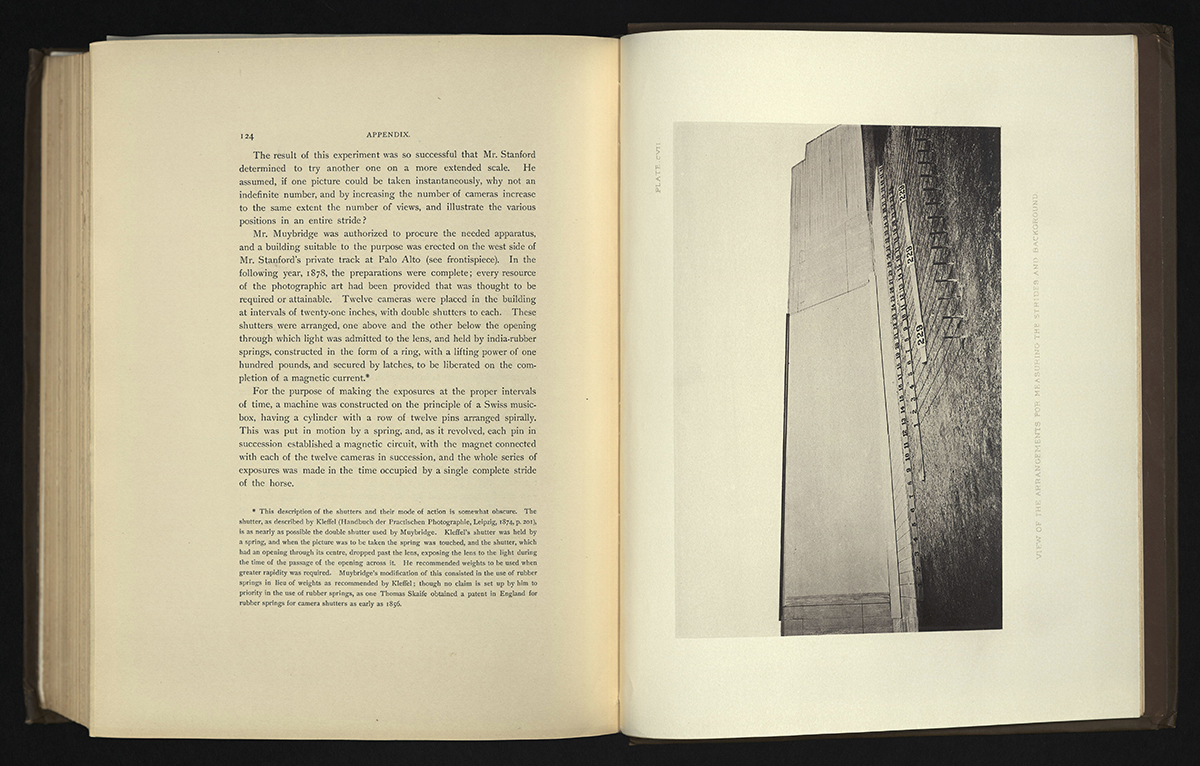 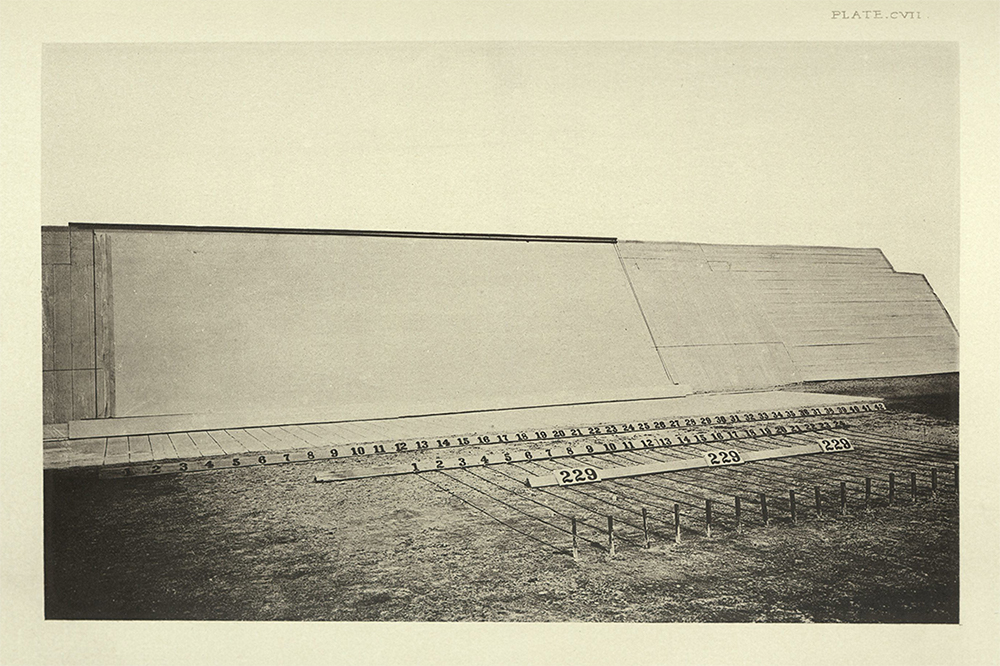 “View of the arrangements for measuring the strides and background.”