26 Jul Book of the Week — The Tarot Pack: Its Mystery and Fascination 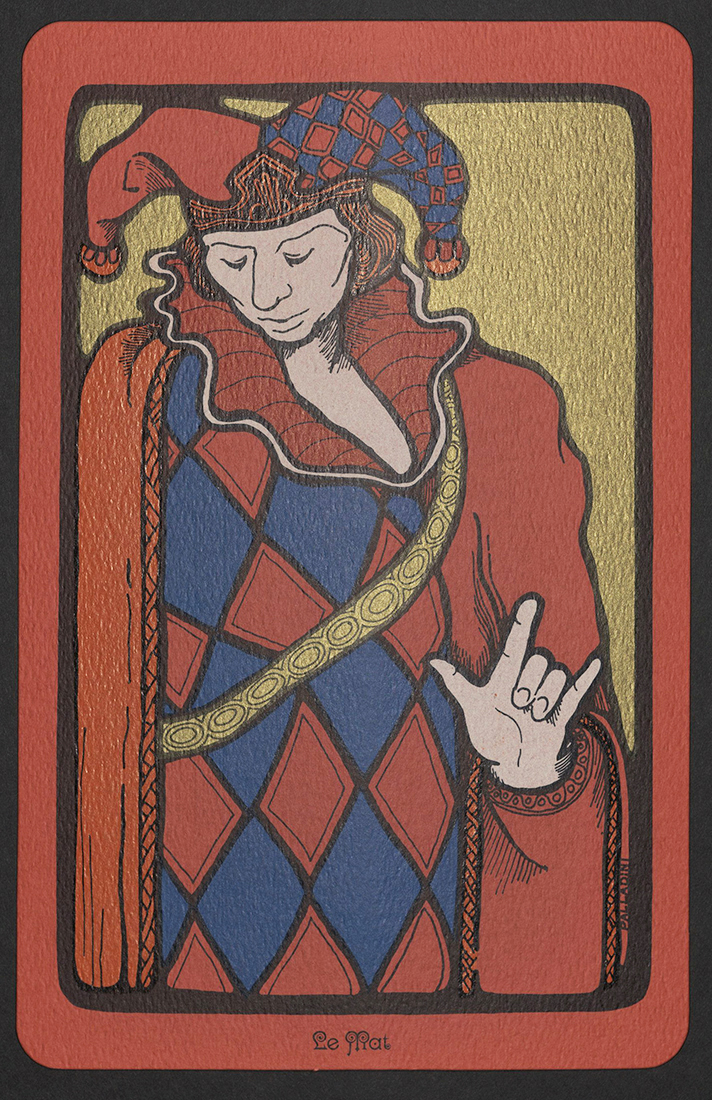 Le Mat (The Fool)
The flesh, the sensitive life, the spirit in search of experience — and atonement. A young man, breathing and savoring the freshness of the morning of life. The “dreamer” that is a part of every creative person.

It is not certain where, exactly, the first deck of cards appeared. Or why. Many scholars trace playing cards to the Tang Dynasty in China during the 9th century AD, in the form of a “leaf game.” Others suggest that Egypt could have been the birthplace of cards, with its origins and use inspired by ancient Egyptian theology. Over the course of centuries, the style and meaning of playing cards has expanded to a wide variety of uses — from custom-produced cards for casinos and magicians, to promotional items, souvenirs, educational tools, collectors items, and even art. 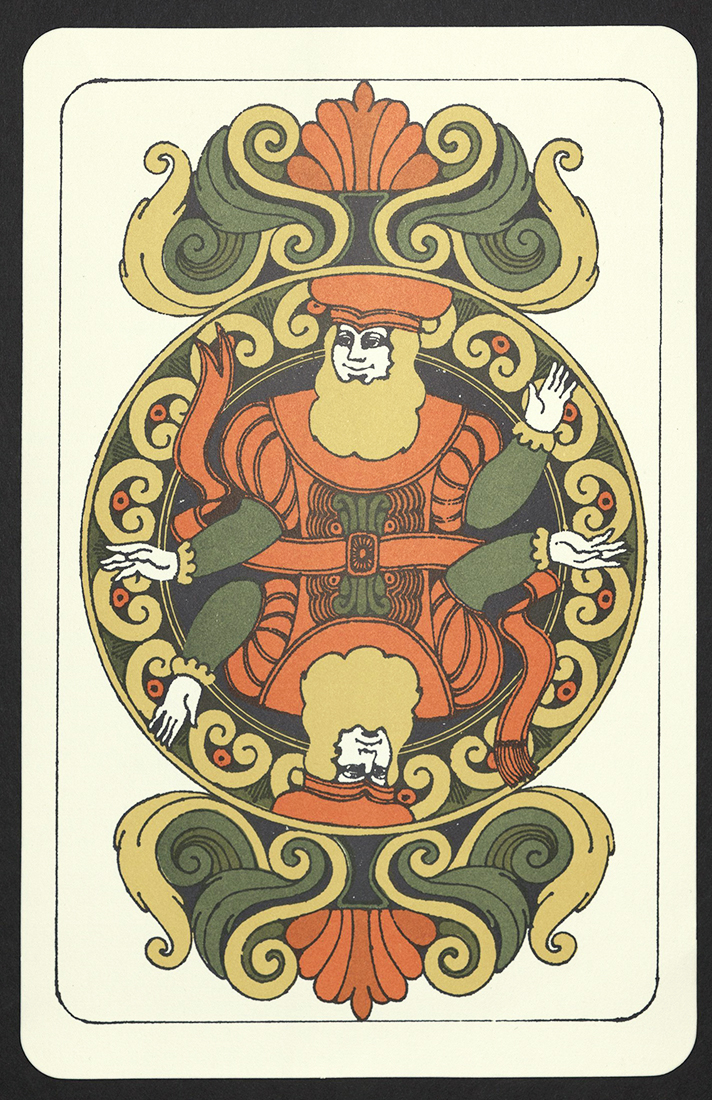 L’As de Denier (The Ace of Pence)
This is the forerunner of the Ace of Diamonds, and it is considered by some to be the most favourable of all Tarot cards. It brings happiness, perfect content, ecstasy; good intelligence; riches.

It did not take long for playing cards to make their way from the East to Europe. By the fourteenth century, playing cards were being referenced in handwritten decrees, prohibitions, treatises, letters, and poems. The earliest graphic representation of a card game can be found inside the Borromeo Palace in Milan, where a 15th-century fresco features five people sitting around a table holding hands made of cards. Looking closely, the cards they are holding up are unique. Rather than the common 52-card pack we are familiar with today, the cards held by these medieval players are tarot cards. 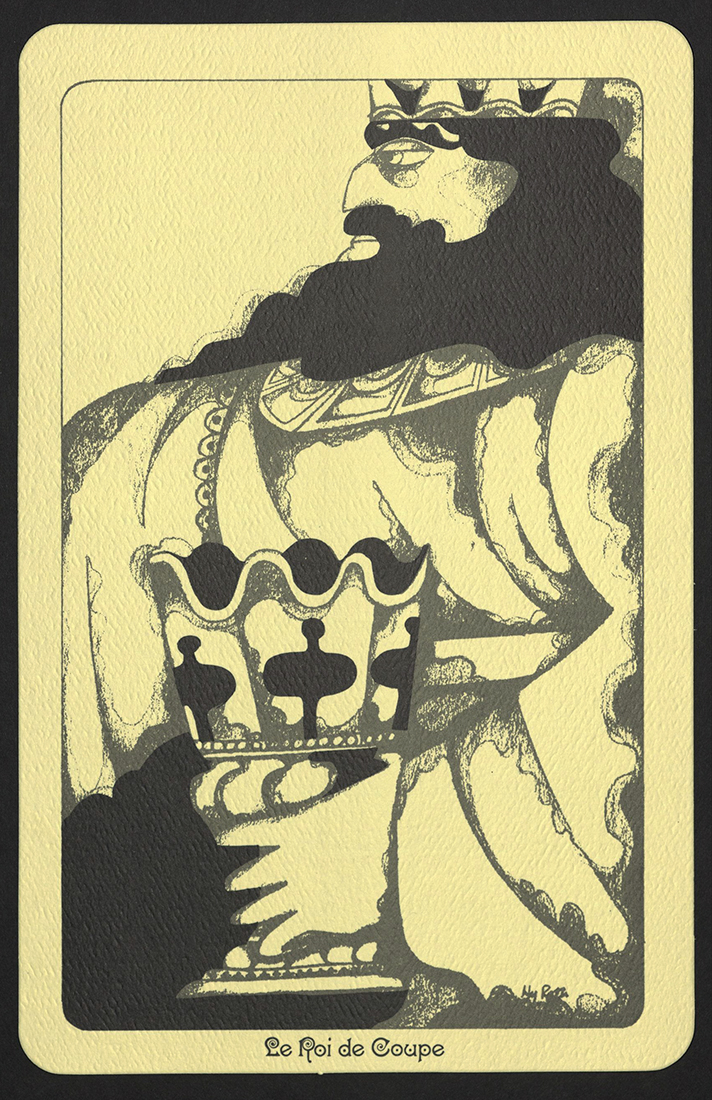 The origin of tarot cards, or tarocchi, dates to about the mid-fifteenth century and is often closely associated with the Visconti-Sforza of Milan, noble Italian families who rose to power in the Middle Ages and ruled from 1277 to 1447. The tarocchi packs designed for the Visconti-Sforza families are the oldest extant tarocchi cards, with eleven incomplete versions of these cards existing in collections and museums all over the world. The most complete pack can be found at the Morgan Library and Museum in New York. Italian painters Bonifacio Bembo and Andrea Mantegna are said to have designed and painted some of these packs. 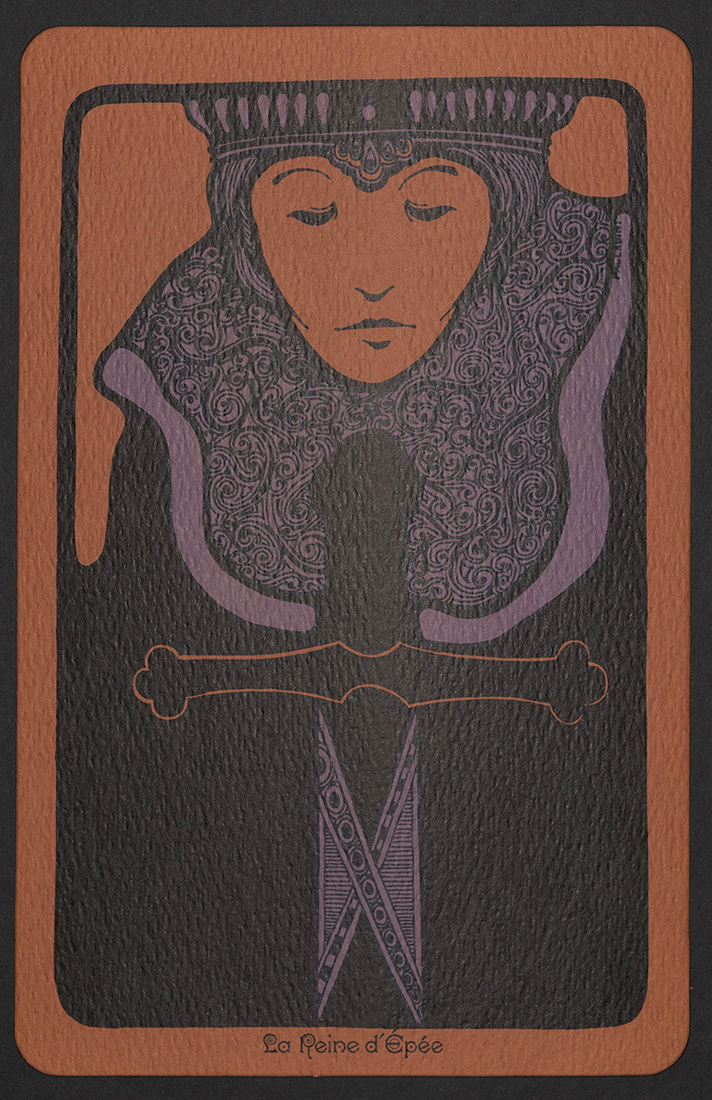 The term trionfi (Italian for “cards”) was used to describe the twenty-two Major Arcana cards found in the deck, while tarocchi came into usage later to refer to the complete seventy-eight-card pack — which consists of 26 Major Arcana cards and 56 Minor Arcana, or suit cards. The Major Arcana are thought to depict and create the continuous and ever-changing spiritual forces affecting humanity. To some, they are the pictorial representation of life’s fateful events. 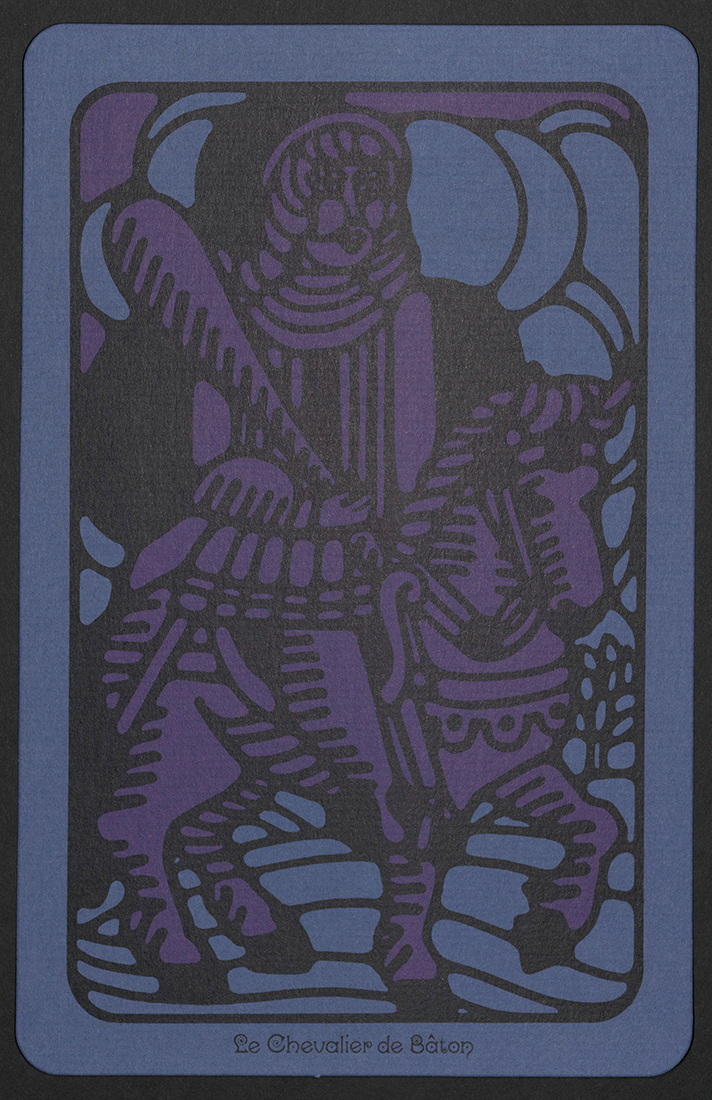 Le Chevalier de Bâton (The Knight of Wands)
The Knight is a card of movement, change and departure. It may mean absence, flight, change of residence. Also, a younger man with black hair and blue eyes, honest, friendly. In some readings this may be a bad card, signifying alienation.

The Minor Arcana are divided into four suits, with each suit containing fourteen cards. The suits have changed and evolved over time to include depictions of stars, moons, arrows, animals, mirrors, anchors, and more. However, the most prevalent and popular suit signs we see today include representations of swords, wands, cups, circles, or some variation thereof. A popular theory supposes that the four suits were meant to represent the four divisions of the populace in Medieval Europe. The swords representing knights, nobility, and aristocracy; wands for peasants and lower classes; cups for the clergy and other ecclesiastical groups; and the circles (or coins) for the commercial and merchant classes.

By contrast, the four suits could also be considered to be more symbolic. Some view them as emblems of the four virtues: justice, fortitude, faith, and charity. While others understand them as the four seasons of the year, the four elements of nature, or the four cardinal directions. Theories of the tarot’s origins are nearly limitless, but no summary would be complete without mentioning the tarot’s French occult revival, which spread throughout the West in the nineteenth century and did more than anything else to create widespread interest in the magical tarot. 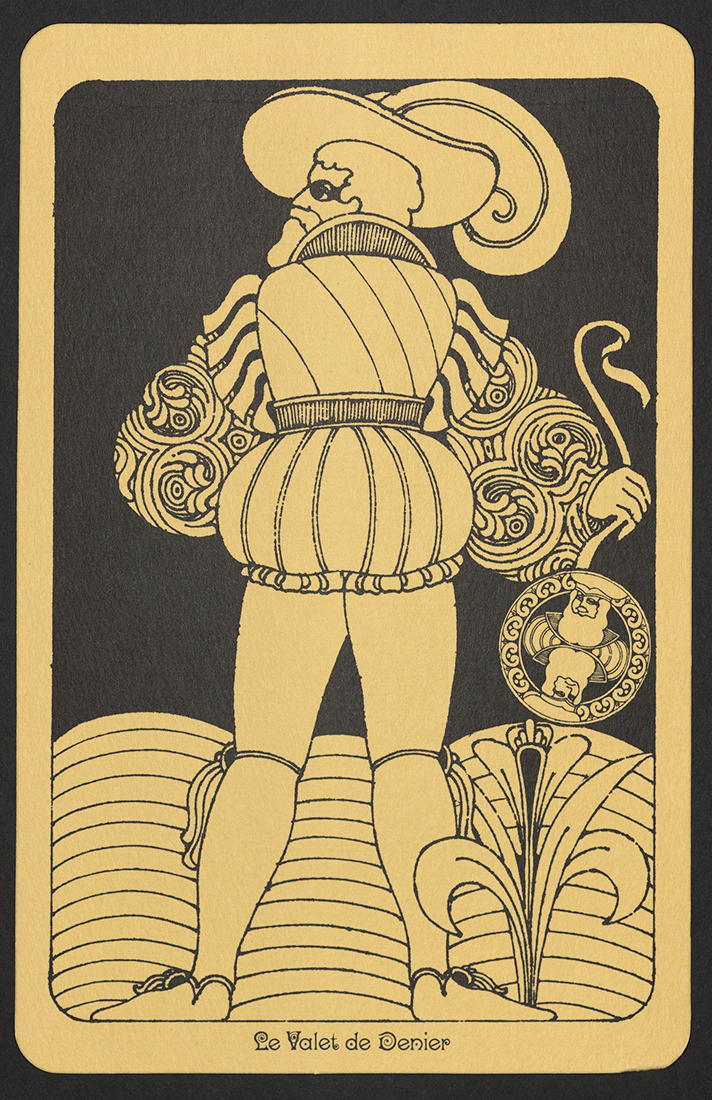 Le Valet de Denier (The Page of Pence)
A brown-haired youth, a soldier; a child; study, scholarship. Also, news and the bearer of messages.

Tarocchi spread to France as early as the beginning of the sixteenth century. From there, we get the word tarot — the French derivative of tarocchi. In a chapter included in his book, Le monde primitif (1781), the French Protestant pastor, Antoine Court de Gébelin, wrote about the tarot. He claimed (without any proof) that Egyptian priests referenced the ancient Book of Thoth to create the images in their own tarot packs. His treatise also suggested that there was a mystical and spiritual connection between the twenty-one trump cards and “The Fool” and the twenty-two letters of the Hebrew alphabet — all of which inspired the practice of cartomancy, the term used to describe fortune-telling and divination using a deck of cards. 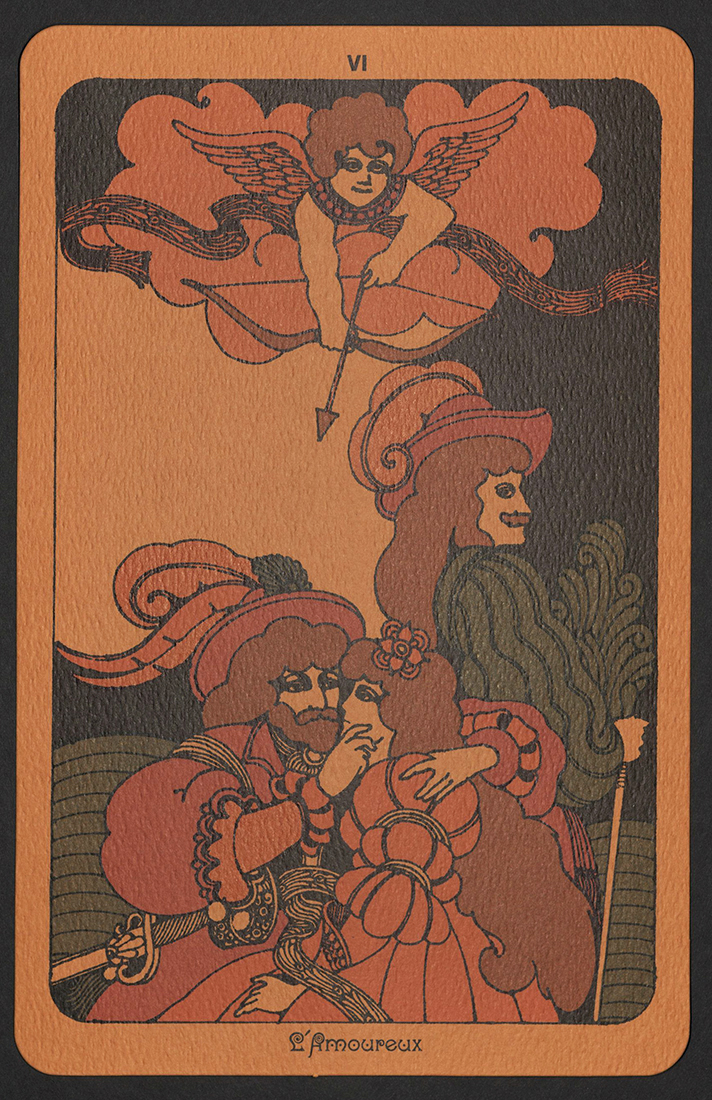 L’Amoureux (The Lover)
This is the card of love and passion, of attraction and beauty, of trials overcome, and the artist wedded to his art.

A couple of years after the publication of Le monde primitif, a Parisian wigmaker named Jean-Baptiste Alliette responded to Court de Gébelin with his own book, titled, How to Entertain Yourself With the Deck of Cards Called Tarot (1785). Alliette, who went by the pseudonym Etteilla (the reverse of his surname) was the first to describe methods of divination specifically using the tarot pack. Etteilla also claimed that he had mastered the art of cartomancy in 1751 — that is, thirty years before the publication of Court de Gébelin’s work. In his prime, Etteilla drove a thriving trade in telling fortunes, charging 24 livres for “drawing the cards.” 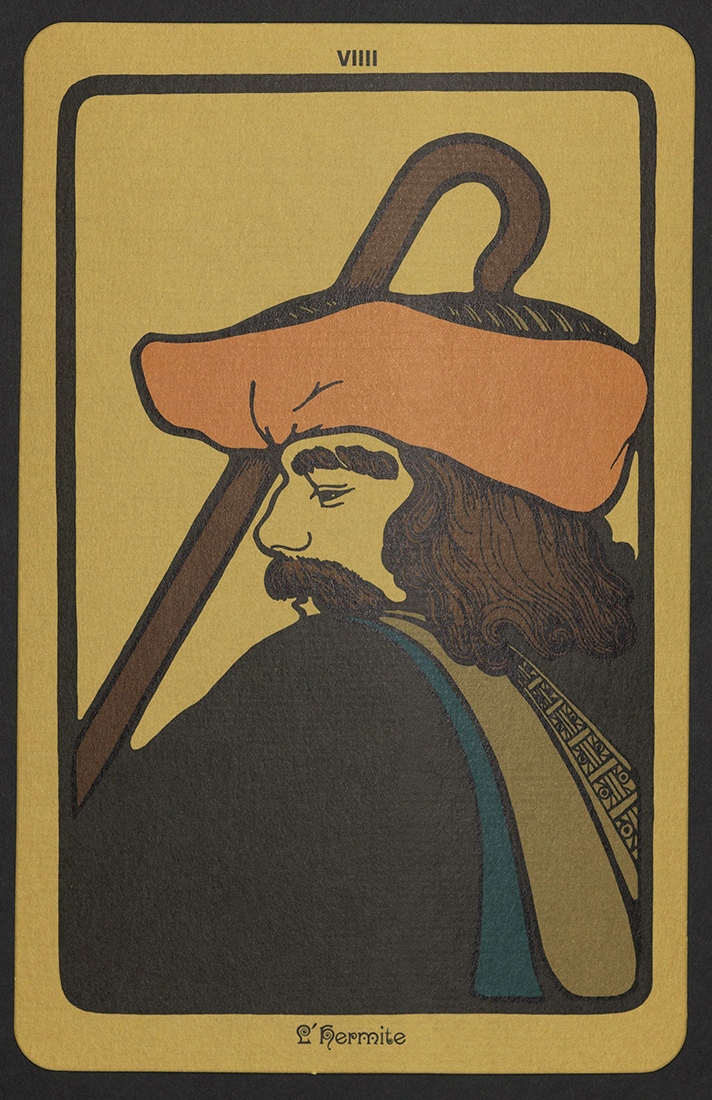 L’hermite (The Hermit)
Prudence, caution, car. This is a card of attainment for those who seek the heights. But watch out for treason, double-dealing, and corruption.

The tarot pack arrived in North America in the late nineteenth century. Its Italian roots were now obscured, and in its place was a mystical aura of the occult. Within a decade, every major tarot deck and tradition had migrated to the United States, including Falconnier and Wegener’s Egyptian design deck; Oswald Wirth’s deck based on Elphas Levi’s descriptions; the Rider Waite Smith deck; and Aleister Crowley’s “Thoth” deck; and by the mid-twentieth century, writer and actress Eden Gray had introduced the tarot pack to a growing counterculture movement with her book, Tarot Revealed (1950). 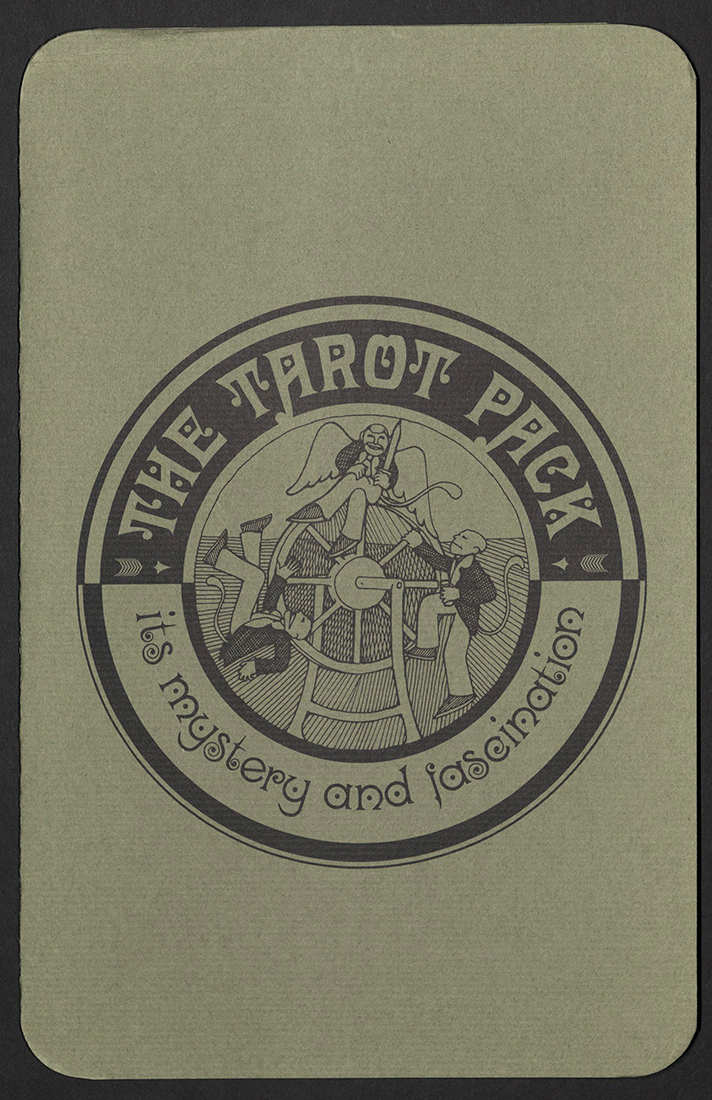 The tarot pack we see here was produced by the Brown Company, a leading pulp and papermaking company in the twentieth century based in Berlin, New Hampshire. Before shutting its doors in the 1980s, the Brown Company had incorporated the American Writing Paper Company, which owned more than a dozen paper mills in Holyoke, Massachusetts. At its peak, American Writing Paper produced approximately seventy-five percent of all the fine papers made in the United States, while the city of Holyoke, Massachusetts — once dubbed “Paper City” — was considered to be a major supplier of fine writing papers for the world.

The Brown Company had no background in fortune-telling or cartomancy. However, it saw the structure and form of the tarot pack as an innovative way to provide paper samplers for its Linweave line, and showcase lithographed illustrations from many artists on fine paper. This 1967 paper sampler includes forty-two cards that come in vibrant colors and a variety of textures. In addition, a set of instructions for a unique and simplified method of divination known as “The Linweave Nine-Card Oracle” is included. The manual claims that, “with a little practice, you can become a BMAP (Big Man at Parties) and your mother will start referring to you as ‘My son the prophet.’”