“On mesa and valley floor and treeless loma, the mantle of vivid green is overlaid riotously with color — the orange of California poppies; the blue and lavender of sturdy lupines and lolling wild heliotrope; the mauve of owl’s clover; the pale gold of sun-cups — trickles and rivulets and broad rivers of color. Down from the foothills of the purple Coast Range, it leaps and streams, gathers now into pools and lakes, now breaking in cascades and ribbons over the brink of the arroyos and barrancas, to reappear on the hither side and spread illimitably in kaleidoscopic flood, until it is halted at last by the barrier of the sea.” 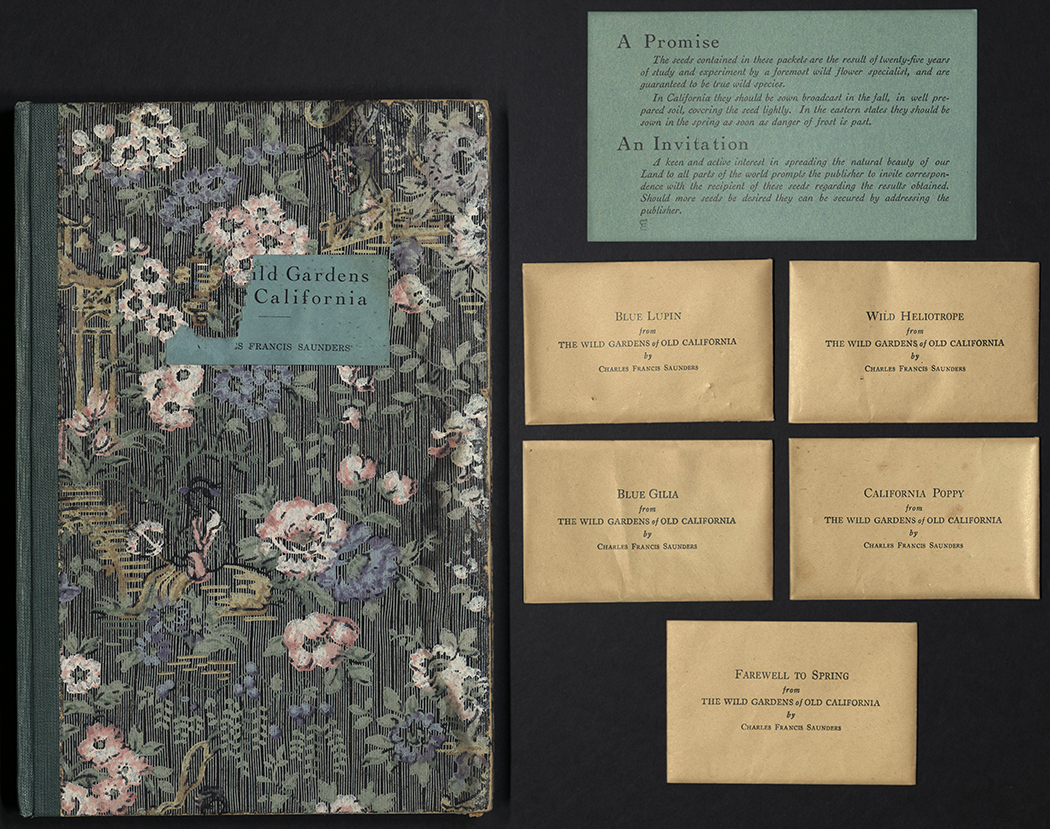 Charles Francis Saunders was at his best when writing about flowers. Although he was not always a botanist, his love of writing began early in life. Saunders was born in Warminster, Bucks County, Pennsylvania in 1859 and was educated in schools throughout Philadelphia. His early career found him working in an import-export firm until one evening, on the way home from the office, he spotted a flyer about public lectures on botany presented by Dr. Joseph T. Rothrock at the local Y.M.C.A. “Something within me seemed to say, ‘Go,’ and I went,” Saunders later recalled. At the age of thirty-three, many might have thought he was too old for a career change. However, after several years of intense study and field work — done at night, on weekends, and during holidays — Saunders became one of the most prominent botany students in the East. 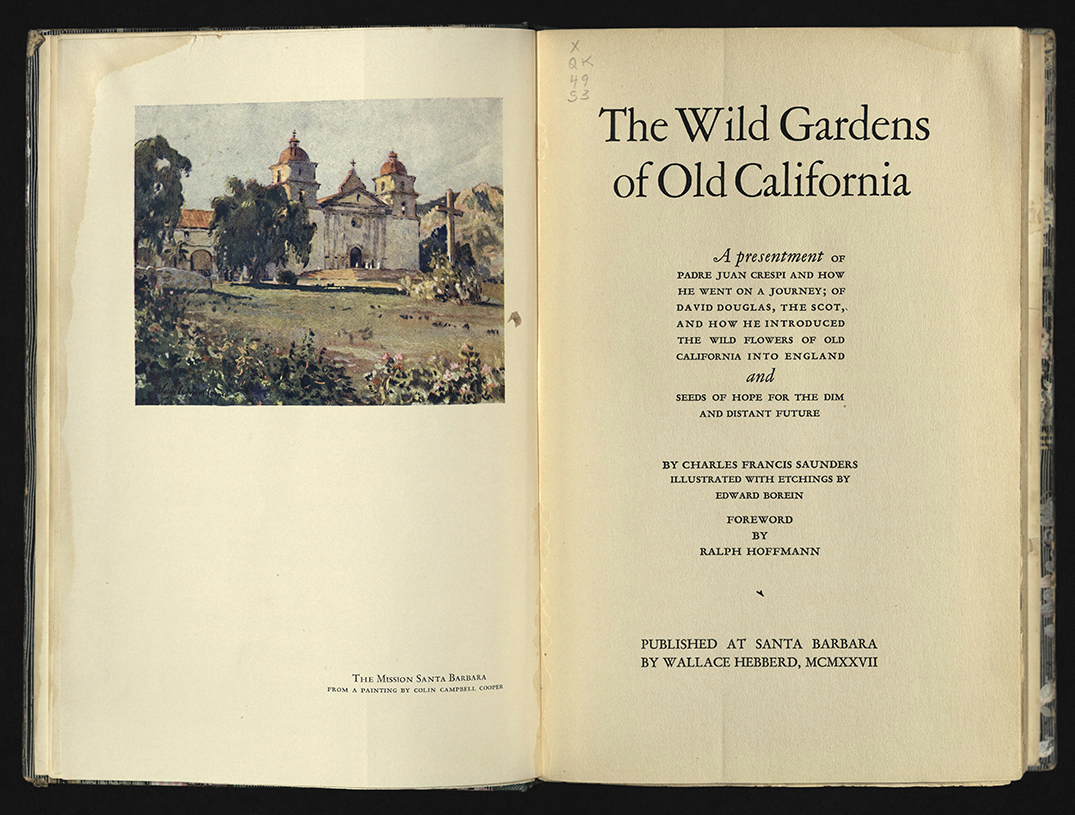 Accompanied by his desire to write was a desire to share what he was learning. In 1888, Saunders formed a “walking club” with two fellow Quakers: Henry Troth, a photographer, and Elisabeth Moore Hallowell, an amateur botanist and an accomplished artist. Saunders wrote with gentle lyricism about his country walks, and also about the plants he observed. Some of his earliest essays appeared in the Philadelphia Record and the Churchman. Saunders also contributed more scientific research to several botanical journals. Saunders would later marry his walking partner, Hallowell. Together they would venture west to California and become completely captivated by the fascinating flora of the Southwest — the abundant wildflowers and the unique desert plants — most of which they were totally unfamiliar with in the East. During their initial stay of nearly one year, the couple explored California from the Bay Area to Palm Springs and across to Catalina island. Saunders and his wife would return to California several times before finally settling in Pasadena. They would go on to collaborate on two small books, he as author and she as artist. 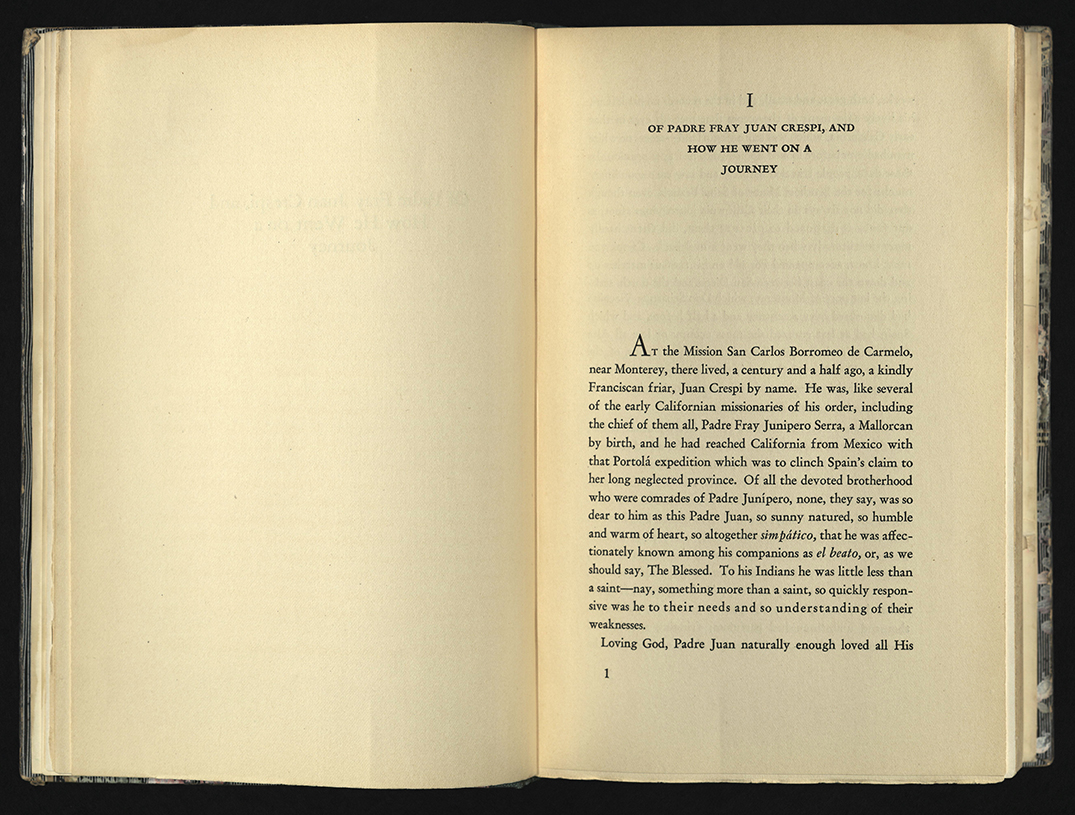 In a Poppy Garden, a slight volume of poetry enhanced by Elisabeth’s illustrations, was published in 1903. Two years later, they released California Wildflowers (1905), a portfolio featuring six watercolor flower drawings. In 1908, the pair roamed for several months among the Pueblo Indian ruins and the surviving peoples in Arizona and New Mexico. Their travels resulted in a collection of illustrations, photographs, and writings titled The Indians of the Terraced Houses (1912) — Saunders first major work. An appreciated account of the Pueblo’s way of life, the novel was praised by President Theodore Roosevelt, despite its attack on the “well-intentioned but misdirected governmental interference” with that way of life. The following year, Saunders published his fifth book, Under the Sky in California (1913), a descriptive guide to outdoor travel in the state. The narrative was compiled during Saunders’ first trip out west, wherein he and his wife, accompanied by artist Carl Eytel, explored the arid landscape and its strange flora. 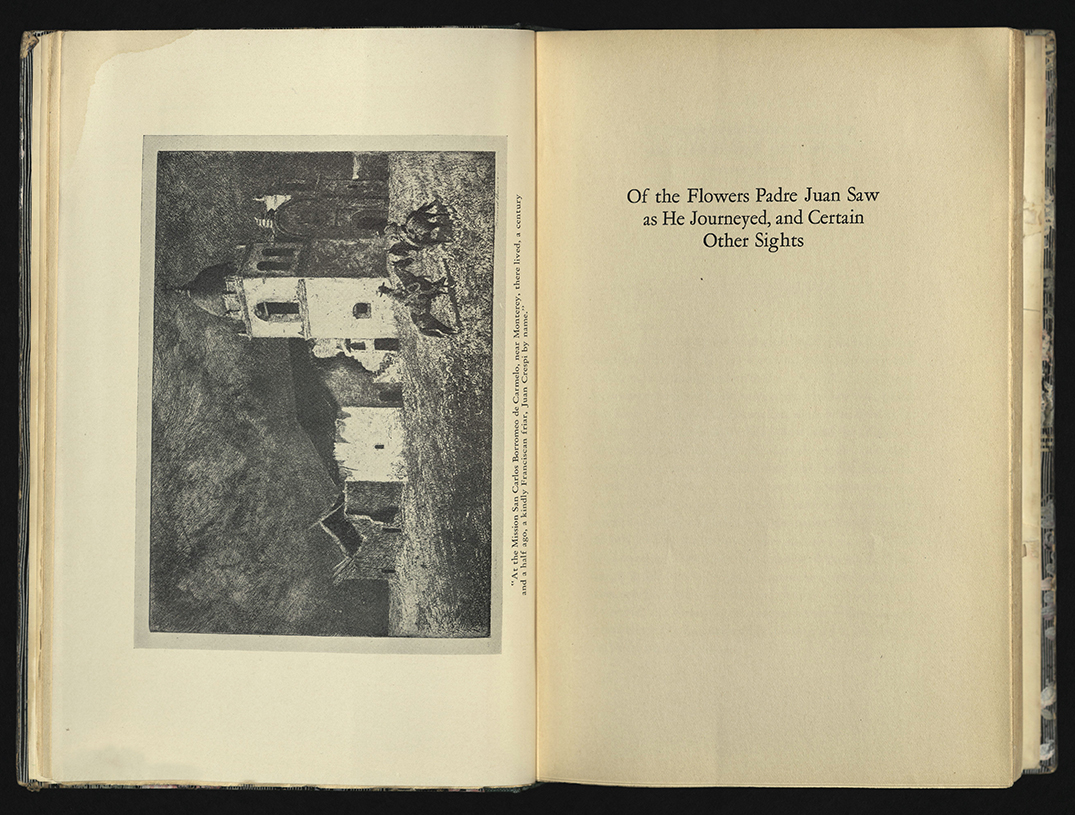 Saunders would continue to prolifically write and publish throughout the early twentieth century, focusing on three main areas of interest: Southwest indigenous cultures, the Spanish Missions of California, and — most predominantly — the flora of the coast, mountains, and desert. His bibliography includes three books about the Spanish Missions: California Padres and their Missions (1915), A Little Book of Missions (1925), and Capistrano Nights (1930); four guide books: Finding the Worthwhile in California (1916), Western Wildflower Guide (1917), Finding the Worthwhile in the South West (1918), and Useful Wild Plants of the United States and Canada (1920); and several plant books: With the Flowers and Trees in California (1914), The Story of Carmelita (1928), Trees and Shrubs of California Gardens (1926); and Western Wildflowers and their Stories (1933). In the latter, he emphasized that he did not write for scholars, but assembled facts “likely to be of interest to the general plant lover and particularly to that class which loves them for their aesthetic grace and human associations, rather than for their anatomical make-up and workings.” 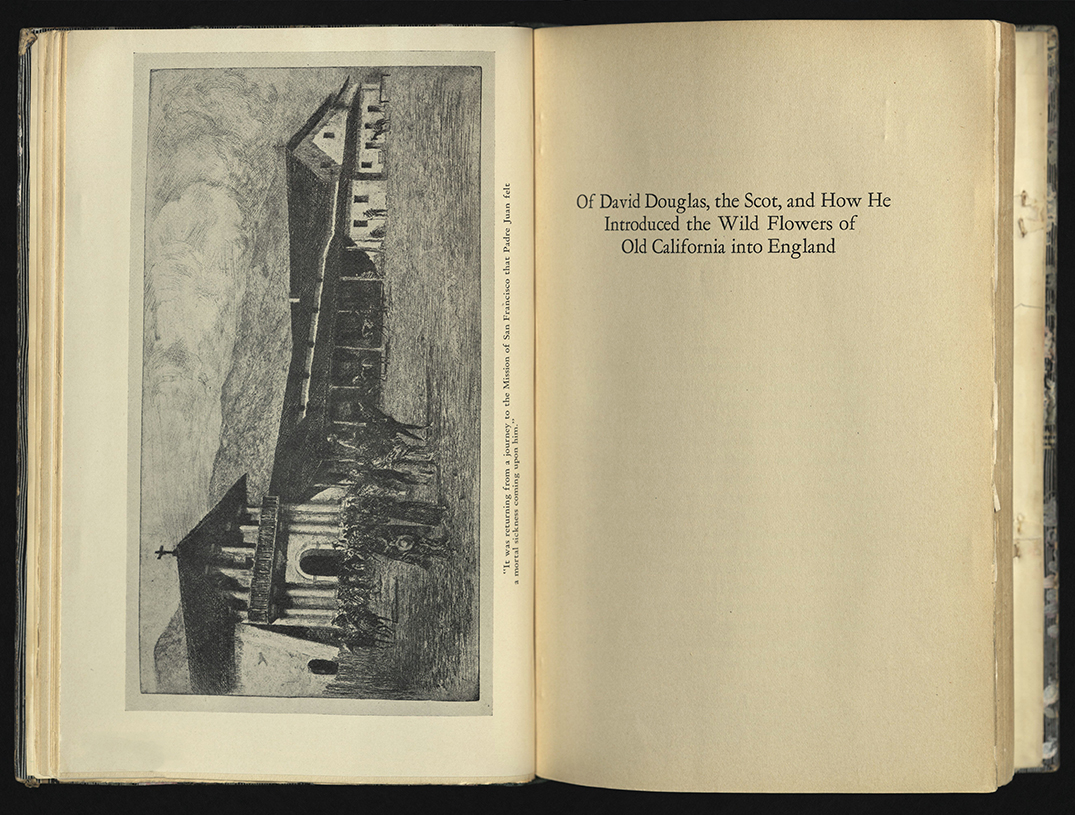 Among Saunders’ many plant books is The Wild Gardens of California (1927) a tribute to both Father Juan Crespí and the Scottish botanist, David Douglas. The book was illustrated by Santa Barbara artist Ed Borein and includes an introduction by Ralph Hoffman, an American natural history teacher, ornithologist, botanist, and author of the first true bird field guide. The book also includes a surprise in its back pages: six packets of wildflower seed obtained from naturalist nurseryman Theodore Payne. Wild Gardens takes its readers to the California of the eighteenth century and introduces Padre Juan Crespí, who accompanied the first expedition of El Camino Real, a six hundred mile route connecting twenty-one early Spanish Missions in California, along with a number of sub-missions, four presidios, and three pueblos. The original route of the Royal Road — or the King’s Highway, as it is often called — begins in Baja California, Mexico at the site of Misión de Nuestra Señora de Loreto Conchó (present day Loreto) and continues north along the coastline (today’s California State Route 1) until it ends at Mission San Francisco Solano.

A native of Majorca, Juan Crespí entered the Franciscan order at the age of seventeen. He arrived to New Spain in 1749 before joining the expedition led by Gaspar de Portolá and Junípero Serra twenty years later. In order to better facilitate overland travel, mission settlements were established approximately thirty miles apart, so that they were separated by only one long day’s ride on horseback. Some have suggested that the Franciscan padres specifically planted mustard seeds along the trail to create a golden road of bright yellow flowers stretching from San Diego to Sonoma. But in truth the invasive plant was likely grown in gardens before spreading across the central coast. All told, the Portolá Expedition traveled in the future state of California through the present-day coastal counties of San Diego, Orange, Los Angeles, Ventura, Santa Barbara, San Luis Obispo, Monterey, Santa Cruz, San Mateo, and San Francisco. Because Crespí was the only one of the Franciscans to make the entire journey by land, he became the first official diarist for the missions. His diaries, first published in H. E. Bolton’s Fray Juan Crespí  (1927) provided valuable records of these expeditions. He was one of three to document the first exploration by Europeans of interior areas of Alta California. 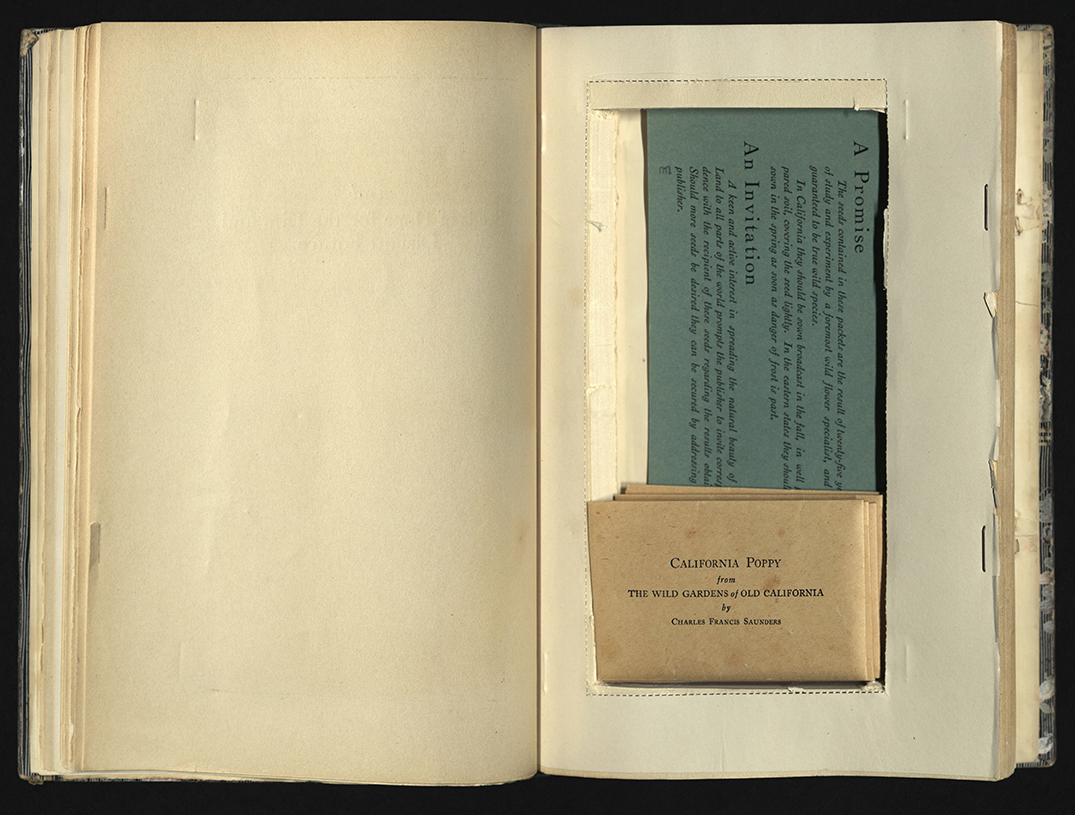 “But while there are seeds there is hope; land is still plentiful enough for a bit of garden with every house;
and all who will may yet have at their own doors a little Wild Garden of California.”

Charles Francis Saunders died on May 1, 1941. One of the last things he did that day was identify some plants for a neighbor. In an obituary published in The Friend, Edward Hicks Parry paid tribute to the Quaker spirit permeating the books written by Saunders. “They neither refer to our principles nor have a religious design, but they manifest the qualities that are fundamentally Friendly: a calm, quiet strength, integrity, tolerance, moderation, and cheerful kindliness and simplicity, the love of nature and healing silences, and a simple impregnable faith. In a word, his books breathe the Friendly spirit.” Charles Saunders second wife, Mira Barrett Culin, presented her husband’s botanical library, manuscripts and notes to the Santa Barbara Botanic Garden, his Indian baskets, pottery, and rug collection to the Southwest Museum, and his remaining papers, photographs, and notebooks, along with her own, to the Huntington Library.