06 May Book of the Week — Un Viaje en Zeppelin

“It’s a terrific crash, ladies and gentlemen.
The smoke and the flames now and the frame is crashing to the ground, not quite to the mooring mast.
Oh, the humanity…”

On October 11, 1928 the Graf Zeppelin, the world’s first commercial intercontinental aircraft, gently rose into the sky above the city of Friedrichshafen, Germany to begin its brief journey across the Atlantic to the United States — a milestone in the history of commercial travel that ensured the continents would never again be weeks apart. Though Graf Zeppelin signified the Golden Age of airships, the craft’s origins can be traced as far back as 1874, when Count Ferdinand von Zeppelin began to take serious interest in the development of air travel. It would not be until 1900, however, that Count Zeppelin’s first airship would take its maiden flight and succeed. By 1909, the Deutsche Luftschiffahrts-Aktiengesellschaft (German Airship Company) or DELAG was founded. Since DELAG carried paying passengers on short trips across Germany, it is considered to be the world’s first commercial airline.

In addition to commercial use, Zeppelins were also heavily relied upon in the military. During World War I, all Zeppelins were given over to the German Army and Navy. Over eighty-five Zeppelins were built and used for observation and scouting purposes, as well as for bombing raids and propaganda distribution. Although Count Zeppelin died in 1917, the Zeppelin Company continued on after the war under the leadership of Dr. Hugo Eckener. Having gained considerable and valuable experience from the construction of military airships, the Zeppelin Company once again entered the field of commercial aviation. 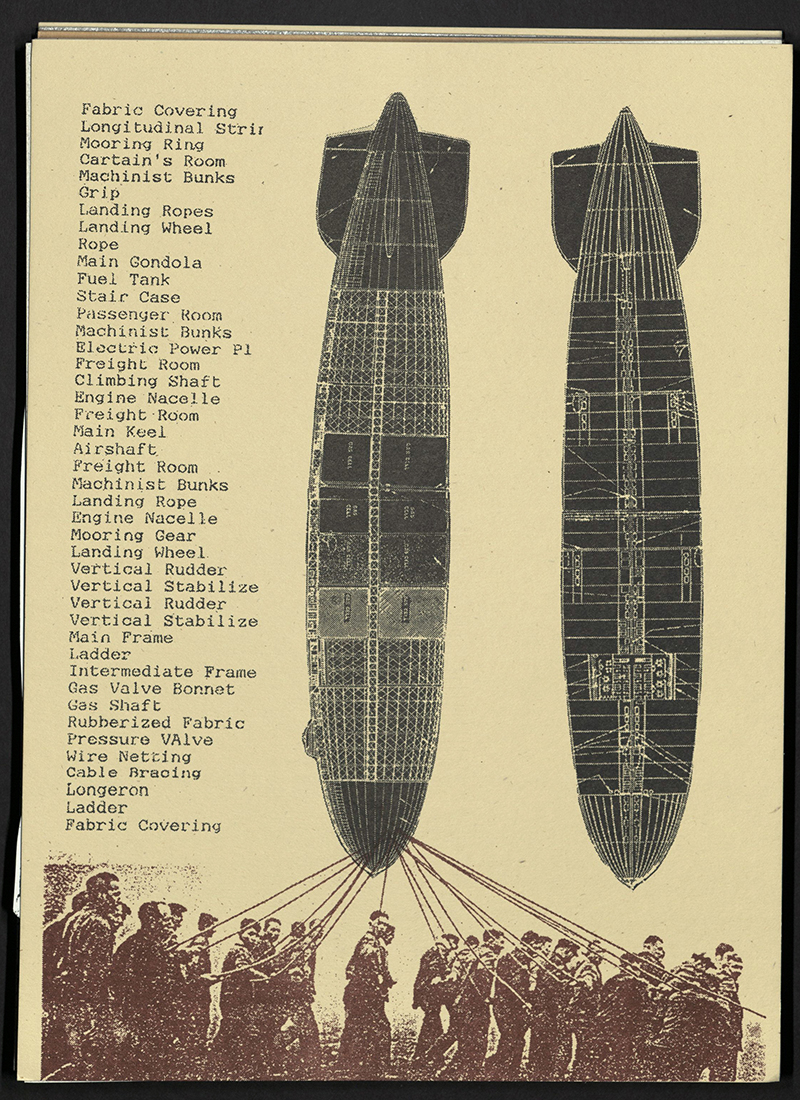 A Zeppelin is a rigid airship consisting of a metal frame covered with a cloth material and supported by internal cells filled with a buoyant gas, such as helium or hydrogen. As you may have already guessed, the word is derived from the name of the German airship pioneer and manufacturer, Count Zeppelin. While he was not the first to experiment with airships, he is the one primarily responsible for perfecting the concept. From 1928 to 1937, the ultimate experience in transportation was offered by his mammoth airships Graf Zeppelin and Hindenburg.

Construction of the latter — a larger and more luxurious craft designed specifically for crossing the North Atlantic — began as early as 1928. However, the Depression and the poor economic status of Germany after the first World War stifled any real progress. When Adolf Hitler became Chancellor in 1933, he saw the importance of the Zeppelin Company to the country and by 1935 the Deutsche Zeppelin Reederei (German Transport Company) was established, now under government control. Airship LZ129 was finally completed in 1936. The first of a series of trial flights took place on March 4 of that year. It is interesting to note that the name “Hindenburg” was not given to the airship until after the first few trial flights were completed. To some, making a voyage prior to christening a ship was considered a bad omen and an indication of a disaster to come. 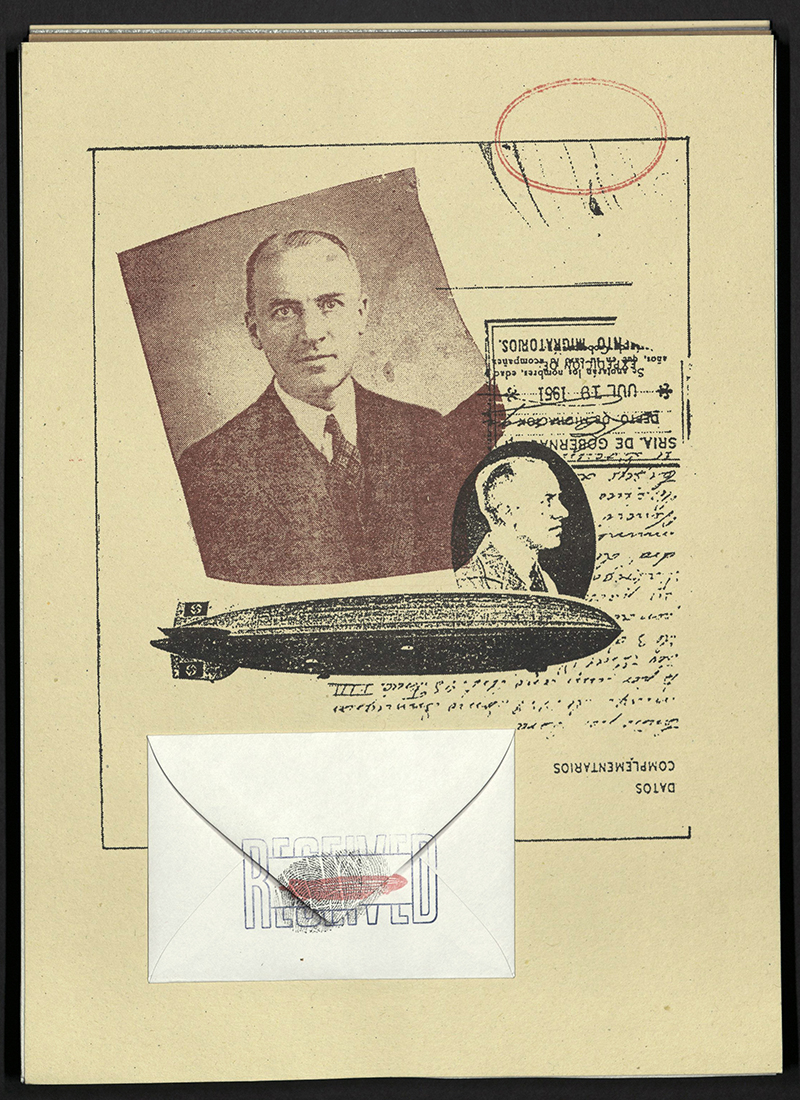 The Hindenburg was the first craft in aviation history built specifically for the North Atlantic route, but it was also so much more than just a commercial flight. In reality, the Hindenburg was an airborne hotel which transported dozens of passengers in luxurious comfort. Powered by four Daimler diesel engines, the LZ129 model had a maximum speed of eighty-four miles per hour and a cruising speed of seventy-eight miles per hour, with a total range of 8,750 miles. At 803 feet 10 inches long, 146 feet high, with a maximum diameter of 135 feet 2 inches, the Hindenburg was the largest aircraft ever built — so large that when flying over a city the Zeppelin cast a shadow that covered several blocks. Inflated with some 7,063,000 cubic feet of hydrogen, the Hindenburg had a total lift of 472,940 pounds. Its skeletal structure consisted of thirty-six longitudinal members joined together by fifteen rings. The latter divided the airship into sixteen compartments, each of which possessed a gas cell.

The highlight of the Hindenburg was the two-level passenger quarters which were confined to one bay and located completely within the forward part of the hull. The layout of the A deck consisted of a dining room on the port side, a lounge and writing room on the starboard side ,and twenty-five staterooms in the center. Situated on B deck were kitchen, toilet facilities, bathroom and shower, smoking room, and bar. Once on board, the passengers were escorted to their cabins where stewards explained the light, heat, and ventilation switches. In addition, each stateroom had a push button bell which could be used at any hour of the day or night to call the steward. After unpacking, travelers inevitably congregated at the large windows to witness the departure. Without the sensation of noise or vibration, the airship would rise.

A journey by airship was most certainly a memorable adventure. Cruising at an altitude of one thousand feet presented scenery in an entirely new dimension. The airship floated over cities and raging ocean waters creating a feeling of awe. During its inaugural year in 1936, the Hindenburg made ten round trip flights to North America from Frankfurt, transporting some 2,798 passengers with basic fare costing $400.00 one way, or $720.00 round trip. Jubilant over the Hindenburg’s successful first year, Zeppelin Company officials looked forward with anxious expectation to the 1937 season, which was to begin in May. The airship had been scheduled to make eighteen departures to Lakehurst, New Jersey, along with two trips to South America.

In the evening of Monday May 3, 1937 the Hindenburg departed from Frankfurt to the United States for its first trip of that year. The following day, the airship calmly flew above a stormy ocean at an altitude varying between 600 and 10,00 feet. By May 5, the mighty Zeppelin could be seen nearing the coast of Newfoundland, before heading south toward the U.S. border where preparations were in progress at Lakehurst, New Jersey for the first landing of the 1937 passenger season. Strong headwinds off the coast caused the Hindenburg to be delayed several hours. The giant craft planned to land at Lakehurst early in the evening, stay on the ground for a period of time, and then depart for Germany at about 10:00 pm. 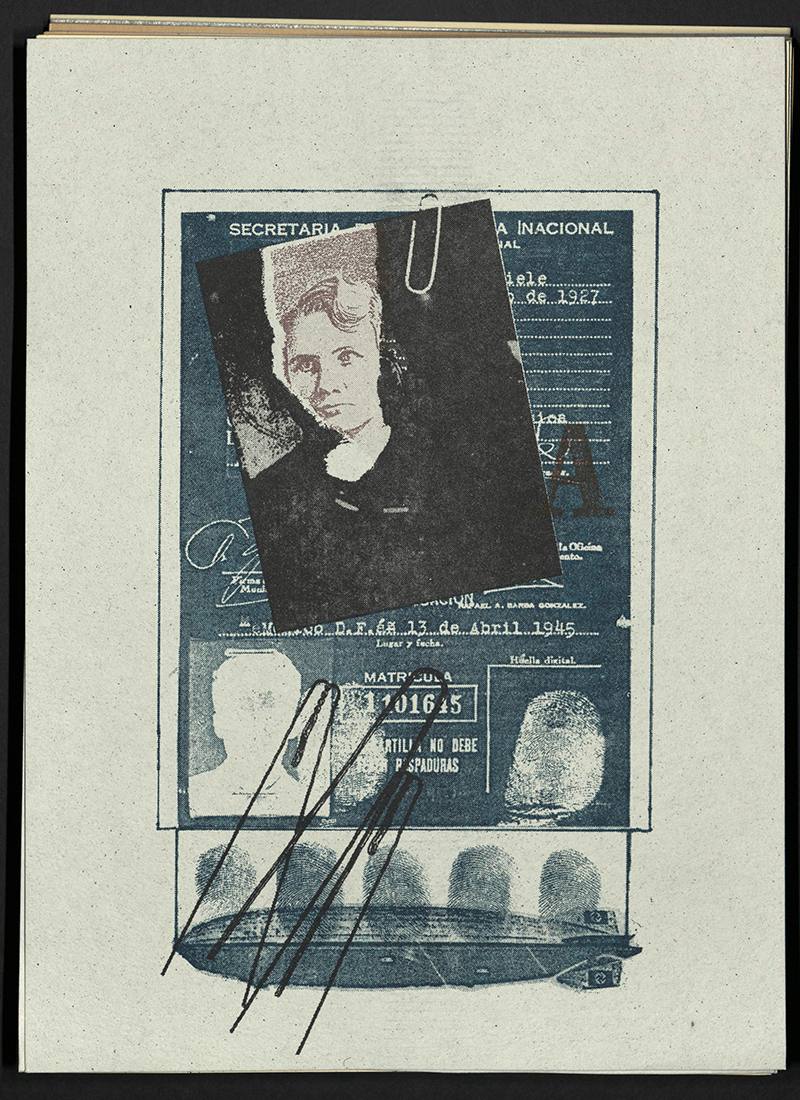 The Hindenburg finally arrived in the vicinity of Lakehurst at about 4:00 pm. Due to poor weather conditions, however, safe landing was not possible and the airship was forced to fly on and ride out the storm. Several hours later, encouraged by improving weather, the airship slowly circled back toward the Lakehurst airfield to make its approach. Engines idling, the Hindenburg began its gentle descent with the nose of the ship pointed toward the mooring mast. Hovering at an altitude of approximately two hundred feet, the handling lines were dropped to the ground crew. Although the rain had stopped, there was still a light drizzle in the air. The Hindenburg was barely moving when suddenly, and without warning, a reddish glow appeared near the stern of the airship followed by a bomb-like explosion.

Flames spurted from the rear of the craft and rapidly spread forward enveloping the whole ship. The Zeppelin buckled in the center, its bow shooting upward before the flaming hulk collapsed to the ground. Passengers, who only seconds before were laughing and waving from the airship’s windows, could now be heard screaming and moaning. On the ground, intense heat and fire drove rescue workers away from the entangled web. It took slightly more than half a minute for the giant craft to be destroyed and all its hydrogen consumed. The fires burned for hours, however, as the wreckage was strewn in a pool of its own fuel oil, sending black clouds of smoke billowing upwards.

Lightning? Static electricity? A backfiring motor? Sabotage? An act of God? Immediately after the crash various boards of inquiry were established and several theories advanced. In truth, the real cause of the Hindenburg disaster remains an unsolved mystery, eighty-five years later. 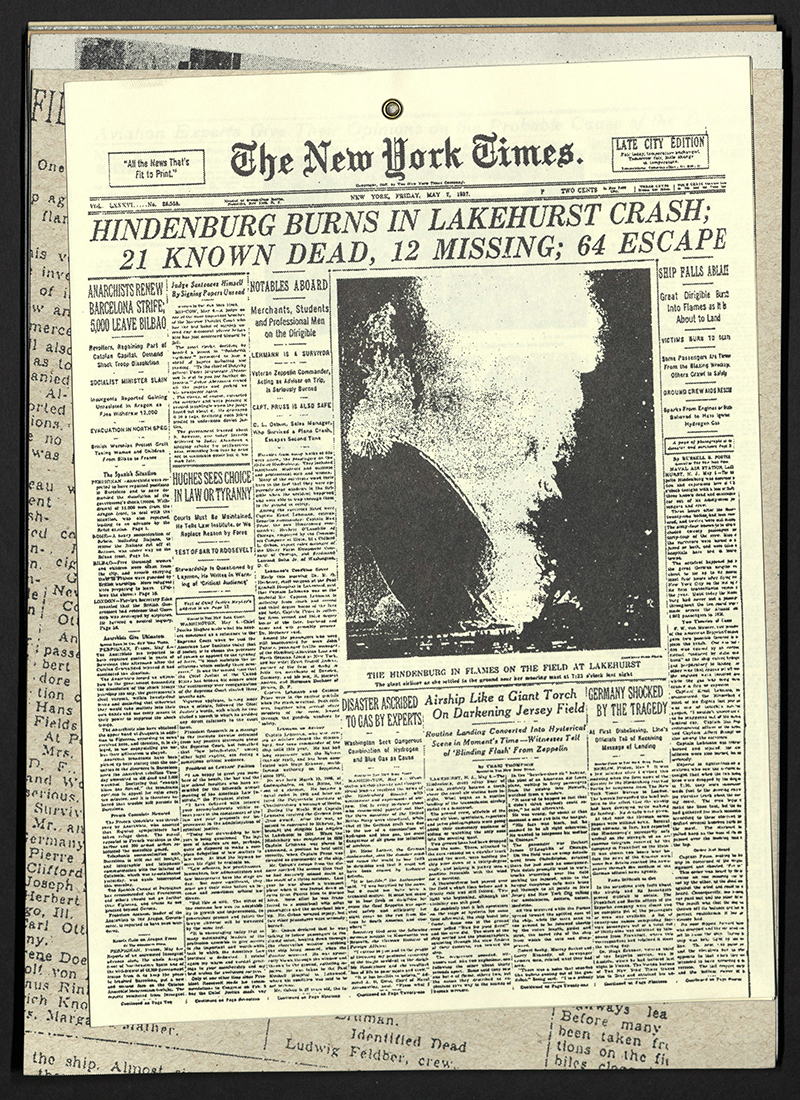 Thirty-six people died as a result of the Hindenburg disaster — including thirteen of the thirty-six passengers, one member of the ground crew, and twenty-two of the sixty-one crew members, including Captain Ernst Lehmann, Chief Radio Officer Willy Speck, and Chief Rigger Ludwig Knorr. The first figures observed emerging from the wall of flames were a woman and two children. The woman was Mathilde Doehner, the children, her two boys, Walter and Werner, whom she had thrown out the promenade windows into the arms of waiting ground grew before the ship hit the ground. The mother and children were finishing a placid dinner in the airship’s dining salon when the explosion came. Irene, the sixteen-year old daughter, had slipped out to watch the descent. Blinded and seared, Irene was rescued but eventually died of her burns before morning. Mathilde’s husband, Hermann, died inside the ship. The Doehner family was on its way home to Mexico City after a trip in Germany. Walter Doehner, the very last survivor of the Hindenburg disaster, recently passed away on November 8, 2019.

The next morning Americans awoke to screaming newspaper headlines and riveting pictures of the Hindenburg’s fiery fall. Never before had photographers and newsreel cameramen been present to record every second of a disaster. Soon, theaters around the world were showing the horrifying thirty-four second sequence as the famous airship burst into flames and plunged to earth. 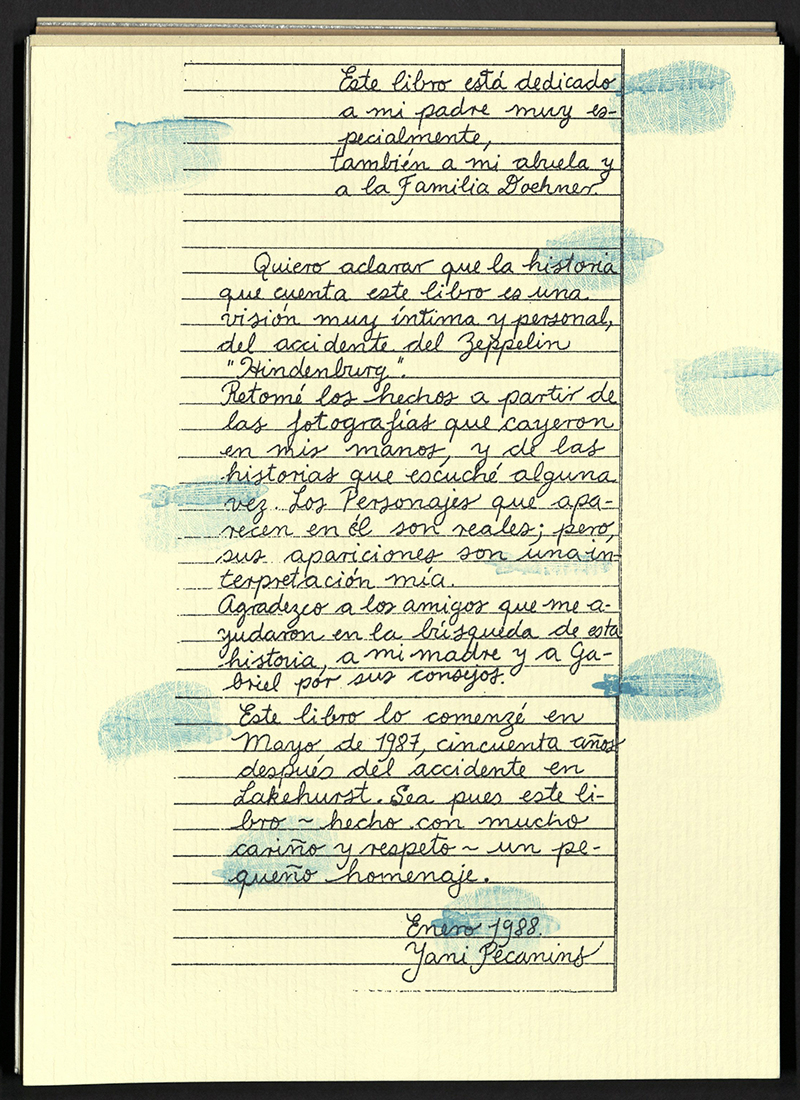 This book is dedicated to my father, and also my grandmother and the Doehner Family… This book began in May 1987, fifty years after the accident in Lakehurst. Therefore, let this book – made with much love and respect – be a small tribute.

Un Viaje en Zeppelin carries ideas, intimate experiences, and memory within a structure of metalanguage. Yani Pecanins abandons the traditional means of book production to explore a new storytelling discourse. Thirty years after the book was first published, and eighty years after the Hindenburg accident, La Duplicadora, a printing press using risograph, brought together graphic artist Emmanuel Gracía, editor Vannesa López, and Pecanins to create a new edition of the work, incorporating the same materials used in the original, 1988, edition. Un Viaje en Zeppelin contains a collection of anecdotes from her father’s family history, a visually complex book. For it, Pecanins built a cardboard box containing more than twenty individual loose pages including alternative and homemade printing techniques such as mimeograph, photocopy and rubber stamping. The book also contained a paper suitcase with postcards, folded maps and diagrams of the structure of the zeppelin, as well as family photographs, newspaper articles regarding the accident, and handwritten letters.

Yani Pecanins was born in Mexico City to German and Catalan parents who immersed her in fine arts from an early age. Her mother owned an art gallery.  Her interest in expanding artistic possibilities led her to experiment with a variety of techniques and materials in her work. In 1977, she co-founded La Cocina Ediciones, a publishing house dedicated to the production and distribution of the book arts. In 1980, Pecanins began creating her own artists’ books, incorporating photographs; letters; found objects such as clothing, needles, pins, and thread; and handwritten texts to express an intimate inner world of exile, isolation, and loss. Her bookwork moves beyond a container of text to being, in and of itself, an aesthetic object of content and message.