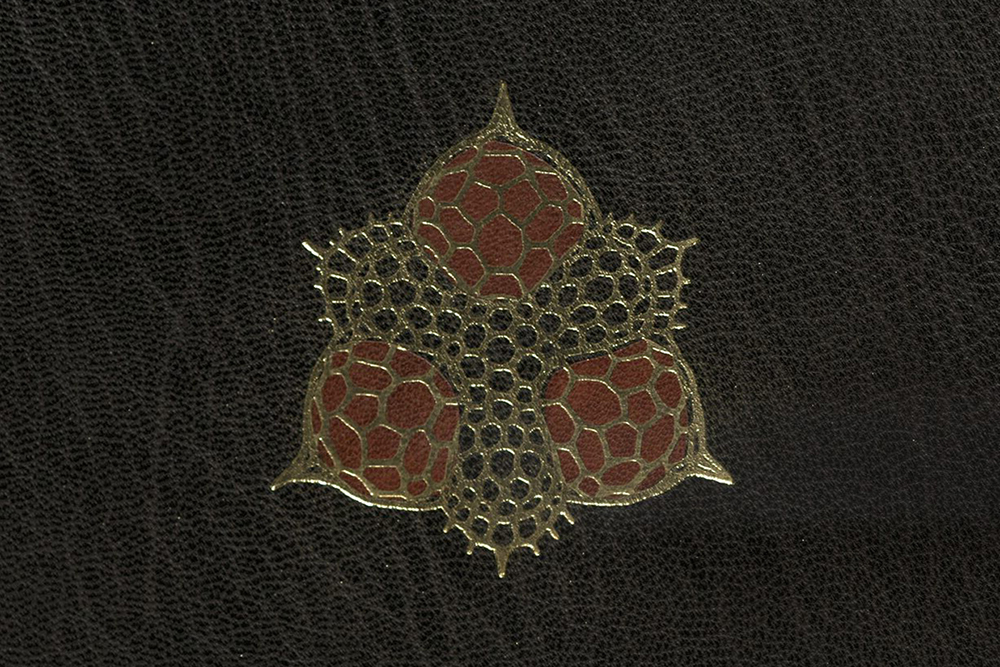 “Mrs. Delany’s was an age when genteel women, whether amateur or professional, were occupied with crafts, decorative works, design and fine arts. Embroidery, quilling, shellwork, japanning, silhouette making, drawing, painting in oils and watercolours, knitting, sewing, flower making, modelling in wax and clay, miniature painting, and horticulture were among the arts practiced.”

From the publisher’s website: [Mrs. Delany] is an “imagined collaboration between Mrs. Mary Delany (1700-1788), an English widow, woman of accomplishment, and creator of imaginative botanical ‘paper mosaics’ and Herr Ernst Haeckel (1852-1911), a distinguished and controversial German biologist and artist who devoted much of his time to the study and rendering of single-celled creatures.” Cut paper image of a microscopic organism affixed to frontispiece with another cut-paper image affixed to the recto of the same sheet; eleven cut-paper interpretations of microscopic organisms tipped on to captioned plates; tipped-in cut-paper initials, numerous smaller cut-paper decorations. The paper cuttings are adapted from Ernst Haeckel’s Die Radiolarien (1862) and Kunstformen der Natur (1899-1904). They are cut from a variety of papers, including Yatsuo, Kozuke, mulberry, Gifu, Kitikata, and Kiraku kozo from Japan; Ingres and unidentified wove from Europe; and Reg Lissel handmade papers from Canada. Some were cut from papers previously marbled in the Turkish or Suminigashi styles. Some were dyed by the papermaker; some were dyed or otherwise hand-colored for this book. The cuttings are mounted on one of Arches text wove (white), Arches MBM Ingres (black) or Hahnemuhle Ingres (black). Edition of twenty-five copies plus six hors de commerce, each signed by the author, printer, and binder. Rare Books copy is XXII.