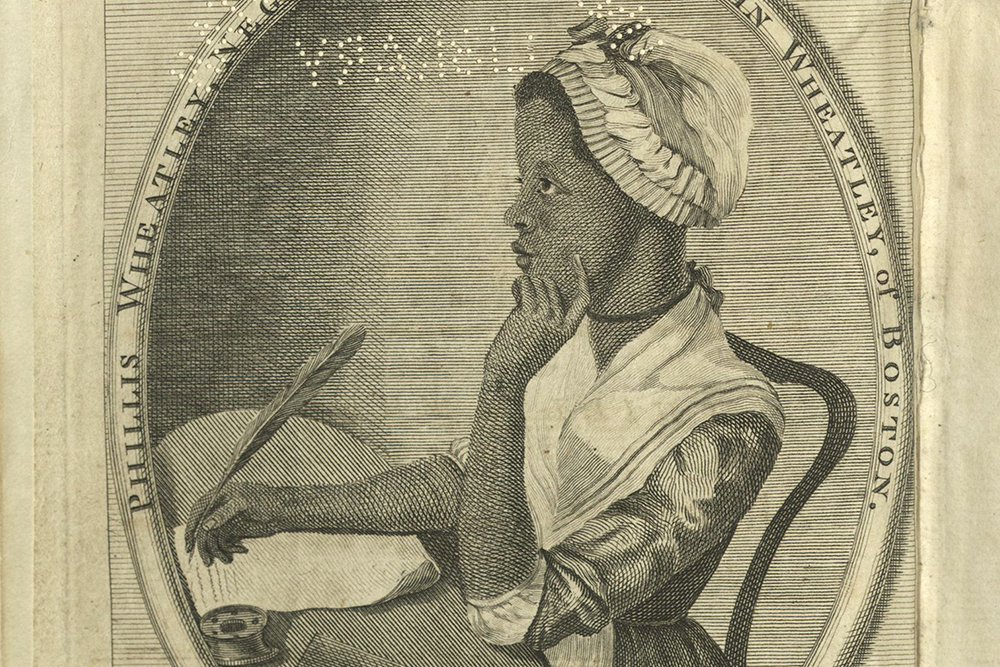 17 Jan Book of the week — Poems on Various Subjects, Religious and Moral… “Still, wond’rous youth! each noble path pursue,
On deathless glories fix thine ardent view:
Still may the painter’s and the poet’s fire
To aid thy pencil, and thy verse conspire!”
— from “To S. M. A Young African Painter, On Seeing His Works”

Phillis Wheatley, aged about seven, was bought by John Wheatley of Boston for his wife, Susannah, as a domestic slave, at the Boston Slave Market in 1761. She was probably born in Senegal/Gambia, near Cape Verde, of a Muslim people known as the Fula. She was transported from Africa to Boston on the slave ship, Phillis. The Wheatley family taught her to read and write. She read John Milton and was especially taken with the poetry of Alexander Pope.

Poems on Various Subjects was the first book of poems published by an African American. It gained international fame, and was particularly lauded in England. On a trip to London with Nathaniel Wheatley, she met Benjamin Franklin. Many at the time did not believe that Wheatley, a Negro, could have written this verse. However, Boston intellectuals, including Thomas Hutchinson, governor of Massachusetts; John Hancock; and Benjamin Rush came to her defense and attested to her authorship. Abolitionists used Wheatley as an example of the artistic and intellectual capabilities of black people.

Susannah Wheatley died a year after this book was published, and John Wheatley freed Phillis, possibly under pressure from others. Although Wheatley became one of the most published American poets of her day, she died with her sick baby by her side, at the age of thirty, in poverty, and deserted by her husband.

The copperplate engraving frontispiece portrait of Phillis Wheatley is the only known work by enslaved artist, Scipio Moorhead (b. ca. 1750).

Only about one hundred copies of this book are known to exist today.