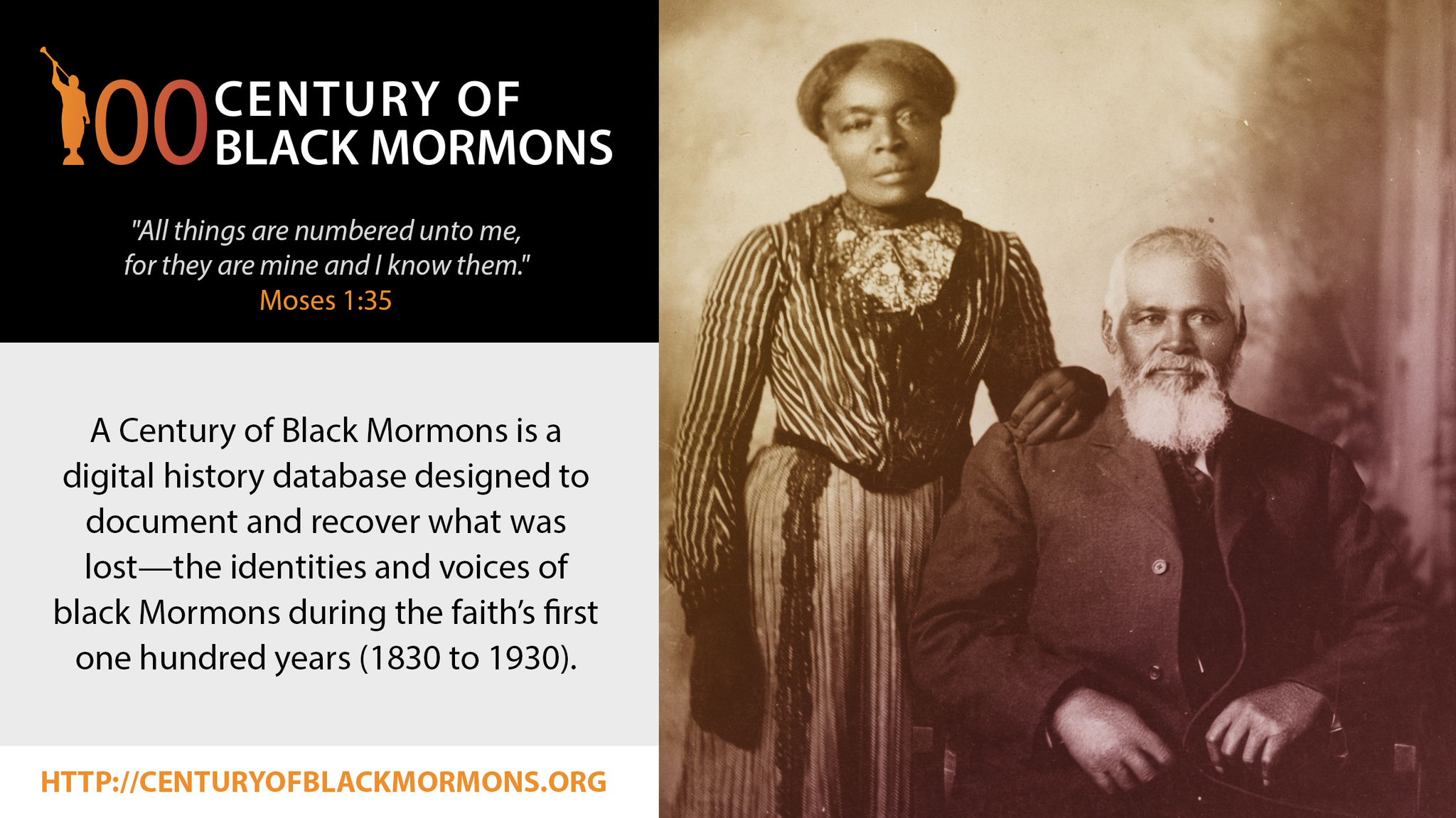 Over the weekend, I attended Black, White, and Mormon II: A Conference on Race in the LDS Church Since the 1978 Revelation.  As part of the conference, a new public history project that the Marriott Library IT and DLS teams have been collaborating on was announced. Century of Black Mormons documents the history of Black Mormons from 1830-1930.  Professor Paul Reeve developed the project after writing his book Religion of a Different Color: Race and the Mormon Struggle for Whiteness.

I thought I would share a little bit of information about the process involved in developing the site, along with some technical details that people in the library/digital humanities/digital public history fields may be curious about. We started talking about the project and having some initial meetings back in the fall of 2017, but work really began on the site in the spring of 2018, with the majority of the work completed from April to June, according to my ad hoc project management spreadsheet.  This was only possible because the content for the site had already been gathered, curated, and organized, even though it lived in dropbox and files on a personal computer.

There were a number of aspects that the team had to work through in figuring out how to represent the information for Century of Black Mormons in OmekaS. In terms of digital content, we had genealogical information about each person, saved in the GEDCOM data format. There were also multiple primary source documents such as photos, census records, and baptism records that needed to be associated with each individual,  along with biographical essays. You can see all of this coming together in the stories of the people represented in the site such as Freda Magee Beaulieu.  One of the first things we did was take advantage of OmekaS support for customized vocabularies,  with a variant of GEDCOM edited by Jeff Turner, a graduate student working on the project. Jeff added additional fields to track some of the unique information for Century of Black Mormons such as baptism and confirmation dates.  We tested multiple plugins and configurations for the site, helped by Dhanushka Samarakoon, who installed plugins and provided web hosting support for our instance of OmekaS. We decided that the best way to express all the information we had was on a page for each person with embedded metadata and the Universal Viewer to display the primary source documents.  Century of Black Mormons has two item sets for people and primary source documents within OmekaS, that combine to form the database. Essays that were originally written in MS Word needed to be run through a MS Word html clean up service before being copied over to the OmekaS site. The key component of making the site work was Leah Martin Donaldson’s custom theme for the site, which allowed us to embed the genealogical information about each person into the biographical essays in a visually attractive way.  Jeff Turner developed visualizations for the site,  for example this timeline of baptismal dates, with the Knight Lab Timeline application.

Even though the site was just launched, in a sense the work is just beginning. There are 41 out of a possible 238 people whose stories are currently represented in the site, and I expect moving forward we’ll likely want to make adjustments and develop new ways of interacting with the information collected by Century of Black Mormons. For example, we’re curious to see what we might be able to do with the Neatline plugin if that is made available in OmekaS. While this post gives background in the digital curation work involved in the public history site, if you look at the credits page, you can get a full sense of the scale of collaboration involved in developing a public history project like this. For me, working on this project has been very personally rewarding, and figuring out how to represent Century of Black Mormons in digital, web-accessible was an exciting challenge.

Here are some additional articles about the project for additional context: