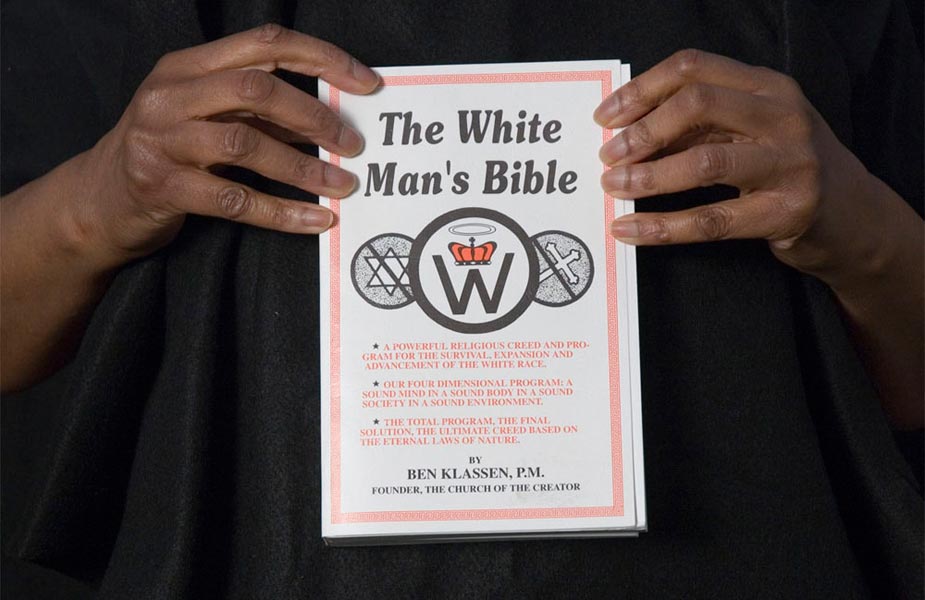 Posted at 15:57h in Red Butte Press, This Book is Now by crane 0 Comments
0 Likes
Share Clarissa Sligh is a visual artist, lecturer, and essayist. Her photo-text images, artists’ books and installations have been exhibited in places such as The Museum of Modern Art and the Jewish Museum, New York, NY, Walker Art Center and the Minnesota Center for Book Arts, Minneapolis, MN, The National Gallery of Art and Corcoran Gallery of Art and the National African American Museum, Smithsonian Institution, Washington, DC. For over 30 years, Sligh has woven together the cultural, historical, personal and political to explore concepts of memory and transmutation, and perceptions of boundaries and identity: themes that have roots in her own experiences.

Transforming Hate (2007-present) is a project comprised of folded origami cranes, photographs, installations, artist books, other image-text narratives, and workshops with local community organizations. In this work, historical elements are used as a framing device to construct the evolution of our shared identity.

The work in progress is inspired by an earlier installation done for the Montana Human Rights Network in collaboration with the Holter Museum of Art in 2007. Tell us about a recently completed book project.

I am an African American artist. Transforming Hate is essentially an eight-year meditation on a beautiful art piece that I made from white supremacist books. As I folded origami cranes from pages of hateful texts, I set aside my feelings about what I read. Drawn to the beauty of the forms that resulted as I folded the pages, I felt confused by my conflicting emotions. After making the piece, I began to look at that experience. To deepen the experience of your work, is there anything that you would like to convey to the reader/viewer about the significance and meaning of the work which might not be readily accessible?

Clarissa: Over the eight-year period that the book evolved – I grew a lot. It was not an easy trip. I had to face a lot of my fears and embrace what I saw as my weaknesses as a person. I had to do things that I hate to do – like ask for help. I like to believe that in order for it to be “my” book, I have to do it all myself, be totally in control.

I began making this book to help me explore the emotional and psychological conflicts I felt about turning pages of hate rhetoric into a beautiful art object. Over the eight-year period that the book evolved – I wrote in my personal journals almost daily. One day, however, something shifted and I began to see my own feelings of hate and the way I carried and projected it towards myself and other people.

So while the book began with the concept of my looking at hate and the indifference that I felt I experienced because of who I am, the book required that I also look at my own hate and the way I carried and projected it towards myself and others. I began to see how it imprisoned me; made me feel bad about myself, hardened my heart, and became a heavy burden to carry.

I am black but the book is not about being black. It is about me as a human being living in this time. We all live in history. The past is present. We all have a story. We all have worth. One of the strengths, of who we are, is the ability to transform what we see as a deficit in ourselves. And that power to transform is a very powerful force. Did you discover any new mode of making, any new skill or technique which you had not previously engaged in?

Clarissa: Folding origami cranes was definitely new and different for me. My friend, Kimberly Purser, taught me how to fold, assured me that my aging fingers could do it, encouraged me to keep going, and folded cranes beside me when I felt I could not make one more fold.

Also, I hate to admit that I am essentially still stuck in the 1980s when I saw my first artists’ books at Printed Matter below Canal Street in Manhattan. There was this conversation that it might possibly become an inexpensive way to distribute or make art more accessible to more people and that it needed to be produced inexpensively. Despite the fact that I spend days and days and months and sometimes years making a book, I tend to think of it as work to be made available for “the people.” As a result, I try to think of my books being produced as black and white or as a one-color process.

The Use of Color I had conceived of this book as black and white with high contrast photographs printed on a newsprint type of paper. I made dummies and laid it out that way in InDesign. This is what I gave to my designer friend, Susan Rhew, who was my liaison with the printer. Susan loved the book and wanted to spend time with it. When she came back to me, she suggested that I give it more – soul, color, photographs and make it a more inviting space. She felt the book should have beauty and grace and asked me to send her more photographs that might help convey that. When I saw what she was thinking about I was really surprised at the transformation. I liked it but did not think I could afford the additional expense. Then she got bold and began showing me beautiful papers and asked me what I thought about adding a crane to each book? I liked the ideas. From the beginning I wanted physical origami cranes included, but let it go. It was too complicated. Susan put the cranes back into the mix in a simpler way but I did not think I could afford the additional expense of color or the paper. All I could think about was, “where is the money coming from?”

At some point, I could only think about how beautiful the book was going to be and how necessary a component beauty had become. Despite my reluctance, I went to my most passionate supporters and asked for the additional money for the book. Making a die cut: Unfortunately I do things the hard way – often cutting by hand, pages and page inserts for my book editions. Susan encouraged me to get a die cut for the book carrier since this edition was going to be 1,000. I could not believe how much that facilitated the cutting and folding. Now I cannot imagine not having a die cut made for any edition of more than 25 books. Speak about potentials and possibilities—what would you do differently if you were to reproduce the project from the beginning?

Clarissa: If I were to now do this project from the beginning, perhaps I would make images – including drawings, prints and photographs that would be parallel but not related to the writing.

Was building this book generative for you in terms of conceptualizing future projects? Speak about mystery—what about your book do you still not understand, which you hope will some day be revealed?

Clarissa: As you might know, Sadako and the Thousand Paper Cranes popularized an ancient Japanese legend that anyone who folds a thousand paper cranes so pleases the gods, they will be granted one wish. I ended up making an edition that required folding 1,000 cranes – one for each book. I don’t know how I got there. It was never my intention.