When 21-year-old Kevin Jenkins returned from his LDS mission in Ecuador, he promised himself he would not let his hard-won Spanish language skills deteriorate. He completed a B.A. in Spanish Translation at Brigham Young University, then went on to serve his local LDS church as a liaison with a small Spanish-speaking congregation in St. George.

Fast forward to 2006. Kevin is employed as Copy Desk Chief at the St. George, Utah, newspaper, The Spectrum. Publisher Brent Low and HR Director Gloria Bertram are planning a new venture: a Spanish-language weekly serving the local community. To be titled El Sol, the new paper would focus on local news—information needed by the area’s Spanish-speaking residents, a demographic that was growing by 30% a year. “We launched this product to fill a market need,” Low stated. Kevin was offered the job of copy editor on El Sol. 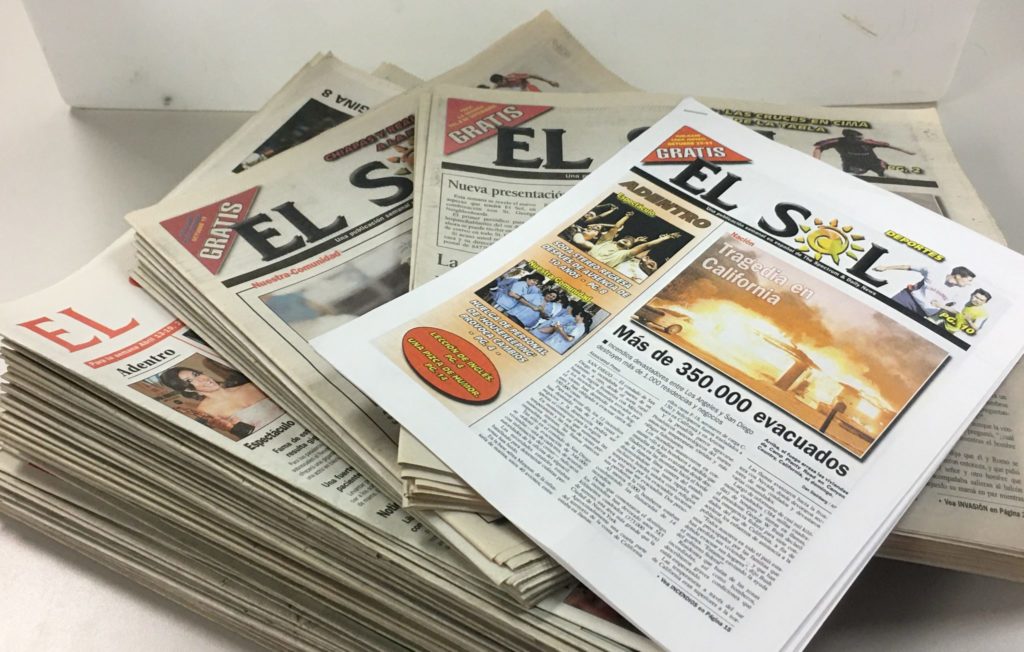 Former staffer Kevin Jenkins stored all 138 issues of El Sol in his St. George basement for 14 years. The full run of El Sol has now been digitized and made available in color at Utah Digital Newspapers. Every word of every page is keyword searchable. And now that El Sol is known to Marriott Library, it will be cataloged for the first time ever.

According to Gloria, El Sol emerged from a desire to educate readers and integrate them into the community. “If something is happening in the state legislature or the city council, the Spanish-speaking population needs to know about that,” she says. “El Sol wasn’t just an effort to make money. We were doing a service to the community.”

Many newly arrived immigrants haven’t had time to master English thoroughly. Yet, they are still citizens and active participants in the community. They need information. -Kevin Jenkins

Gloria recalls that the first designs for El Sol looked too much like any other newspaper. She believed the target audience would want something vibrant and image-rich. “We knew we needed more color.” This accounts for the eye-catching nameplate. For a while, El Sol even boasted magazine-style covers, saturated in green, yellow, fuchsia, orange and periwinkle.

Splashes of color and a blazing sun reflect the excitement around the 2006 launch of El Sol, a professionally produced weekly newspaper published specifically for the Latino and Hispanic communities of Washington County, Utah.

After nearly a year of planning, in April 2006, El Sol burst onto the scene: lively, colorful, free—and 100% Spanish. It would be distributed in grocery stores, shops, libraries and anyplace else it might find its audience. The business model was to generate revenue through ad sales, a common plan in the newspaper industry, where subscription and newsstand sales provide only a tiny fraction of operating revenue. Although The Spectrum made a capital investment in its new subsidiary, El Sol was on its own. The staff was free to seek out and report any story they thought would be of value to the Spanish-speaking community in St. George and environs.

In 138 visually appealing issues, ranging from 12 to 24 pages, El Sol published job postings and other classified ads. It covered local Hispanic soccer leagues, school events, proposed changes to public transportation, and state and local politics. It published original editorials and translations of stories that arrived from the wire services. If a Spectrum reporter covered a court case or other event of interest to the Latino community, El Sol staff could take that text and publish a translated version. The Spectrum‘s election coverage was particularly important for the Latino community, because it included details on how to vote and who the candidates were. 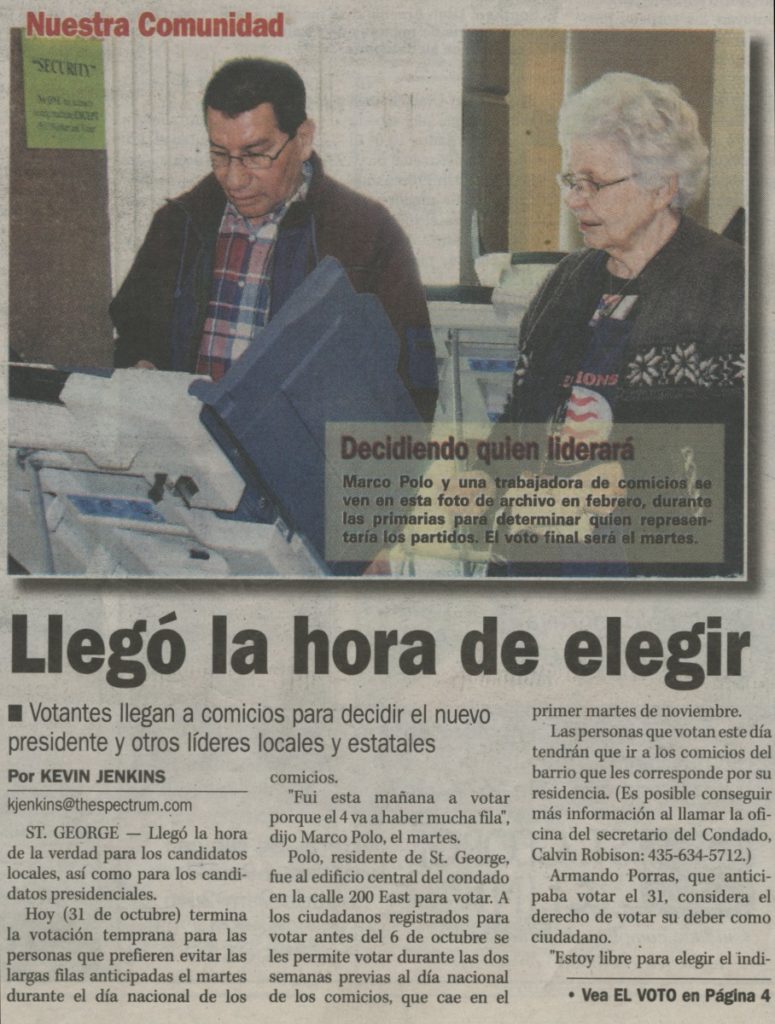 Marco Polo, a Colombia-born legal resident of Utah, casting his vote in 2008. Kevin Jenkins: “El Sol illustrated that Spanish-speaking people can be citizens here, and can participate as citizens.”

In addition to translated articles, the paper did original reporting, covering issues of particular interest to the Spanish-speaking community across Washington County, including incidents of harassment of Latino residents and accusations of discrimination by police. At times, the original reports in El Sol were so well done, Kevin was asked to translate them into English so they could run in The Spectrum.

A glance at Utah’s 171 years of newspaper publishing will show that news by, about, and for the local community is what kept many small newspapers alive. Content like this not only supports a community. It builds it, reminding every reader of his common interest with his neighbors. Every classified ad is a little window into the life of the town.

In Utah history, more than 15 newspapers have been published for immigrant communities. They appeared in German, Greek, Danish, Dutch, Norwegian, Italian, Slavonian, Spanish, Swedish, and Japanese.

Occasionally, a Spanish-language tabloid out of Las Vegas would launch a Southwest Utah edition. “They tried to find a presence in our market,” Kevin says. But once they saw what El Sol was doing, they gave up. They could never compete with original reporting on local Washington County events in Spanish.

Initially, four El Sol positions were funded: Editor, Copy Editor, Reporter and Ad Sales. The latter position proved hard to fill, so The Spectrum‘s ad sales team was enlisted to drum up ads for El Sol. This quickly proved unworkable. Without Spanish language skills, it was difficult for Spectrum staff to reach out to Latino businesses. The quartet became a trio, and when the editor was laid off, Kevin and reporter Rosa Martinez moved forward on their own, each playing multiple roles—reporting, translating, taking photographs and selling ads.

Gloria Bertram (far left), Kevin Jenkins (second from right), and Rosa Martinez (far right). Kevin comments: “El Sol served a purpose of helping to unite a sub-community of non-English speakers here. When we did stories about things people were doing—celebrating Cinco de Mayo, for example—that is a function of any newspaper: you see your neighbors in those pages.”

Kevin recalls situations in which he, Mexico native Gloria, and Rosa, an Argentine, would bat around the best way to translate an English term. After all, a Spanish dictionary’s entry for ice cream may not match current usage or account for regional differences. Should it be nieve? Helado? Dulce de leche? Gloria would even call her family, living in Mexico near a border, to find out what term they thought would be most commonly understood.

In 2006, after ten years copy editing The Spectrum and other publications, Kevin had been grateful to jump over to El Sol, where he could use his Spanish and get involved in different aspects in journalism. Indeed, after Martinez left in August 2008, Kevin became a one-man show: reporter, copy editor, layout artist, translator, photographer, editor and ad salesman. Gloria proofread his Spanish, but substantial changes were rarely needed. 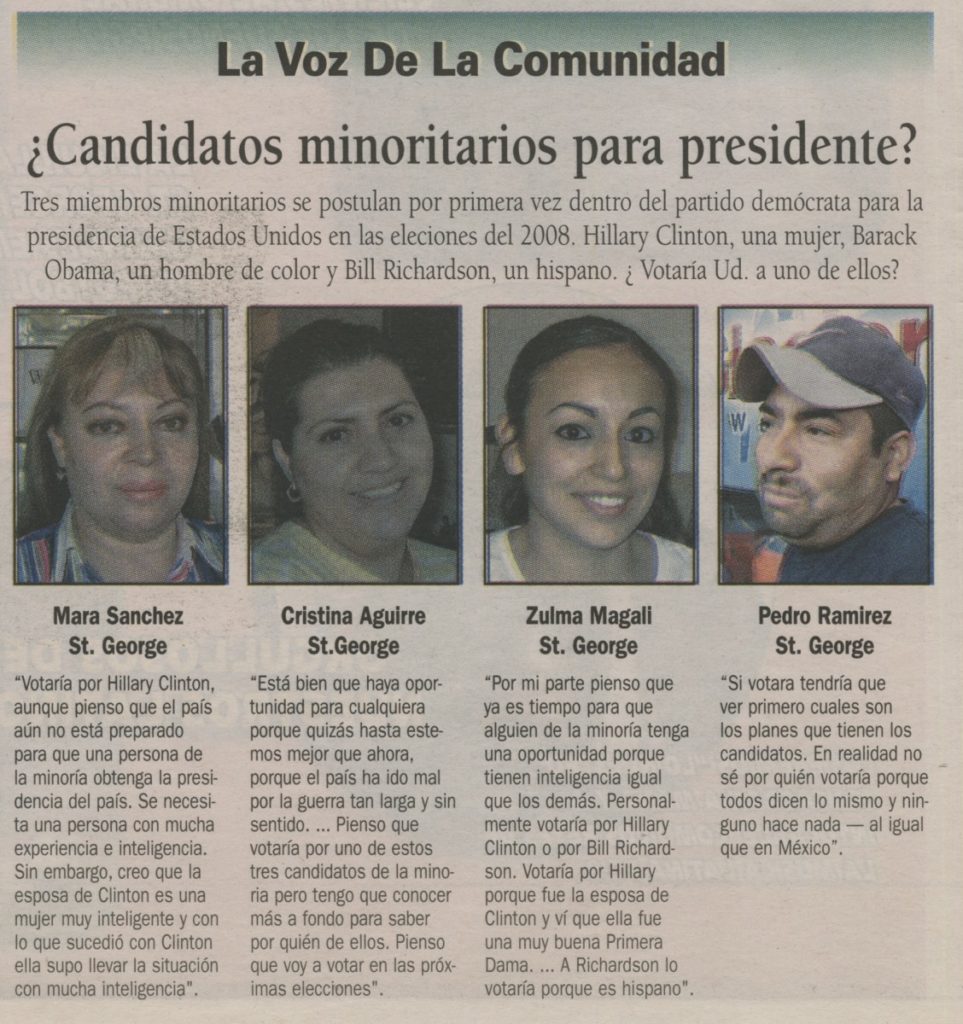 Economic pressure on the newspaper industry had been worsening since the early 1990s. Now it was late 2008 and the global financial crisis had crippled the economy. Small businesses were closing. Construction jobs dried up and ad sales dwindled. Several weekly Spectrum publications closed or were folded into the daily edition. Resources that had been going toward El Sol were pulled back in an effort to keep The Spectrum‘s main business healthy.

On average since 1995, a Utah newspaper has shut down every 18 months.

For Gloria Bertram, it’s important that people understand: “El Sol did not fail,” she says. It had built a readership of 4,500 and its finances were typical of a new publication in startup phase. It was on track for success. In speaking with these dedicated staffers, to whom the paper meant so much, it is clear: El Sol wasn’t just a newspaper; it was a mission. 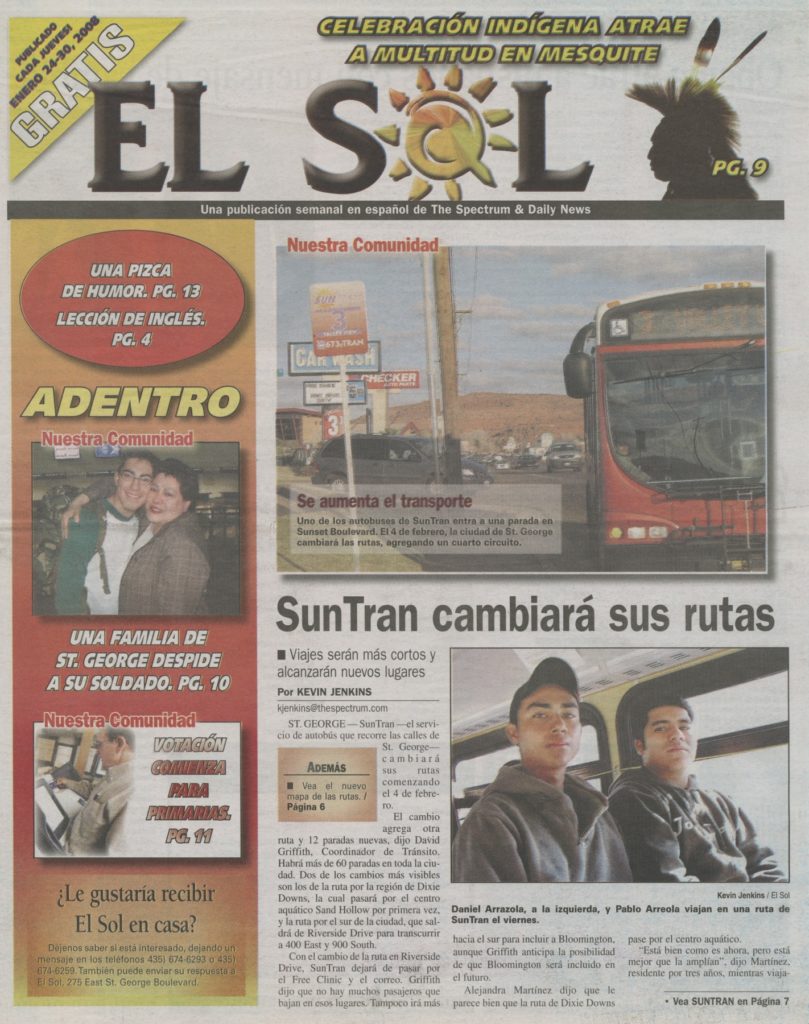 Kevin comments: “Members in any community may feel marginalized. A newspaper providing information will help them solve problems, help them to become good citizens, so they can ultimately turn around and give back to the community that has nourished them and helped them to thrive.”

“To this day, it hurts to talk about it,” Gloria says quietly. “If I had a lot of money or win the lottery… If I ever have the resources, I would want to create a strong digital platform with local and regional news unique to our Spanish-speaking community. El Sol was never replaced.”

Although its life was brief, for the Spanish-speaking residents of Washington County, El Sol burned bright.

According to the U.S. Census Bureau, in 2007, 7.5 % of Washington County’s population identified as Hispanic or Latino. Estimates from 2018 put the figure at over 12%.

Corporate owner Gannett’s downsizing at The Spectrum continued, with layoffs in the last quarter of 2008 and again in 2014 and 2018. When Gloria Bertram started work there in 2004, The Spectrum had 170 employees; today it has 12. Gannett is now owned by New Media Investment Group, headquartered in New York.

Between 2008 and 2018, newsroom employment in the U.S. dropped by nearly half (47%). Source: https://www.pewresearch.org/fact-tank/2020/02/14/fast-facts-about-the-newspaper-industrys-financial-struggles/

In 2008, Utah lost nearly 15% of its construction-industry jobs. Source: “Employment, Wages, and Labor Force,” Utah Department of Workplace Services, reported in 2009 Economic Report to the Governor, accessed on August 10, 2021 at https://gardner.utah.edu/wp-content/uploads/2009ERG.pdf?x71849