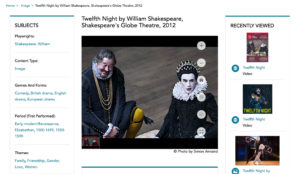 From the beginning of the COVID-19 pandemic, when University classes all went virtual, the Marriott Library redoubled its efforts to acquire resources that could be accessed online. And theater has been well represented in these acquisitions. Since January 2020, Marriott Library has purchased perpetual access to these curated, digital collections:

Twentieth Century North American Drama, 2ndEd: TCNAD2 contains 1,905 plays by 419 playwrights, and more than 150 of the plays are published here for the first time. This collection offers a unique window into the economic, historical, social, and political psyche of the US and Canada during the last century.

North American Women’s Drama, 2ndEd: NAWD2 contains the full text of 1,517 plays written from colonial times to the present by more than 330 playwrights from the United States and Canada. Many of the works are rare, hard to find, or out of print. Almost a quarter of the collection consists of previously unpublished plays. 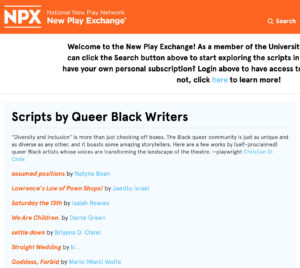 New Play Exchange: NPX is the world’s largest digital library of scripts by living writers. Readers can use the powerful search interface to locate subject keywords in a play’s description or browse plays by genre, length, intended audience, cast size and diversity, character gender and race, and playwright demographics. Download a writing sample or the full text of a play, as determined by the playwright.

The number one request we get from Theatre faculty and students is for recordings of staged productions. The streaming videos contained within the collections below capture a dynamic energy between the actors and their audience that doesn’t exist in a film adaptation, not to mention the sets, lights, costumes, music, visual effects, and staging that are all part of the magic of live theater.

Theatre in Video II: Doubling the content previously accessible, TIV2 brings together classic and contemporary plays and documentaries, with a focus on international productions, including rarely produced plays from the Stratford Shakespeare Festival, Pericles and King John. 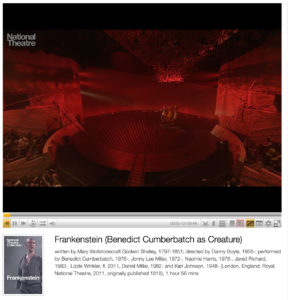 National Theatre Collection: 30 live performances recorded from the National Theatre’s stages in London. Highlights include both versions of Frankenstein (alternating Jonny Lee Miller and Benedict Cumberbatch in the roles of the Creature and the Doctor), Lorraine Hansberry’s Les Blancs, and One Man, Two Guvnors starring James Corden.

Globe on Screen 1 & 2: 30 productions performed live at the Globe Theatre in London, from 2008 to 2018. Highlights include Mark Rylance’s award-winning performance as Olivia in Twelfth Night, and the rarely produced Henry VIII and Two Noble Kinsmen.

All these resources and many, many more can be found through the Marriott Library’s databases directory. (Note: Access is limited to those with a current UofU ID and password.)