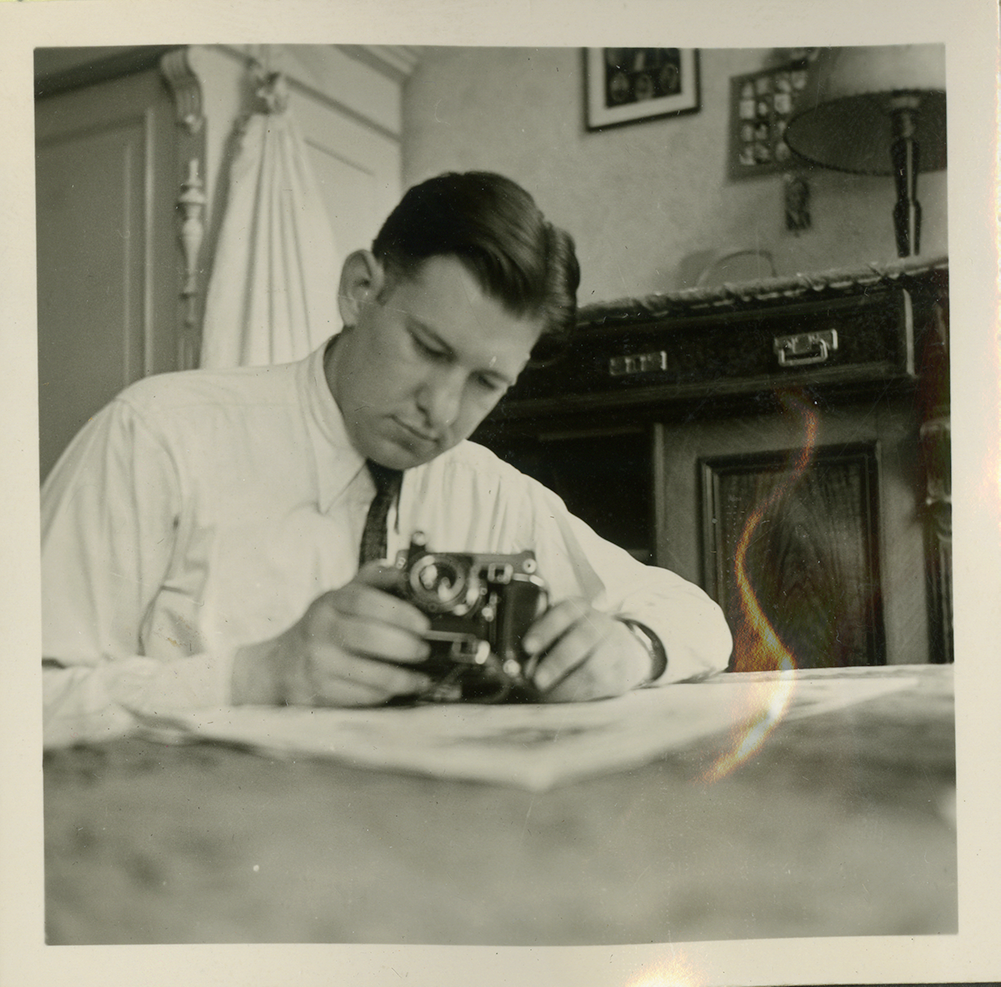 The Manuscripts Division in Special Collections recently acquired a collection of papers and photographs documenting the life of Hyrum Jenkins Smith*.

Smith was born in Salt Lake City on October 18, 1914. His life might have been lived in the ordinary, unremarkable sort-of way that most experience. However, in 1935 Smith was sent by the Church of Jesus Christ of Latter-day Saints (LDS) to serve a mission in pre-war Germany.

During this two-year tenure, Smith frequently wrote to his family back in Utah. Naturally, the letters reported on his missionary pursuits. As one might imagine, his notes also included observations of what life was like living under Nazi dictatorship.

In the early letters he sent, Smith responded favorably to living under the Nazi regime. He wrote about his initial approval of Hitler’s military and economic policies, such as the rearmament of the Rhineland.

According to the collection’s biographical note:

“He agreed ‘wholeheartedly’ with the Fuhrer’s argument that the German nation had a right to defend itself from potential foreign aggression and was convinced that Hitler was not preparing for a war against his adversaries. Deeming the end of the “Nazi Four Year Plan” as a success, Smith stated ‘the streets are certainly beautiful with the party flags flying from nearly every window.’”

However, this mindset of Smith’s gradually shifted. Eventually controls over the LDS missionary work were imposed. Street meetings, proselytizing, and use of the radio and posters to promote the Mormon church were prohibited. Smith surmised that for many German citizens, the Nazi regime had come to be their new religion. As Hitler’s campaigning against various religions became stronger, Smith became increasingly worried about the future of the LDS Church in Germany.

After Smith finished his mission, he completed his bachelor’s degree at Brigham Young University, married, and then in 1941 he joined the U.S. armed forces. He eventually found himself back in Europe, this time serving in the military. Fortunately Smith had his camera with him both before the war and after, and he recorded a good deal of history, which now resides in scrapbooks in Special Collections.

These incredible images, along with the letters he wrote to his family, are contained in the collection and can be found by visiting the Special Collections Reading Room on level 4 of the J. Willard Marriott Library. For more information, contact Special Collections at 801-581-8863.

*NOTE: Smith was the great-grandson of Hyrum Smith, who was the brother of Joseph Smith, Jr., first President of the Church of Jesus Christ of Latter-day Saints (LDS).

Photos taken before the war:

Photos taken after the war: