Posted at 12:30h in Book of the Week, Rare Books by lyuba 0 Comments
0 Likes
Share 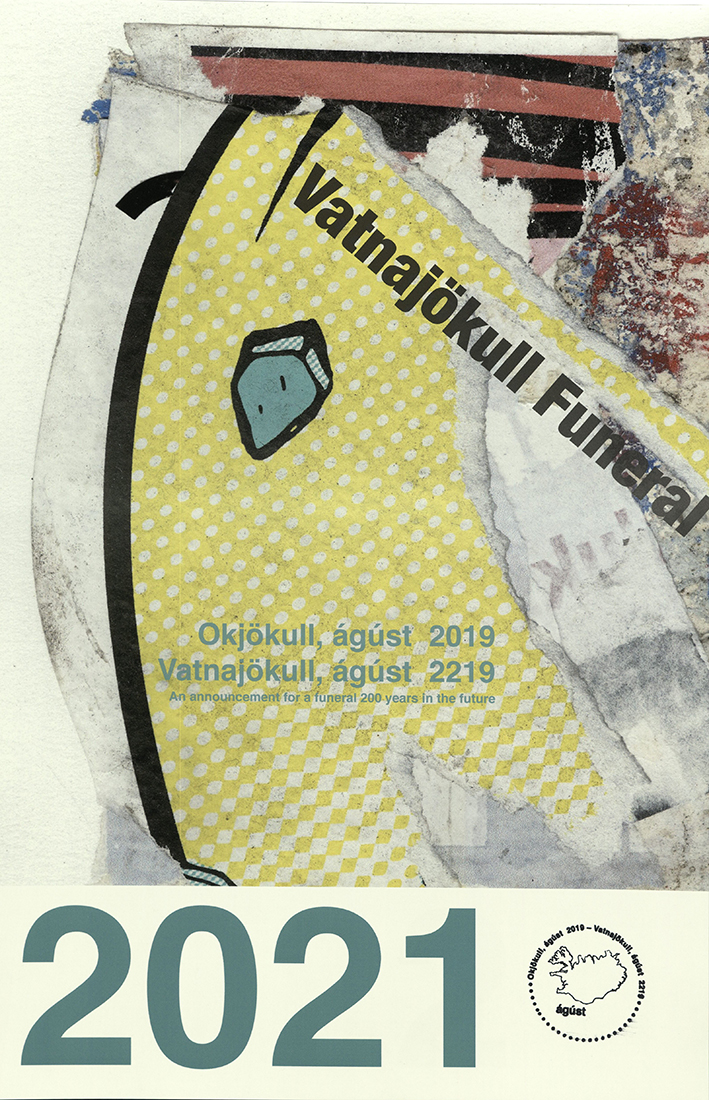 “OK is the first Icelandic glacier to lose its status as glacier.
In the next 200 years all our main glaciers are expected to follow the same path.
This monument is to acknowledge that we know what is happening and what needs to be done.
Only you know if we did it.”

On August 18, 2019 a group of scientists gathered at the top of Ok volcano in Iceland. They weren’t weren’t there for a research project, but rather a memorial. And they weren’t alone. Among the scientists were mourners who came to remember the now “deceased” glacier, Okjökull. Also in attendance were Iceland’s Prime Minister, Katrin Jakobsdottir; the Environment Minister, Gudmundur Ingi Gudbrandsson; and the former Irish President, Mary Robison. During the ceremony, a plaque was laid carrying a message to the future. 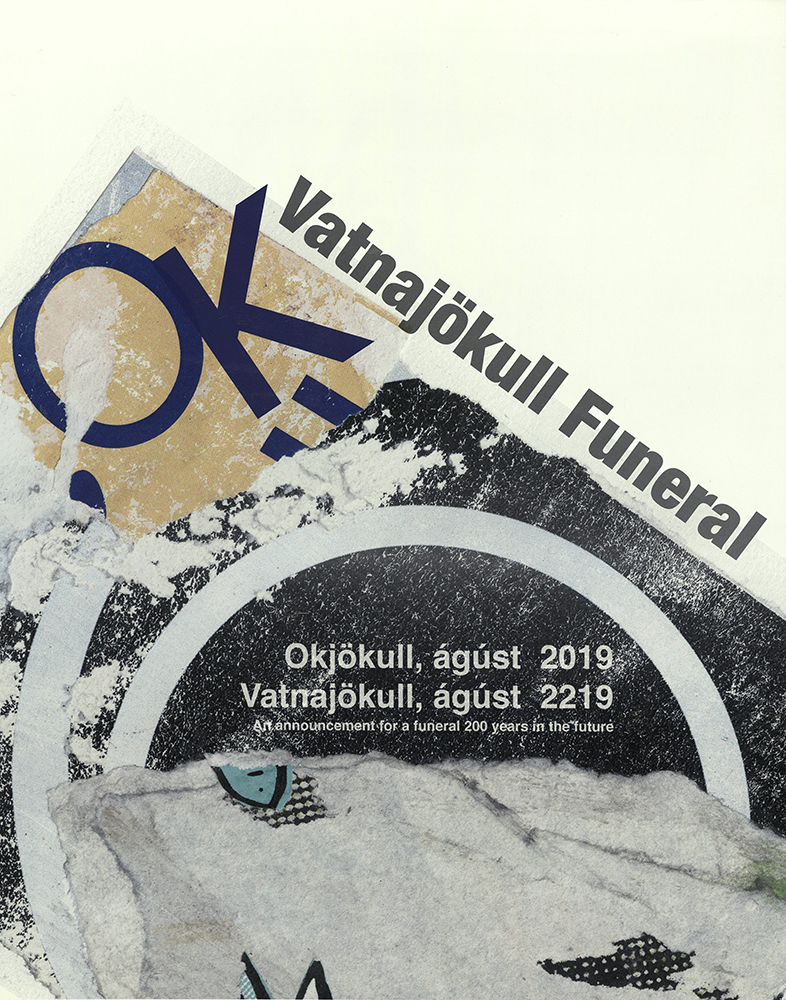 Although the “funeral” took place in 2019, Okjökull glacier was declared dead five years earlier. Oddur Sigurdsson, a glaciologist at the Icelandic Meteorological Office, had been taking photographs of Iceland’s glaciers for some fifty years. As early as 2003, he noticed that on Okjökull the snow was melting before it could fully accumulate. This meant that the glacier was no longer thick enough to stay alive. It was not moving. It was “dead ice.” His theory was confirmed when he visited the glacier in 2014 and found that Okjökull had shrunk to less than 40 meters thick, or the pressure limit which allows the glacier mass to move.  Despite enlisting an Icelandic broadcaster to officially report the death of Okjökull, it did not result in much media attention. 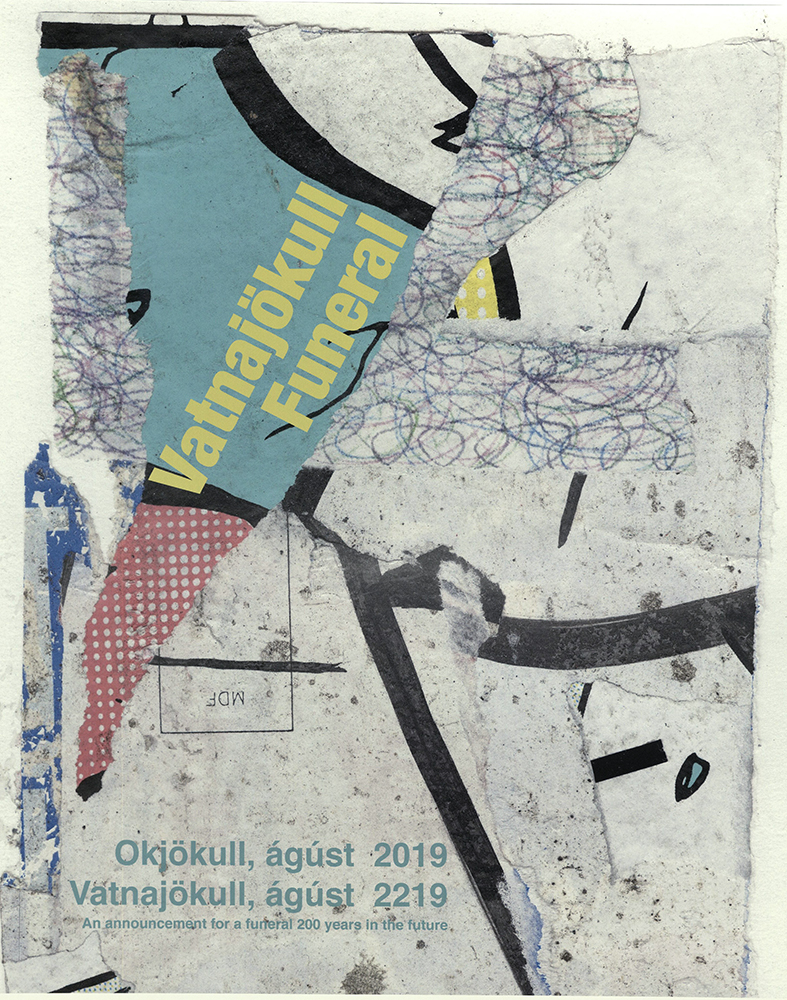 Several years later, anthropologists from Rice University, Cymene Howe and Dominic Boyer, arrived at Okjökull’s remains to embark on what they called the “Un-glacier Tour” — a guided hike to the top of Ok volcano that was “meant to be a reckoning with glacial demise as well as a celebration of glacial life.” The Un-Glacier Tour and a documentary film titled, Not Ok, described the events of the glacier’s death: melting down from 5.8 square miles to just 0.386 square miles, or 6.6% of its original mass. Inspired by their experience, Howe and Boyer decided to create an official memorial. 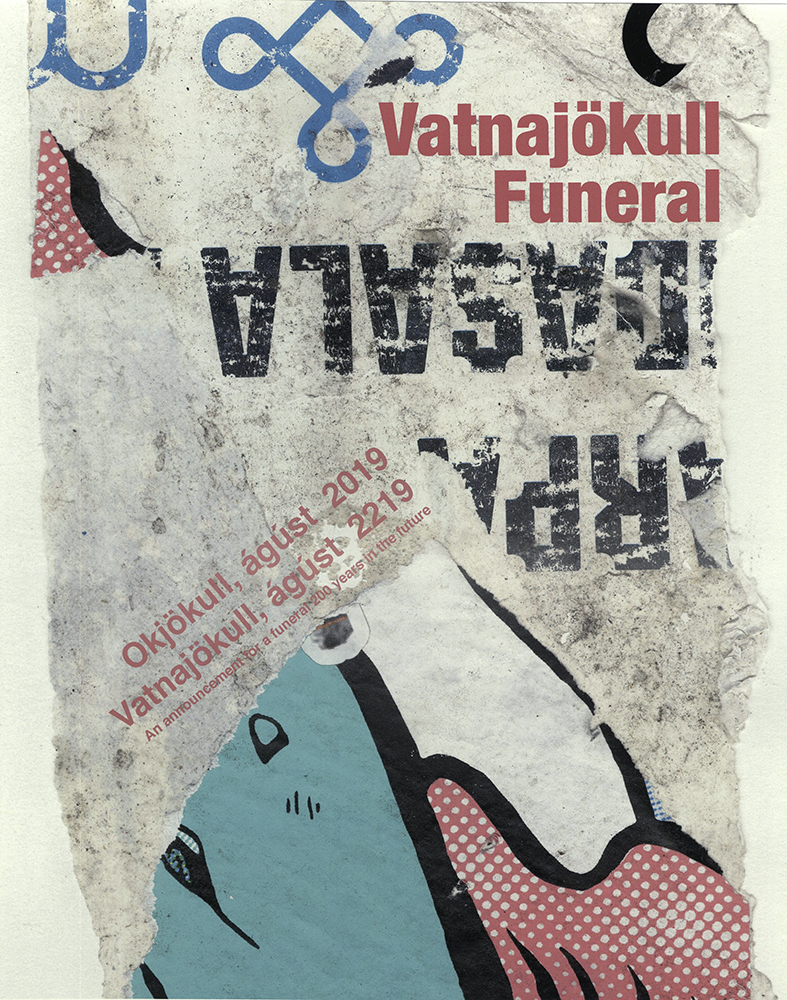 A bronze plaque cast by Icelandic metal worker, Gretar Mar Porvaldsson, was laid at Ok volcano. An inscription was written in Icelandic by author and poet Andri Snaer Magnason, along with a translation into English. It read:

A letter to the future

Ok is the first Icelandic glacier to lose its status as a glacier.

In the next 200 years all our main glaciers are expected to follow the same path.

This monument is to acknowledge that we know what is happening and what needs to be done.

Only you know if we did it.

The text concludes with “415ppm CO2,” the ratio of greenhouse gases on Earth recorded in May 2019. 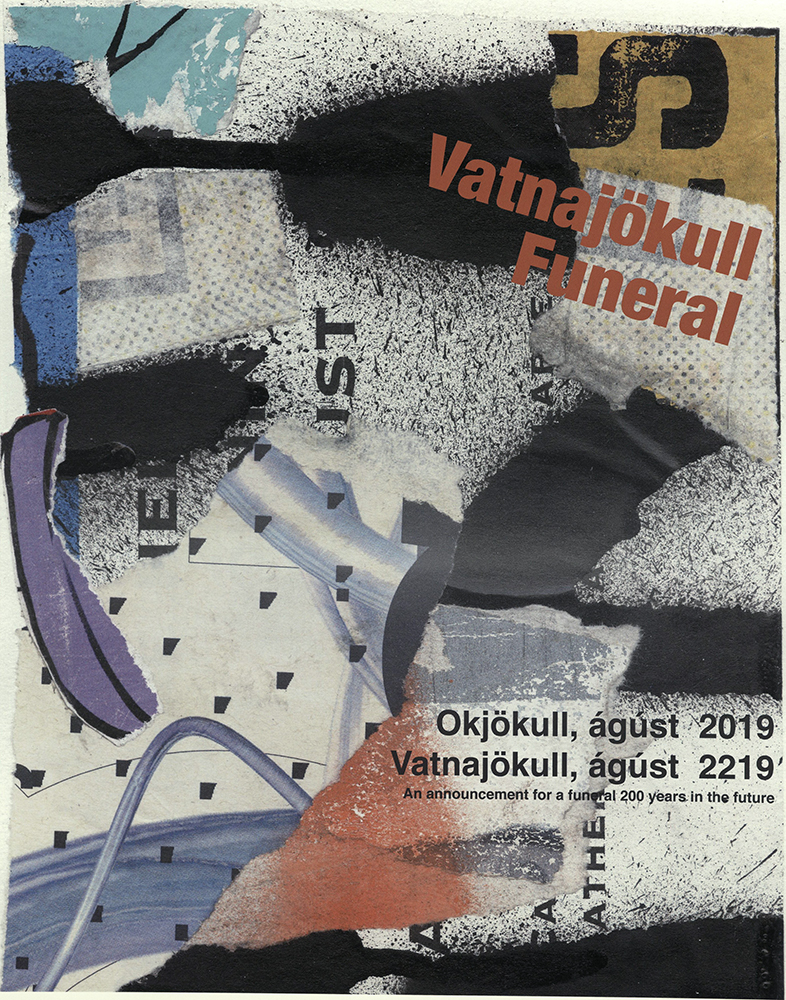 When this unique “funeral” for Okjökull was held in August 2019, an artist collective had come together for an unrelated meeting in Reykjavik. Melanie Mowinski and Joseph Ostraff were part of that artist collective and, for them, the ceremony at Ok volcano made a deep impact. It inspired them to create another memorial for yet another glacier — Vatnajökull.  Vatnajökull is Iceland’s largest glacier, covering approximately eight percent of the country, with an area of more than 3,000 square miles, or about 7,900 km2. Vantajökull National Park, which encompasses all of Vantajökull and the extensive surrounding areas, had been declared a UNESCO World Heritage site just one month before the funeral for Okjökull. Perhaps this was a preliminary attempt to protect it from the inevitable… Vatnajökull was not yet dead but, as experts have predicted, it likely will be within the next two hundred years. 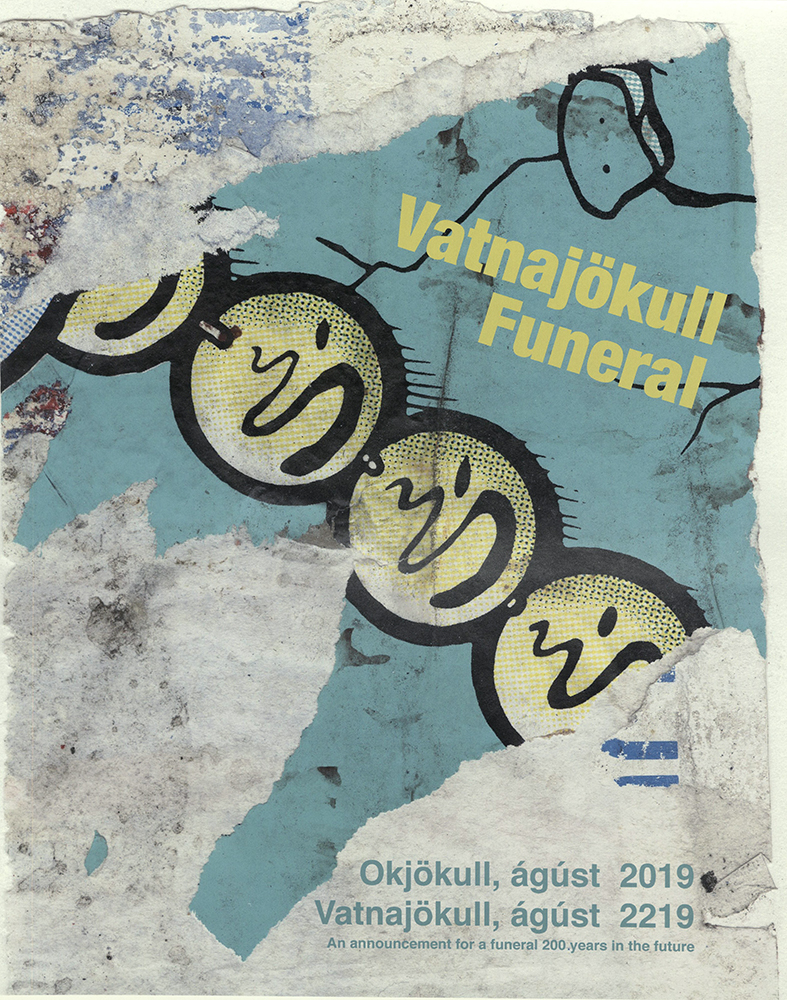 Melanie Mowinski (Massachusetts College of Liberal Arts) and Joseph Ostraff (Brigham Young University) worked together to create “an announcement for a funeral 200 years in the future.” Using material collected in downtown Reykjavik in August 2019, a series of collage posters were made to announce the inevitable death and funeral of Vatnajökull. The rare books collection at the Marriott Library is the owner of one of twelve sets of posters, two-hundred posters per set, one poster for each year leading up to 2219. The sets were distributed to institutions both in the United States and internationally to participate in the performative act of announcing the death of Vatnajökull each year — until the actual death of Vantajökull, or until there is a reversal in the current climatic trend. 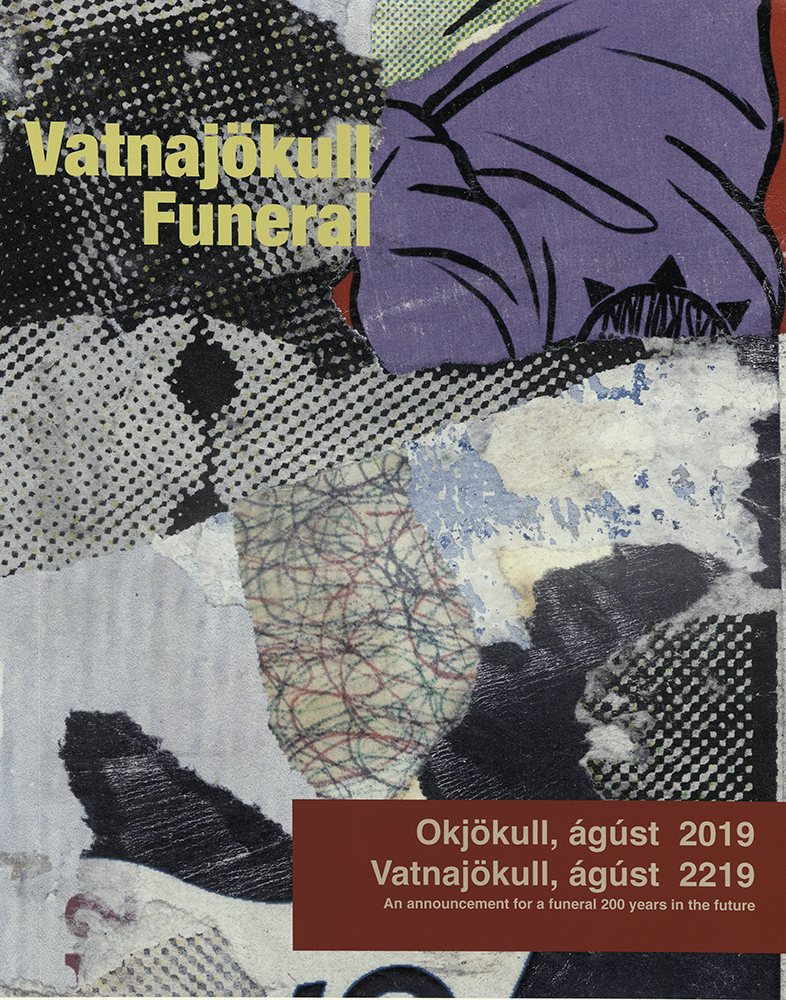 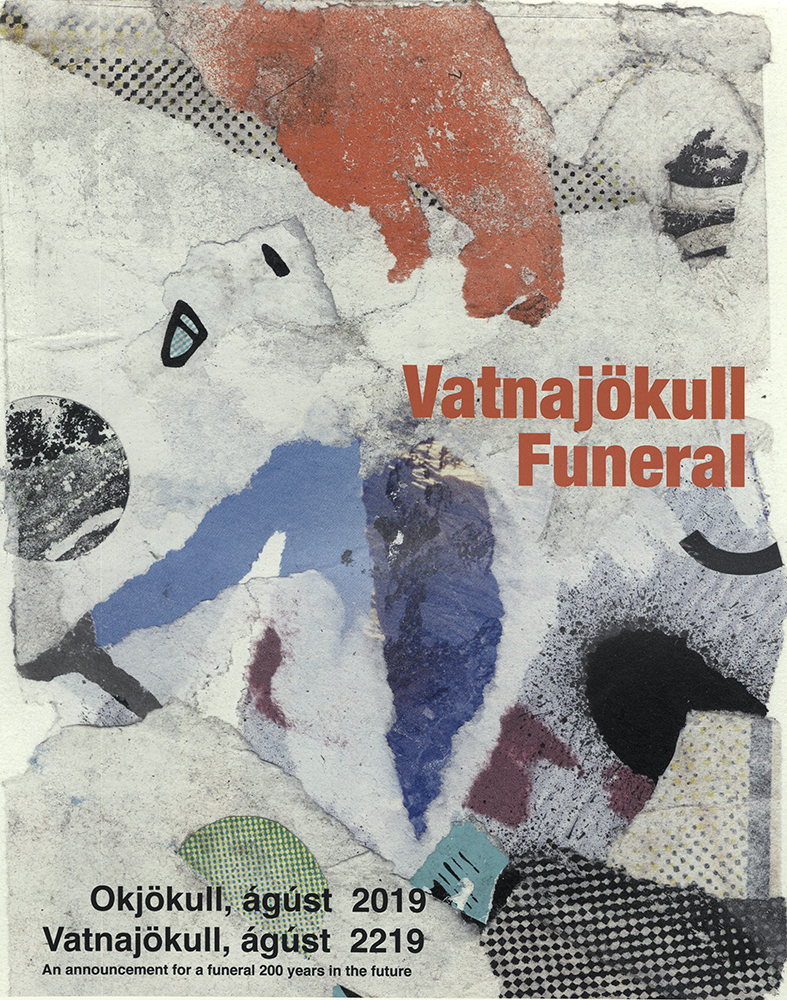 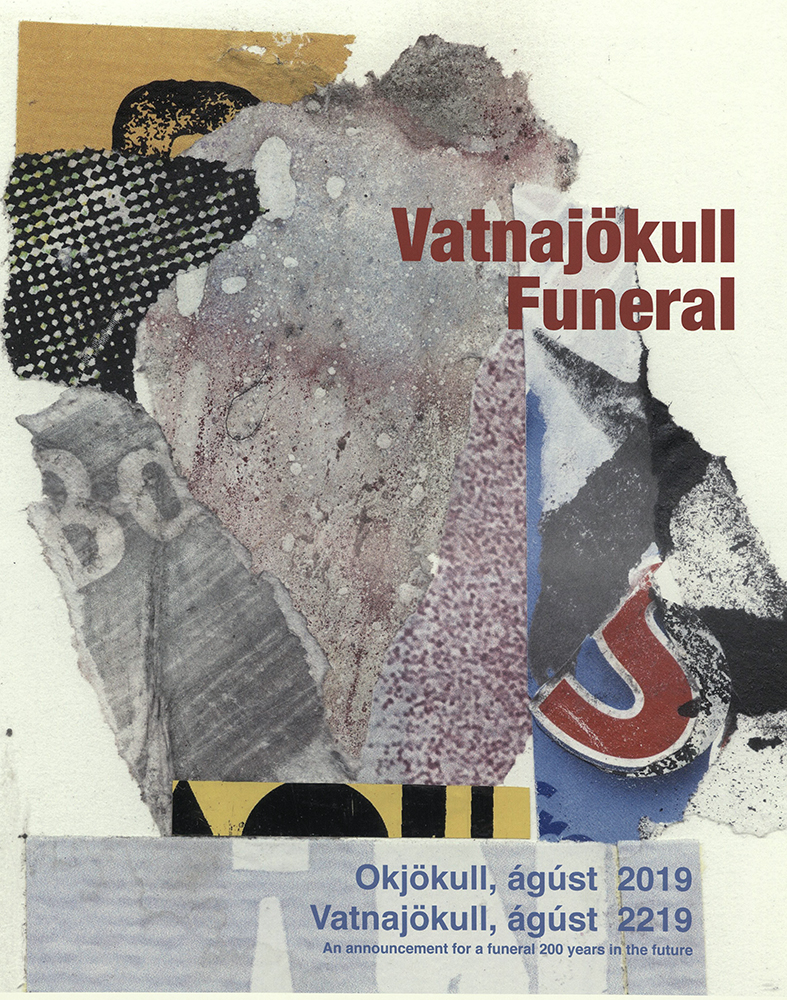 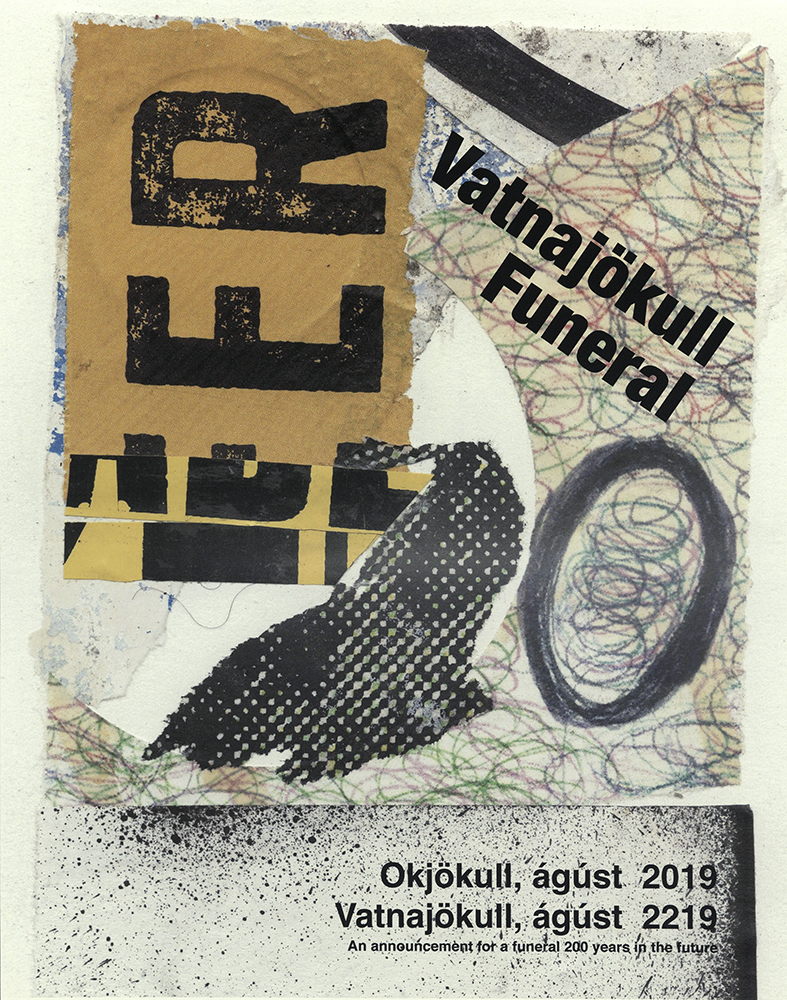 The Rare Books department at the J. Willard Marriott Library is honored to be the steward of this set, encouraging the creation of conversation and activities about the evolution of environmental health.