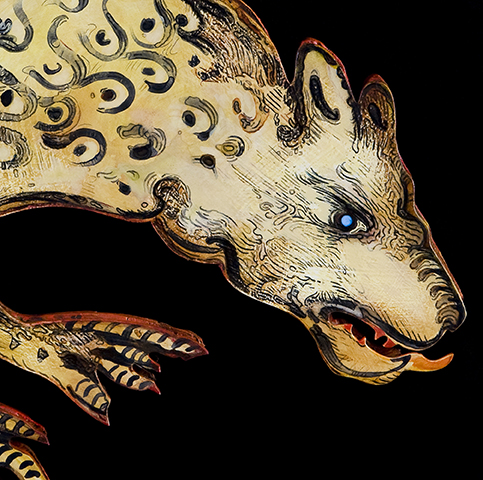 This has been the summer of dreamlike beasts and whimsical critters. At long last, Red Butte Press kicked off production of its latest fine press edition, Stranger & Stranger, by Maureen O’Hara Ure and Katharine Coles. With its winding history and deep roots stretching back over a decade, the book has been a long time coming. The collaboration on this project between artist Maureen O’Hara Ure and poet Katharine Coles dates to a proposal submitted to the Red Butte Press in 2004. Envisioning a series of images and poems that would probe the links between animality and humanity, mythology and modern science, and the multiple ways in which the human subject extracts/alienates his or herself from the natural world, here’s how the two collaborators spoke of their work-to-come:

Rather than a format in which words explicate images or images illustrate words, we will work toward an integration of the two, in which images and words speak to and through each other, creating a whole greater than the sum of the parts.  For our sources, we will draw on, elaborate, and graffiti over the history of animal images in literature and arts, linking to that history but not reproducing it.  We will also rely on our own encounters with animals both homely and nonhomely (from the dog in the bed to the oriole—or thieving raccoon or pilfering hawk—at the bird feeder to the moose or cougar appearing like an apparition in the winter garden or on the canyon trail) and on the messages transmitted from our waking and sleeping dreams.  As animal images have always incorporated drolleries, eccentricities, and grotesques, so our mutant animals will express our own visions, at once playful and monstrous, dreamy and nightmarish.

Design work on the project commenced in 2014 and now, two years later, with the incubation period over, we’ve started laying ink across paper. In the posts to come, we’ll be displaying the process work involved in the making of Stranger and Stranger: from initial concepts and design iterations, through the letterpress printing and hand-bookbinding stages, to our post-production work culminating in the book’s launch.