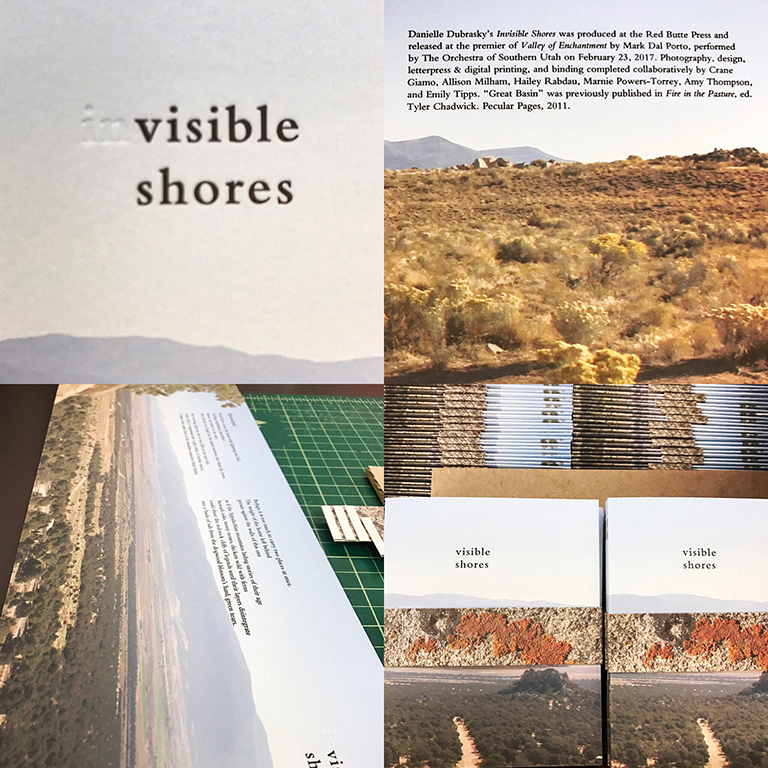 Danielle Beazer Dubrasky’s poetry has been published in Pilgrimage, Sugar House Review, Salt Front, Cave Wall, Contrary Magazine, and Quill&Parchment. Her poems were also published in a limited edition art book Invisible Shores by Red Butte Press of the University of Utah. Her chapbook Ruin and Light won the 2014 Anabiosis Press Chapbook Competition. She has been a finalist for White Pines Press, a semi-finalist for Backwaters Press and Elixir Press, and a fellow at the Virginia Center for Creative Arts. She is also a two time recipient of the Utah Arts Council first place award in poetry. She is the poetry editor for Contemporary Rural Social Work journal and has developed a curriculum of poetry writing exercises to be used in poetry therapy groups. Danielle is both an associate professor of Creative Writing at Southern Utah University and the director of the SUU Tanner Center for Human Values. She grew up in Charlottesville, Virginia, but has lived the last 20 years in southern Utah. As a Virginia native but a long-time resident of Southern Utah, I have written many poems layering the southern landscape of my childhood against the high desert of Cedar City outside my front door. When the Orchestra of Southern Utah commissioned composer Mark Dal Porto to write an original composition inspired by the National Parks, he requested that the OSU contact a poet whose work reflected the landscape of the local region. I corresponded with Dal Porto, sending him poems with imagery of the Great Basin that surrounds Cedar City, and he subsequently selected poems he thought would work best. I listened to his composition, pulled short excerpts from my various poems, and matched them to specific moments in the piece.

The compilation of the poetic fragments that correspond to Valley of Enchantment by Mark Dal Porto is unique to that collaboration. However, I thought it was important to have some of the original key poetry also available–thus, the beautiful artists’ book by Red Butte Press, Invisible Shores. Two poems that Dal Porto selected are published in their entirety in Invisible Shores: “Great Basin” and “Metamorphic.” The title of the book refers to the Permian sea that once covered much of the southwest, traces of which exist in the Great Basin through sedimentary rock and fossils. However, it also alludes to my own experience of leaving behind the east coast after my father’s death when I was 18 and moving to the desert. Utah-based artist Marnie Powers-Torrey, another “transplanted” southerner having grown up in South Carolina, brought her own sense of place to the images. And she unexpectedly documented a moment in Cedar City history–the Shirts Canyon wildfire that burned 1500 acres in October 2016. These poems are part of a larger manuscript that explores the intersections of Utah geology, communal history, and personal narrative. This collaboration of art and poetry has inspired me to expand further the idea of landscape and metaphor–what lost places do we carry in our memory that transform into symbols over time? Danielle Dubrasky’s Invisible Shores was produced at the Red Butte Press and released at the premier of Valley of Enchantment by Mark Dal Porto, performed by The Orchestra of Southern Utah on February 23, 2017. Photography, design, letterpress & digital printing, and binding completed collaboratively by Crane Giamo, Allison Milham, Hailey Rabdau, Marnie Powers-Torrey, Amy Thompson, and Emily Tipps. “Great Basin” was previously published in Fire in the Pasture, ed. Tyler Chadwick. Pecular Pages, 2011. The deluxe edition of Invisible Shores includes a slip-case and a CD with a recording of the Orchestra of Southern Utah performing Valley of Enchantment, composed by Mark Dal Porto, reflecting imagery from Danielle Dubrasky’s poems.