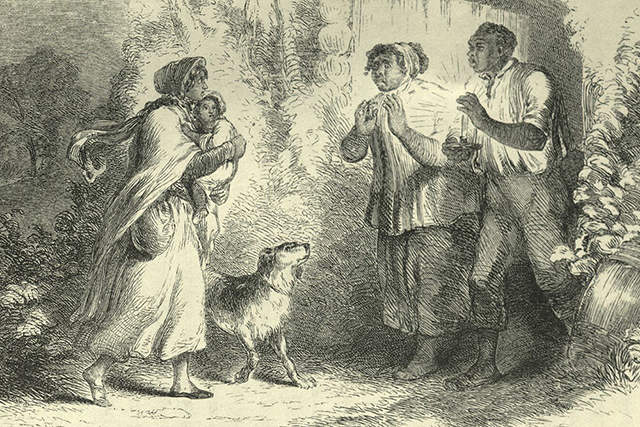 When Harriet Beecher Stowe conceived Uncle Tom’s Cabin during the early 1850’s she was living in Cincinnati, Ohio, at the time part of the western frontier. Living in Cincinnati, directly across the Ohio River from the slave state of Kentucky, Stowe was exposed to fugitive slaves and often heard firsthand accounts of the horrors experienced by formerly enslaved people. Sympathetic to their suffering, she wrote Uncle Tom’s Cabin to expose the tragedies she was hearing about and included many aspects of the firsthand accounts she had heard into the story.

In her concluding remarks Stowe assures us the story is based on true events. She wrote,

“The writer has often been inquired of, by correspondents from different parts of the country, whether this narrative is a true one; and to the inquiries she will give one general answer.

The separate incidents that compose the narrative are to a very great extent authentic, occurring, many of them, either under her own observation or that of her personal friends. She or her friends have observed characters and the counterparts of almost all that are here introduced; and many of the sayings are word for word as heard herself, or reported to her.”

Stowe’s story from the backwoods of the western frontier became immediately successful throughout the country and quickly thereafter throughout the Western Hemisphere. Initially released as a weekly serial in a newspaper called The National Era from June 1851 to April 1852, Uncle Tom’s Cabin was then printed by John P. Jewett and released March 20, 1852. It sold 3,000 copies the first day, 10,000 copies in the first week, and in the United States 300,000 copies the first year. In Great Britain 200,000 copies were sold the first year, with sales there reaching 1.5 million copies after only a few years. Many of these were infringing, or pirated, editions, having been printed and sold without permission by the copyright owner.

In today’s terms we would say Uncle Tom’s Cabin went viral overnight. Stowe ignited a spark with her writing that caused flames to rise on multiple continents. Her novel brought compassion to the heated economic debate already centuries old, an emotion many had worked hard to suppress. The pen and paper Stowe put to incredible use in a city on the edge of the American frontier played an unquestionable role in history. Ten years after the novel’s publication, when U.S. President Abraham Lincoln met Stowe in 1862, he remarked, “So you’re the little woman who wrote the book that made this great war!”

Stowe’s concluding admonition in the novel’s final comments is a strong rebuke on the nation and, as seen by the popularity of Uncle Tom’s Cabin in Great Britain, was found completely fitting for application on the world at the time as a whole. She wrote,

Harriet Beecher Stowe wrote Uncle Tom’s Cabin as a critique on the most divisive topic of her time more than one hundred and sixty years ago. Holding these historic editions and reading these words helps us to realize that even after all this time there is a great deal left to accomplish in protecting justice and mercy. Little wonder millions of copies of Uncle Tom’s Cabin have been sold; perhaps a few million more need to be.