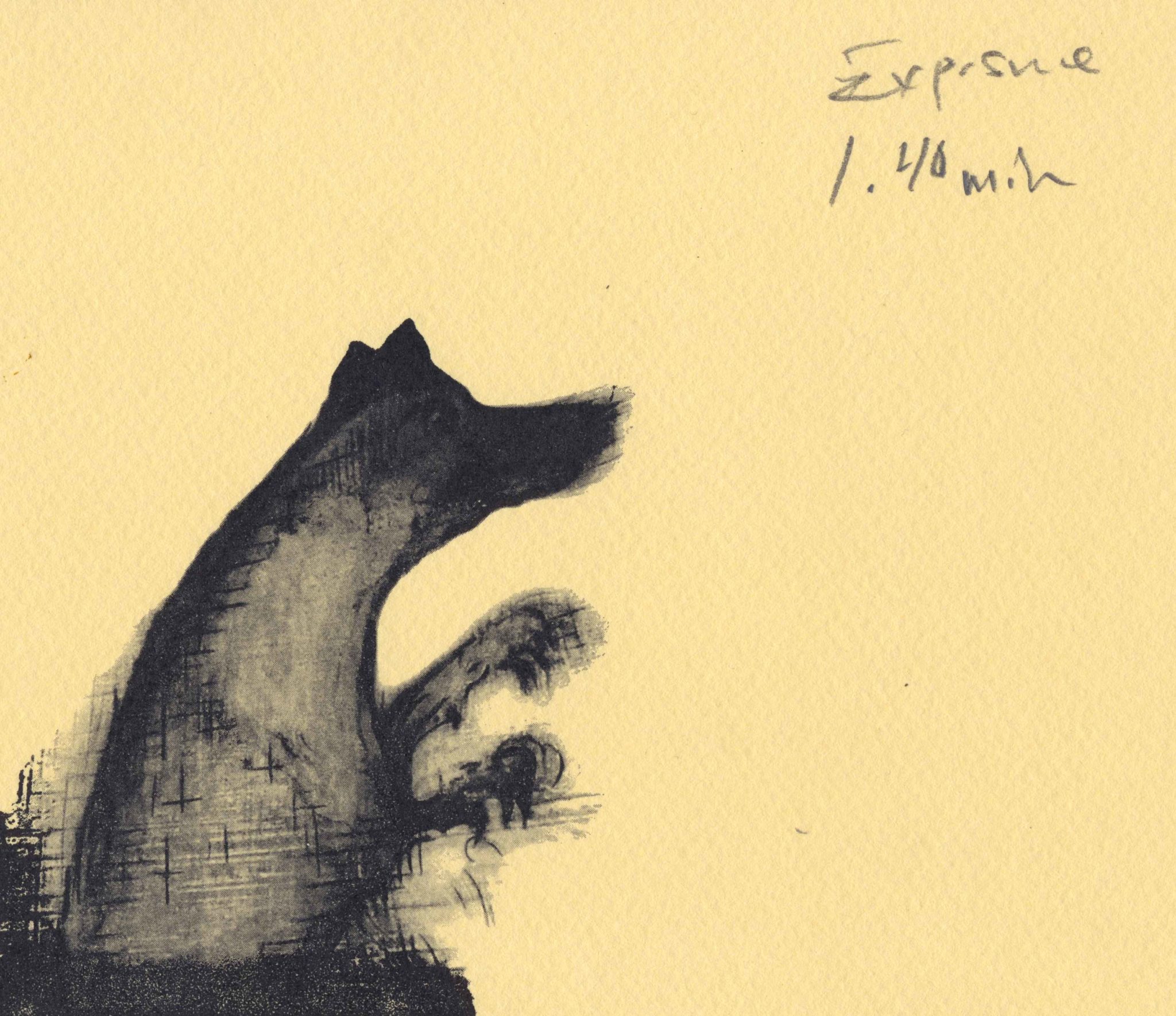 21 Nov Marnie Powers-Torrey on the Space of Intermedia

Marnie Powers-Torrey holds an MFA in photography from the University of Utah and a BA in English and Philosophy from Boston College’s Honors Program. She is the Managing Director of the Book Arts Program and Red Butte Press, Associate Librarian, and faculty mentor for minor and certificate students in book arts. Marnie teaches letterpress printing, artists’ books, and other courses for the Book Arts Program and elsewhere. She is master printer for the Red Butte Press, printing with a staff of excellent printers. Marnie is a founding member of the College Book Arts Association, and her work is exhibited and held in collections nationally. What are the main differences/challenges in translating Maureen’s paintings into polymer plates, as opposed to translating other art media? My interests live in between things— ideas, techniques, systems, people. Intermedia, as Dick Higgins so aptly named this space. Thus, the challenge to translate Maureen O-Hara Ure’s layered and textured paintings to relief prints is a welcome one, though a definitive challenge to be sure.

When working with a line drawing, there really is no translation— a slight shift in dialect, perhaps, but essentially what you scan is what your letterpress print will say. If the drawing is in charcoal or a variety of ink concentrations, then the system is no longer binary— grays are introduced onto the scene.

Relief printing is binary. To relief print this type of drawing, we need a plate that functions as binary but LOOKS like it has a range of tonal values.

The same methodology can be applied to photographs, which depend on a comparison of tones to be legible. The lower the contrast, the greater number of values represented and necessary to read the image. By increasing the contrast, we decrease the number of tonal values and move the image closer to a binary system.

As a photo-printmaker, I’ve been attempting to satisfactorily convert a graded tone to a binary system for years, with some successes and some less impressive results. In the late nineties and over the digital bump of the year Y2K, I used halftone screens, traditional or with a stochastic pattern, to produce ortholitho negs in a darkroom. These contact negatives were then used to expose an intaglio or relief plate. This process felt very direct and logical, the only real technical variable during pre-press being the length of the exposures (35 mm film to sheet film; sheet film to plate).

In the digital realm, Photoshop provides seemingly limitless options for altering an image. However, I find the bitmap filter (screen) options limiting and disruptive. So my plan of attack is to get right at the core of the image, distilling the image to it’s most condensed value range while maintaining its legibility. Here is where the translation happens, inevitably causing a loss of information, but attempting to move toward a common language that articulates the image as clearly as possible both on the screen and the projected plate/print. I save each file with a breadcrumb trail, as you called it, to allow me to take steps backwards as trials require. My main tools are curves, brightness and contrast, and all kinds of erasers. How do you know where the Stranger and Stranger images will appear in relation to the text? I’ll fess up to my comfort in the physical world. I prefer working creatively through manipulation of physical materials. I view the image through the screen until my eyes begin to blur the bits, and then I print a draft, grab a scissors and glue stick, and sit down with a mockup of the text. This long-term project began a number of years ago. Former RBP Creative Director David Wolske designs the text and cover with a preliminary layout of the imagery, in conjunction with BAP lead binder Emily Tipps, the poet Katharine Coles, Maureen, and me. The process has continued to be fluid, and I am now working directly with the artist, Maureen, and fellow BAP/RBP staff to make final decisions on the translation and placement of the imagery. Can you talk about the “hard-edge” in letterpress printing and how that relates to the translation of artwork into a plate suitable for letterpress printing. Great point— or multiplicity of points as is our challenge with a bitmapped image. And thus the next challenge. Relief prints focus our eye on the edge— the line between something and nothing, black and white. Letterpress in particular is a celebration of the point of impression, of the edge between the chasm and the plateau. Thus high contrast is ideal, but with a bitmapped image, the attention to the edge is highly problematic. Dirty. Bumpy. Raw. Smoothing the edges in photoshop is a delicate task when working with washes and paintings as the media often claim no definitive edge, and the effect can look artificial. The balance between a ragged and shaped edge or a natural and contrived edge is a matter of testing— small changes, new negs, test prints, assessment. Briefly describe how you and Maureen have approached this translation process for Stranger and Stranger. Are there many back and forths? Has she some firm lines-in-the-sand concerning her work? Etc….. Maureen and I have know each other for many years. She and Katharine Coles have known each other far longer, collaborating often. Katharine and the Red Butte Press have worked together on two previous projects. These relationships, and the fact that we are in one locale, all on campus, make collaboration more dynamic. Because the Red Butte Press staff is also the Book Arts Program staff, and in that book production and fine press work require concentrated time, the project has been a longtime in the making. Given the experimental nature of the image-making, multiple trials have also lengthened the production process. I believe this has allowed the project to grow with us, and is stronger as a result of the extended focus. During active phases, Maureen and I bat things back and forth through email until one of us decides that a sit down would better serve us. Maureen walks over with her black felt tip pen, and I supply the digital or letterpress proofs. Together, we charter unknown territory.