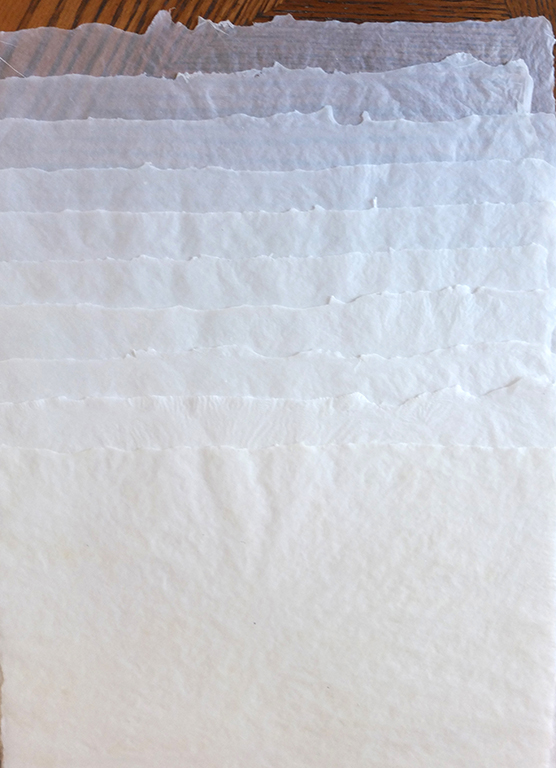 On Concept, Design, and Development

Tell us about an idea for a book which hasn’t yet entered the production stage. How did this idea originate? What influenced/triggered you? Tracing the idea from its embryonic form to the design stage, can you tell us how your idea has progressed through its various iterations? Are your mock-ups for this particular project designed digitally, in analogue format, a combination of the two? What do you foresee as a significant challenge when transitioning from the design phase to the production phase? Radha Pandey: The idea for the book I am currently thinking about originated during my residency at the Women’s Studio Workshop. I was in the studio everyday during the winter of 2015, and there was snow everywhere. Everything was covered in it. Every few days, some of it would melt, turn into ice; some of it would get muddied and start to make pools of watery, icy goop. There was such a stark difference between what was clean, fresh, untouched snow, and this dirty, muddy stuff that snow became. I started thinking about water and the multitude of forms it takes. I began to research ice, snow, glaciers, snowmelt, climate change—and the colour white. I toyed with this idea for a while. I thought about how snow is perceived as clean because it is white. I did a thought experiment: what if snow was black? Or orange? Would our perception of cleanliness be different? White would no longer seem clean, hospital and gallery walls would no longer be painted white. Early perception of purity went back before snow, to something more basic: to breast milk and semen. Something about seeing the expanse of land covered in a blanket of white must have triggered the same response of purity, cleanliness, and creation. How could this possibly tie-in to water, snow, ice, glaciers and climate change? I had to conceive of this as more than one book, and as more than one iteration. I enjoy solving these questions working in an analogue format.

The first step was research, which involved a lot of reading and a lot of conversation to deduce perceptions and reactions to certain ideas that seem commonplace.

(Ideas I found commonplace: White is clean. White turned brown is dirty. White in galleries and hospitals is sterile, but white in paintings means light and hope. White is the absence of colour, but other colours are visible because of the presence of white. Example: dirt is apparent on snow because it is white).

(Some of the more compelling work that I read and researched: Snow by Marcus Sedgwick; Walking on Ice: Munich-Paris, 23 November–14 December, 1974 by Werner Herzog; Vanishing Ice: Alpine and Polar Landscaped in Art, 1775–2012 by Barbara C. Matilsky; Chris Drury’s flat work; Andy Goldsworthy; Subhankar Banerjee; and paintings depicting glaciers and snow from a variety of artists working in the 1500s up to the 1800s, including Thomas Ender, Thomas Fearnley, William Bradford, Abraham Storck, Xavier Leprince, and Louis Lebreton). Example of a “polar vortex” by Andy Goldsworthy The second step was writing down this research and coming to a thesis that I wanted to focus on. At the moment I have settled on exploring firn as the focus of this book—essentially presenting the reader with a visual guide to this phenomenon—with few words, and mostly using paper and its qualities when beaten over time as image. Since the paper I plan to use ranges from opaque to highly translucent, I plan on using the placement of words to affect pace and narrative. The title I have tentatively settled on is the translation of an Old English word, fyrngemynd, which means “the memory of long ago,” which is what firn is.

The third step was to begin thinking about how these ideas would translate visually and what form they might take. There might be a materials test involved, as with this case. The first iteration of my idea was to show the build-up of something over time, like snow, or an icicle. I wanted to show this by having one complete image visible at the start of the book, but as the reader goes through it, every page turn would take her/him one step away from a complete image. In other words, each page holds a part of the image or text, and the next page is not complete without the previous. The second iteration was to illustrate the idea very literally and draw typical scenes where what was white was coloured black or orange. The third test I did was using highly beaten abaca. The paper from this fiber yielded the results I was after. Laid one on top of the other, it looked like layers of snow, or firn. This would work wonderfully as a material for this book. The challenge I currently face is how to make these two ideas into one visual whole that speak to the idea of water in its frozen forms, as well as the overarching theme of our perception of the colour white. I then came back to my last thought and pushed it further. Snow changing from solid to liquid—changing from white to clear. How could this be represented using just the material used to make the book, and using pacing and progression/page transition?

The abaca could be beaten at different times, and therefore yield different results. If I decided to colour this fiber, I could just pigment or dye it using one colour and it would change how it took on colour simply based on the beat time. This directly correlated to changes in states of the water. As the paper changes its state, so too does the water change its state in the progression of the book. Every 30-minute or hour of beat time could represent a layer of firn (a season). Similarly, it could represent a correlation to the rate of glaciation, and tie-in beautifully to the overarching theme.

Radha Pandey is a papermaker and letterpress printer. She earned her MFA in Book Arts from the University of Iowa Center for the Book where she studied letterpress printing, bookbinding, and papermaking with a focus on Western, Eastern and Islamic Papermaking techniques. Her artist’s books are held in 36 public collections including the Library of Congress and Yale University. Currently, Radha is working on an artist book that explores the perception of the colour white.