Posted at 12:00h in Book of the Week, Rare Books by lyuba 0 Comments
6 Likes
Share

“May your trails be crooked, winding, lonesome, dangerous, leading to the most amazing view…”
― Edward Abbey 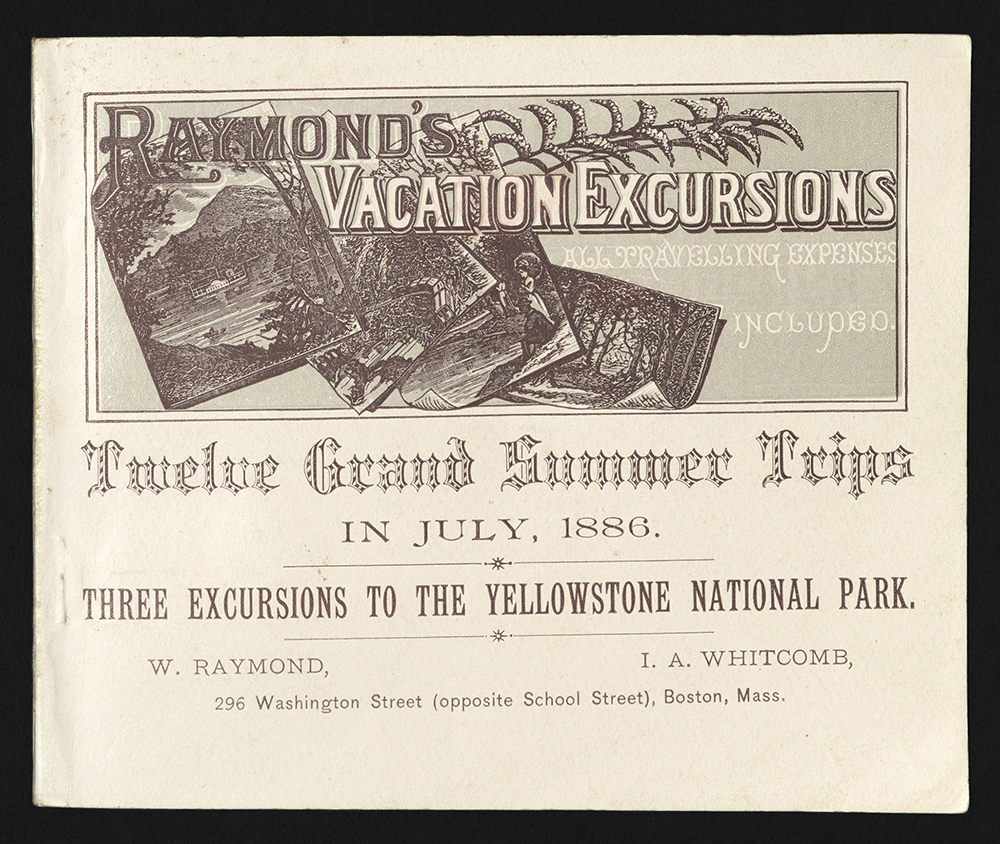 With the cost of gas, airline tickets, hotels and everything else, it seems like a challenging time to travel. How do you plan for the unexpected? Is it really possible to reserve a campsite months in advance? Do I need to bring cash? Among the questions you might ask yourself while planning a trip, have you ever thought about simply contacting a travel agency? In the high speed, high tech, modern world, travel agencies are on the decline, as are travel guide books. Trust me, I’ve looked. But for more than a century, agencies and guide books were the most common way Americans planned and booked their travels.

During the second half of the nineteenth century, the travel agent and the travel guide evolved with the growing number of Americans going on “vacation.” The first travel agency in the United States was established by the British-born Thomas Cook. Initially, Cook began his business in the 1840s, transporting temperance campaigners between various English cities via railroad. Soon after, he began to sponsor trips overseas. In 1869, Cook led a small group of Brits on a rail excursion from New York to San Francisco and, just two years later, decided to open a New York office so he could continue to lead trips to the West Coast. 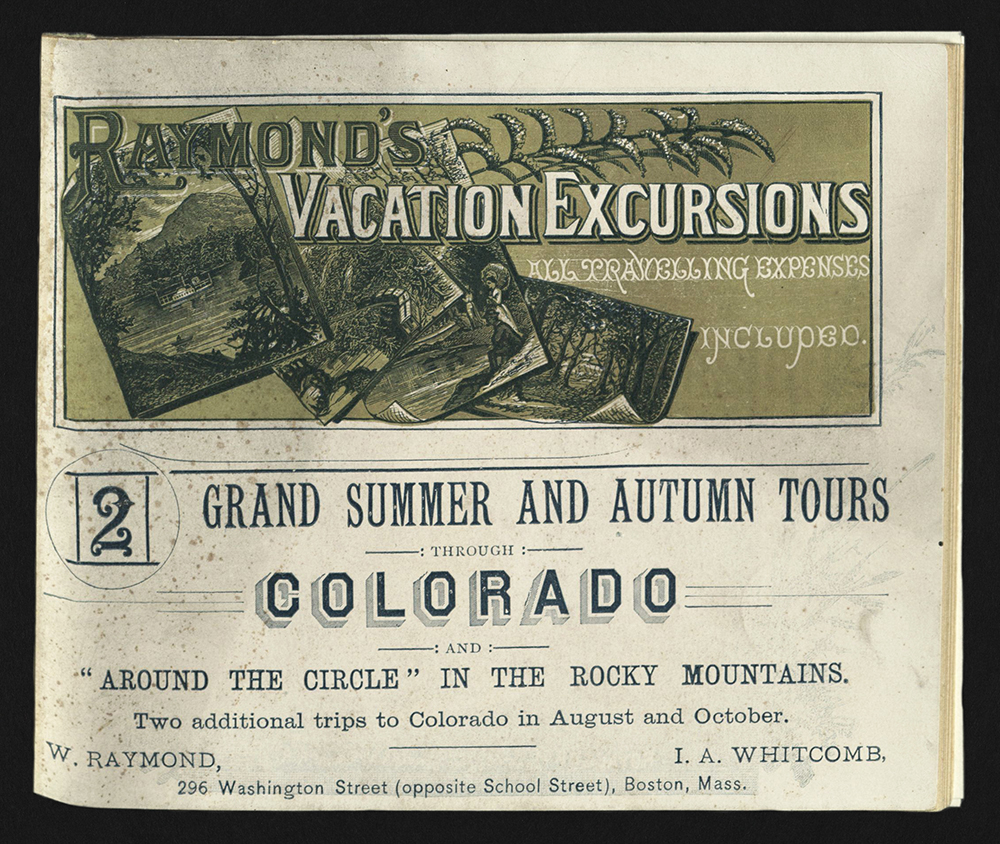 Although Thomas Cook might have been the first to establish a travel agency in the United States, others quickly followed. In Boston 1879, Walter Raymond and Irvine Whitcomb became business partners in what would become the gold standard for luxury travel during the  late nineteenth and early twentieth centuries. Their company, Raymond & Whitcomb Travel Agency, included top-of-the-line, private Pullman rail cars, first class service, and high class hotels, offering a sense of exclusivity and refinement.

Both men had come from the railroad business and had been long trained to understand the wants and needs of passengers. Whitcomb had previously worked with the Boston, Concord & Montreal railroad as a traveling agent and was known to be a hustler in conducting excursions to the mountains from different sections of the country. Raymond was the son of Emmons Raymond, president of the Passumpsic Railroad Company and one of the forty original stockholders of the Santa Fe Railroad. The younger Raymond held the position of General Agent of the Montreal & Boston Line. 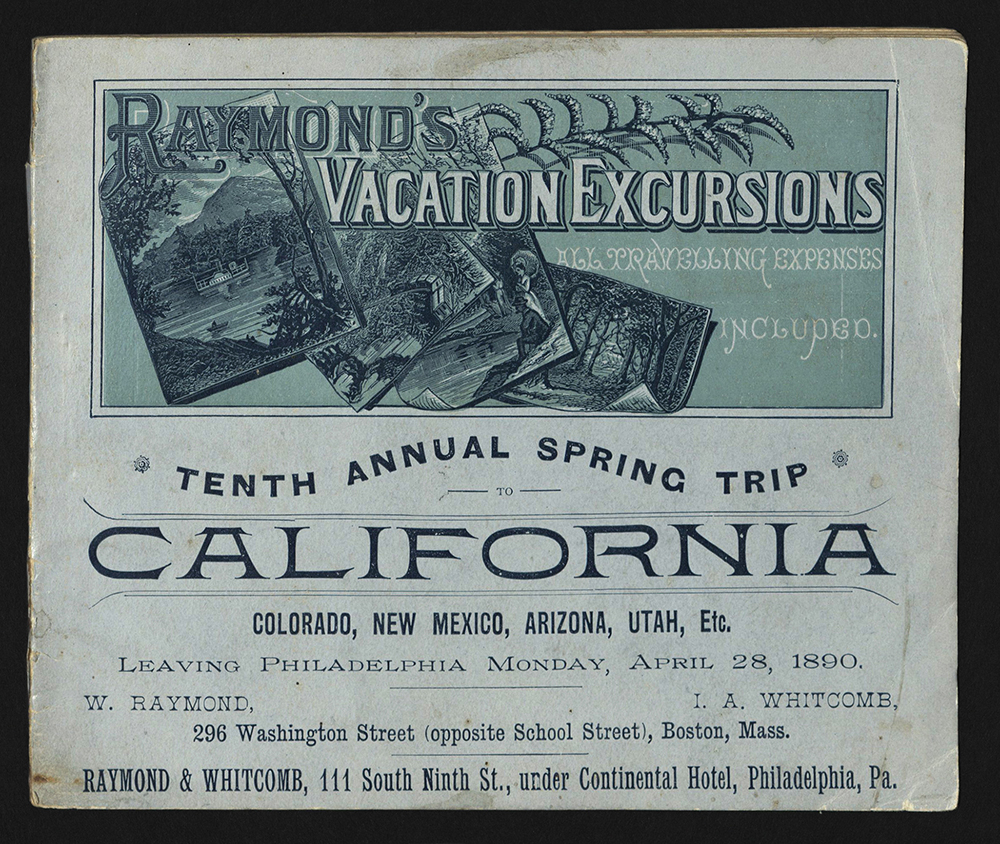 Raymond and Whitcomb began their travel agency by organizing tours to the White Mountains in New Hampshire, along with other northern resorts. However, they quickly recognized the demand that the expanding market of tourism was generating, and so they extended their influence to the leading railway lines. In turn, the railway lines were glad to extend their fullest cooperation. Within a short time, the small company grew to a large staff of assistants that carried out the details of the business. In addition, branch offices were opened outside the Boston headquarters  in key cities such as New York and Philadelphia. But as their excursions began to creep further and further west, offices were set up along the Pacific Coast in San Francisco, Los Angeles, San Diego, and Pasadena — where Raymond would build the first major resort hotel of the San Gabriel Valley.

The Raymond Hotel was built in 1886, mainly as a winter residence for wealthy easterners. It enjoyed nine successful winters before the original structure burned to the ground in 1895. A second hotel was opened in 1901 and was met with immediate success. The registry was filled with names of moguls from the East: Pullman, Schwab, Harriman, Swift, Armour, Rockefeller, Morgan, Carnegie, and R.T. Crane. The new facility had a larger foundation base, was more fireproof, and included 300 rooms, many with private baths, which was not a feature of the original. Despite its success, the hotel was foreclosed following the Great Depression and was later razed for commercial development. 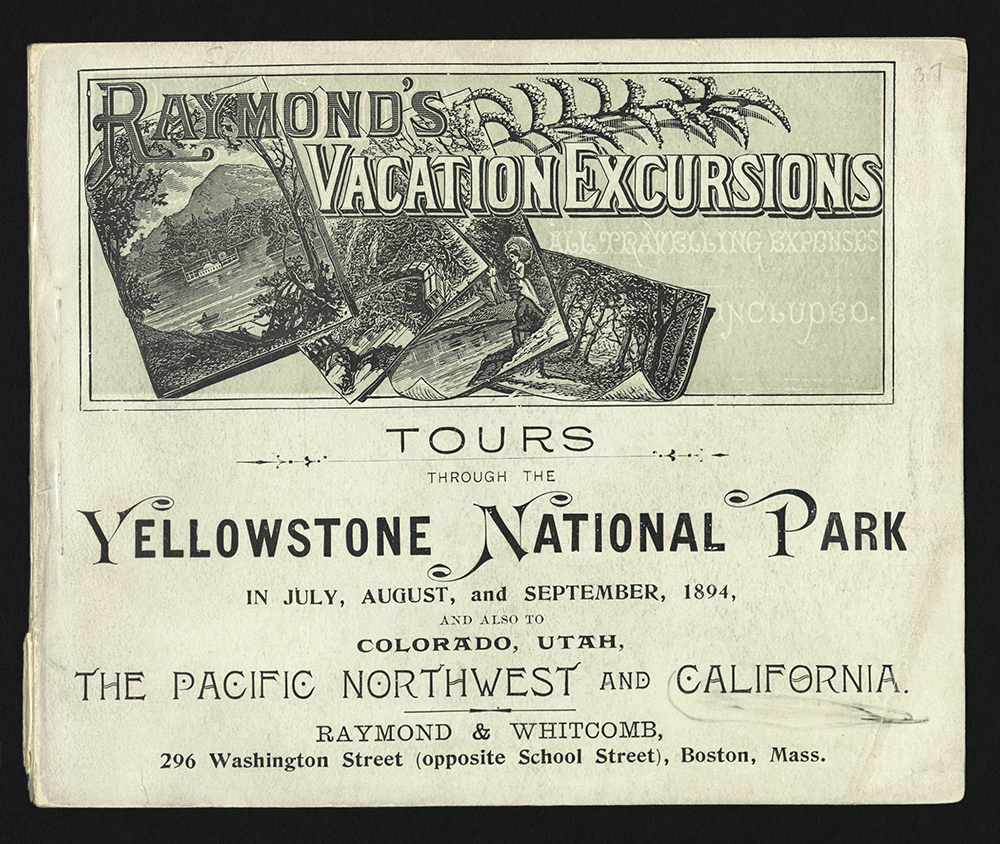 Though still expensive, the West became much more feasible after the completion of the transcontinental railroad in 1869. Raymond and Whitcomb offered their first western excursion in 1881. The tour lasted forty-four days with stops in Chicago, Omaha, Cheyenne, Colorado Springs, Ogden, Salt Lake City, and San Francisco. The all-inclusive trip cost $400.00 and included transportation, hotels, meals, and excursions, with tickets valid for ninety days — allowing guests to individualize their trips with detours into Oregon, Yosemite, Lake Tahoe, and Yellowstone.

The latter became one of the most popular destinations for Raymond and Whitcomb’s travelers and in 1888, Raymond and Whitcomb advertised three “grand trips” to the park of twenty-five days’ duration each. The price for such a trip was $275.00, or about the same cost as a trip to Europe. But despite the luxurious accommodations, the trip to Yellowstone included a rather grueling itinerary. Rarely did the group spend more than one night in the same place, and only on Sundays was neither touring nor travel planned. And although many tourists traveled in the beautiful and private Pullman cars, they could not avoid the heat and dust of the desert, and the inevitable discomfort that accompanied getting around the Yellowstone terrain. 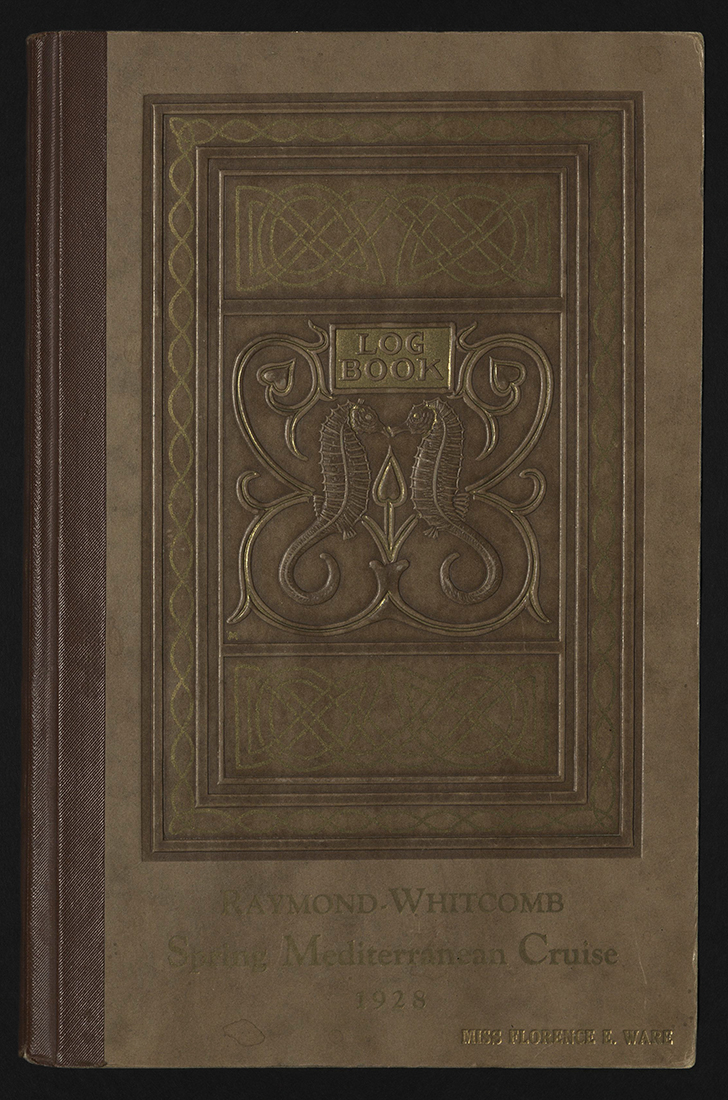 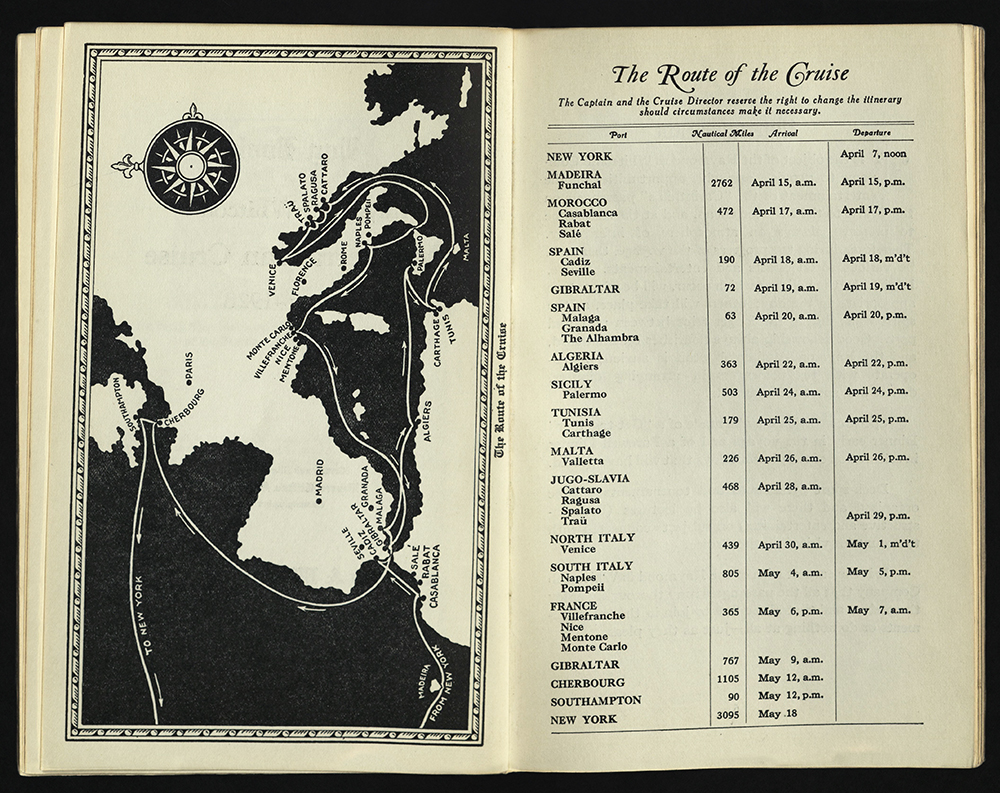 As an 1887 promotional pamphlet for Raymond and Whitcomb assured its public: “There need never be anxiety about the morrow, since every requirement has been made a matter of pre-arrangement. The excursionists are expected guests, and their places are held in reserve for them, so that there need be no fear regarding accommodations, and opportunities for sight-seeing under the most advantageous circumstances… Ladies traveling alone should have no hesitation about joining our tourist parties, since they are entirely relieved of the ordinary cares, responsibilities, and annoyances of traveling.”  According to one historian, women comprised the majority of many of Raymond & Whitcomb’s western tours.

Within the first twenty years of business, Raymond and Whitcomb had established 1,500 separate tours, carrying approximately 60,000 people. Of this great number, some 15,000 were carried across the continent to California. Tours outside of the United States were also organized. Raymond and Whitcomb added Mexico to their roster in 1885, Alaska and the Hawaiian Islands in 1886,  Europe in 1892, and Japan and China in 1895 — pioneering the “cruise.” Tours to the Bahamas, West Indies, and South American resorts were also included and, by the 1920s, the travel agency was offering cruises to the Mediterranean, around Africa, and many other parts of the world.