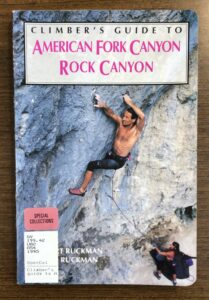 Merrill Bitter passed away on January 20, 2022, while backcountry skiing in Little Cottonwood Canyon. Bitter was an active rock climber, skier, and outdoor enthusiast. He was well-known for pushing rock climbing grades and always offering advice and assistance as a former REI manager and IME employee. These traits of respect, dedication, perseverance, and genuine helpfulness are reflected in both Bitter’s oral history and oral histories with other climbers.

Within the oral history with Bitter, he reflected, “We all admired each other.” Bitter also described that “IME to a larger extent is a much more intimate experience for a lot of people, I think, in the sense that you got a lot of one-on-one assistance… you tend to create a sense of community with your customers at the same time. People you know, always coming in, so there’s a real sense of community that develops around the shops…”

Evident in the Outdoor Recreation Oral History Project, Bitter was admired by others too. Stuart Ruckman stated, “probably  the  climber  who  at  that  time  had  the  biggest influence  on  us  was  Merrill  Bitter,  who  maybe  wasn’t  climbing  new  routes,  but  who  was climbing  at  a  level  that,  you  know,  we  could  only…sort  of  hope  to  aspire  to” (pg 8). Leslie Ellison stated, “Some  other  great  climbers  that  sort  of  cut  their  teeth  in  the  Wasatch  were  Drew Bedford,  Hank  Armontrout,  Jim  Dockery,  Rick  Wyatt,  and  Merrill  Bitter.  These  are  all people  that  sort  of  honed  their  skills  in  the  Wasatch,  and  then  proceeded  to  become  great climbers  throughout  the  world” (pg 15).

The Marriott Library extends our deepest condolences to Merrill Bitter’s family and friends.