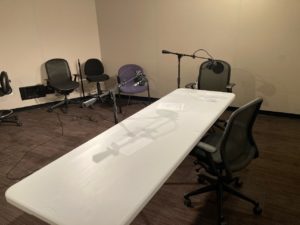 On March 20th, the Covid pandemic shut everything down. From March 2020 until August 2020 no projects took place in either the Audio and/or Video Studio. Prior to that, we had 27 student groups and 16 faculty/staff members, entities approved to use either studio in an unmediated fashion.

From August 2020 until June 2021 individual projects were recorded and filmed, but strict limits to occupancy made it difficult to record podcasts or use the studios on evenings and weekends.

Beginning July 2021, the studios were opened up for regular occupancy and the return of approved users who can film or record without Media Studios staff needing to be present.

So how has it been going? Building back during the Delta Covid outbreak has limited some use but we are seeing some incremental return. Student Media has returned to filming their news program and GeekWave projects in the Video Studio.

I have worked with Dean Keith Diaz Moore in the College of Architecture and Planning to record and edit his Changing Spaces podcast. I have also been conducting short interviews on behalf of Associate Vice President for Research, Erin Rothwell, and her team’s brief informational podcasts regarding research integrity.

In addition to one off recordings for Fine Arts professor Wendy Wischer and several students wishing to record ADR for their film projects, the biggest use of the Audio Studio will commence this week when Life Long Learning brings over a dozen students into the Audio Studio to record audio narrations.

We were really maximizing the use of the Audio and Video Studios, located in the Faculty Center, until the pandemic shutdown. Now the strategy is to recruit new users and groups to avail themselves of the equipment, space and soundproofing of professional studios while reaching out to more of those pre pandemic users still on campus.