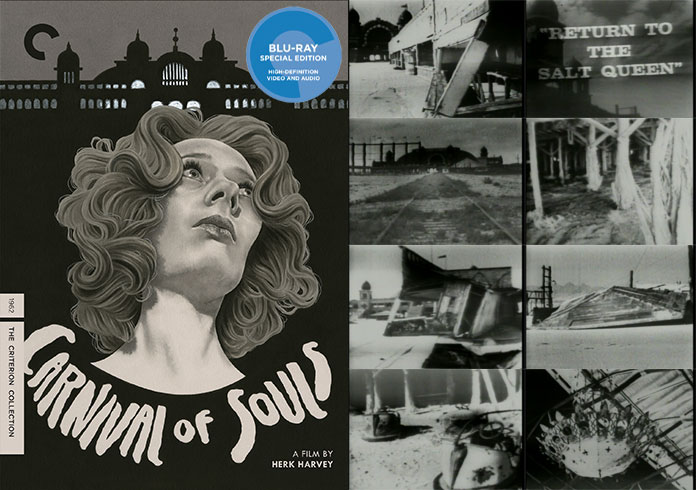 Kansas filmmaker Herk Harvey drove past Saltair only a couple of years after the once extravagant resort closed its doors forever, but the structure was already crumbling.  The ghostly sight of the dilapidated pavilion inspired his atmospheric horror film, Carnival of Souls (1962), a cult classic filmed on location in Utah and Kansas and recognized for its low budget practical effects, eerie storyline, stylized black and white cinematography, and haunting organ score.

Located on the southern shore of the Great Salt Lake, Saltair had been a popular destination for swimming, dancing, and carnival attractions in the early 20th Century before environmental, structural, and financial setbacks led first to decline and finally to permanent closure in 1959.  Since that time, the defunct resort, which burned to the ground in 1970, has been a continuing source of fascination for many, inspiring fictional works, documentaries, and news reports.

Among the many resources relating to the history of Saltair located in Special Collections are several videos shot in the decades after the resort closed down, including news photographer Al Brain’s shots of the building burning down in November 1970 (A0354), footage of floods encroaching on the new, much less lavish 1981 Saltair building, which survives today as a concert venue (A0303), and B-roll and archive footage compiled by broadcast journalist Craig Wirth for a television documentary in the early 2000s (A0355), all of which are available to view on DVD in the Special Collections Reading Room on Level 4.

Of the footage collected by Wirth, “Return to the Salt Queen,” a 1960s TV special by Ed Yeates for KCPX (now KTVX Channel 4), is especially fascinating.  This 26-minute video offers a brief history of Saltair and features interviews with people who remember the heyday of Saltair juxtaposed with shots of the derelict resort from a time contemporary with Herk Harvey’s film.  In 2016, the Audio-Visual Archive worked with The Criterion Collection to include “Return of the Salt Queen” as a special feature on its new release of Carnival of Souls, which is available to view on Blu-ray in the Special Collections Reading Room as a part of A0704, a collection containing moving image and sound productions that feature archival materials from Special Collections.

Carnival of Souls is in the public domain in the United States.  In addition to the new Criterion Collection Blu-Ray in Special Collections, which boasts excellent image quality and numerous special features, the basic film is available to stream via the Marriott Library’s Kanopy service.