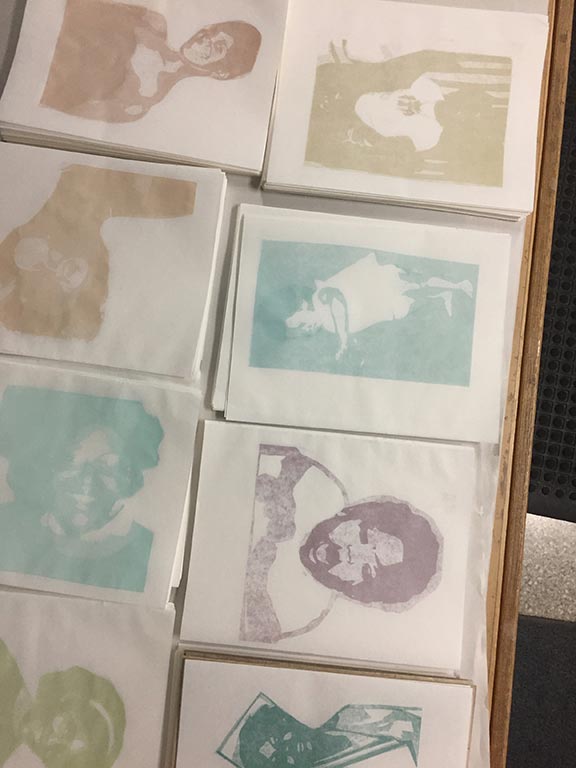 14 Nov Tia Blassingame’s I AM Tia Blassingame is a book artist and printmaker exploring the intersection of race, history, and perception. Utilizing printmaking and book arts techniques, she renders racially-charged images and histories for a nuanced discussion on issues of race and racism. Blassingame holds a B.A. from Princeton University, M.A. from Corcoran College of Art + Design, and M.F.A. in Printmaking from Rhode Island School of Design. She has been an artist-in-residence at Yaddo, MacDowell Colony, and the International Print Center New York (IPCNY). Her artists’ books and prints can be found in library and museum collections around the world including Stanford University, Library of Congress, State Library of Queensland, the Metropolitan Museum of Art, and Tate Britain. Blassingame is an Assistant Professor of Art at Scripps College, where she teaches Book Arts, and is the Director of Scripps College Press. Introduce a book project that you’ve recently completed.
I AM features pressure prints of personal photographs with handset letterpress text in a stab binding. I position myself as a stand-in for African American victims of violence and police brutality to explore the phenomenon of their post-mortem criminalization. The pointed humiliation and dehumanization of black victims, their loved ones, and communities has become increasingly blatant and ludicrous—how immediately and wholly their character, appearance, and lifestyle are cast in a negative light. The unspoken assumption: they must be guilty of something. Black women and girls especially are deemed suspect at the intersection of racism and misogyny. Did you discover any new mode of making, any new skill or technique which you had not previously engaged in?
At Paper and Book Intensive, I had taken a pressure printing workshop with Barb Tetenbaum that introduced me to using the technique for detailed, tonal images. I really enjoyed the process. It gave me an immense amount of control in making and altering images that remained recognizable. Was building this book generative for you in terms of conceptualizing future projects?
Though it can stand alone, I AM is in conversation with my YOU ARE, which employs the same techniques and structure. Where I AM focuses on violence directed at black bodies, YOU ARE examines black womanhood through the lens of white womanhood. Or vice versa depending upon who the reader thinks “you” is. Speak about potentials and possibilities—what would you do differently if you were to reproduce the project from the beginning?
I want to say that I would edition I AM and YOU ARE together if I could do it all over. I learned so much in the process of printing I AM, but I needed a few months to consider the fracturing of the portraits in YOU ARE and how that relates to the construct of race’s fragility, particularly in terms of femininity, value and innocence. Talk about the process of documentation and how it’s different from your white colleagues?
For me, it is very important, though mildly uncomfortable, to be in the photographic documentation of my process. I think it is really important to see black artists in the studio, with their art, giving lectures, etc. It is too easy to have your effort and presence erased. Particularly for black artists. Obviously representation is so important. In today’s climate, it is necessary to counter the attempts to portray black people, particularly black women, negatively with images of artistry and creativity. So I share photographs of myself working on I AM in the studio, not because I want to show tons of pics of me sleeping and running on fumes in the studio, but because I remember seeing images of black painters, writers, sculptors, and printmakers. Those images document a history of creativity and artistry in the black community, and allows you to recognize that the rhetoric spewed about the inability and laziness of black people is more likely projection than fact.