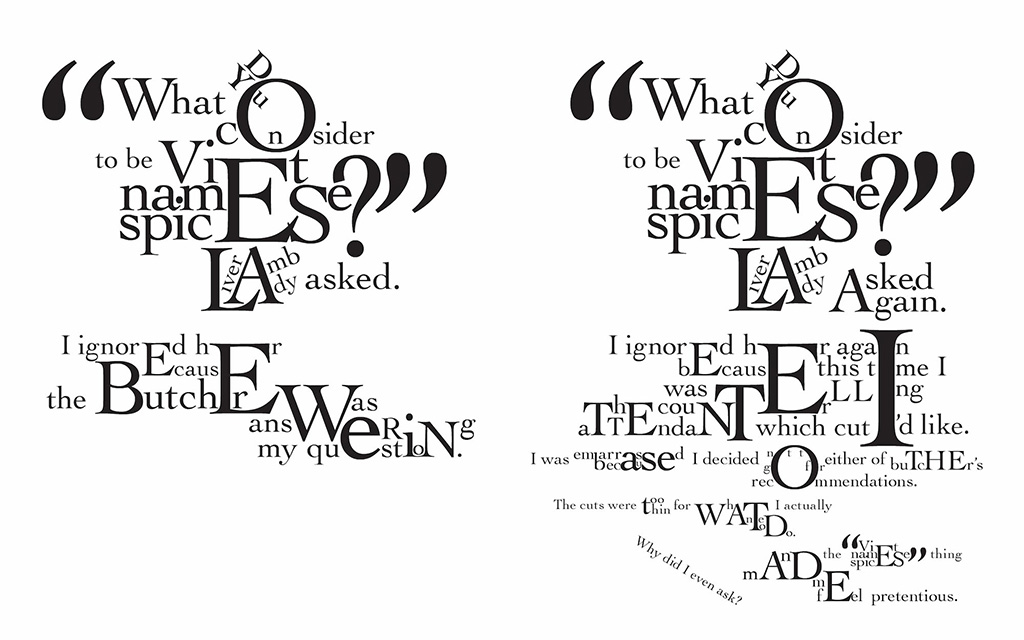 Posted at 18:42h in Book Arts, Red Butte Press, This Book is Now by crane 0 Comments
0 Likes
Share
Woody Leslie is a multidisciplinary artist who constructs large homes for tiny ideas. Equal parts book artist and writer, he writes specifically for the book form. The results are large edition verbo-visual artist’s books, chapbooks, and other publications themed around autobiographical micro-memoir, and visual typographic constructions. Recent works include Understanding Molecular Typography (Ugly Duckling Presse, 2019), Words & Vegetables (Large Home Tiny Idea, 2017), and the digital book Courier’s Text Atlas of the United States of America (UDP, 2015). Born and raised in Northern Vermont, he now lives on a one acre homestead in Western Kentucky, between the Tennessee and Mississippi rivers. More info at WoodyLeslie.com Characters is the fourth book in my 2019 chapbook subscription series, Tiny Ideas. Every other month I create a new chapbook and mail it out to my list of subscribers. The books are all about different subjects—whatever tiny idea I happen to be mulling over at the time—but unified by their size (5” x 4”) and production method (saddle-stitched pamphlet, with digitally designed laser printed guts, and inkjet printed cover). I started this project as a way to find a home for some of these tiny ideas I had been kicking around, and also because I was curious about the subscription model as an approach for artists’ publications. Characters is a series of drawings made entirely out of letters and other typographic glyphs. The book is an abecedarian—the 26 drawings are alphabetized by a prominent letter in each character. Other than rotations and the occasional inversion, the letters are unedited so that the idiosyncrasies of each typeface can be faithfully incorporated into the peculiarities of each character. I make visual work in the form of books, but I am hardly a visual artist. I have a background as a musician and a cook. I don’t draw, I don’t paint, I don’t even really take photographs. Words, language, and storytelling have always been a significant part of the work that I make, even long before I realized that I’m a writer, and I have found a way to make words be the visual focus. On the one hand, Characters is a bit of an outlier in my recent work in as much as it contains no writing, and is pretty much all drawings. But on the other hand, it makes total sense in a long trajectory of my verbo-visual work. In my early 20’s I started drawing autobiographical comics as a way to write. Writing was difficult for me. I never felt I could get my words to truly express my ideas, and writing snippets of thought in my sketchbook somehow felt, at best, incomplete, and at worst, pretentious. But drawing a cartoony picture along with the snippets of writing did away with my inhibitions. It made me take my thoughts less seriously, and allowed me to get down on paper small ideas, or brief interactions from my day. Mind you, I don’t draw well, but I embraced that fact and gave myself permission to draw without any expectation that I should be “good” at it. I had a red beard, and I latched onto that. All the drawings of me are a beady-eyed, near stick-figure, with a scribbled on red beard. The beard is how you know it’s me. I can’t draw anyone else. But it was enough to get me writing. I liked how drawing slowed my thoughts down. A two-sentence idea written in a journal is over and done with after five seconds. But if I drew pictures it slowed me down. It might take fifteen or twenty minutes to write down the same thought. I would spend more time mulling over the thought, and it had potential to grow into something else.

After a few years of cartooning, I realized I had tricked myself into writing. Most of my cartoons were just panel after panel of my cartoony red-bearded head and a speech bubble with text. The scribbly heads were slowing me down, and I felt I no longer needed the crutch. I was mostly interested in the visual placement of text, and the sequencing of fragments of writing—after all, a comic panel has a lot in common with the page of a book as a framing device.

This is where my book Parsely comes from. The red-bearded head has been replaced by a red W; the speech bubbles replaced by over-sized quotation marks; and the comic panel replaced by the page as a framing device for segments of text. The book is illustrated by the text alone. My next book, Words & Vegetables embraced writing full on. The pages feature poetry, largely unadorned, though accompanied by typographic illustrations of another sort. Of course, once I felt comfortable as a writer, it only made sense to return to drawing.

A few years prior to grad school I discovered letterpress printing, and really loved the physical tangibility of words. But in grad school I got hooked on offset printing, thanks to a fellowship with the Journal of Artists’ Books under Brad Freeman. Offset printing opened new possibilities for me, and completely changed my way of working. I was willing to give up the physicality of words in favor of the precise control I could have in the manipulation of letters outside of their rectilinear predispositions. I now do almost all my work digitally, using InDesign and Illustrator. I don’t think we spend enough time talking about digital craft—the fluency one can have in these computer programs, how that skillset parallels other artists’ prowess with brushes, chisels, or Vandercooks, and how that in turn shapes the work we make.

With recent work, I take short stories and use InDesign to manipulate the words into these visually dense images. They are still somewhat readable, depending on the piece, but I find myself less interested in the legibility, and more interested in them as semantically rooted images. I used to draw to trick myself into writing; now I write to trick myself into drawing. I also really enjoy the process, and the more I do it, the more I feel like I’m developing a vocabulary of techniques for writing/drawing. The drawings of Characters go beyond this visual writing. There is no writing in Characters at all, yet everything is composed entirely of letters. I would never feel comfortable sitting down to draw these characters with a pen, even as simple as they are. But letters are a precomposed shape that I feel very comfortable working with. Thanks to projects likes Words & Vegetables, and these visual writings, using letters as objects for larger compositions makes sense to me. It is a tool I have. Though a finished book, I think of Characters as a sketch, or a stepping stone on the way to another project. The particulars are as yet unknown, but I imagine a graphic novel where the characters of the story are all composed of text, like my Characters. The words they speak are letters too, but more like Parsely in their complex methods of behavior. The scene is composed of words, in a structural manner like the characters themselves, but also as semantic stand-ins like parts of Words & Vegetables. There’s a blurring of the lines between all these entities, where the Characters are part of words, and parts of their speech are formed in Characters, which melt into the scenery of words around them. The whole work is at once semantic and visual—writing and drawing so tightly wound up together that even I don’t know what process I’m engaged with.