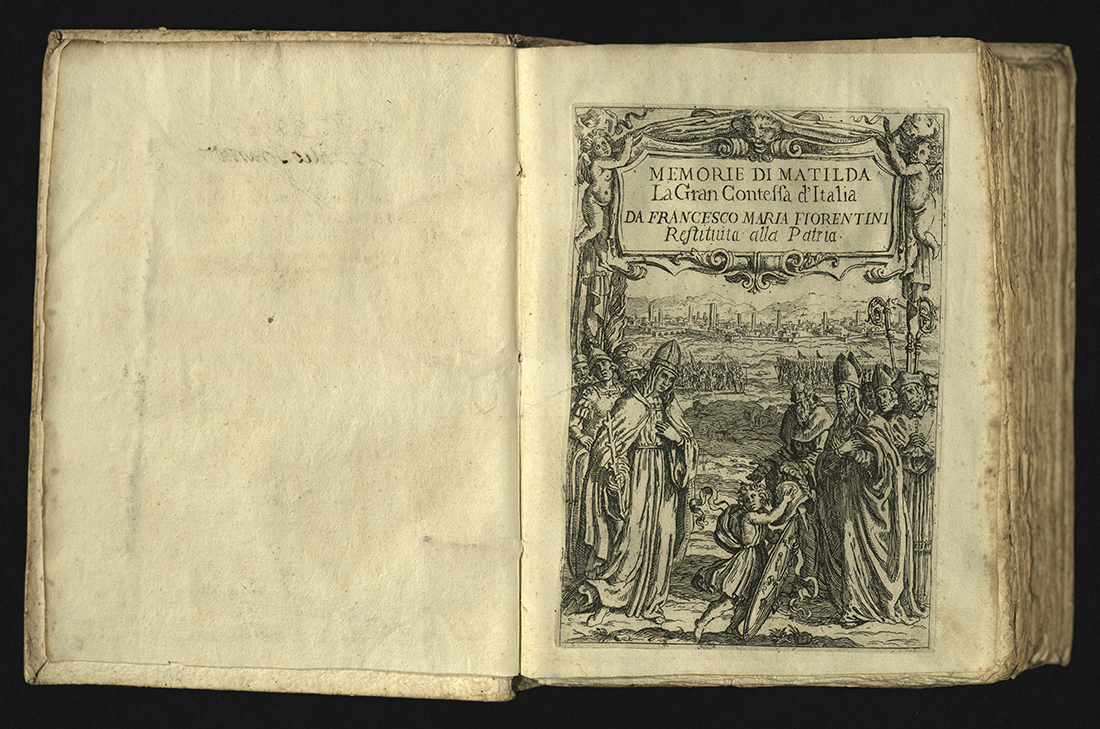 Matilda of Tuscany is considered to be one of the most powerful Italian nobles during the second half of the eleventh century. A member of the House of Canossa, la gran Contessa — as she was often called — came to power during a period of constant battles, intrigues, and excommunications; but, despite it all, demonstrated an innate leadership ability.

Matilda was born near Lucca sometime during 1046 to Boniface III of Canossa and Beatrice of Lorraine. Her father had worked closely with the Holy Roman Emperor and King of Germany, Conrad II. Boniface became Margrave of Tuscany in 1027, a medieval title for the military commander assigned to maintain the defense of the border provinces of the Holy Roman Empire.  In 1037, Boniface married his second wife, Beatrice of Lorraine, the niece and foster daughter of Empress Gisela of Swabia. As a close relative of the Emperor, the much younger Beatrice provided not only prestige, but also the prospect to finally have an heir. The couple went on to have three children: Frederick, Beatrice, and Matilda, who was the youngest. 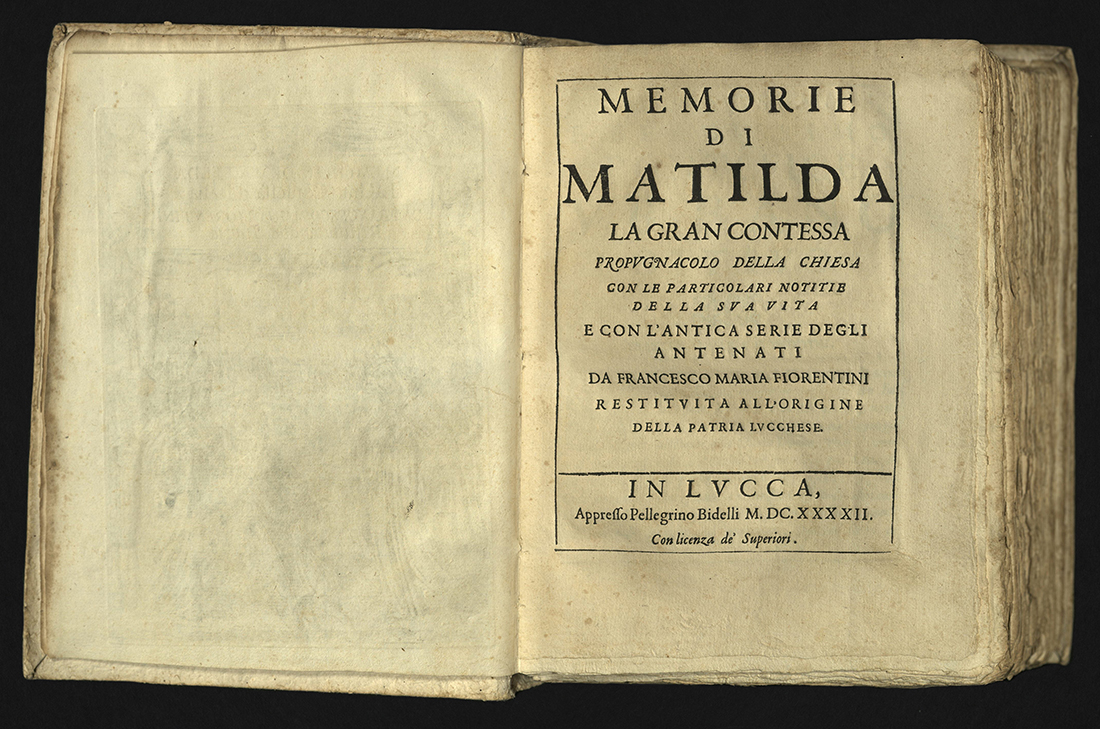 Before the age of ten, Matilda lost not only her father, but also her older siblings, officially making her the sole heiress to the greatest territorial lordship in the southern part of the Holy Roman Empire. After Boniface’s death, Matilda’s mother married her cousin, Godfrey the Bearded, Duke of Upper Lorraine. Shortly thereafter, Matilda would become engaged to her step-brother, Godfrey the Hunchback. When the elder Godfrey died in 1069, Matilda and her mother assumed the rule of Tuscany together. But ruling did not come easy.

After losing her only child just weeks after birth, Matilda and Godfrey’s marriage was proving to be a failure. By the end of 1071, Matilda had left her husband and returned to Italy. Godfrey the Hunchback adamantly protested the separation and demanded her return repeatedly, to which she repeatedly refused. For several years following, Matilda attempted in vain to obtain a dissolution of her marriage to Godfrey from the Pope, Gregory VII. 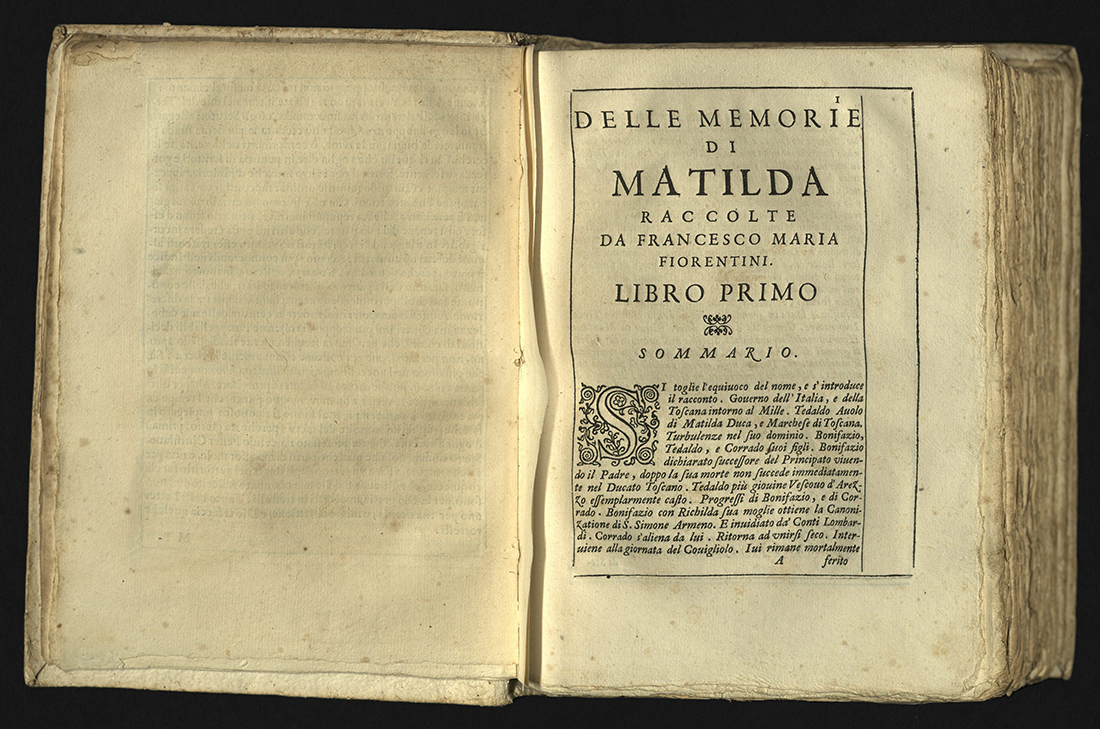 Both Matilda and her mother were considered close allies of Pope Gregory VII, who expressed in his letters to them that they were the only princes he could trust. Their support became crucial during the so-called Investiture Controversy — a growing rift between the Pope and King Henry IV. With both men claiming the right to appoint bishops and abbots within the Empire, Matilda and Godfrey the Hunchback found themselves on opposing sides of the dispute, further degrading the relationship. Out of anger and jealousy, it is believed that Godfrey was the one who began circulating rumors of a licentious affair between Gregory VII and Matilda.

Matilda’s mother died at the time when the conflict between King Henry IV and Pope Gregory VII was escalating. By 1076, the King had accused the Pope not only of taking power through an illegitimate election, but also of governing the Church through a “women’s senate” and sharing a table with a “strange woman.” The contempt was so immense, that Matilda was not even called by name. The Pope responded with the excommunication of the King. 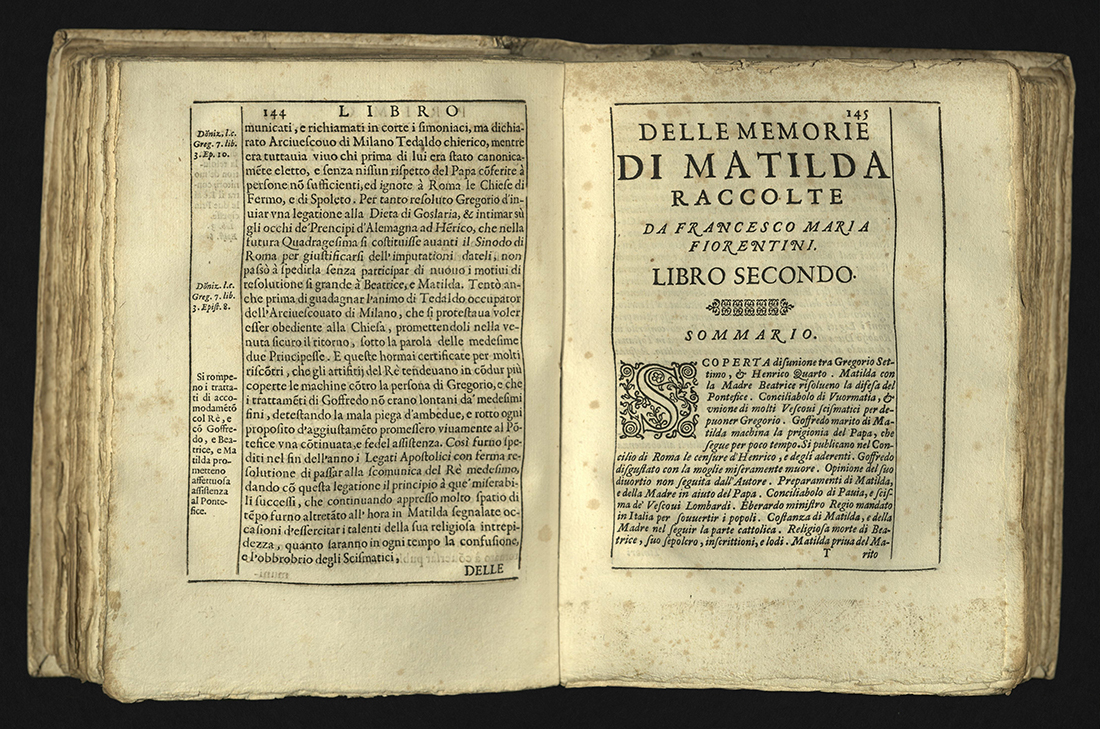 With the death of her husband and mother in 1076, Matilda became the sole ruler of both Tuscany and Upper and Lower Lorraine. As she had no living male relatives, Salic law allowed her to inherit all her family’s land, which included the counties of Reggio, Modena, Mantua, Brescia, Verona, and Ferrara. For nearly forty years, Matilda continued to play varying roles of importance to the papacy and the Empire. Throughout it all, Matilda’s support of the reform papacy was unwavering. Patroness and protector, her court served as a vital refuge for the many clerical reformers driven from their posts by the hostility of the German crown, including Pope Gregory VII.

When King Henry IV and the Lombard bishops who had also been excommunicated sought to capture the Pope, Matilda urged him to take refuge in the Canossa castle — which would become the setting for the short-lived reconciliation between the Emperor and the Pope. It is likely that she was closely involved in the negotiations. Matilda’s court also protected reform clergy like Anselm of Canterbury and Bonizo Sturi, in addition to providing security for the fleeing wife and rebellious son of the Emperor. From 1080 on, Matilda put all her military and material resources into the service of the papacy. Even after the death of Pope Gregory VII in 1085, Matilda remained an important pillar of the Reform Church. However, although she was genuinely committed to the reform agenda, her support for it was not devoid of certain political calculations, or of a healthy concern for the stability of her patrimony. 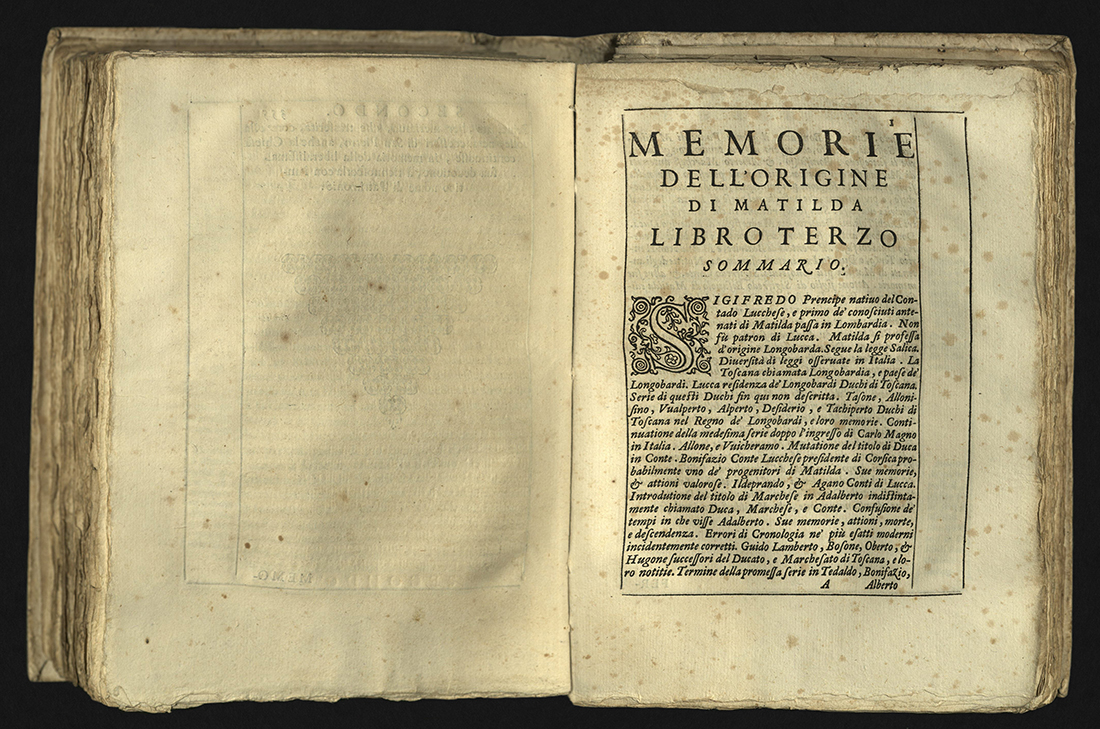 Beyond Matilda’s military prowess and leadership skills, she was also a highly educated woman, fluent in French and German and able to read and dictate in Latin. Her intelligence, vast territory, and courageous support of the papacy promoted her into a justly famous — and controversial — figure in her own time. Those who were sympathetic to her positions were often lavish in their praise. Ekkehard of Aura, a Benedictine monk and chronicler, called her “the wealthiest, most famous woman of our times and most distinguished in virtues.” Hugh of Flavigny, another Benedictine monk and historian, described, “at this time, only countess Matilda was found among women who scorned the power of the king, who opposed his cunning and power even with military conflict, so was deservedly called virago, who surpassed even men by the virtue of her spirit.”

Her life was later put to pen with Donizo of Canossa’s Vita Mathildis, written in leonine hexameters sometime between 1111 and 1115. Vita Mathildis is divided into two books, the first of which entitled, De Principibus Canusinis, concentrates on the family’s history and their possession of the castle of Canossa. The second book focuses on Matilda herself. Donizo most likely coordinated his Vita with Matilda in terms of content — including book illumination — down to the smallest details. It was completed shortly after Matilda’s death. 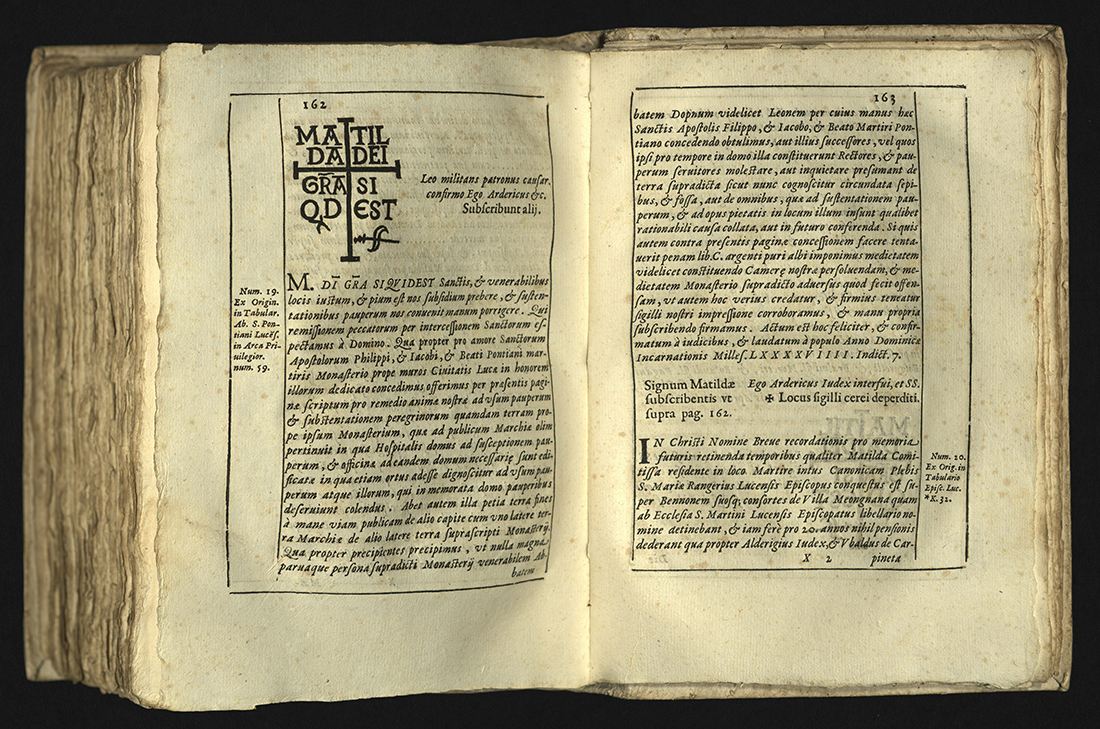 Matilda died on the night of July 24, 1115 at the age of sixty-nine. Prior to her death, she made a donation to the apostolic see of her entire allodial inheritance in full proprietorship, though reserving the rights of disposal during her lifetime and that of the young emperor Henry V, her chosen heir. Although King Henry succeeded in taking possession of Terre Matildiche without any resistance, that donation would play a part in imperial-papal conflicts for centuries to come. In Italy, Matilda became a myth and is referenced in numerous artistic, musical, and literary examples. Dante’s Divine Comedy, for instance, made a significant contribution to the Matilda myth, invoking her memory in the mysterious “Matelda” who is found gathering flowers in the earthly paradise of his Purgatorio. Miracle stories and other legends added to her legacy, which reached its peak during the Counter Reformation and Baroque period.

Matilda was at first buried in the Abbey of San Benedetto in Polirone. In 1633, at the behest of Pope Urban VIII, her body was moved to Rome and placed in Castel Sant’Angelo. Twelve years later, in 1645, her remains were moved once more to the Vatican, where they now lie in Saint Peter’s Basilica. She is the first woman to have the honor of being buried there, and one of only six women in history.

Memorie Di Matilda is the first edition biography of Matilda written by Francesco Maria Fiorentini and published in 1642. Fiorentini was a physician, hagiographer, correspondent of Galileo and himself a native of Lucca. The task of writing a life of Matilda was suggested by Marcantonio Franciotti, archbishop of Lucca, who granted Fiorentini access to the episcopal archive, rich in primary source documents of the eleventh and twelfth centuries. Transcriptions of some of the most important contemporary documents occupy the final sixty-five pages of this book. These include letters and official pronouncements of Matilda herself, some of which are accompanied by a woodcut rendering of Matilda’s famous cruciform signature.