Posted at 12:30h in Book of the Week, Rare Books by lyuba 3 Comments
5 Likes
Share

“Fashion is not something that exists in dresses only. Fashion is in the sky, in the street, fashion has to do with ideas, the way we live, what is happening.” 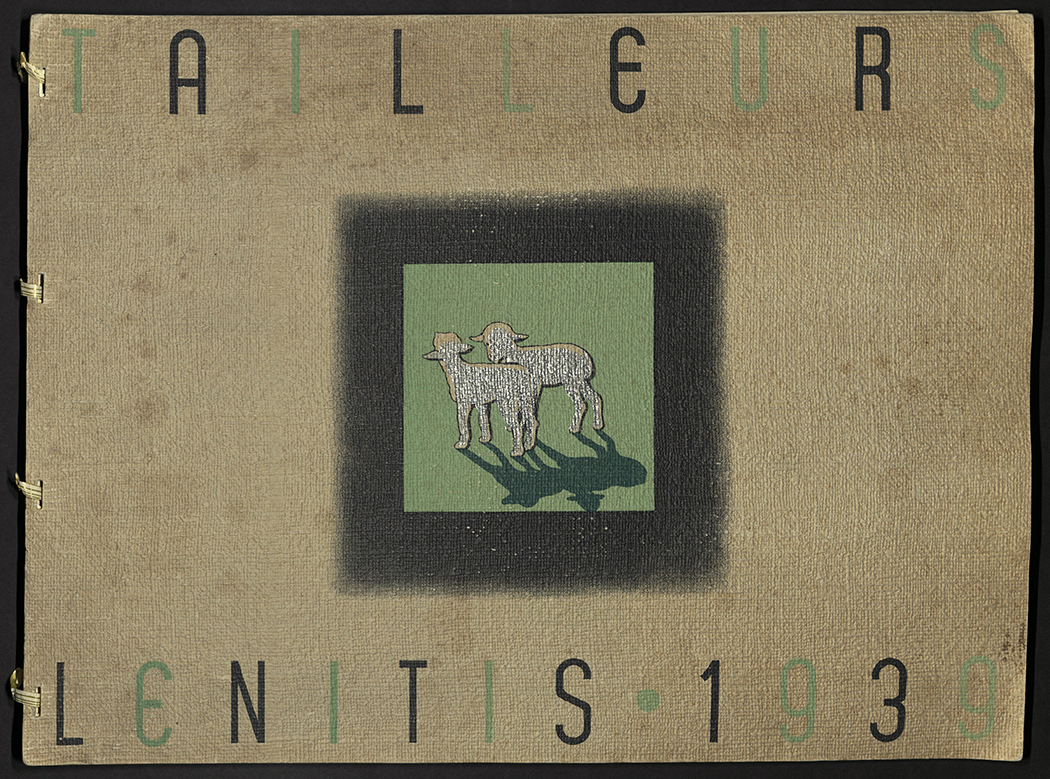 Prior to the 1830s, the word “tweed” was only ever used as a proper noun, referring to the Tweed river that flows through the Scottish Borders region. In the nineteenth century, the river became well known throughout the United Kingdom, and to an extent, Europe, due to its association with the famous writer, Sir Walter Scott. But the popularity of “tweed,” as we know it, is undoubtedly attributed to its life as a textile. The family of textiles that later became known as tweeds were initially sourced by merchants from Scottish Border regions. Though it might be assumed that the name was directly inspired by the local river, the term tweed likely derived from the Scottish words tweel or tweelds — a term that was used to denote any cloth in the twill weave, but most often applied to woolen fabrics. By the 1840s, the word was widely adopted within the textile and tailoring trades and used in fashion advertisements in magazines such as The Satirist and Punch, typically referencing men’s trousers and large plaids. 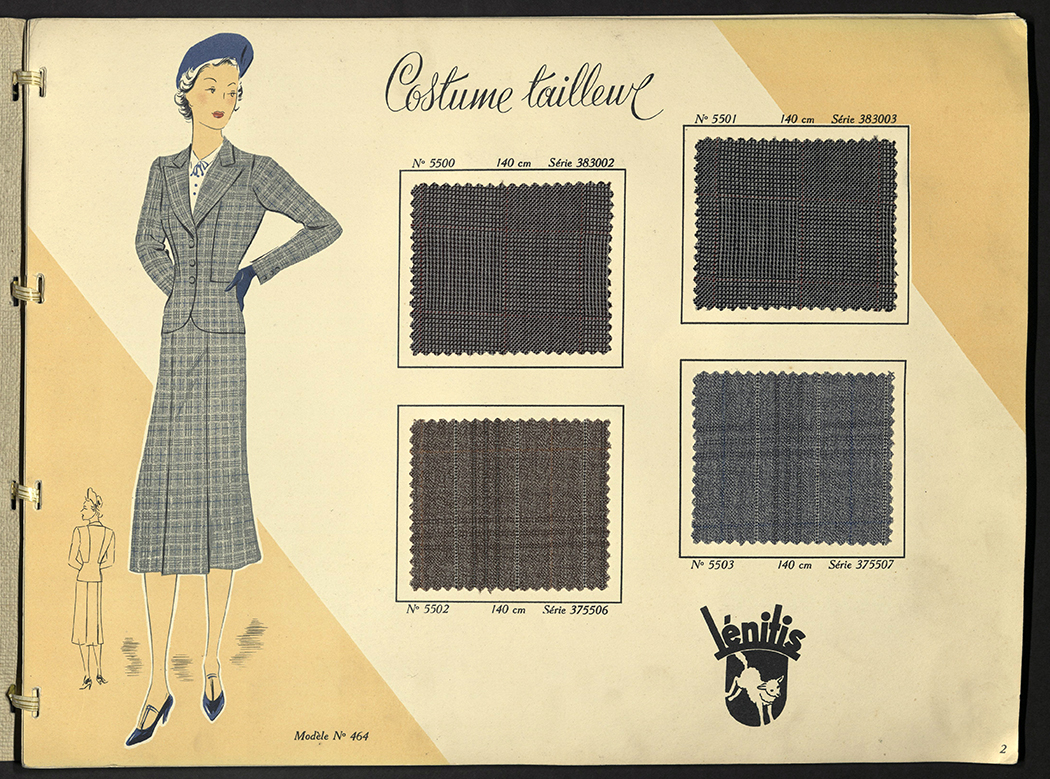 For many decades, tweed remained a rugged textile worn by men participating in outdoor activities. However, after the First World War, shifting developments in economy, politics and the social climate provided an opportunity for tweeds to be incorporated into the women’s fashion market. Sportswear chic became the look of the inter-war era: clothing that not only expressed comfort, but also the possibility of action. These changing conceptions of femininity greatly impacted the design, production, and sale of tweeds to women in Europe and abroad. In the October issue of American Vogue, Scotch tweed had been deemed “The latest Godchild of the French Couturiers.”

“Scotch tweed as a fashionable fabric is a comparatively new thing. Only a few years ago, the world of fashion had not awakened to its possibilities. Then, the Scotch Tweed, in fact all tweed, was employed to build men’s clothes and if used for women’s clothes it was confined to sports things of the most rugged type. And only the British wore these… The War changed many things and the mode is always influenced by the spirit of the times. Post-war dress declared that the beautiful and the practical must be reconciled: then the French couturiers adopted the tweed. This acted like a magic wand; the tweed blossomed into a new versatility of design and color…” 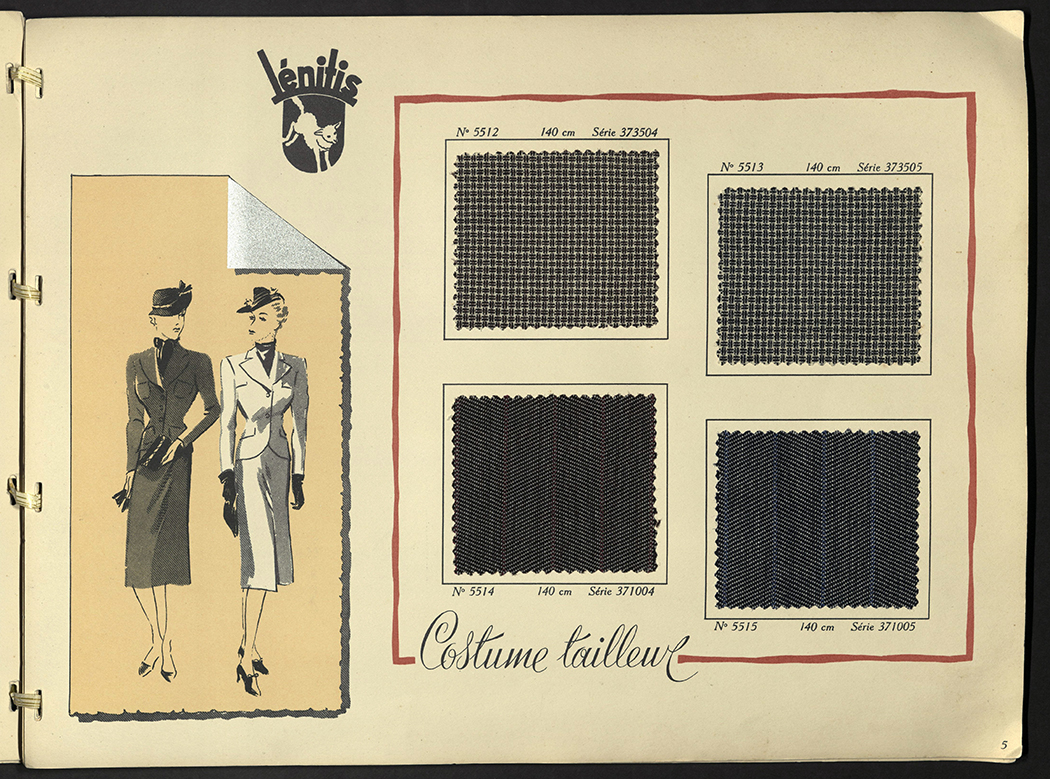 The article reflects the ways in which tweed had evolved from a rugged sportswear textile to one that could now be found within the high-fashion houses of Paris — the leading center for women’s fashion. Among the French couturiers, notable designers such as Coco Chanel, played a crucial role in popularizing the tweed suit internationally. Following fishing trips with her then lover, the Duke of Westminster, Chanel began to introduce tweeds and other knitted Fair Isle designs into her fashion collections. The simplicity of men’s sporting apparel inspired Chanel’s garconne look. She wanted women to have the same level of comfort, function, and durability and decided to open a boutique in London where she sold tweed cardigan suits. Appealing to the contemporary woman, the versatile clothes of Chanel’s early collections became hugely popular and were copied across the globe. 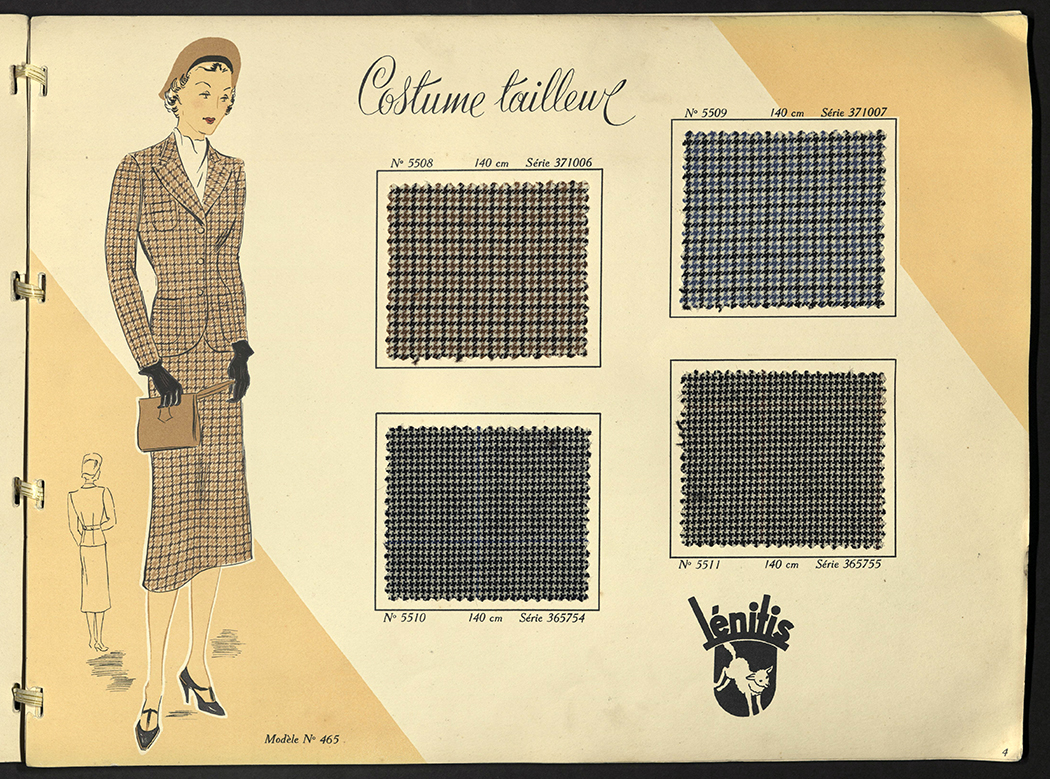 Chanel initially procured her fine tweeds from Linton Tweeds of Carlisle. In addition to Linton, Harris Tweeds and Otterburn Mills dominated much of the international market in the sale of the textile. By the 1930s, Chanel had returned to France and switched to local factories. She began combining the classic tweeds with wools, silks, cottons, and even cellophane to give them a more high fashion and lighter weight style. Chanel was not alone in this innovation. Other famous French couturiers of the time included the House of Drecoll, Paul Caret, Jean Cocteau, and Elsa Schiaparelli, to name but a few. For the women’s market, mills would add other textiles, and later synthetic fibers like rayon and nylon, to create softer and more supple features. They also used brighter colors, often influenced by the rural landscapes of Scotland. 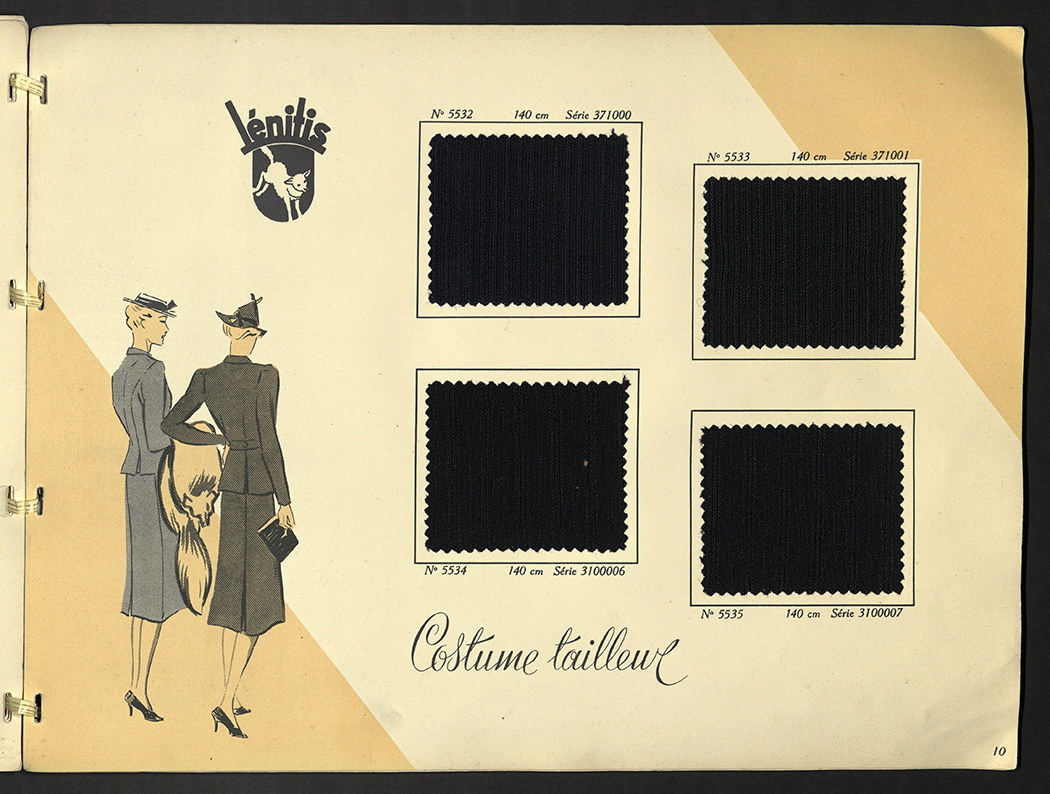 The popularity of the women’s tweed suit skyrocketed in the 1930s. “Sportswear” was no longer worn specifically for sporting activities, but could now be worn during luncheon parties in the country, or even shopping expeditions in the city. As in the words of one designer, “The clothes that sold best were those that were good for town and country.” The tweed suit was symbolic not only of an increased informality, but also of the social democratization of women’s fashion. As the thirties moved forward and Europe found itself on the brink of war once again, many of the couturiers shut their doors — some temporarily, and others for good. Despite all this, the tailored suit remained an ideal wartime outfit, due to its adaptability to different social contexts within the increasingly straitened times. 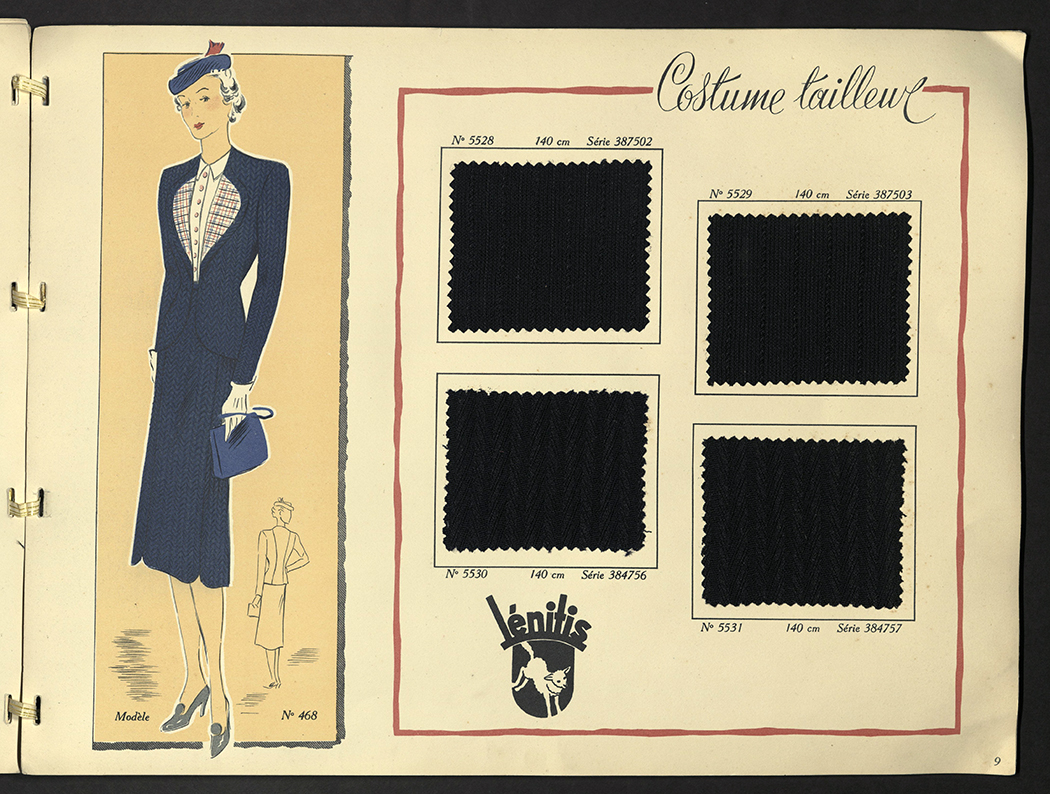 This sample catalog was created by Tailleurs Lénitis in Paris, 1939. The catalog includes forty-eight mounted samples of fabric, including wool, silk, and wool rayon blends. Each page features a large fashion illustration, at times accented in silver and adorned with colored borders and geometrical designs. Many of the illustrations feature the shoulder pads and tailored jackets of Elsa Schiaparelli’s distinctive designs, while the tailored skirts are reminiscent of Coco Chanel’s iconic two-piece women’s suit. Following the Second World War and its immediate aftermath, the tweed suit continued to have an ever more integral role in women’s wardrobes, primarily because of its adaptability and suitability for all-day wear. Over the course of the next sixty years, the suit found its way into the wardrobes of style icons such as Jackie Kennedy, Princess Diana, and Brigitte Bardot. During the twentieth century, the tweed suit became more than a symbol of fashion, but a representation of the liberated woman. 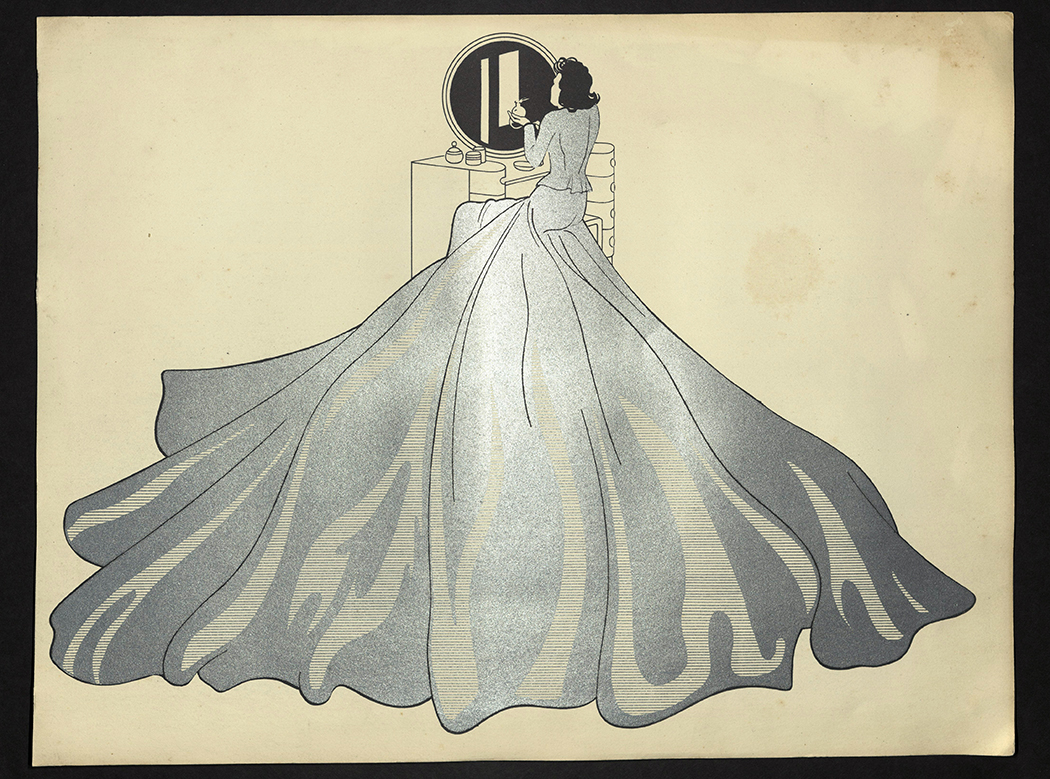 Did you know there is a clear etymological root between the words text and textile? We can trace it back to the Latin verb, texere — meaning “to weave.” From handmade papers to sewn bindings and cloth covers, the book is the perfect example of the interwoven industry of textiles and text. To learn more, we recommend viewing our Rare Books Virtual Lecture, Fiber Liber.