04 Oct Magazine of the Week — Punch, or The London Charivari

Posted at 12:30h in Book of the Week, Rare Books by lyuba 3 Comments
3 Likes
Share 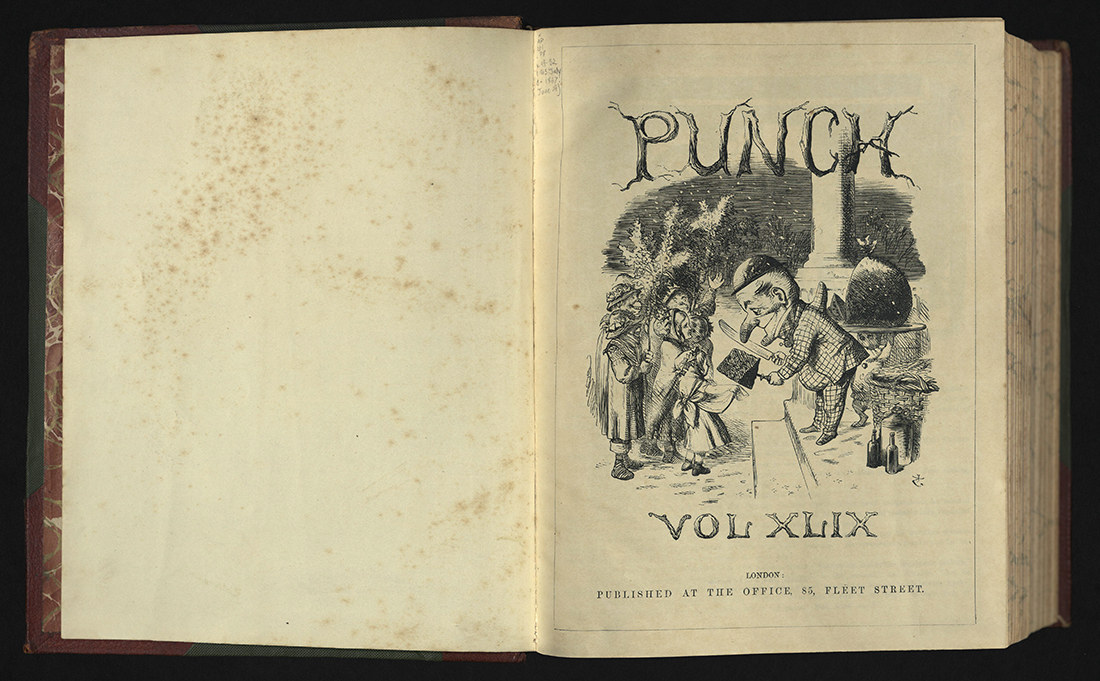 “This Guffawgraph is intended to form a refuge for destitute wit — an asylum for the thousands of orphan jokes — the millions of perishing puns, which are now wandering about without so much as a shelf to rest upon!” 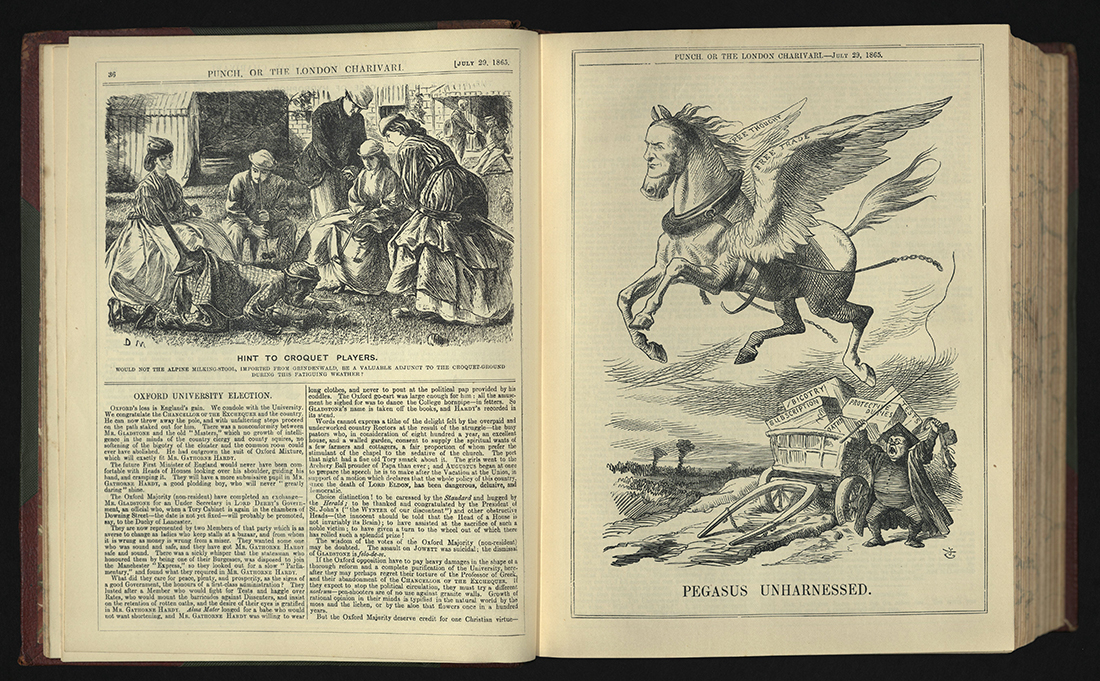 For more than a century, Punch magazine cast a satirical eye on life in Britain. Launched on July 17, 1841, the magazine reflected the interests, concerns and frustrations of the country, combining humor, illustration and political debate with a fresh and radical audacity. From the nineteenth century on, the magazine played a significant role in the development of satire in the Western world and in the realm of illustration, it practically revolutionized it. Today, Punch continues to stand out as a valuable resource for social historians. 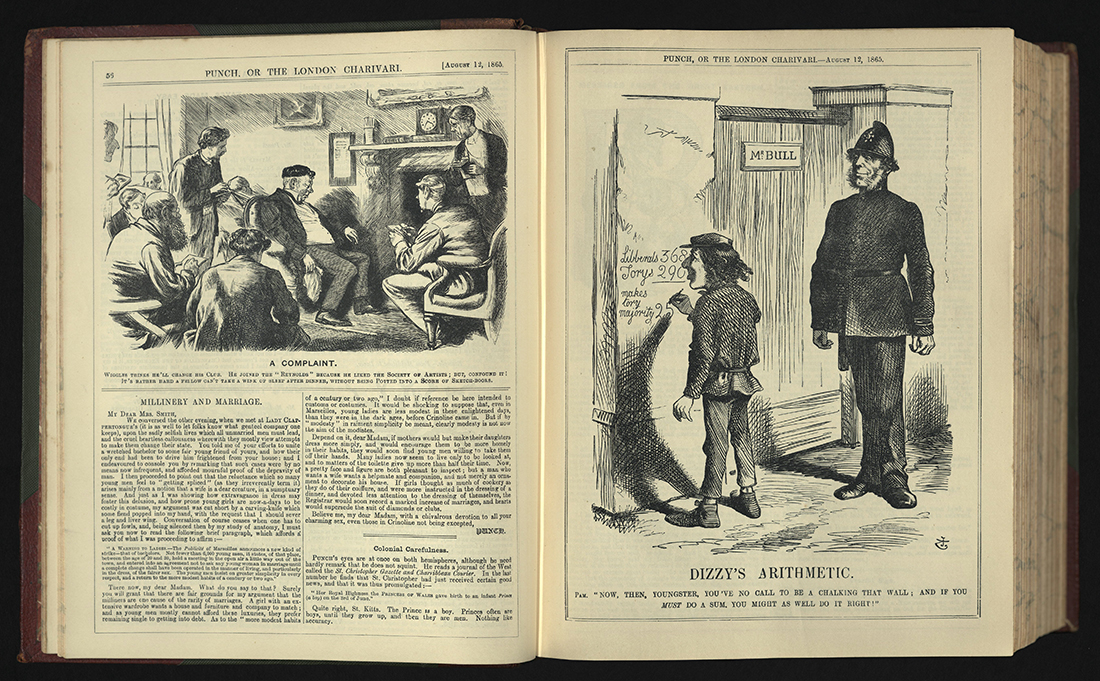 The idea for Punch magazine came from engraver Ebenezer Landells. Landells had been a fan of another satirical weekly coming from Paris called Le Charivari. He was intrigued by its heavy use of wood engravings and with the help of writer Henry Mayhew, the magazine was born. At one early meeting, someone had remarked that the magazine should be like a good punch mixture. To this, Mayhew shouted, “Capital idea! Let us call the paper Punch!” 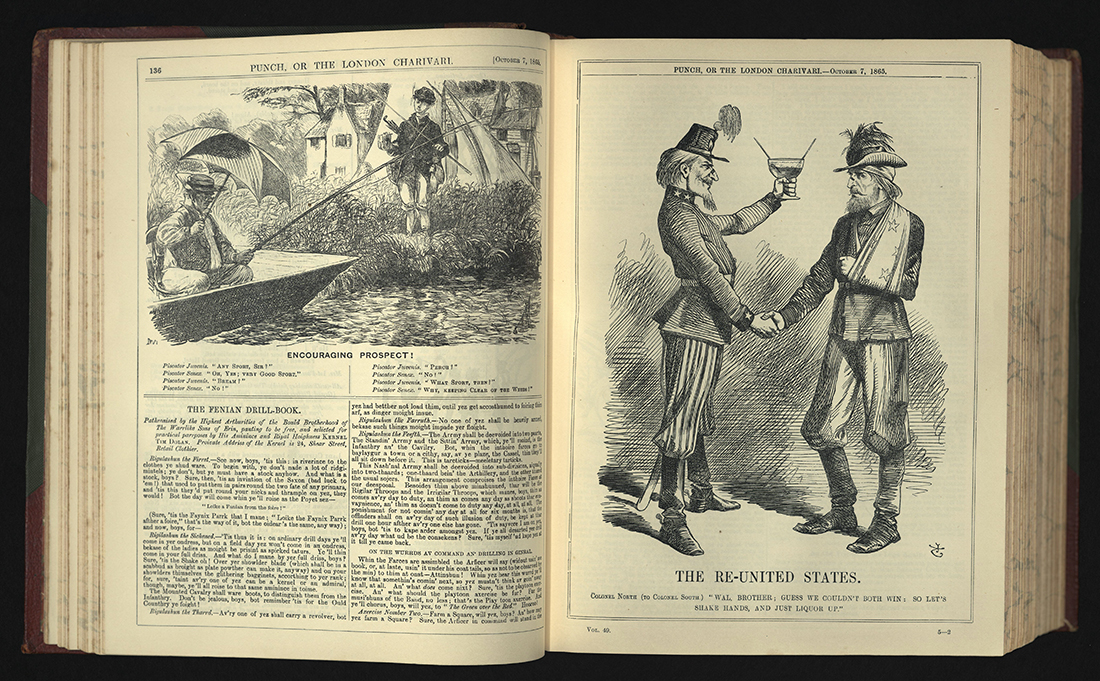 Using this name, the editors then took the anarchic puppet Mr. Punch, of Punch and Judy, as their mascot. An explanation was included in the introduction to volume one:

Our title, at a first glance, may have misled you into a belief that we have no other intention than the amusement of a thoughtless crowd, and the collection of pence. We have a higher object. Few of the admirers of our prototype, merry Master PUNCH, have looked upon his vagaries but as the practical outpourings of a rude and boisterous mirth. We have considered him as a teacher of no mean pretensions, and have, therefore, adopted him as the sponsor for our weekly sheet of pleasant instruction. 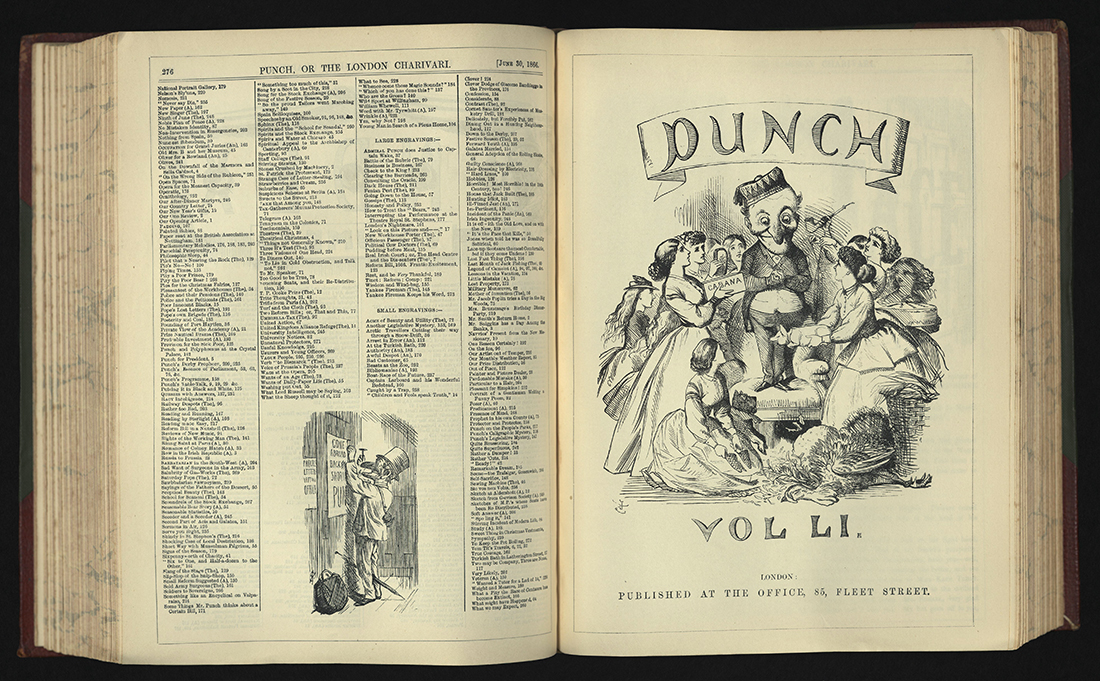 For the first fifty years of Queen Victoria’s reign, political caricature was virtually monopolized by Punch. The early issues were more politics than pictures, however, though each issue did feature a full-page spread at the center of the magazine. The satirical drawings were called “Punch’s Pencillings.” Each week the task was given to a different illustrator, while the subject of the illustration was decided by a committee of writers and artists at the weekly editorial meeting. 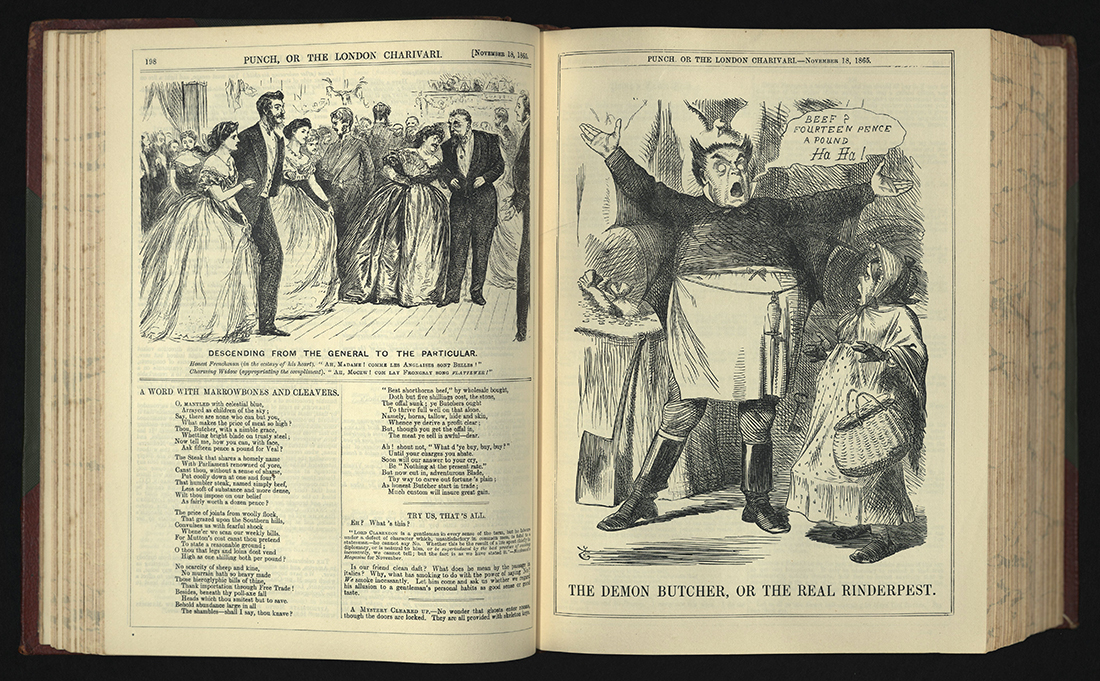 The editorial staff meeting took place over dinner — a tradition that lasted nearly 150 years. During the meetings they would eat, drink, smoke cigars, all the while laughing at their own jokes. When Punch moved into a new building on Fleet Street in 1865, the Punch Dinner tradition had become so established that the magazine made sure to have its own banquet hall. As was custom, the contents of the week’s main political cartoon would be discussed after dinner was over. As the brandy was passed around and the cigars were lit up, the editor would call, “Gentlemen, the cartoon!” 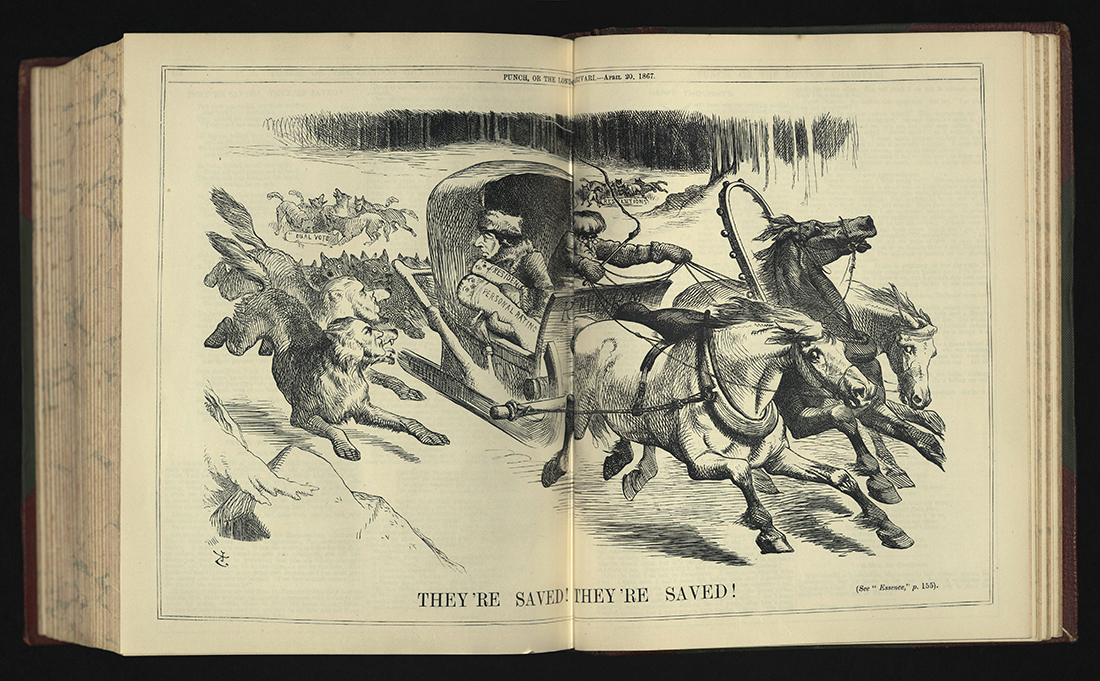 Reading some of the early captions, it might seem that they had been assembled together by a drunken committee. The truth is, they probably had. Unfortunately, the early issues were not that successful. The magazine struggled to attract readers and was going in the way of Mayhew’s other business venture, a failed pub. Despite selling more than 6,000 issues a week, this was not enough to cover all the costs of the magazine. Mayhew eventually resigned as the joint editor and the magazine was sold to Bradbury and Evans in 1842. That same year, Punch released an annual called the Punch Almanack, which sold an astonishing 90,000 copies. 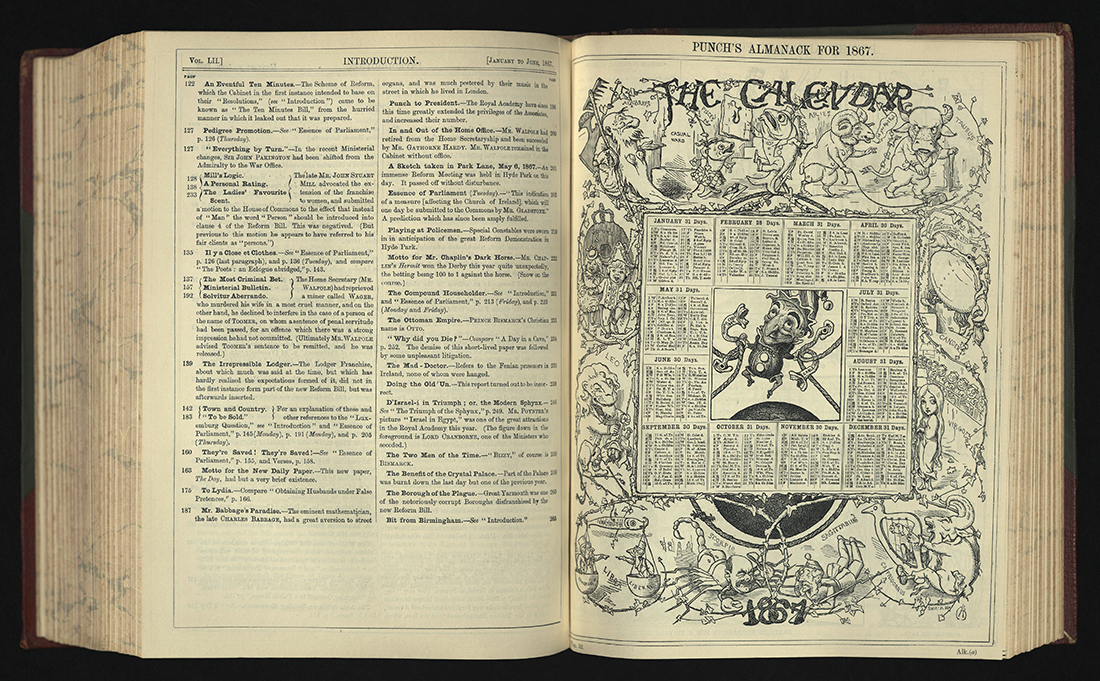 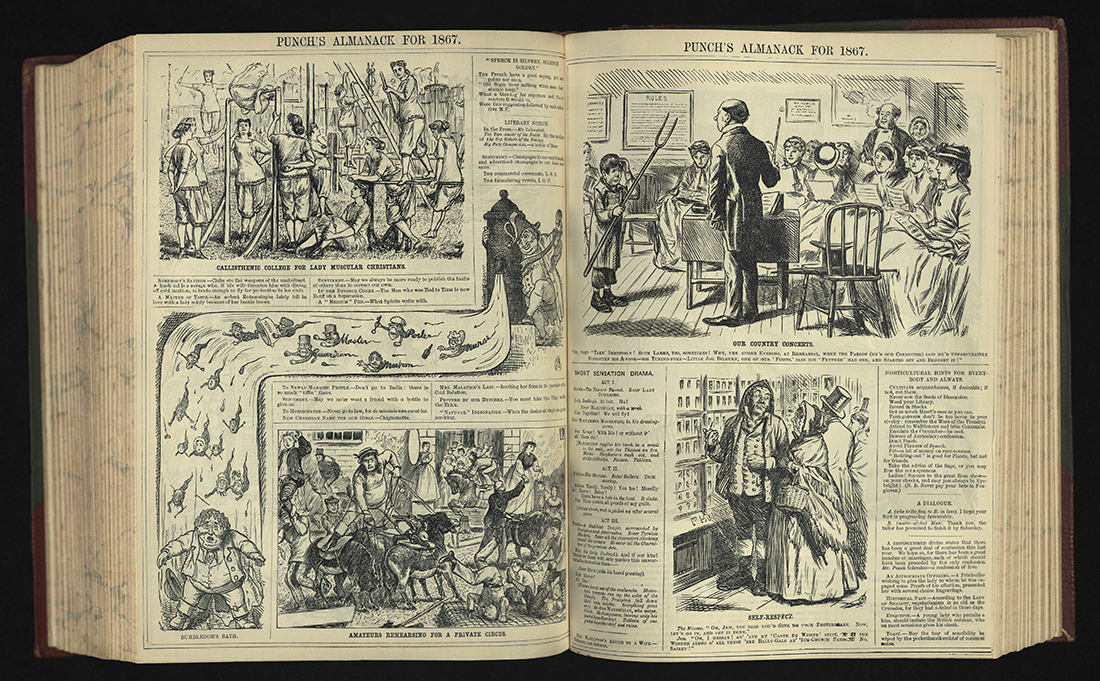 Publishers and printers, William Bradbury and Frederick Mullet Evans capitalized on the newly evolving mass-printing technologies, publishing editions from notable English writers such as Charles Dickens and William Makepeace Thackery. Both of whom contributed articles to Punch. Another staff contributor was a young illustrator named John Leech, who would go on to define the look and tone of the magazine as it reached its prime. During his tenure at Punch, Leech produced some three-thousand drawings for the magazine and gave the world the first “cartoon” as we know it. 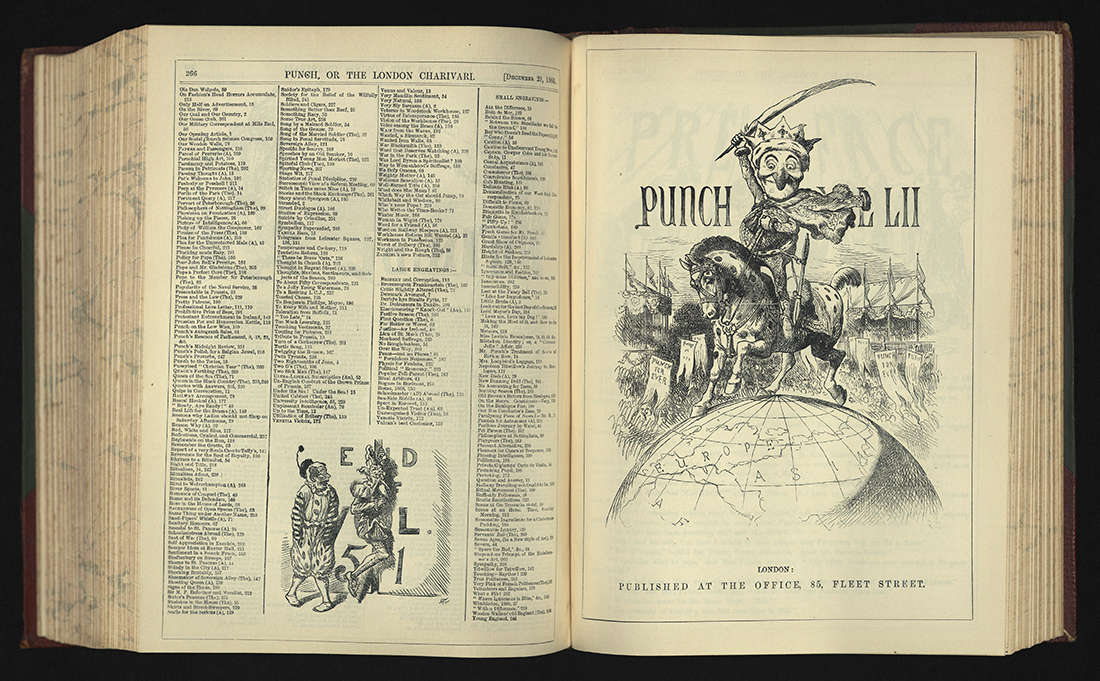 For the issue of July 15, 1843 the editorial board had decided the target of that week’s “Pencillings” would be the upcoming exhibition of paintings and murals for the not-yet-opened Palace of Westminster, which was being rebuilt after the disastrous fire of 1834. Artists made their submissions in the form of cartoons — the word used for preliminary drawings for a work of art. The staff at Punch felt this was a complete waste of money since, at the time, London was a city of poverty, ill health, slums, and workhouses. The exhibition was viewed simply as a means for the elite to celebrate their own importance. 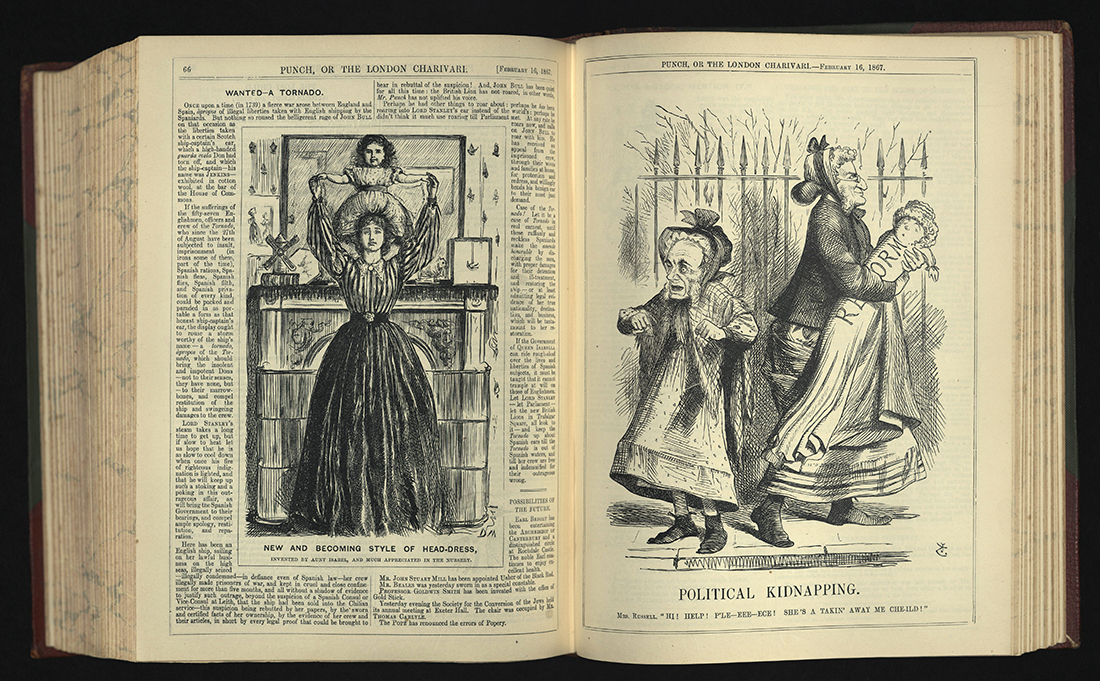 John Leech was selected to illustrate the piece, but for this issue “Punch’s Pencillings” would be replaced with the magazine’s own entry for the Parliamentary exhibition. Titled, “Cartoon No.1 – Substance and Shadow,” Leech’s full-page wood engraving depicted a group of poor and ragged Londoners visiting the exhibition. With heavy sarcasm,  Punch declared that the government had “determined that as they cannot afford to give hungry nakedness the substance which it covets, at least it shall have the shadow. The poor ask for bread, and the philanthropy of the State accords — an exhibition.” 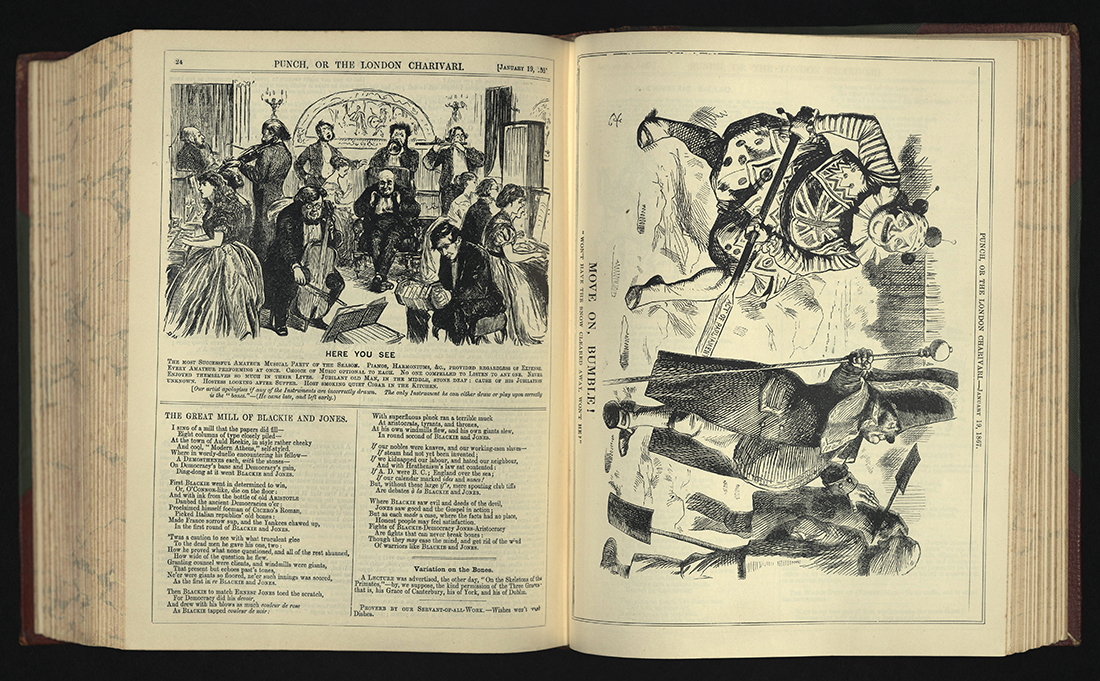 From that issue onwards, Punch replaced its “pencillings” for “cartoons” and, as a result, the word stuck and became associated with pictorial satire and eventually with humorous drawings in general. John Leech became successful as the world’s first “cartoonist,” but after his death in 1864, the magazine was thrown into an existential crisis. Many felt it impossible to continue Punch without him. However, his influence was strong and several illustrators rose up to the challenge, including Charles Keene and John Tenniel. Tenniel was best known as the illustrator of Lewis Carroll’s Alice’s Adventures in Wonderland (1865). He would come to succeed Leech as the main political cartoonist for Punch. 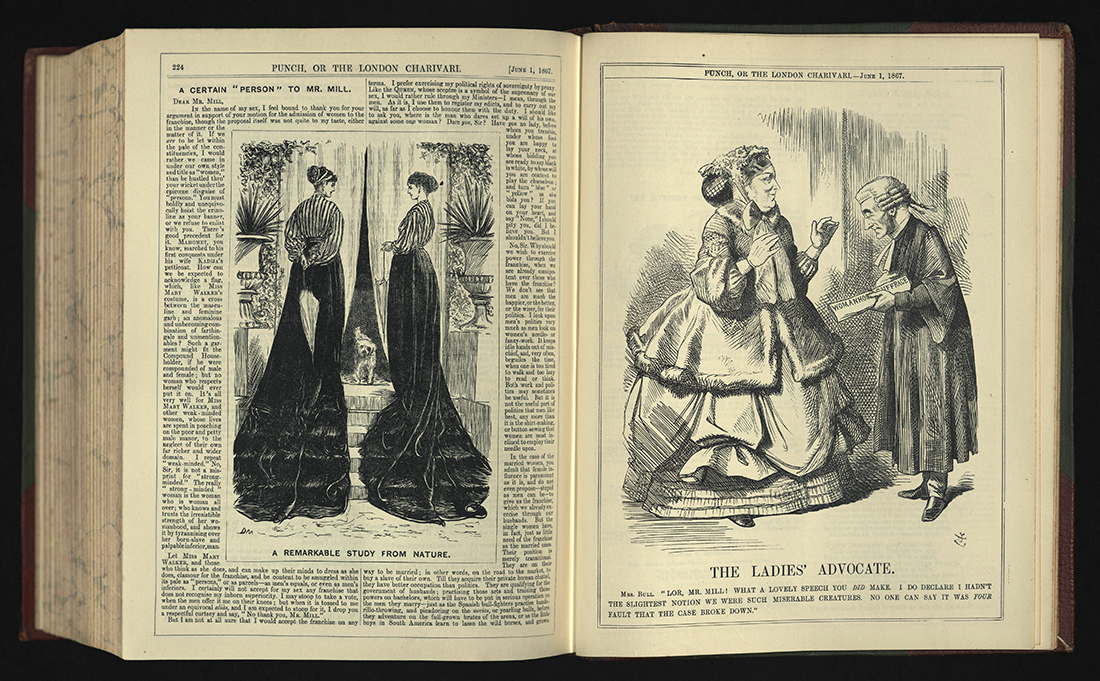 In its early years, Punch was considered radical, drawing attention toward the condition of the working class and directly contributing to the popularity of trade unionism and stricter labor laws. However, by the 1860s, the magazine had become milder and less inclined to attack the Establishment. At the turn of the century, Punch had become a national institution and its writers and artists were now household names. In a strange twist, it evolved into the voice of the British Establishment. While jokes still poked fun at the upper echelon of society, they rarely did so with a bite. During both World Wars, Punch was crucial in raising morale among its readers. As such, the magazine was greatly rewarded with increases in circulation, peaking between 1947-1948 with up to 184,000 copies sold each week. The mid century saw the magazine take on a sharper topical edge, add color, and emphasize the graphic design of the age, adding artists such as Gerald Scarfe and Ralph Steadman to their roster. Yet after more than 150 successful years, Punch had finally entered its slow and long decline. The magazine shut its doors in 1992, and despite an attempt to revive it again in 1996, Punch officially closed in 2002.