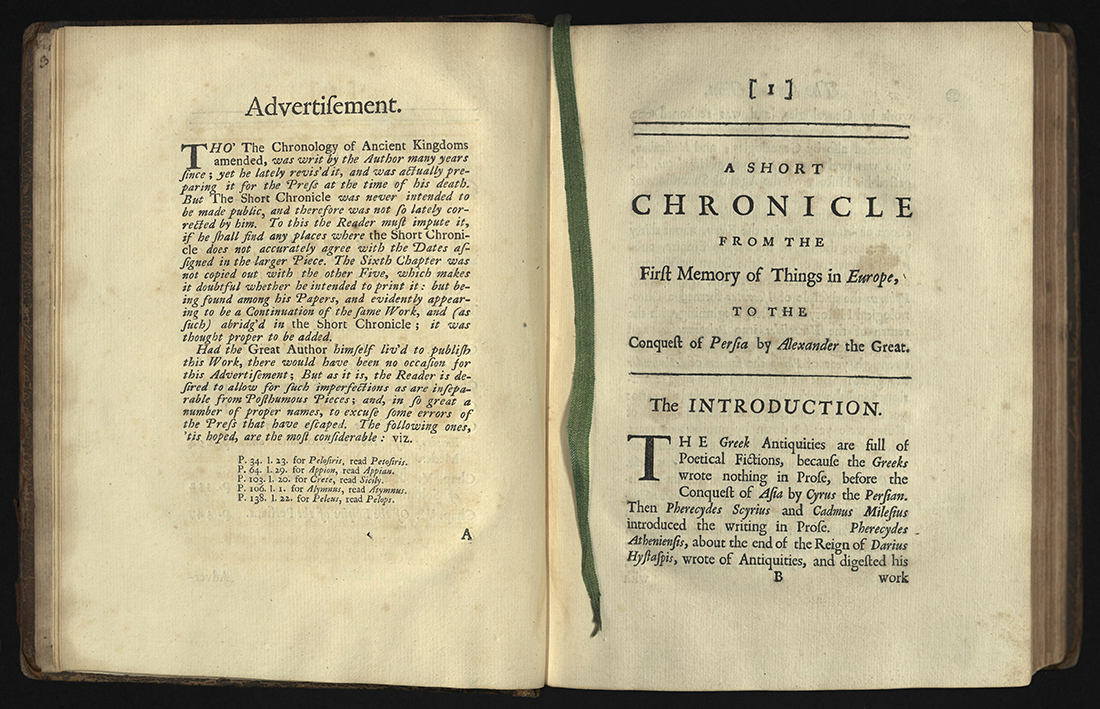 “I do not know what I may appear to the world, but to myself I seem to have been only like a boy playing on the sea-shore,
and diverting myself in now and then finding a smoother pebble or a prettier shell than ordinary,
whilst the great ocean of truth lay all undiscovered before me.” 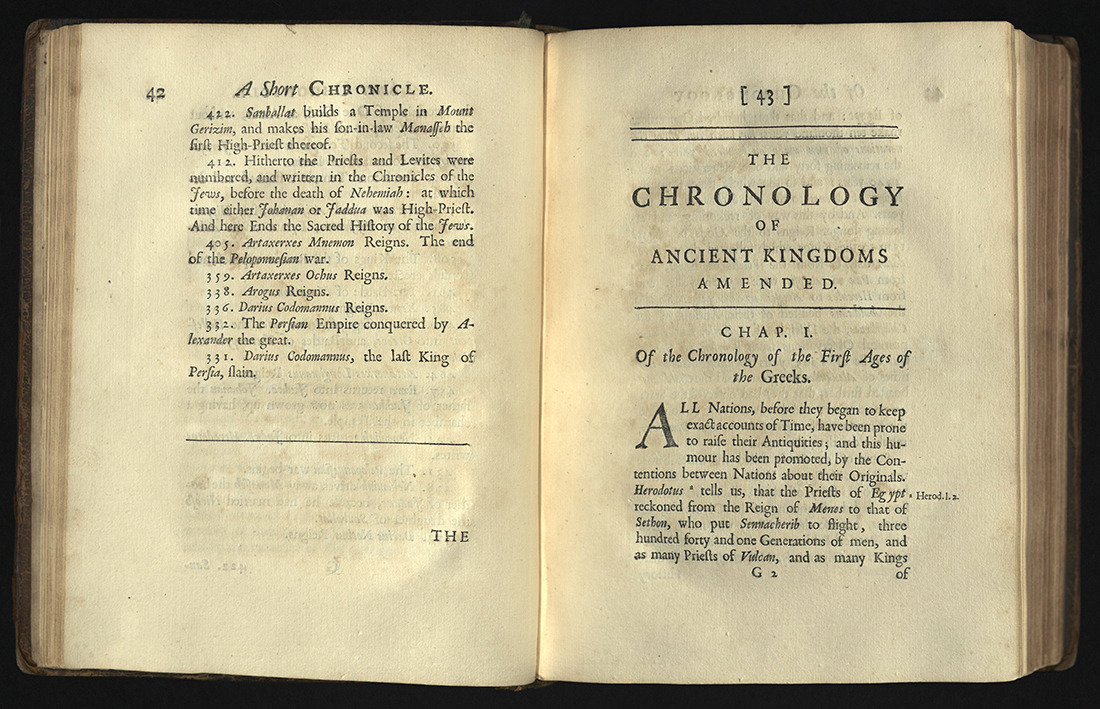 Sir Isaac Newton is best remembered for his contributions to science. Described in his time as a “natural philosopher,” Newton laid the foundation in subjects such as physics, optics, and astronomy. His magnum opus, Philosophiæ Naturalis Principia Mathematica, was first published in 1687. In it, Newton gave us the three laws of motion, defined gravity, and provided the precise mathematical equations by which it could be measured.  In addition to science, Newton’s knowledge extended into religion, politics and history — as can be seen in this posthumously published work, The Chronology of Ancient Kingdoms Amended. 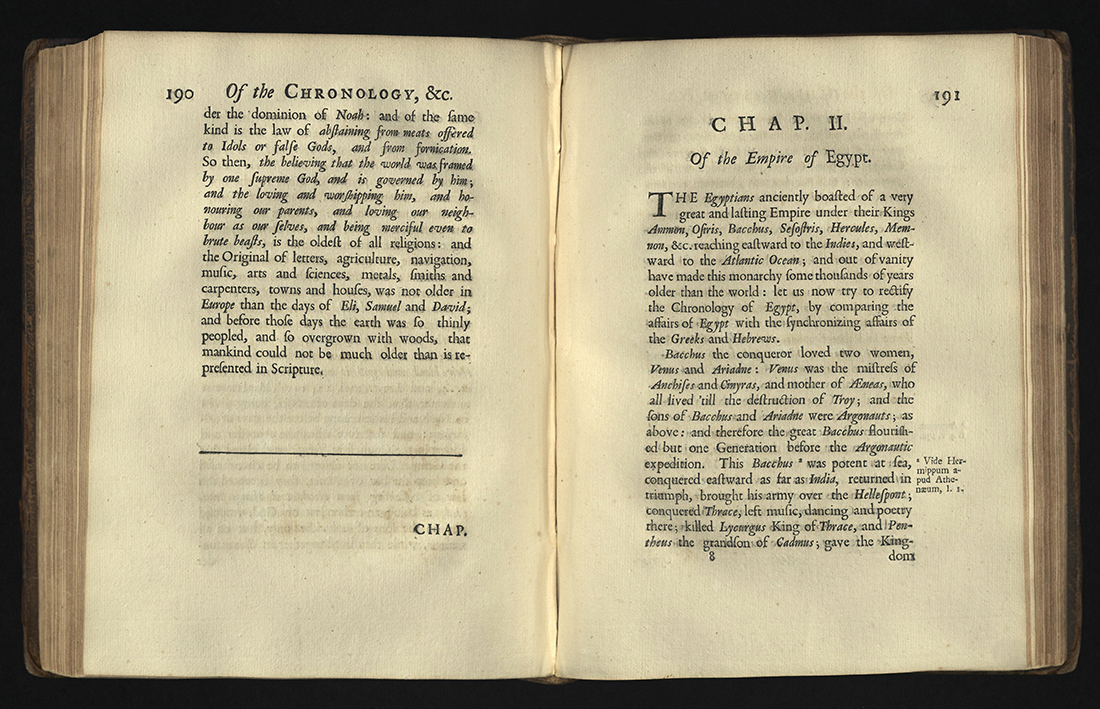 After the success of Principia, Newton began applying himself to the study of chronology. For decades, he researched classical sources ranging from Herodotus, Clement of Alexandria, and Eusebius, among many others. Newton also drew directly from Scripture, while using astronomical computations to confirm historical and Biblical dates. The result of his investigations presented a drastically revised timeline for ancient civilizations — shrinking Greek history by some five hundred years, and Egypt’s by a millennium. Newton, along with few contemporaries, grappled with one historical event in particular: the Great Flood, or the flood-myth that occurs among many cultures across the globe. 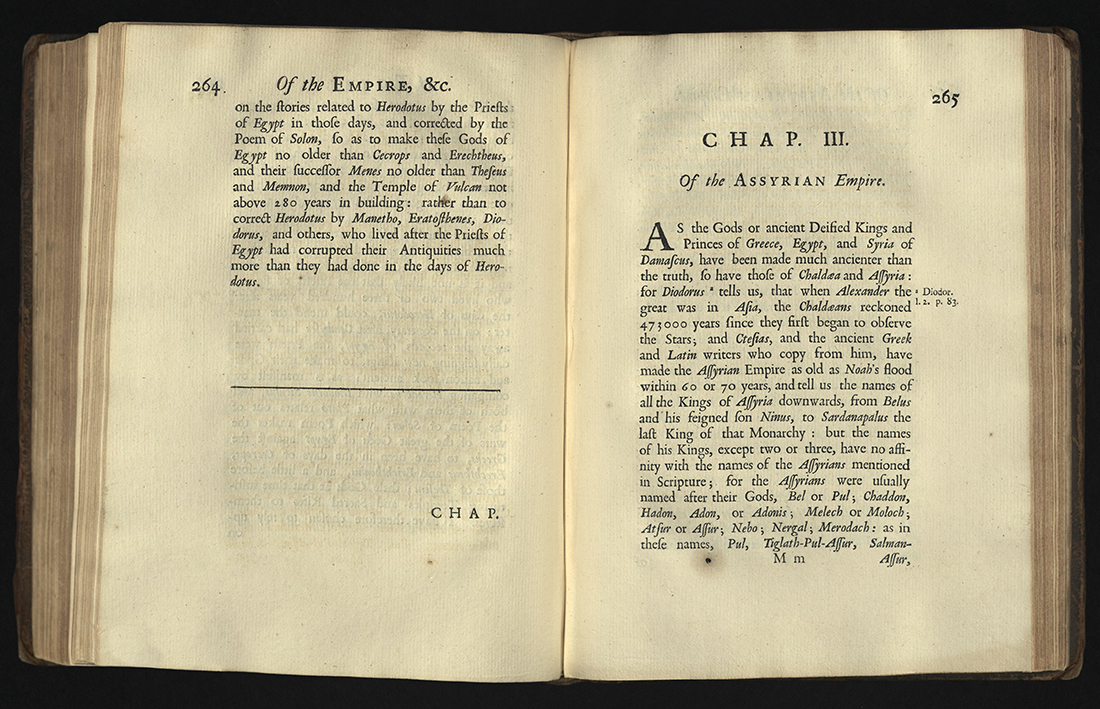 Being the mathematician that he was, Newton looked to numbers to determine the time it would take for human civilization to repopulate. In his calculations, he determined that human populations expand according to certain set of rules, which implicate certain stages in the development of any civilization. Therefore, he decided, it would be impossible for the Egyptian or Greek civilizations to have existed much earlier than the time of King Solomon’s reign. Newton argued that King Solomon was the earliest king in history, and that his temple encoded the inverse square law for universal gravitation. 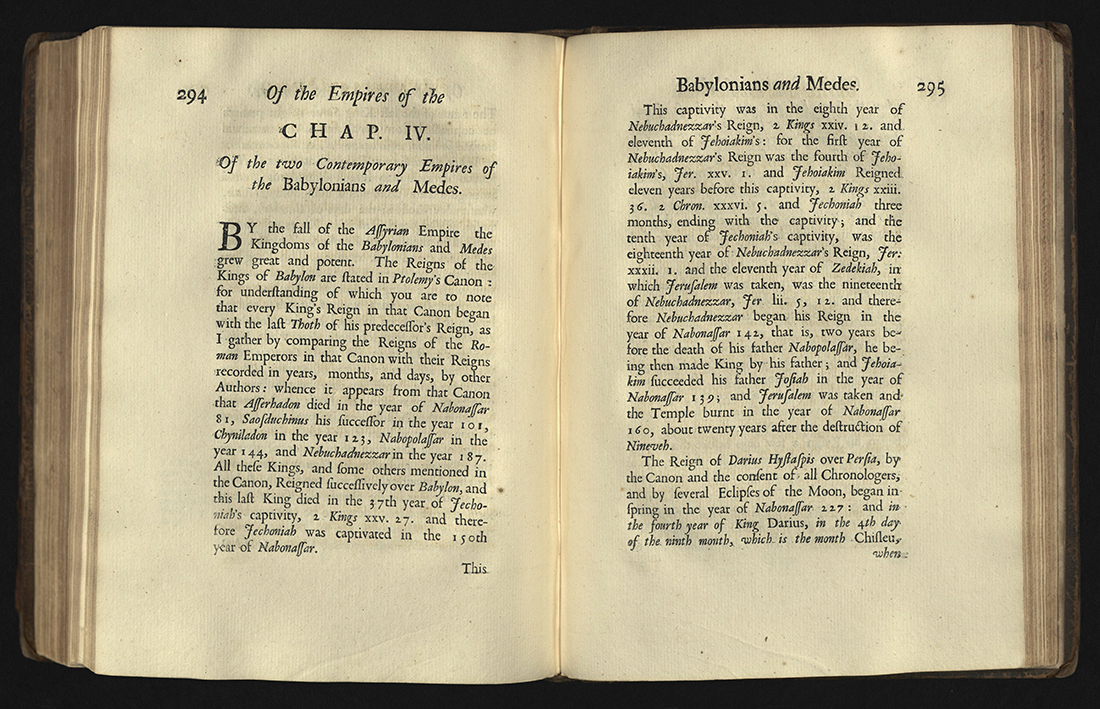 Beyond radically resetting chronology’s clock, Newton also attempted to harmonize conflicting versions of Scripture and ancient myths. In doing so, he correlated pagan mythology with Biblical events and argued that multiple deities across civilizations might actually refer to just one historical figure. Even before its publication, copies of Newton’s manuscripts and short excerpts he had written had been circulating. The content of his work created a buzz of controversy not only in England, but also throughout Europe. 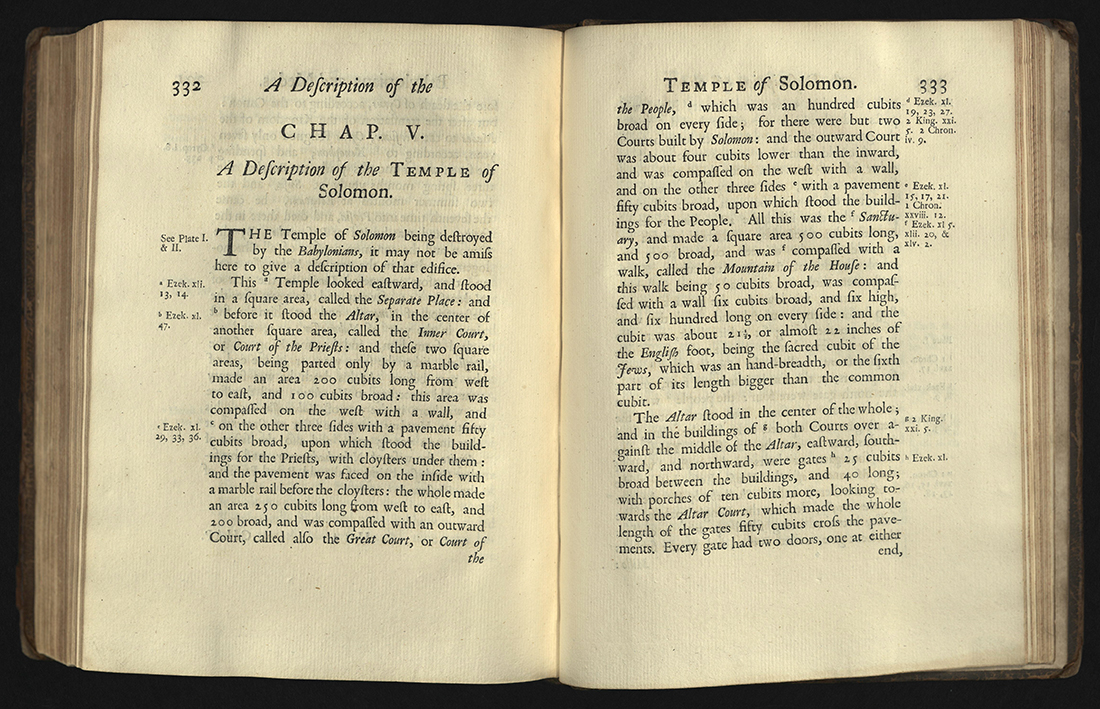 Chronology of Ancient Kingdoms Amended was first published in 1728, just one year after Newton’s death. Newton had been in conversation with the publisher of his third edition of Principia, John Innys and they had arranged to publish the collected manuscripts before the circulating work could be further plagiarized. Unfortunately, Newton died before final details could be established and Innys no longer was entrusted with the publication of Chronology. Having no children of his own, Newton’s niece, Catherine Barton, and her husband, John Conduitt, were appointed to serve as executors of his estate. 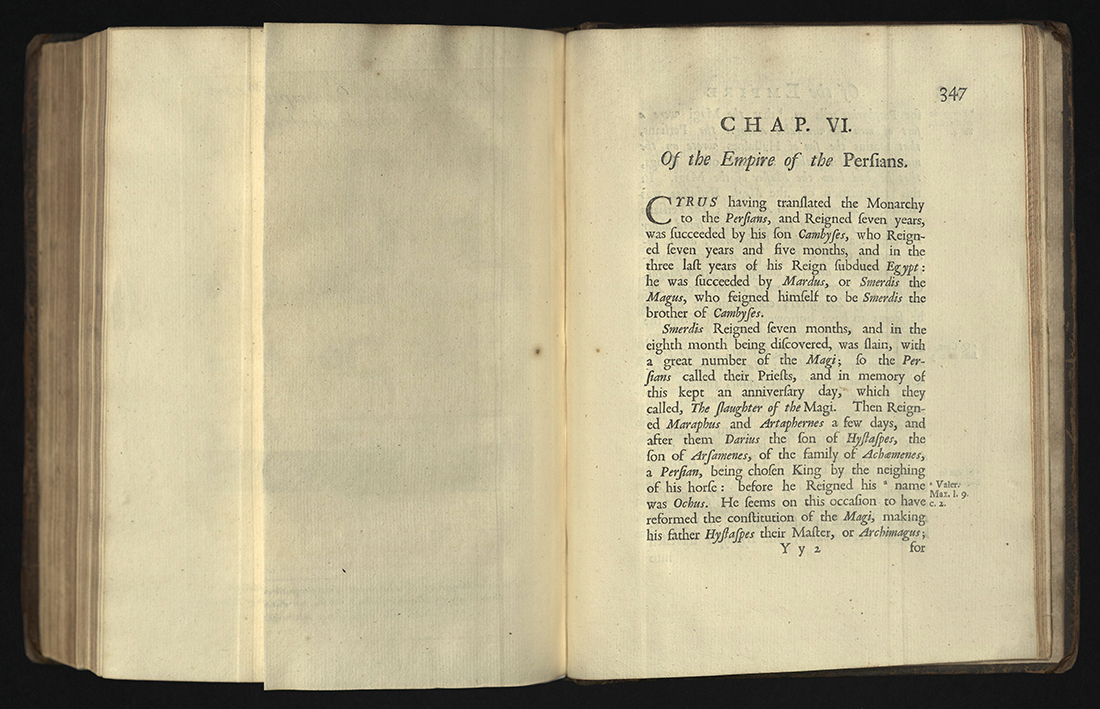 Beyond close family ties, Conduitt also worked with Newton’s office as the London Master of the Mint. After Newton’s death in March 1727, Conduitte even succeeded him to the post. Within days of Newton’s spectacular funeral at Westminster Abbey, Conduitt commissioned the physician Thomas Pellet to review the surviving manuscripts that comprised Chronology. It took Pellet just three days to determine that only five manuscripts were publishable. The rest were deemed not fit to print. Despite this, Conduitt did not waste any time handing the manuscripts over to publisher Jacob Tonson, to which he was provided a sum of £350.

The final product was completed with eight primary sections, including a twelve-page introductory letter to Caroline of Ansbach, Queen of England, written by Conduitt. The rest of the book is divided into six chapters that explore the history of ancient civilizations and empires, including the Greeks, the Egyptians, the Assyrian Empire, the Babylonians and Medes, the Persians, and a description of the Temple of Solomon. The treatise is an example of the ways in which Newton applied his unique way of thinking to problems of history, theology, and mythology. Due to the radical restructuring of history, this publication created an uproar that extended beyond England and could be felt throughout the eighteenth century and beyond.

If you’d like to learn more about ancient kingdoms, make sure to visit the Natural History Museum of Utah’s latest exhibit,  Egypt and the Time of Pharaohs.