10 Jan Book of the Week — Polygraphice… 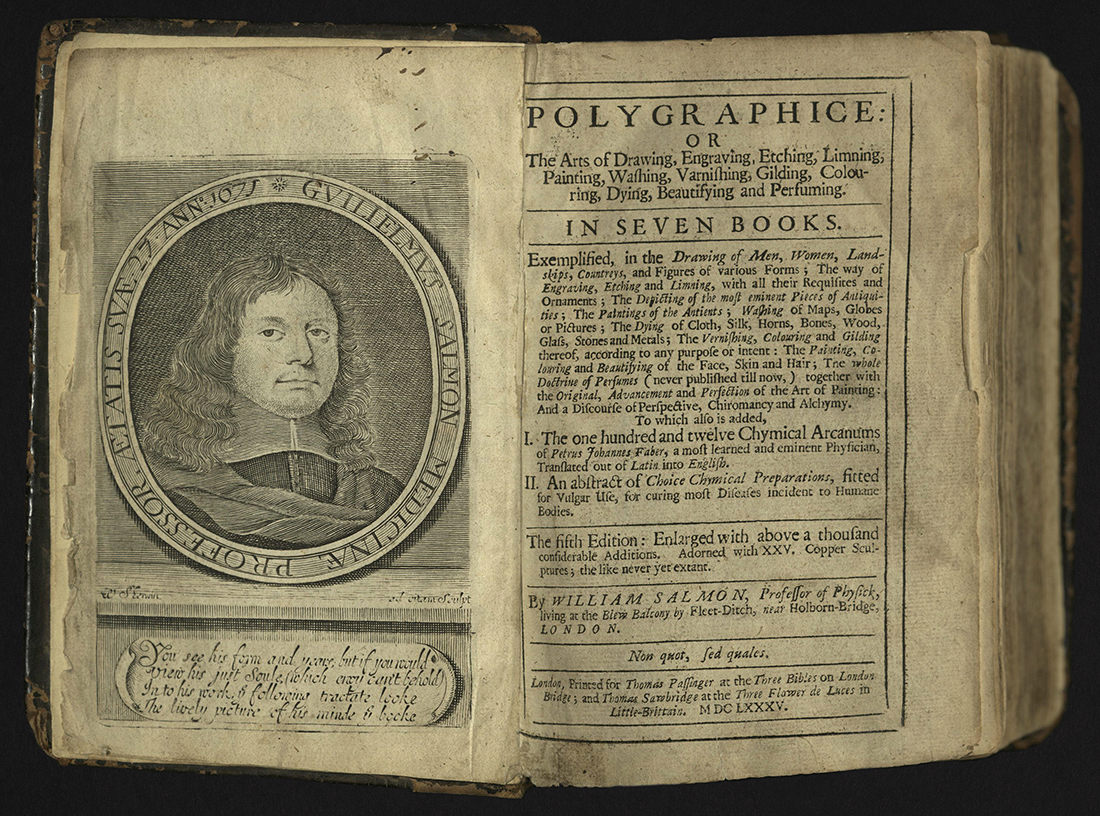 “Polygraphice is an art, so much imitating Nature, as that by proportional lines with answerable Colours, it teacheth to represent to the life (and that in plano) the forms of all corporeal things, with their respective passions.”

Little is known about the early life of the self-proclaimed “Professor of Physick,” William Salmon. Recognized during the seventeenth century as an empiric doctor and writer of medicinal texts, Salmon was often derided by other physicians as the “King of Quacks.” His reputation as a charlatan may have started when he set up a medical business near the gate of St. Bartholomew’s Hospital in London. From there, he attracted patients who did not, or could not, receive treatment at the hospital. He treated diseases, cast horoscopes, and studied alchemy. Additionally,  Salmon produced and sold medicinal products such as pills, powders, elixirs, and lozenges — all of which were advertised in his published works. 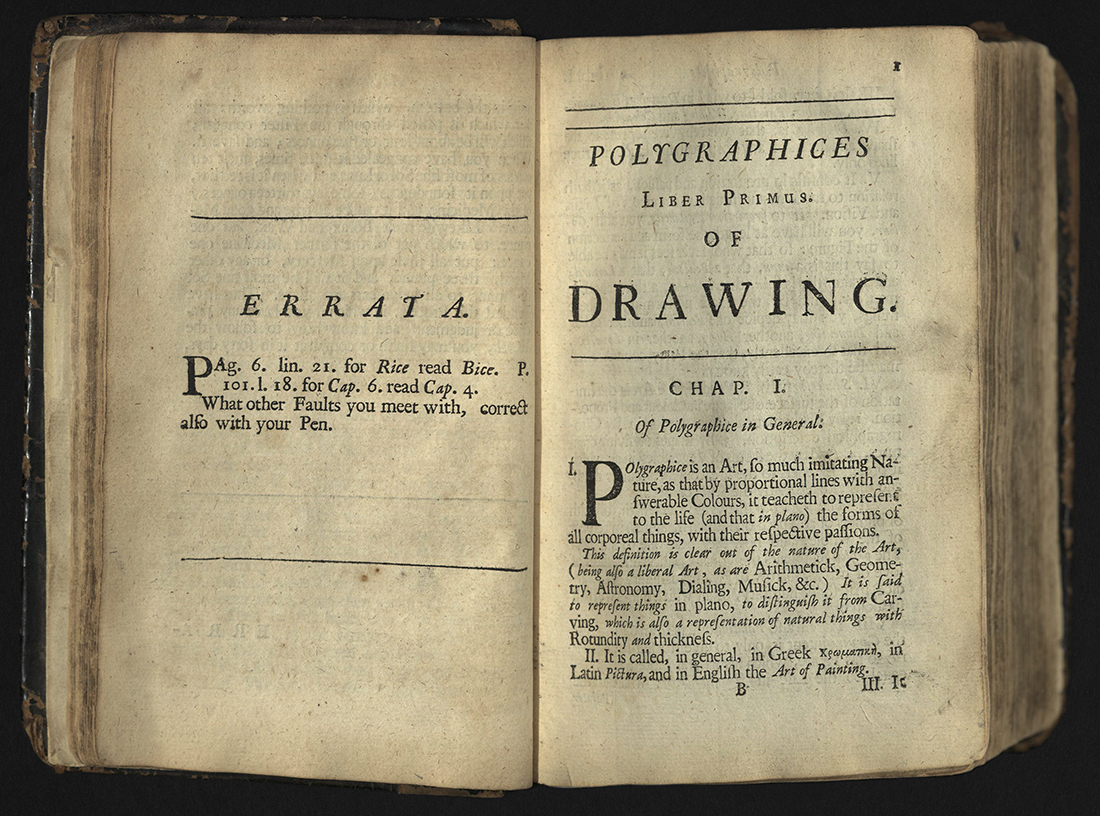 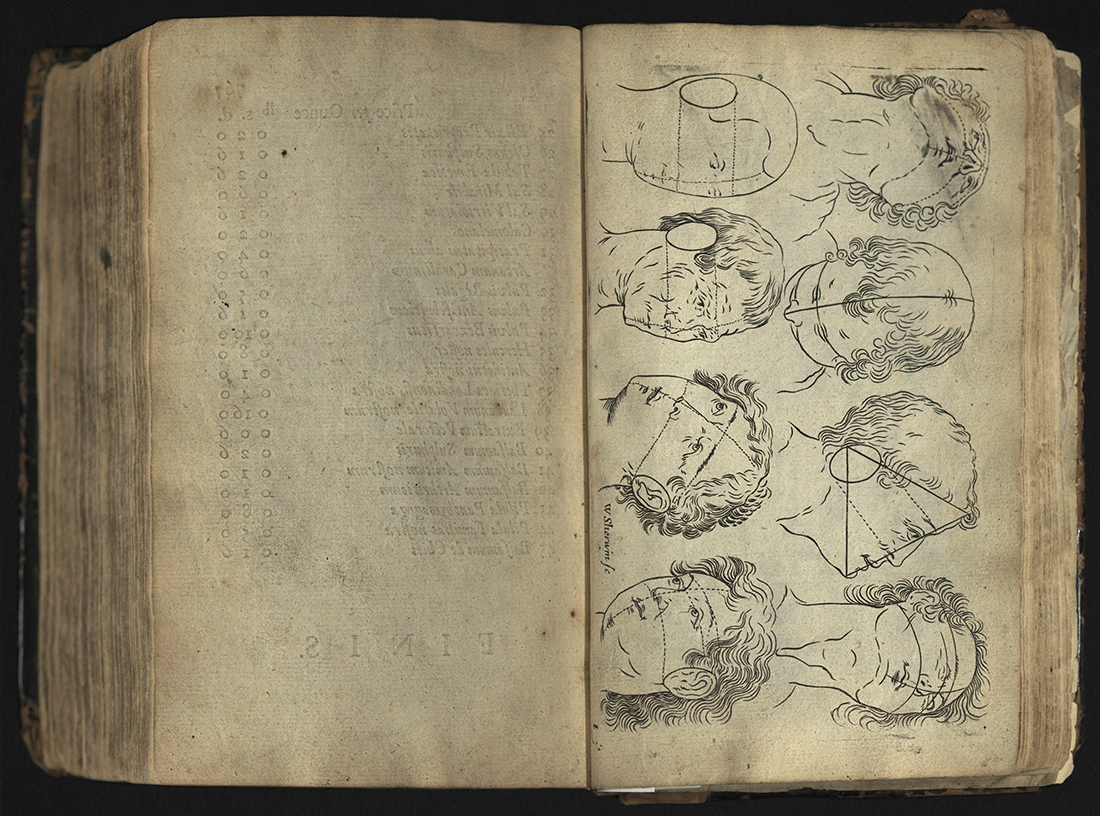 At the age of twenty-seven, Salmon expanded his enterprise into the world of publishing. His first book, Synopsis Medicinae; or, A Compendium of Astrological, Galenical, and Chymical Phsyick was published in 1671 by Richard Jones of the Golden Lion in Little Britain. The collection of texts explores the competition between various schools of medical thought in the early modern period. Rather than focus on one, however, Salmon chose to include them all in a “compendium of everything.” Even by the standards of his time, Salmon stretched the definition of “authorship.” Little of the text could be attributed as his own writing. Instead, Salmon “copied, translated, abridged, enlarged, and compiled” from the texts of others, publishing more than two dozen works under his own name. 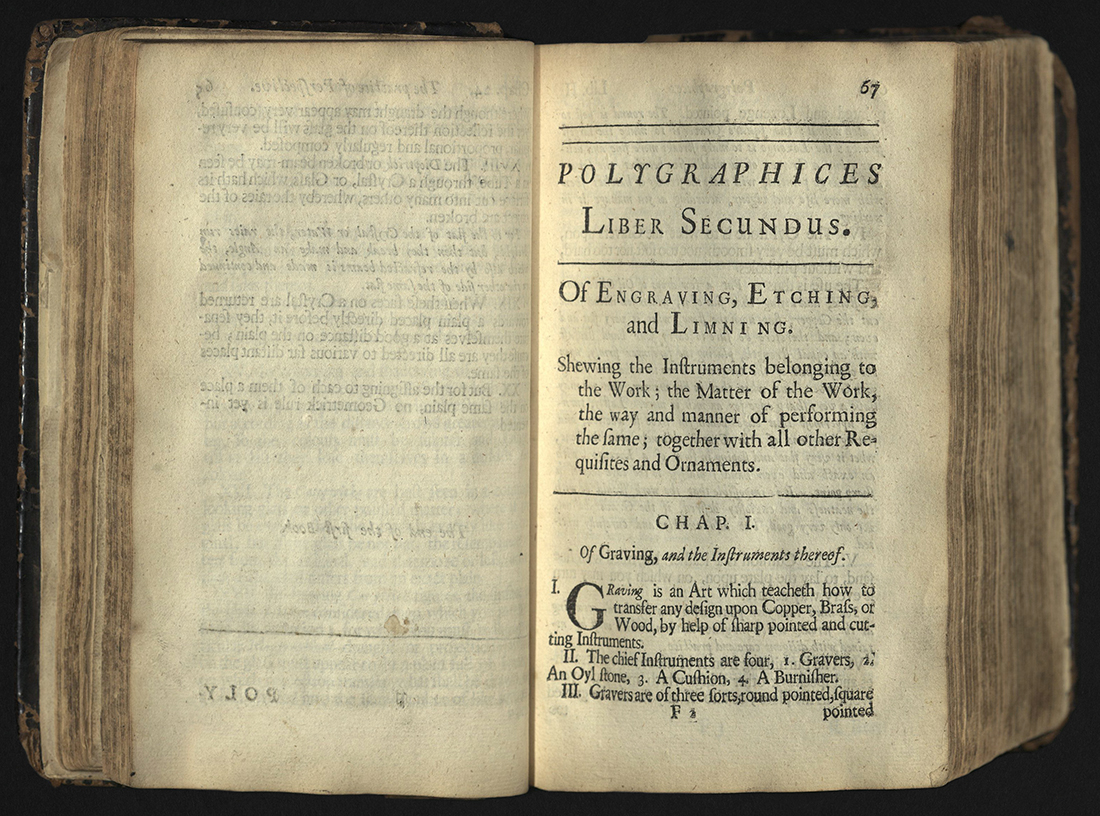 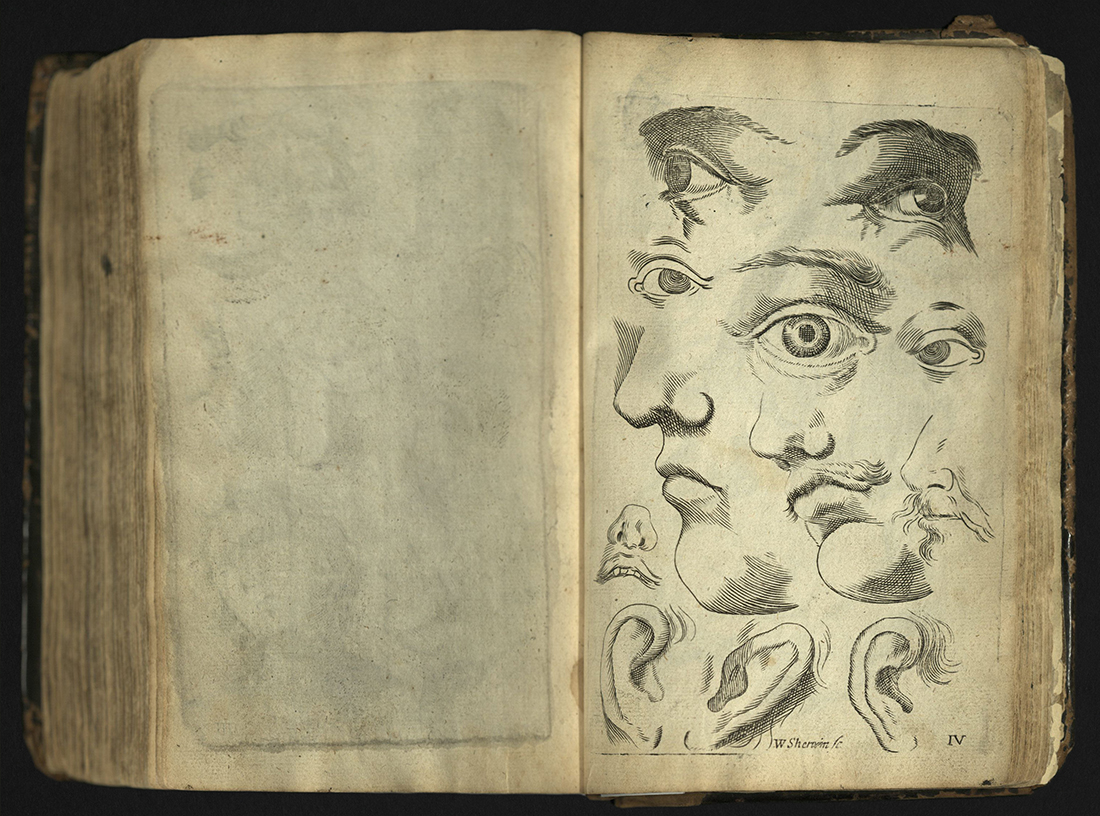 Salmon’s bibliography covers a wide range of topics. In addition to medicine, pharmacology, and surgery, Salmon wrote texts on alchemy, chiromancy, and astrology, developed almanacs that aimed to coordinate its readers health with the heavens, penned three religious tracts, and published works relating to botany and cookery. But Salmon’s most successful publication, Polygraphice; or, The arts of drawing, engraving, etching, limning, painting, washing, varnishing, gilding, colouring, dying, beautifying and perfuming was a treatise that dealt with art. The first edition of Polygraphice was published in 1672 and remained a best seller for the next thirty years, going through five revisions and eight editions until its final printing in 1701. In the final edition, Salmon boasted that the popular art manual had sold some fifteen thousand copies. 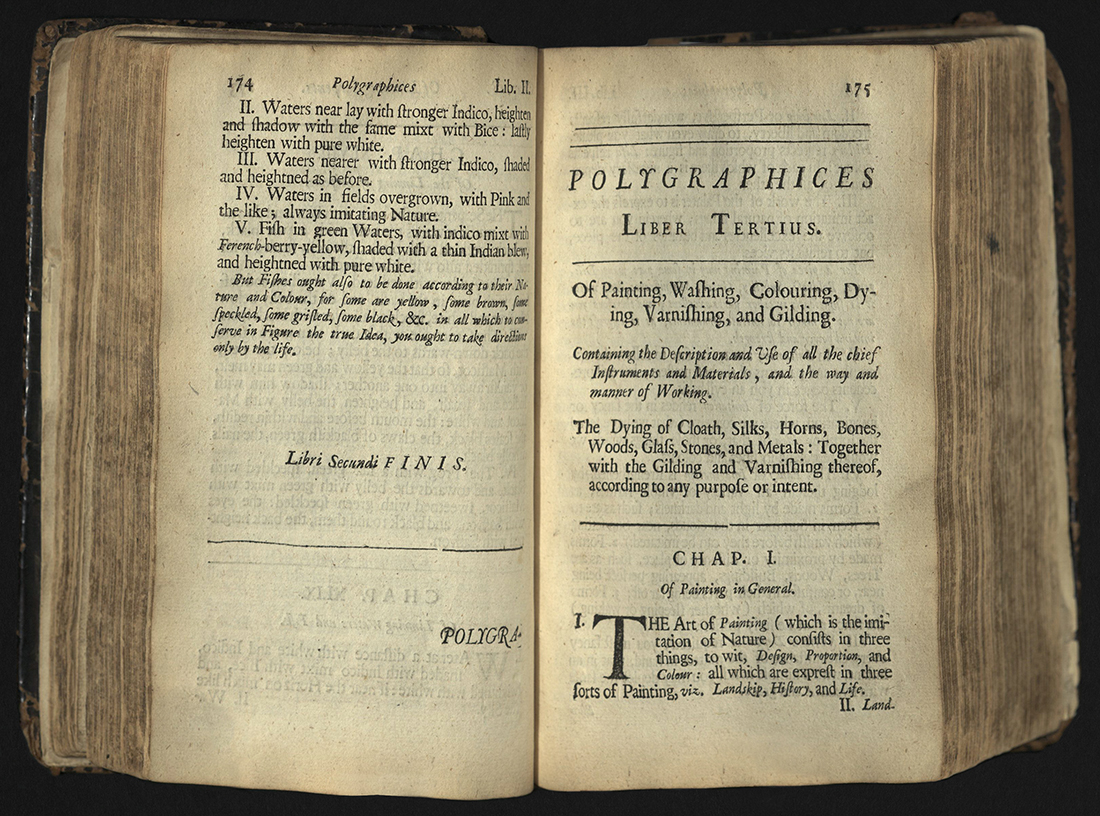 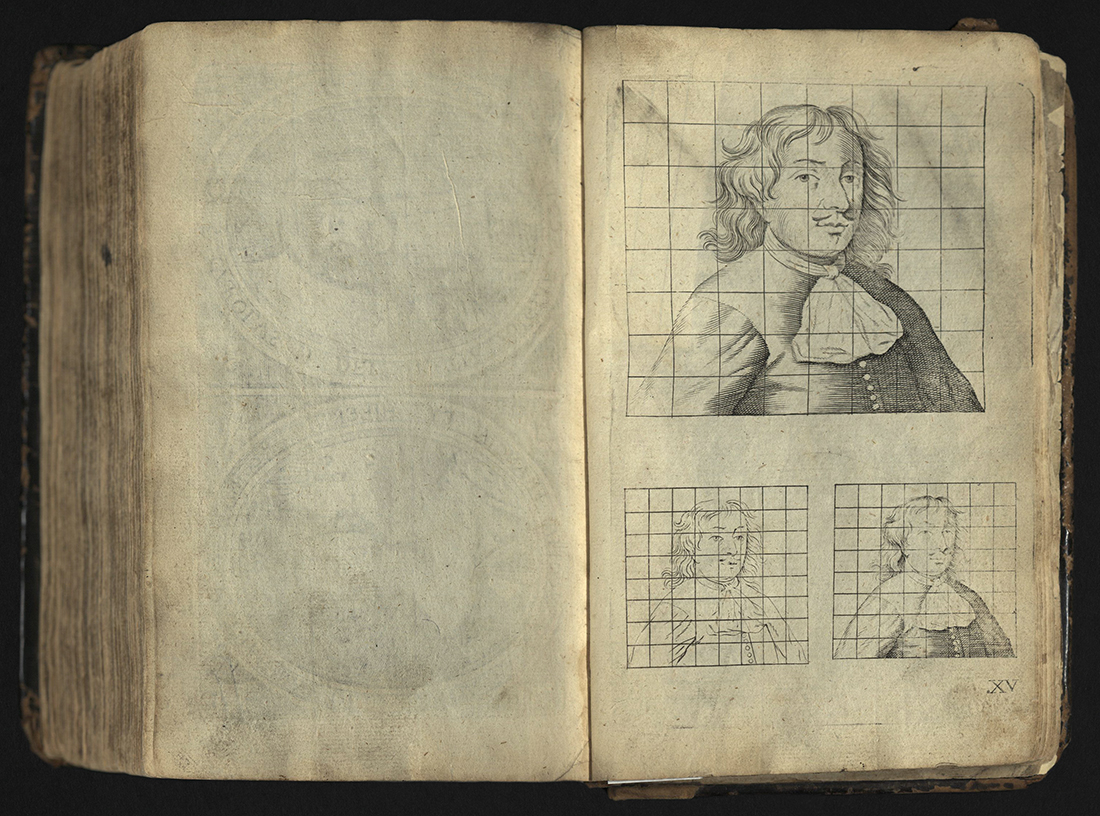 In the preface to Polygraphice, Salmon stresses the novelty of his work, which aims “to make things uncertain… limited and reduced; things obscure… plain; things tedious… short; things erroneous… rectified and corrected; things hard… facil and easy.” Comprised of hundreds of brief chapters on diverse topics, Salmon drew freely upon the works Henry Peacham, Junius, Edward Norgate, William Sanderson, Alexander Browne, Robert Boyle, and John Smith — admitting that he “made use of the best Authors [he] could possibly procure.” Subsequent editions of Polygraphice added beautiful illustrations and extended the range of topics to include cosmetics, alchemy, hermetic philosophy, and medicine. 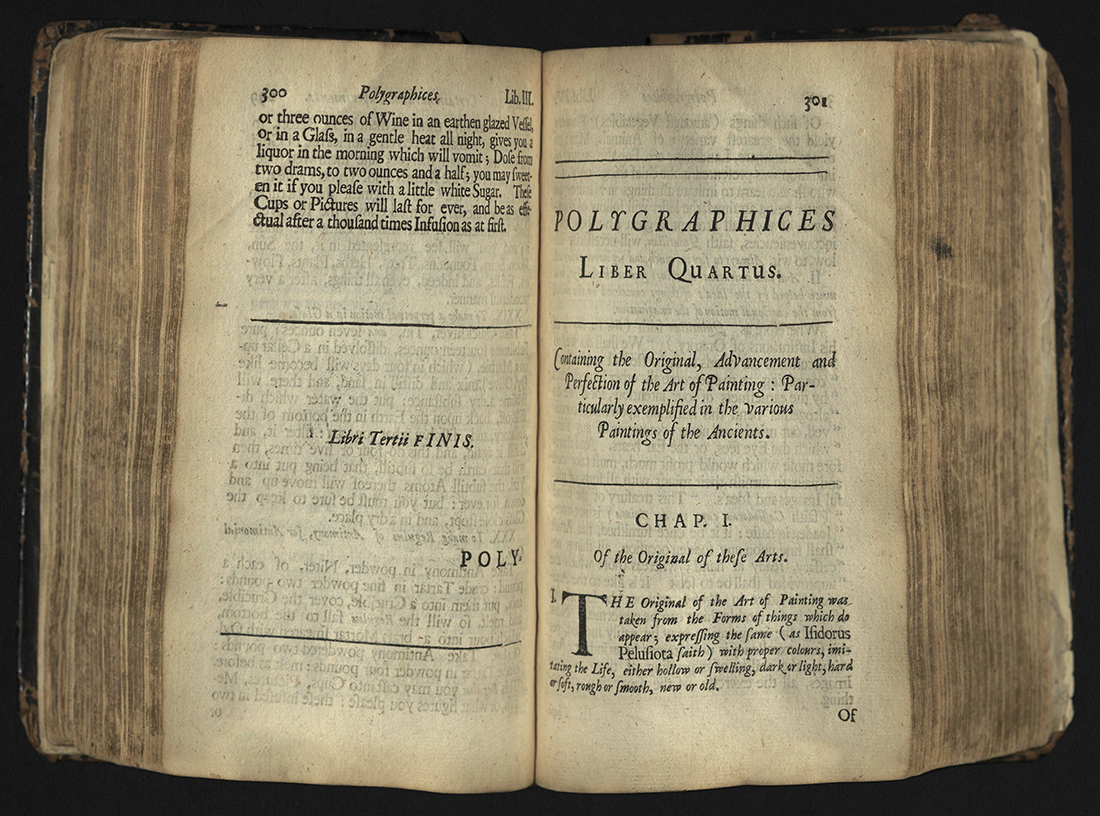 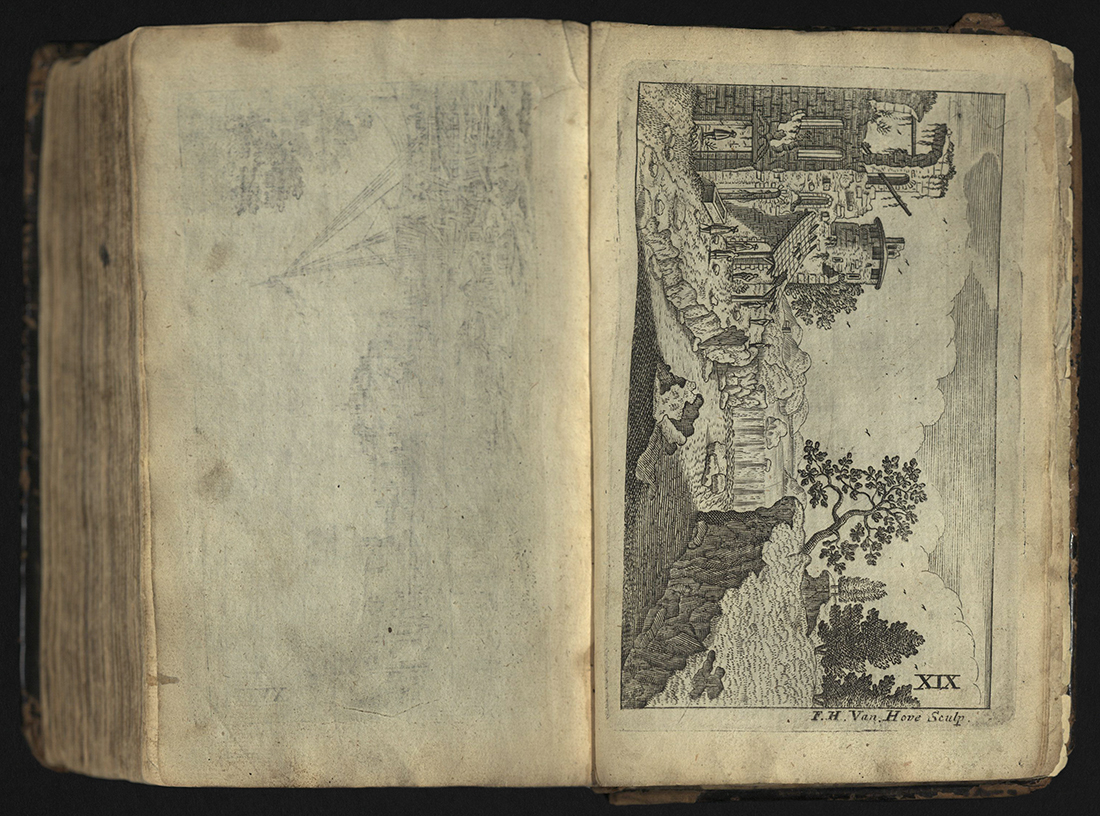 Each edition grew in page number and was adapted for an expanding art market in early modern England. Over the course of his life, Salmon’s books were found in the library’s of notable figures such as Isaac Newton, Daniel Defoe, Samuel Johnson, William Congreve, and Horace Walpole. But the audience of Polygraphice also went beyond professionals and elite institutions — finding itself, surprisingly, a favorite among middle and upper class women. Salmon understood the importance of England’s rising literacy rates, and ensured that his publications were accessible and available to the broadest demographic. 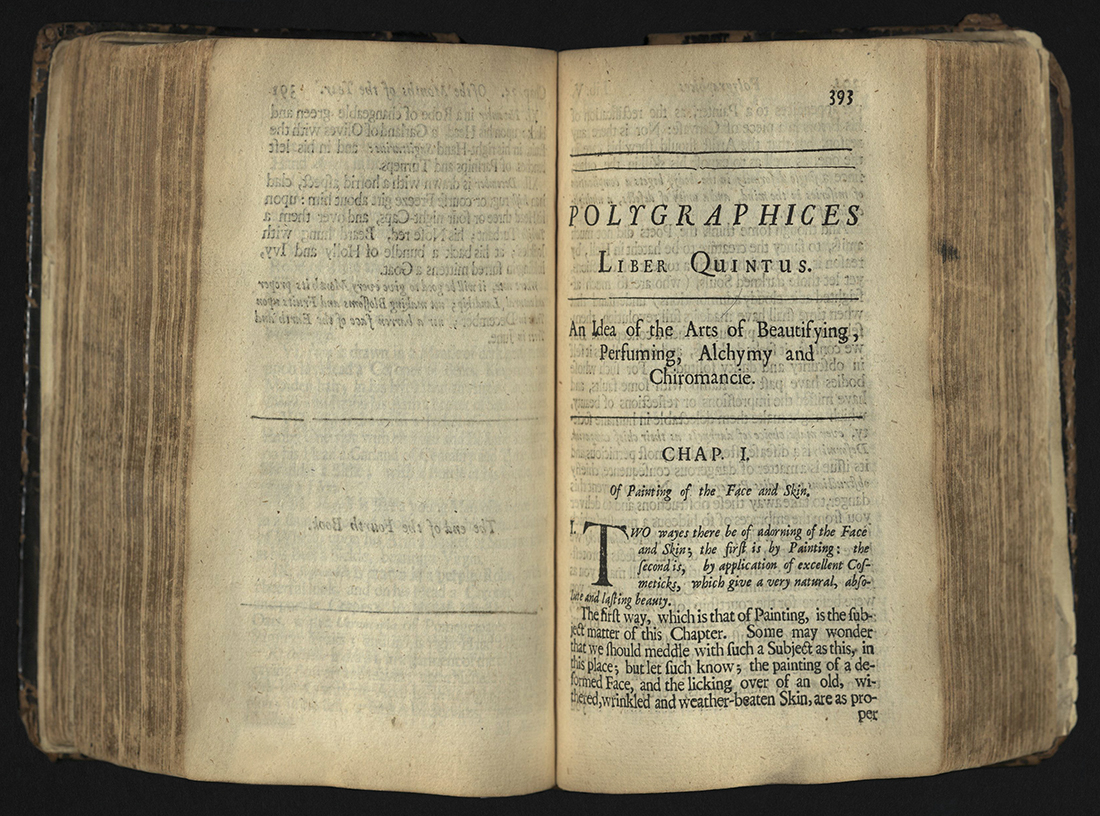 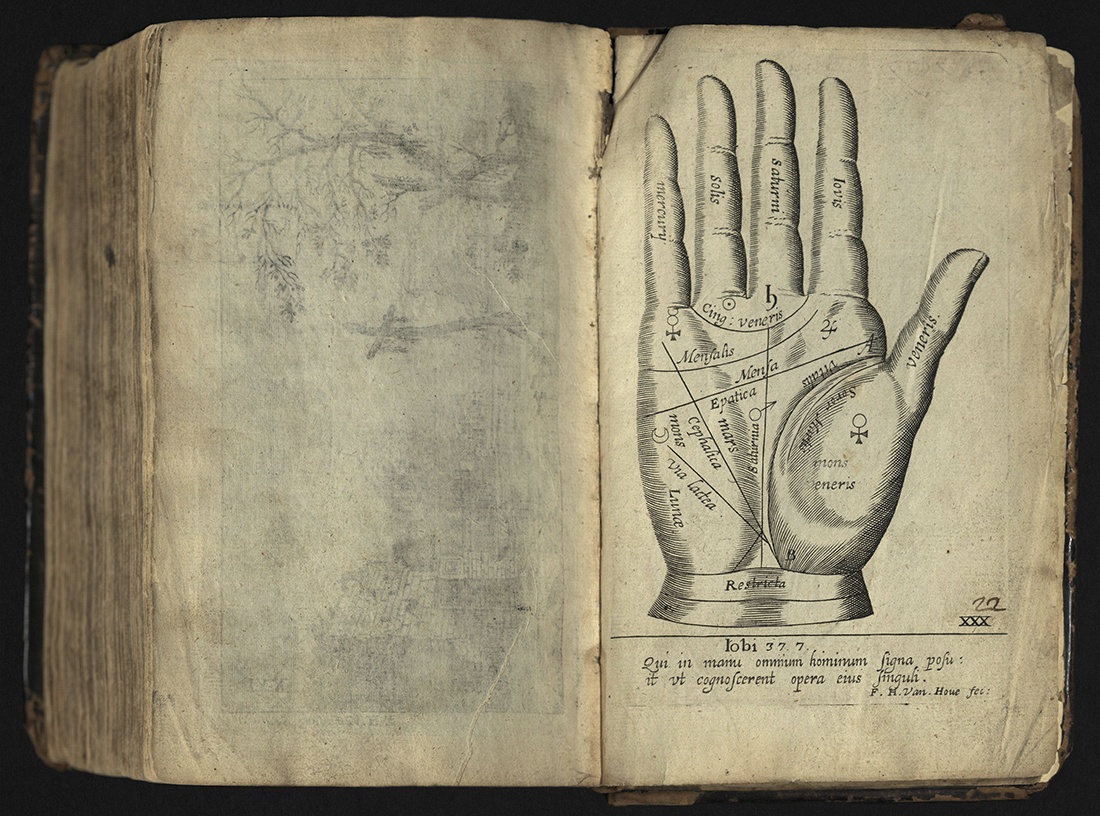 The first edition of Polygraphice was shy of three hundred pages and included no illustrations other than its frontispiece. It was dedicated to Peter Stanley of Alderley, who seems to have consulted Salmon professionally. The second edition, printed just one year later in 1673, grew to more than three hundred and fifty pages, and added fourteen plates in addition to a new frontispiece — a portrait of Salmon — and a decorative half-title page featuring ancient Greek figures Zeuxis and Apelles. This edition was dedicated to Henry Howard, an English nobleman, politician and poet. The next revision remained consistent throughout four editions, from 1675-1681. It was over four hundred pages and included a total of twenty illustrative plates. Chapters were enlarged and discussions on chiromancy, alchemy, metals and hermetic philosophy were included. The seventh edition, printed in 1685, added some one hundred pages, five plates, and more material on alchemy and medicine. This edition was dedicated to Whortley Whorwood, a supporter of the arts. The last printing of Polygraphice came out in 1701. Expanded throughout, the volume ballooned to almost one thousand pages in total. This final edition was dedicated to Godfrey Kneller, the leading portrait painter in England. 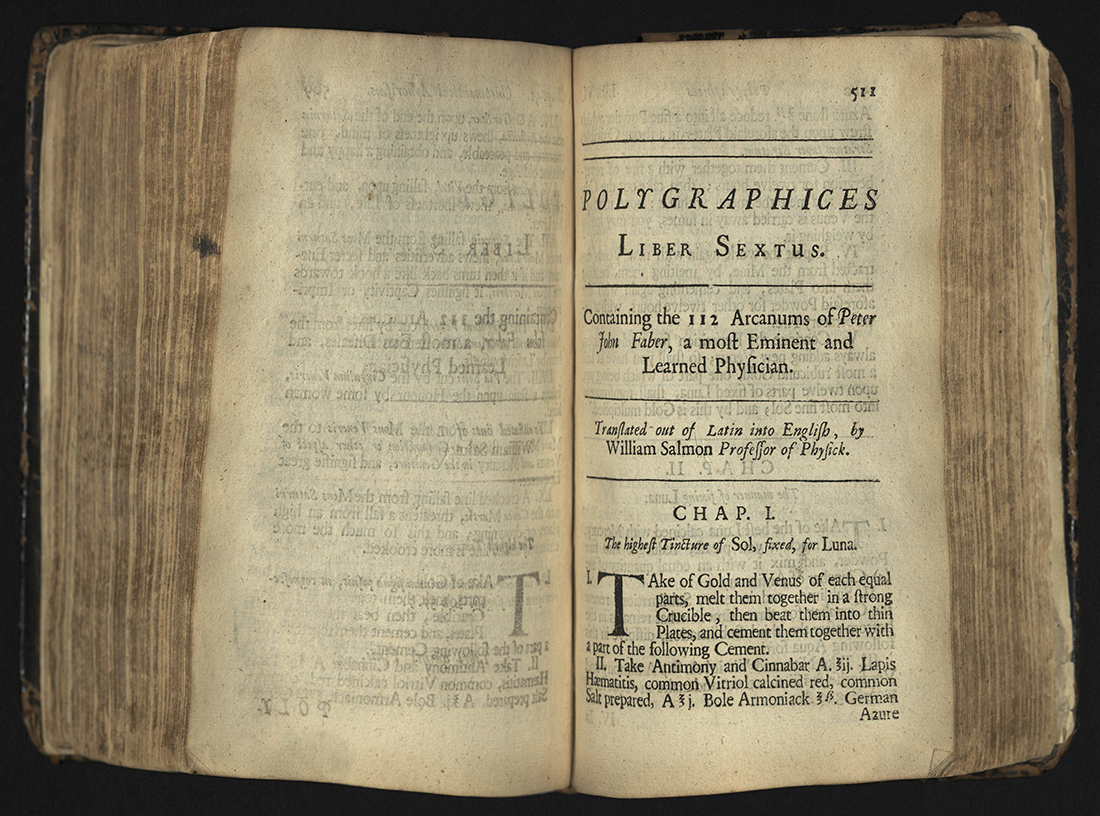 While one can debate whether Salmon was the “King of Quacks” or the “Professor of Physick,” there is no doubt he was savvy when it came to business. Advertisements for his “Family Pills” and other elixirs could be found throughout his publications. Between his medical practice, prescription sales, and the money he made from his books, Salmon is presumed to have had a considerable income for a man of his time. As such, he acquired an extensive library and owned many scientific and mathematical instruments, including two microscopes and a calculating device called Napier’s Bones. By the end of the seventeenth century, William Salmon had become a household name. 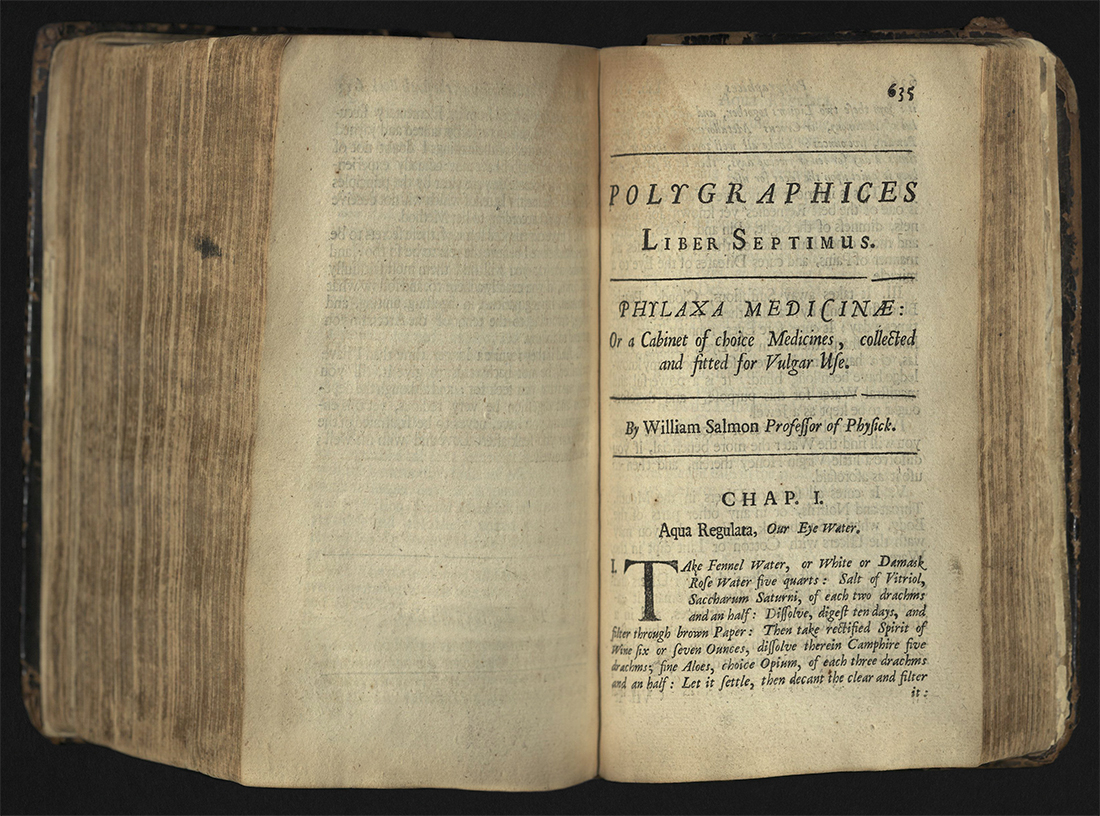 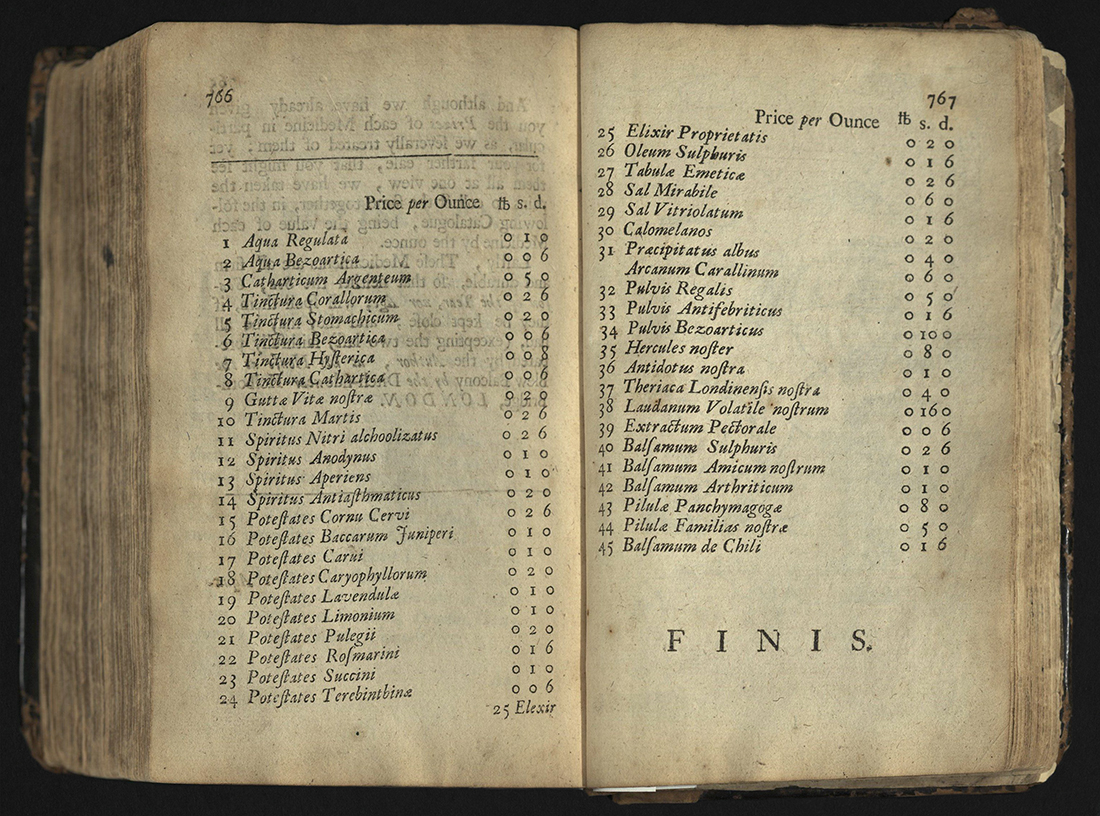 Polygraphice mixed theory with basic art instruction, provided explanations of techniques and media, and extended its knowledge toward medicine and philosophy. The seemingly odd collection of disjointed materials shaped the ways in which modern art and medicine could exist within the same environment. Over the course of thirty years in print, Salmon’s Polygraphice remained one of the most widely available books on art.