“Fitzgerald christened it the Jazz Age, but John Held, Jr. set its style and manners. His angular and scantily clad flapper was accepted by scandalized elders as the prototype for modern youth, the symbol of our moral revolution… So sedulously did we ape his caricatures that they lost their satiric point and came to be a documentary record of our times.”
— Corey Ford, writer and humorist 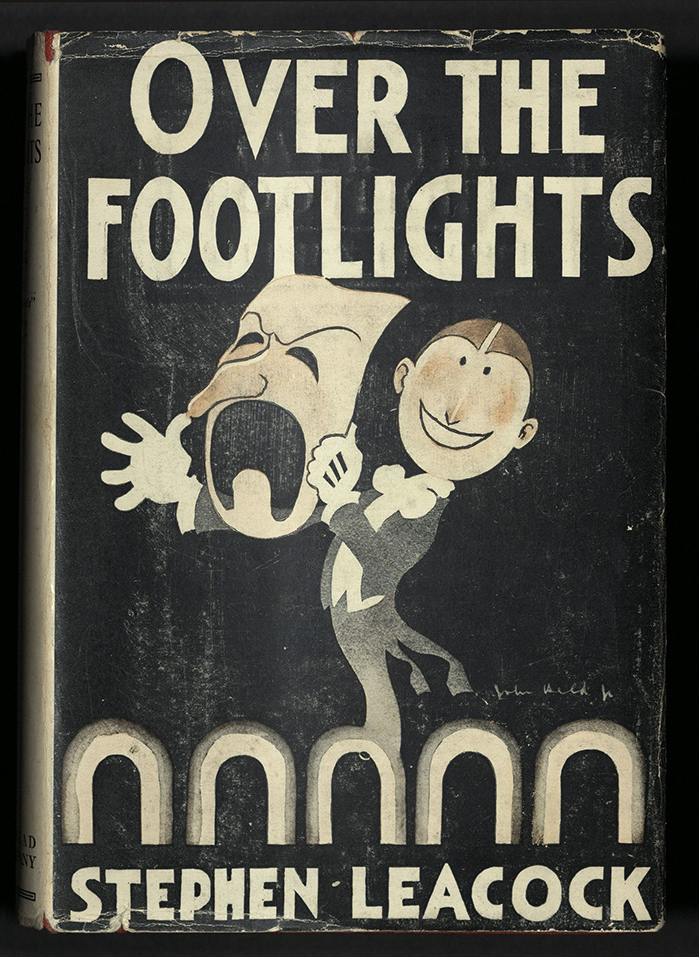 Much like today, the world one century ago was navigating a time of never-ending change. Disillusionment over the first World War brought on a loss of idealism and a search for new values. As a result of lost faith, many Americans focused on material things, believing that — so long as the problem was mechanical — humankind could solve any issue. Society and culture proved that they could indeed reshape their environment through rapidly changing technology (for better or for worse). Yet the most unsettling aspect of the early twentieth century was the awareness that, perhaps, the real problem might be people themselves. In turn, materialism promulgated and appealed to the masses during the decade of the 1920s. Pure sensation often controlled publicity, so it was no wonder that America’s heroes were sports figures, movie stars, gangsters — and cartoonists.

In American Cultural mythology, the 1920s conjure up images of bathtub gin, raccoon coats, and the impossibly thin, short-skirted “flappers.” While F. Scott Fitzgerald nicknamed the period “the Jazz Age” and wrote novels that chronicled the lifestyles of the young and fun-loving, many of the period’s most enduring visual images were created by one of Utah’s most famous artists, John Held, Jr. 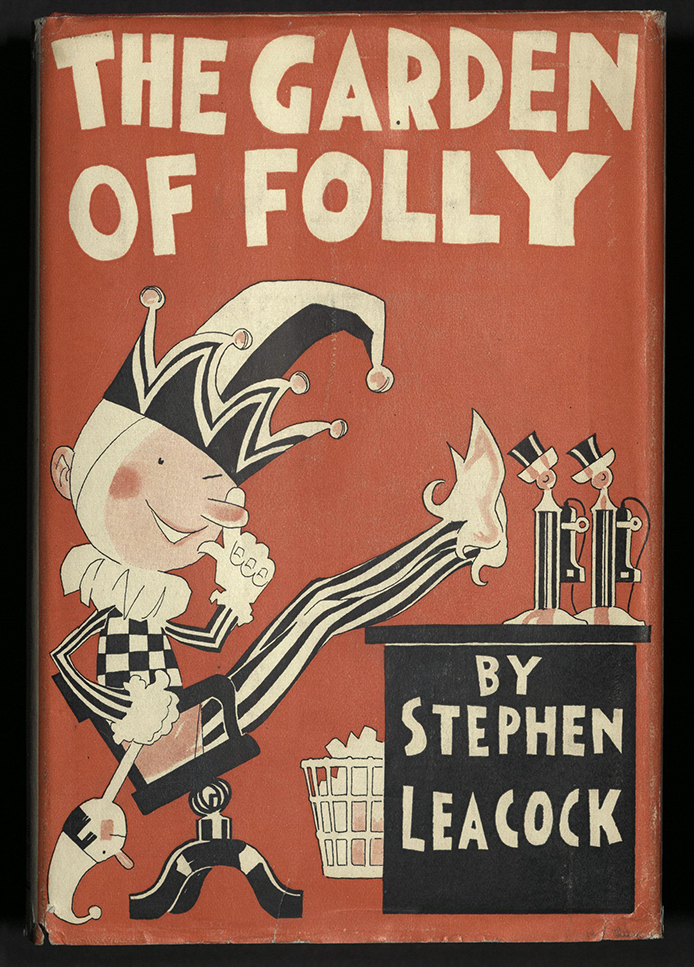 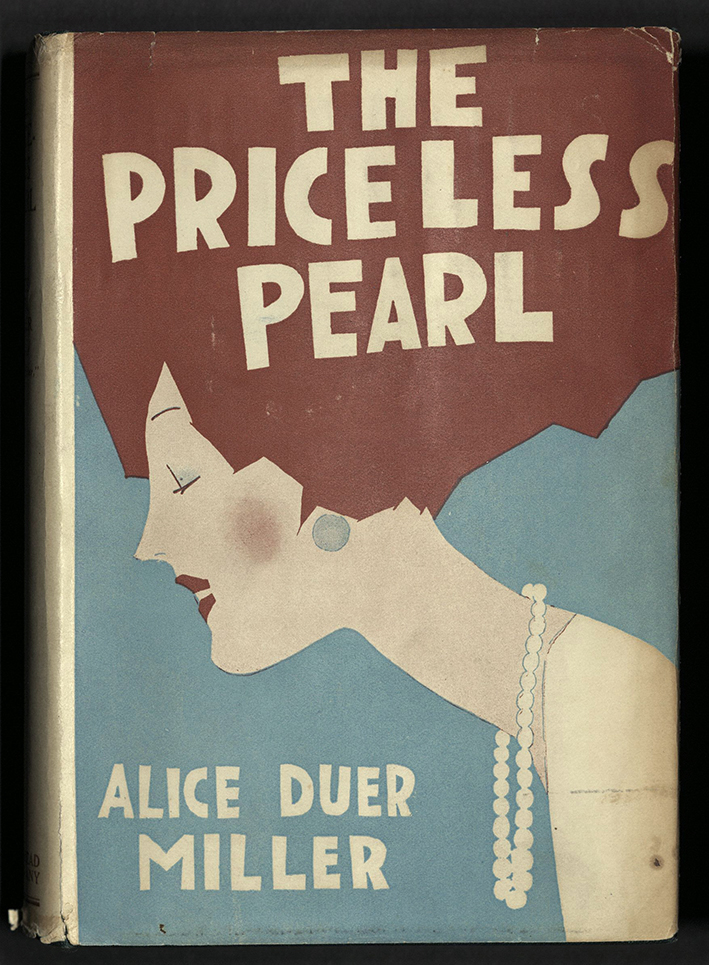 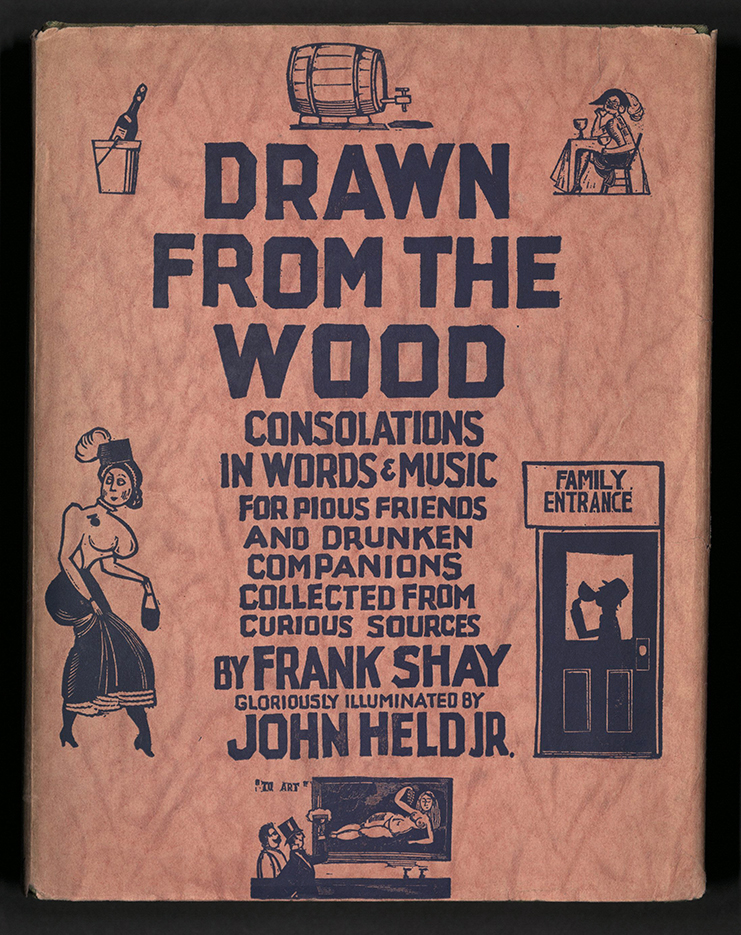 John James Held, Jr. was an American cartoonist, printmaker, illustrator, sculptor, and author. One of the best-known magazine illustrators of the 1920s, his uniquely styled cartoons depicted people dancing, driving, playing sports, and engaging in other popular activities of the era. Held was born in Salt Lake City on January 10, 1889 — the first of six children born to John and Annie Evans Held. Held Sr. and his sister had been “discovered” by University of Utah president, John R. Park in Geneva, Switzerland in 1870. Park had been traveling and looking for young and talented individuals to bring back to Salt Lake City with the hopes of training them to become educators at the growing university. The two children were adopted and raised in the Park household for ten years, until their parents arrived to join them. During their adoptive life in the Park family home, they were baptized into the Church of Jesus Christ of Latter-day Saints and raised in an atmosphere of cultural refinement and intellectual growth. Although Held Sr. did not become an educator, he did find success as an engraver, draftsman, entertainer, and leader of one of Salt Lake City’s most popular bands. 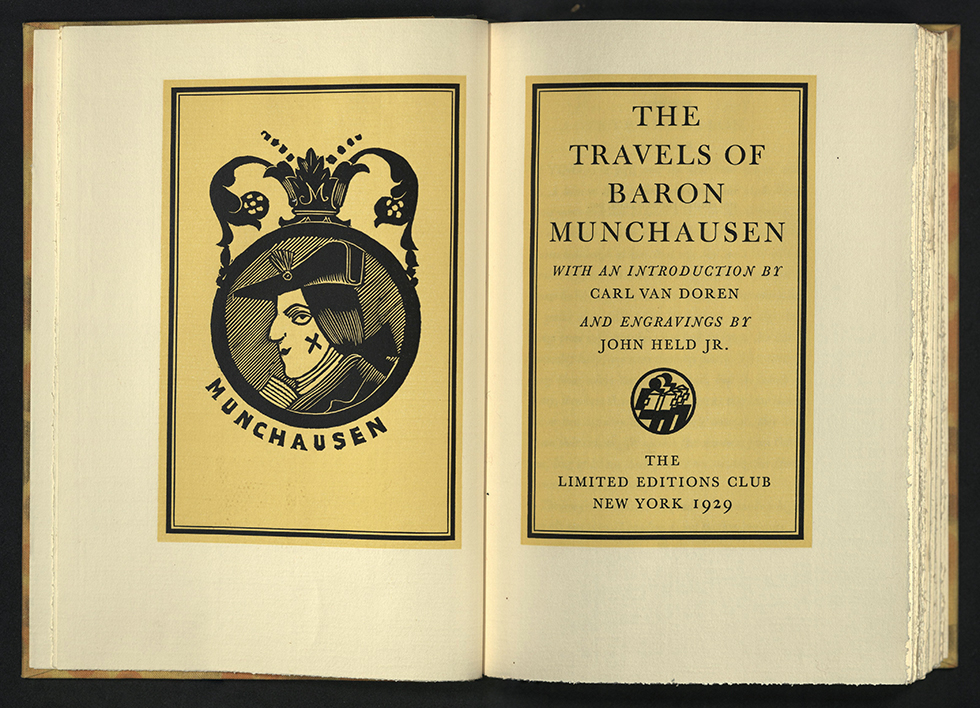 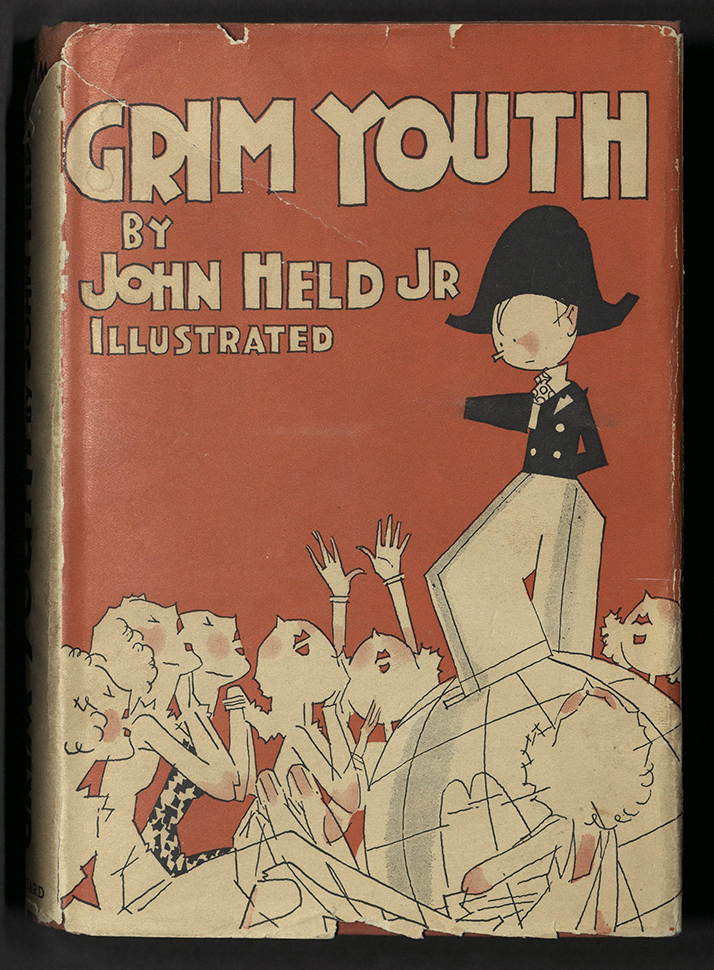 Perhaps inspired by his father’s engravings for The Story of the Book of Mormon (1888), John Held, Jr. cultivated his interest in the visual arts at an early age. His first drawing was of a horse, done in pencil on the flyleaf of a book from his father’s library, when he was just three years old. The Held Family moved from their home in the Avenues neighborhood to the space above the Held Pen Shop on Main Street — where Held Sr. sold printing work, stationary, and a fountain pen, which he had invented. His engraving jobs often included cards for the bordellos. The cards, artfully printed on the finest rag vellum, were small enough to be passed discreetly while also fitting perfectly into a watch pocket. It was in his father’s shop where nine-year-old Jack (as he was called in his youth) made his first block print commission for the Kolitz candy kitchen located on First South. He made nine dollars on that sale, but continued earning money throughout the year engraving initials on heart-shaped friendship bracelets. However, it would be his encounters with the Salt Lake underworld that would provide the most ample source of his amusement. Years later, John Held, Jr.’s unique block prints would illustrate the wild world of 1890s Salt Lake City. 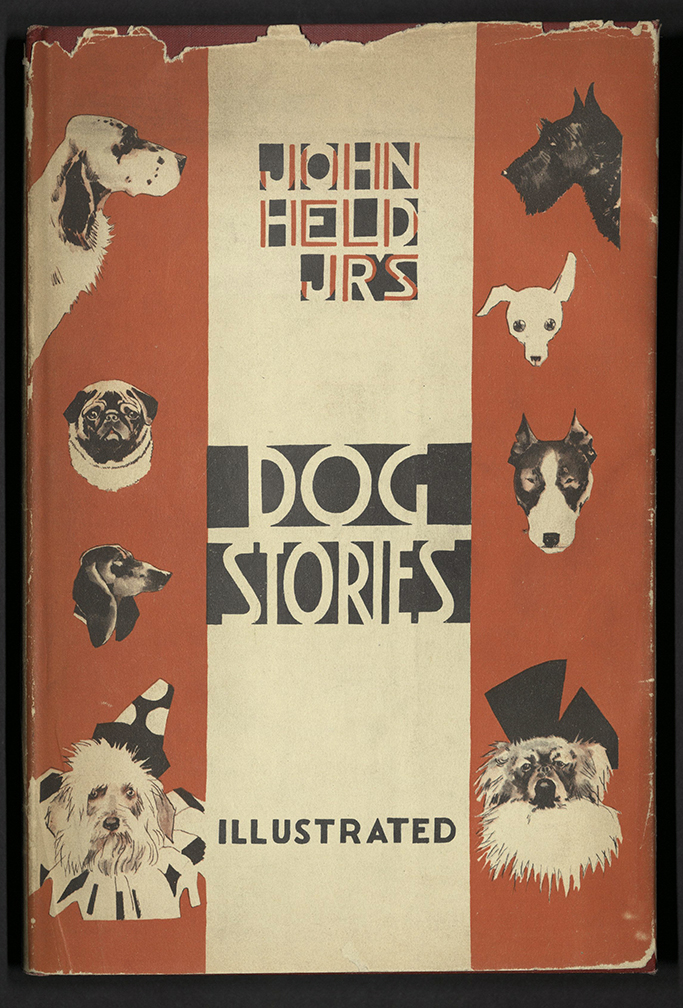 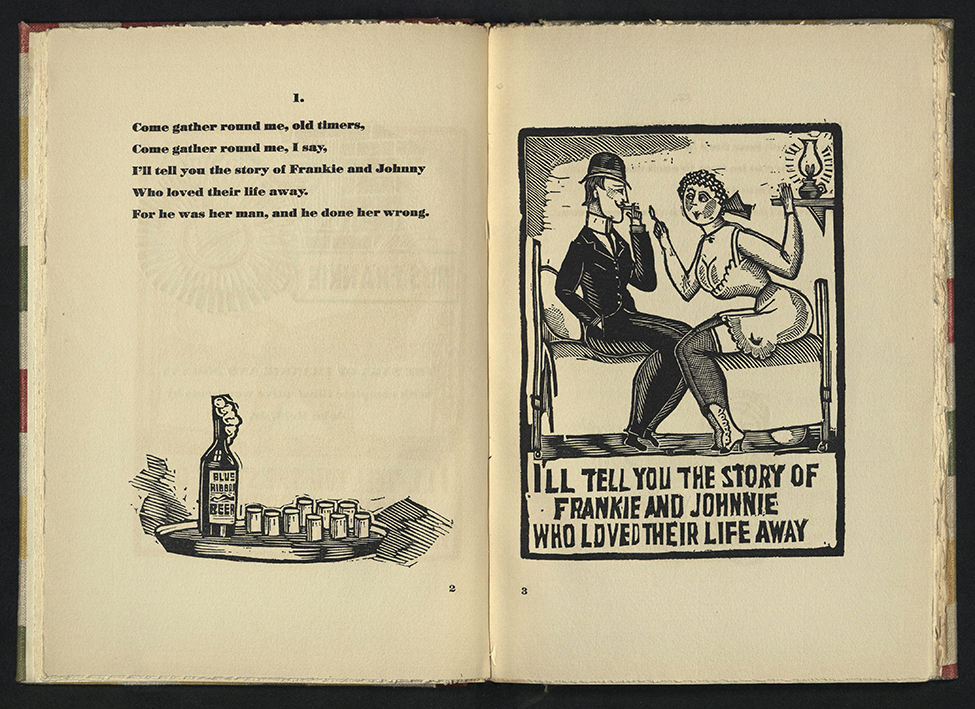 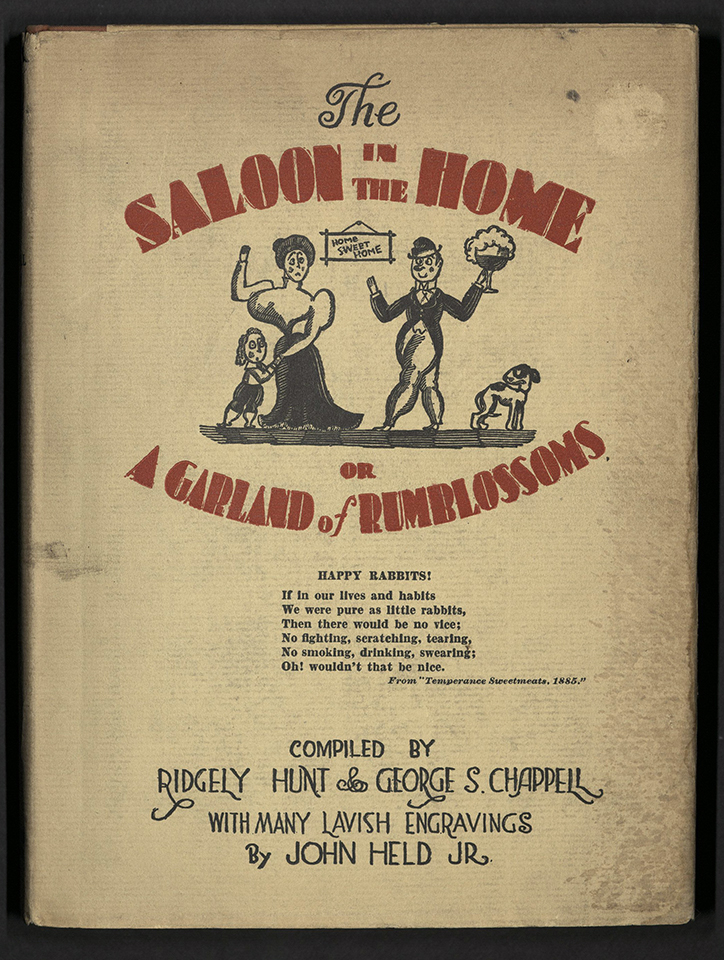 Although John Held, Jr. attended West High School, he never graduated — finding his time was better spent honing in his artistic skills, which he began at The Salt Lake Tribune as a sports illustrator from about 1905 to 1909. He was joined by his West High classmate Harold Wallace Ross, who was employed as a cub reporter. Their joint stints on the newspaper staff would become the ultimate coming-of-age stories. They would share tales of adventuring into the Commercial Street district, visiting the gambling dens, and coming into contact with the notorious Salt Lake City madams: Belle London, Ada Wilson, and Helen Blazes. Though purely naive encounters, these initiations into manhood certainly shaped the mind of the young artist, providing ample fodder for Held’s later career in commercial art.

In addition to working for the Salt Lake Tribune, Held Jr. was also a staff artist for the Salt Lake High School yearbook, Red and Black and regularly contributed illustrations to the University of Utah’s Utonian. At the age of fifteen, he had sold his first cartoon, a Western-themed one, to Life Magazine. 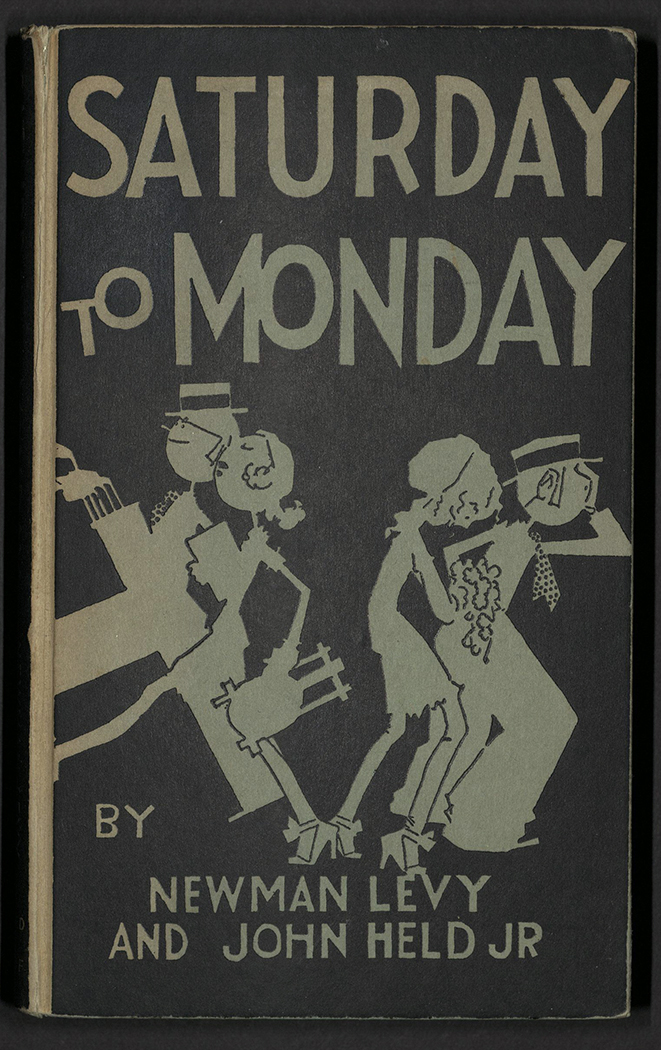 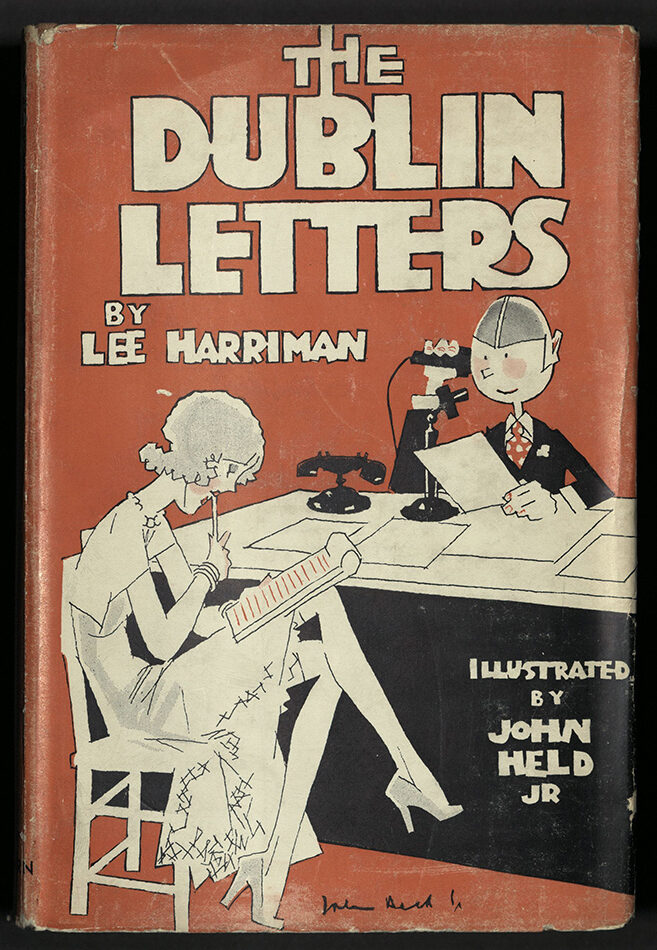 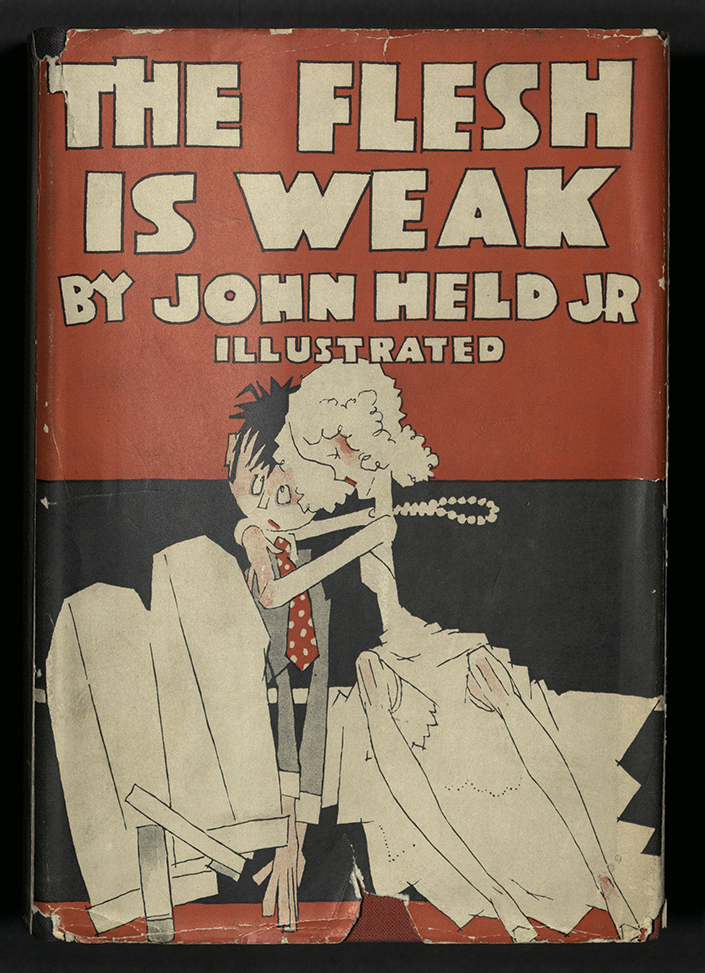 In 1910, John Held, Jr. left Salt Lake to seek his fortune in New York City. There he met up with fellow classmates, Harold Ross and Hal Burrows, along with his childhood mentor, Mahonri Young — one of Brigham Young‘s 160-odd grandsons. Ross went on to found The New Yorker magazine, Burrows became the art director at MGM Studios, and Young found his own fame as a sculptor and artist. While these connections certainly helped Held gain notoriety, it would be his own gentle satires and witty caricatures that would ignite his meteoric rise to fame. Upon arriving in New York, Held began doing freelance work: illustrations for streetcar posters, place cards, and displays for Wanamaker’s department store. In 1922, Held sold his first cover to Judge and, suddenly, he was in. He began contributing regularly to prominent publications such as College Humor, Colliers, Life, Vanity Fair, Puck, and Ross’ New Yorker. Once he gained his footing, his cartoon strips “Oh! Margy” “Sentimental Sally” “Held’s Bells” and “Rah-Rah Rosalie” became popular among the collegiate cohorts. Curiously, in view of the campus oriented drawings that were to make him famous, Held himself never returned to school or went to college. 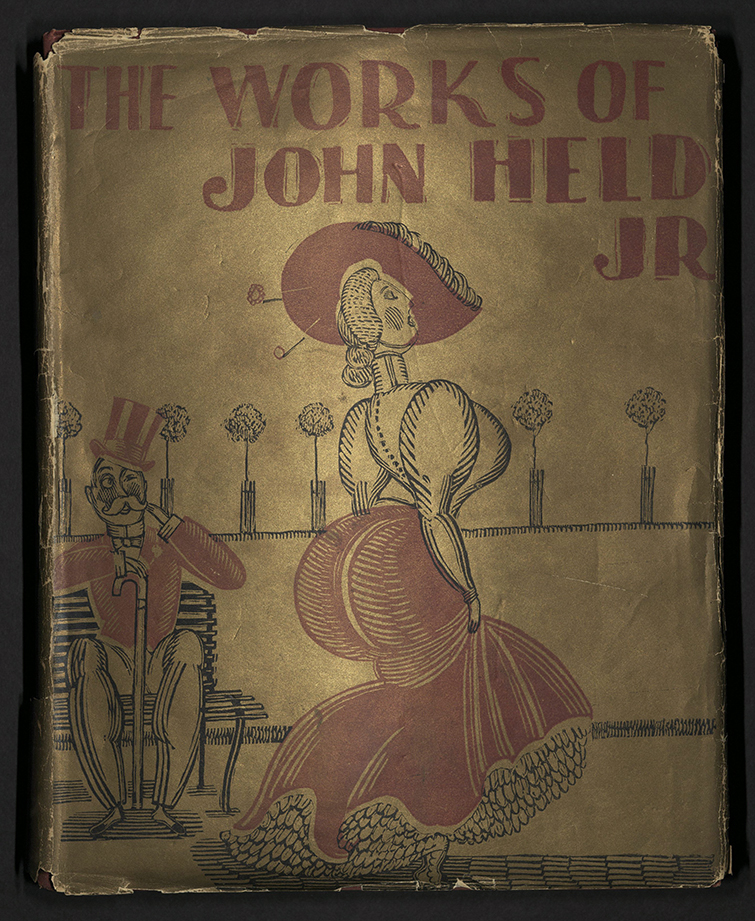 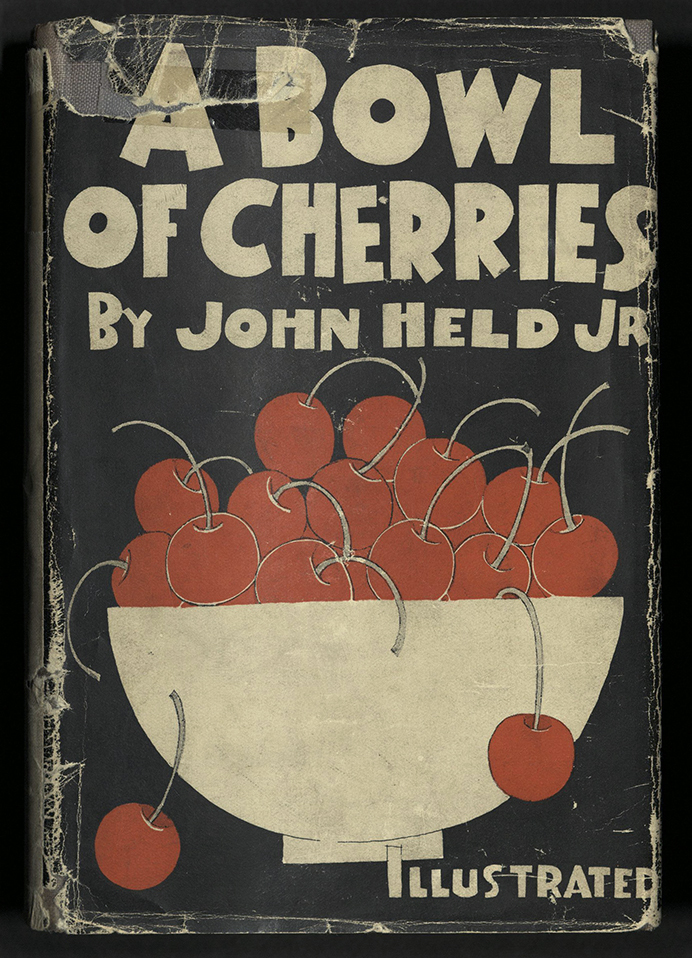 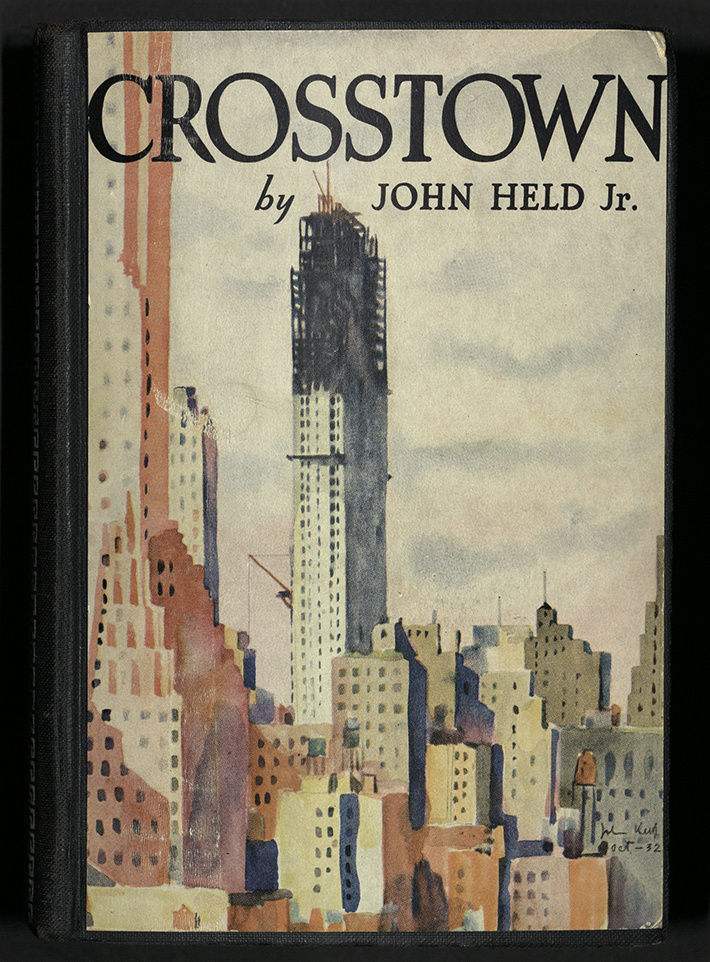 Several factors combined to escalate Held’s success. In the 1920s — before talking pictures, before radio, and long before television — magazines were in their golden age and considered to be the great mass medium for entertainment. In that decade, youth had taken over and Held was praised for his ability to illustrate the cultural paradigm shift that was occurring. His drawings depicting the Flapper Era and enduring portraits of Flaming Youth both satirized and influenced the styles and mores of the Jazz Age. Held mythologized the Roaring Twenties even as they were happening, and people adored the myth. In 1926, William Randolph Hearst contracted Held to illustrate a syndicated drawing titled “Oh! Margy,” which would later be called “Merely Margy.” Held was paid $250,000 a year from Hearst. That was on top of the additional income he was making from his other work: full pages and covers for magazines and books, fanciful maps, stage and costume designs, endorsements and advertising art for clients such as Tintex dyes, Timken roller bearings, Clark’s Teaberry gum, and Packard automobiles. He received blank checks and also engaged in “serious” art, including watercolor and sculpture. He wrote a comic ballet, illustrated author’s books, and penned children’s literature. Then, right at the height of his fame, the stock market crashed. 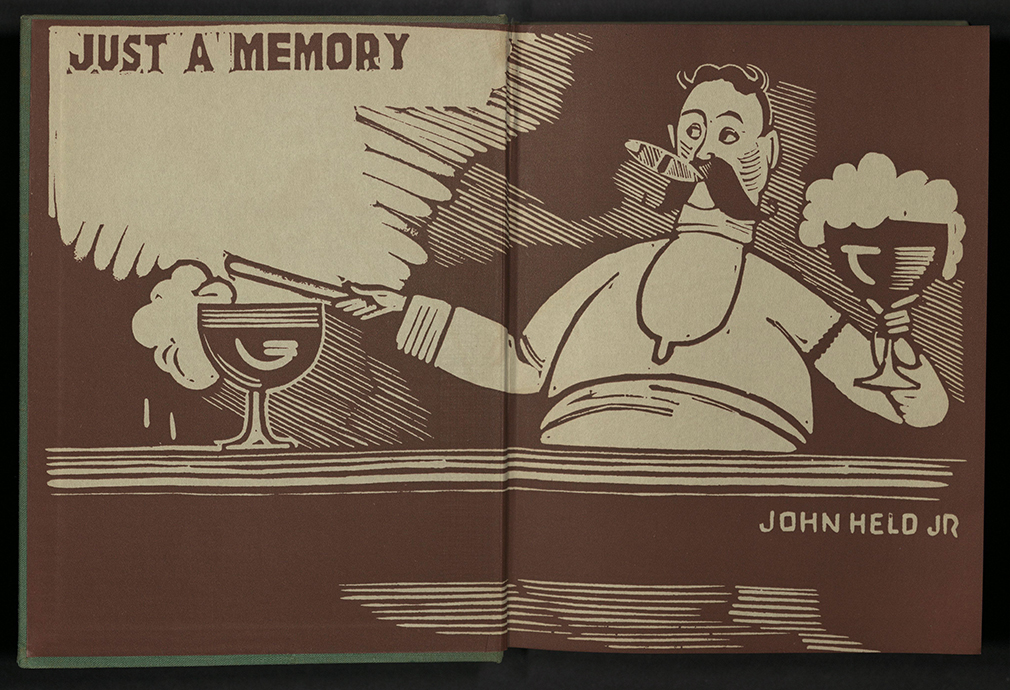 Like so many others, Held lost most of his wealth during the Wall Street Crash of 1929, which marked the beginning of The Great Depression. Within a few years, most of his art markets had dried up and the popularity of his work waned. His illustrations and paintings became somber and he turned his efforts toward writing. However, stress and exhaustion caused him to suffer a severe nervous breakdown before his first book was finished. Instead he was hospitalized. Grim Youth, his first collection of short stories, was finally published in 1930 by Vanguard Press. Although the subject matter was the same as that of his famous drawings, the point of view was surprisingly different. In prose, Held took a cool, measured look at the carefree young people he had depicted and found them not free from care at all. Instead, Held’s stories dissect pretension and describe callousness, selfishness, and cruelty. One title, “A Man of the World,” would go on to receive the O. Henry Award as outstanding short story of the year.

Held never recovered his commercial success but continued to create during the succeeding decades. He eventually settled on a farm in Belmar, New Jersey, with his fourth wife, Margaret Schuyler James. There he put a close to his tumultuous career and turbulent life and found joy and serenity — doing chores and tending to the animals, as he once did while a young boy in Salt Lake City. His feelings toward Utah and his humble beginnings were deep and unabashed. Even at the height of his fame as an illustrator, he revered his home state,

“Often in a lifetime, one looks back and reviews certain decisions with regret.
Of the many decisions I have made, good and bad, there remains one important decision that I have never regretted,
that of being born in Zion, Territory of Deseret.”

For more John Held, Jr. resources, see the collection of illustrations located within our manuscripts department.