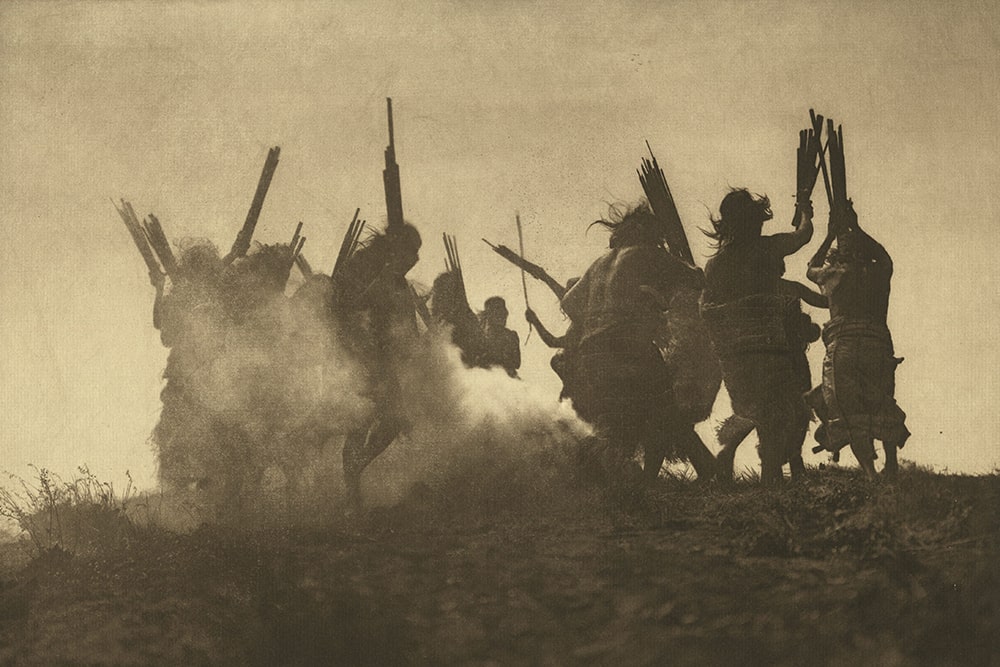 A showcase of Edward Curtis’
The North American Indian

“It’s these early contacts, as a young man, with Native people that really crystalizes his interest in Native Americans and it is out of that, that his major work evolves, which is the opus, The North American Indian,” explains Jake Homiak, Director of the Smithsonian Museum’s Anthropology Collection. Homiak is describing the work of Edward Curtis, the photographer renowned for capturing hundreds of images of Native Americans at the turn of the century.

Curtis’ 30-year career, funded by the likes of J.P. Morgan and endorsed by Teddy Roosevelt, was spent traversing the American West on horseback. Curtis’ intention was to document every major tribe west of the Mississippi, portraying what he perceived to be a vanishing culture.

Carrying glass negatives along with large format cameras and all items necessary to survive the elements, Curtis and a robust team of interpreters, researchers, and assistants visited more than 80 indigenous tribes. What resulted was a portfolio of 2,232 luminous photogravure images of American Indians, taken between 1890 and 1930, expertly printed and contained in 20 volumes entitled The North American Indian.

Through a special allotment of funds, the Marriott Library acquired the Edward Curtis volumes and plates in 1937 for a total of $3,500. Earlier this year, a 20-volume quarto set of The North American Indian reached $895,000.00 at Santa Fe Art Auction. Only 272 copies of Curtis’ work were published between 1907 and 1930, making it one of the most expensive undertakings in the history of book production.

“While Edward Curtis was neither the first nor the last person to photograph the indigenous tribes of the American West, he was certainly the most prolific,” explains Lyuba Basin, Rare Books Curator. “His monumental publication presented to the public an extensive ethnographic study of numerous tribes and cultures.”

In addition to documenting through photographs, written records were made and some language was captured on wax cylinders.

The Curtis collection can be viewed by requesting an appointment with Special Collections, but will also be on view for an exclusive showcase in the Rare Books Classroom on Thursday, November 18, 4:00 – 6:00 PM. Space will be limited to 40 people and reservations will be required. Please RSVP by emailing Lyuba Basin at lyuba.basin@utah.edu .

Additionally, Shadow Catcher: The Life and Work of Edward S. Curtis by Laurie Lawlor can be accessed through Special Collections.